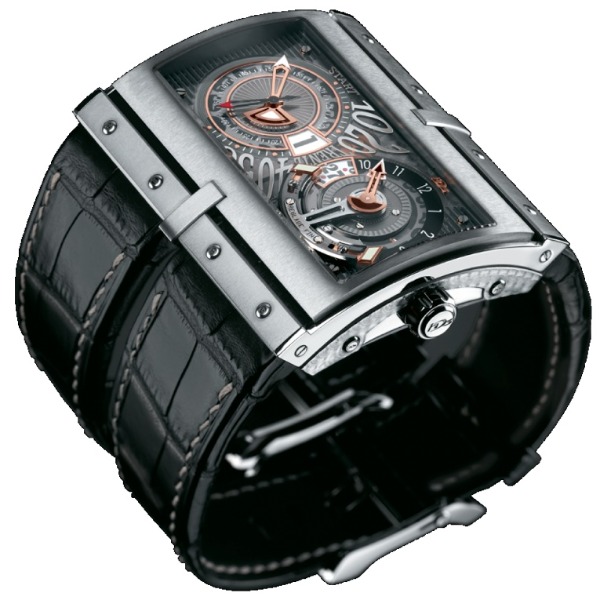 This watch represents a very rare breed. I believe the HD3 Hidalgo XT-2 (AKA Idalgo XT-2) was introduced in about 2006 and is one of the rarer HD3 models. This fascinating watch is a new relic. Something that might not have seen the light of day if it was introduced as a concept now. What you have is a testament to what happens when high-design meets high-end watchmaking and high-end machinery – on a smaller independent scale. The watch is the brain-child of HD3’s designer Jorg Hysek and Fabrice Gonet. This watch came out when it watch makers freely admitted their creations where “crazy.”

The watch essentially is a “double-wide” version of the HD3 Hidalgo XT-1. They wanted to make a larger watch with more going on. Of course there is a lot of visual similarity between the Hidalgo XT-2 and the MB&F Horological Machine Number 2. Surprising? Not really? Fabrice Gonet is also one of the “friends” at MB&F (Max Busser & Friends). The world of crazy cool high-end timepiece is a small one. I believe the original MB&F HM2 came out in about 2008, so the Hidalgo XT-2 would have predated it by a couple of years. I think it goes without saying that MB&F’s HM2 was the more successful piece from a marketing standpoint. 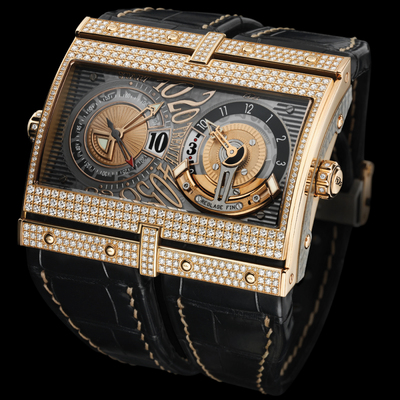 The Hidalgo XT-2 came in a gold (with other metal I believe) case that was 65mm wide by 52mm tall (and 15mm thick). The case actually was curved to go over your wrist. In true HD3 fashion, it had “double straps.” For me the watch case is cooler than the dial. I am not sure if the watch has one or two movements, but I do know that it is one of the first, or the first attempt by HD3 to move beyond and existing movement to modify something. The XT-2 movement is based at least one Swiss ETA 2892 automatic (I believe it is just one movement). Of course, there is a lot added to the movement as well. What you have are two time dials, and each is done in a totally different manner. 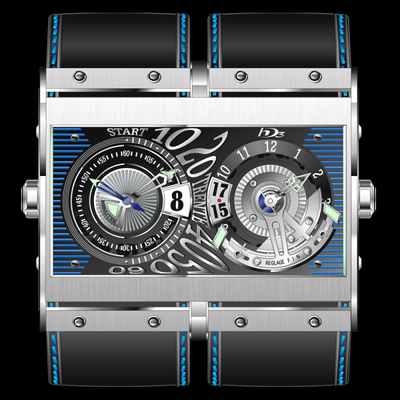 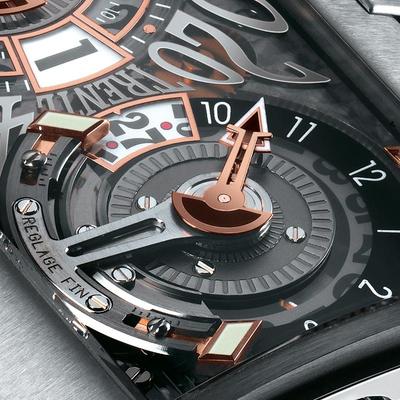 The dial on the left has a retrograde minute and seconds hand, with a jumping hours window at 3 o’clock. The dial on the right has an hour and minute hand, as well as the exposed rotors (yes rotors) for the movement that spin around. The right dial also displays the date. You have to ask yourself how much MB&F (or at least Fabrice Gonet) was inspired by this watch?

Style-wise the dial is interesting. Certainly weird. The dial is made up of a semi-transparent piece that might be sapphire, with applied decorative elements on it. This gives you a sort of view of the mechanics underneath. In the middle, between the two dials, are Arabic numerals that look smooshed together – which used for the retrograde minutes hands. To be amusing  HD3 included “trente” for 30, and “start” for 0. 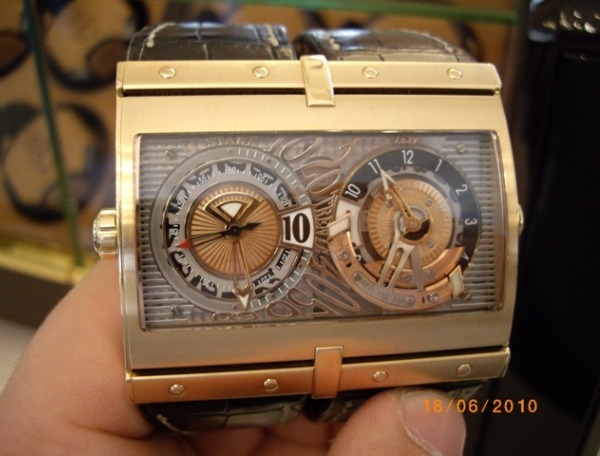 It gets more crazy. Look closely and you’ll see that there are two rotors – a smaller inner rotor, and a larger outside rotor that looks to have a variable geometry function. That latter function, employed differently, is now common on most Richard Mille timepieces. What amazes me is that this wild watch has so many interesting parts that are now common place on some of today’s most popular high-end sport/tech watches. Maybe we can call the HD3 Hidalgo XT-2 a pioneer of sorts? Original price for the HD3 Hidalgo XT-2 was about 160,000 Swiss Francs. There is one on James List here for about half of that.