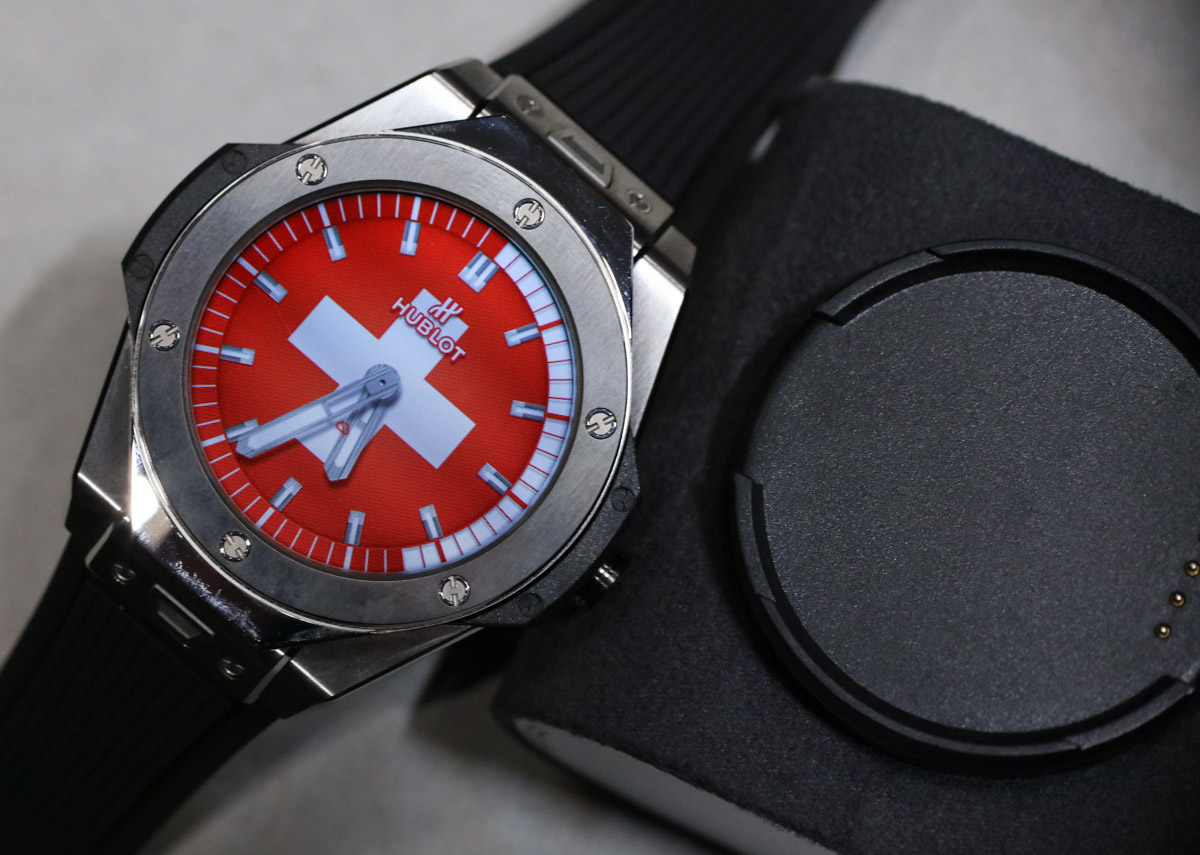 Who knew some good-old – and intelligently done – product placement could prevail over a long-standing heritage of condescending and/or irrelevant marketing? Hublot did. According to FIFA, the last World Cup had a global in-home television audience of 3.2 billion people, with some 1 billion having watched the final. Beyond the usual suspects of fizzy drink brands, sports gear manufacturers, airlines, motor oil producers, and so on, Hublot made sure the comparably minuscule and obscure Swiss luxury watch industry was also prominently represented during all of the World Cup, including the Final. The 2018 FIFA World Cup Russia™, as it’s officially called, is no different, with Hublot extending its role in the game with the Hublot Big Bang Referee Smartwatch from the 2018 FIFA World Cup Russia.

Not just another billboard on the side of the pitch, in 2014 Hublot was the brand highlighted on the referee’s board every time a substitution was made or extra time was announced – two elements of soccer that actually do tend to provoke powerful reactions from the game’s know-it-all fans the world over. For 2018, that board remains, but now the referees get to wear a piece of Swiss smart watchmaking as well, with the Hublot Big Bang Referee Smartwatch. Let’s not beat around the bush: it is essentially a re-branded and re-structured TAG Heuer Carrera Connected, dressed in the recognizable Hublot case with its uni-lug structure, round bezel, and so on. It’s also powered by a new operating system that caters to the needs of the game and its more or less capable adjudicators. 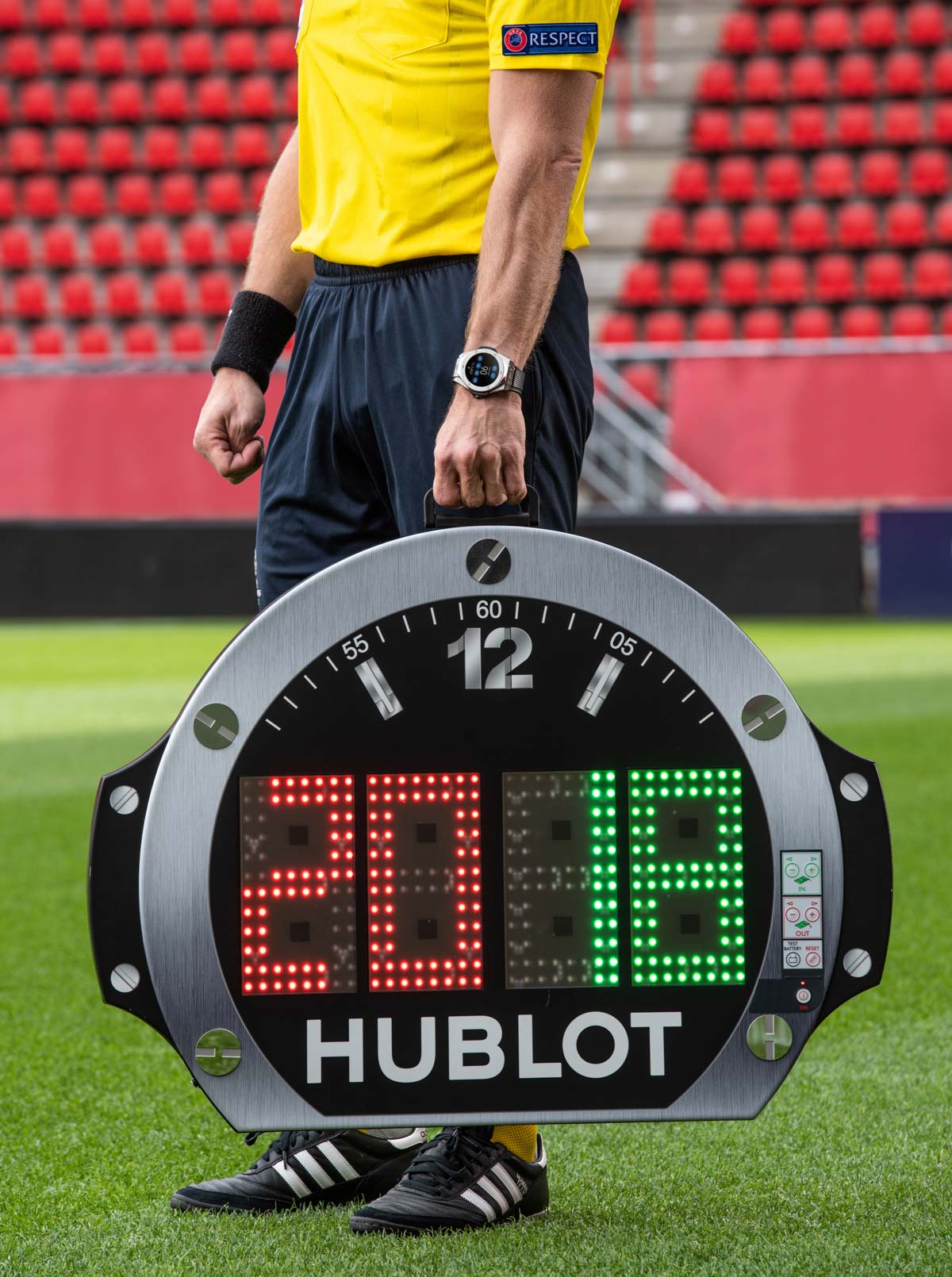 Sure, major Swiss brands – well, basically only Hublot and TAG Heuer at this point – producing a capable smartwatch is quite a bit of news in itself, but there is a more important point to be seen here, something that – and I’ll go out on a limb and say this – is deeply appreciated by even the more moderately responsible/open-minded of Swiss luxury watch brand CEOs. Why? Because developing and marketing such a product is a massive PITA of the hot & spicy, long-lasting type, and because dedicating one’s efforts to going through it all yields great benefits to a Swiss luxury watch industry that has hysterically bad struggles with reaching a younger audience. 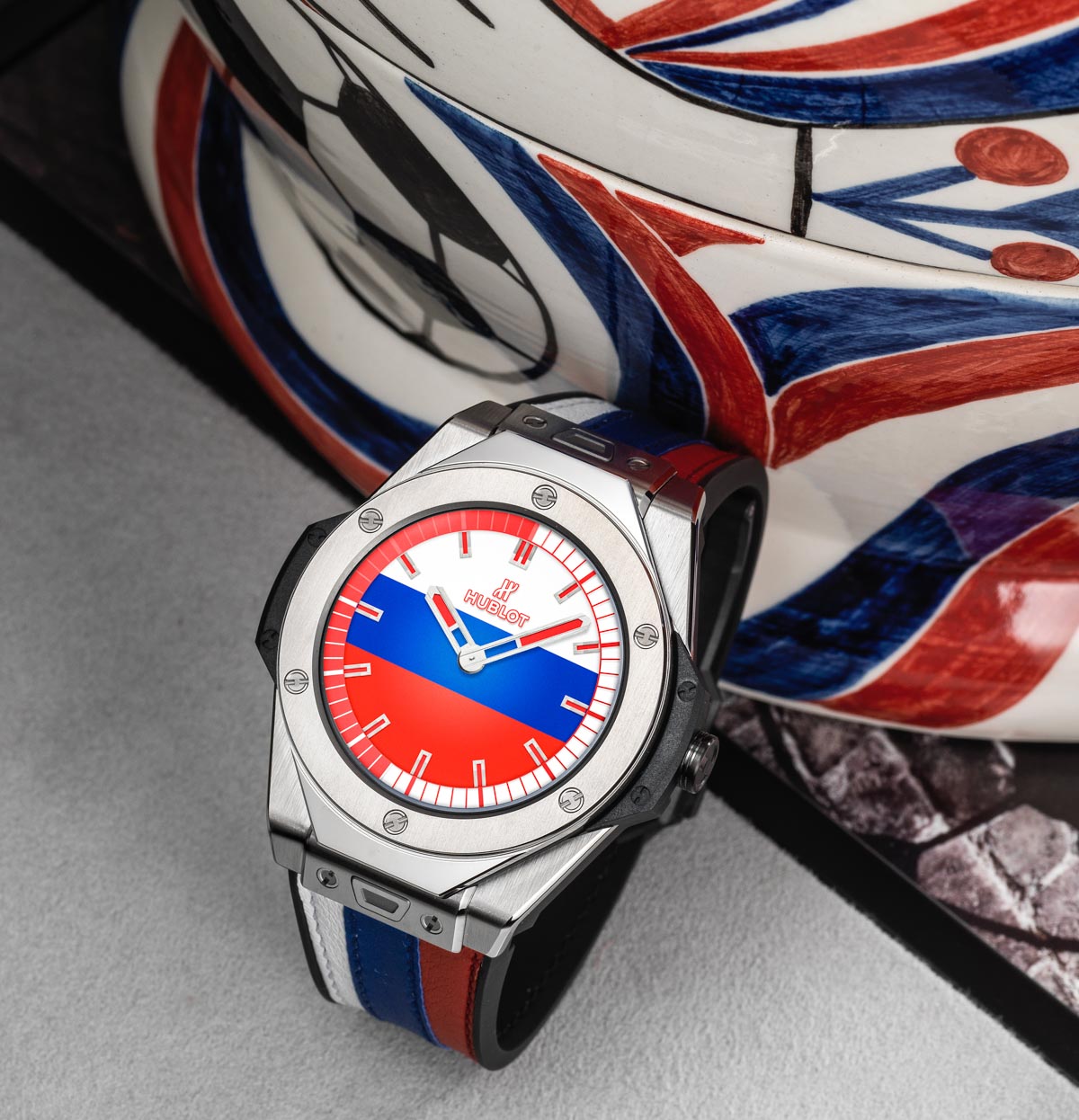 Think about it. How many major players are there in the global watch industry that have a global marketing strategy and outreach? Rolex with Formula 1 and the sheer gravity of its name, Hublot with Ferrari, Formula 1 until recently, the FIFA World Cup, and a vast number of smaller and larger separate ventures, Omega with its continuous, high-quality campaigns on social media and… You tell me how many more you can think of – stressing a global marketing strategy and outreach. In essence, the world can learn about some of the most meaningful and highest quality items a man can own through only a handful of brands. 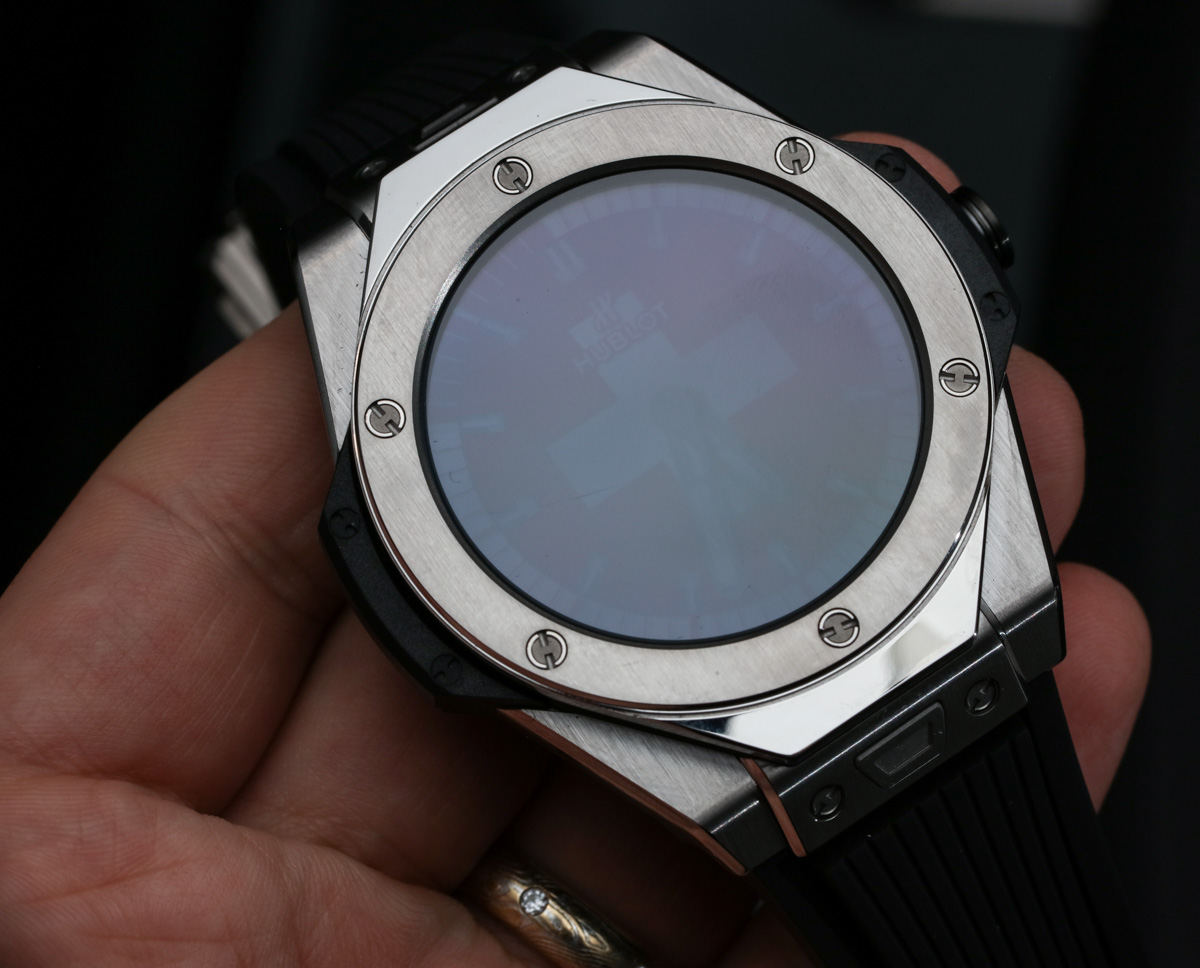 Photo taken with a powerful off-camera flash, that’s why you can’t see the screen.

On a personal note, I am yet to experience a smartwatch that I’d want to live with on a daily basis, and I know many of you fellow watch lovers feel the same way. But for the watch industry to stand a chance in the long run it needs to be able to tirelessly seek a way to attract a yet newer generation of watch lovers – and when Apple and G-Shock, or the “I’ve never worn a watch in my life” attitude rules, that’s a tough one. 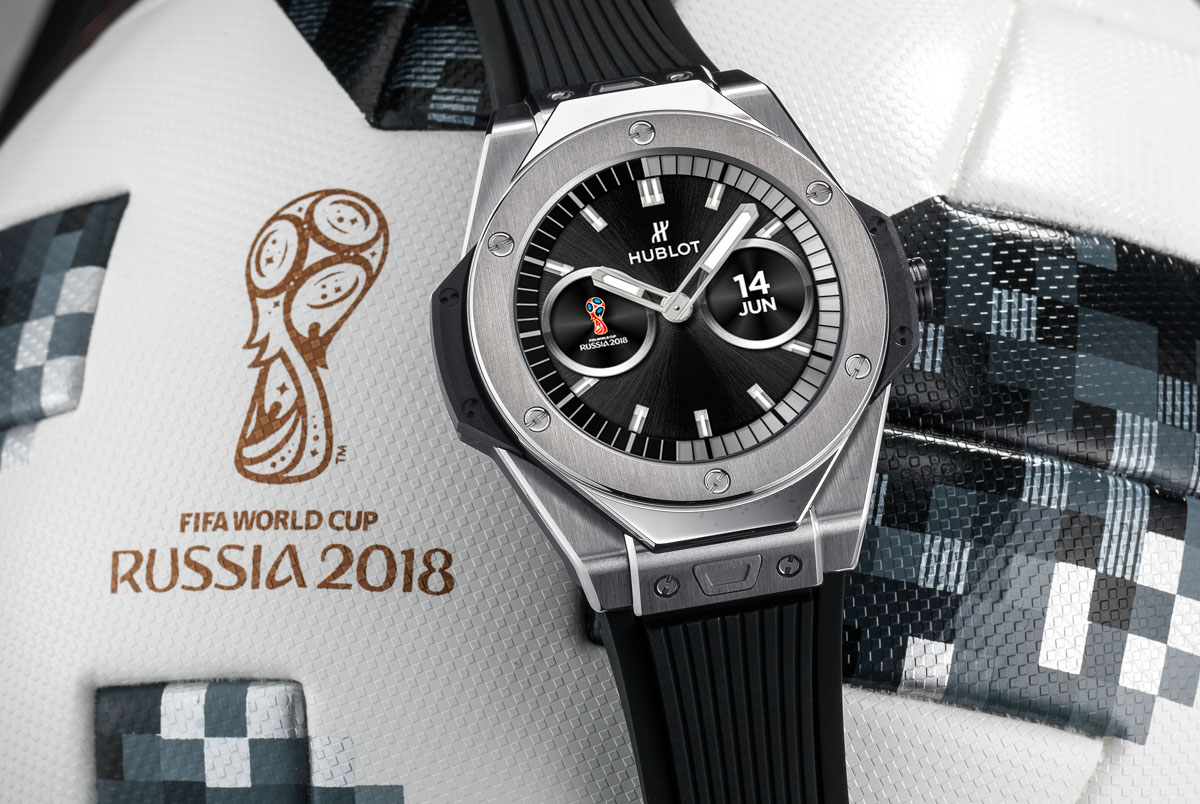 While I’d be endlessly amused to watch the referees try and negotiate high-intensity situations of the World Cup while fiddling with a double tourbillon mechanical goal counter totally-illegible-breaks-all-the-time World Cup 2018 watch, I guess I’ll have to swallow this bitter pill and accept the fact that if the Swiss watch industry is to be powerfully represented at all during the World Cup, it needs to happen through a smartwatch – by a big brand.

That’s what’s happening now with the Hublot Big Bang Referee Smartwatch that is 49mm wide, 13.90mm thick, has a WR rating of 5 ATM (I guess an IP rating as is normal for smart devices would have made more sense here), is crafted from fancy-finished titanium, has an ATOM Z34XX processor (not that anyone cares), accelerometers and gyroscopes, even GPS, and a haptic motor and… 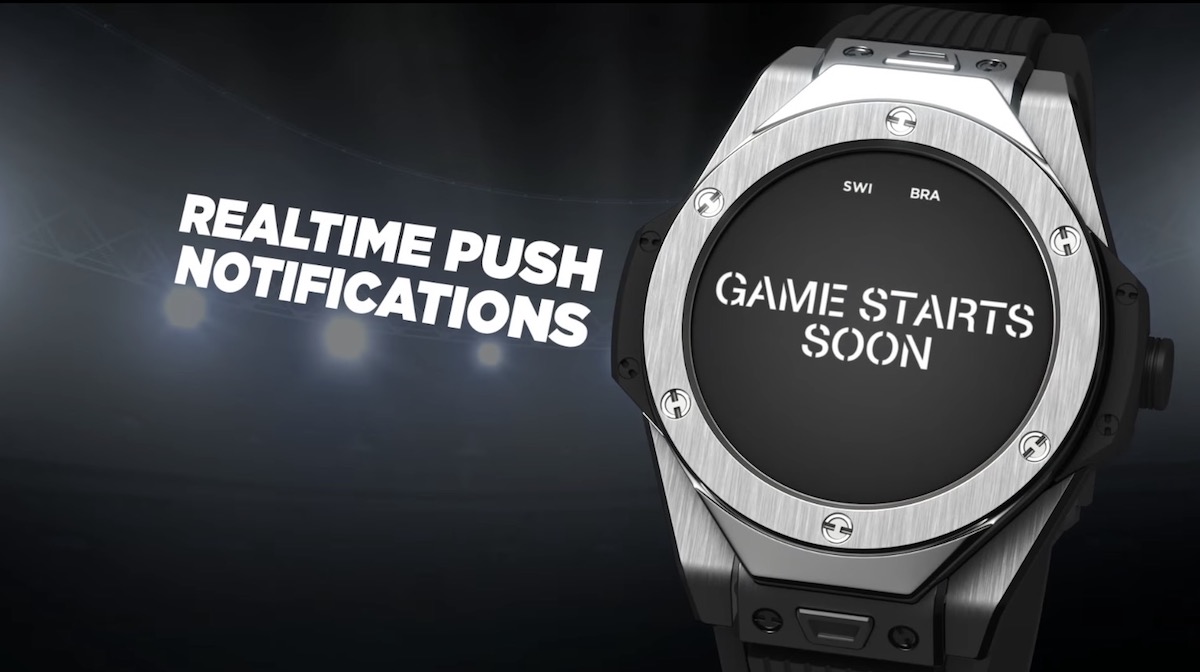 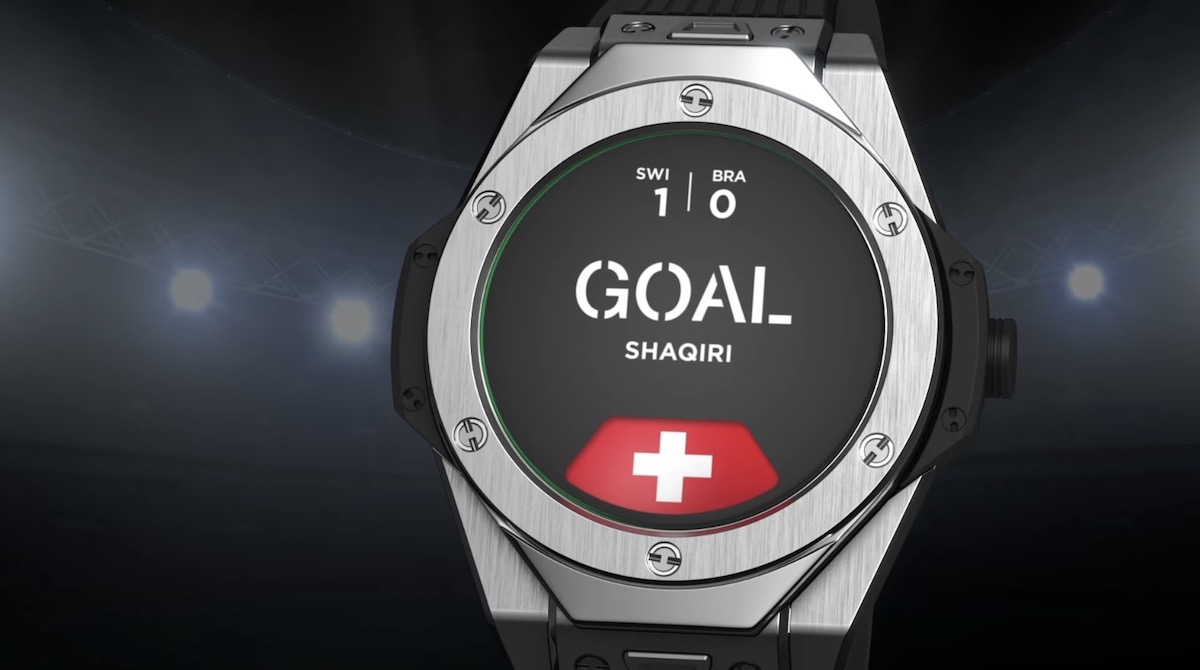 …Oh yeah, it comes with a clever operating system too – and not just for the referees. While I believe the referees can fiddle with the watch, time the match, and perhaps log other notable happenings, what I’m more fond of is how Hublot went all-in with the possibilities here and produced an OS that is actually capable of bringing fans (who wear the watch) closer to the game itself. The watch sends push notifications to the wearer about games starting soon, live updates on the matches, and other cool stuff – even the Hublot main page features a Hublot Big Bang Referee Smartwatch with a screen sharing live updates and such, just like the actual watch would. 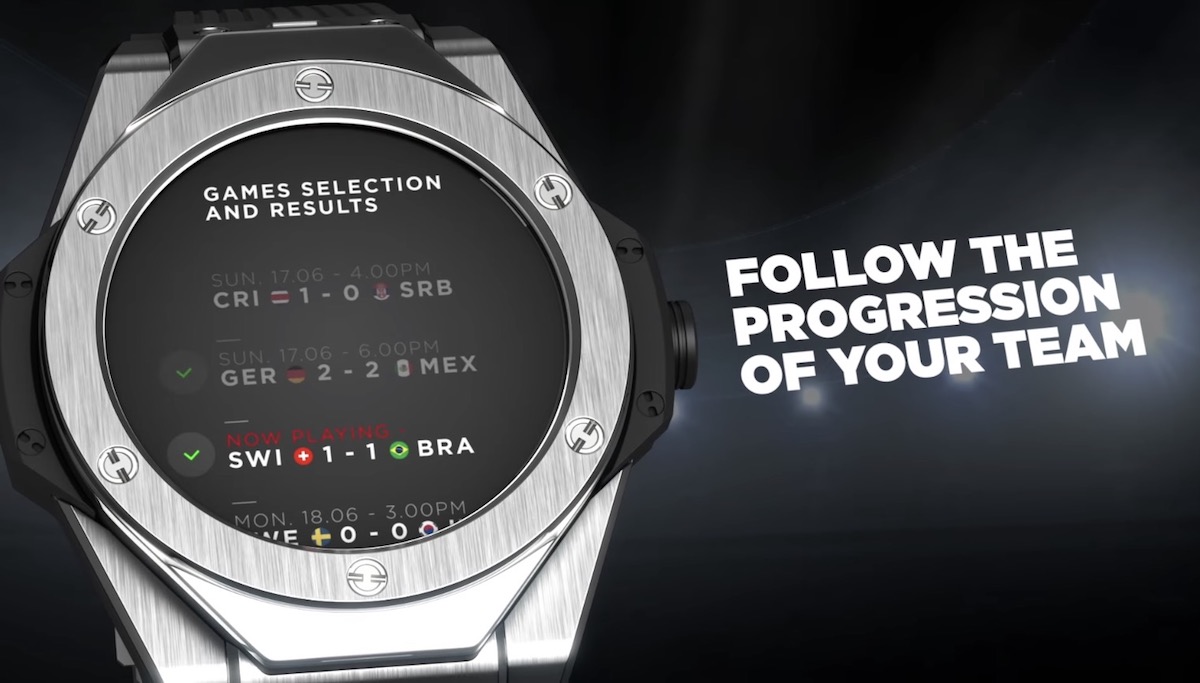 The fact that this isn’t just your average co-branded watch with a boring logo engraved on the back is already refreshing – and the extent to which Hublot has gone to make this into as complete and impactful a package as possible is something we normally only see from tech giants like Samsung and Apple. Insane amounts of energy must have gone into the planning and execution of this “World Cup package” that involved getting these watches ready and on the wrist of referees, as well as organizing the brand’s extended presence at the World Cup. I guess I’m sounding more impressed than I should – but that wouldn’t be the case if such exercises weren’t so few and far between in our industry. 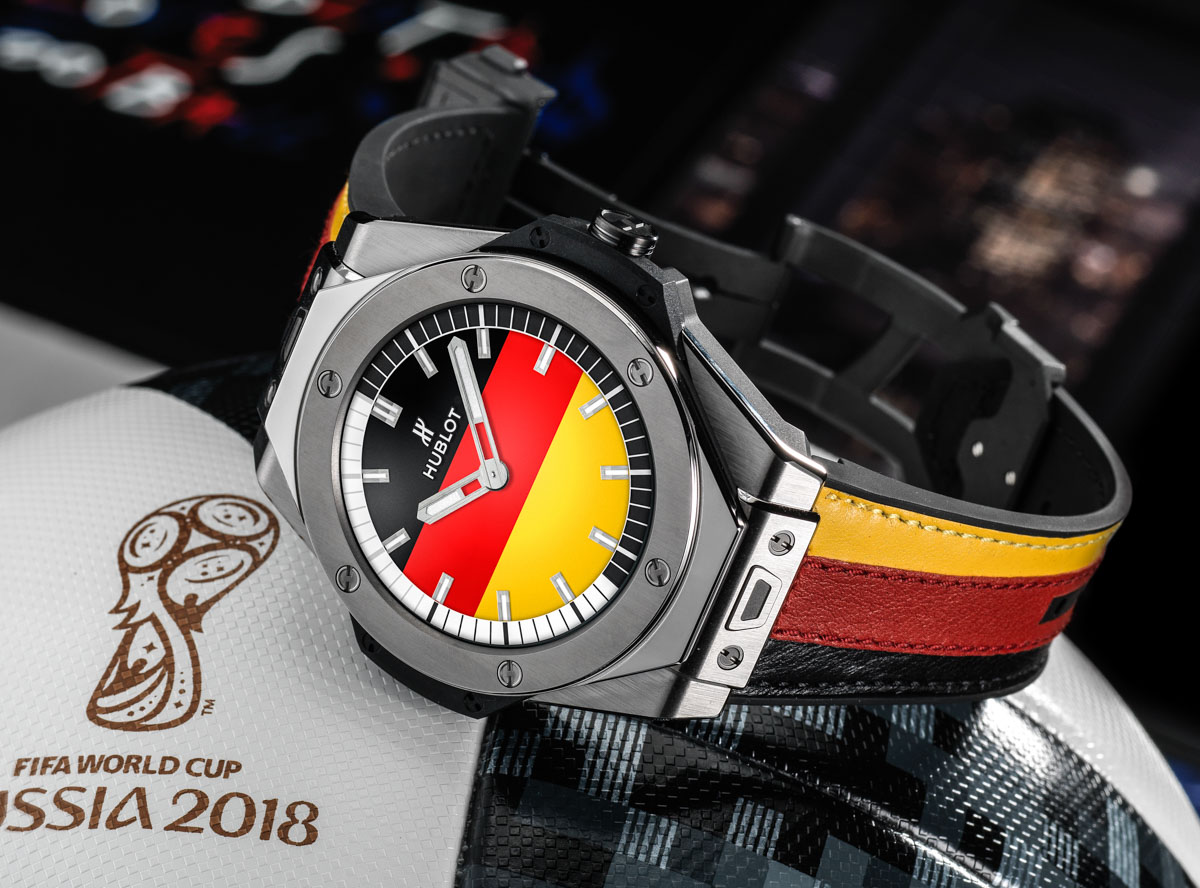 Packed with the option to customize the dial and even the straps, Hublot has tried all it can to make this new piece appeal to the – admittedly more wealthy – soccer fans. The real icing on the cake that I can report from the approximately 20 minutes of World Cup broadcast I endured (as a result of numerous shorter sittings) was how most all coaches and “soccer celebrities” just off the pitch during matches are wearing Hublot. Sure, footballers are known to rock other brands as well, but the World Cup is just full of Hublot. 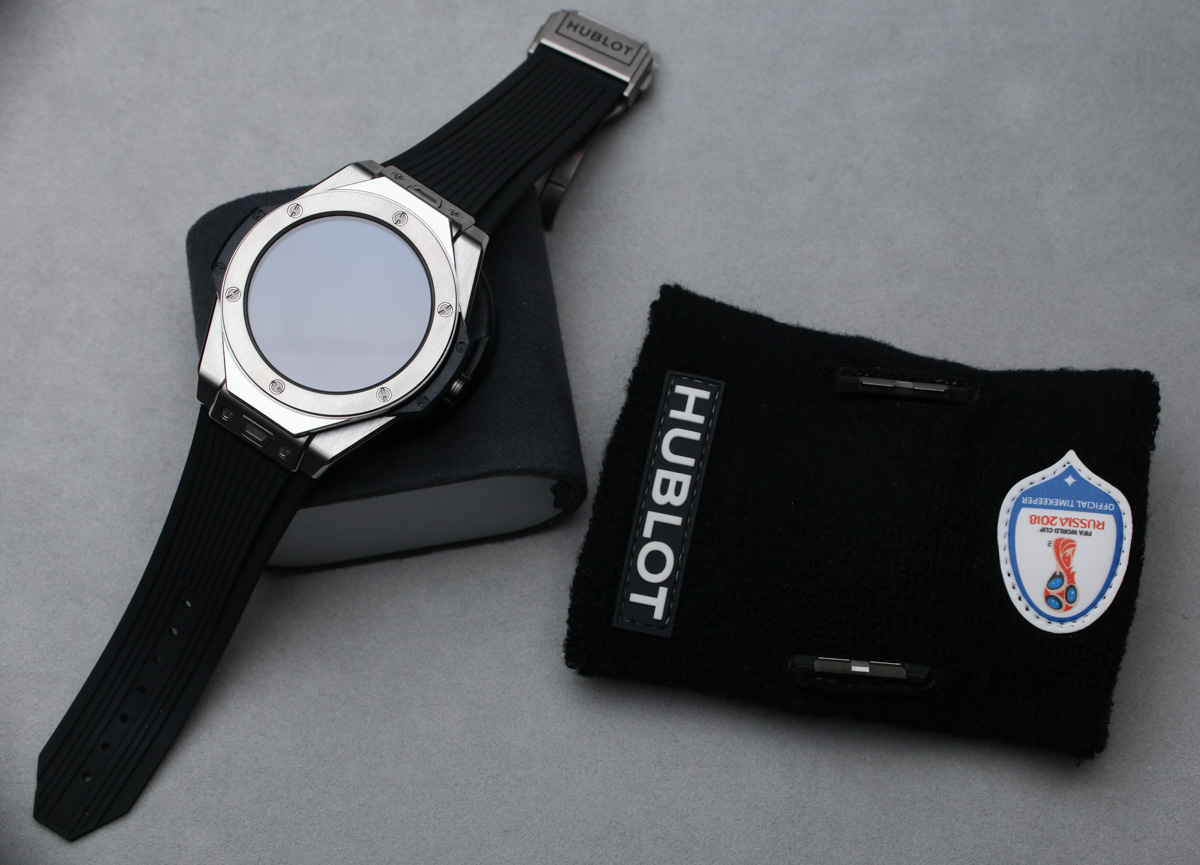 And that, I think, is overall a good thing for watchmaking. Less of an impact will be made by the weird sports wrist wrap (or whatever it is officially called) that referees attach the Smartwatch to during matches – using Hublot’s one-click system. 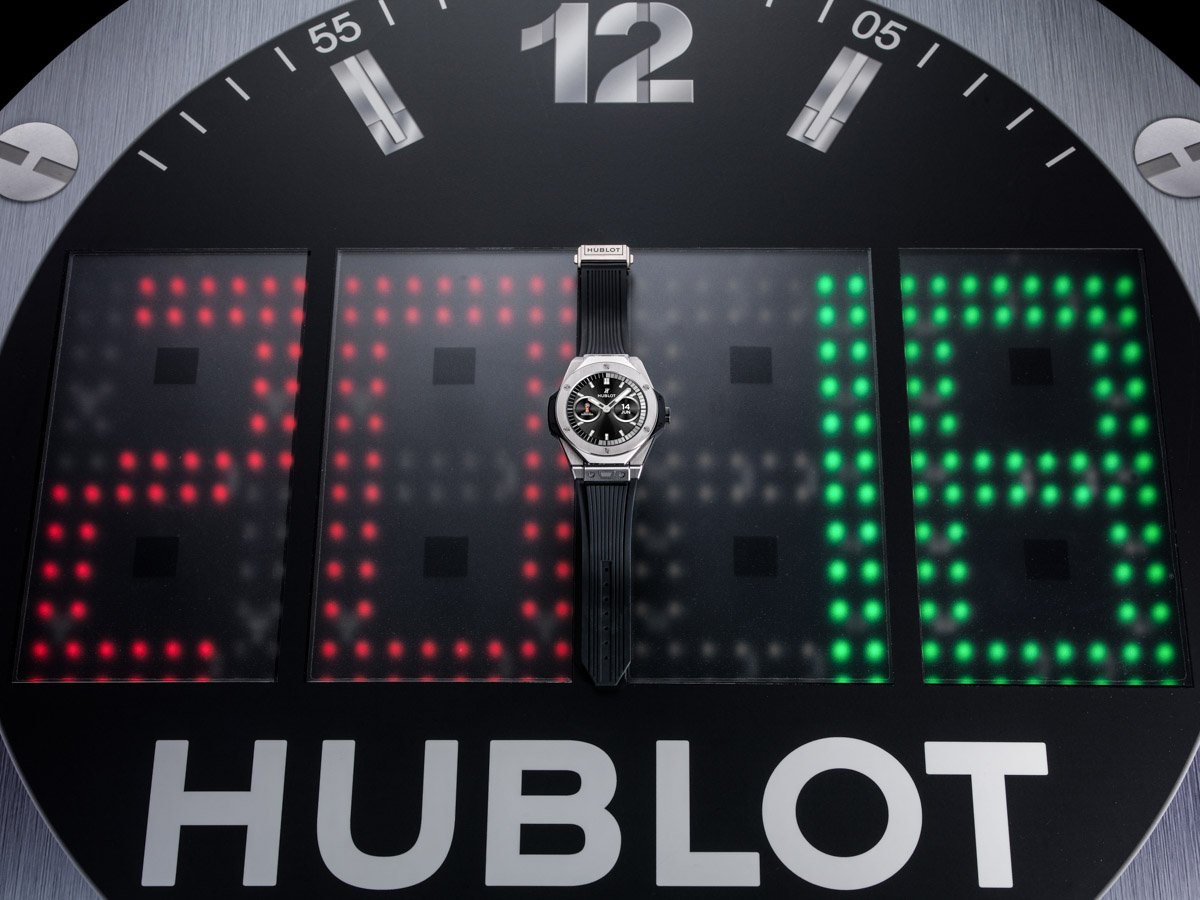 As impressed as I am by Hublot’s powerful presence during the World Cup, I remain indifferent at best about smartwatches – but that I am sure will change for many in the world during these weeks, as some football fans will convert and purchase this bold offering in the heat of the world championship battles. With a claimed day’s worth of juice and a full charge attainable in 1 hour and 50 minutes, plus a high resolution (287ppi) screen and titanium case, the Hublot Big Bang Referee Smartwatch actually is an impressive feat in smart watchmaking – if that’s a thing.

Price for the Hublot Big Bang Referee Smartwatch is $5,200. hublot.com