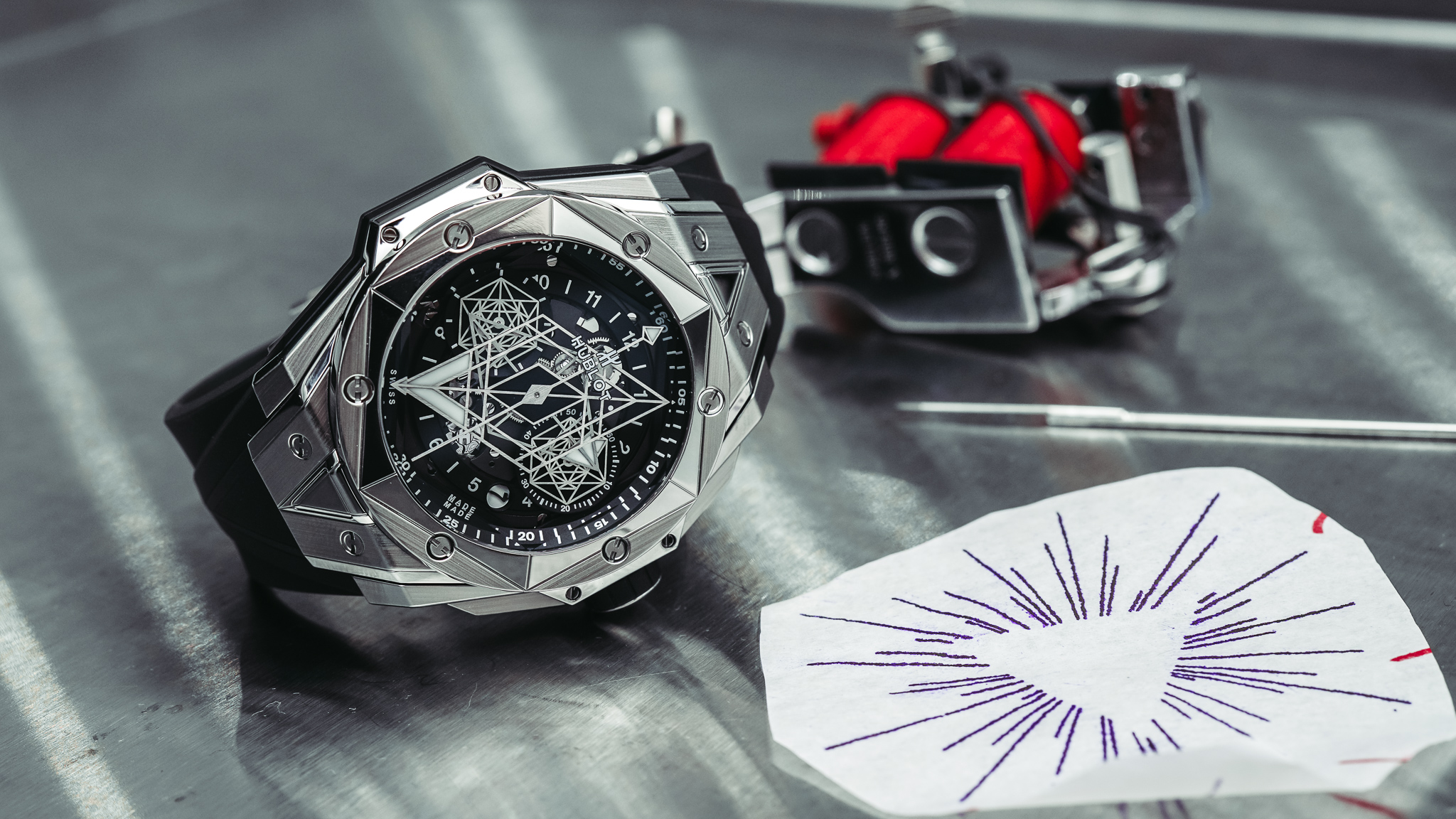 Getting Tattooed with Hublot at Sang Bleu 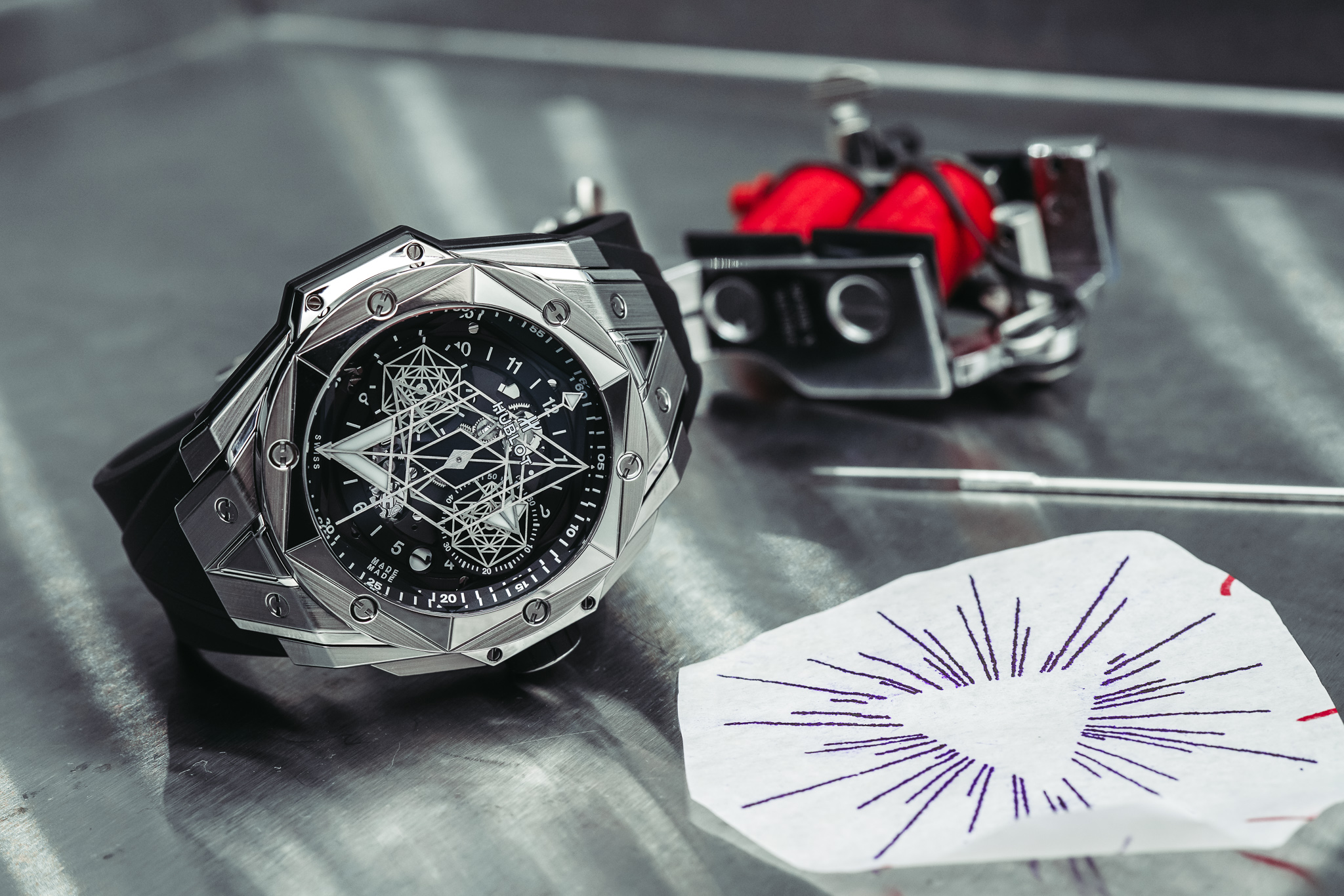 Brand partnership watches are rarely good, but can you really blame them? All too often, these co-branded goods are the by-product of a calculated marketing effort whose primary aim is reaching a new audience, rather than actually creating something interesting that adds to the existing conversation. Now in its second iteration, the Hublot Big Bang Unico Sang Bleu watch remains a sterling example of just how to make a compelling co-branded product: toss the traditional marketing books in the trash, and build something from scratch. 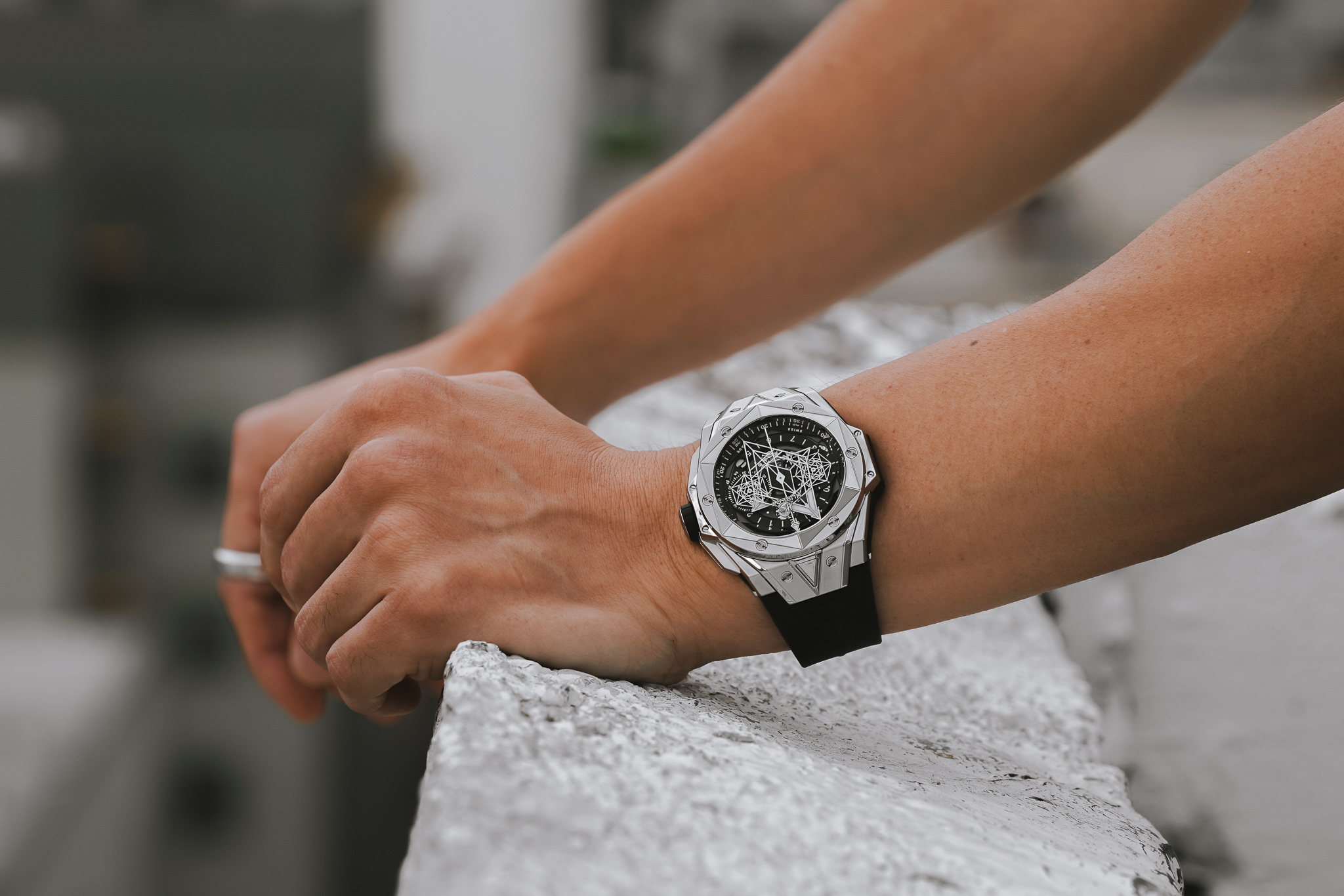 As I exited the elevator and entered the recently opened Sang Bleu studio in Los Angeles, my ears pricked up at the familiar cacophony of thumping house music and tattoo machines buzzing like cicadas on a hot summer afternoon. I wasn’t there with an appointment, but my skin tingled, anyway — a Pavlovian response to a decade or so spent in and out of shops like this one, though it’d been a little over three years since my last session. Tattoos, as they say, are extremely addictive — especially under the creative eye and steady hand of a talented artist like Swiss native Maxime Plescia-Büchi, who founded the Sang Bleu creative agency in 2006. 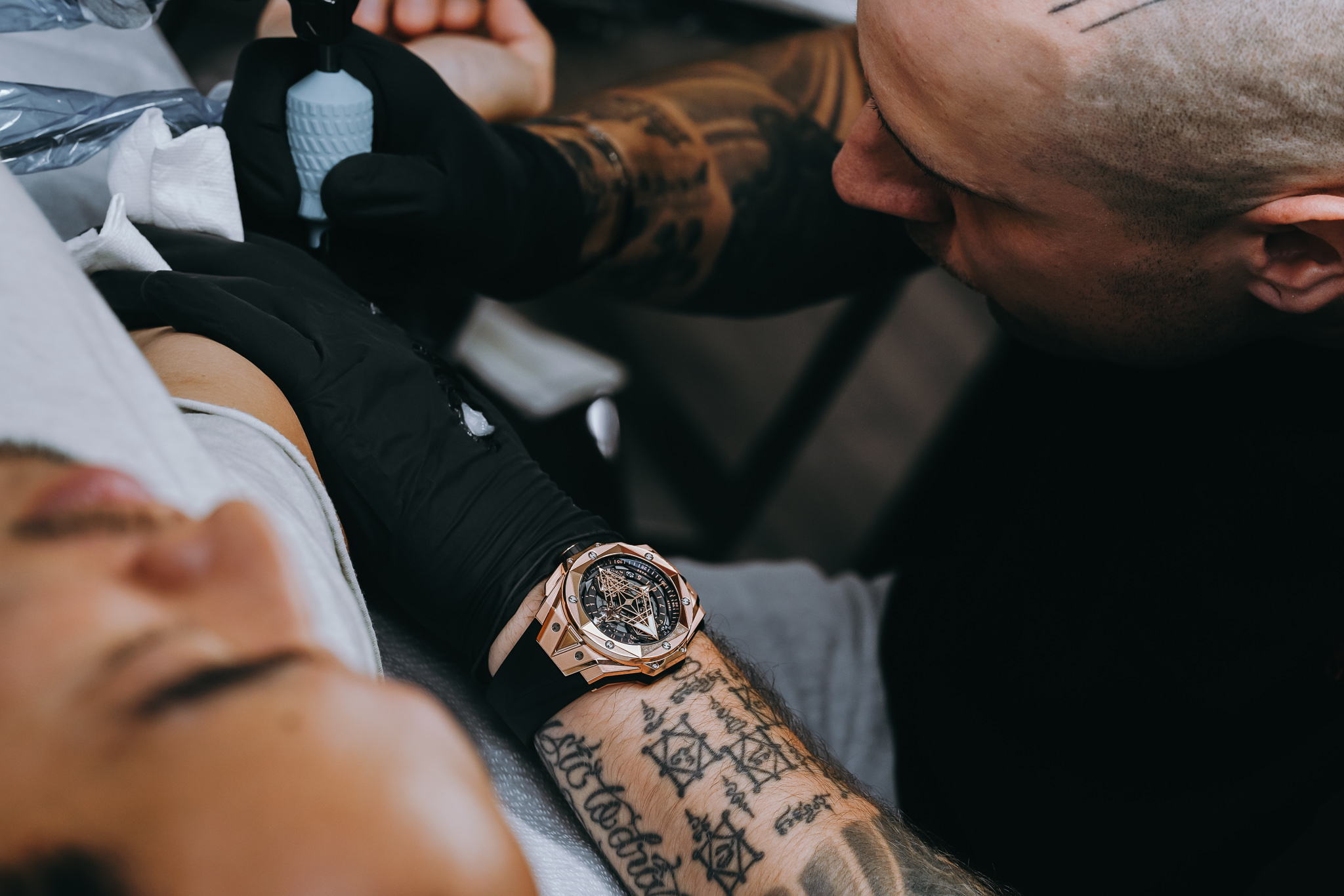 High above Skid Row in a brightly lit rooftop studio space, the new downtown L.A. tattoo parlor is Sang Bleu’s third branch — joining the Zurich and London locations, all of which book quickly and well in advance. In a little over a decade, Maxime’s growing body of work has crossed over from the tattoo world’s gritty counter-culture and found mainstream appeal using originally designed runes and symbolism inspired by the Sacred Geometry (geometric figures used by many ancient cultures in various forms of art, literature, and architecture) and the clean, symmetrical lines from Da Vinci’s Vitruvian Man. But Maxime isn’t just another Hublot ambassador, for whom the brand might grant an exclusive colorway with some precious gems on the bezel and an etched caseback. Quite the contrary. Just as he did back in 2017 with the first edition of the Sang Bleu (one of Hublot’s most successful editions to date, according to the brand’s North American President Jean-Francois Sberro), Maxime again approached the collaboration from scratch, opting to design an entirely new Big Bang watch that didn’t just bear his signature artwork but one that incorporated it into the very architecture and mechanical functionality of the watch itself. 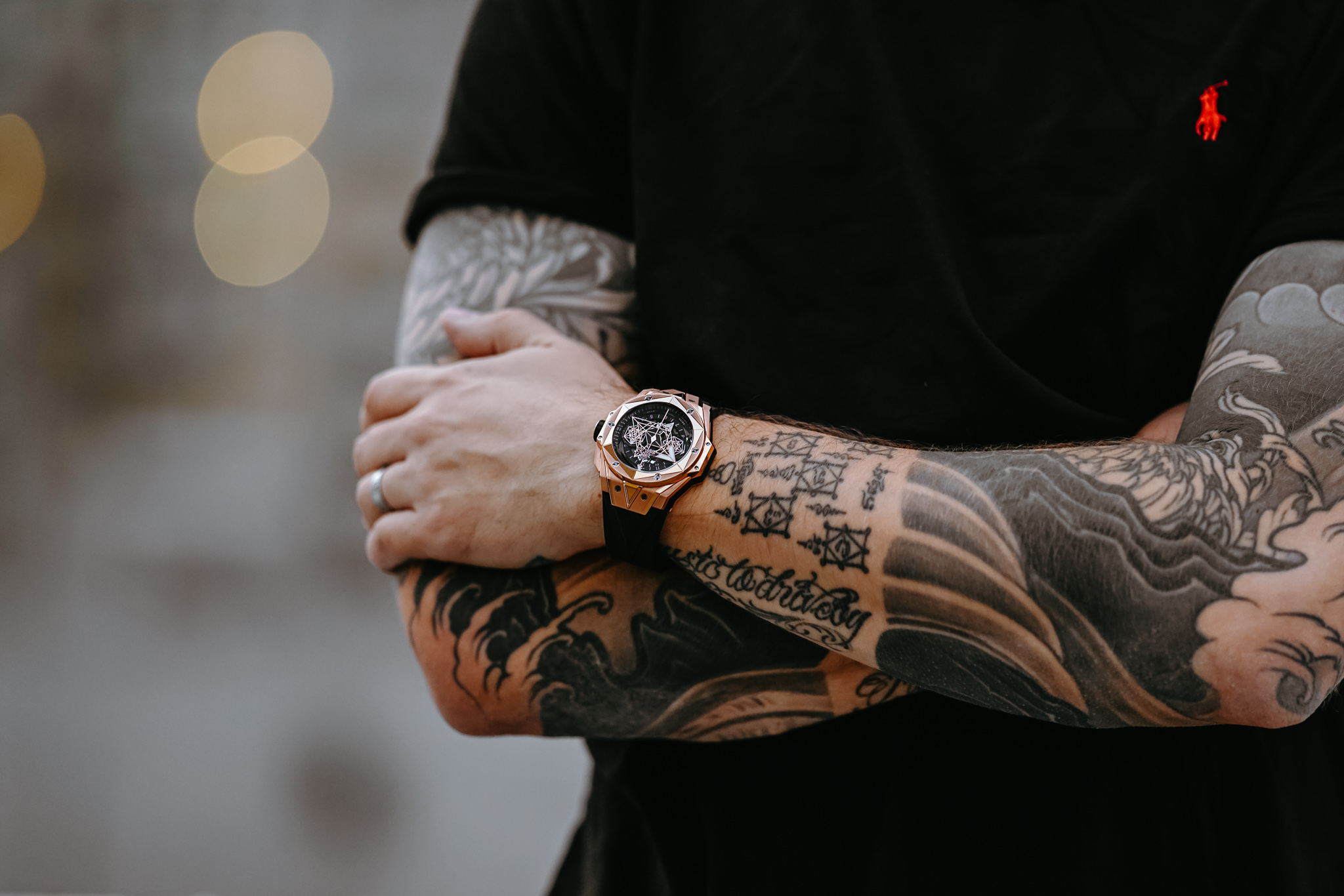 This time, the design brief called for a chronograph — and though the Sang Bleu II is a Big Bang in name, it shares very little from a design standpoint with any other Big Bang in the collection. Like most Big Bang chronographs, it is built around Hublot’s HUB1240 Unico manufacture flyback movement, which is characterized by column wheel actuation and a bi-compax register layout. And like the Sang Bleu I, this iteration’s time display is rendered in a series of rotating skeletonized discs designed to resemble Maxime’s unique polygonal art style. 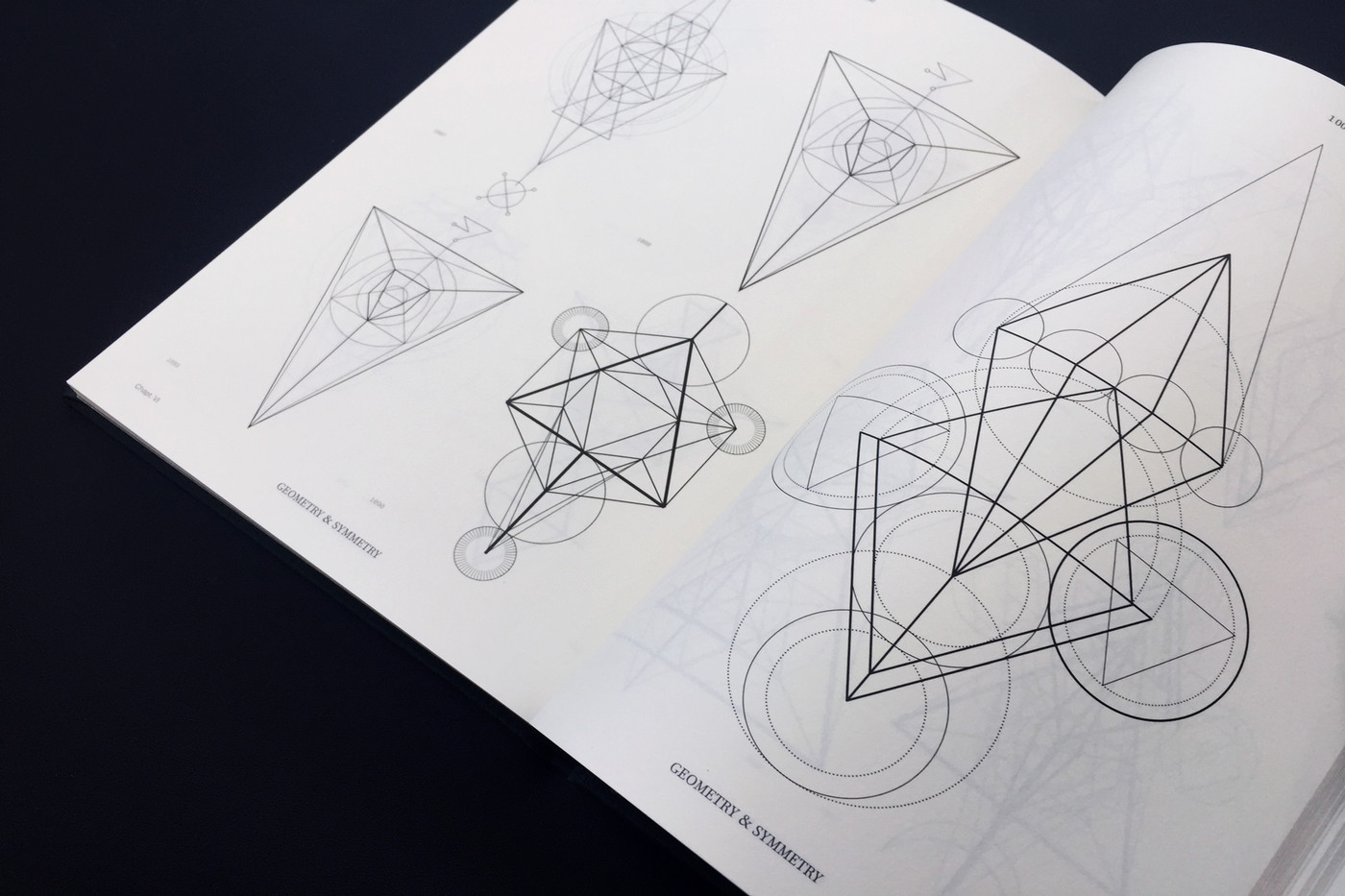 Some of Büchi’s original tattoo artwork

As David noted in our original hands-on impressions of the watch, given that there are now four discs rotating in concert when the chronograph is actuated, it’s an awful lot to take in at a glance. If you look closely, you’ll notice a luminous cardinal point on each disc (except for the running seconds counter at 9 o’clock) that points to the time in a traditional sense – but training your eyes where to look does take a little bit of getting used to.

Time display aside, the brunt of the updates to the Sang Bleu are in the design of the 45mm case and hexagonal bezel (which is matched to a wild new facetted sapphire crystal), both of which exhibit bolder, more aggressive facets and deeply carved angular channels than the previous iteration. Even the addition of a chronograph complication does little to increase the thickness here, which tops out at 16.5mm — modulated greatly by the deeply curved silhouette on the wrist. 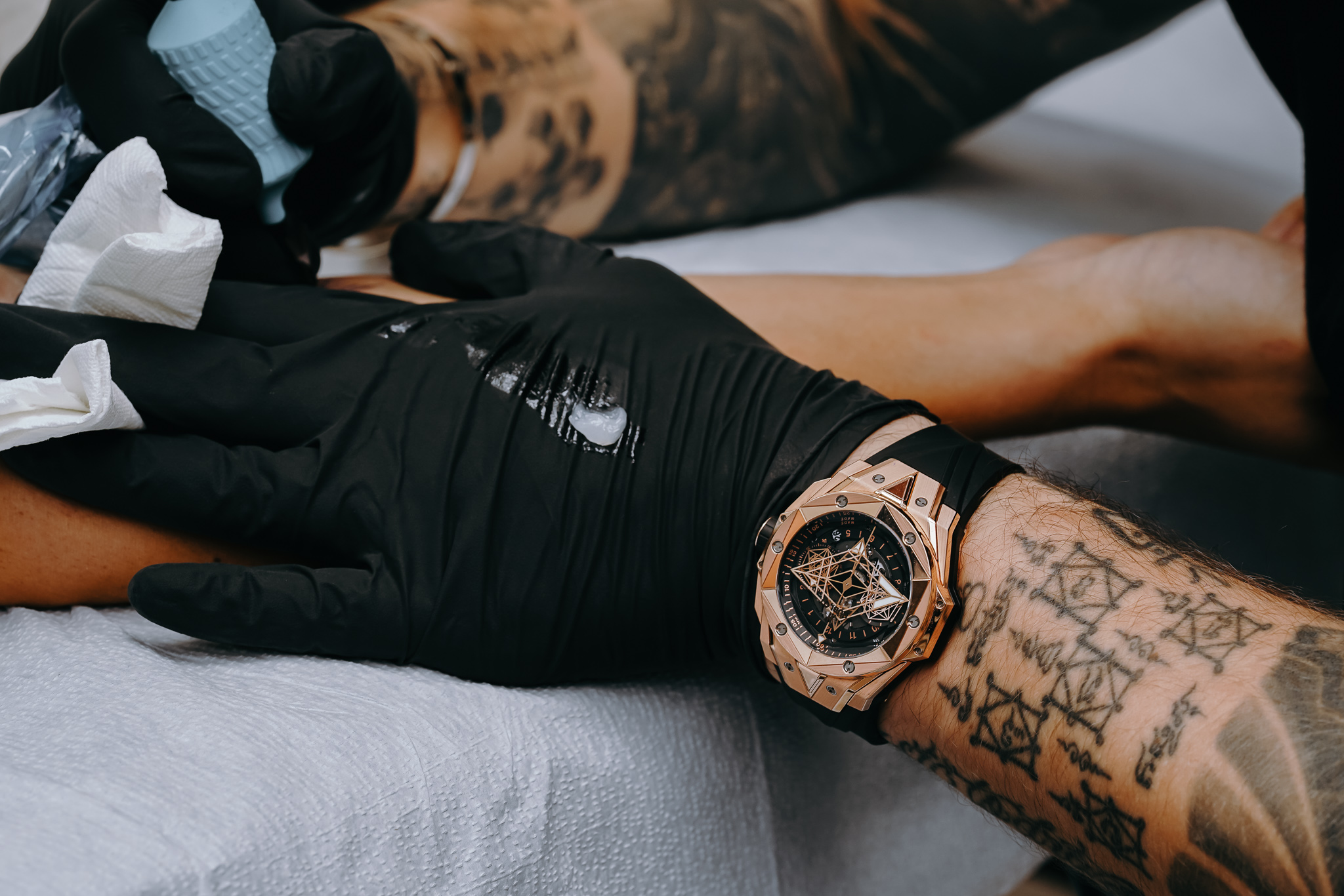 Make no mistake – this Sang Bleu sequel is hardly a palette swap or the retrofitting of a chronograph movement into an old case:  This is a totally new watch in a brand new case, re-drawn by Maxime who, once again, incorporated his own signature style into original technical drawings of the Big Bang case. He made an emphatic point to note the dramatic difference between the work that goes into actually designing a watch and simply “styling” a watch with a new dial or case finish — as many brands are wont to do with such collaborative limited editions. 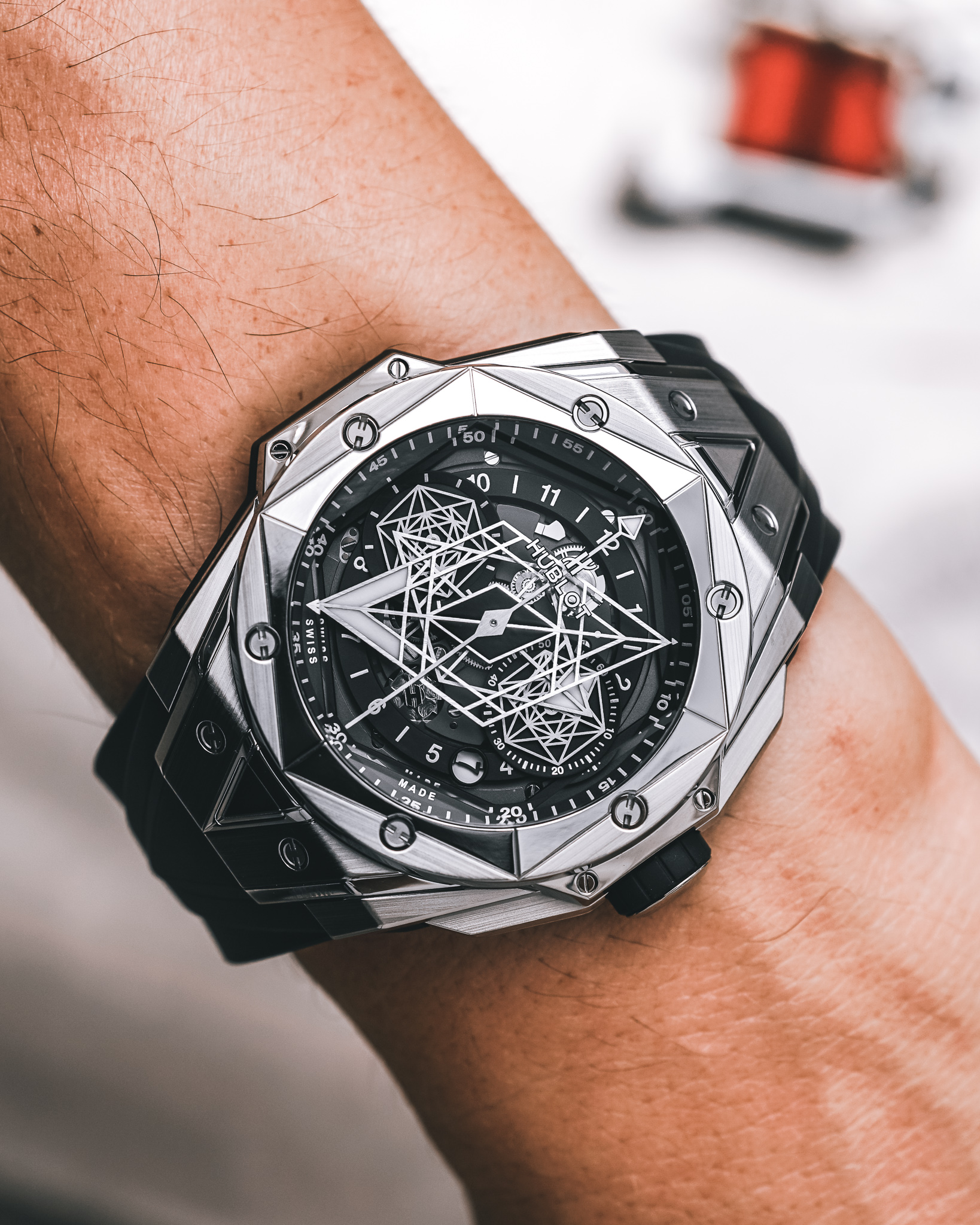 It’s a totally new watch but one that still looks and feels very much like the original — and given the runaway success of the predecessor, this is a very good thing. It should come as little surprise, though — the proof is in the passion of Maxime’s work, which comes from the perspective of a true, dyed-in-the-wool watch aficionado who appreciates the complexity and romance of mechanical watches just as much as he understands minute details like strap interchangeability and lug shapes and how their orientation can yield a product that’s as much fun to wear as it should be to behold. This particular detail is crucial with the Sang Bleu II, as its 45mm case is far from small. But the combination of a lightweight titanium case, molded rubber strap integration, and modest lug-to-lug distance ensure a watch that’s as much contemporary art as it is a strikingly wearable statement piece for tattoo and watch fans, alike. 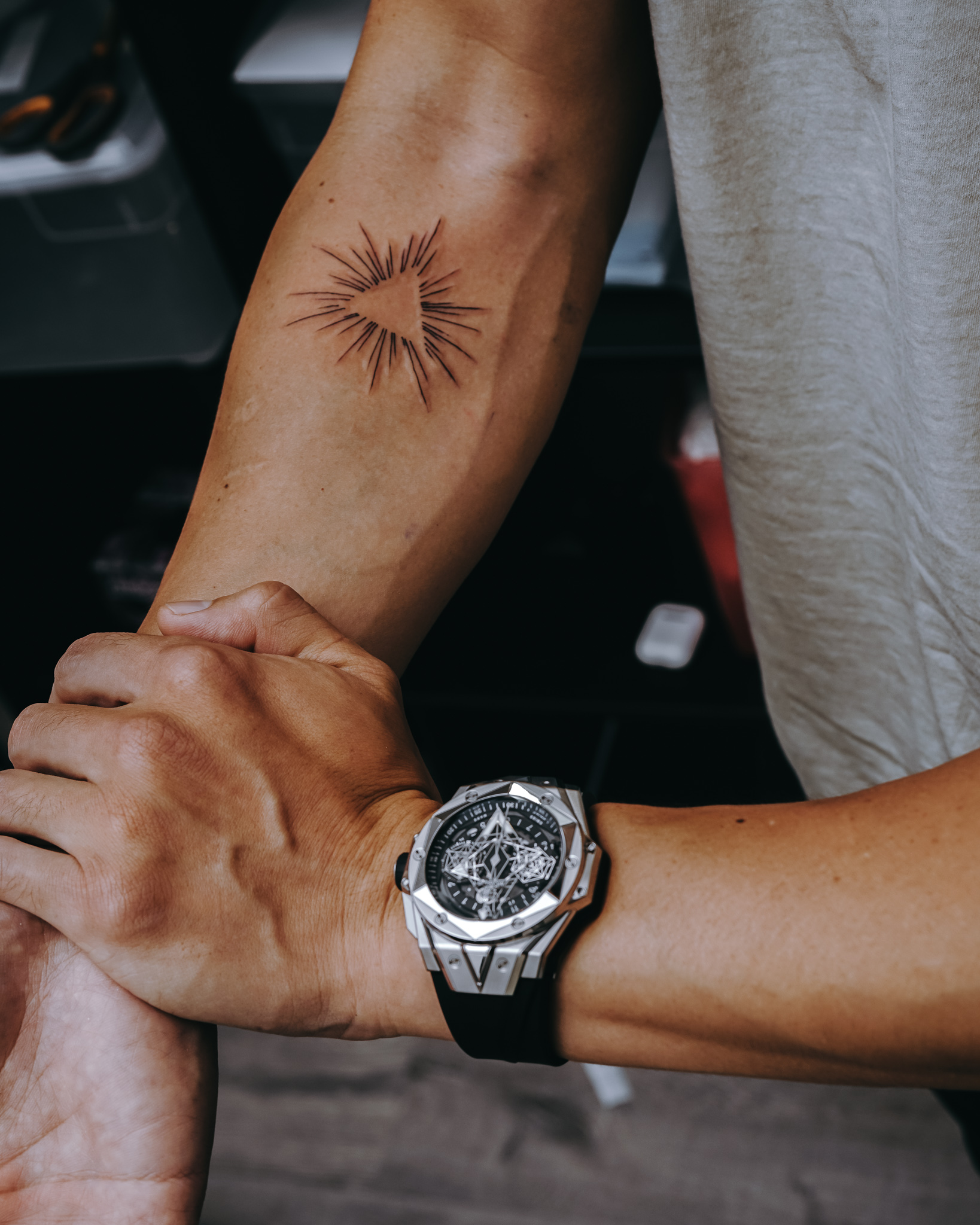 Limited to 200 pieces for the standard titanium variant, the Hublot Sang Bleu II starts at $25,000, a price that jumps to $47,000 for the 100-piece limited edition King Gold variant favored by Maxime Plescia-Büchi. For more information, head over to hublot.com. 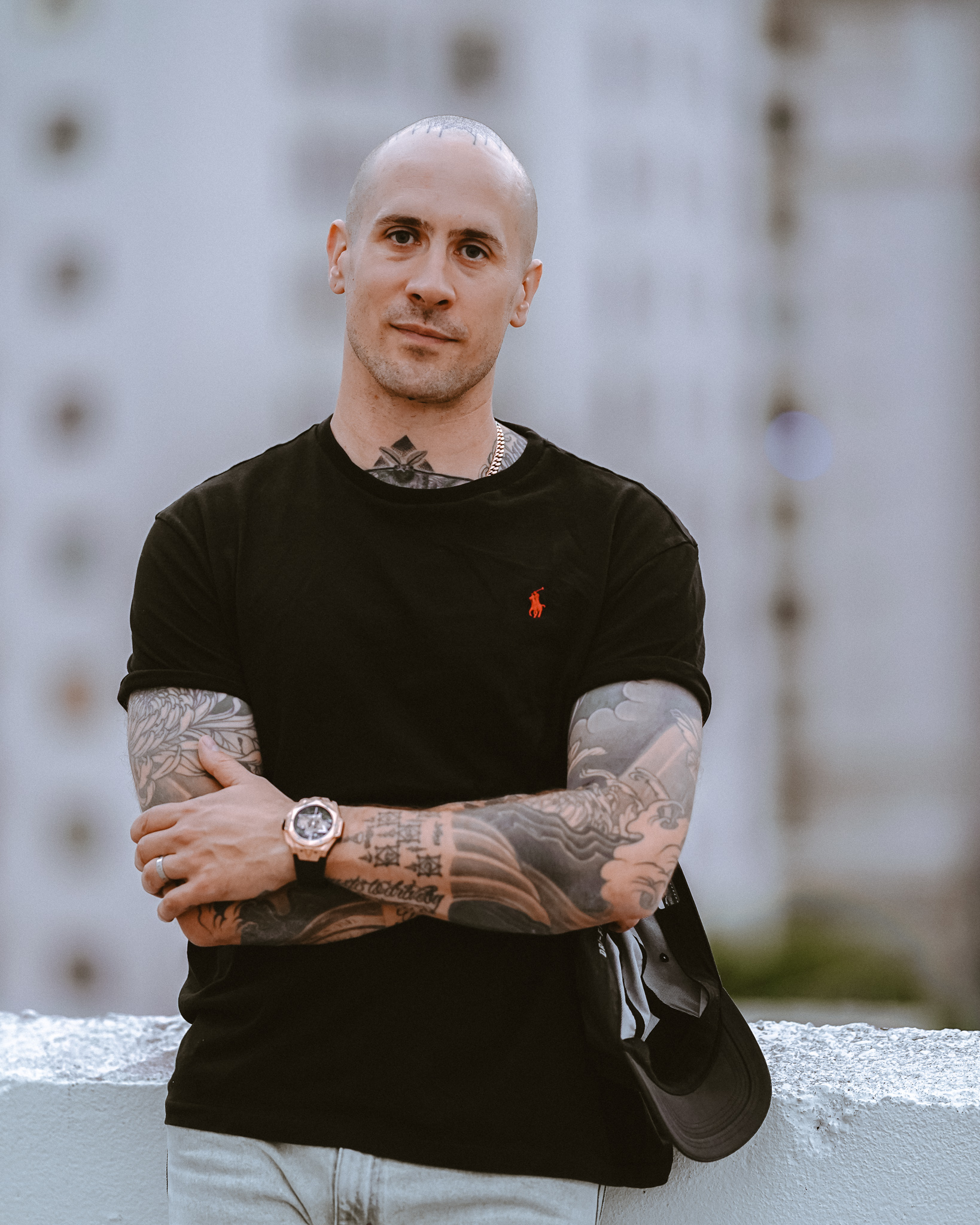