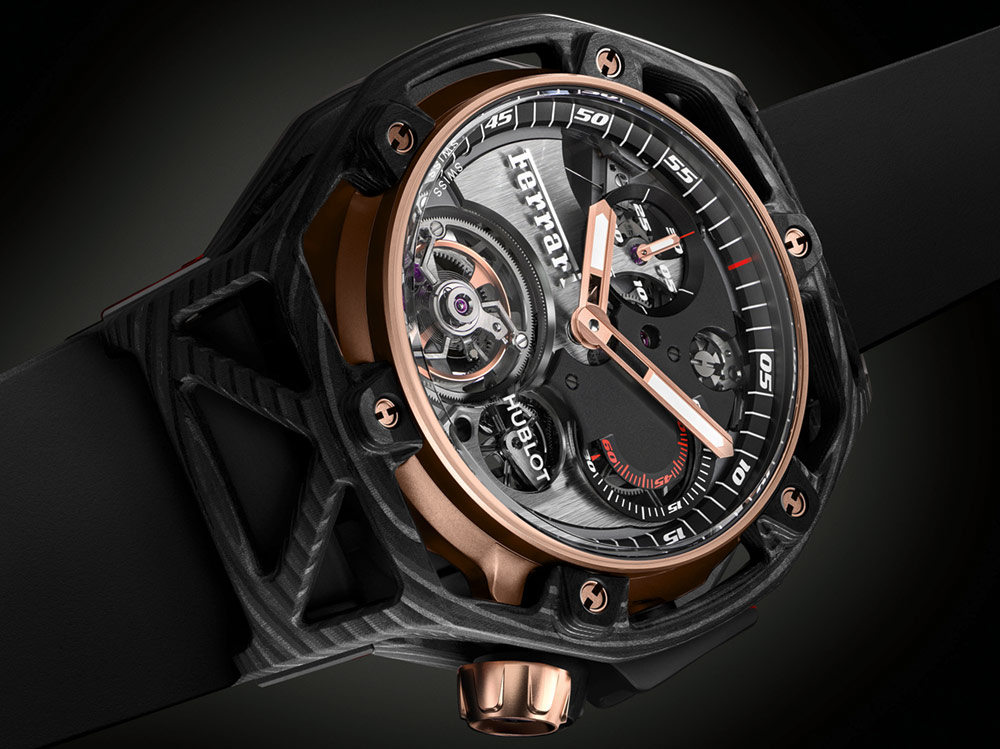 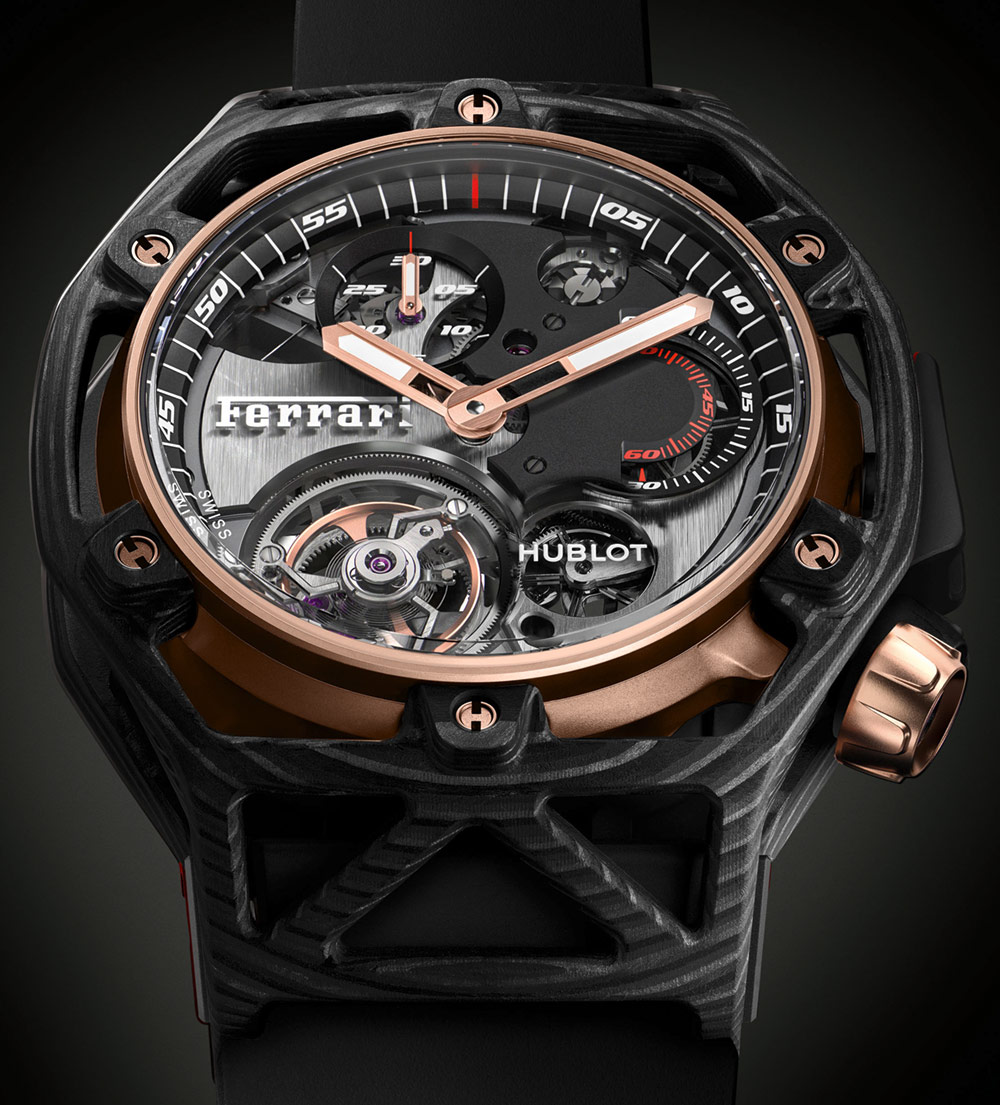 2017 marks the 70th anniversary of a certain automaker that tends to generate passion among car enthusiasts like no other. Synonymous with the color red, this automaker also happens to have the most successful team in Formula One. Have you guessed it yet? The automaker is none other than Ferrari. As the official watchmaking partner of Ferrari, Hublot introduced the Hublot Techframe Ferrari 70 Years Tourbillon Chronograph watch to mark the occasion earlier this year, but this is a new one-off version made from PEEK Carbon and King Gold. 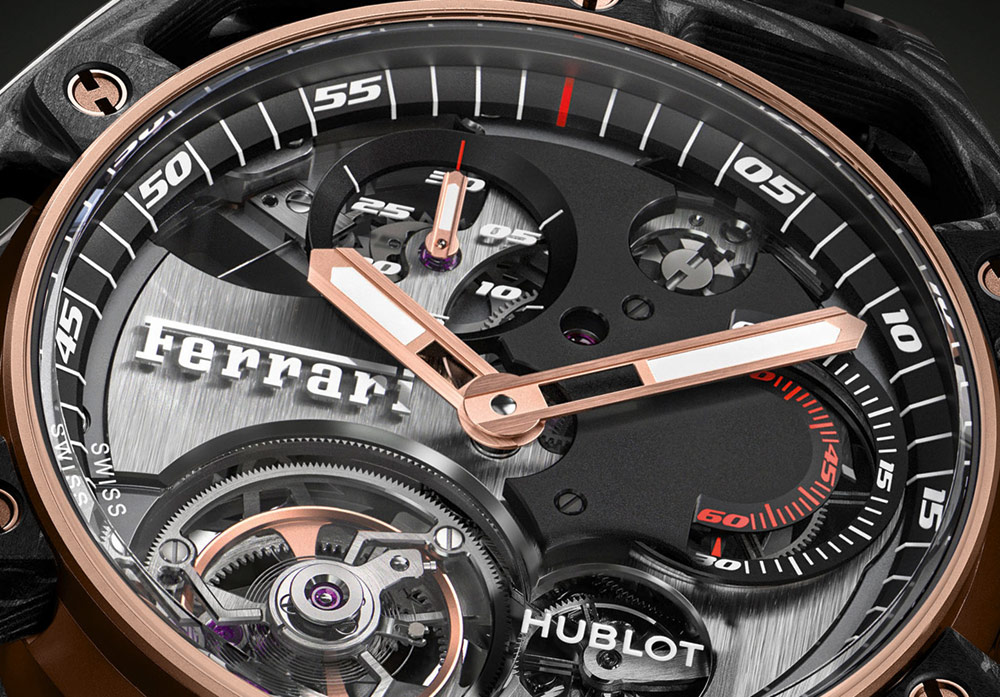 The partnership of Hublot and Ferrari is now into its fifth year and has produced many of Hublot’s most avant-garde and impressive pieces such as the Hublot MP-09 Tourbillon Bi-Axis (hands-on) watch and the Hublot MP-05 LaFerrari watch (hands-on with the sapphire case version), as well as more familiar Hublot fare like Big Bang Ferrari (such as the model we reviewed here) editions. 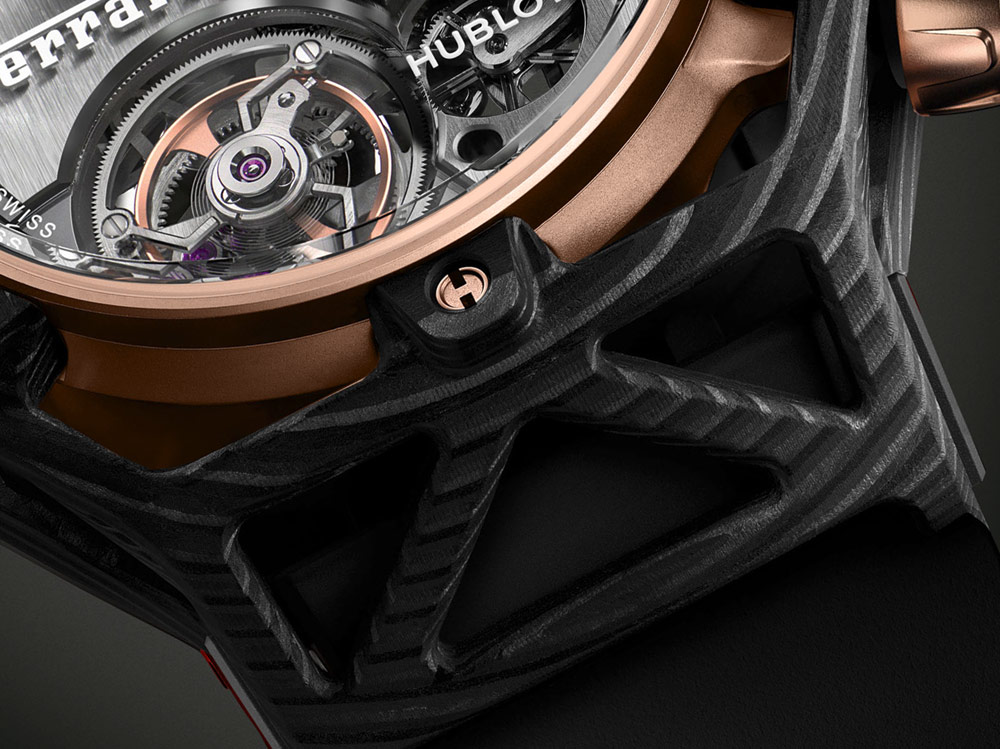 The Hublot Techframe Ferrari 70 Years Tourbillon Chronograph watch was unveiled earlier this year (hands-on here), and the specific version in the materials you see here was made as a one-off piece for auction. It’s a technically impressive watch, of course, with a chronograph function and tourbillon escapement. Designed in collaboration with Ferrari, the resulting watch, with its very architectural and bridge-like case design, looks unlike any other Hublot watch before it. 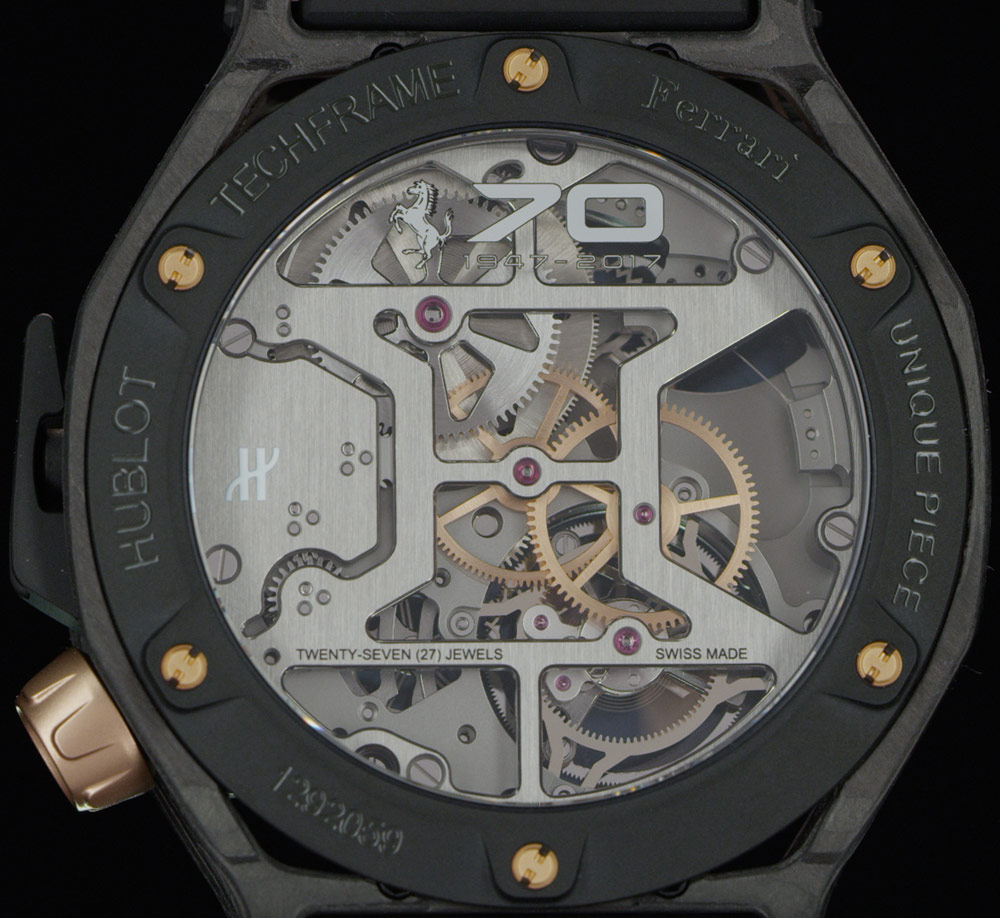 So what’s unique about this watch? Well, the Hublot Techframe Ferrari 70 Years Tourbillon Chronograph watch was initially produced in three variants – King Gold, titanium, and PEEK carbon – that were limited to 70 pieces each. This version, however, uses a combination of PEEK carbon and King Gold together. The skeleton frame that protects the case is made out of ultra light and strong PEEK carbon, while the case itself is made from King Gold. King Gold is the name of a gold and ceramic alloy developed by Hublot that has a richer red hue compared to typical 5N red gold and is also much harder and more scratch-resistant. 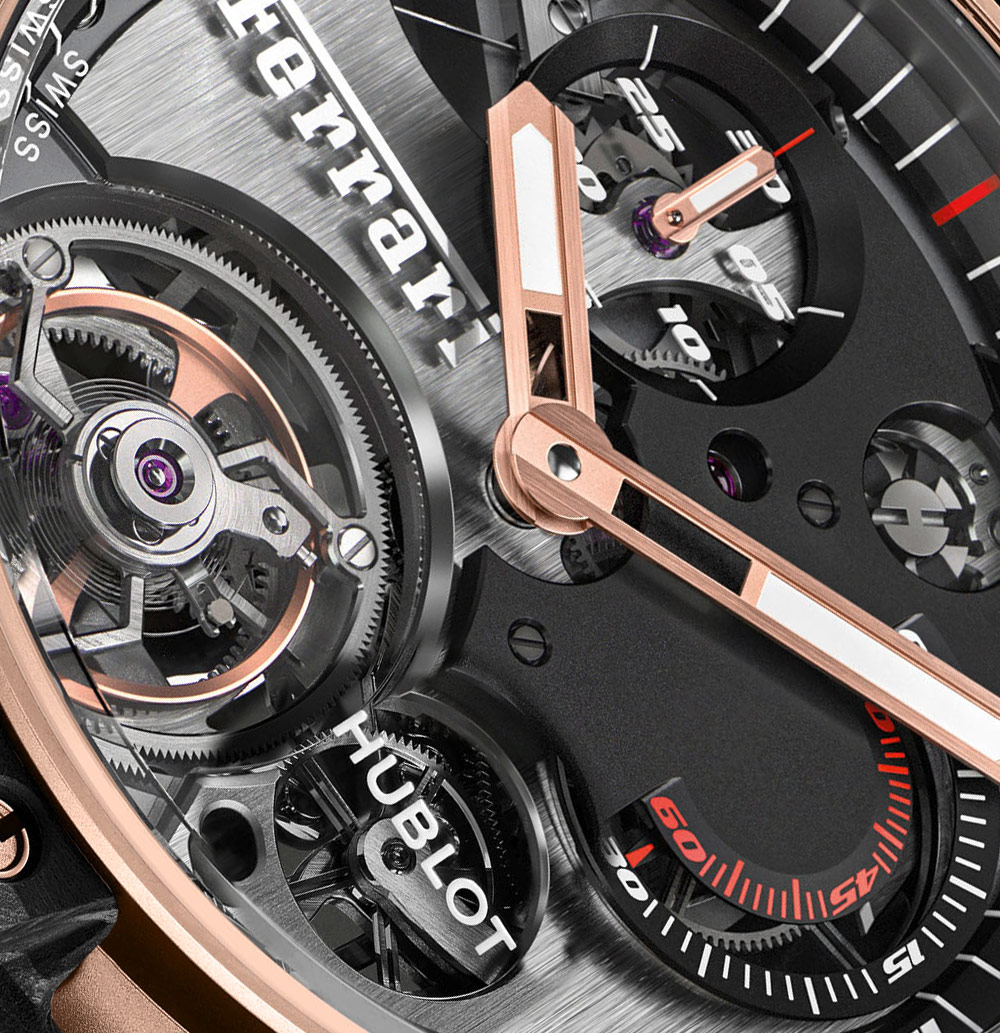 The dial features matching gold elements as well. The hands, for example, are coated with 5N red gold, satin-finished, and filled with white Super-LumiNova. The distinctive H-screws are made out of 5N red gold too.

The configuration of the skeletonized dial remains unchanged. The 30-minute counter sits at 11 o’clock and there’s a seconds counter at 3 o’clock. The column wheel mechanism is exposed at 1 o’clock and at 7 o’clock is the sizable tourbillon. The dial features the logos of both Ferrari and Hublot, and the fonts for various registers and the minute track are lifted straight from the dashboard of Ferrari’s supercars. 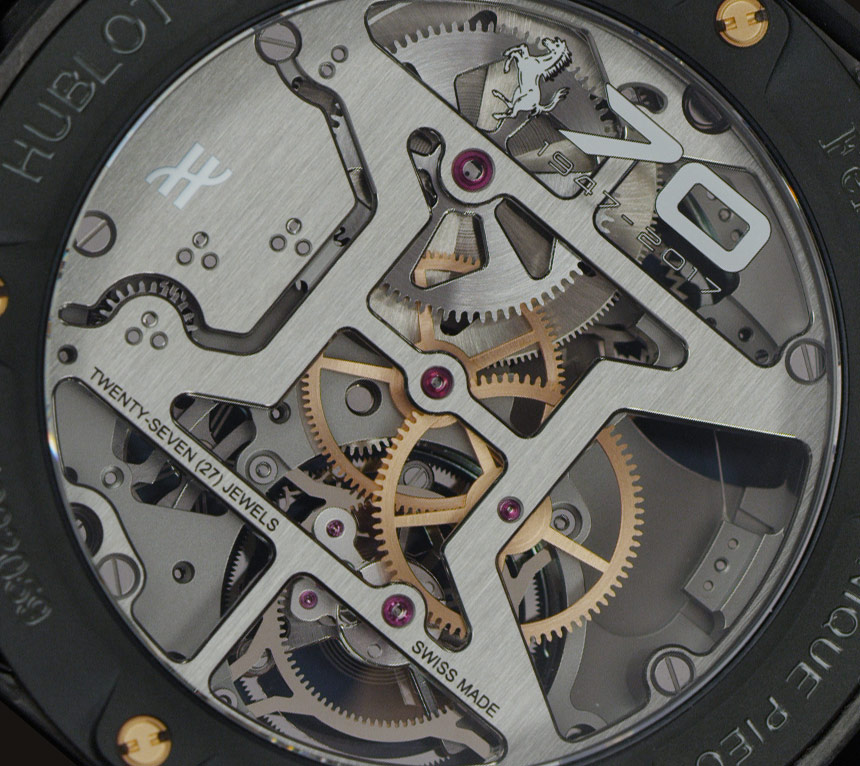 The movement of the Hublot Techframe Ferrari 70 Years Tourbillon Chronograph watch is the Hublot HUB6311. In-house made, it features 253 components, beats at 3Hz, and has a power reserve of 115 hours. One neat thing about the movement is that it uses a sapphire crystal to secure the top part of the tourbillon, creating the illusion that the tourbillon is spinning without any top support.

The Hublot Techframe Ferrari 70 Years Tourbillon Chronograph watch, including this PEEK Carbon and King Gold model, is one I think will have a lot of meaning for the die-hard Tifosi. Obviously, this version doesn’t differ that greatly from the earlier Techframe Ferrari 70 Years Tourbillon Chronograph watches that were announced earlier this year, but being a unique piece does make it more “special.” Plus, it will give its lucky owner some bragging rights, especially during Ferrari meet-ups. The watch was recently auctioned by RM Sotheby’s and it went under the hammer for €180,000, which is considerably more than the most expensive King Gold version of the Hublot Techframe Ferrari 70 Years Tourbillon Chronograph watch. hublot.com