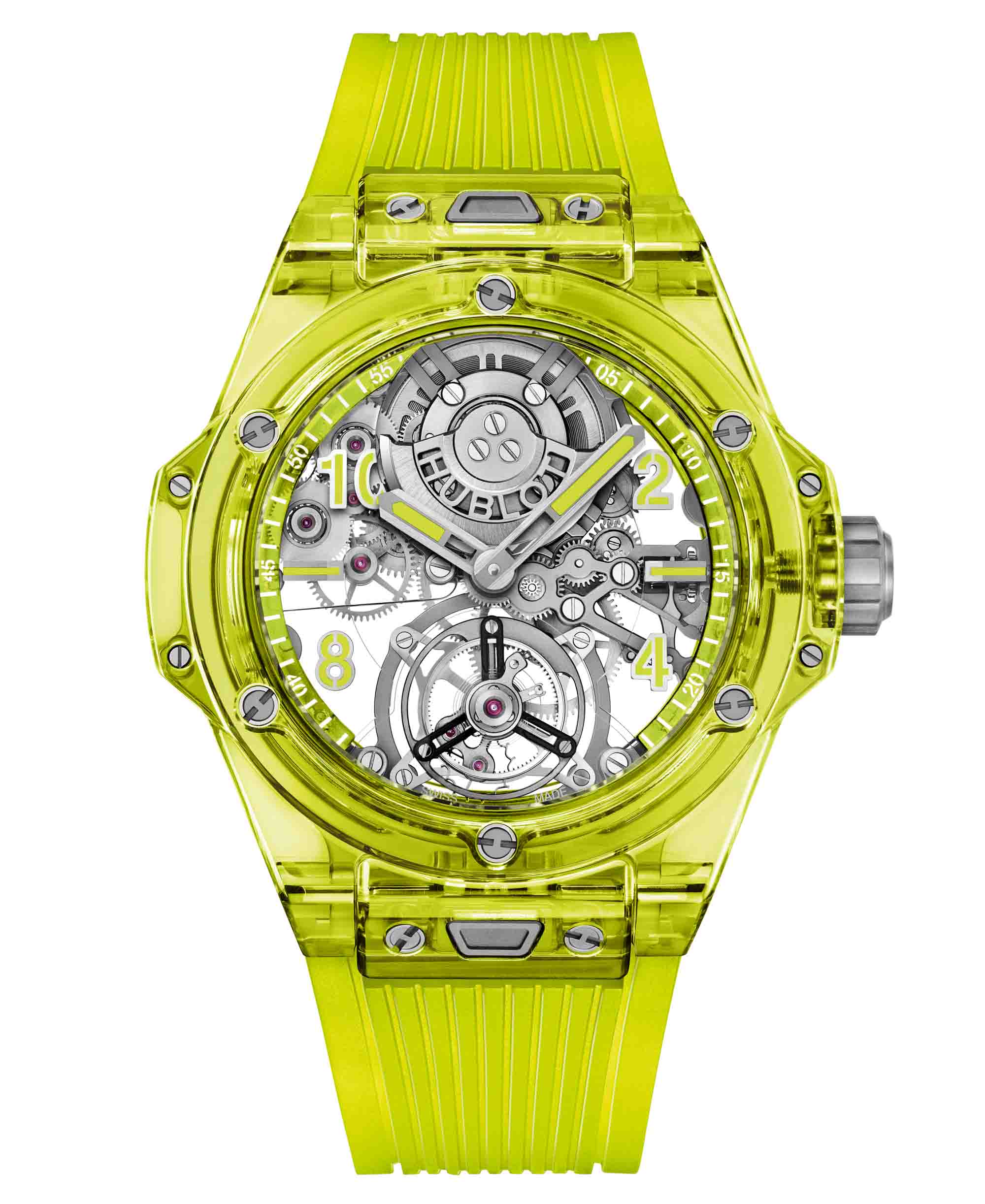 I’m an unapologetic fan of Hublot, and among all of the brand’s watches, it is the various colored sapphire creations that are typically my absolute favorites. With six-figure price tags, they are firmly in the aspirational category for someone like myself, although there is something about a fully transparent case in a bright and fun color that speaks to my inner child and simply makes me happy. That said, sapphire is just one material that can be used to make a transparent watch case. When Hublot wants to achieve a rich and vivid hue that simply isn’t possible with colored sapphire, the brand turns to a material known as SAXEM, which offers many of the same structural properties as sapphire, but permits brighter and more saturated colors. When it comes to Hublot’s colored sapphire watches, it is the yellow ones that are my all-time favorites. However, as part of the brand’s releases for LVMH Watch Week 2023, Hublot has unveiled the Big Bang Tourbillon Automatic Neon Yellow SAXEM, which offers everything that I love about the brand’s yellow sapphire models, while turning the color up a notch with a fluorescent yellow case that is crafted from transparent neon-colored SAXEM. 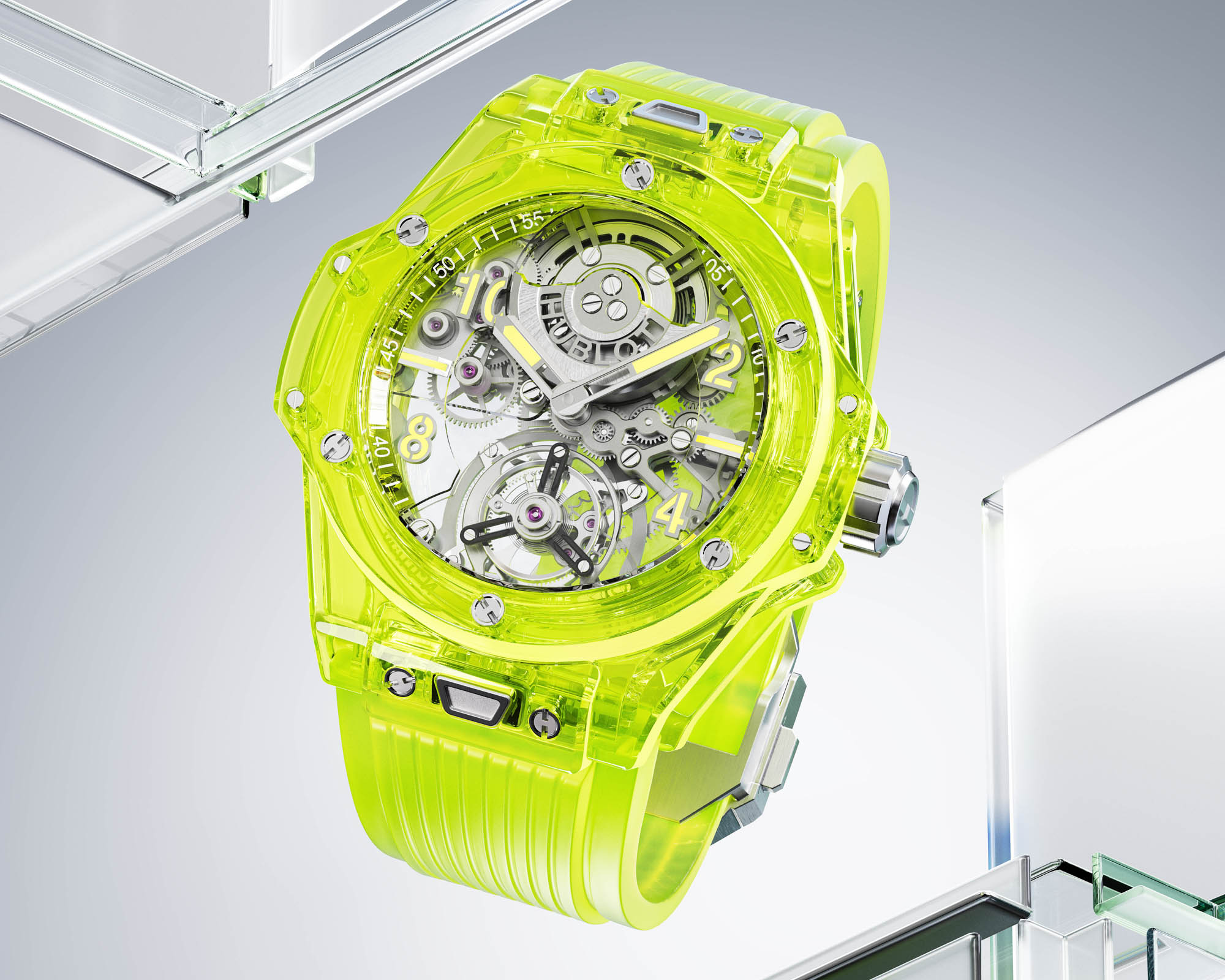 Hublot first used SAXEM in 2019 for the Big Bang MP-11, which featured the material in a vivid color of emerald green. After three years of further experimentation and refinement, Hublot has created a version of the material that is in a bright neon yellow color that almost has the same unnatural fluorescent hue as the popular soda Mountain Dew. SAXEM stands for “Sapphire Aluminum oXide and rare Earth Mineral” and at its core, it is an alloy of aluminum oxide (the basic component of sapphire) and rare earth elements such as thulium, holmium, and chromium, which was originally developed for the satellite industry. Similar to sapphire, SAXEM is completely transparent and highly resistant to wear and damage, although it is capable of being produced in richer, more brilliant colors. Additionally, due to the absence of tension within the material, SAXEM offers greater stability when it comes to shaping, and the cubic crystalline structure of the material itself allows it to appear with the same shade and intensity of color, regardless of the angle that it is being viewed. 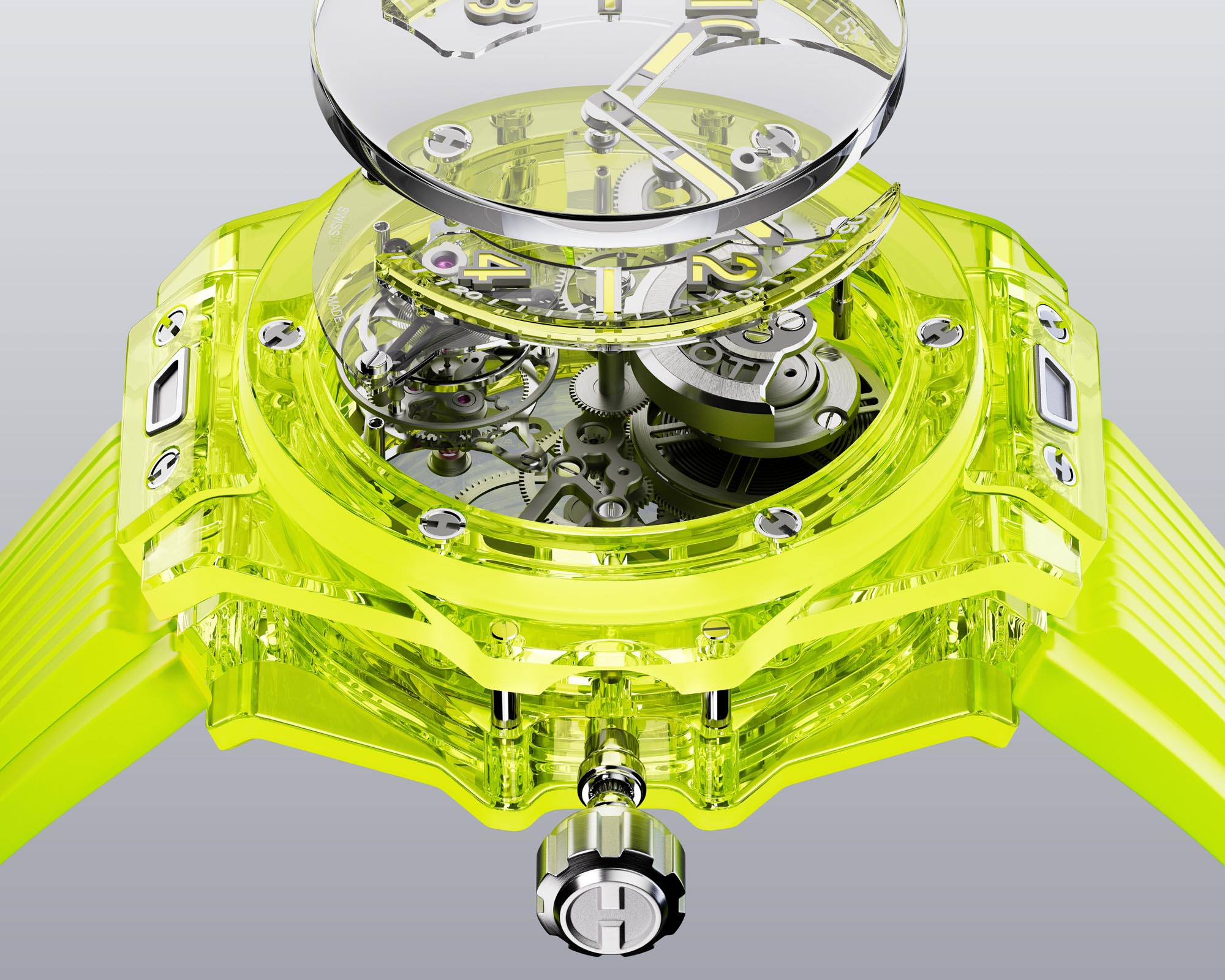 When it comes to the design of the new Hublot Big Bang Tourbillon Automatic Neon Yellow SAXEM (ref. 429.JY.0120.RT), the watch itself is essentially the same exact model as the other Big Bang Tourbillon Automatic models that previously were released with orange sapphire and purple sapphire cases, but with a case made from neon yellow colored SAXEM and fitted with a matching neon yellow rubber strap. Like its colored sapphire siblings, the overall case profile is immediately identifiable as being part of the brand’s Big Bang collection. It measures 44mm in diameter by 14.4mm thick, with angular multi-component case structure that features integrated lugs, along with the Big Bang’s signature bezel that includes six exposed screws in polished and micro-blasted titanium. Protecting both the dial side of the watch and set into the caseback are clear sapphire crystals that offer an unobstructed view of the skeletonized movement, while water resistance comes in at 30 meters to protect against any incidental contact. 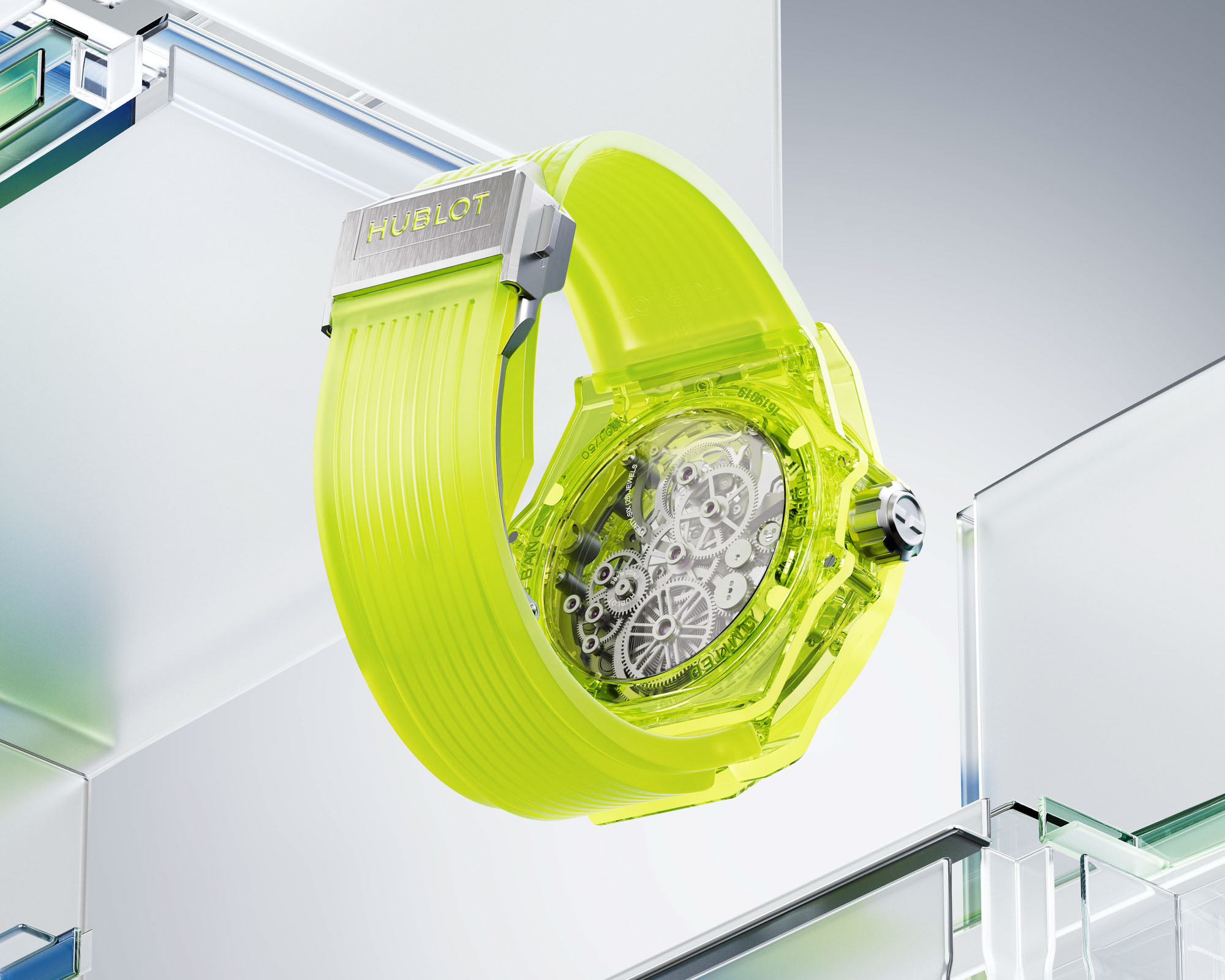 Similar to other models from the Big Bang collection, the new Hublot Big Bang Tourbillon Automatic Neon Yellow SAXEM features a prominent titanium winding crown at the 3 o’clock location, along with the brand’s quick-release strap system, which appears as a set of trapezoid-shaped buttons located on the top of the angular integrated lugs. Releasing the strap changing system is done by simply pressing the two trapezoidal buttons and pulling out the ends of strap. However, the included neon yellow textured rubber strap fitted with a signed double push-button titanium deployant buckle is pretty much a perfect match for the vivid fluorescent color of the yellow SAXEM case, so I can’t imagine that there will be all that may collectors out there who will be interested in wearing the watch on other strap options. 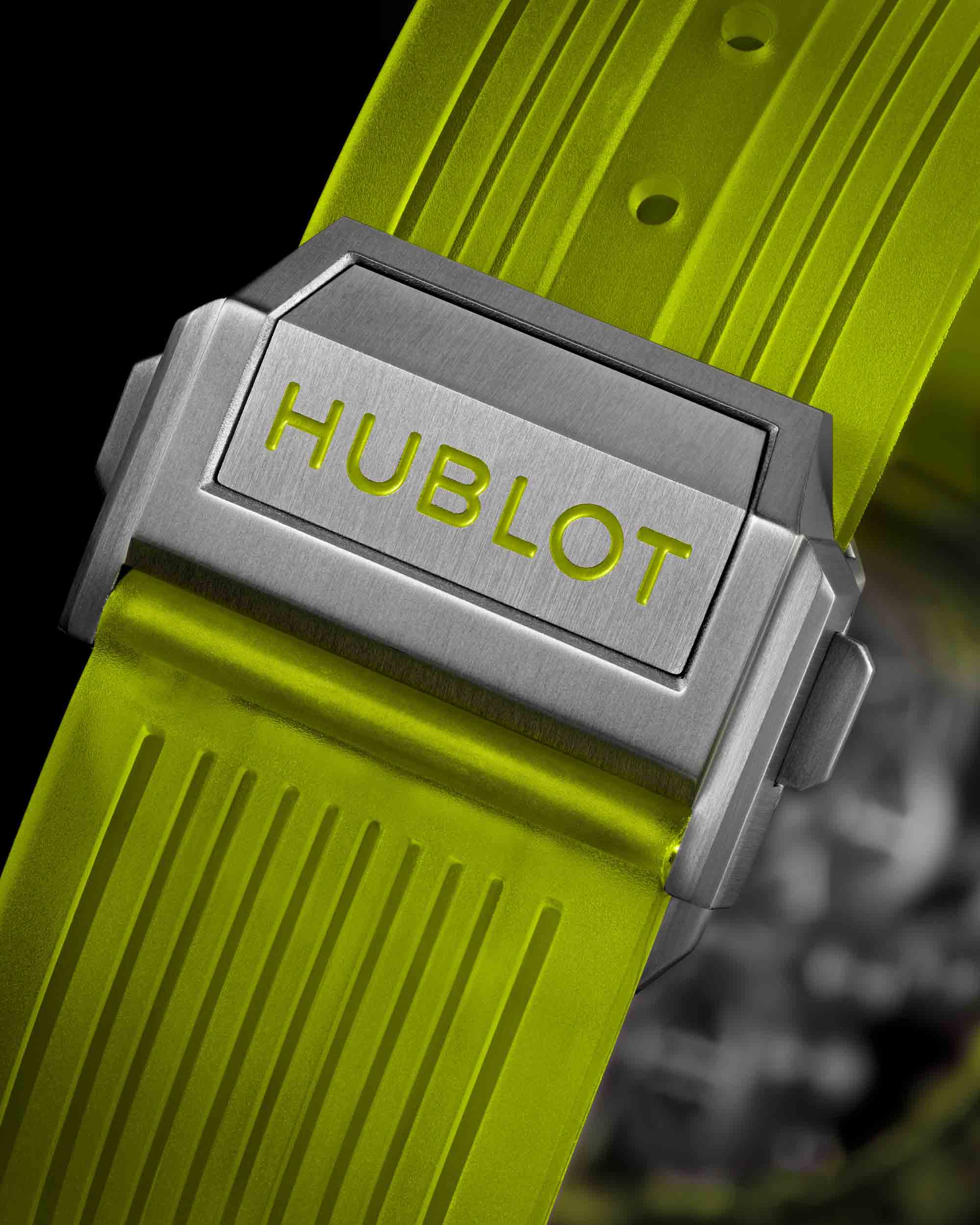 Just like its orange and purple sapphire predecessors, the dial of the Hublot Big Bang Tourbillon Automatic Neon Yellow SAXEM is crafted from clear sapphire in order to create an open appearance and reveal as much of the HUB6035 automatic movement as possible. At the center of the dial are a pair of skeletonized hands for displaying the hours and minutes, while the movement itself has been open-worked to remove as much of its material as possible and it even features sapphire bridges for an entirely unobstructed view of its gear train and escapement. A large tourbillon appears to float at the 6 o’clock location, while sitting opposite it at 12 o’clock is a skeletonized micro-rotor in the shape of Hublot’s name that allows the watch to automatically wind itself without obscuring the view of its movement through the caseback like with a traditional centrally-mounted rotor. Running at a frequency of 21,600vph (3 Hz) and offering users a power reserve of approximately 72 hours, this is the exact same movement that can be found inside the purple and orange sapphire versions of this watch, although the hands and hour markers fitted to this new version are finished in fluorescent yellow to match its case. 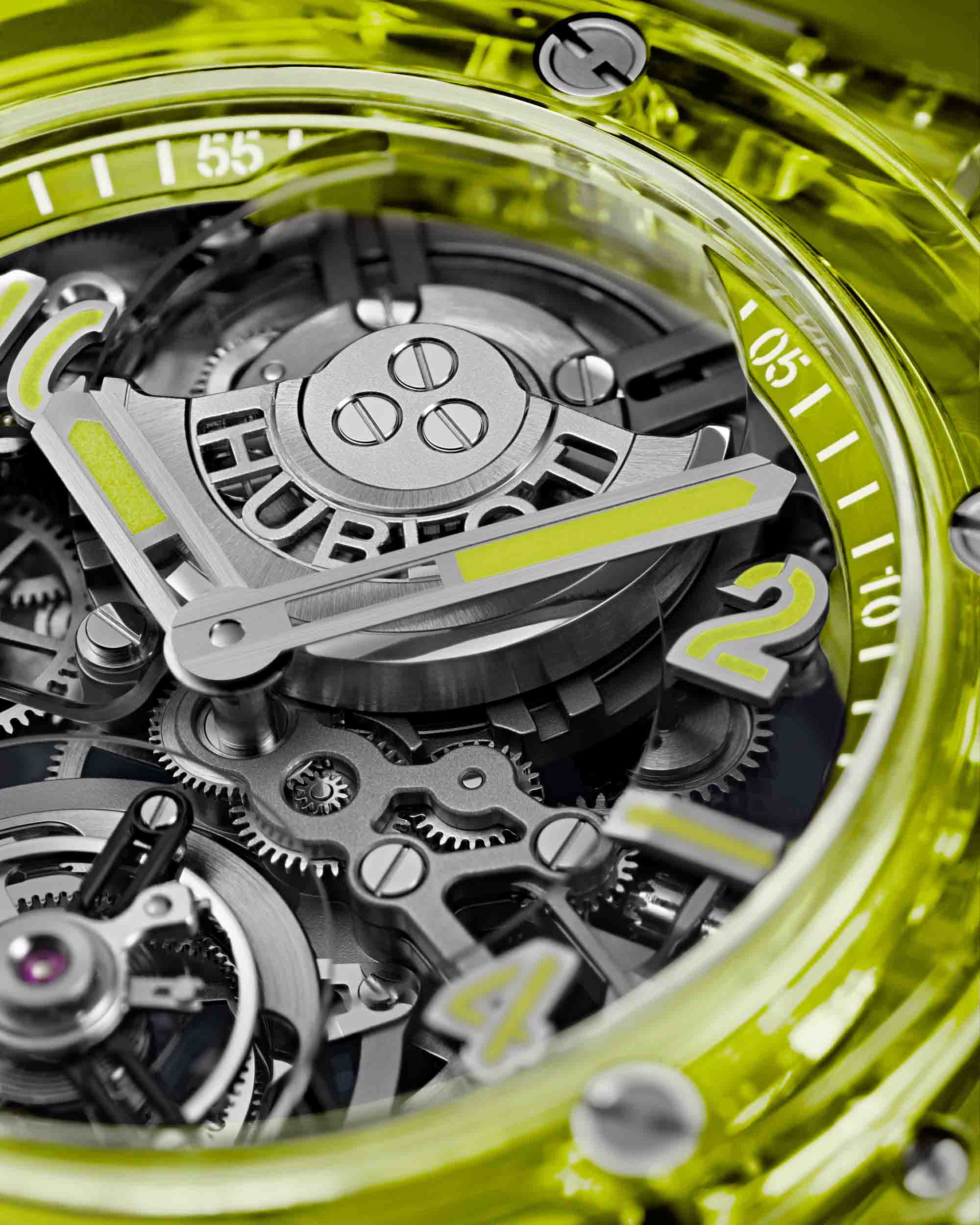 All of Hublot’s colored sapphire watches are accompanied by prices in the six-figure territory, and this certainly applies to models that swap out sapphire for SAXEM. Consequently, the new Hublot Big Bang Tourbillon Automatic Neon Yellow SAXEM is accompanied by an official retail price of $211,000 USD, which makes it about eleven grand more than its purple sapphire sibling. Additionally, just like the two colored sapphire versions of this watch, the new Neon Yellow SAXEM edition will be produced as a limited edition of just 50 pieces, and this price point puts it right near the top end of Hublot’s current catalog. As a kid, I loved anything that was this fluorescent color of neon yellow, and the novelty of this lurid hue hasn’t worn off as I’ve become an adult. That said, this is undoubtedly an expensive watch, and this same amount of money could also buy you a supercar or even be a down payment on a house. However, this ultra-exclusive timepiece isn’t for the person who has to decide whether they want one of these items or another, because they probably already own at least one supercar, and they would likely be buying a house that requires far more than a down payment of a couple hundred grand. I always say that Hublot is best at making fun, colorful, and in-your face statement pieces, and if you gave me a blank check and said that I could have any watch from Hublot’s current lineup, there would be no doubt in mind that I would be going home with one of the 50 examples of the Big Bang Tourbillon Automatic Neon Yellow SAXEM. For more information on the watch, please visit the brand’s website.