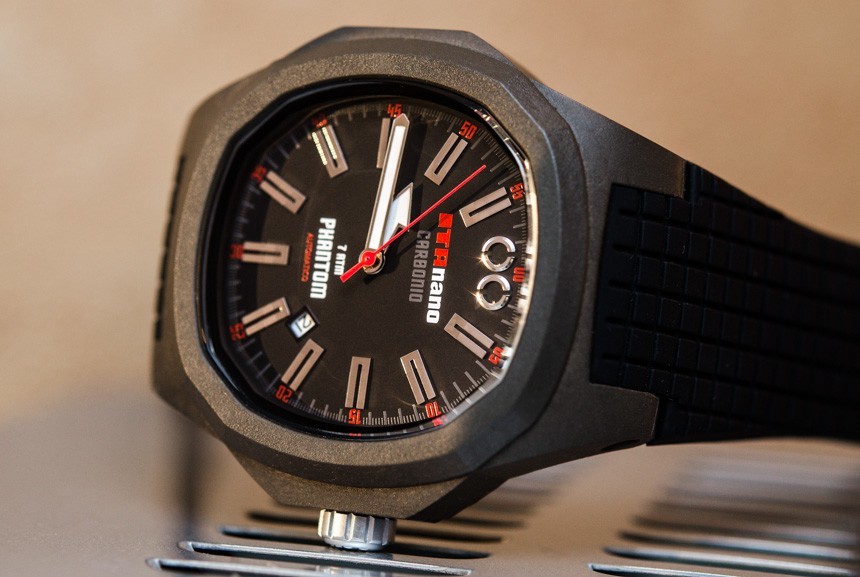 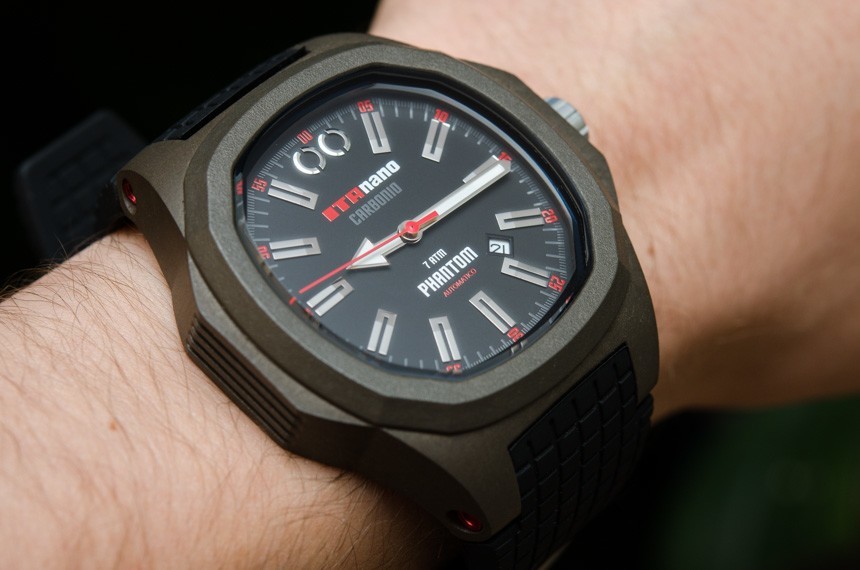 In early September, I will be headed to Hong Kong for the 2014 Hong Kong Watch & Clock Fair and the primary reason I am excited about it is that I expect to see a lot of bold new – not necessarily great, but undeniably new – designs and concepts. And while European and US-based shows do offer an in-depth look into what the big guns and important independents are about, it is important to look elsewhere too to find new and different sources of innovation. Despite a number of respectable exceptions, most major brands act slow when it comes to coming up with new concepts or value propositions – allowing the “new guys” in the business to steal some of the attention from the big guns. Today, we are here to discuss one of these positively surprising new brands (that will also be present at the Hong Kong Watch & Clock Fair) and one of their key models: the ITAnano Phantom Carbon Automatic 49 watch.

ITAnano is an Italy-based company that was founded by Alessandro Baldieri, an Italian entrepreneur who also has a number of other watch brands to his name. The concept behind ITAnano is developing new manufacturing technologies which are then exported overseas – so as to keep the costs and hence the price of the finished product as low as possible. With the ITAnano Phantom Carbon Automatic 49 we are looking at a watch that pairs a sub-$600 price tag with a futuristic case material that we recall to have been exclusive to luxury brands only: carbon.

Now, we must note that carbon cased watches are by no means a new thing: Audemars Piguet debuted their first forged carbon cased watch in 2007 and since then we have seen carbon – this low-weight, durable and extremely hard material – premier in the collections of several watch brands. So what is exactly new here, and what is this craze for carbon all about? 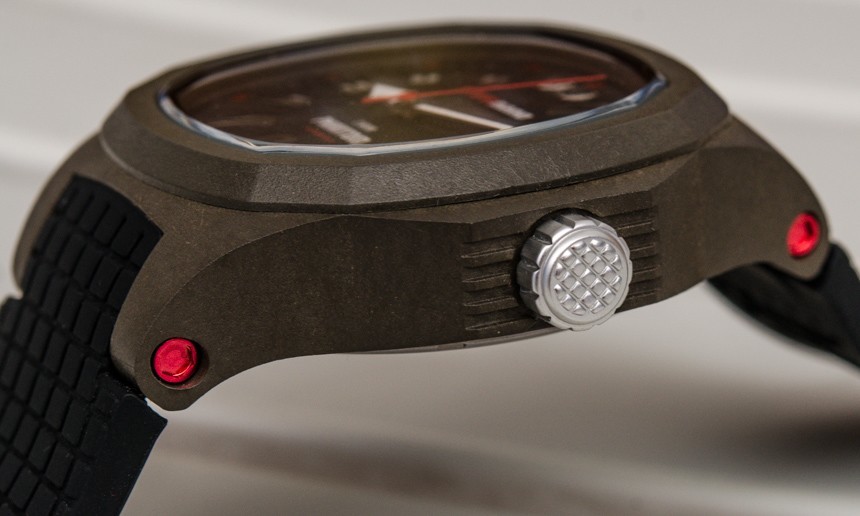 Most car and aeronautic enthusiasts will surely be familiar with this 21st century material, but for those that are not, let us explain what carbon has to offer. Among its primary advantages over other materials – and we will refer to stainless steel now as that is the most ubiquitous case material –  is that it is extremely light and also offers comparable (and in some ways superior) durability. Carbon undoubtedly is a modern material that works best with modern design – but more on that a bit later. Before we look at the watch itself in detail, allow us to first discuss carbon as a material and why it is so important – after all, it is the Phantom’s carbon case that truly sets it apart from the rest in its price segment.

So far, we knew carbon as a material that was more or less exclusive to high-end brands – and their top of the line models at that – and we had no trouble accepting that. Just consider where else you find carbon used most frequently, and you will certainly see what we mean: we have been seeing airplane and finer car manufacturers incorporate this material in their products, and even when it was used by other industries, carbon fiber universally remained exclusive to premium products. With that in mind it is no wonder that we are hugely impressed by seeing it turn up out of the blue in a watch that is way into the sub-$1000 price segment. 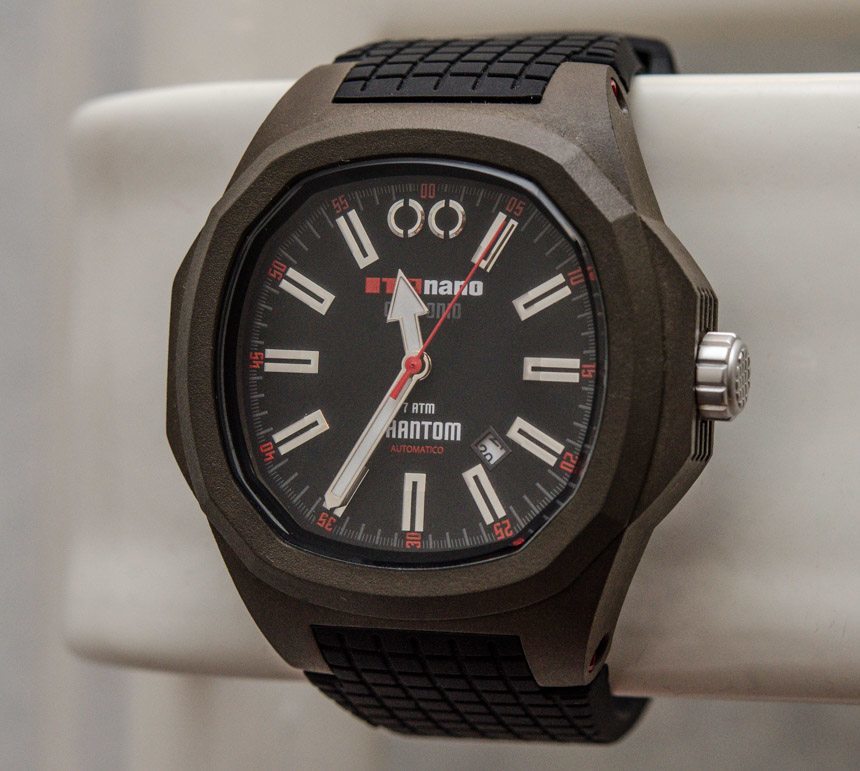 Here, we could note that the absolute majority of other carbon cased watches are manufactured not in Asia but rather in Switzerland – and while that certainly matters a lot when it comes to production costs, it arguably does not make up for the 30-60 times price difference between the ITAnano Phantom Carbon Automatic 49 and its Swiss counterparts.

So, what about the material itself, is it any different to what is used in other timepieces? Well, the answer to that is yes and no. There are several different ways of manufacturing carbon products, and while we are not experts in this field, we will summarize some of the key alternatives. For one, there is the method that results in what we could perhaps call the “traditional carbon fiber” that most will likely be familiar with: the result is a material that has a chessboard-like texture to it. That look is achieved by placing several layers of weaved carbon sheets on top of one another, which are then pressed tightly together to achieve their structural integrity that renders them suitable for use in cars, airplanes and other items where they are exposed to great stress. Just think of the Hublot Unico All Carbon (hands-on here) as a fitting example.

Second, there is forged carbon, in which case thin strips of carbon fiber are cut into a 1-2 inch-long pieces which are then placed into a mold. The mold is very nearly the exact shape of the desired component and so, as the carbon fiber snippets are subjected to immense pressure and temperatures that exceed 1000 degree Celsius, the material picks up the exact shape of the mold. Here we could name this Audemars Piguet Royal Oak Offshore Diver (hands-on here) as an example: you will see that the texture of the forged carbon case is always unique and by far not as generic as that of regular carbon fiber. 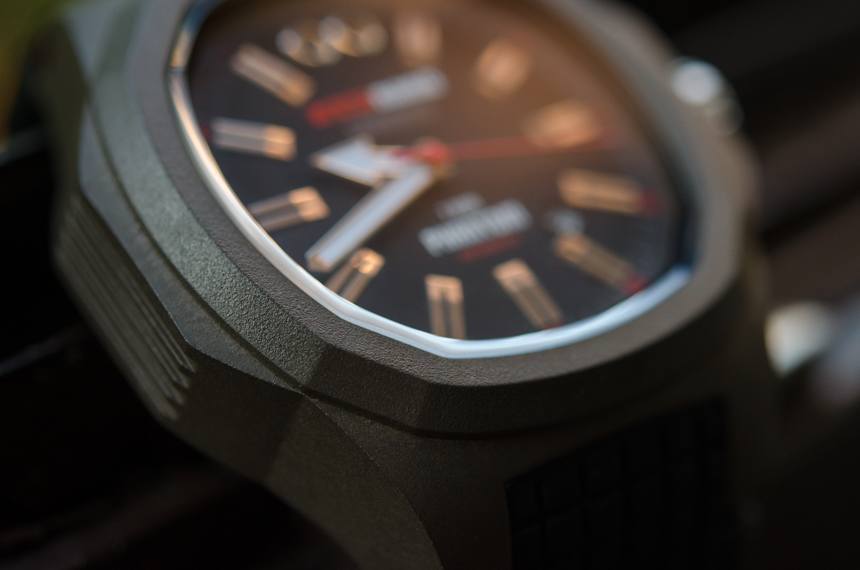 Finally, there is a method that we could basically refer to as “mold injection technology”, in which case, carbon is added to a liquid plastic resin which then is injected into a mold and then subjected to the aforementioned high-pressure and high-temperature treatment.  ITAnano says they make their cases of CFRP, i.e. carbon fiber reinforced polymer and, in their case, that refers to this mold injection technology. When it comes to aesthetics, the results are again different to the other two methods: the case of the ITAnano Phantom Carbon Automatic 49 has a matte, microscopically grained look and a very soft and pleasant touch to it.

The result of all this witchcraft? A case that with a grained texture and a deep, camouflage-green look (that tends to blend into dark brown depending on the lighting) and an exceptionally low weight to it. ITAnano claims that the case itself weighs a mere 13 grams – although that may refer to the 43 millimeter version of the same model, with the 49 mm one likely coming in at a bit above that. What’s more important, though, is that the chunky, nearly 50 millimeter wide watch weighs in at just 94 grams – I measured it with the rubber strap installed. A consequence of this featherweight construction is exceptional wearing comfort that completely contradicts – and makes one almost immediately forget – the more-than-hefty case case. 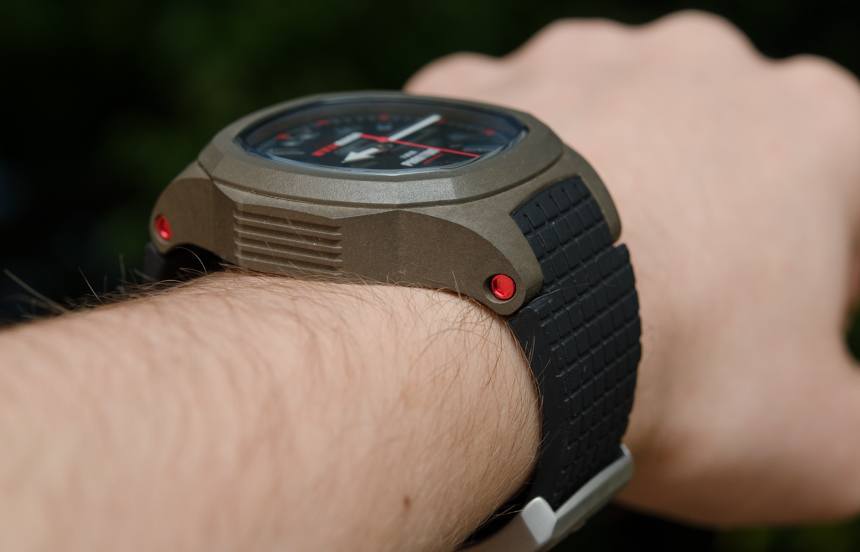 It is not just the mere lack of weight that renders the wearing experience so pleasant, but rather the way weight is distributed – let me explain. Under normal circumstances, say in the case of a steel cased watch and a leather strap, the case of course is the heaviest part, which in turn tends to end up wobbling and moving about during more sudden movements of the hand. However, when the case is as light as it is of the ITAnano Phantom Carbon, the weight is distributed much more evenly, minimizing the extend of wobbling and unpleasant movement of the watch on the wrist. 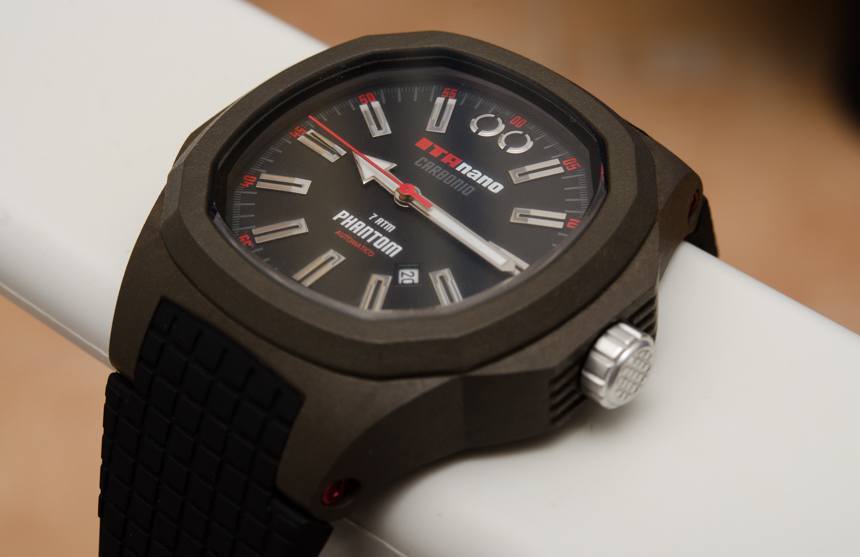