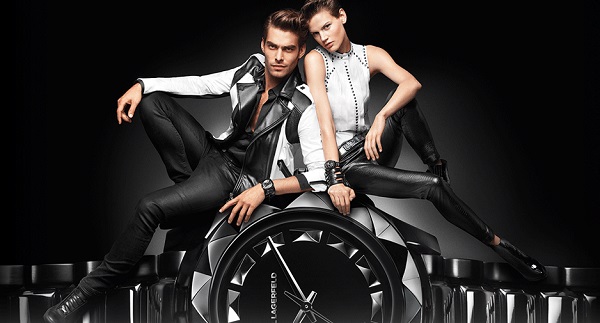 Fossil may just be trying to recreate the magic it experienced with its Michael Kors relationship in producing their watches. Back in November I helped debut Karl Lagerfeld’s new quirky collection of fashion-forward timepieces here on Departures. Back then we were given a mere glimpse of the new collection, but the message was clear… the typically high-end Lagerfeld brand was going mass-market with its timepiece collection. A tactic employed by many fashion brands when entering the timepiece field, but the opinion on whether to go high or low remains divided.

Emporio Armani went low-end, also using Fossil as a manufacturer for its watches. Ralph Lauren went decidedly high-end. And from Burberry to Ermenegildo Zegna, to many more, you’ll find everything in between. It brings up the interesting question of how a high-end clothing maker could or should enter the world of watches. To people like me, buying a watch from a fashion label should be an “honest” experience. The timepiece should be as good or better than the clothing. That is if we are interested in having a brand that makes pants also make our watch. On the other hand, what does the mainstream want? 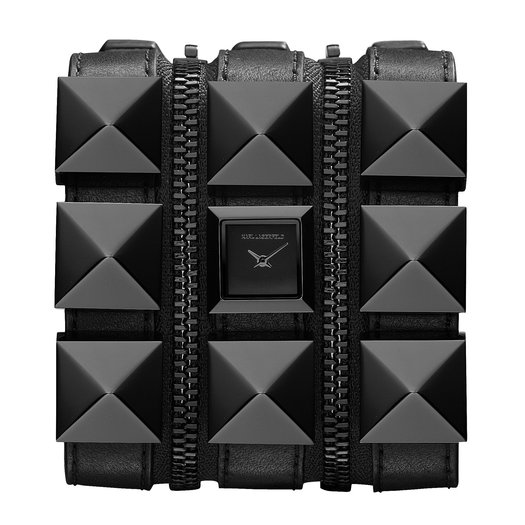 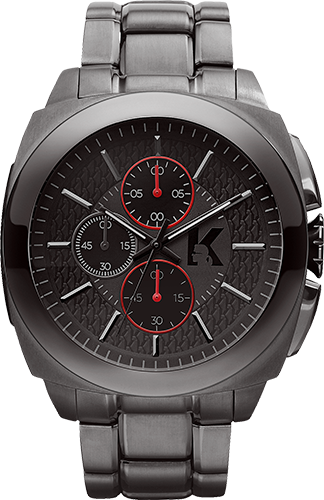 First, consider that to most people (and fashion labels) a watch is an accessory. Just like sunglasses, wallets, belts, etc… Brands like Chanel, Dolce & Gabbana and Prada all have accessories with their name on them that are proportionally much less expensive than their clothing. I think the idea is to offer customers a watch as being part of the brand without investing in the brand’s more expensive clothing and show items. While not every woman can afford a Chanel dress, Chanel sunglasses are much more accessible. The same goes for make-up etc… Chanel however is among the brands with a rather pricey collection of watches. But as I’ve discussed above, that isn’t the case universally. Luxury lifestyle brands seem to make calculated decisions on what products with their names on them are accessible, and which aren’t…. and it is a formula I have to admit that I don’t quite understand.

So when it comes to the “accessory” that is a watch, you could go either middle range or quite high-end. Some even go quite cheap. Karl Lagerfeld timepieces are on the less expensive side, with a current top price of about $600. On the HourTime Show podcast we haven’t always been super kind to Mr. Lagerfeld. The term “fashion zombie” has been thrown around a lot. To be honest, the guy does deserve some respect. He did have his famous bout with weight loss (even more scandalous in the thin-skinned world of runway models), and he has make it acceptable to look like a white-haired punk-style Dracula. Plus, this guy most certainly wears his sunglasses at night. 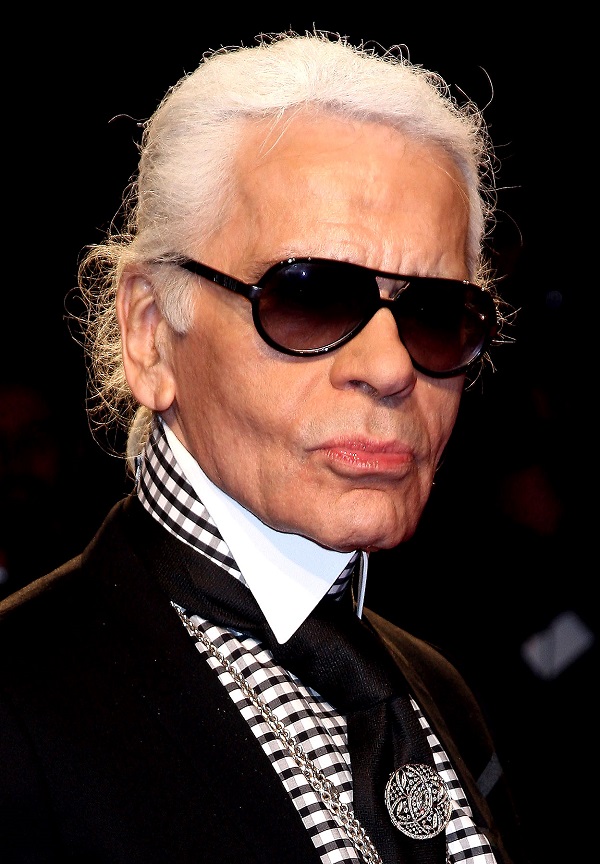 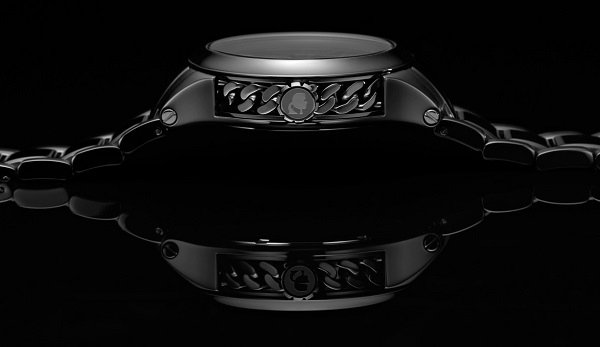 Are you ready for Karl Time? I know he is. The man’s website is so darn excited about the just-not-released watches that they have games, giveaways, and interactive tools on the site. No joke. I’ve literally never seen a fashion brand’s website be so passionate about their timepiece collection – and boy there sure are enough of them. Apparently Karl’s favorite number is seven. So there are seven collections to begin with, one of them being called “Karl 7.” Ironically enough there are 12 versions of the Karl 7. All in all, there are a lot of new Karl Watches available.

“Watch Karl” is how the watches are presented. Not sure what it is that I want to watch Karl do… but a few videos help bring you into Karl’s horological fantasy world. Understandably, the world is filled with models wearing black and white with exposed metal. Very Karl. I think it is sort of cute how Karl Lagerfeld has a logo that look likes a profile of his face, complete with ponytail and sunglasses. If you are lucky, the “Watch Karl” you are interested in will have this logo on the dial, or made into a pattern like on the Karl Pop collection. 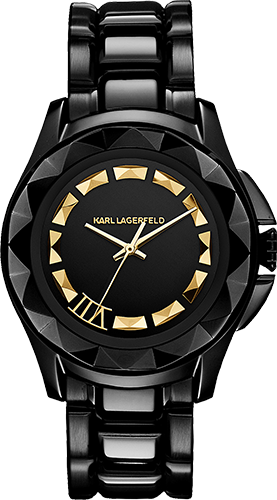 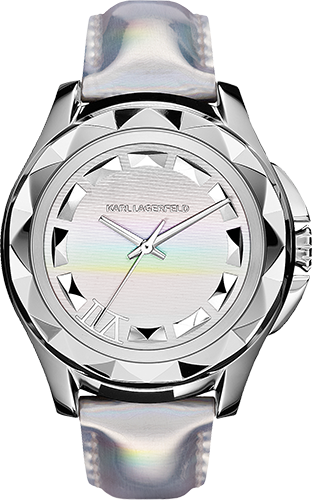 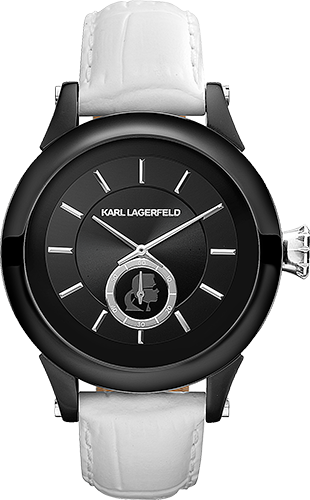 The most unique new watch is for women and is called the Karl Zip collection. The idea is interesting, being a watch whose width can be expanded by including a zipper connected section. Pyramid-shaped studs are placed on the leather straps, while the dial for the time is small, but there. A good fashion piece, but not ideal for telling the time. Though it is a creative design that should win some Karl wrists.

Designs at Karl haus look to be heavily inspired between Dior and Calvin Klein timepieces. The Karl 7 for example looks to be like a sort of baby Dior timepiece collection, though for mainstream appeal, the Karl watch certainly wins it between the two. The main timepiece collections are in the Karl 7, Karl Chain, and Karl Energy collections. Each has pieces for both men and women, with most being black or white with some hints of gold or red tones. There is a starkness to the design which appeals to Karl. He doesn’t like colors much, he is like an industrialist who feels like a good designer for Ayn Rand’s characters. 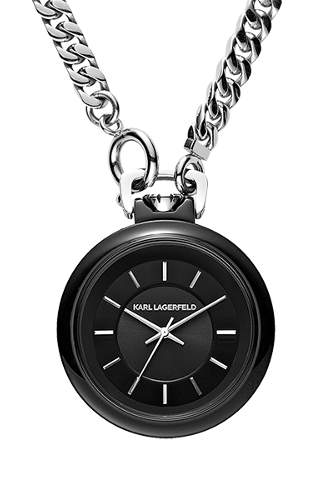 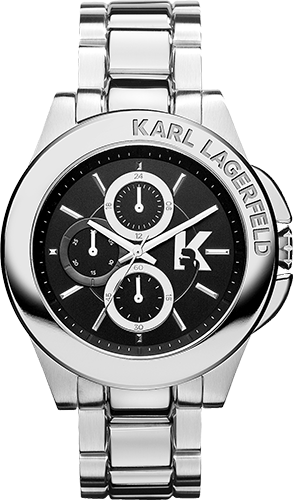 The Karl Chain collection has a design that has the case look as though a chain is going around it. Some of the Karl Chain watches even come on a chain. Wear that around your high-collared neck. Inside the watches are all Japanese quartz movements, with the collection ranging from three-hands, three-hand with subsidiary seconds dial, two hand, and chronograph models.

In the watches section of the Karl website, there is a game you can play called “Klairvoyant.” Well, not really a game, more like a Lagerfeldian Ouija board. Upon reaching this page you are prompted to ask a question to Karl, any question. So I did. Karl must have not felt that it was an appropriate query. His response to me was “If you put things away in a too tidy way, then you will only find what you are looking for.” Confucius just rolled over in his grave a few times and I was still left without any help from Karl on which Karl-elain watch I should be wearing. I kept asking more questions and kept getting the same response. Eventually the system spit out “I don’t have time for this -> Maybe more like ‘I don’t have time to waste for this.” So much for fashion advice, pfff… And Karl, you just make some young girl in France cry. I swear I can hear him diabolically laughing with his German accent in the background. 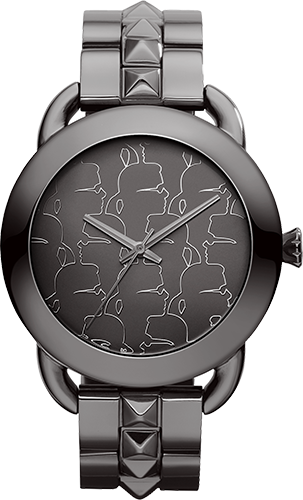 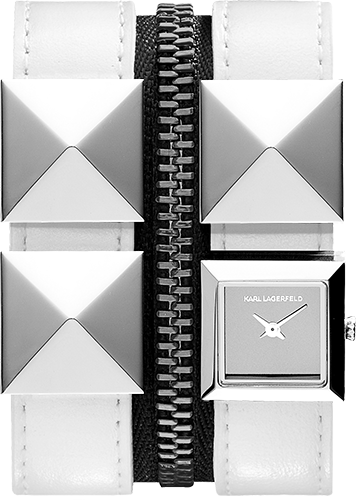 Eventually the Klairvoyant game’s logic, wisdom, and meanness just broke down as it reacted with “Personality begins where comparison ends.” That sort of makes sense in a “why am I paying this much for a shirt to get this advice kind of way.” So I left it alone to look at the watches a bit more and refused to play with the “Time Warp” game that allows you to upload a picture of yourself and apparently see what you would look like as Lagerfeld’s style heir.

Priced from about $200 – $600, Karl Lagerfeld watches will benefit from Fossil’s enormous retail presence around the world. If Karl is lucky, more people will learn about his name from seeing it on mall-priced watches than from his haute couture regular appearances in fashionlandia. Where Michael Kors watches are lighter, more traditional in their shape, and a bit conservative – Karl Lagerfeld watches attempt to be more edgy, dark, and alternative. They will probably strike enough chords. If you aren’t Lagerfeld-up yet, you can check out his artistic inspirations here and see a video of him photographing his furniture collection. Then numb your mind and read his collection of “Karlisms.” karl.com/watches