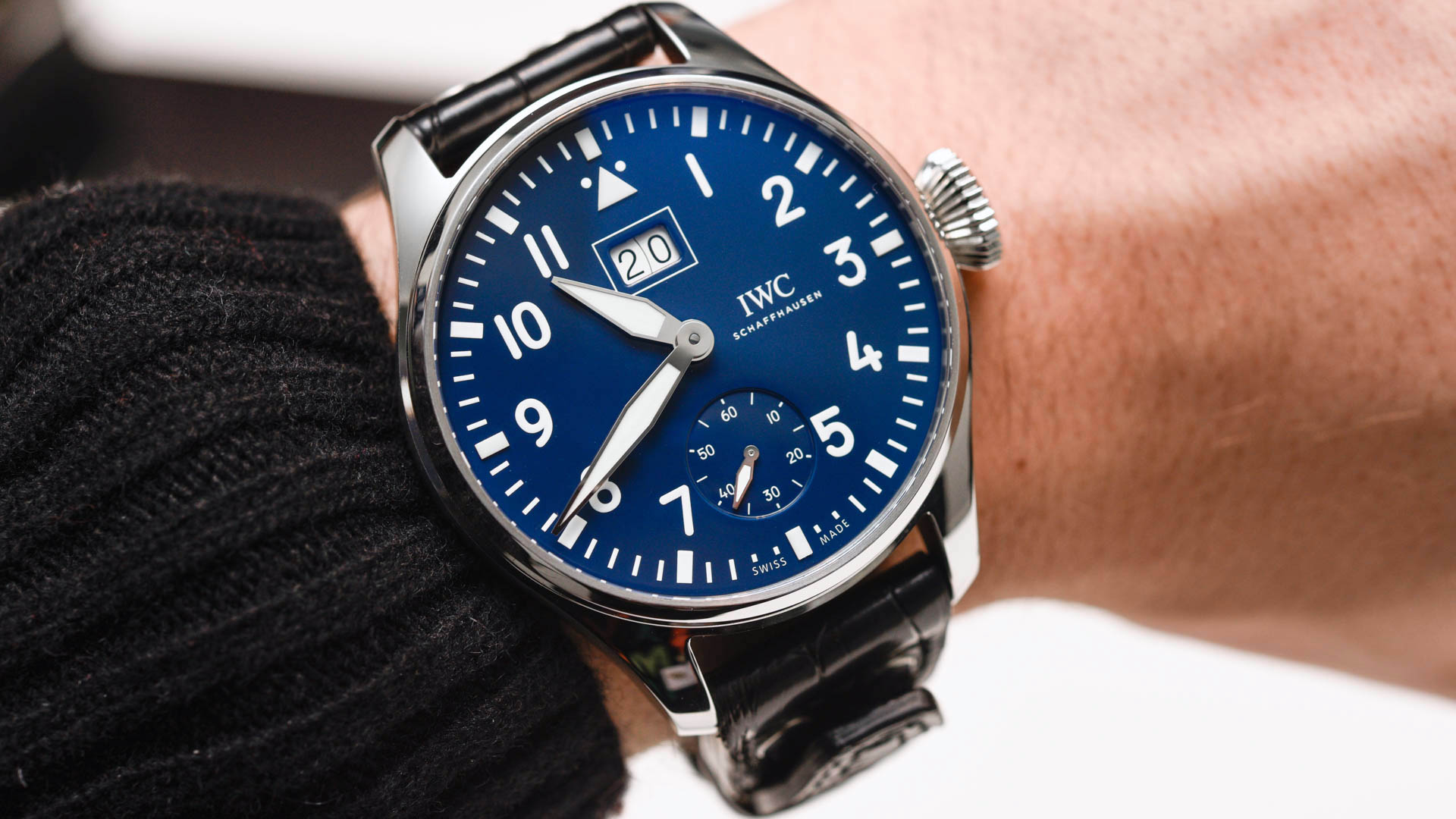 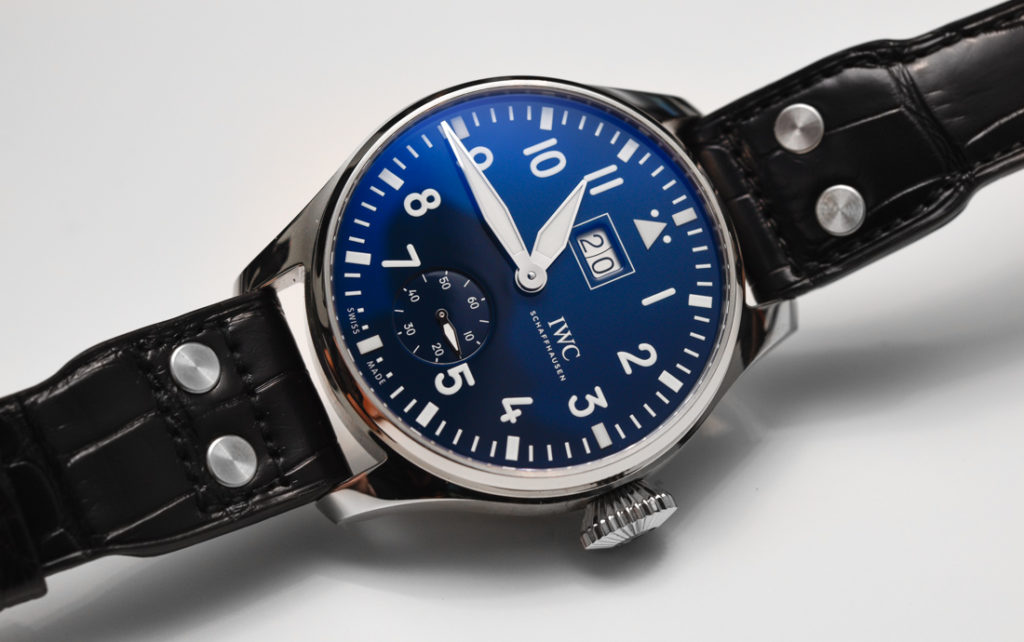 This was a big year for IWC. Celebrating their 150th anniversary, IWC launched an ambitious and impressive social media campaign to promote a slew of new watch offerings for the 150th “Jubilee Collection” – honoring a milestone the brand is rightfully proud of. Among the models were three new additions to the Pilot Collection. The first was an “affordable” pilot’s watch, the second featured an annual calendar complication, and the third is the IWC Big Pilot’s Watch Big Date Edition “150 Years” (we are going to call it the “Big Date Jubilee” henceforth) with both a white and blue dial option. While many of those models were simply a design refresh or new dial color, the Big Date Jubilee adds an entirely new model featuring a large double-digit date display complication under 12 o’ clock – a first for the Big Pilot’s collection, and a first for IWC’s entire modern pilot line. 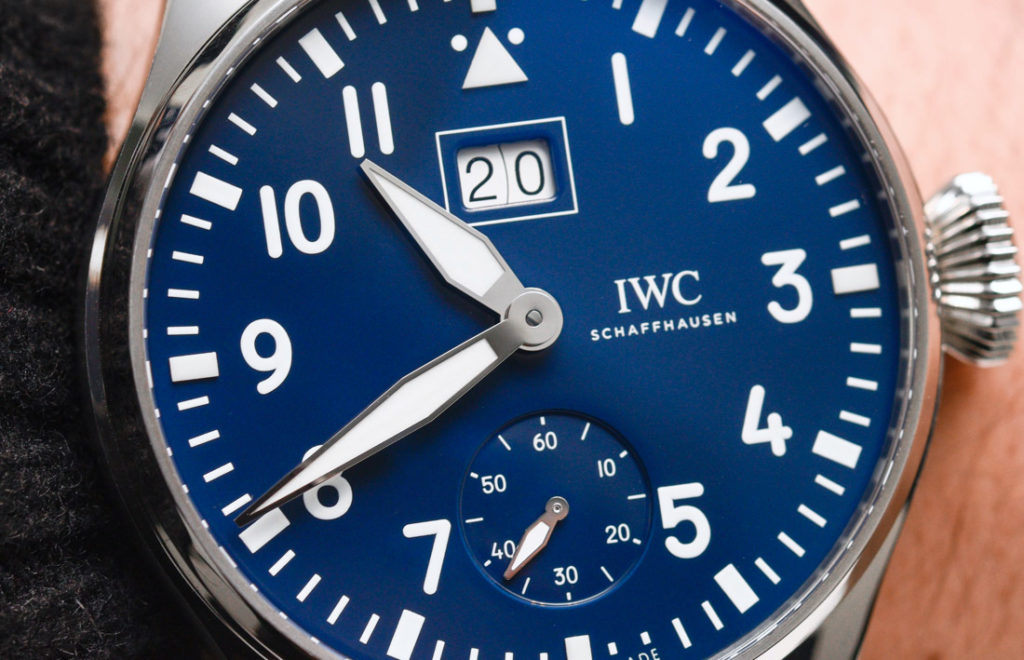 With Georges Kern at the helm, IWC’s strategy was to take existing collections and utilize the SIHH stage to overhaul and re-release one collection each year. Because of the simple, straightforward cycle, the releases were coherent, attractive, and some would say expected. Arguably pioneering a successful strategy, Kern eventually left for Breitling, and has implemented a similar model starting with the Navitimer Collection. Being the first year without Kern (as some have rightfully pointed out the timing), the 150th “Jubilee Collection” broke that mold at SIHH 2018 and released 14 watches spanning over the Pallweber, Portugieser, Portofino, Da Vinci, and Pilot’s collection. Though, the Big Date Jubilee has been a clear crowd front runner, and my personal favorite of the lot. 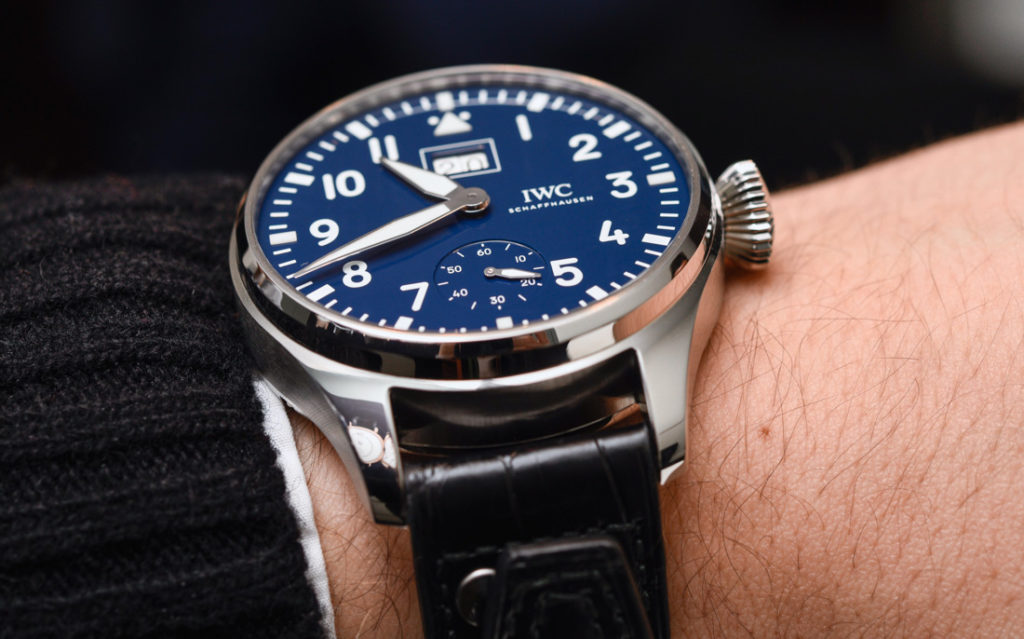 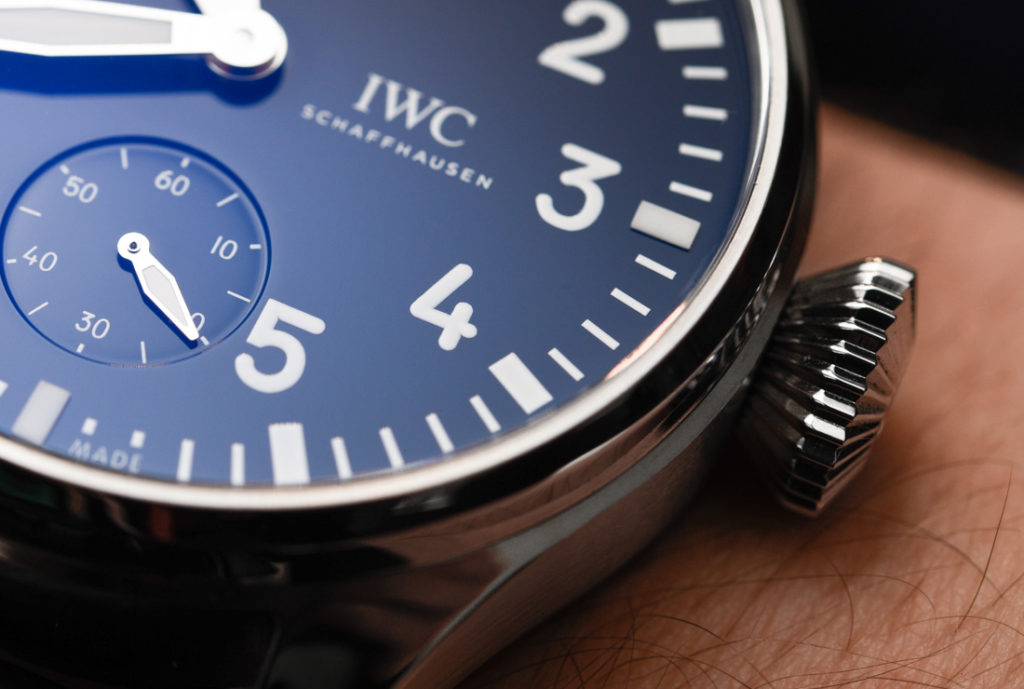 The Big Date Jubilee feels fresh, but still familiar. Like the others in the collection, the steel case measures in at 46.2mm but manages to shave a hair from the thickness, which measures in at 15.2mm despite the added Big Date function. Even still, at 15.2mm thick, we are approaching or passing many oversized 7750 based watches – and paired with IWC’s signature “Big Crown”, this watch, as expected, wears rather large on the wrist. I will say that the new polished case mitigates the size a bit because it presents a “dressier” timepiece, but it definitely demands some serious real estate. I do have to give the watch credit where it’s due. Despite it being noticeable and overstated, it doesn’t necessarily feel flashy and that’s not something I can say often about a polished watch of this size. 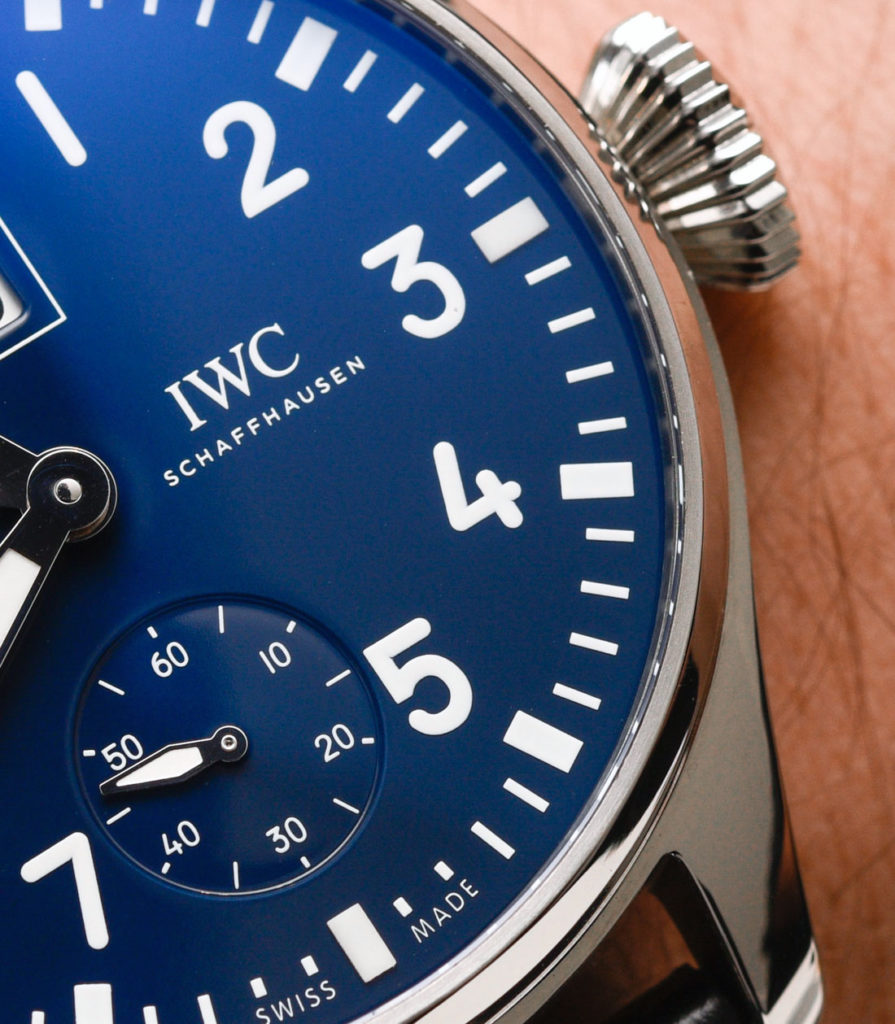 Pilot watches, by nature, need to be legible, and I would argue that while there are many brands that sell pilot’s watches, IWC has been a dominant figure in the space, and one that has consistently impressed with their ridiculously legible and coherent designs. The Big Date Jubilee is no exception. If there’s one thing this watch can’t be accused of, it’s being difficult to read. The striking lacquered blue dial is superbly finished and almost resembles enamel, and the brilliant white markers and luminous sword hands (perfect length by the way) provide a fantastic contrast against it. Even with the wicked glare of the AR coating on the sapphire crystal, the date and time are easily picked out without much strain or hindrance. The signature triangle 12 o’ clock marker doesn’t provide too much clutter above the Big Date, and the sub-seconds blends nicely against the dial. I applaud IWC for creating a large enough sub-dial to be legible without cutting off the indices or numerals on either side – something so many brands simply can’t seem to get right. 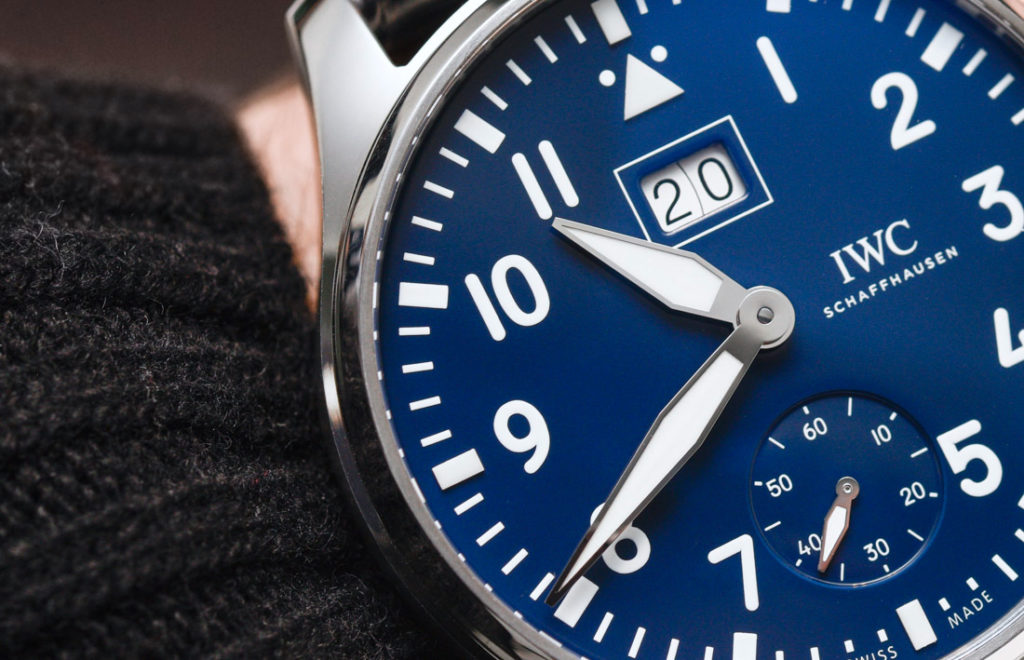 The Big Date complication does a fantastic job of melding into the dial without being a heavy or distracting feature. When I saw the initial press images, I was sure that IWC had a Pilot’s Watch with a Big Date but learned that they didn’t. The Big Date complication has historically been reserved for the Portofino Collection, a testament to the subtlety of the added complication. While I would normally advocate for a matching date window, the contrast fits the watch nicely. IWC even thinly framed the display with a thin white border to make it even easier to pick out at a glance. 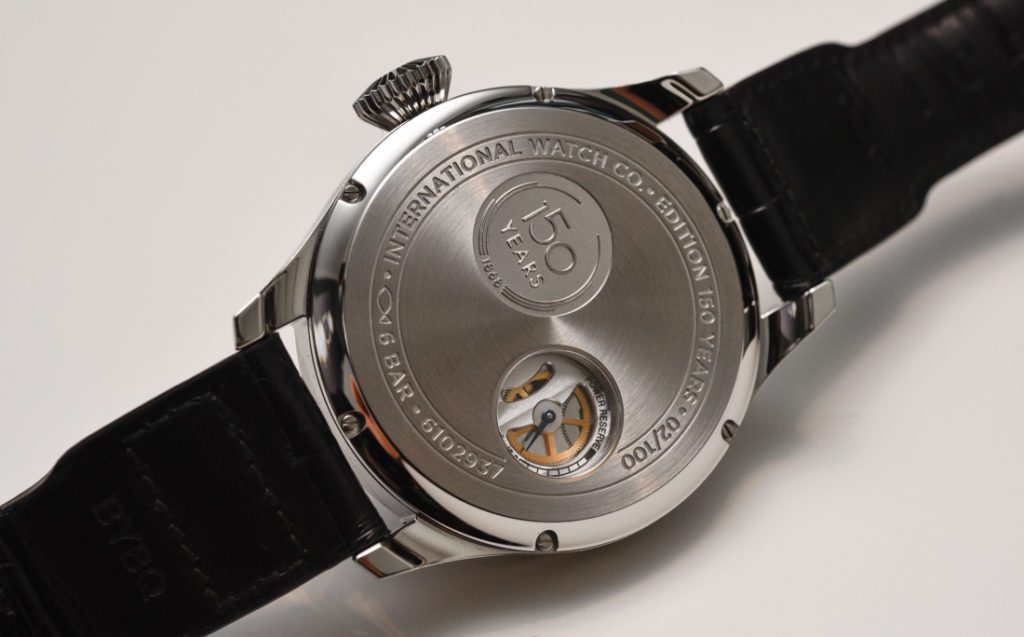 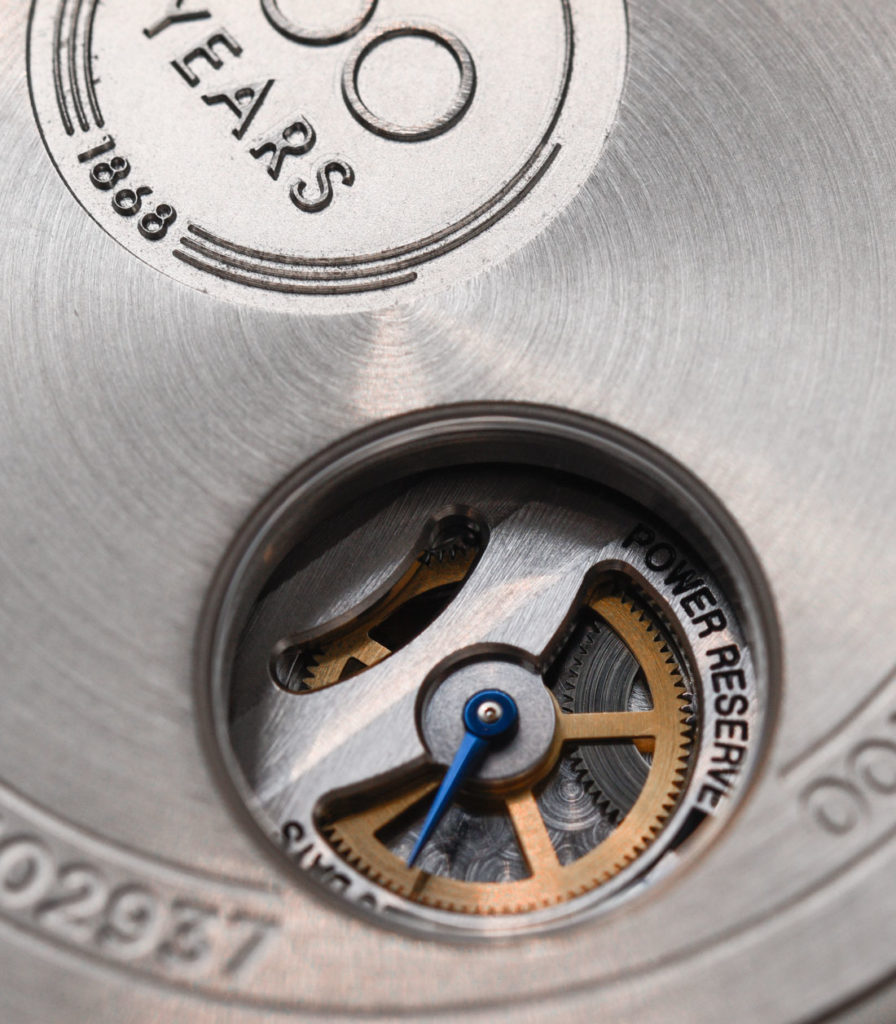 Since the Portofino is the “staple” Big Date model in IWC’s catalog, they used a modified version of what would have been the in-house 59220 calibre inside. Since the 59220 featured a day of the week and power reserve indicator, IWC stripped away the former and left the Big Date and small seconds counter while moving the 8-day power reserve indicator to the back of the watch – creating the new calibre 59235. The hand-wound, 4Hz movement isn’t visible through the caseback, save for a small window for the power reserve indicator. I’m a little disappointed in the lack of an exhibition caseback to display the new movement, though I suppose the utilitarian nature of the watch overshadows the missed opportunity. Regardless, the open-worked power reserve indicator and “150 Years” stamped caseback look neat and provide the watch with 60m of water resistance. 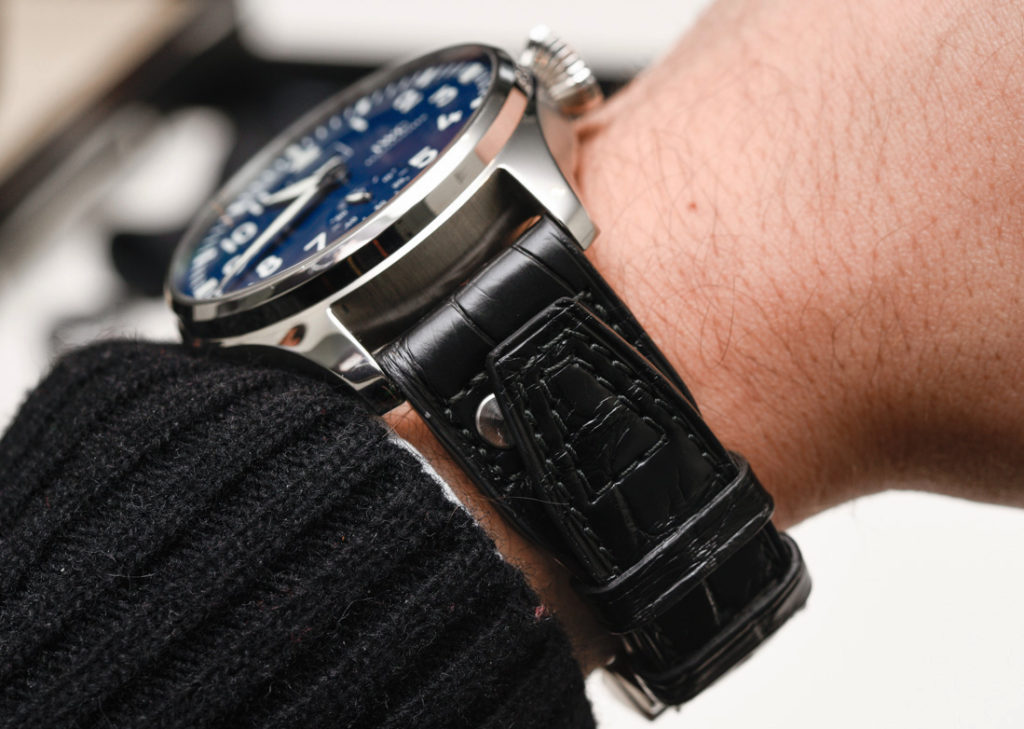 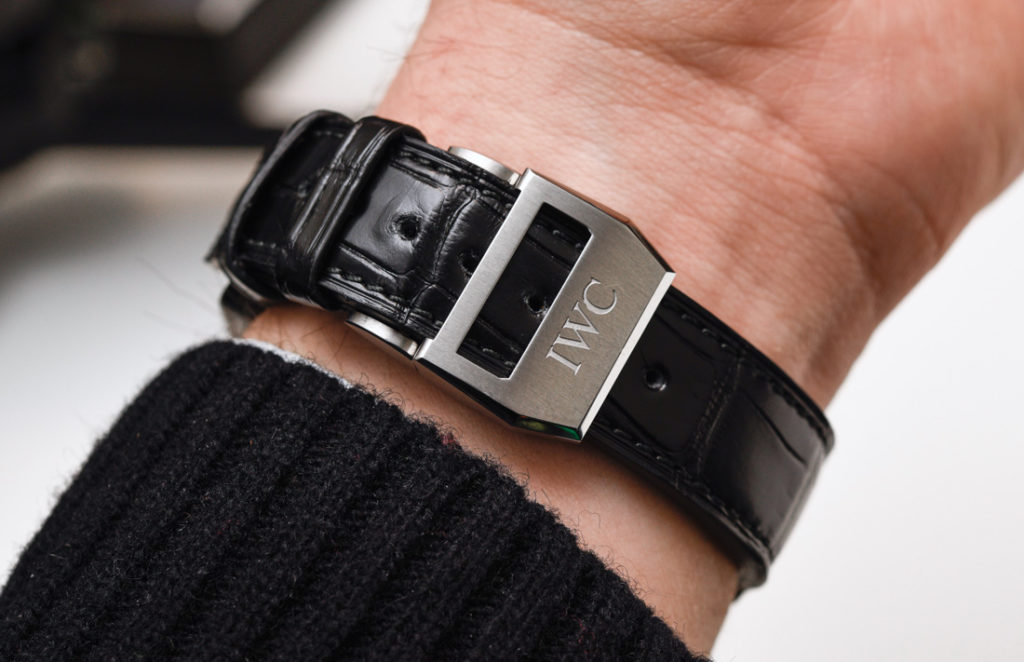 The strap is going to be controversial and the only reason I say that is because many enthusiasts have a love-it-or-hate-it relationship with the dual rivets and sharp, wide-set taper of the Big Pilot collection’s strap options. Many find it intrusive, “old-school,” or downright unattractive, though I’m on the team that finds it fitting into the collection. The Big Date Jubilee keeps the same style but utilizes black alligator leather instead of the standard calfskin offerings of previous iterations. To my recollection, this is the first time a modern IWC Big Pilot watch has used alligator leather in their designs. I feel the strap dresses up the watch without excluding it from a night downtown, but I’m having a hard time vibing with it on this particular model. It certainly doesn’t look bad or wear poorly, but I think swapping it for a dark brown or black calfskin strap without rivets would do a better job of dressing it up, and a dark blue leather with rivets would give it that sporty look I feel it’s flirting with. Instead, the Big Date strap splits the middle and included a little of both. 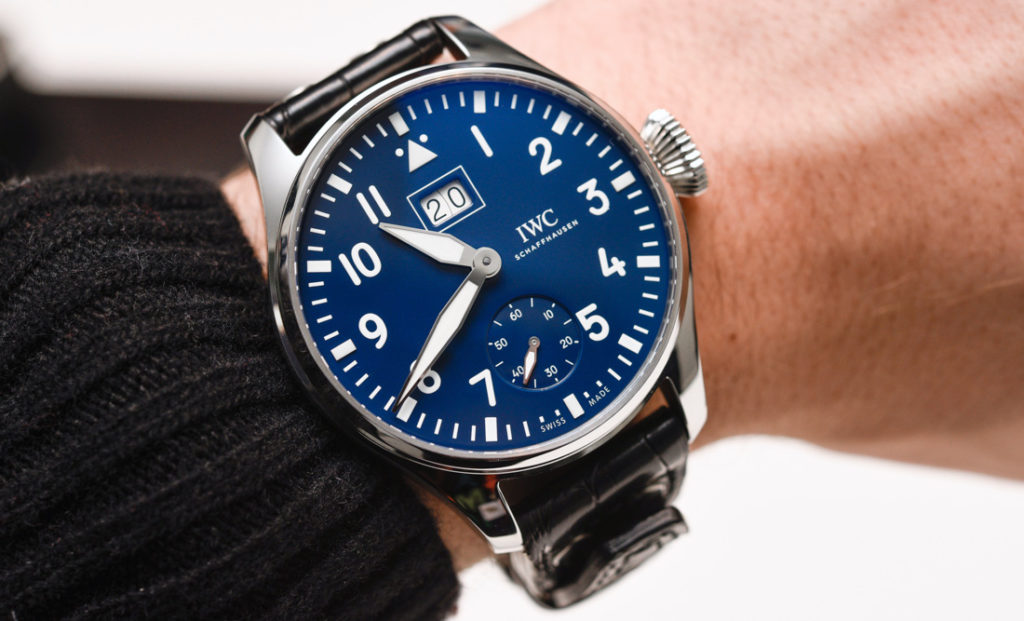 The Big Date Jubilee is a great example of IWC’s ability to tastefully introduce an all-new complication to a popular collection without taking a chainsaw to the overall design. Strap gripes aside, there was a lot of opportunity for gaudy, over-branded kitchyness when creating a 150th-anniversary piece. But instead, IWC stuck with what it’s been doing best lately: creating simple, elegant designs that don’t skimp on utility or legibility, without degrading the existing collection. Though many of the 150th Anniversary models are just some fresh dial colors and minor aesthetic tweaks, the Big Pilot Jubilee is a welcome, entirely new model that doesn’t disrupt one of IWC’s most popular watch collections – and I would like to see more of that trend in IWC’s future. The IWC Pilot’s Watch Big Date Jubilee 150th Anniversary will be limited to 100 pieces in each dial color and come with a price tag of $13,800. iwc.com