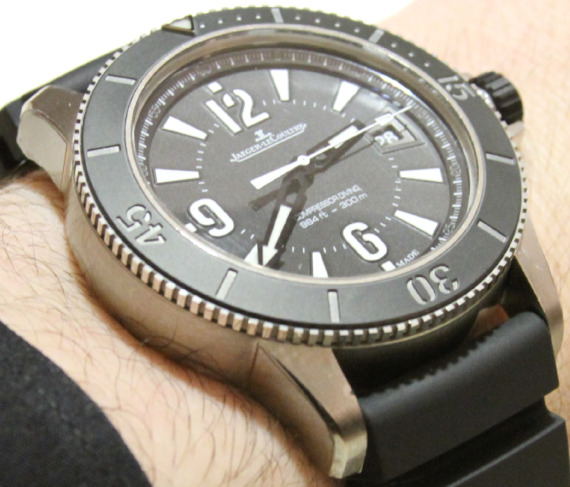 I was really excited about this watch when I got to play with it at SIHH 2010. Jaeger-LeCoultre has been working with the US Navy SEALs for a while making watches to suit their needs. Last year I wrote about my favorite version which was the Master Compressor Diving Automatic Navy SEALs Alarm watch. Now the brand has finally released the most “mainstream” version of the collection. It is a more basic three-hand version of the watch and is very pure in form. It really is a watch born out of an interesting partnership with people whose professional lives demand easy to use and durable timepieces (looking cool in the process is an unintended side effect).

Previous watches in the collection were 44mm wide and this version is 42mm wide (and 14mm thick). In a time when such sport watches are still made with larger dimensions, I was very curious as to why Jaeger-LeCoultre shrunk the size a bit. The reason was simple. The Navy SEALs guys thought the previous versions were a bit big and asked for it to be smaller. Simple enough, but it was good to learn that fact. You can see the watch size on my wrist is prominent but not too big. It makes for a very capable daily wear, as well as a serious tool. The Navy SEALs were very interested in legibility. When it came down to it, this is their biggest request in a watch (aside from the fact that it should stand up to their abuse). Jaeger-LeCoultre designers spent a lot of time tweaking the dial to optimize how easy it is to read. I think that you will agree the high contrast dial looks highly legible and the hands stick out nicely. And especially on this watch, there are no subdials or other functions to take away from pure ease of use. Plus, special care was taken to make sure the lume was highly viewable in the dark and underwater. So in all, it succeeds in its intended purposes. 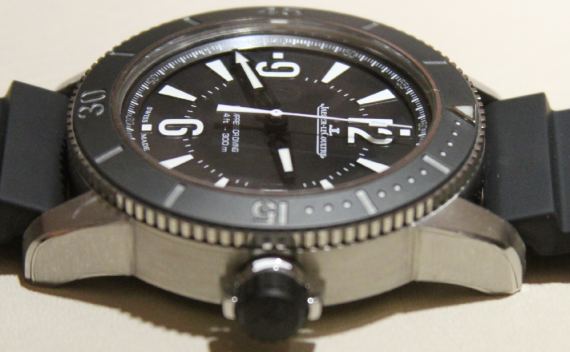 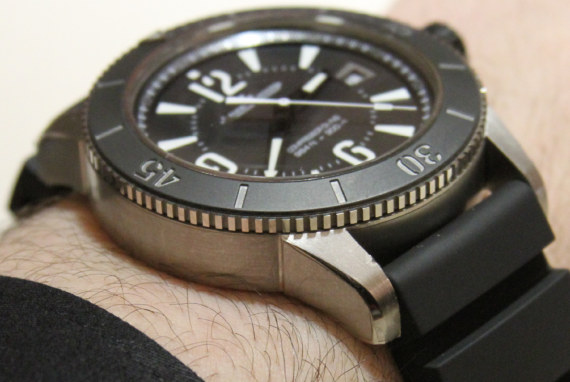 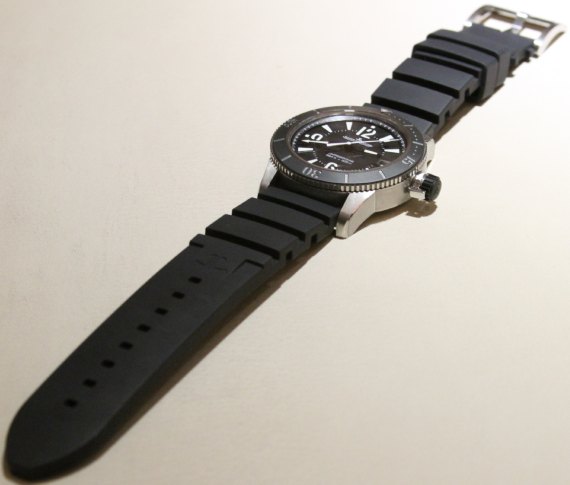 Inside the watch is the in-house made Jaeger-LeCoultre automatic mechanical caliber 899 movement. It has 43 hours of power reserve and a gold weighted automatic rotor. Like all Jaeger-LeCoultre “Master” watch movements, it bears the seal of the rigorous “1000 Hours Control” which is an in-house testing for quality, durability, and accuracy in each movement sold. The functions of the movement are the time and date. Operating the crown is a bit different than the standard screw-down crowns people are typically used to with diving style watches. It used the special locking crown guard found on the Master Compressor models. It is easy enough to use, and a reminder that you have a Jaeger-LeCoultre on your wrist. Most people will never see the movement, but it is in there and finished nicely. Jaeger-LeCoultre finishes all their movements with a nice level of decoration that the guy who is servicing your watch in the future will appreciate. 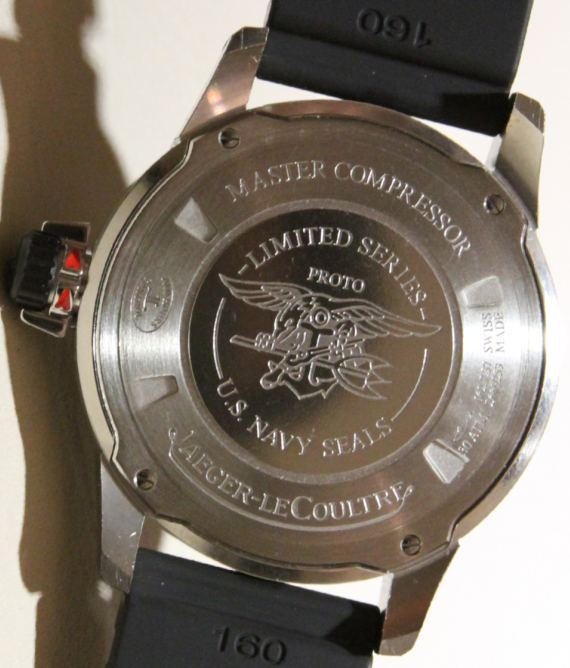 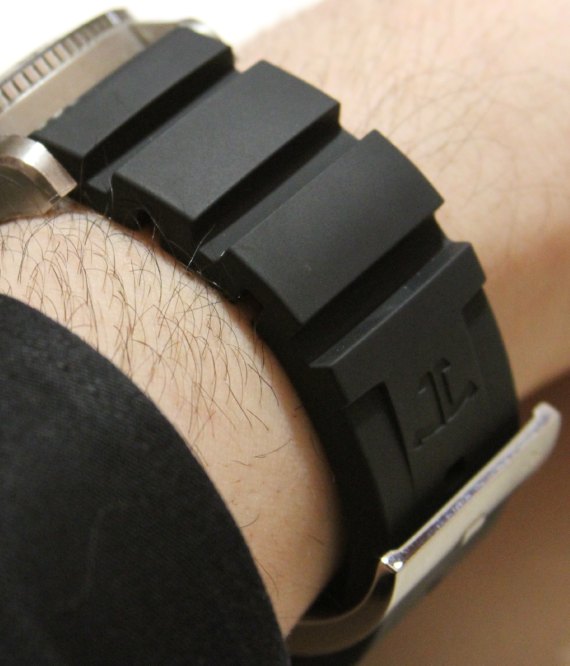 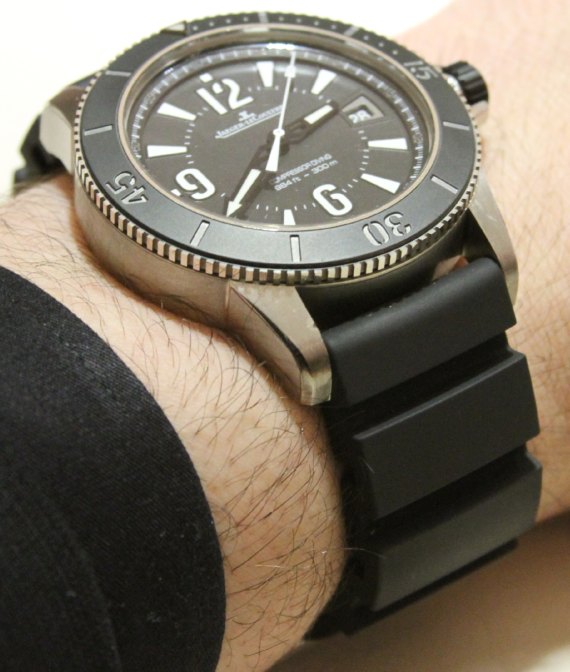 Like I said the case is 42mm wide and in steel with 300 meters of water resistance. Finishing is really cool with some contrast polishing (such as on the lugs). The rotating diver’s bezel is done well. The edges are a little bit sharp, but it does have a cool precision cut feel to it. The indicators on the bezel are cut in to the black surface with the numerals in a stencil font that matches the unique stencil font on the watch dial. There are tons of little style details all over the watch that are hard to tell because it looks like such a functional instrument. It really is a “pretty machine.” Take for instance the tapered date window frame to help with keeping the shapes and lines balanced on the dial and the nicely applied hour markers on the face. Given the pedigree of the watch and the price, you can be sure that Jaeger-LeCoultre made sure the details on the watch will satisfy you and the demanding members of the Navy SEALs.

Going back to the Navy SEALs, my understanding is that some of their soldiers are not only working on helping with the design of these special Master Compressor watches, but also wearing and testing them. This “in the field” feedback is helping Jaeger-LeCoultre make as good a timepiece as possible. Most of the buyers of these watches are not going to be Navy SEALs but the emotional connect to such active individuals is an important selling point in making these watches desirable. There will be three limited editions of the Master Compressor Diving Automatic Navy SEALs watch. Each is the same timepiece, but with three strap options. There is the techy looking black rubber diving style strap (as seen in the pics), and the there is another black rubber strap that is textured to look like a three-link bracelet, followed last by a more terrestrial utilitarian looking crocodile strap.