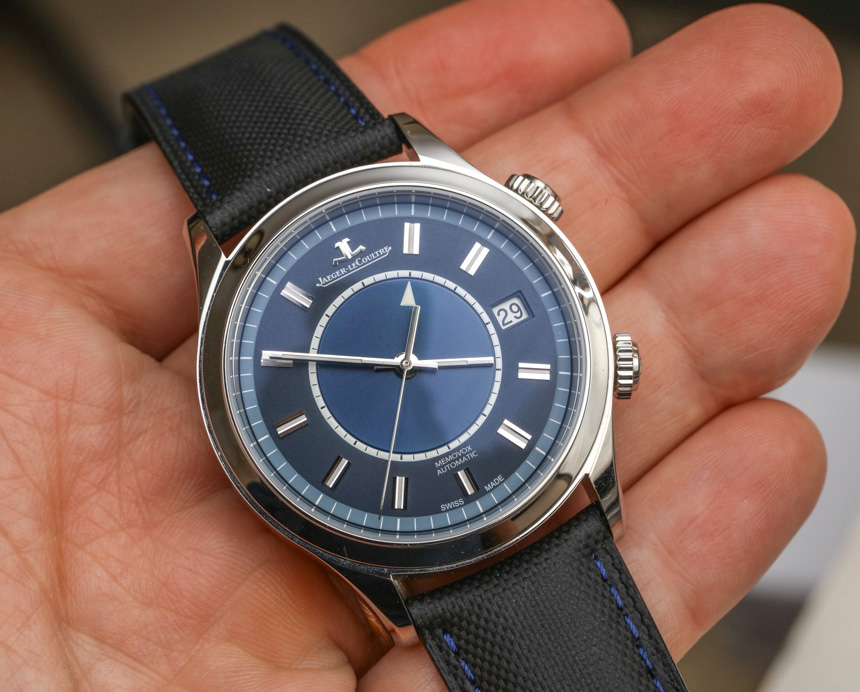 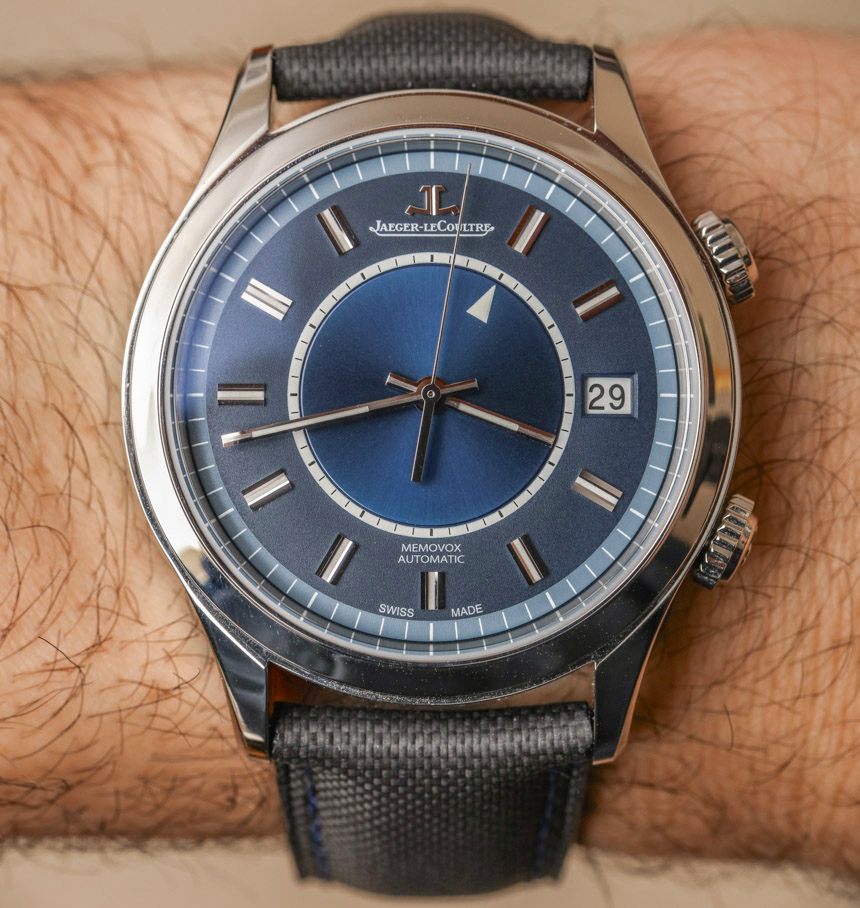 Jaeger-LeCoultre brand fans will no doubt enjoy the news that the Memovox collection is back – starting with this brand boutique-only Jaeger-LeCoultre Master Memovox Boutique Edition limited set of watches. The Swiss brand claims that this refreshed retro-style release of the brand’s cult favorite alarm watches is due to the Memovox’s 60th anniversary, having been debuted in or around 1956. It has been a while since one of the major luxury watch brands even released a new alarm watch. While chiming musical mechanical watches as high-end exotic treats are relatively popular, alarms are not. The real question of the Memovox in terms of success is whether or not Jaeger-LeCoultre can get fans excited about this complication once again, and at this price point.

Aside from an odd watch by Tudor and some Cricket watches produced by Vulcain, there are very few modern alarm watches being produced. I think part of the reason for that is due to the purpose of the watches themselves. Herein lies an incredible irony. The alarm complication isn’t really that at all – at least not in the modern sense. We tend to think of a primary function of alarms being as something to wake us up from sleep, but that wasn’t the purpose of these watches. Rather, it was to set an audible reminder about something that you needed to do. 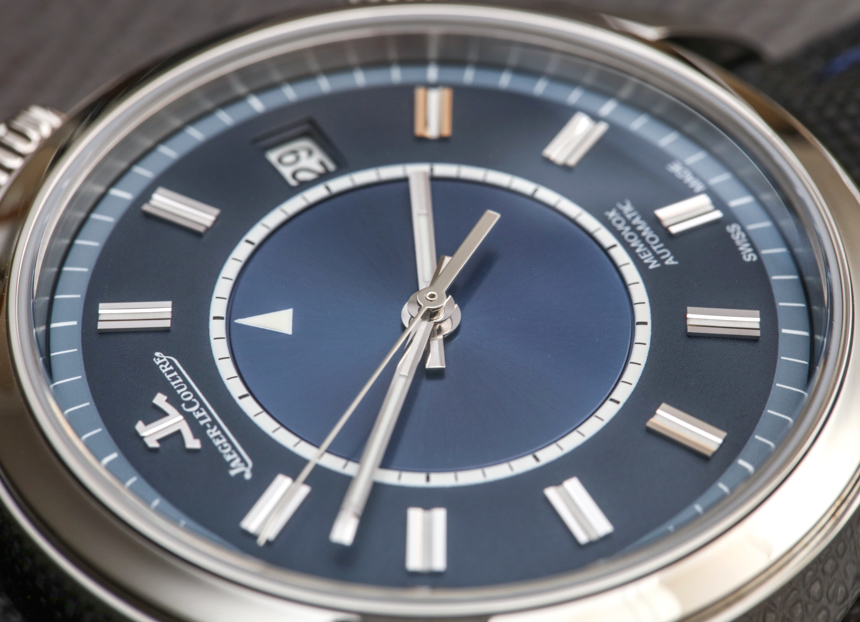 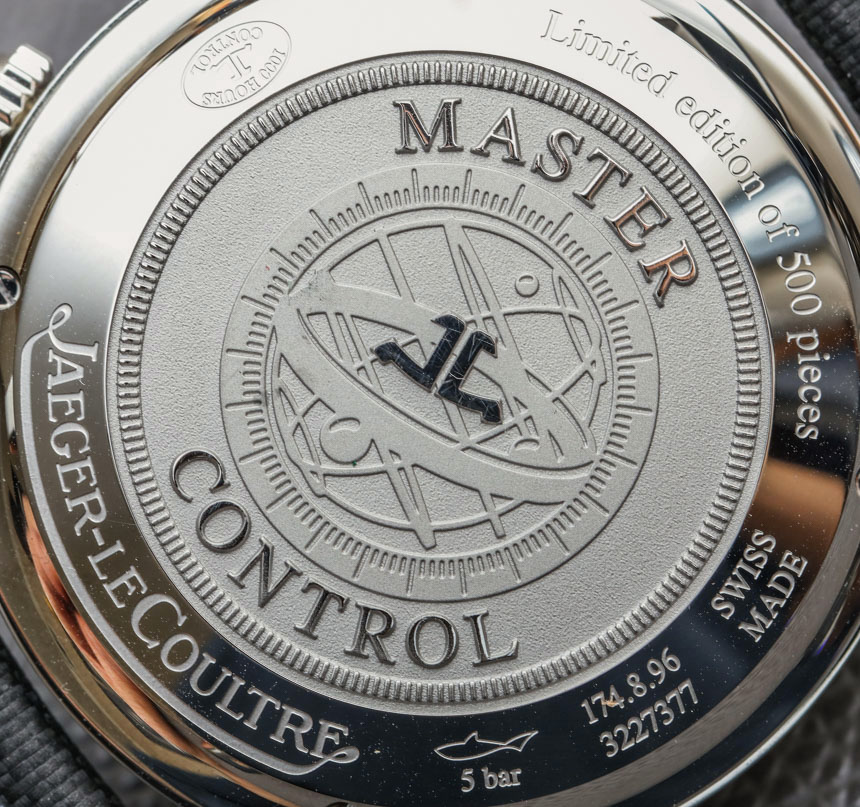 Prior to a digital world, having a reminder device on your wrist was actually quite convenient. You could only set watches like the Memovox a limited time in advance, so it was best to remind you of things you needed to pay attention to at times in the near future that didn’t require an exact minute and second. Thus, this functionality is still theoretically useful today (like a mechanical chronograph), and in that regard, it is odd that alarm watches are not more popular. 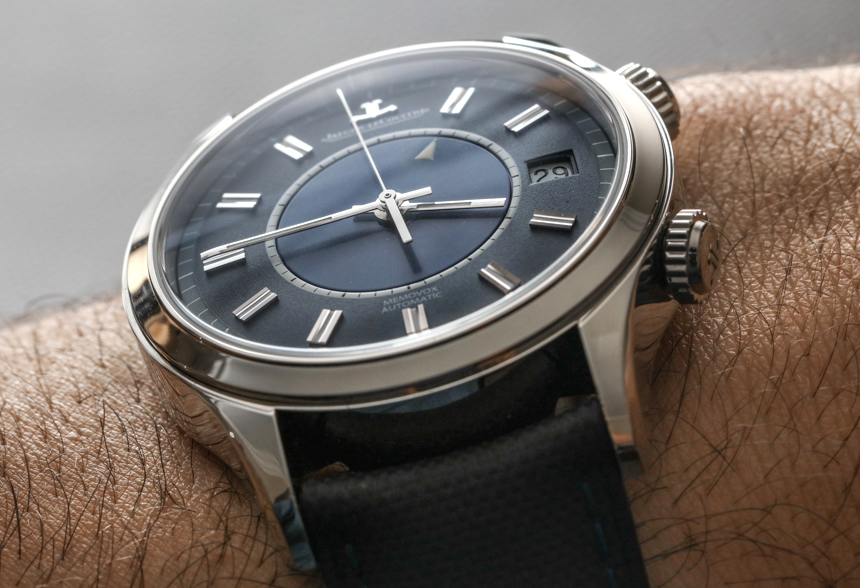 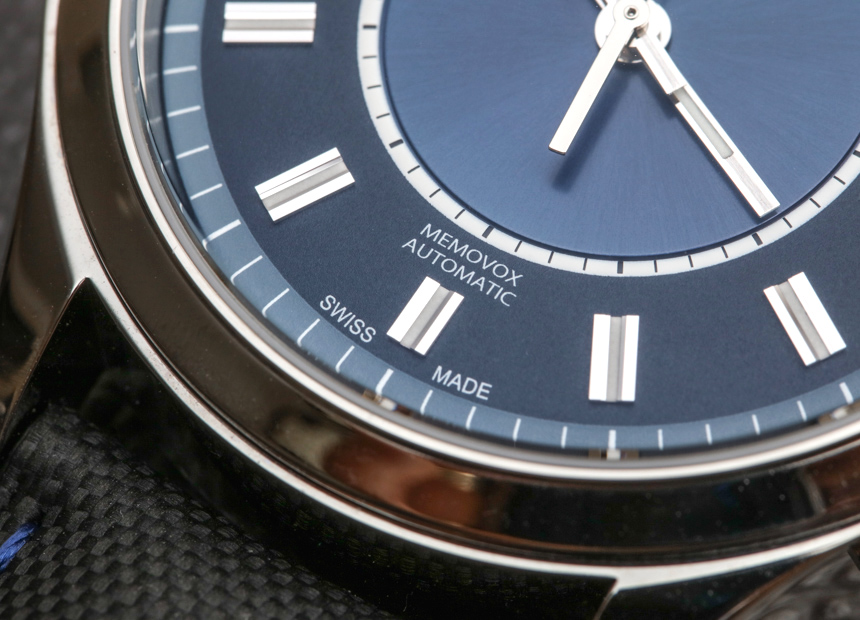 However, I think the problem is in the noise itself. Minute repeater watches, for example, have a lovely musical quality to them. Alternatively, most alarm watches have a buzzing or vibrating sound that is… well, far less elegant. For an alarm to be heard, it must be louder than a soft chime, but of course it needs to sound pleasant. I don’t think the sound of the in-house-made caliber 956 in the Jaeger-LeCoultre Master Memovox is that bad, actually. Rather than being a mechanical buzzing, it is more of a rapidly repeating chiming which is a bit more melodic than the admittedly louder, but often more annoying-sounding mechanical alarms you can sometimes find elsewhere. 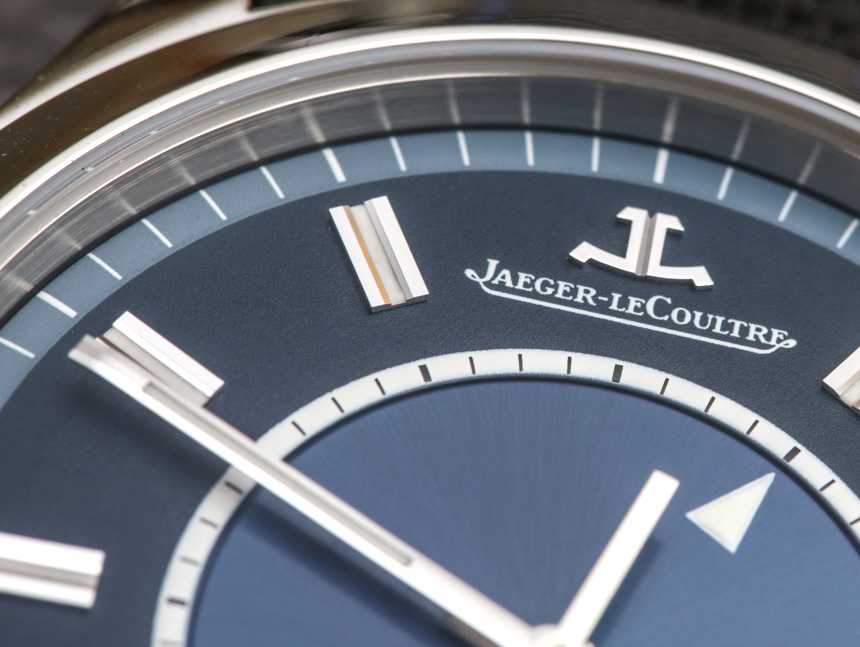 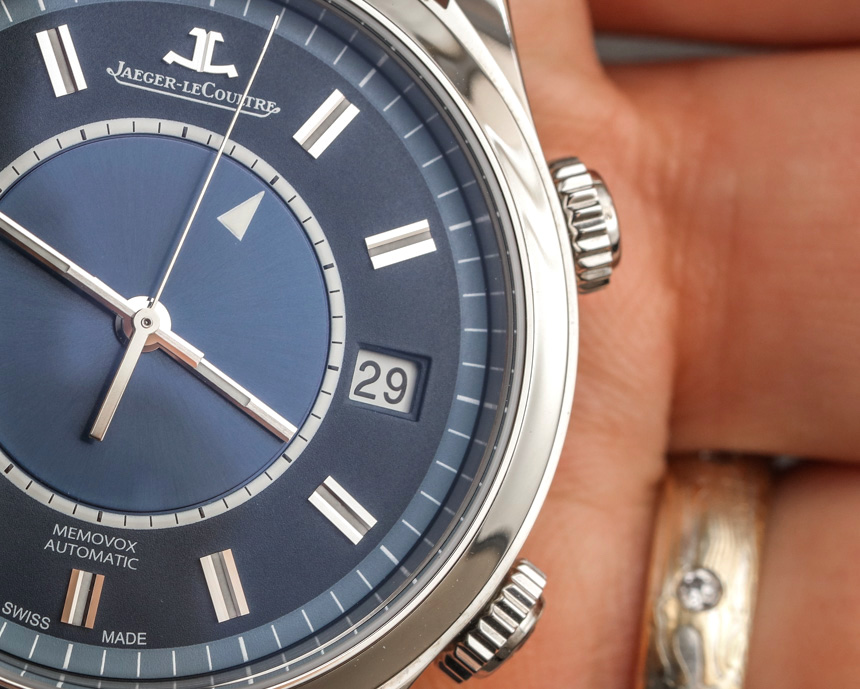 This is part of a series of experiments the watch industry is doing in order to sell more directly to consumers within their brand boutiques. A common trend along these lines is focusing on lower-priced steel watches as opposed to precious metal-cased watches as boutique exclusives. This dark gray/blue model will be a limited edition of 500 pieces, and as I noted, I fully expect for at least 1-2 additional Master Memovox watches to show up at Jaeger-LeCoultre stores and authorized dealers in 2017. 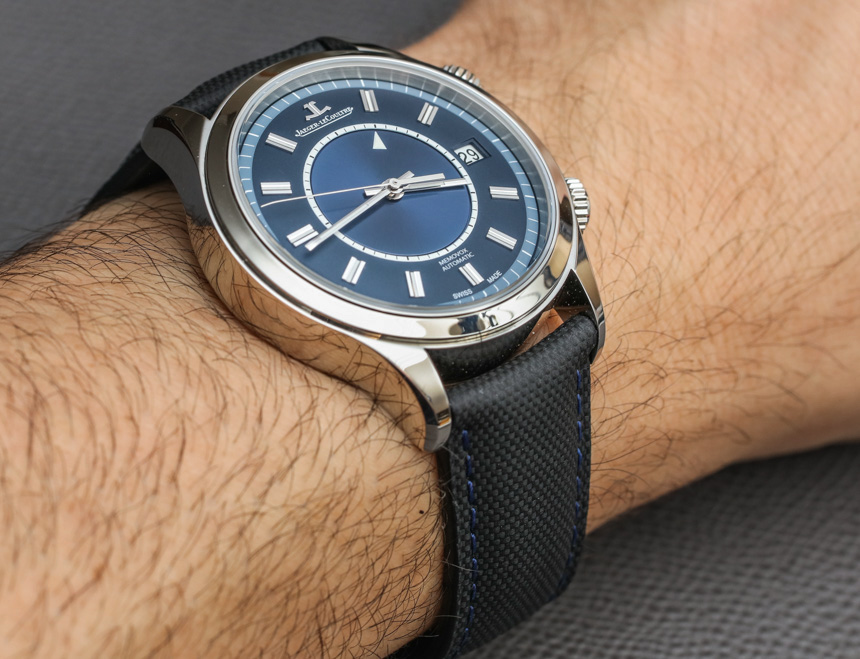 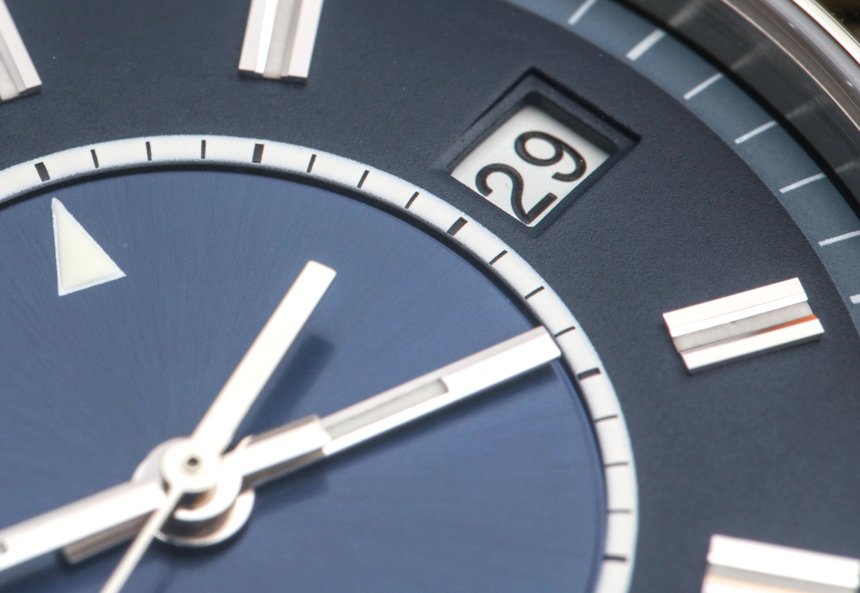 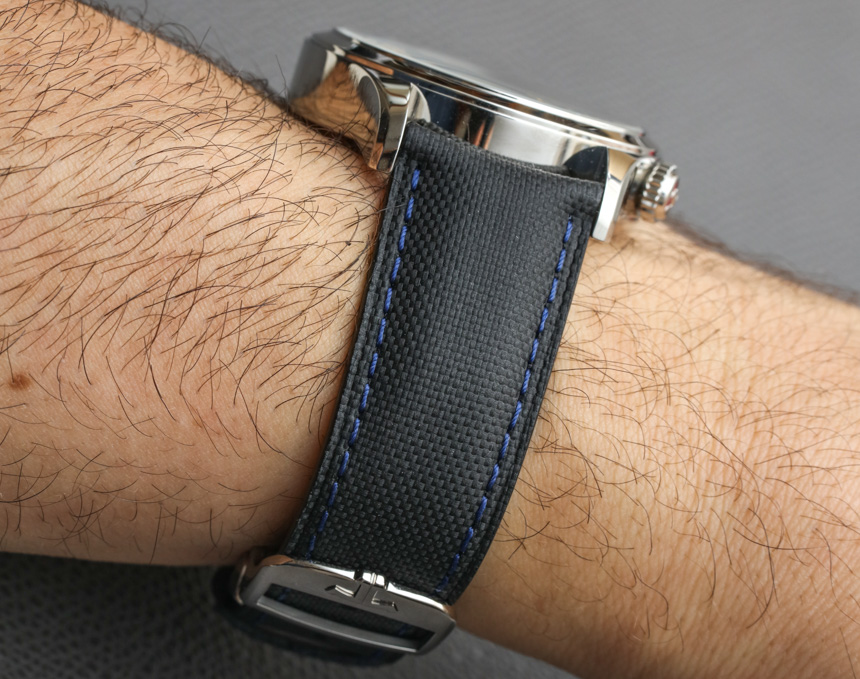 Design-wise, the 2016 Jaeger-LeCoultre Master Memovox Boutique Edition is a modern interpretation of the vintage models from the 1950s. Size is more modern but still medium, as it is set in a 40mm-wide case which is water resistant to 50m. I personally think they could have gone to 42mm wide with ease. The case is a thick 14mm because there needs to be space in the rear for the alarm coil and for sound to resonate. If you are a fan of Jaeger-LeCoultre’s Geophysic collection, you’ll likely also have a fondness for the Master Memovox. 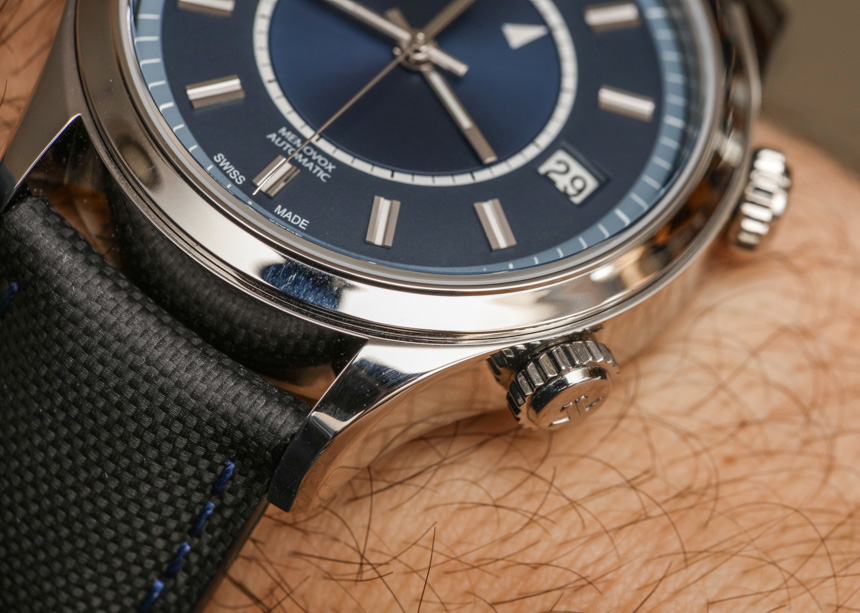 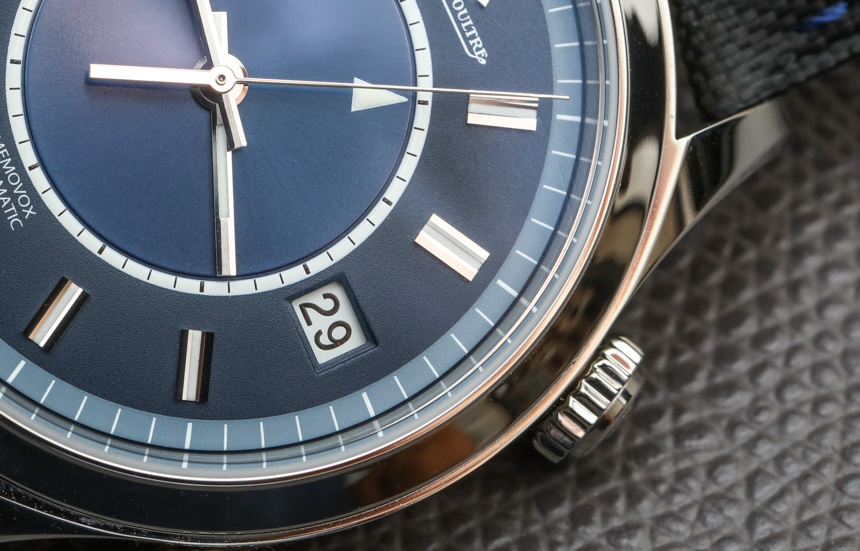 The real trick of the original Memovox was having a disc on the dial to serve as the alarm setting display, as opposed to a fourth hand. This disc has a small arrow on it, painted with luminant, which is used to set the alarm time. The way it works is very simple. To set the alarm, you use the upper of the two crowns on the side of the case. Pull the crown out and turn it in one direction to adjust the alarm time, only in one direction. 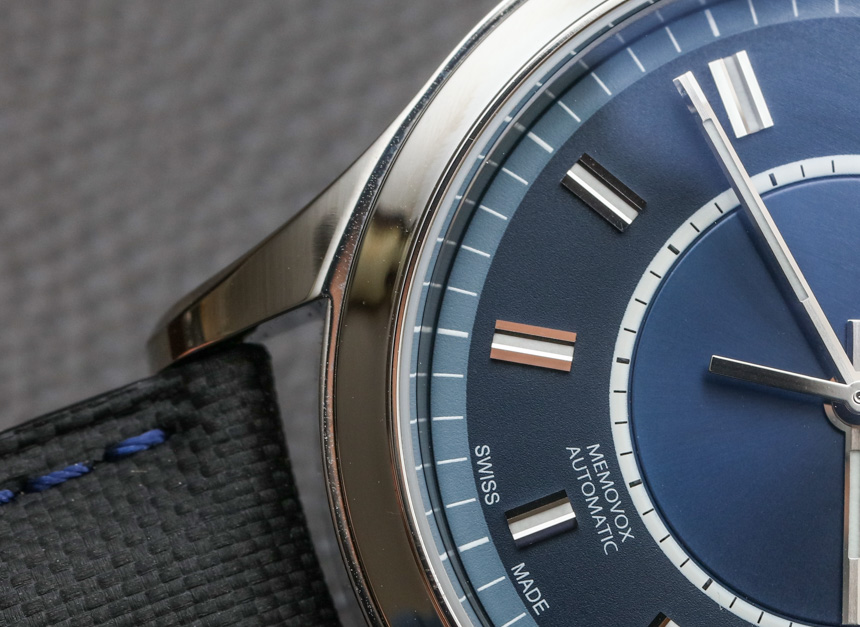 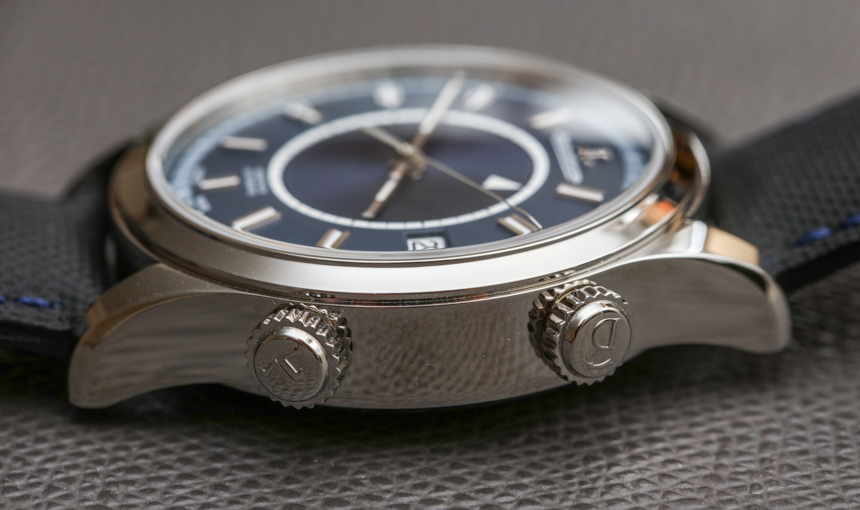 Turn the upper crown in the other direction and you adjust the date. This crown is also how you turn the alarm on or off. This feature is extremely basic as well, insofar as that the alarm only works if the separate mainspring for it is wound. The alarm functions until that spring is wound down. Once it is, the alarm will not work again until you wind it back up. A fully wound alarm spring might allow for the alarm sound to go for 10-20 seconds or so until it dies out. 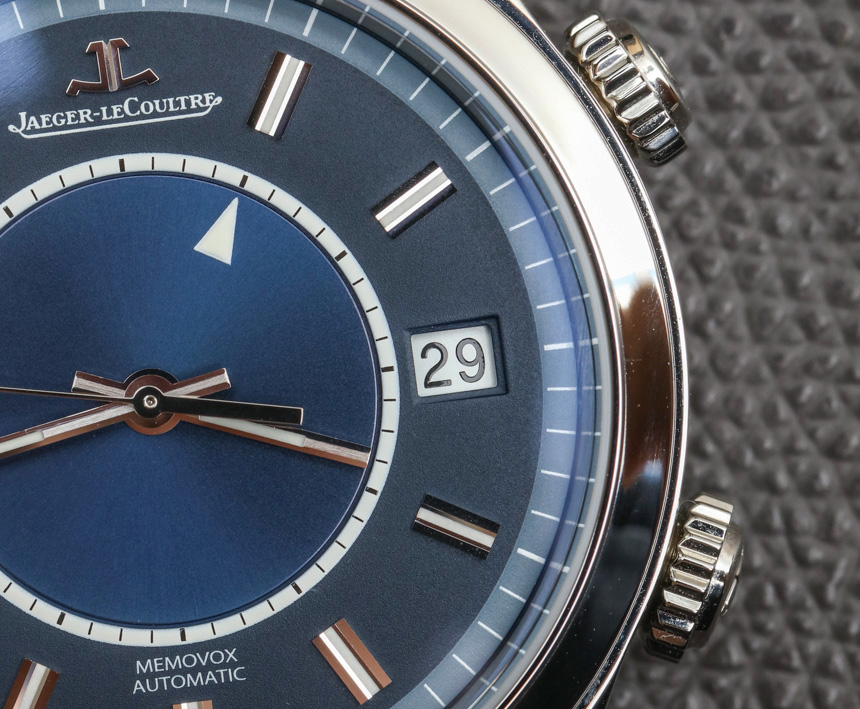 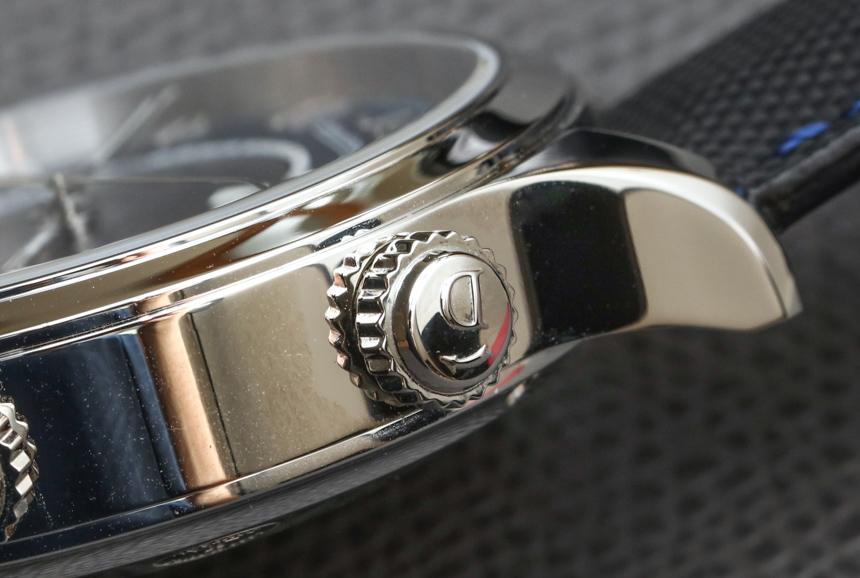 I really would have liked Jaeger-LeCoultre to take this opportunity and make this complication a bit more user-friendly. Yes, it is cool that they remade a popular enthusiast watch, but they really didn’t do much to modernize this complication. It just feels like a missed opportunity. What could they have done? A number of things, really.