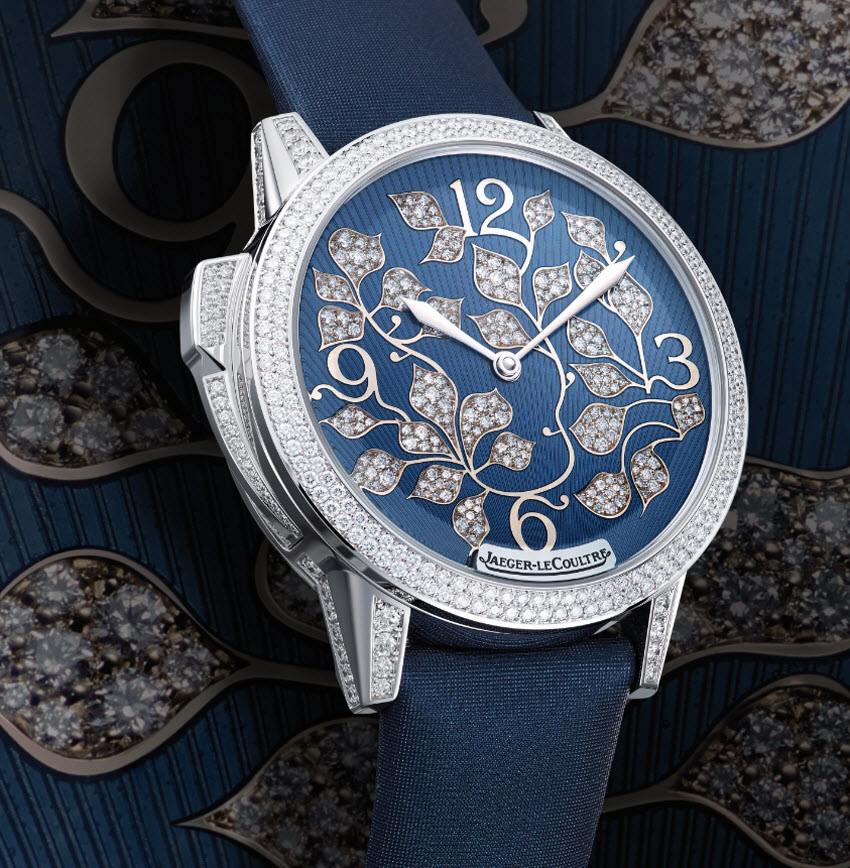 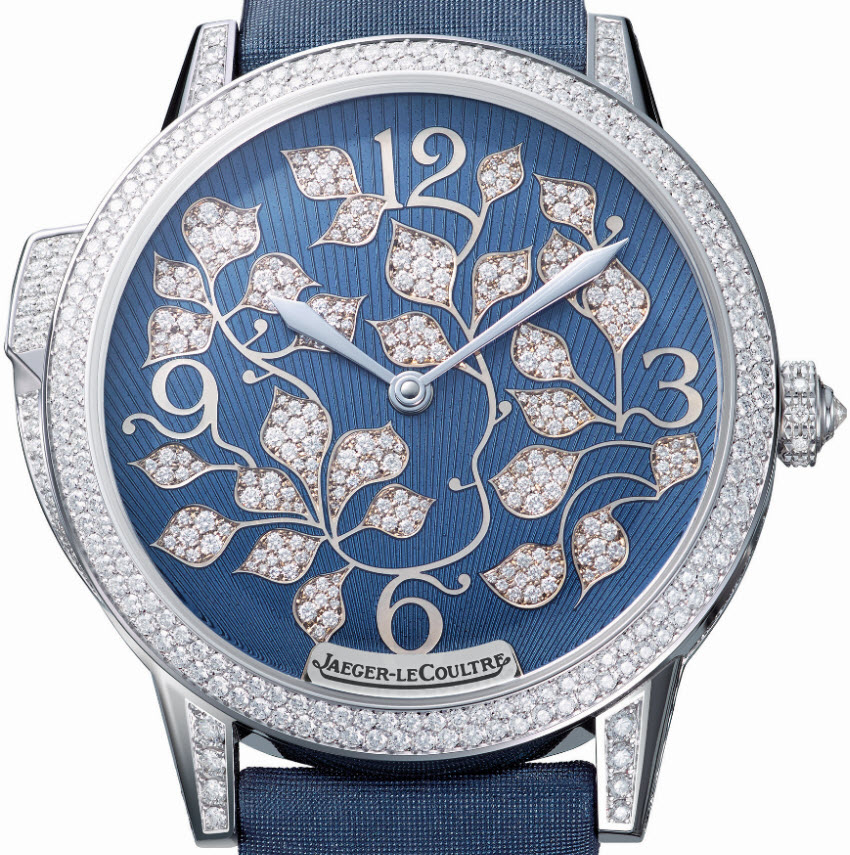 Jaeger-LeCoultre has captured my attention with the addition of the first minute repeater to the Ladies Rendez-Vouz Collection: the Jaeger-LeCoultre Rendez-Vous Ivy Minute Repeater. As its name suggests, this ivy-encrusted timepiece is of undisputed elegance – and that elegance is much more than skin-deep. In 2012, Jaeger-LeCoultre debuted the Rendez-Vouz Collection to provide women the chance to own serious mechanical complications – rather than the more ubiquitous “downscaled” mechanical versions, or the usual dressed up quartz. Despite its recent inception, the Rendez-Vouz collection already boasts quite an impressive repertoire, including ladies’ watches equipped with genuinely high-end complications, such as the tourbillon or celestial and perpetual calendar timepieces. 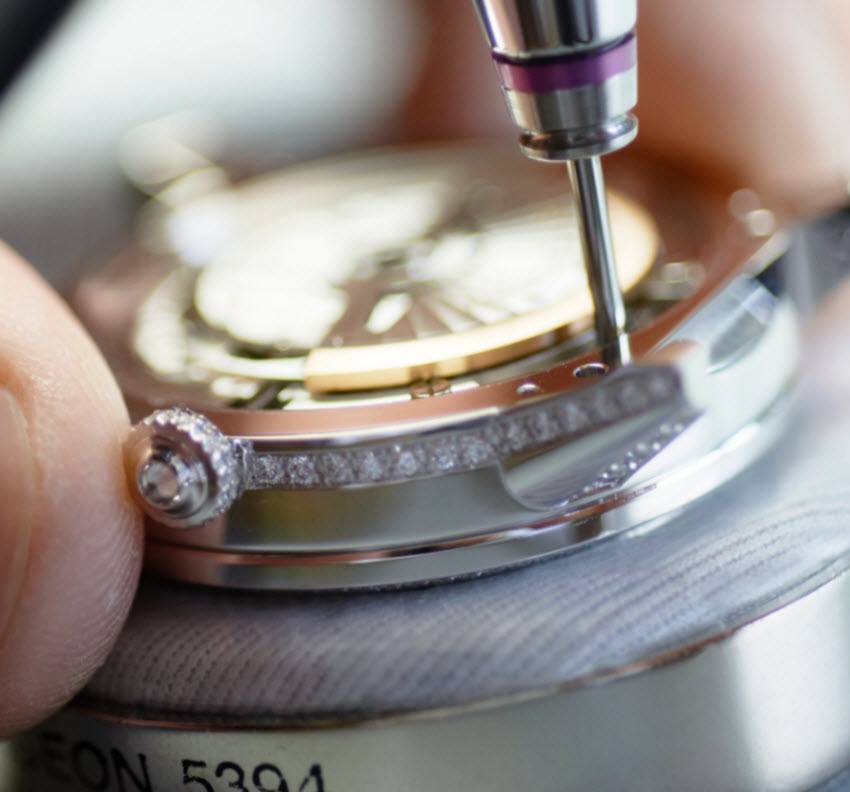 Sure, tourbillons and perpetuals are rightfully desirable features in any and all mechanical watches, but as far as complications go, minute repeaters are in a class of their own. Emitting chimes of various tones in varying degrees of loudness, the minute repeater “repeats” the hours, quarters and minutes, at any given time, when the wearer initiates the function via a slider or pusher. As to its invention, the English currently hold the claim to fame. The Reverend Edward Barlow is accepted as the inventor of the first repeating clock, as far back in time as 1676. Much like most inventions that had centuries to develop, the repeater too started out as a rather simple construction that comprised a rack and snail mechanism.

Later, Daniel Quare did, however, lay claim to the invention of the striking mechanism in a watch. The chiming mechanism is believed to have been useful as it allowed the wearer to know the time in pitch black darkness – i.e. without having to light a candle, at a time when electricity (or Super-LumiNova) had not yet been invented. The task of fitting bells, wire gongs and the time-tracking striking mechanism within the confines of a watch was quite complicated, rendering the watch repeater an object of high luxury. Consequently, unlike, say, the tourbillon, chiming functions are still not available in the few-thousand Dollar segment – and likely never will be. Of course, nowadays, we have numerous gadgets to remind us of the time and plenty of artificial light to see by, and yet mechanical minute repeaters, especially those crafted by high-end watch companies, remain highly coveted items.

The 39mm wide, white gold cased Jaeger-LeCoultre Rendez-Vous Ivy Minute Repeater has a whisper of sensuality, evoked by the whimsical diamond encrusted tendrils of Ivy shimmering with a dusting of snow above the blue sunburst guilloche motif. Before one floats off into hazy dreams brought on by the sheer elegance of the dial, one must be aware of the powerful movement that lies beneath. Although, a watch with a diameter of 39mm is on the larger size for a woman’s watch, it is quite snug for the complex design of a minute repeater. To adapt to the size limitations, Jaeger-LeCoultre created an entirely new movement, the Calibre 942A. Creating a new movement is a common challenge for Jaeger-LeCoultre, who has already created close to 1250 unique calibres, filed about 400 patents, and come up with some of the most ingenious inventions – many of which were designed out of sheer necessity, such as the polo-inspired Reverso. 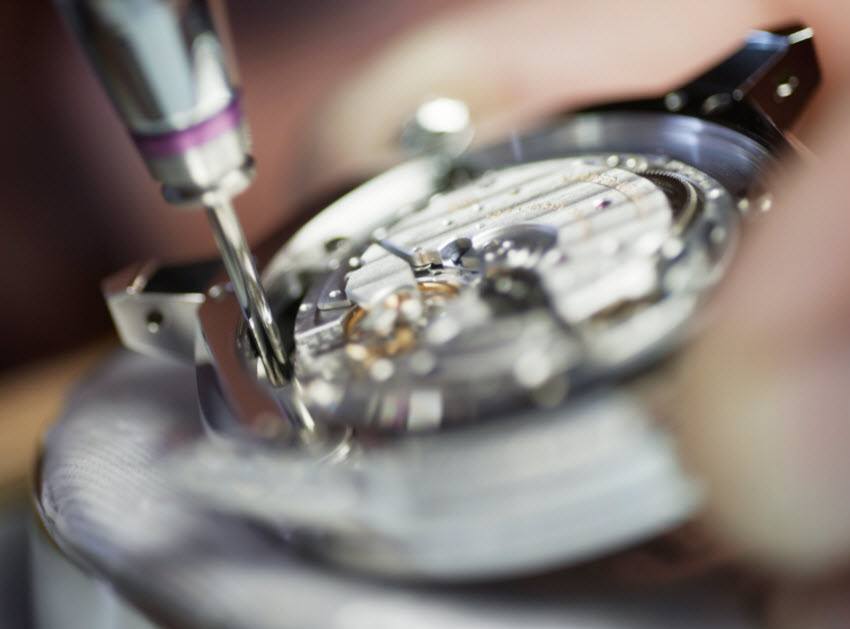 The Calibre 942A is a remarkable automatic movement that beats at 28,800 vibrations per hour and offers 43 hours of power reserve. Therefore, the Jaeger-LeCoultre Rendez-Vous Ivy Minute Repeater is not only one of just a handful of minute repeaters designed specifically for women, but it also is a chiming watch with automatic winding – another highly unusual combination. The minute repeater is equipped with a host of unique adaptions which result in a complication of supreme technicality. In the Calibre 942A, Jaeger-LeCoultre has replaced its traditional hammers as found in the Hybris Mechanica Grande Sonnerie watch, with trebuchet hammers.

You may be familiar with a trebuchet construction from medieval times, where flaming projectiles were flung through the air at fortified castles. Of course, the trebuchet hammer construction within the refined Jaeger-LeCoultre Rendez-Vous Ivy Minute Repeater is for a far less combative purpose. The unique patented construction of the two trebuchet hammers ensure maximum transmission of energy as they strike, just once, the two crystal gongs attached to the sapphire crystal, producing a “loudspeaker effect.” The Jaeger-LeCoultre Rendez-Vous Ivy Minute Repeater emits a high, clear sound, resulting from an entirely new invention of unique construction.

For full appreciation of the crystal-clear melodic sound without inference from the mechanical oscillations, Jaeger-LeCoultre has added a silent regulator – an indispensable component of the chiming mechanism that is known to create a subtle but audible buzzing noise when the chiming is in operation. The resulting movement emits less noise, allowing for an easier appreciation of the sound of the trebuchet hammers.

In addition, Jaeger-LeCoultre has maintained the slim elegant design of the case, by replacing the usual minute repeater slider with a push button. If the push button is unintentionally pressed after activation, a security system has been installed to stop another activation, thereby preventing damage to the movement.

On a personal note, often when I am blogging about women’s watches, I do so with a slight sense of mechanical inferiority, especially if the watch in question is an outrageously priced piece with a quartz movement inside of it. Discussing the Jaeger-LeCoultre Rendez-Vous Ivy Minute Repeater renders the opposite feeling. The high mechanical complexity of the Calibre 942A is not merely an adaption of a movement found in more popular men’s watches, but a new and innovative design focusing on the desires of women, without a shred of an assumption that women do not really care for mechanical complications. In Jaeger-LeCoultre’s vision, a women’s watch can be dripping with diamonds and be crafted with ground breaking mechanical complexity. 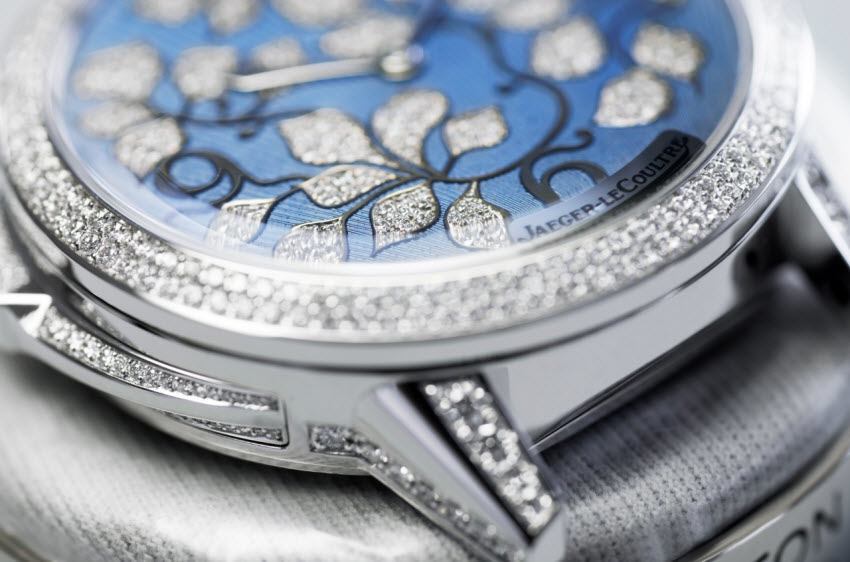 Of course, the dripping-with-diamonds aspect is quite an attraction too, made all the more desirable by its clever construction. But even diamonds haphazardly scattered across case and dial can be a bit of a turn-off. Jaeger-LeCoultre focuses on all aspects of watchmaking, utilizing experts specifically trained to perfect a craftsman’s unique talent. The creation of the delicate guilloché sunburst pattern upon the dial, for example, requires a highly skilled engraver with a steady hand and keen eye. The enameler must have intricate knowledge of smelting grit and adding the necessary minerals – in this case, metal oxides – to provide the base for the desired hue of blue, brushing the enamel, and then firing it for the perfect amount of time at optimal temperature, to create the exact blue reminiscent of the night sky.

The gem setter’s task is no less daunting. Selecting diamonds of the highest quality in color, cut, and clarity, we may say that the gem setter is to depict the first frost fallen on the ivy leaves. 255 diamonds of varying sizes are placed in perfect companionship on the ivy leaves, the tendrils of which form the 3,6,9, and 12 ‘o’clock. Surrounding the image with striking grace are two rows of diamonds on the bezel. In total, the timepiece is decorated with a total of 548 diamonds, including diamond encrusted lugs, crown, and pusher, firmly placing this timepiece within the realms of haute horlogerie and haute joaillerie – fine watchmaking and fine jewelry – alike. 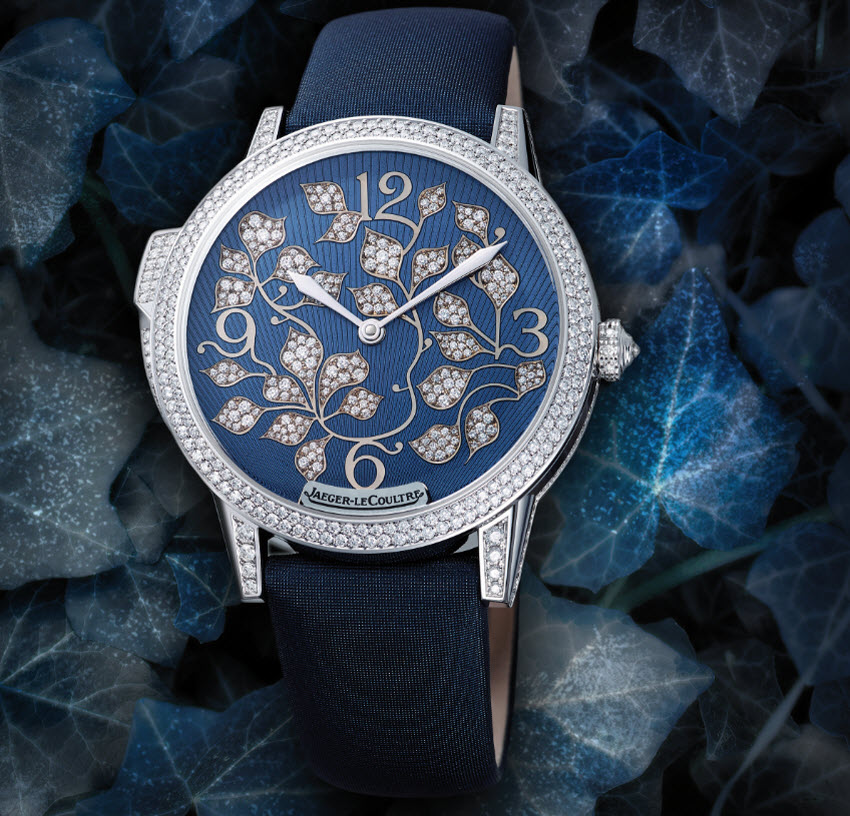 Of course, a watch exhibiting so many exceptional aspects requires a large range of expertise. The Jaeger-LeCoultre manufacture has no fewer than 180 different skills within its walls, enabling a high standard of craftsmanship, maintaining the tradition of Jaeger-LeCoultre – allowing the brand to flex its muscles every now and then with new movements and beautiful diamond settings, just as we have seen in the case of this piece.

The watch is presented on a matching blue satin strap, accentuating the dial colors. The Jaeger-LeCoultre Rendez-Vouz Ivy Minute Repeater is my ideal women’s watch: cutting-edge complications, stunning elegance, and quite a moody motif (think biting cold wind beneath a moonless night-blue sky blowing without compassion on snow dusted ivy leaves). It is a timepiece that has it all. The Jaeger-LeCoultre Rendez-Vous Ivy Minute Repeater will be limited to 88 pieces – a relateively large number for such a highly complicated and arguably niche offering – with the price coming in at around $260,000. jaeger-lecoultre.com