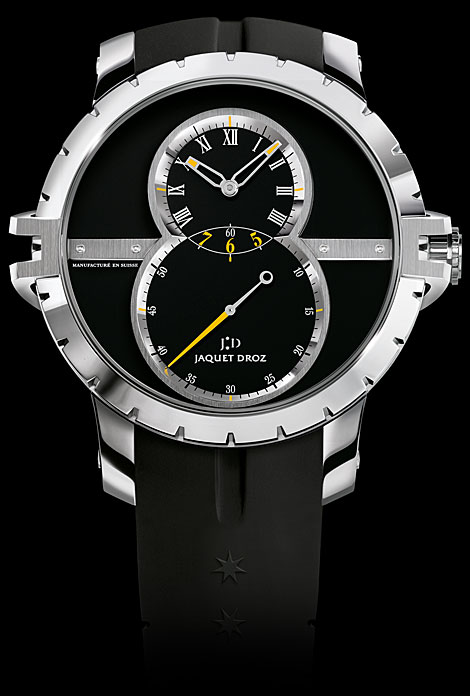 Jaquet Droz is another luxury Swatch Group watch brand. I’ve always seems them a cousin of Breguet (in terms of style), which is also a Swatch Group brand. The majority of their watches are based on a “grand (grande) seconds” display with places emphasis on the seconds read out using an overlapping subsidiary dial which is larger than the dial used to display the hours and minutes. Most of their watches have been “artsy” or formal looking, but the SUW is something different, sort of.

Figuring that their traditional looks were sort of alienating the younger population of watch buyers, Jaquet Droz thought they would liven things up a big injecting a new and more rugged design into their traditional figure eight layout theme. The resulting watch looks really cool actually, but only looks rugged as my inclination is to say that you don’t want to go around beating up this watch. Inside is an automatic mechanical movement of course. 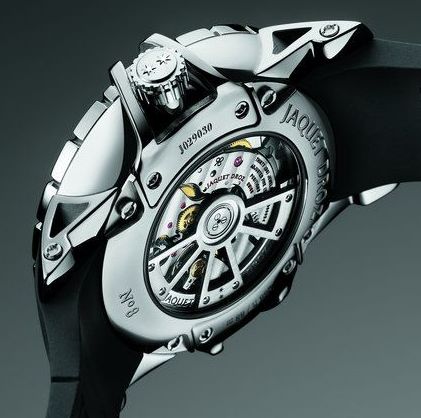 The new design is pretty handsome. The fluted bezel is “grasped” by a claw type of caliber. It is just for show, but looks nice abutting the internal steel strip with screws in it. The watch parts of the dial are recessed giving a great looking three dimensional appearance which enhances the visual power of the hands (and at the same time makes them more legible). Orange accenting is in response to an “in” color which hasn’t quite been beaten to death yet. The overall idea is to make this watch look as close to some high tech analog instrument panel as possible. Emphasis on the large seconds display probably adds a welcome degree of movement to the watch as the constantly moving part is always noticeable. And for those select few who are more concerned with the seconds elapsed each minute than the time, this watch is meant for you! Unfortunately, this otherwise handsome watch has had the ill treatment of yet another inept watch marketing or advertising employee. They selected to call this watch the “SUW.” Yes, that means “sport utility watch,” just like sport utility vehicle. Yea, you know what those are, and aren’t you excited to see your watch (which might cost almost as much as the car) named after it. So what is the added sport utility of this watch? There is none, it just looks cooler and more aggressive than most Jaquet Droz watches. Faux armor plating. Is SUW a name worth placing on a watch this expensive? Of course not, it is a retarded name only a simpleton would actually place on a watch. I mean, would you buy a car called the Toyota SUV? No, you wouldn’t. If you are like me, you are thinking to yourself, “what idiot let that name go to press?” Probably another watch marketing goon (no offense to the watch marketing goons that I know, its just that most of you know very little about watches and didn’t choose your assignments). The message I want to make to the Swatch Group, and other watch makers is to please focus on making nice watches, and leave naming the watches to someone that actually does a good job at it (of which there seems to be a desperate shortage).

Despite my tirade on watch naming practices I really like Jaquet Droz and the Grande Second SUW (I can barley write that with a straight face) a lot. These are handsome watches with a rich helping of avant garde style that still feels appropriate for any owner. Oh, and retail is about $15,000. Figure about $10,000 in stores.