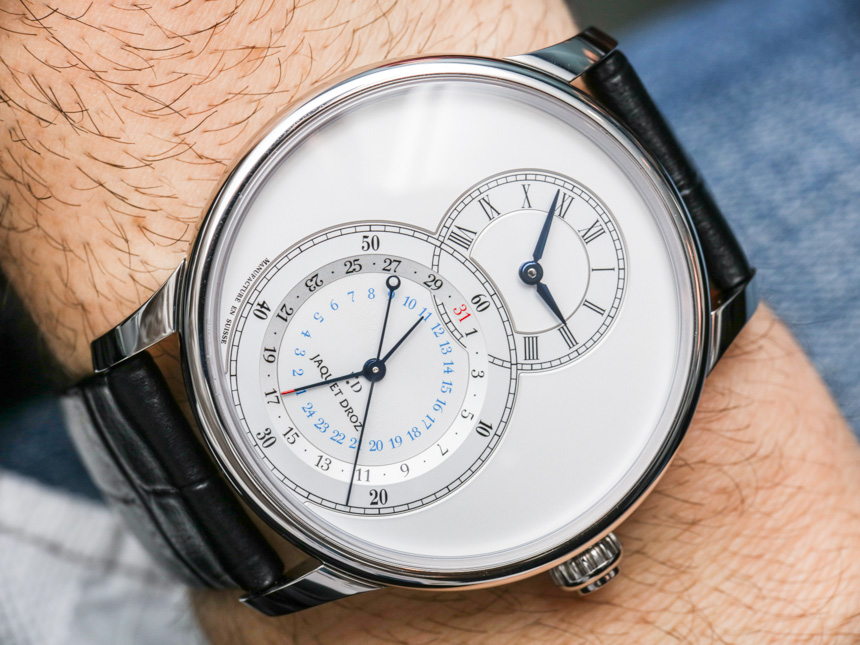 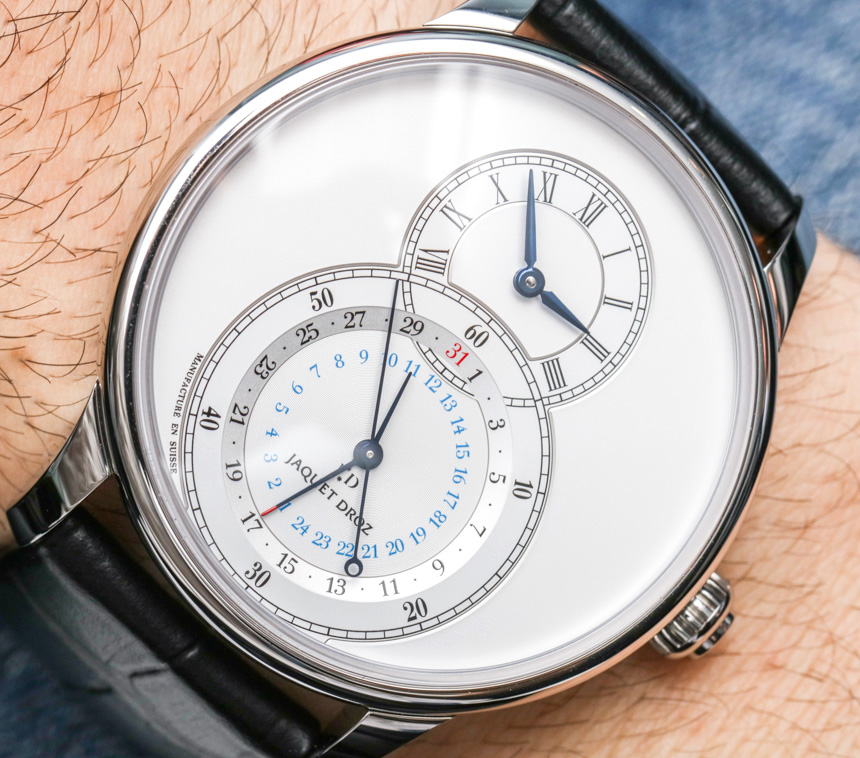 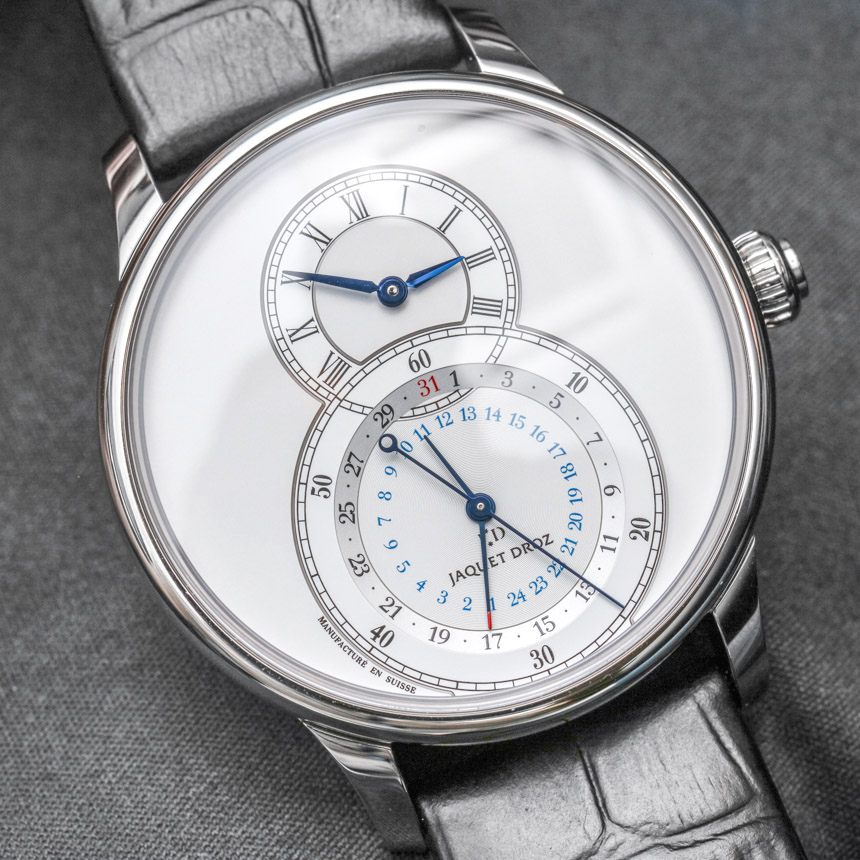 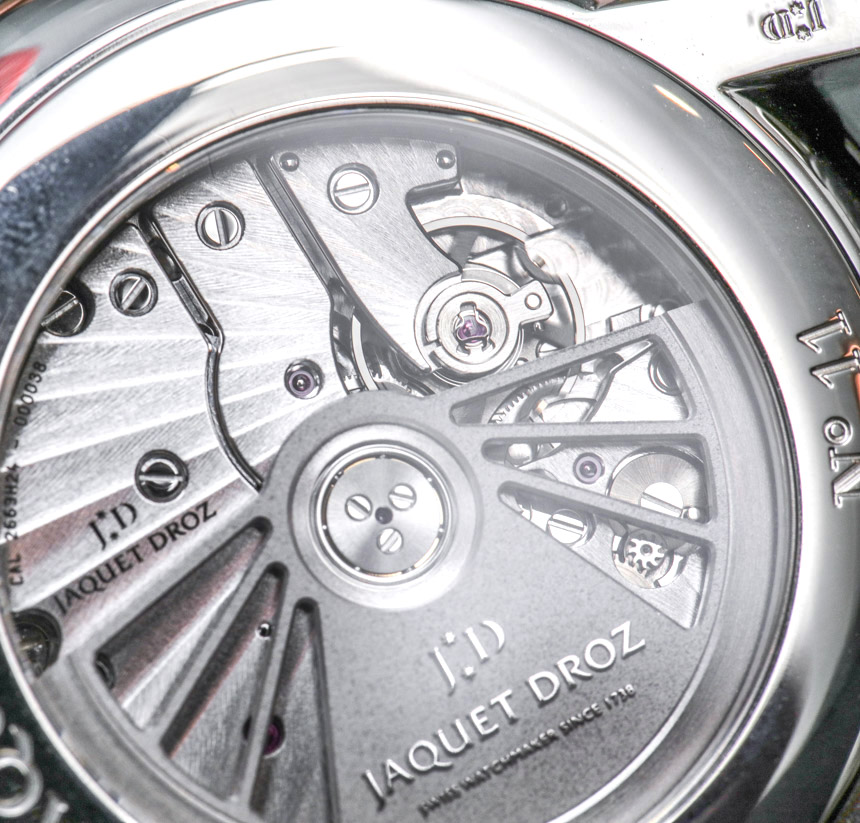 In 2014, Jaquet Droz introduced a new exclusive base movement developed for them by partners in the Swatch Group. This new base movement was not only more attractive and of a higher quality than previous movements used in the Grande Seconde family but, as far as I can tell, also serves as a base upon which to add various complications. Thus, you have the Jaquet Droz Grande Seconde Dual Time which has the time along with the date and a GMT hand. 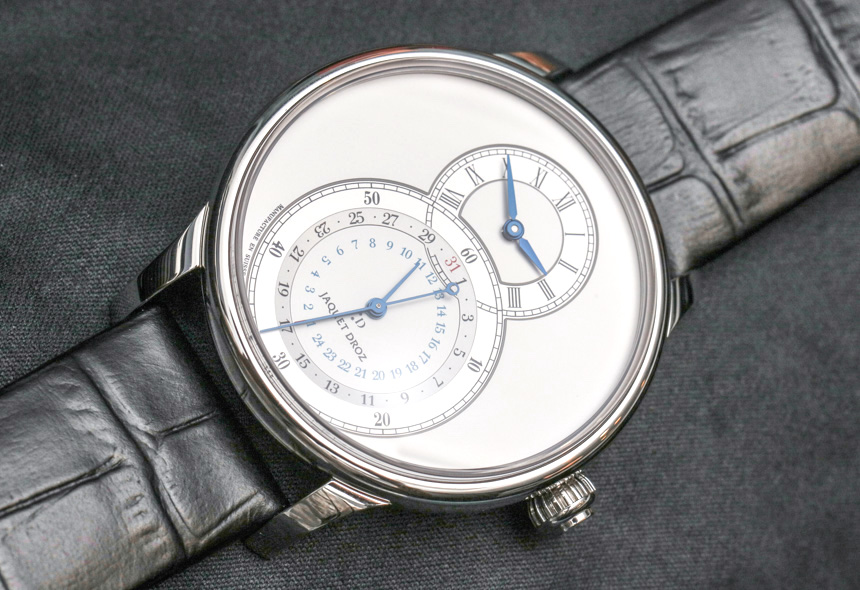 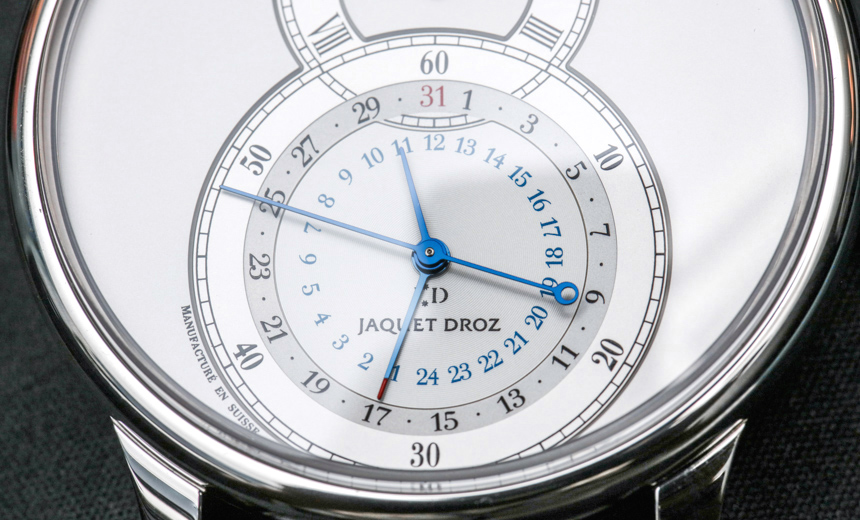 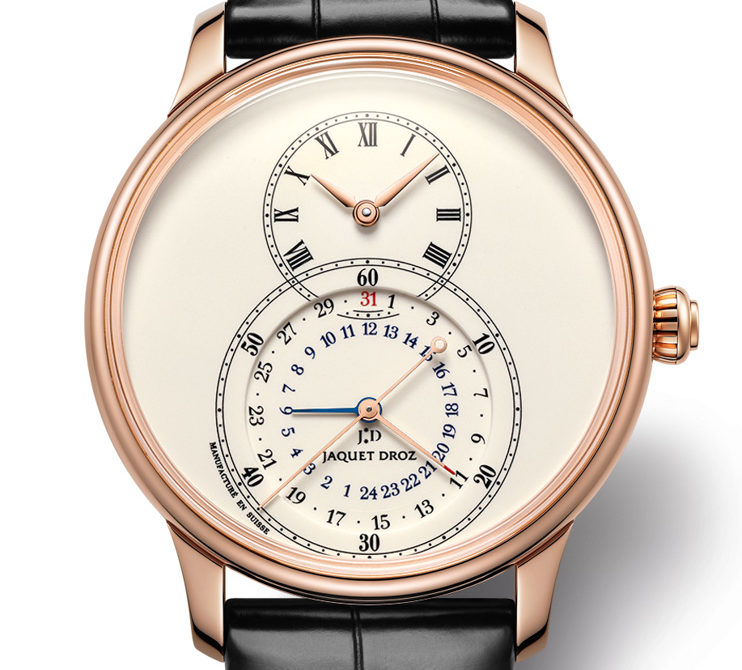 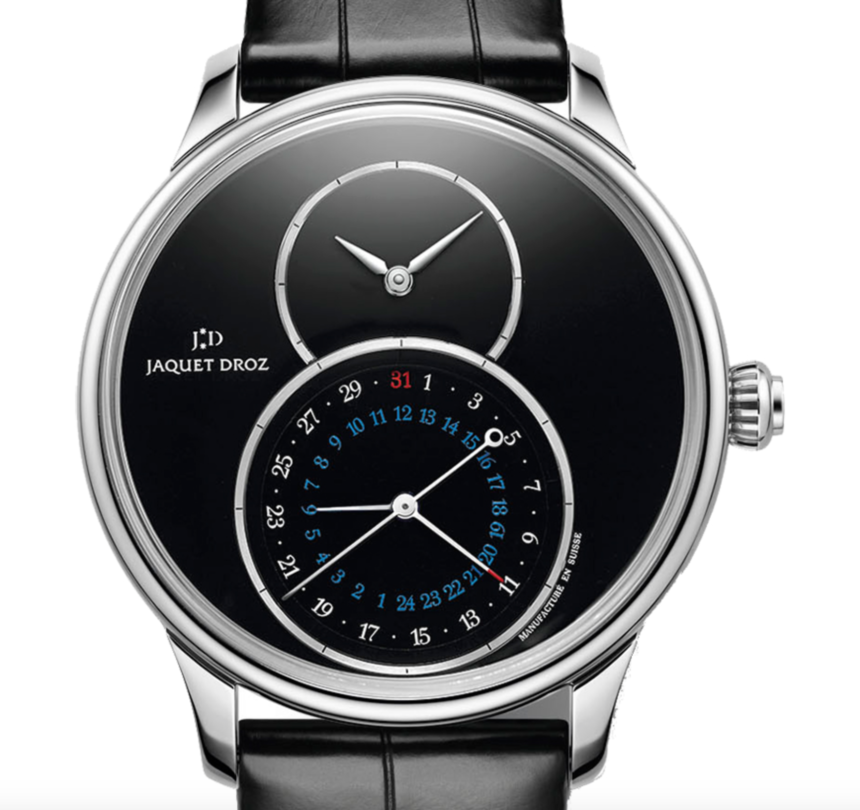 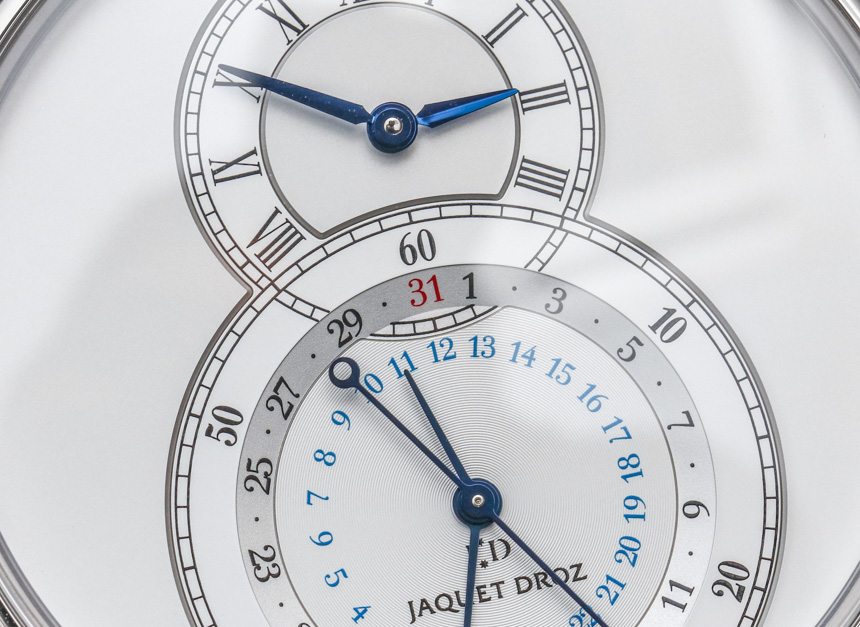 The good news is that we now have a very elegant travel watch; the less good news is that the GMT indicator hand isn’t super easy to read. The lower subdial now has three hands, and the least easy to read is the GMT hand. Even the date indicator hand has a red tip and a bigger scale. As a GMT watch which is primarily used to know the local time and occasionally used to to reference a second timezone, the Jaquet Droz Grande Seconde Dual Time works fine, but I am not sure how comfortable the watch is when it comes to needing to know two time zones easily. With that said, beauty has value right? 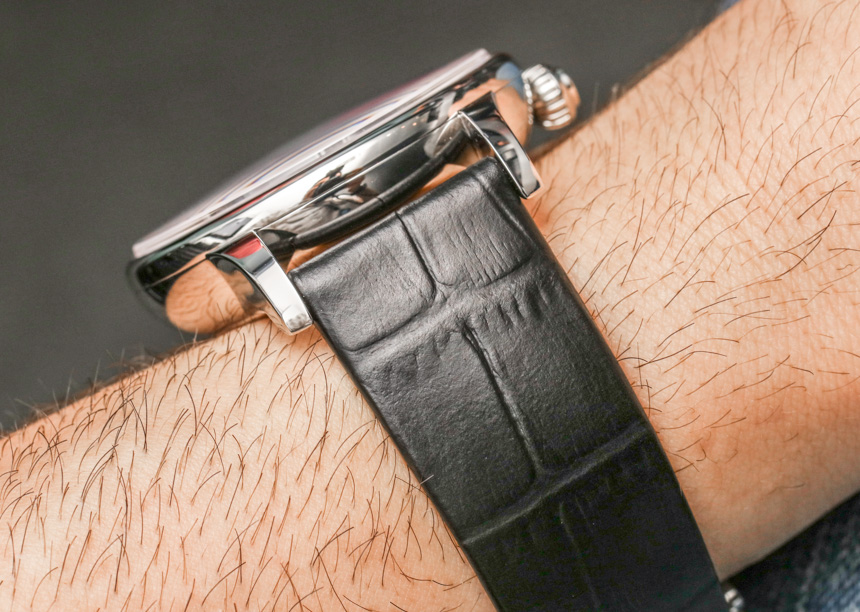 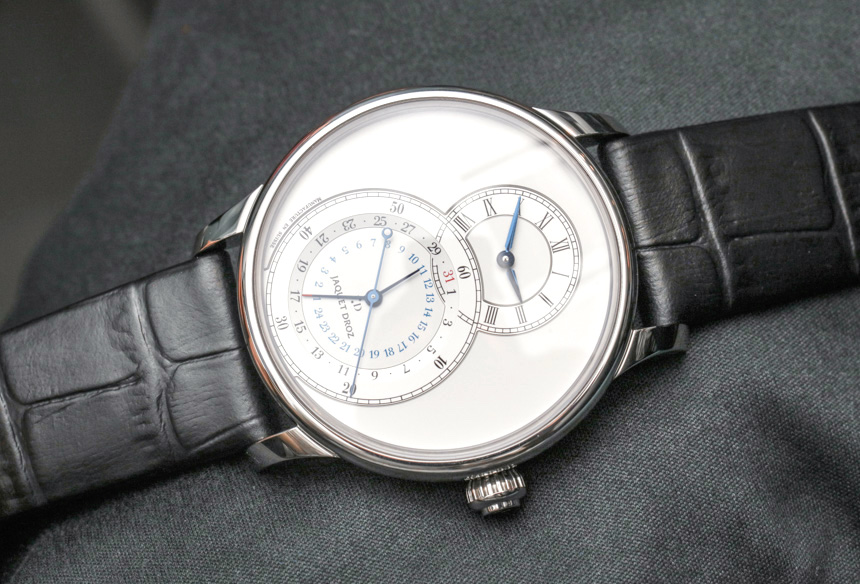 The Jaquet Droz Grande Seconde Dual Time watches are 43mm wide in a larger, yet comfortable case that is all about making a visual statement, even if that statement is an elegant one. The case is further 13.13mm thick but only water-resistant to 30 meters. It does feel as though the case could easily be 50-100 meters water-resistant with minimal changes. Jaquet Droz is always good about complementing the attractively curvaceous case with a fantastic “rolled-edge” alligator strap. I love these because they hide all stitching on the back of the strap which, in my opinion, makes for a superior look. 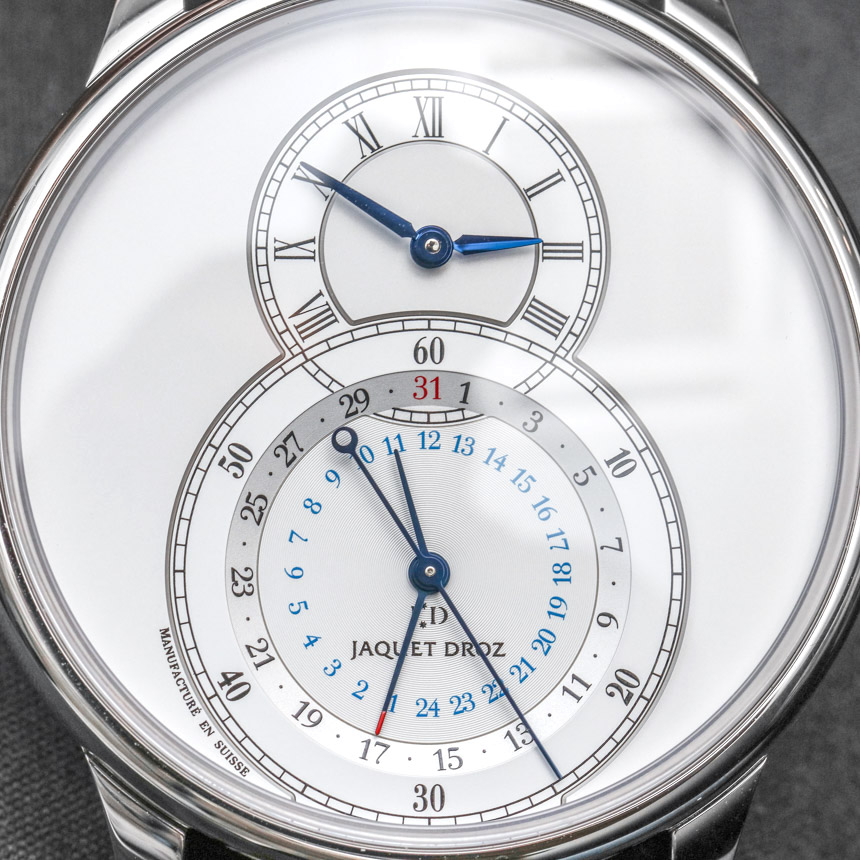 The 18k red gold version of the Jaquet Droz Grande Seconde Dual Time benefits from an ivory-colored grand feu enamel dial – which looks beautiful. The black-dialed steel model has a solid onyx dial – which is gorgeous, but can have legibility issues depending on the light. Probably the most practical model is the steel with silver opaline dial which has a good level of contrast and finishes making for a very legible dial. 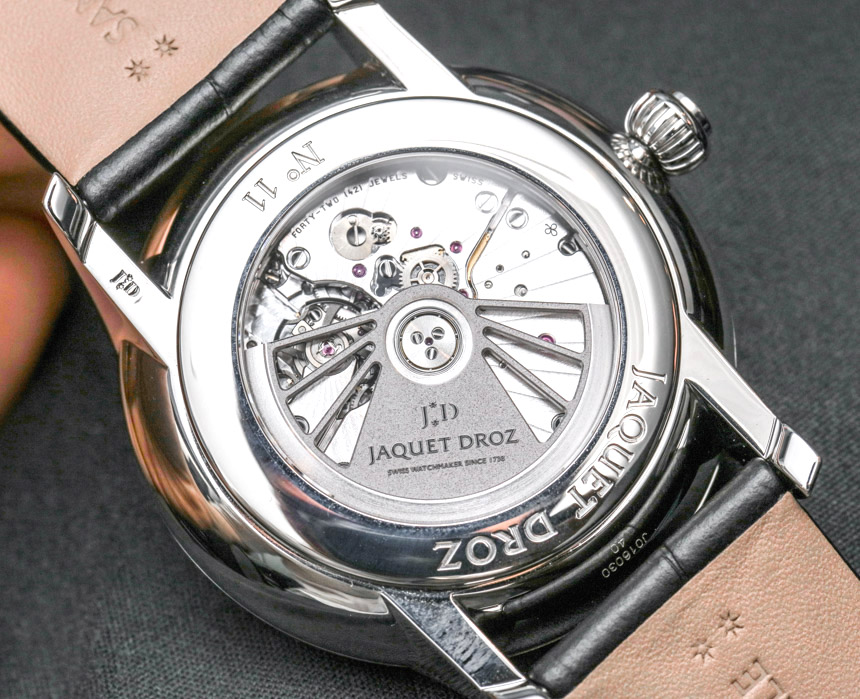 Viewable through the sapphire crystal caseback window is the exclusive Jaquet Droz caliber 2663H24 automatic movement with a solid gold rotor. It’s a fine and fitting movement for this application given its technology and attractive decoration. Operating at 4Hz (28,800bph), the movement has a power reserve of 65 hours across two mainspring barrels and further includes silicon parts such as the balance spring and escapement. 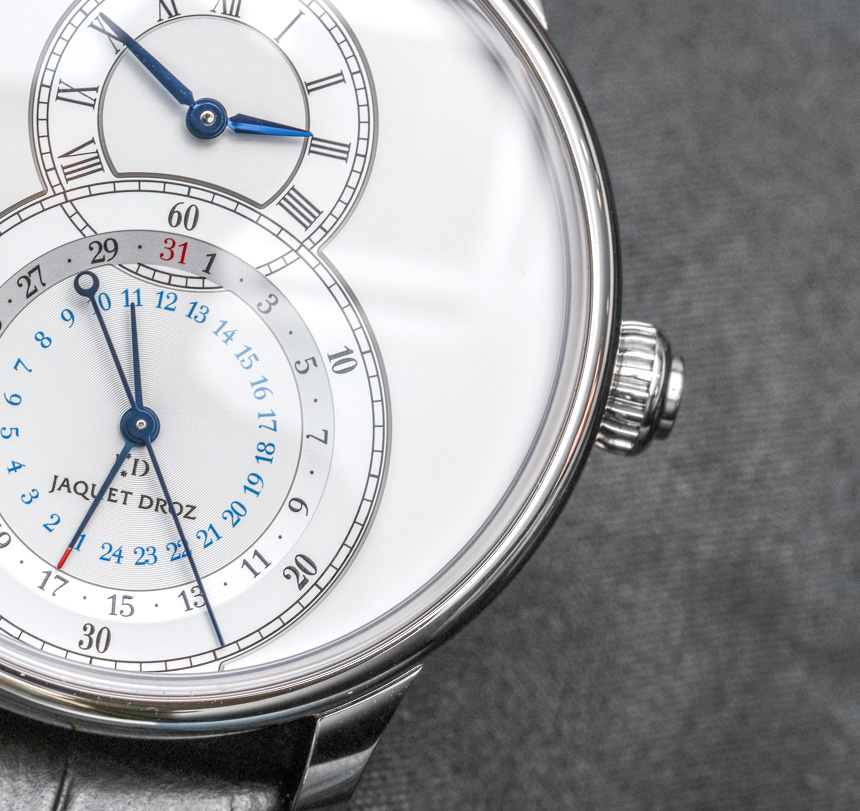