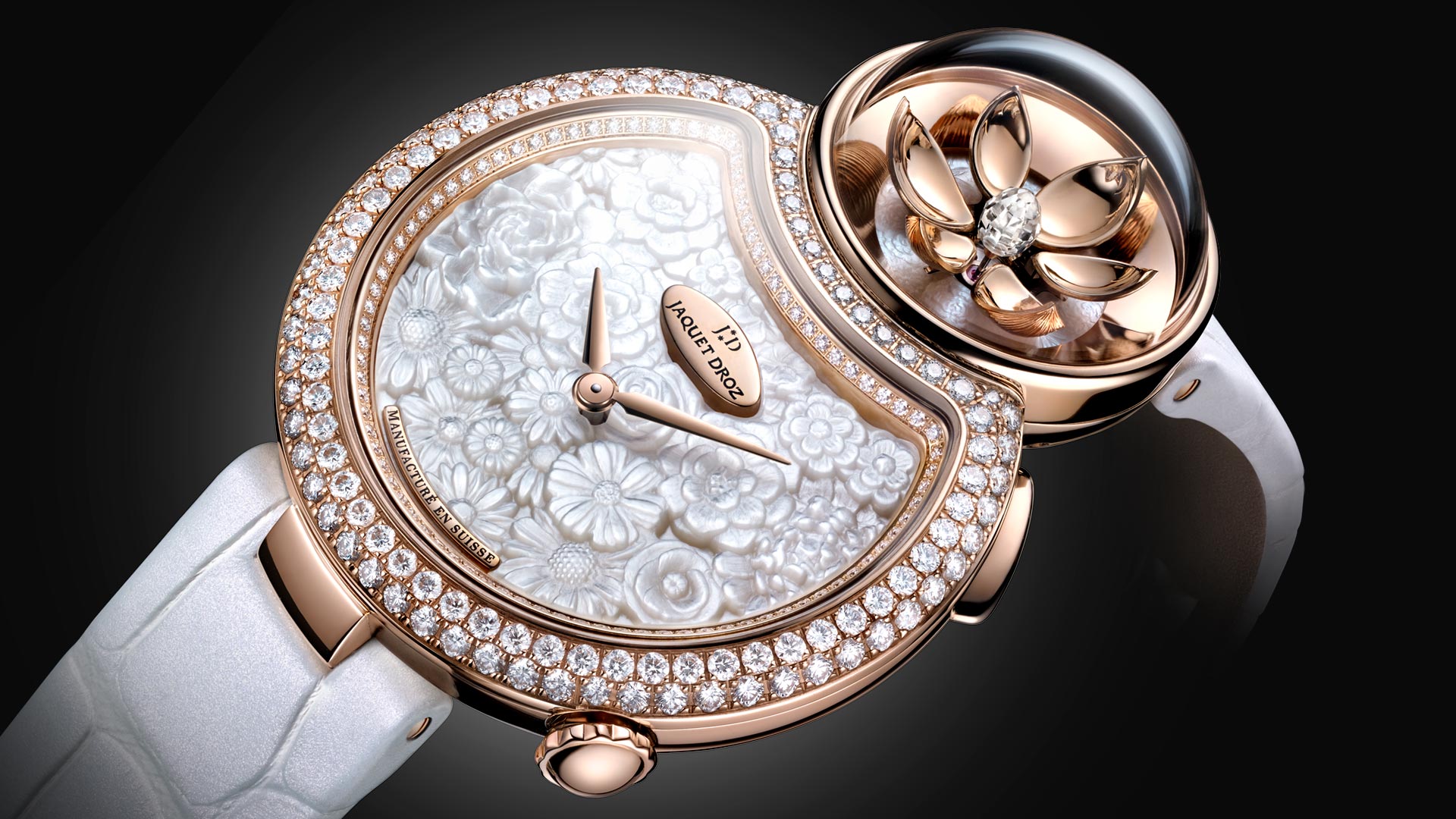 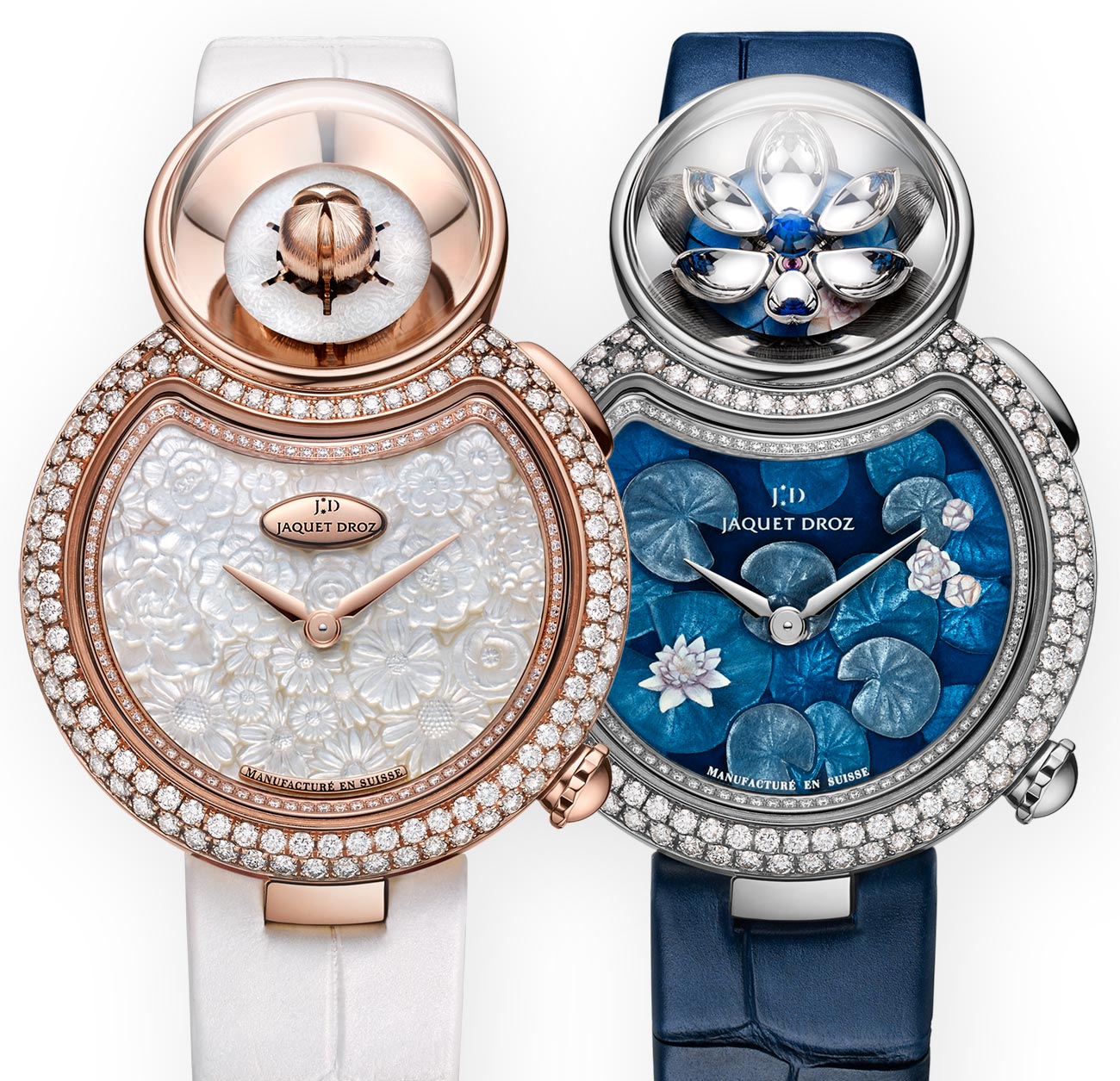 Swiss Jaquet Droz applies its unusual area of specialty – automatons, which it has been making since the eighteenth century – to the Lady 8 Flower line. The Jaquet Droz Lady 8 Flower is the first ladies’ collection from the brand to contain an automaton. The mechanism powers the petals of a three-dimensional lotus flower, causing them to open and close on demand. When open, the flower reveals a pistil composed of a 0.25-carat briolette diamond or a briolette sapphire. 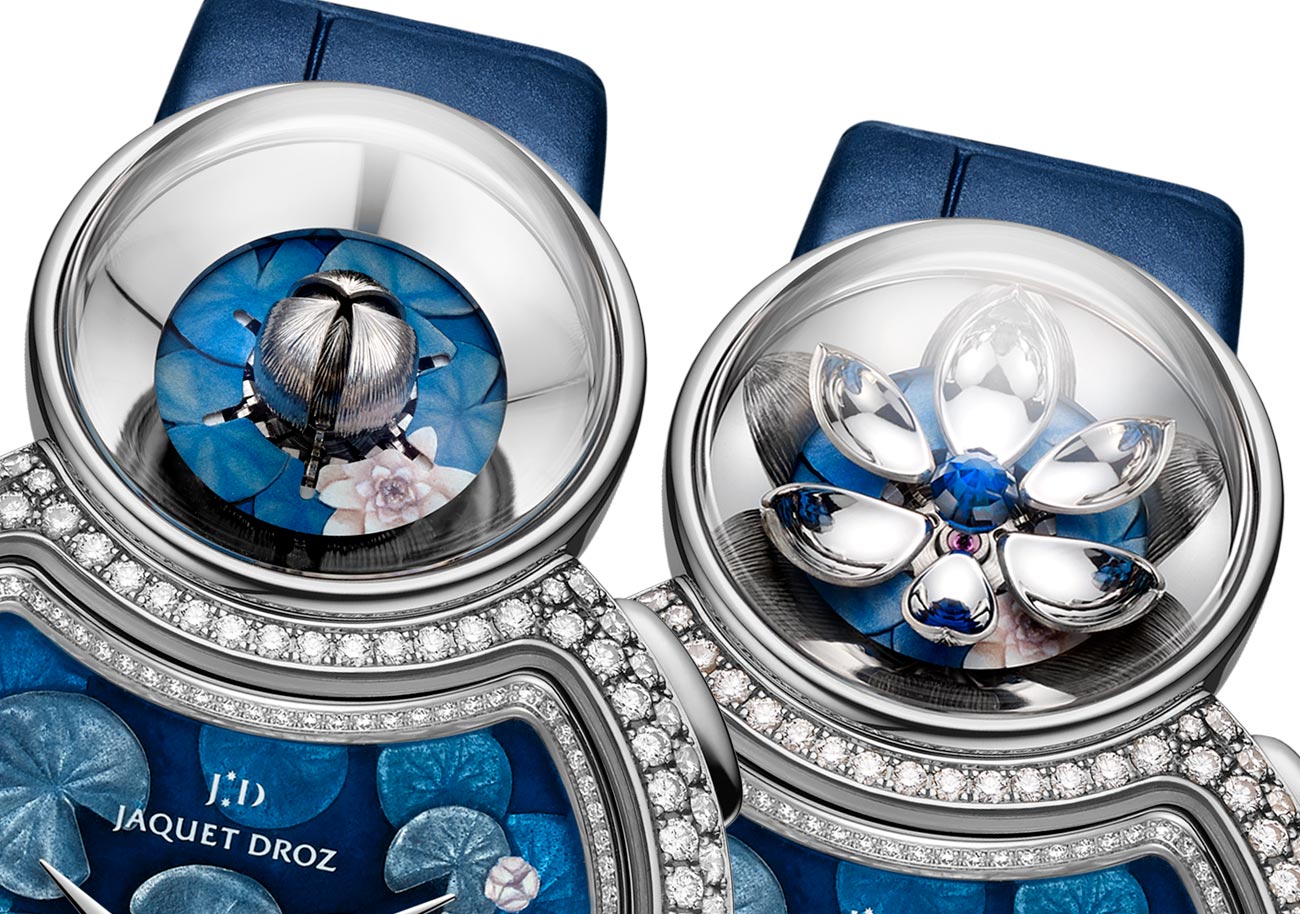 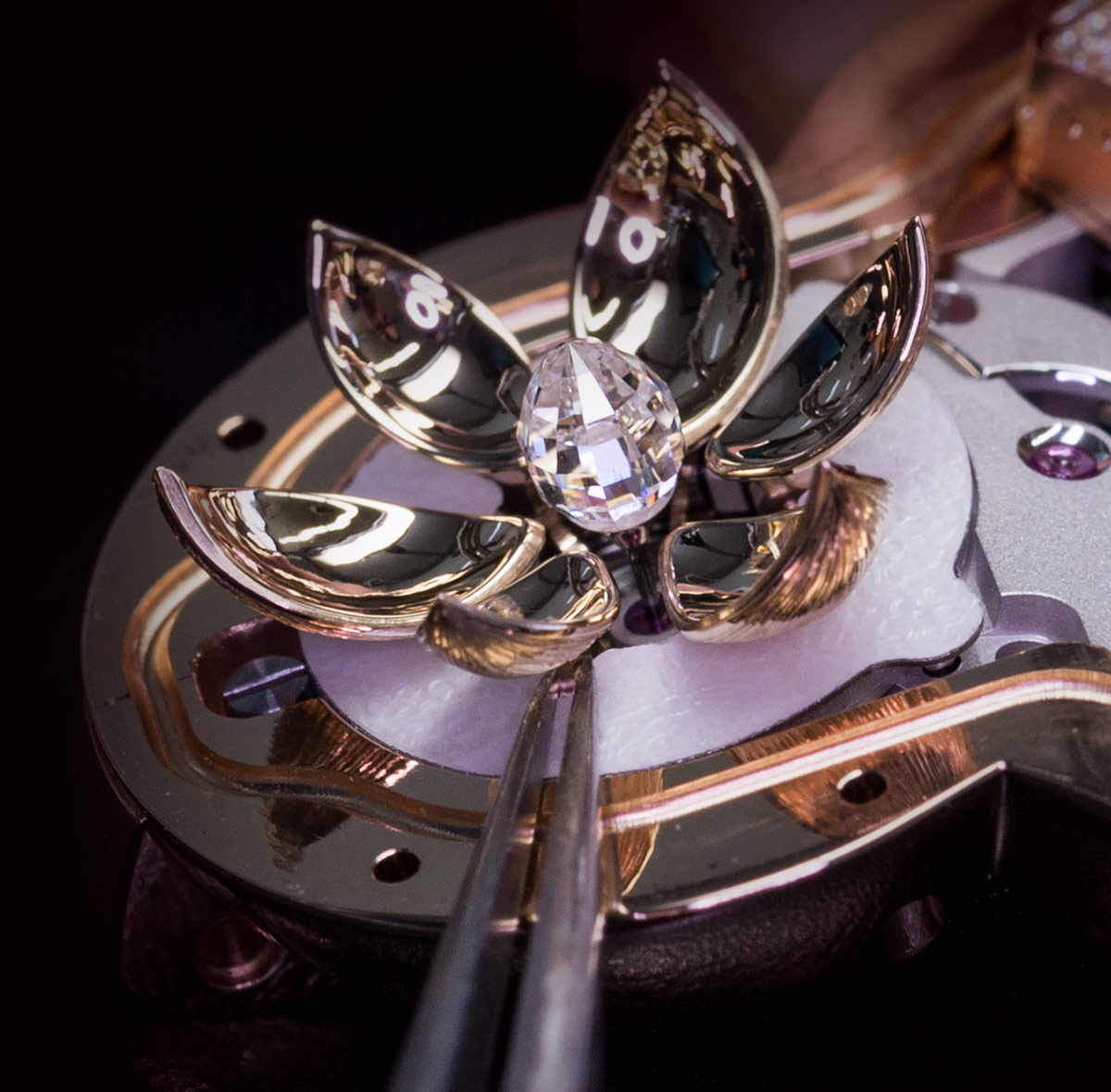 The watch is ultra-feminine in a couple of ways: the pistil is the female reproductive part of a flower and the watch itself demonstrates an element of creative abandon that you don’t often see in a men’s timepiece. If a men’s high-complication is over-decorated, it can detract from its ability to retain value, but in a ladies’ timepiece, the more decorative and unique, the better. Animated watches – ladies’ mechanical watches that move in some way, either by vibrating, rotating, flying, or blooming – emerged as a trend in 2015, with Jaquet Droz leading the charge. That was the year it introduced the first Lady 8, with a butterfly themed main dial below the automated flower. 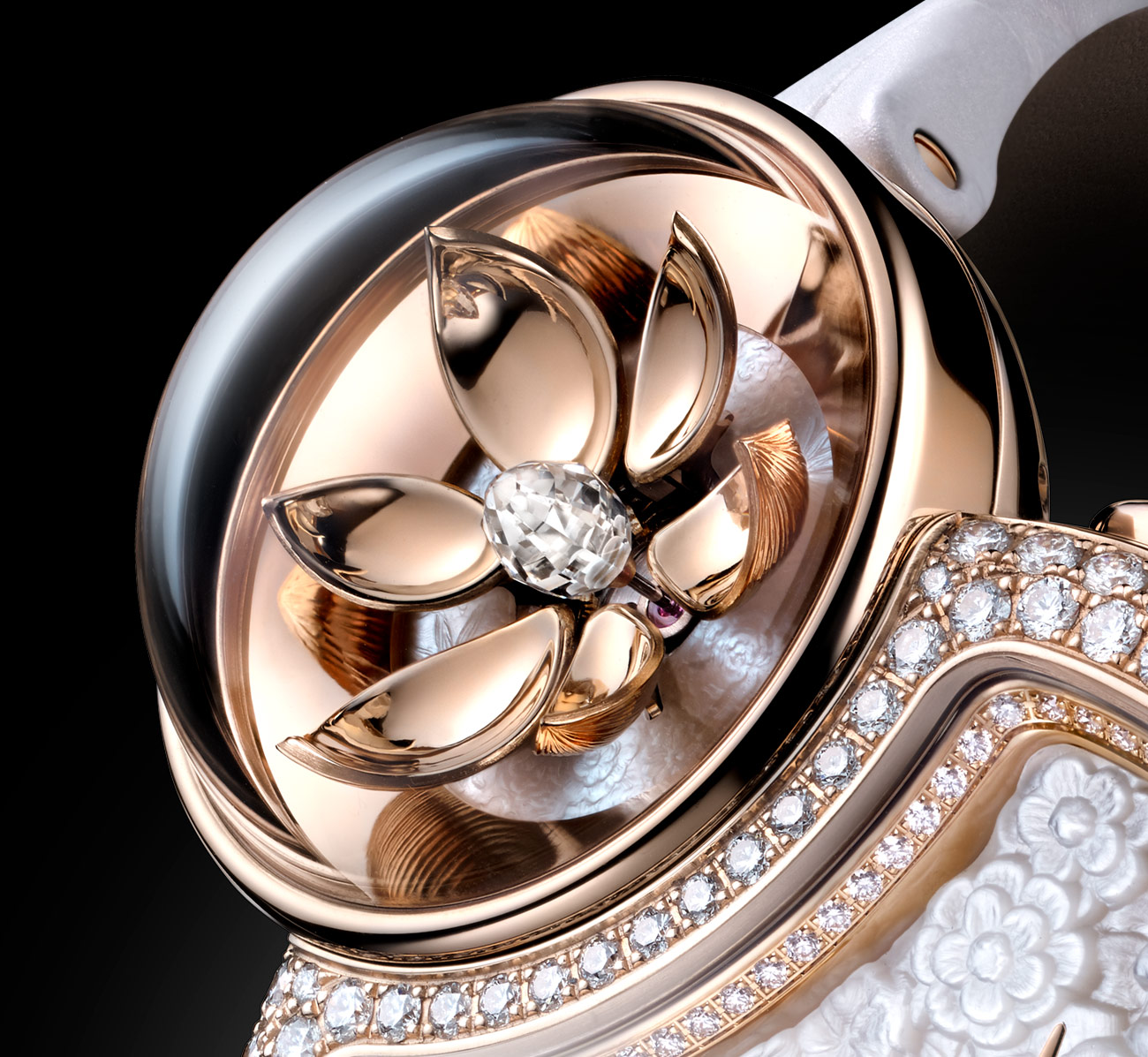 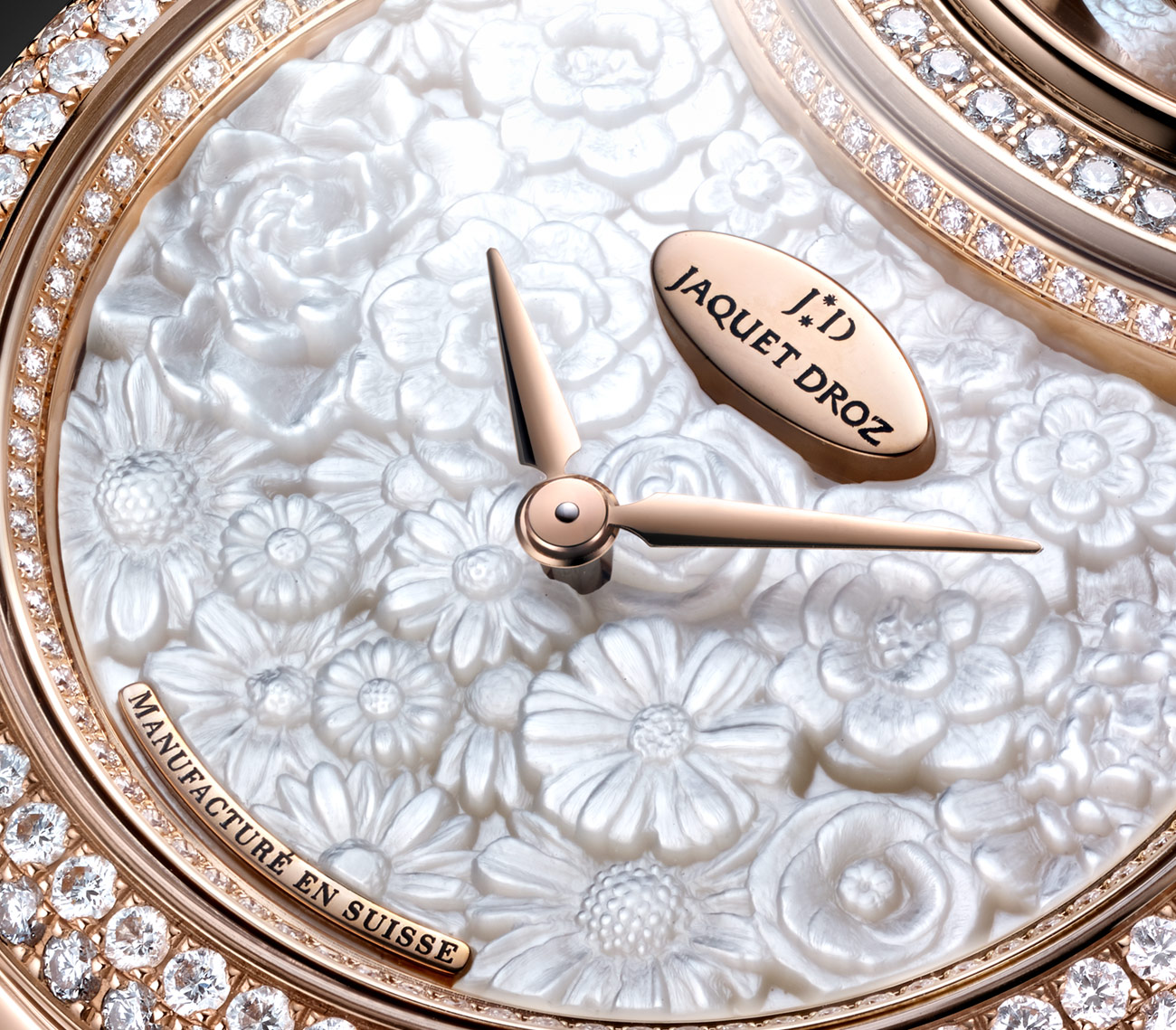 The Lady 8 is so-named because it is designed in Jaquet’s signature figure 8 shape, with a small circular case stacked on top of a larger 35mm one. The small dial, containing the floral automaton, hovers above and overlaps the main dial. The concept was first introduced with a similar floral automaton in the top case with a butterfly themed dial below – and more Jaquet Droz Lady 8 watches can be seen hands-on here. The animated flower, under a domed crystal on the upper dial, blooms on command to reveal a briolette-cut diamond or sapphire. The main dials of the two new pieces (one in 18k white gold and the other in 18k red gold) are decorated in two different patterns. 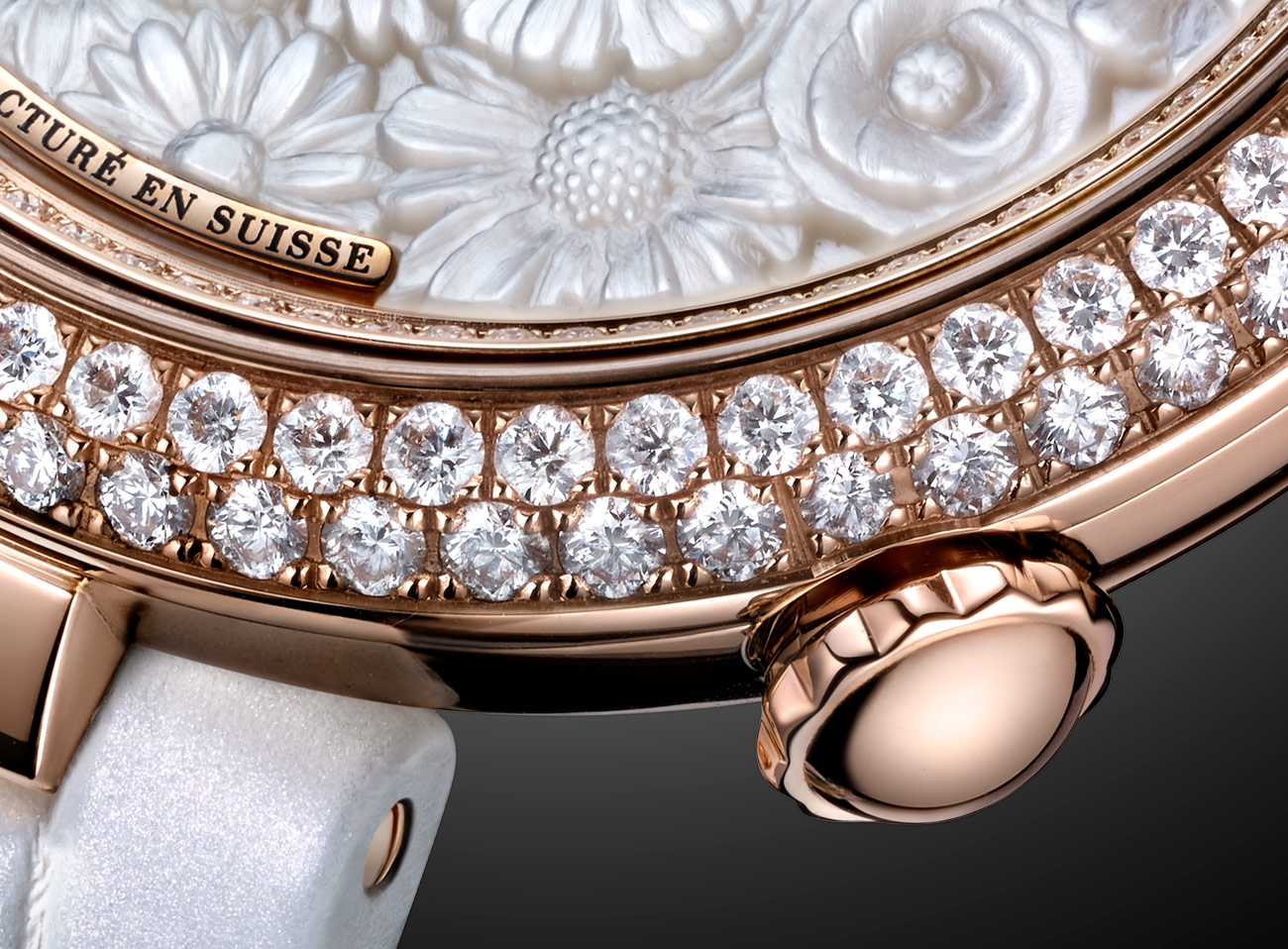 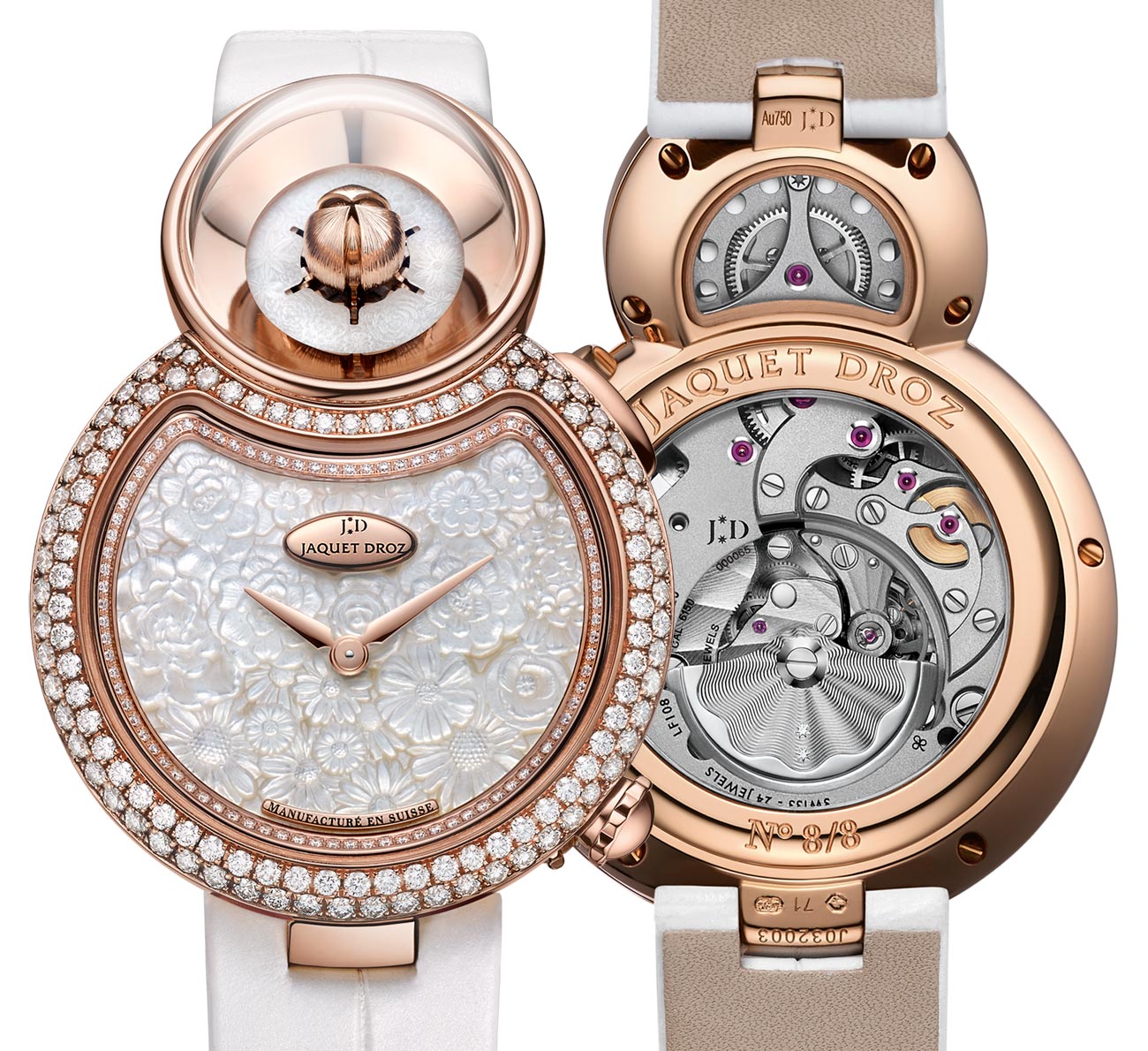 The dial of the white gold version depicts lotus flowers resting on the water, rendered in deep shades of intense blue using grand feu enamel, which is fired at high temperatures several times for an extremely glossy finish. The dial on the red gold version is carved out of mother-of-pearl in a sculptural depiction of a bouquet of flowers. Each model is set with a total of 249 diamonds on the bezel, rehaut, and buckle. The Jaquet Droz Lady 8 Flower watch is powered by the Jaquet Droz 615 automatic movement with a platinum rotor and 38 hours of power reserve and features a silicone balance spring and pallet horns. 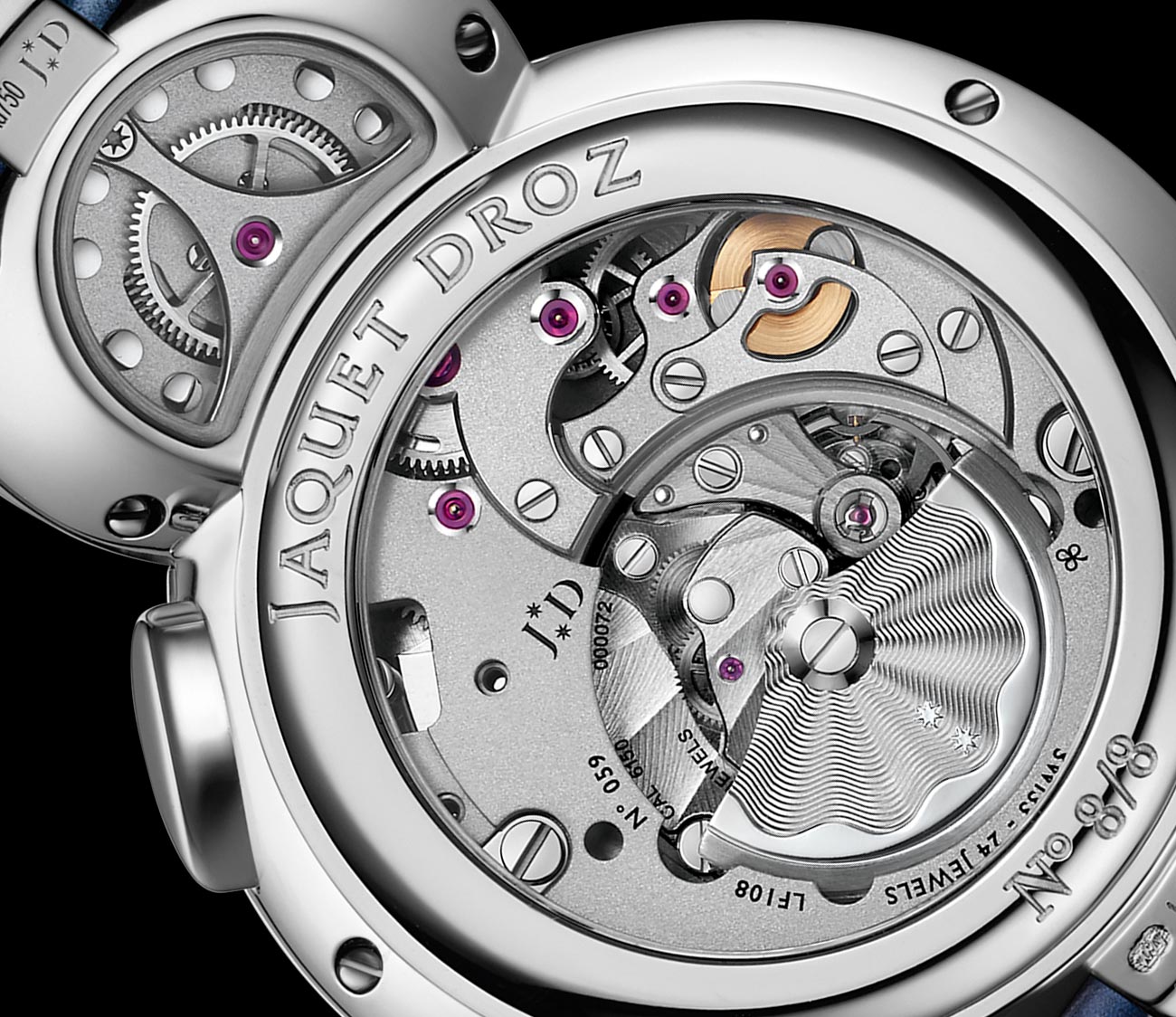 The automaton on the top dial is activated by a low-profile pusher at 2 o’clock on the case side. Not only do the petals open, but the gemstone pistil swivels back and forth. The briolette cut makes it sparkle like a disco ball as it turns. The show lasts eight seconds – Jaquet Droz likes the number eight, a symbol of perfection and harmony. The Lotus is chosen as a spiritual symbol that represents beauty and the cycles of life. It is a limited edition of eight pieces, and both models retail for $173,500. jaquet-droz.com