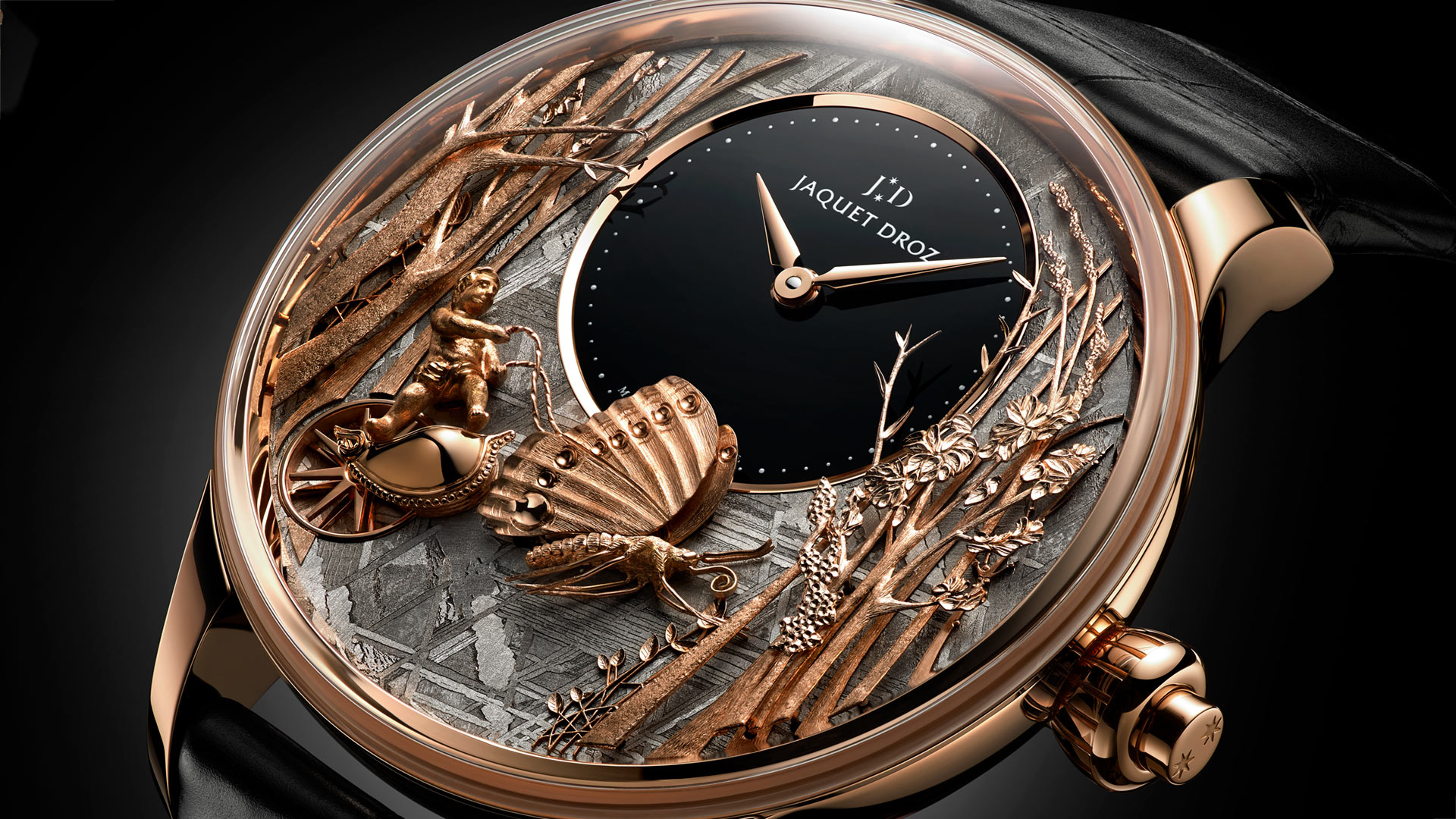 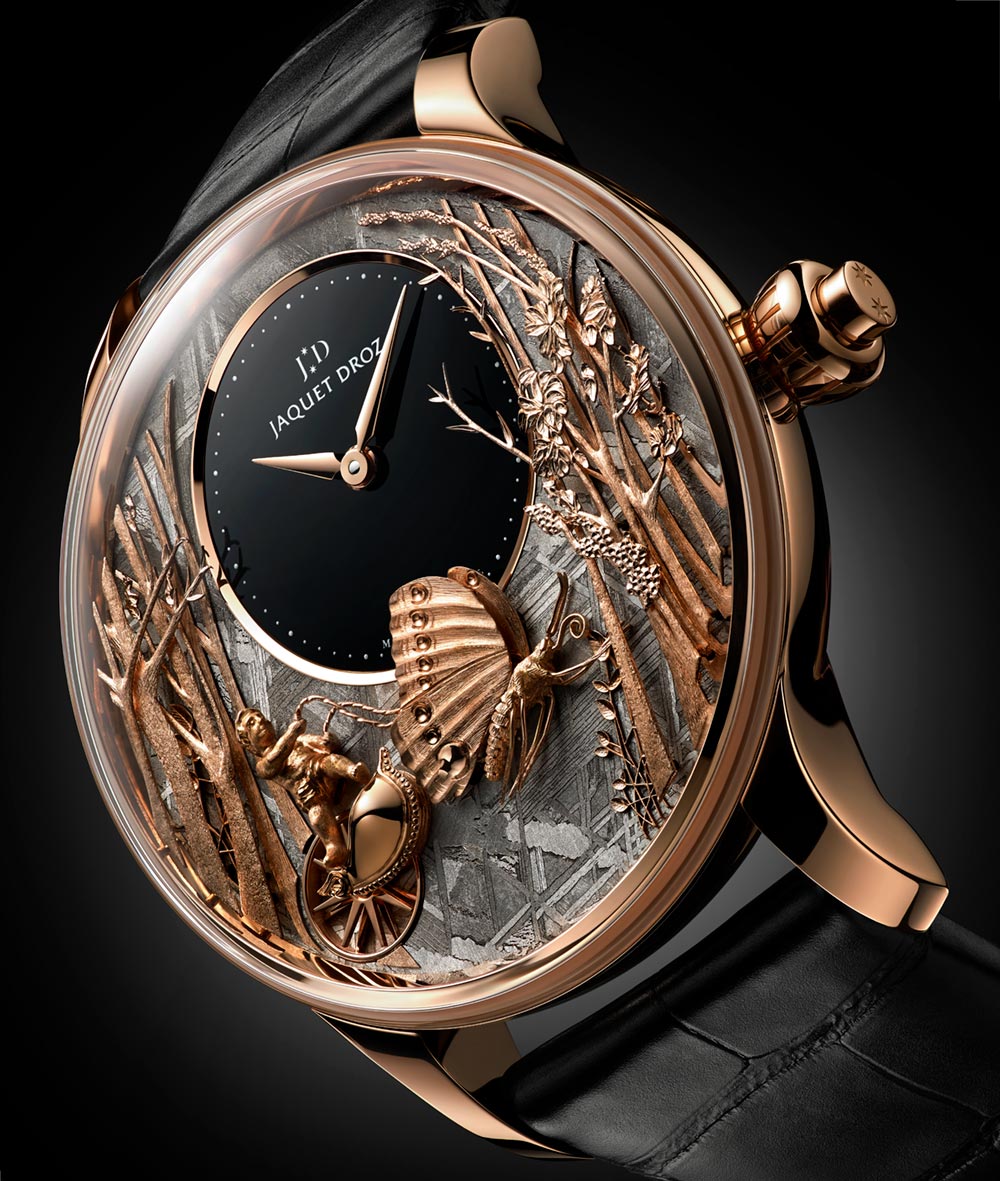 When asked about my passion for watches, and why it’s there, I often fall back to a simple answer – because they are tiny, purpose-built machines that tirelessly work away, year after year, doing one job, and doing it well. That speaks to the engineer and techie in me, of course. Then you have watches that are more artistic in nature, and those resonate with the other side of my brain. Then you have something like the Jaquet Droz Loving Butterfly Automaton that takes both sides of the brain and makes a whole that is greater than its parts. 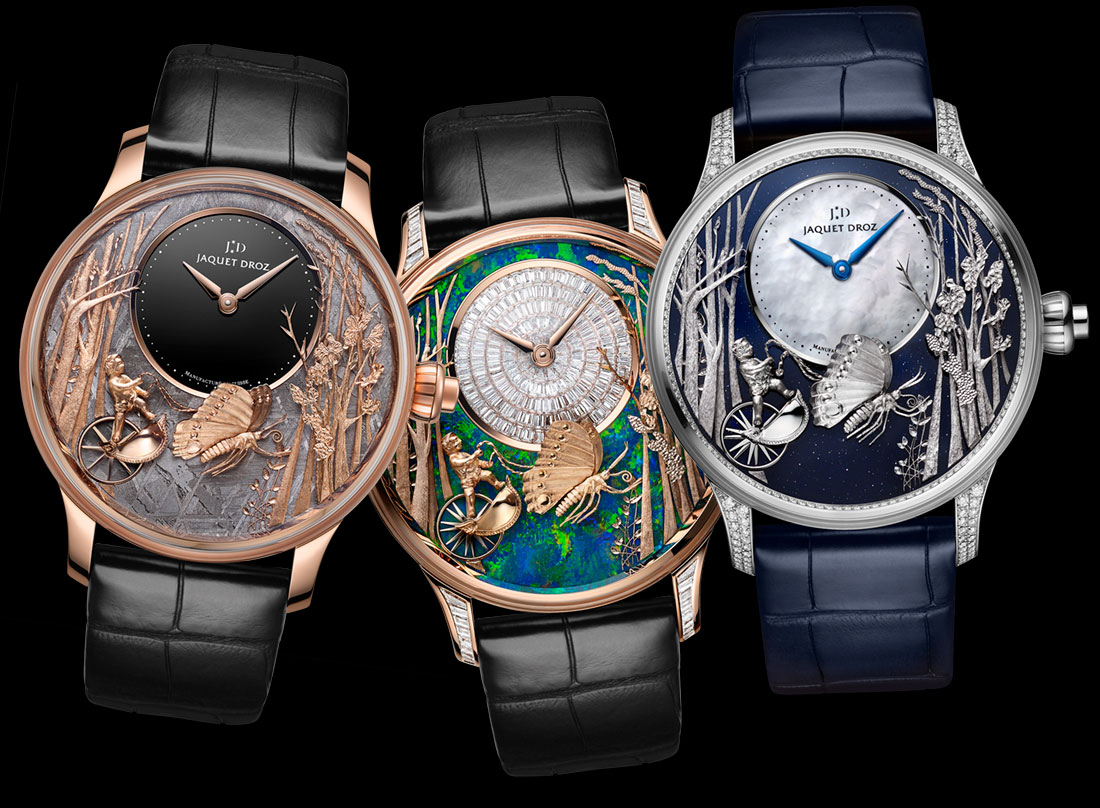 Of course, Jacquet Droz is no stranger to kinetic mechanical sculpture (for that is what an automaton is, after all). The brand has been doing amazing things for 280 years now, with one of the earliest being an automaton, designed and built by Henri-Louis Jaquet-Droz, that drew sketches or wrote letters as we saw here. One of the pre-programmed sketches the automaton drew was that of a butterfly, and that is what is referenced here on the Jaquet Droz Loving Butterfly Automaton. This watch design first arrived in 2017, and this year, we’ve got three new versions with variations in materials and coloration. 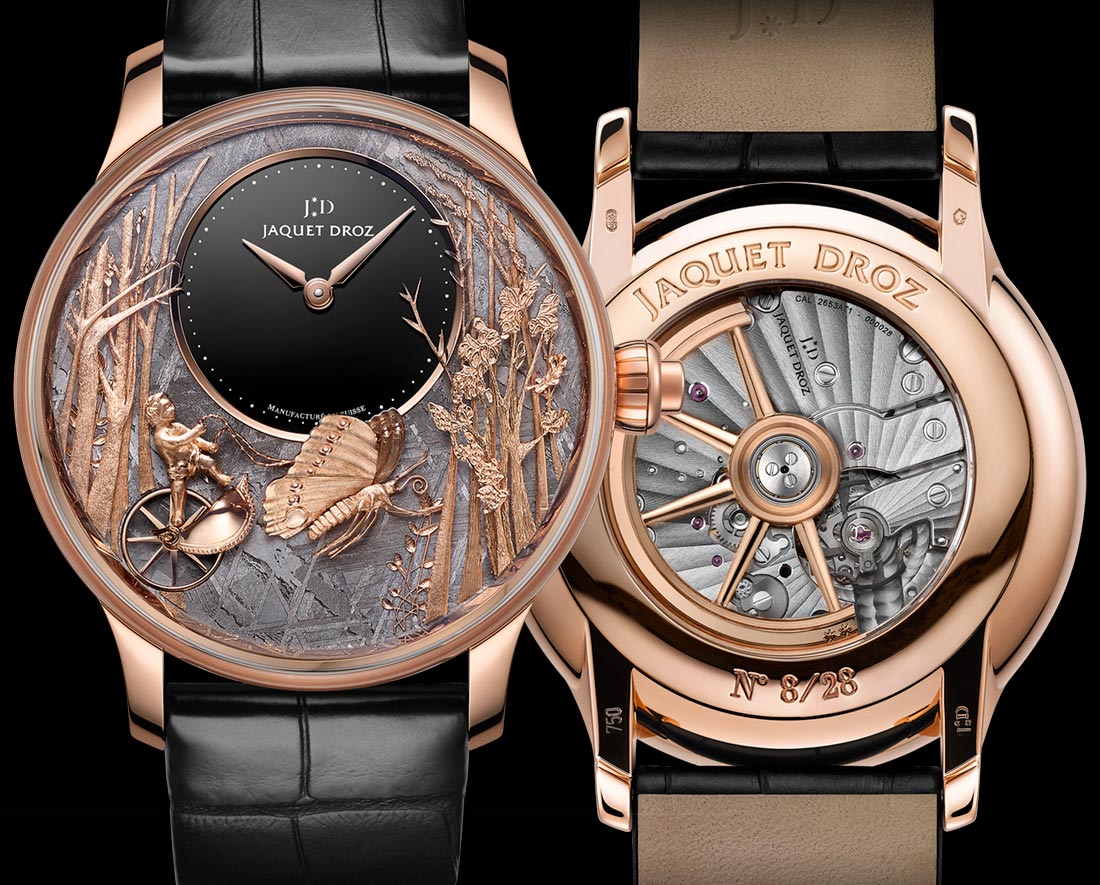 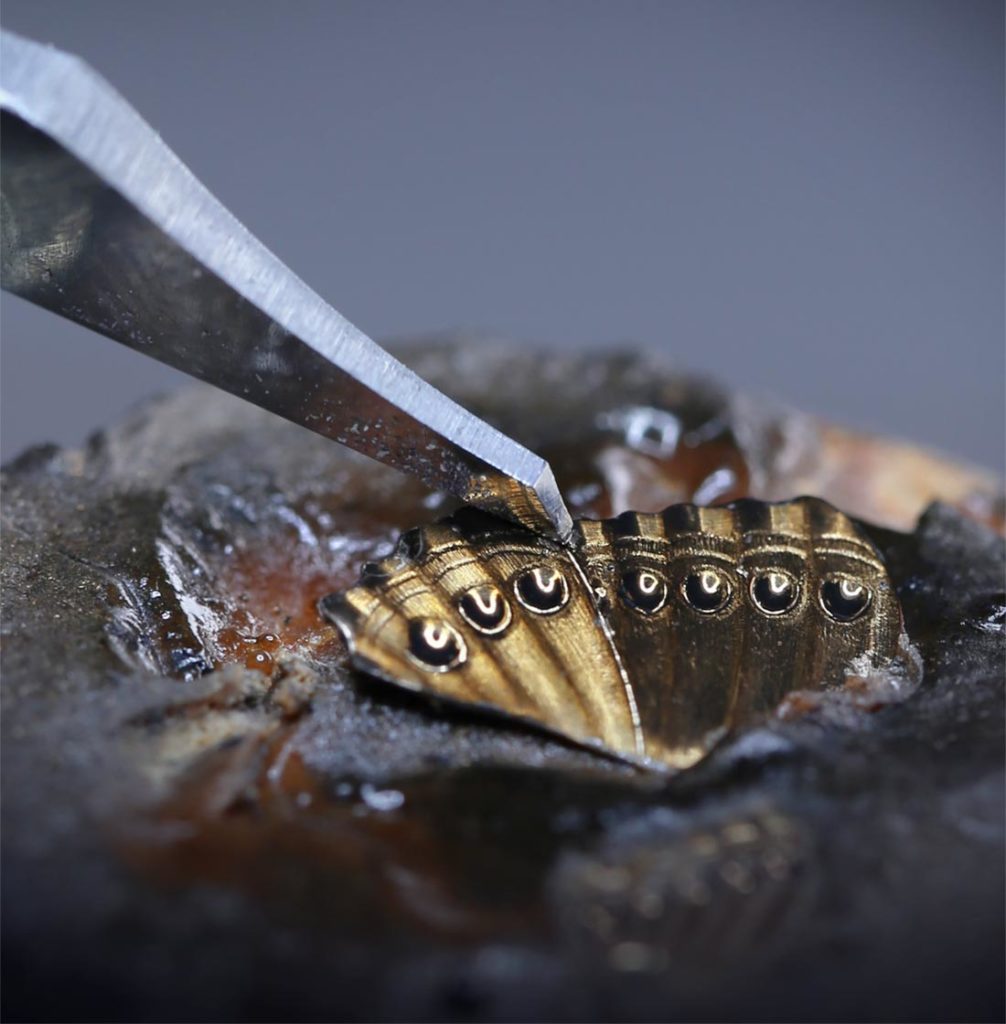 Before we get into that, though, I want to spend some time on the artistry that went into this watch. All of those happy little trees? Handmade from gold, the 2mm creations required special tools – and no doubt, a deft touch. These serve as a backdrop to bridge the gap from the dial (more on that in a moment) to the focal point of the Jaquet Droz Loving Butterfly Automaton, the butterfly and its driver. Yes, that’s right – you’ve got a small cherub in a carriage being pulled along by the butterfly, all carved with amazing detail (definitely bring a loupe if you get to see one of these). If that weren’t enough, the butterfly can flap its wings, all while the wheels on the chariot swing. Practical? Not in the least. But man, what a marriage of engineering and art to have something like this, and built all to fit within the confines of a 43mm case. 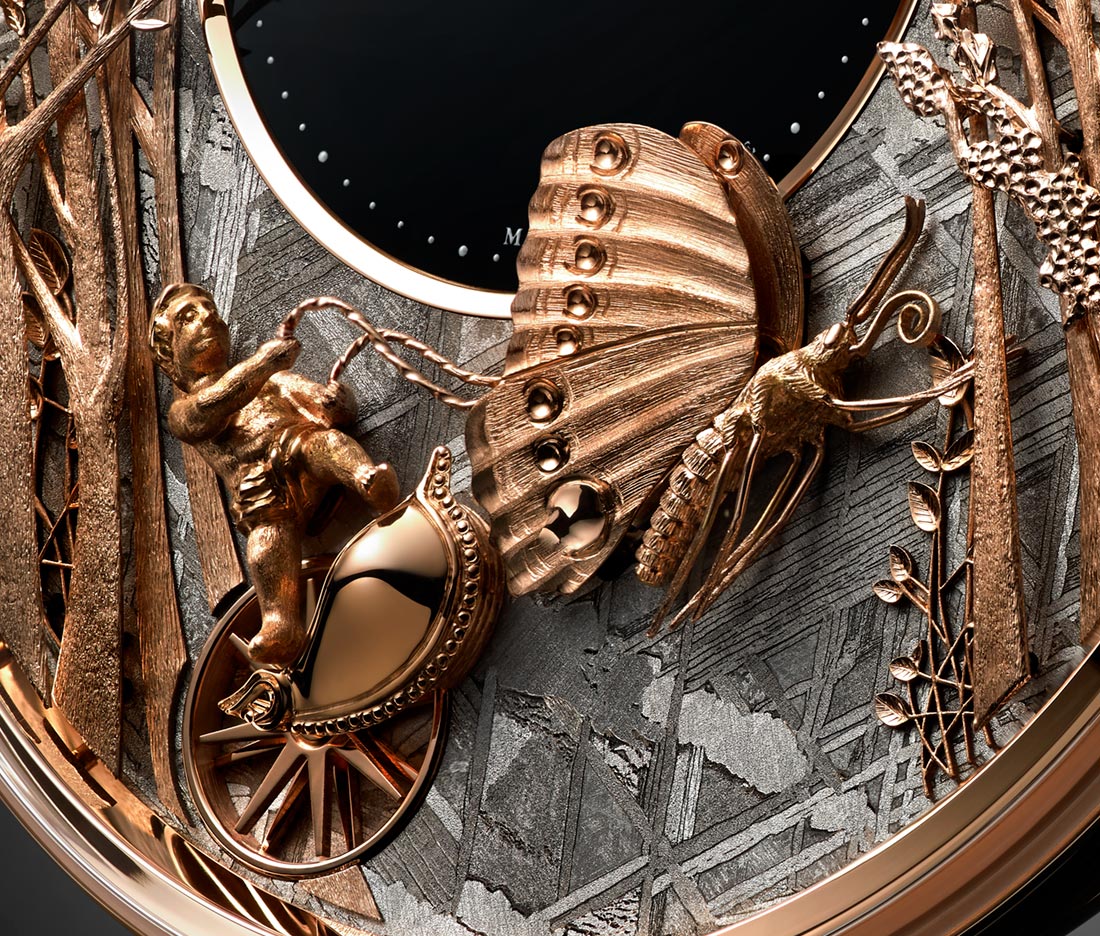 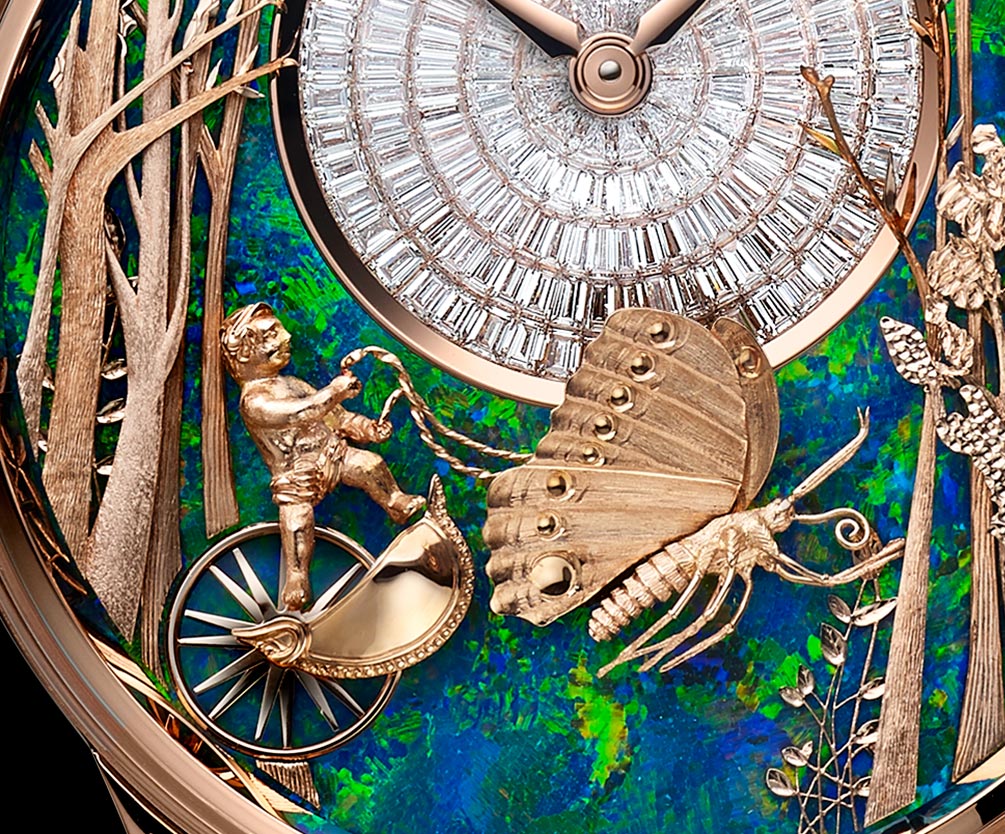 Now, I did mention the dials of the Jaquet Droz Loving Butterfly Automaton, and these versions for 2018 are special. The one that grabs the eye first is made of opal, with luscious blues and greens lighting up behind the carved sculptures and around the diamond-set… well, technically it’s a subdial, even though that’s where the timekeeping is done. Anyways, it’s lovely, it’s stunning, and it’s super rare, as only one will be made with this dial. Somewhat less rare are the other two variants, with 28 pieces being made. The one with the meteorite dial features the same red gold as the opal version, albeit with a leaden, crystalline sky for a backdrop. And then we have what is certainly my favorite – an aventurine dial that naturally displays a starry night, surrounding a mother-of-pearl moon. Combine this with the white gold of the automaton, and you can certainly envision it as a fairy tale come to life in some moonlight-drenched meadow. 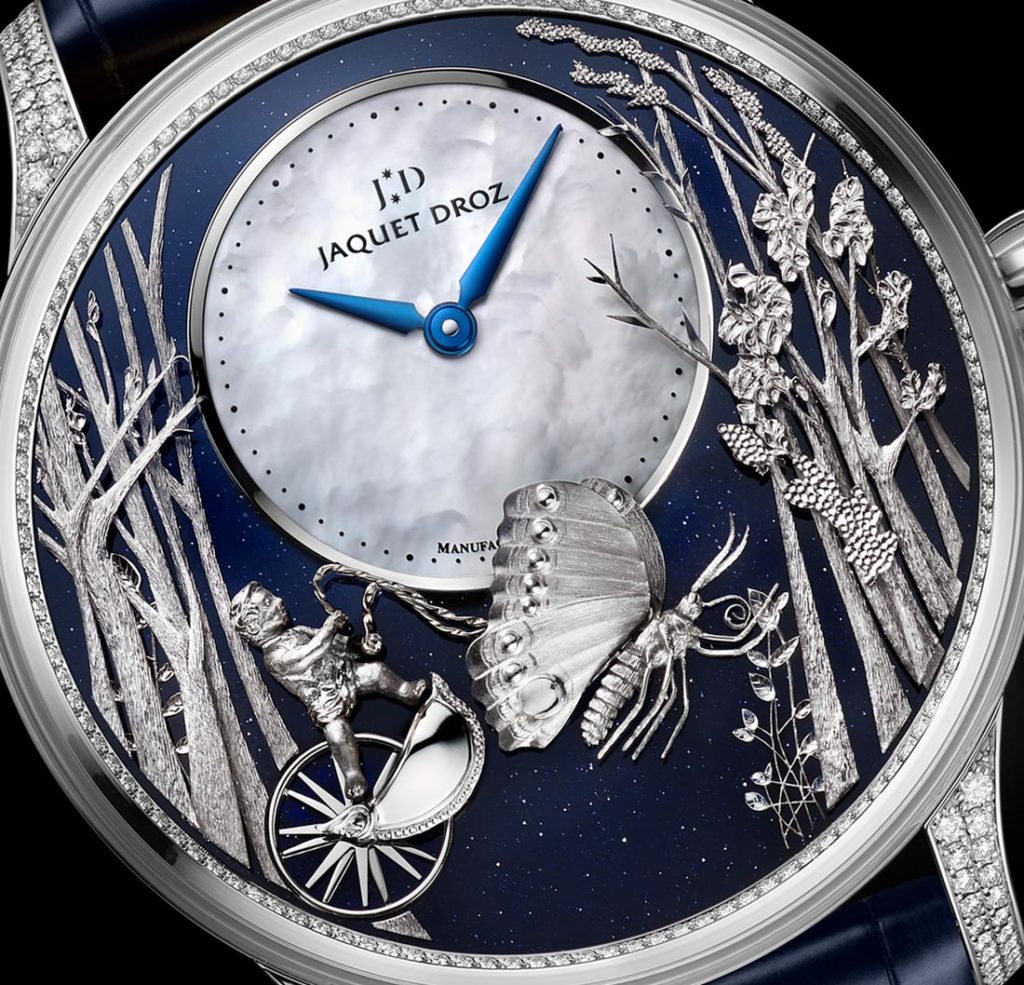 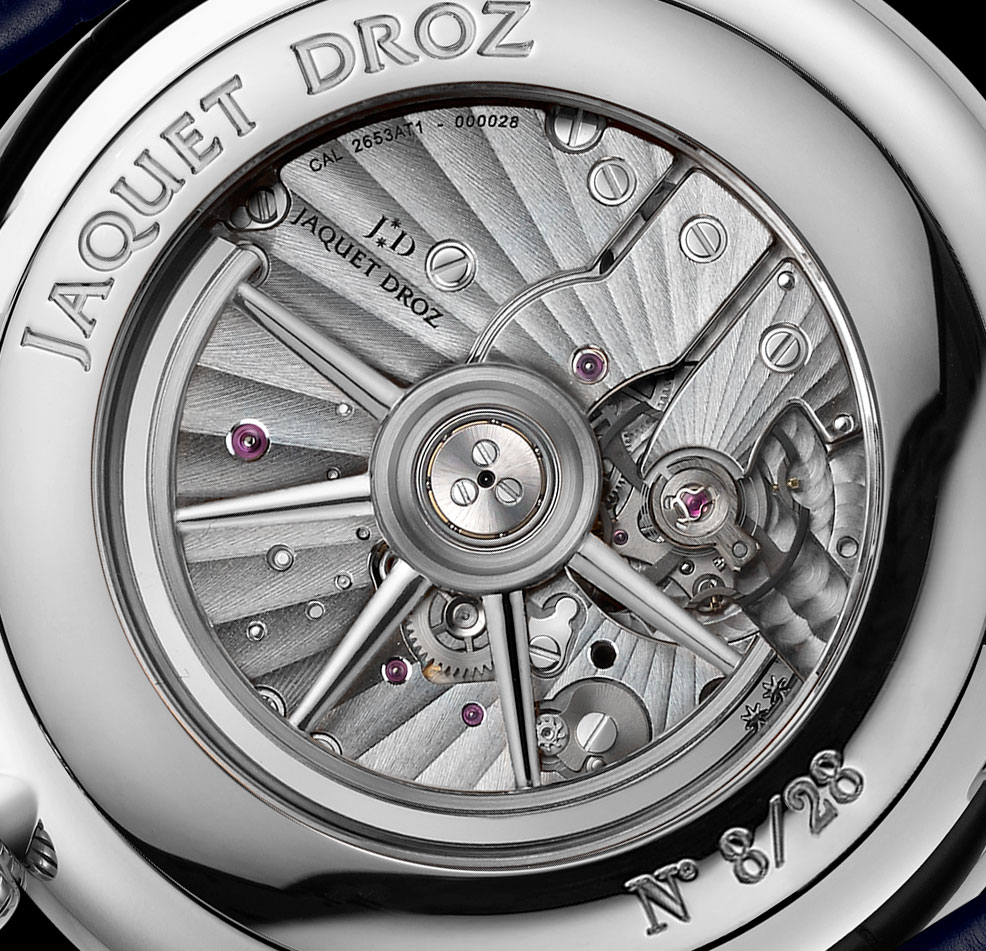 All of this, within the Jaquet Droz Loving Butterfly Automaton, is made possible by the Jaquet Droz 2653 automatic movement. For the timekeeping portions, you’ve got a silicon balance spring and pallet horns to keep you accurate, and a double-barrel configuration to store the power coming from the gold counterweight. That’s not all that we have in play, of course. You’ve got separate portions for driving the automaton. For that, the power is hand-wound, with a push button in the crown releasing the energy stored in the triple-barrel setup. Not that you see a lot of that via the exhibition caseback, but what do you see of the movement is finished quite nicely, to a level that looks on par for a watch of this nature. 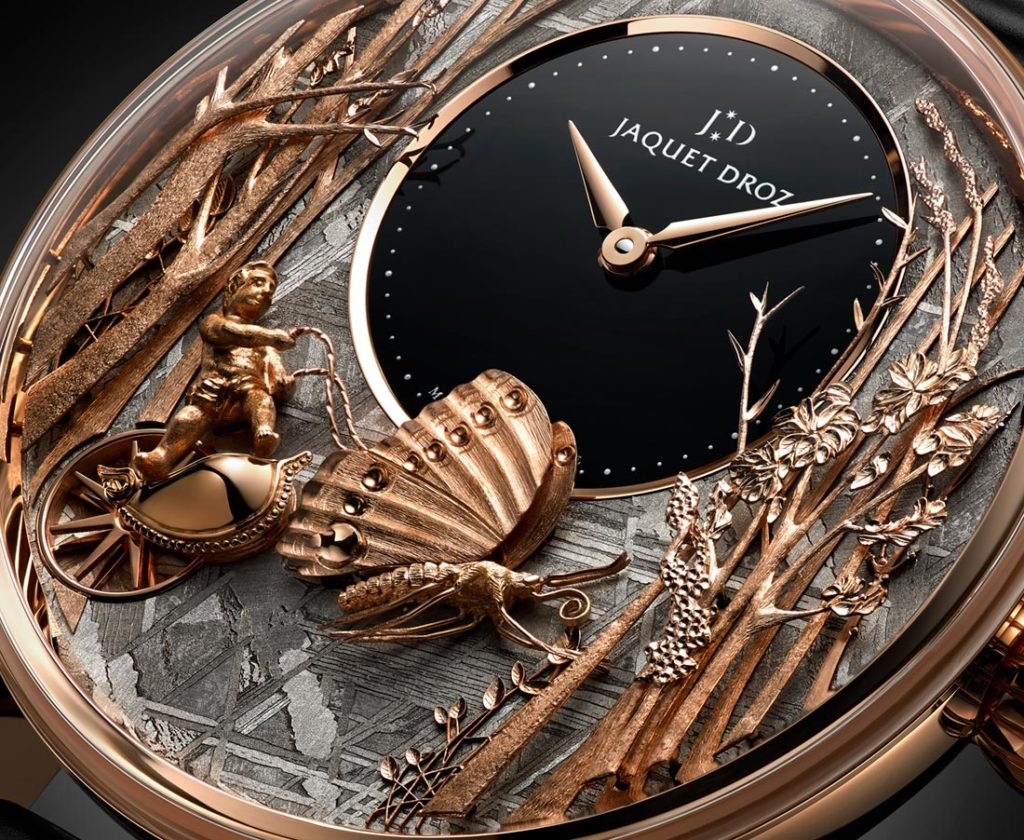 That just leaves us with one other key piece of data – how much would one of these lovely pieces set you back? The piece unique opal version of the Jaquet Droz Loving Butterfly Automaton commands a price of $262,500, while the meteorite and aventurine dial versions (both limited to 28 examples) come in at $126,000 and $136,500, respectively. So, while these would make a great end-of-year aBlogtoWatch team gift, that’s probably one #squadgoal that is unlikely to be realized. But that’s not what a piece like this is about. With the enmeshing of artistry and engineering, this is the sort of watch that can really capture the imagination and set your mind wandering. While more practical watches may keep us going day to day, it’s these watches that show what can be done when the watch designer is set free to create something unique. It’s the stuff that grail watches are made of, isn’t it? While I doubt I’ll ever own one, let alone see a Jaquet Droz Loving Butterfly Automaton in person, you can put me firmly in the camp of being a fan of not only this specific watch but even the more general idea of watches of this kind. They show us that watches, a functional piece of jewelry, really can be precision art in their own right. Learn more at jaquet-droz.com