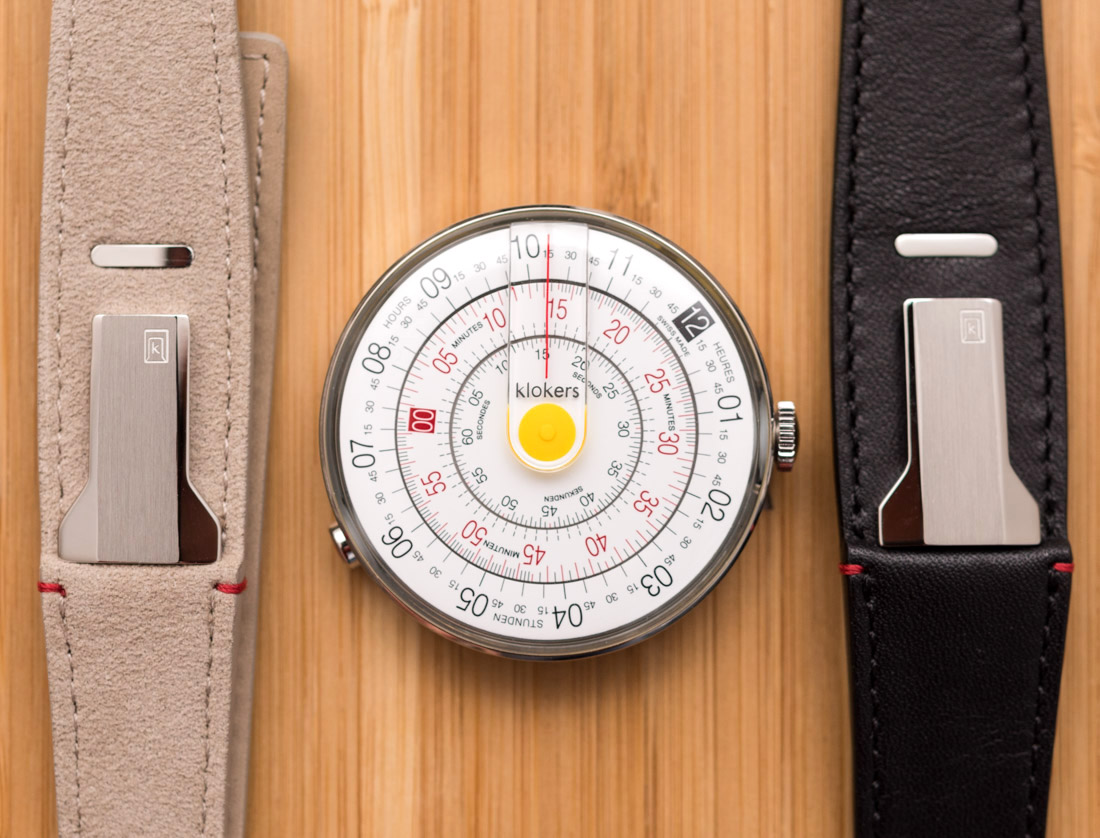 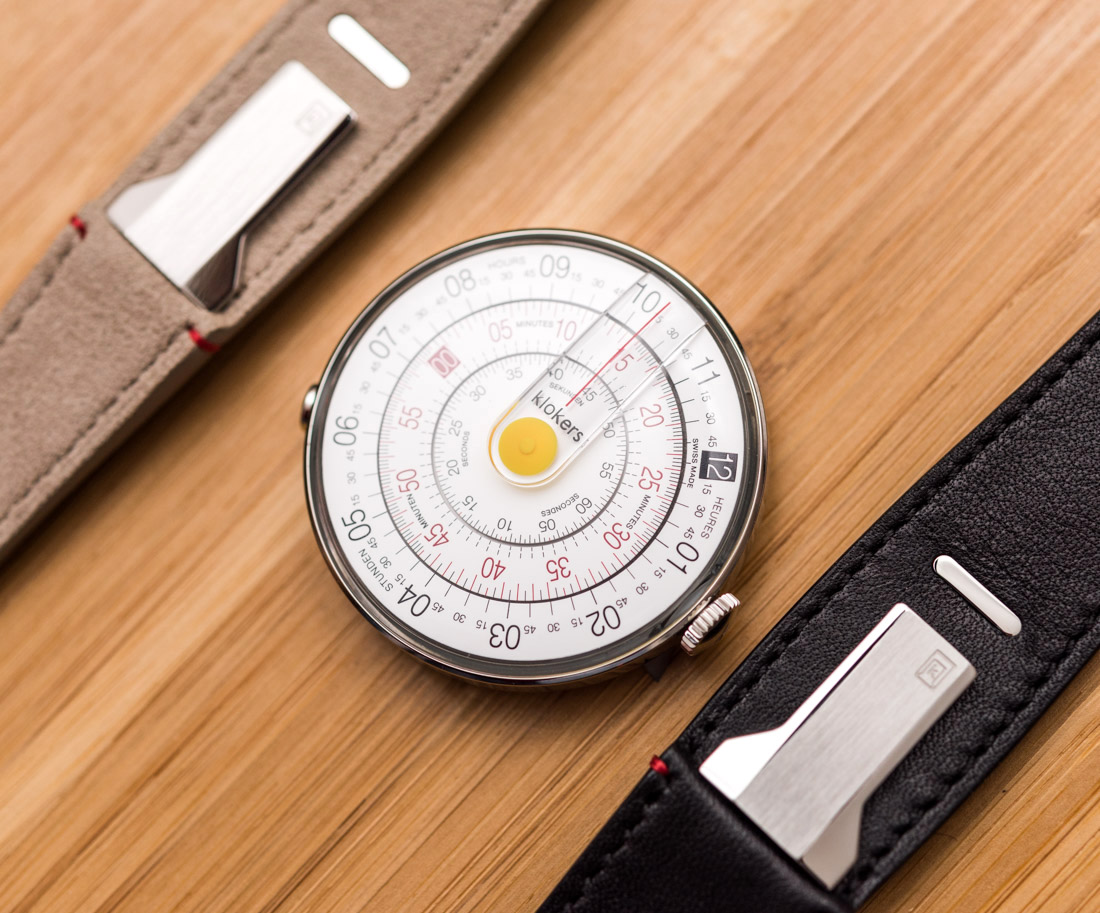 I genuinely like the concept of new, creative, and affordable watches that can serve as a viable alternative in the fashion watch segment for those looking for something more unique. This is the Klokers Klok-01, a Swiss-made watch from a French company that promises to blend unusual but functional design and solid quality with an affordable price – let’s see how it manages to deliver on those promises. 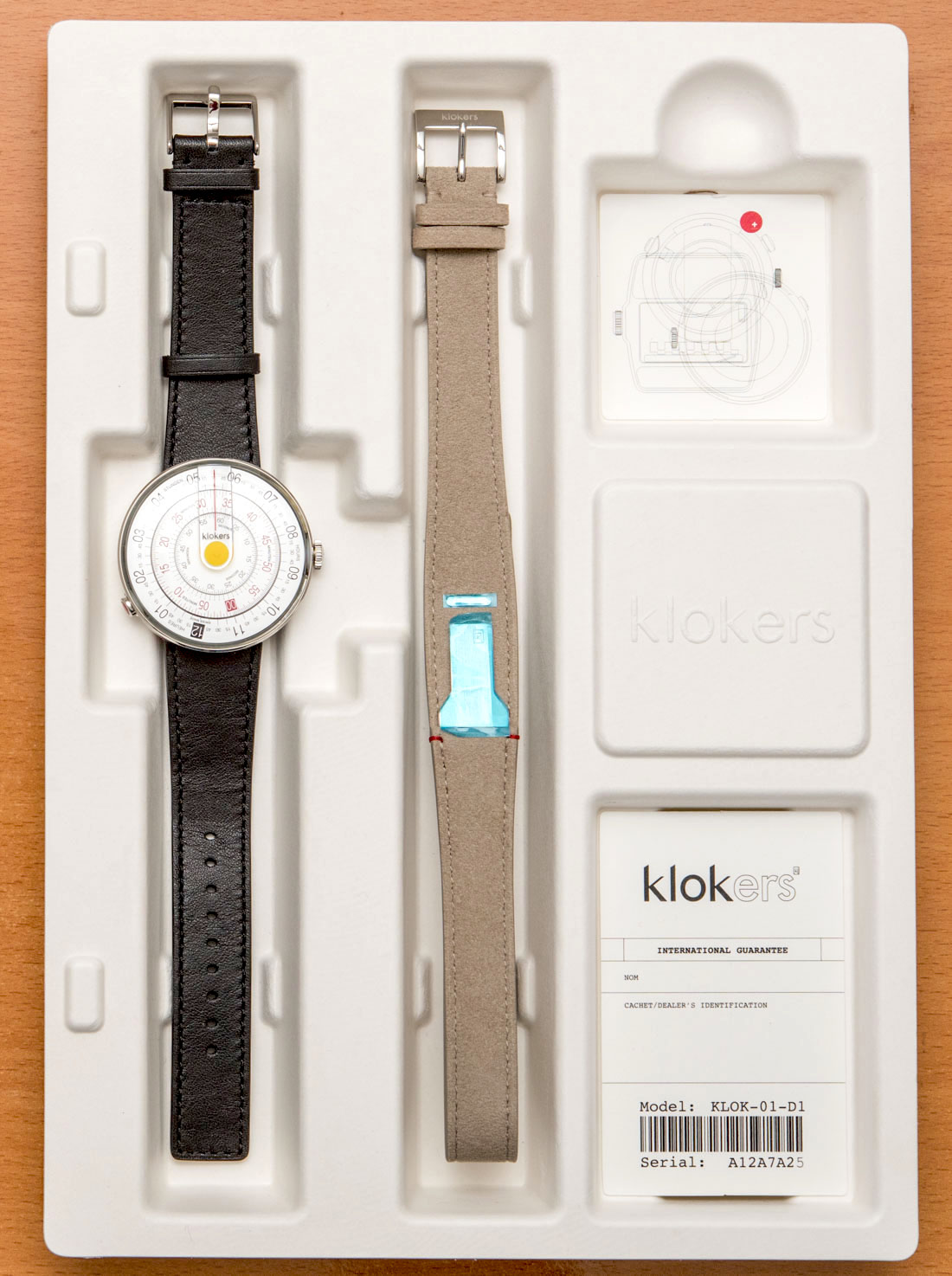 First, a few words about the very recent history of Klokers itself: Klokers was established in 2014 by an entrepreneur with a background in the Swiss watch industry, Richard Piras, and Nicolas Boutherin, with previous art director and general manager experience. They, like so many others, have decided to kickstart their project on, yes, Kickstarter, with Klokers turning out to be one of recent years’ success stories on the platform, having raised €605,898 from 1,563 backers. Anyhow, the Kickstarter launch is over, and the brand is up and running, so we shall get to the point: the Klokers Klok-01. 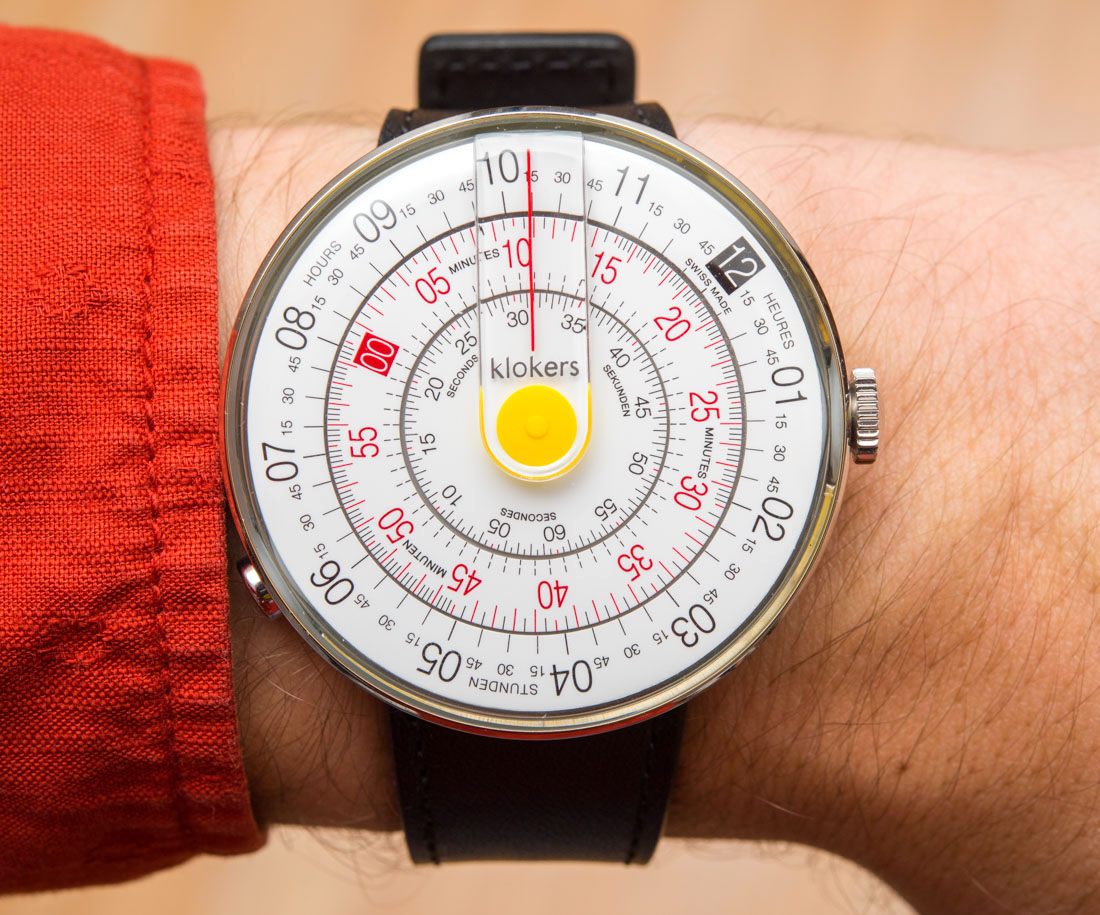 A most subjective element is of course design, but let us begin with this key point nonetheless. It may look busy at first sight – trust me, it will continue to do so – but once you figure this thing out, reading the time on the Klokers Klok-01 is nice and easy. 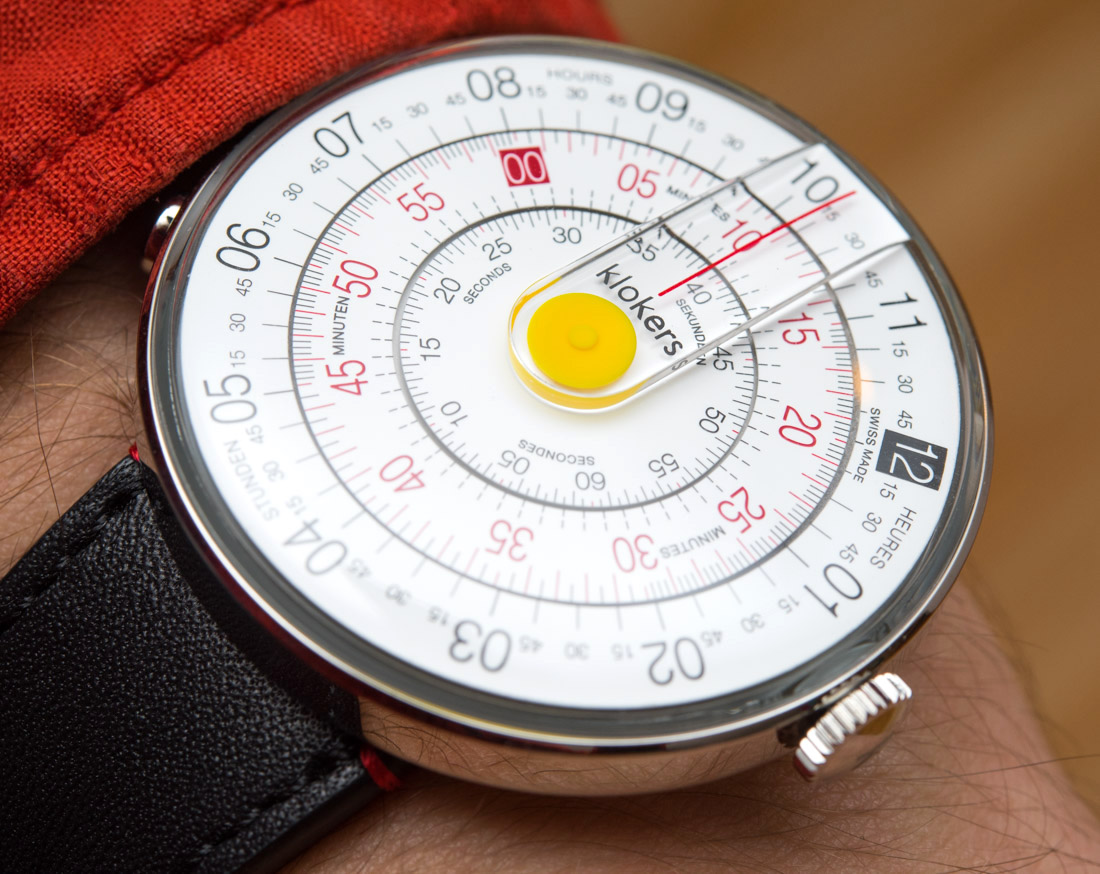 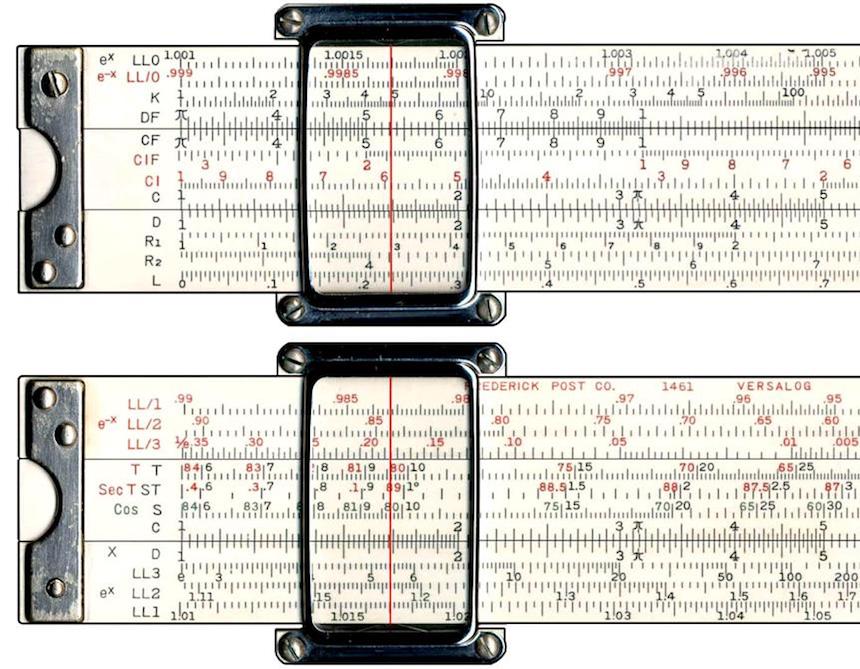 If the design looks familiar, that may be because it is largely inspired by “slide rules,” which were one of the faster methods for working out complex calculations before the advent of cheap pocket calculators. A slide rule is a ruler with a sliding central strip, marked with logarithmic scales to be used for making rapid calculations, especially multiplication and division. Klokers pays homage to this “iconic” (they call it that, though I’ll soon start to consider “non-iconic” things rarer than “iconic” ones), form-follows-function instrument with the brand’s first watch, the Klok-01. In reality, the Klokers Klok-01 dial looks quite fantastic, thanks to its unusual but logical layout and rarely seen (on watches anyway) fonts that never fail to make me feel I’m wearing an instrument used by doctors or scientists, or something. 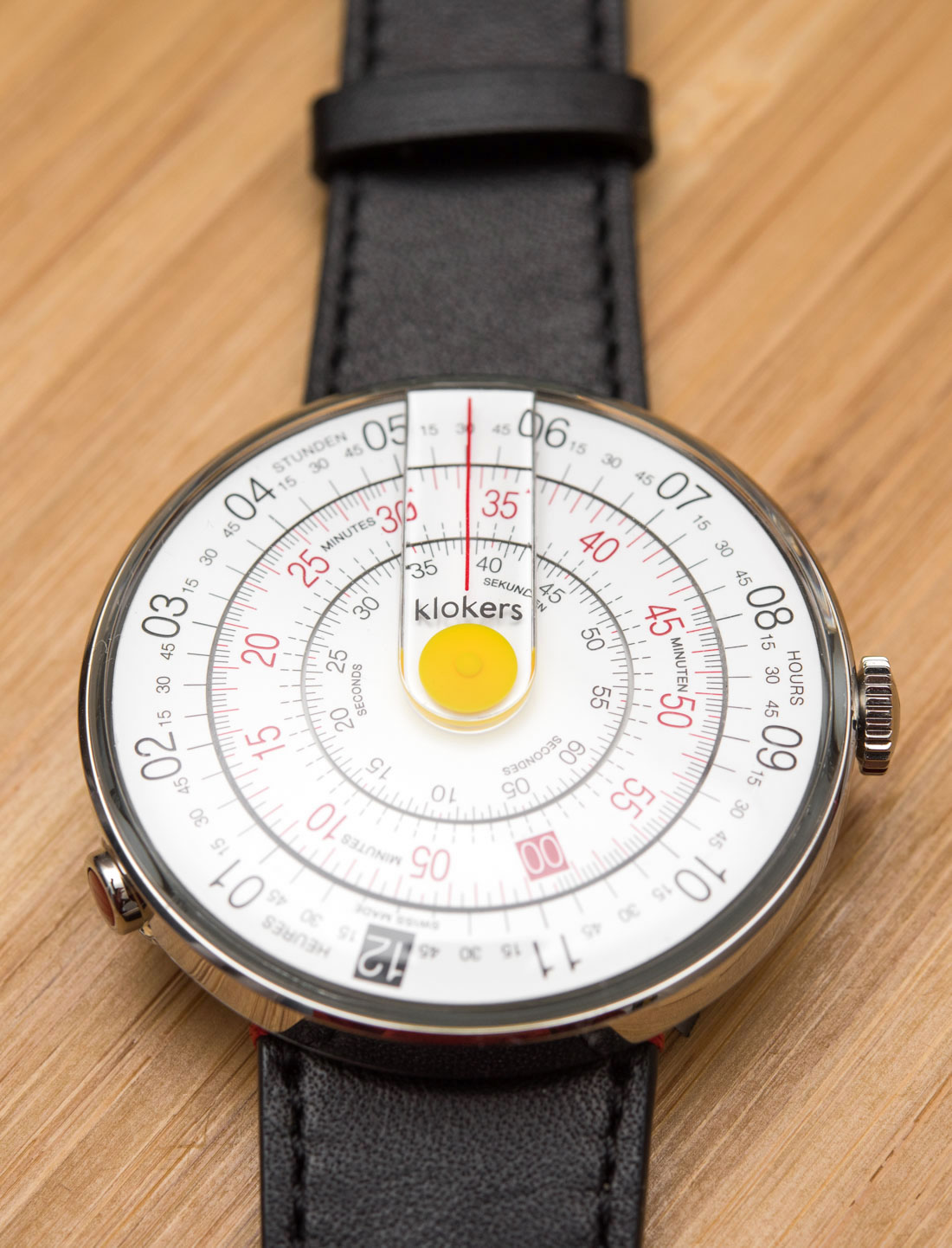 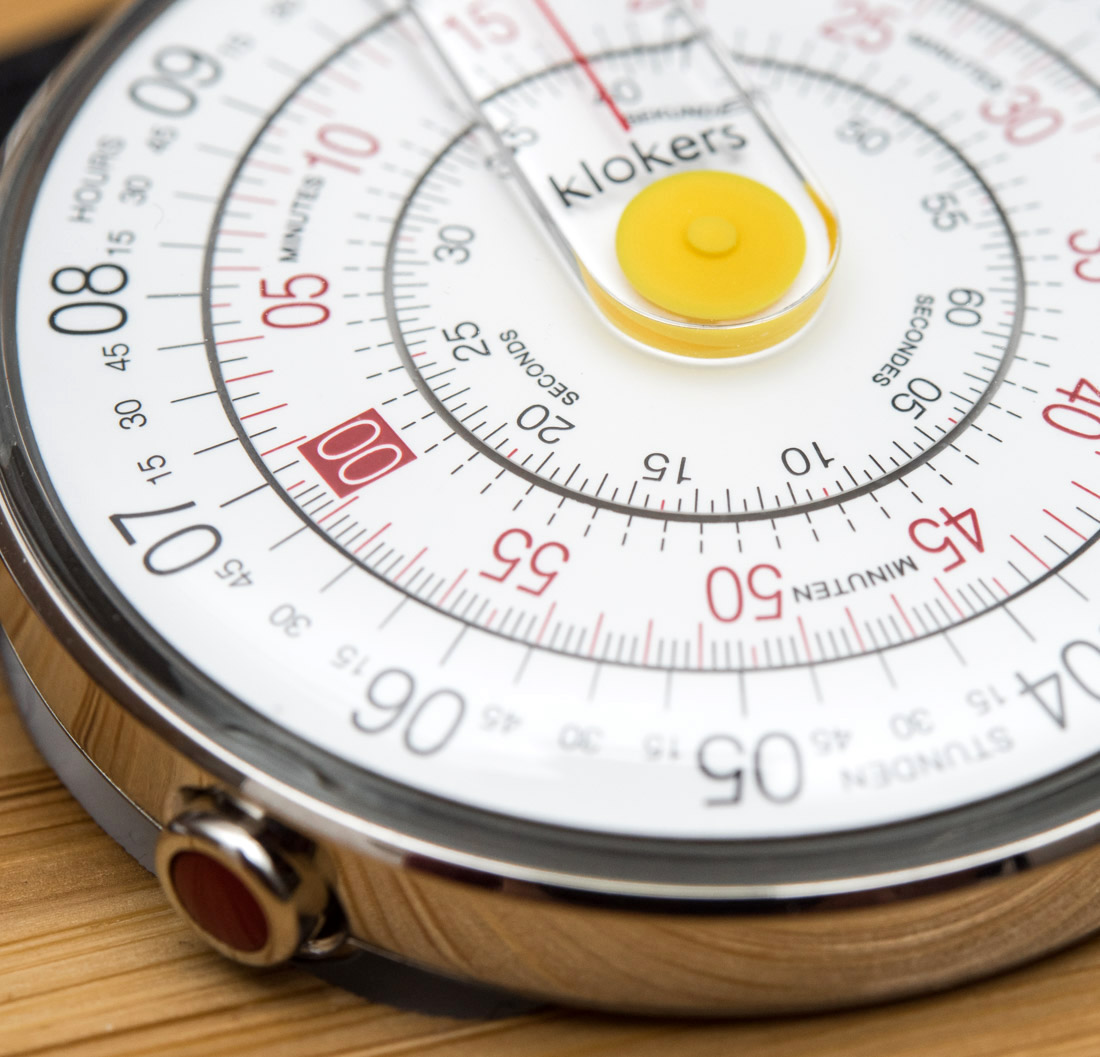 In essence, the Klokers Klok-01 display’s slide rule inspiration takes shape by using three concentric rings to display the time. The rings — one each for hours, minutes, and seconds — rotate at different speeds, and the time can be read easily via the red line drawn from the dial’s center up to where the 12 o’clock index would be. Better still, the crystal appears to be shaped in a way that it offers some magnification – with a negligible trade-off of slight distortion – yielding better legibility of some of those smaller indices. 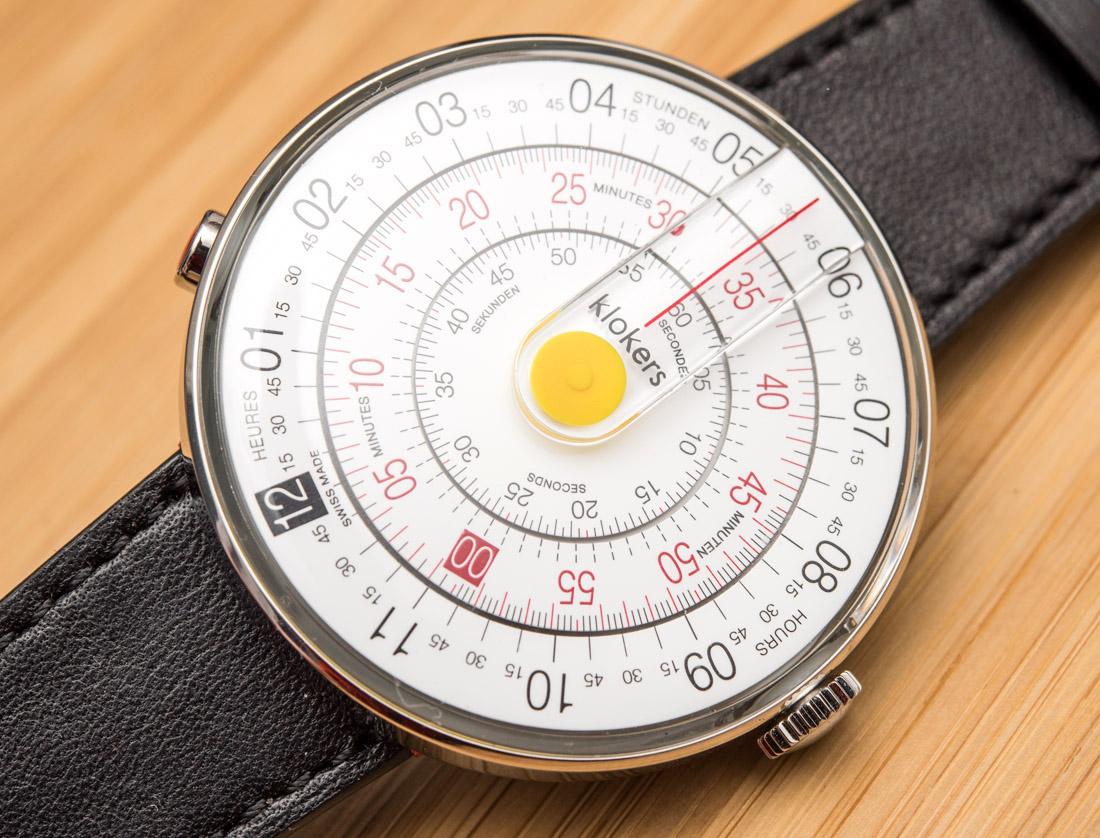 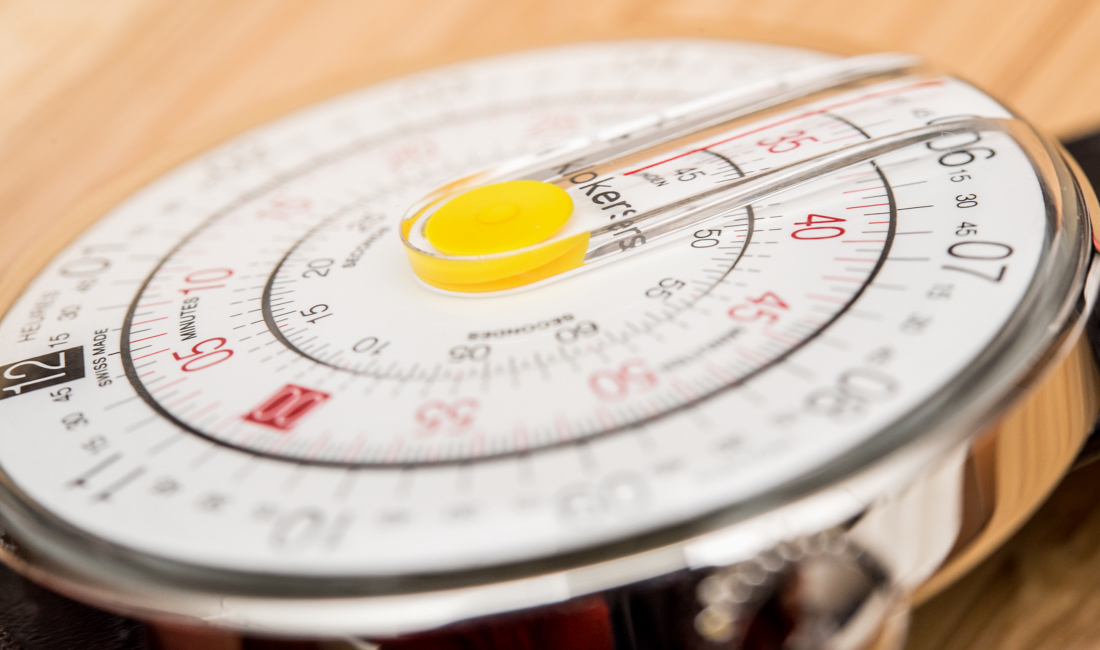 Setting the time happens via a traditional crown set into the case’s three o’clock position. One aspect that would require some refinement is what I believe to be a rather complicated gearing system and the “play” that it comes with: adjusting the minutes is not as accurate and tactile an experience as it is on higher-end mechanical watches; there is some wobble to the minute disc that makes setting it accurately a hair more difficult. Even with this slight occasional inconvenience, it is a lot of fun to pull out the crown and deliberately mess up the time, just to see the concentric rings spin at their own respective paces around the center of the dial. 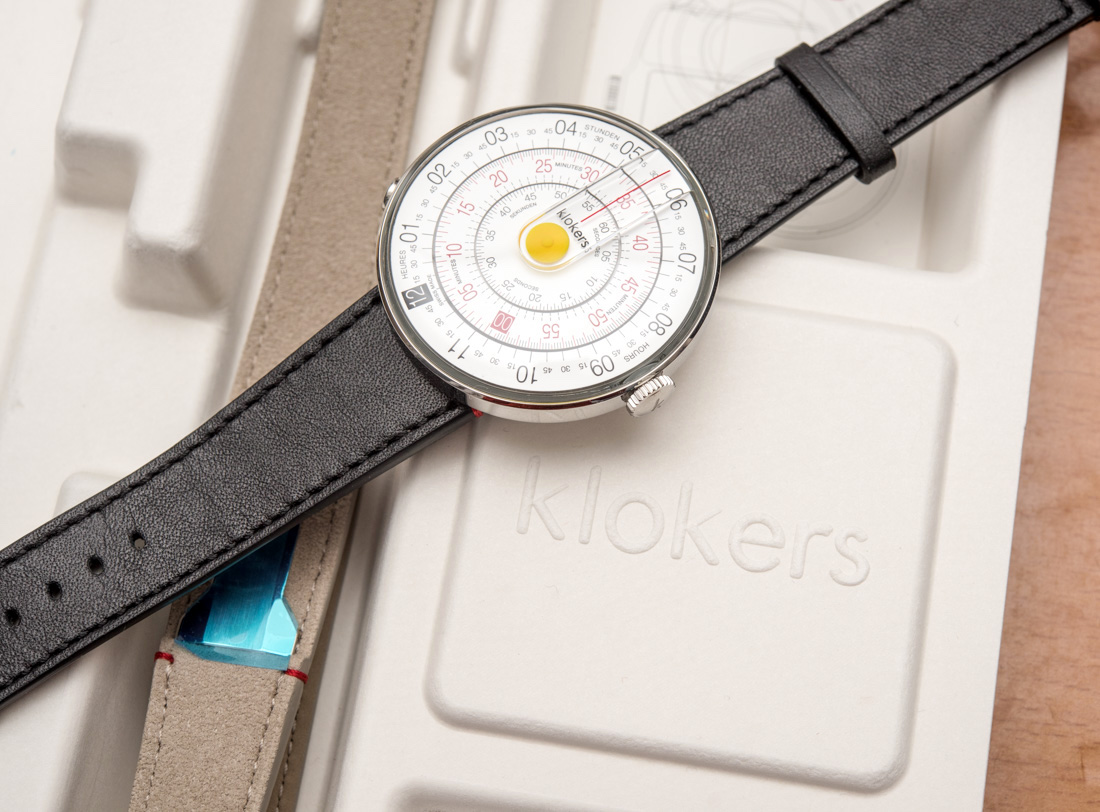 Speaking of which, the Klokers Klok-01 is available in three different colors, namely a yellow center with black and red indices, black center with some red accents on the dial, and blue center with blue and black indices. I personally like the yellow-red-black combination the most, because it is the most playful and fun looking of the bunch – one’s life, I reckon, should be able to tolerate at least this much color every once in a while. 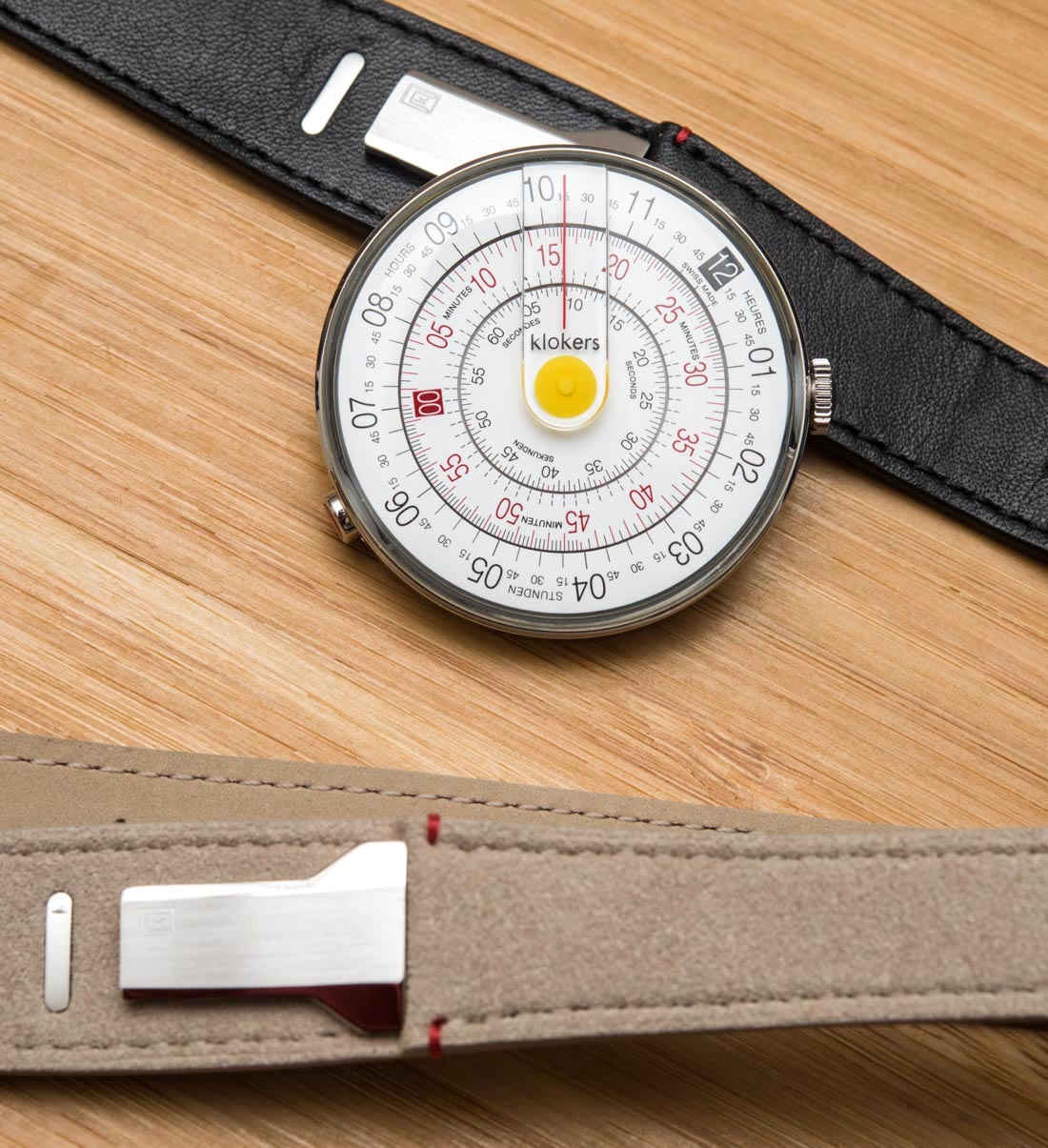 There are seven different strap colors and materials to choose from, ranging from suede and grained leathers to alcantara and from black and grey through dark blues, vivid yellows, and reds. If you are like me, you’ll find it hard to pick just one or two of these, they just work so beautifully with other accessories that one may have on his/her person for the day; though the pricy €119 (for the single strap) and €149 (for the double strap) options for additional pieces will likely work well as a hold-back. While the “Klink” straps are not at all cheap, they are very well made, with the quality of color, materials, and hardware justifying the steep price. 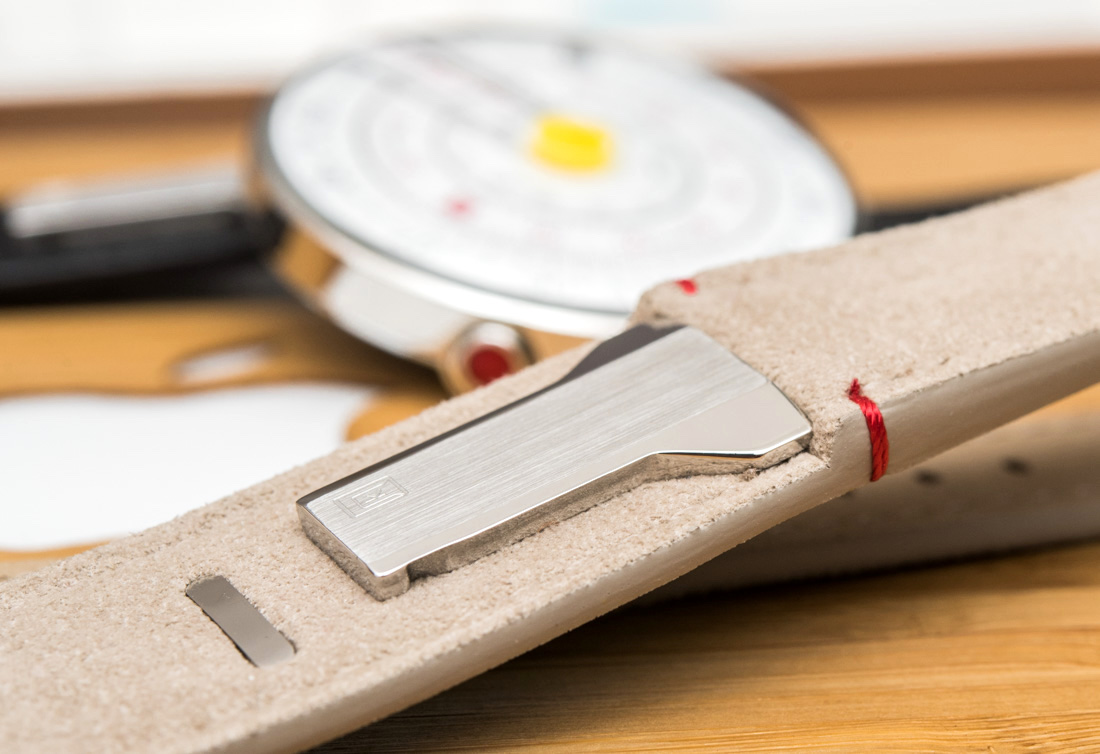 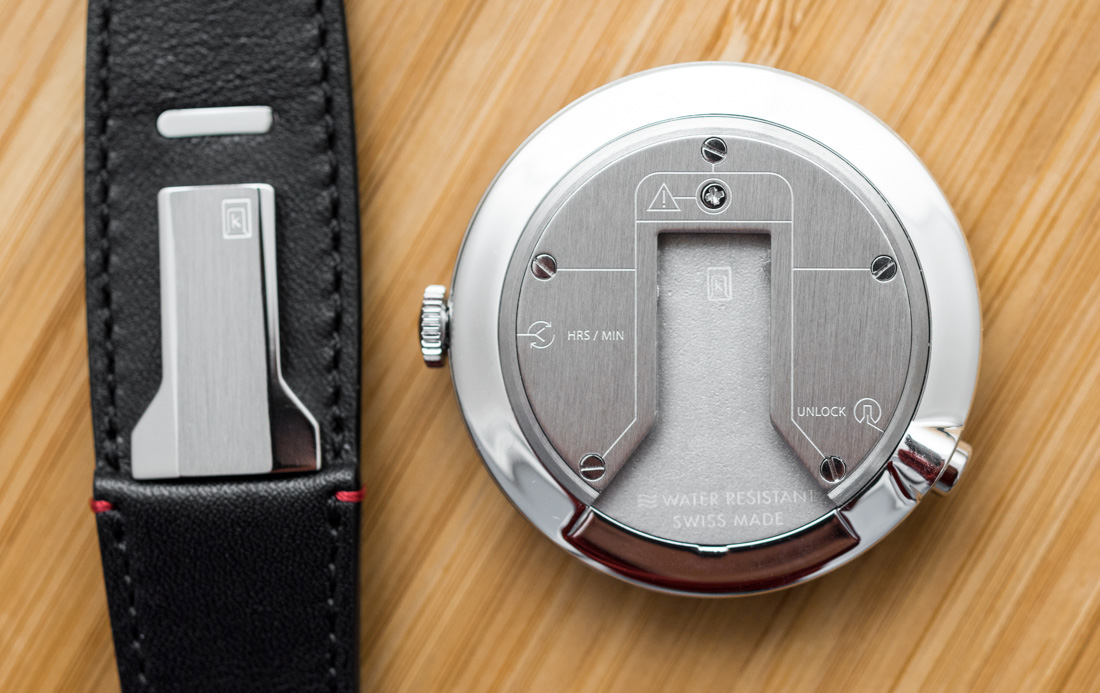 Speaking of hardware, Klokers has created and patented a strap-securing system that allows for easy changing and firm locking of the straps to the case. This “docking jewel,” as they like to call it, is fitted to the strap and is a T-shaped steel part that snaps into the case with a most satisfying and secure-sounding click. To release, press the button at the 8 o’clock position of the case and the strap releases. The mechanism is cool and works really well, it is pretty much impossible to get installing wrong or to break it.