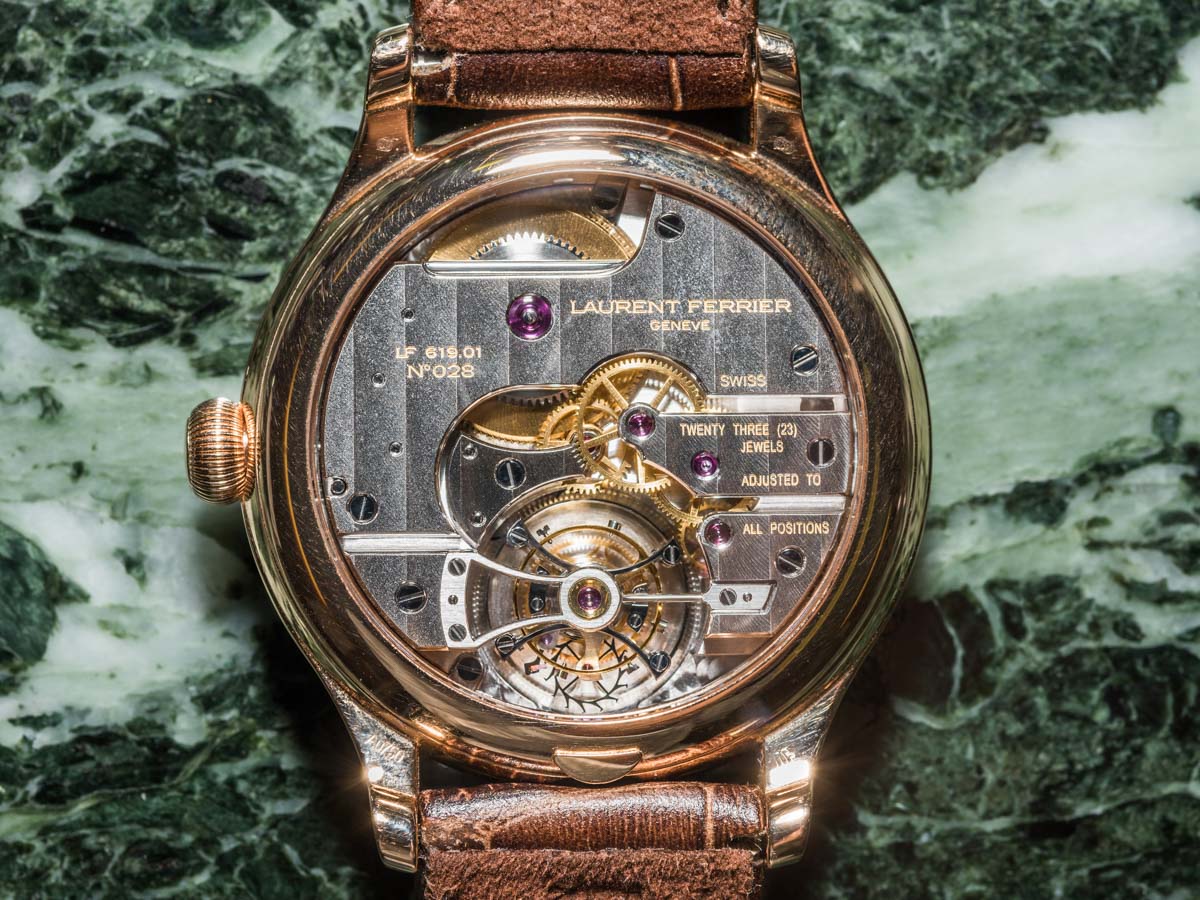 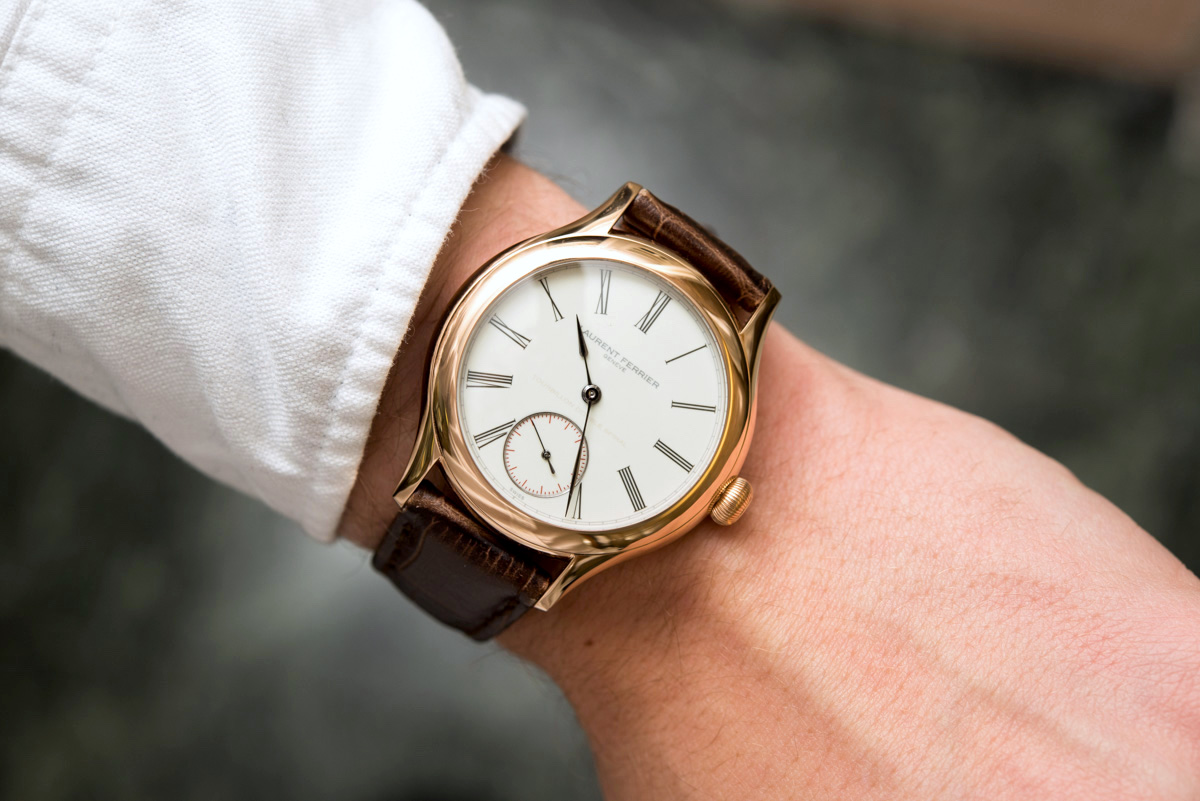 Watches can be tested in a number of ways. We learned that Casio catapults G-Shocks into slabs of concrete, I saw Parmigiani use a giant hammer-like swing to fire prototypes across a room… and, most recently, Laurent Ferrier let me wear their very fine Galet Classic Tourbillon Double Spiral for a week during SIHH. I’ll say the three techniques must be pretty much equally strenuous. Here’s what wearing a truly fine piece of horology during the watch industry trade show marathon was like and how it held up. 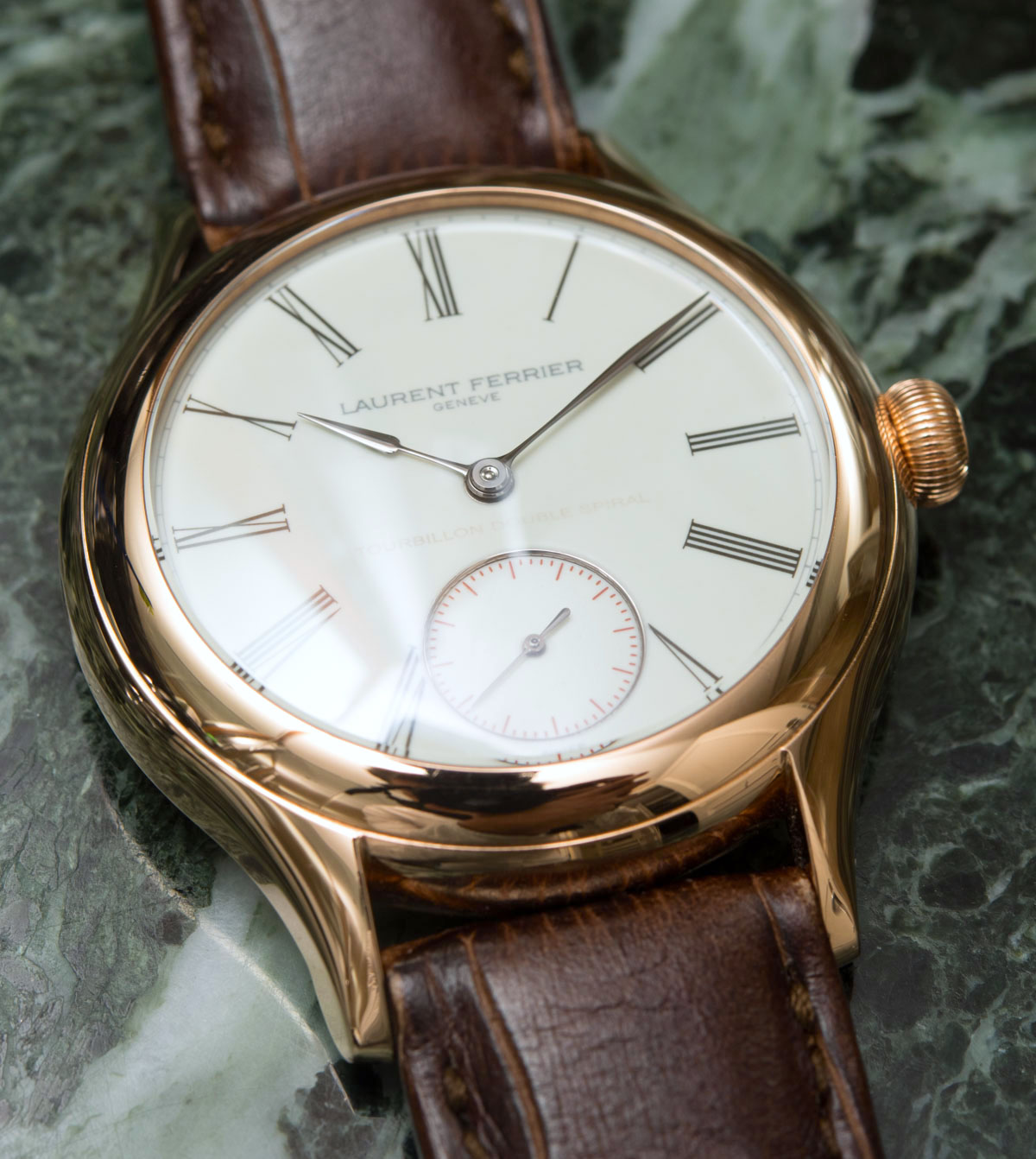 First, a very quick reminder on where Laurent Ferrier – both the brand and the man – are coming from. Laurent Ferrier is a 37-year veteran of Patek Philippe who retired from the company as creative director only to start his own manufacture not long thereafter, in 2008. Laurent Ferrier is among the few true old-school watchmakers in the best possible meaning of the term. 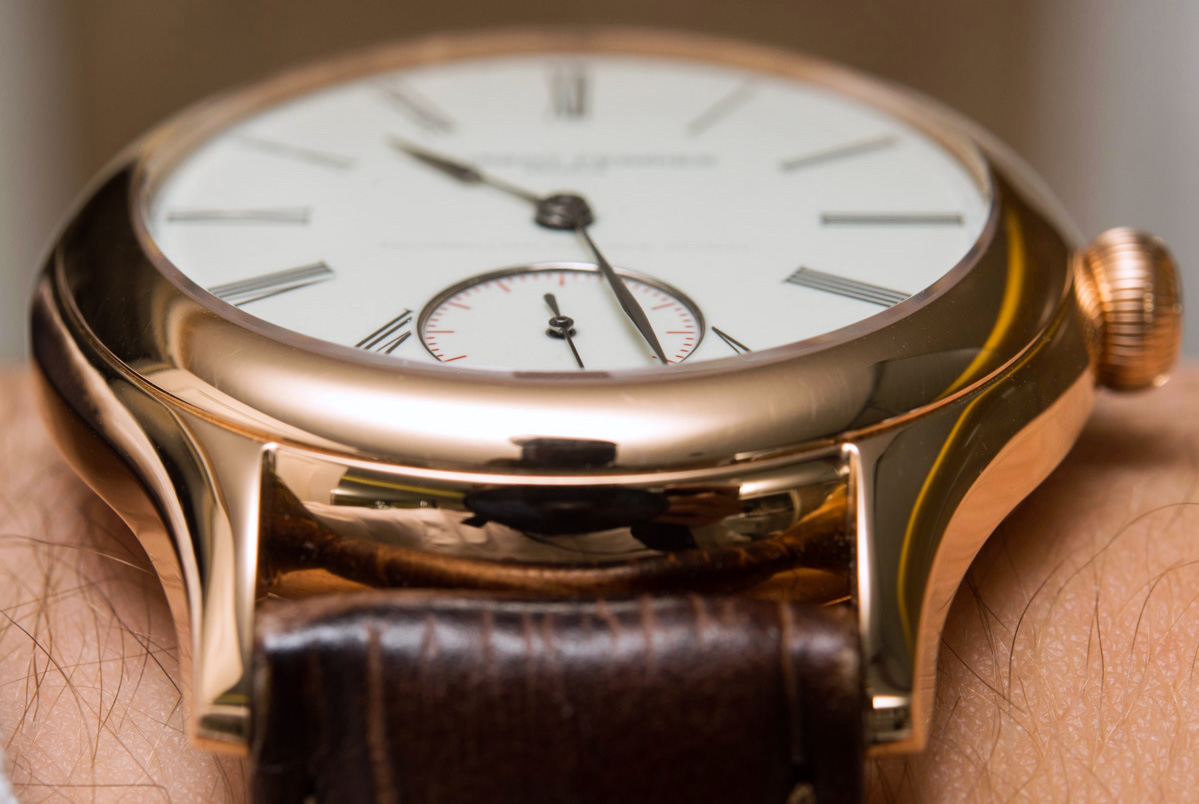 Patek is Patek and, thankfully, Mr. Ferrier clearly did not set himself a path of creating his brand as a tribute to it. Instead, he took the watchmaking traits that make Patek great and added a generous extra dose of sensibility, exclusivity, and restraint to the mix when designing his core collection pieces. The Laurent Ferrier manufacture presently employs 12 people and produces fewer than 150 pieces a year – talk about a quick pick-up in productivity for a newcomer brand. We were also told that this is about as many LFs as will be made per year going forward.

Mr. Ferrier also likes cars and has even been successful in racing them – but that’s about as personal as we’ll get with him in this review because we are here to talk about the watch and not to help you ask Mr. Ferrier out on a date (though you can learn more about his background and racing in the 24 hours of Le Mans in our interview with Mr. Laurent Ferrier here). 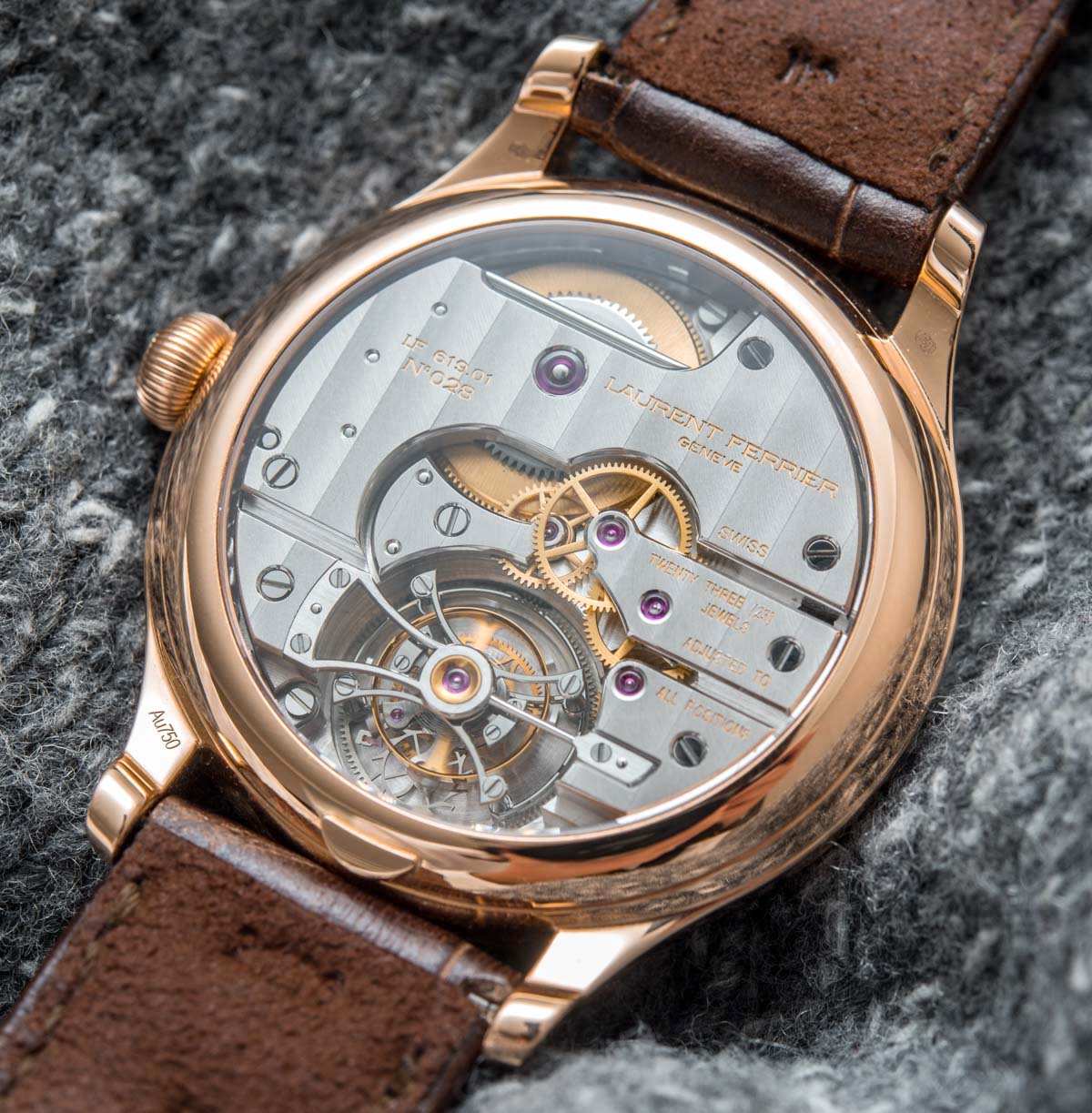 The Laurent Ferrier Galet Classic Tourbillon Double Spiral is, in its own right, an “ultimate watch” – not “the ultimate” per se, because calling it that would be highly irresponsible of us and disrespectful to all the other amazing timepieces out there. Political correctness aside, the Galet (or, in English, “pebble”) is so good, it is like someone took all that is great about classical watchmaking, put all that into a giant blender, placed whatever came out in a bottle, set it on the highest shelf in the best wine cellar, and distilled the resulting essence into just one watch. Yes.

And you know what? As butchered as that metaphor was, it sort of is what happened. The Galet Classic was not designed by a committee or a famous designer and is not strictly based on a previous watch design like some of the willfully unimaginative vintage re-releases are these days.

Rather, every minor and key element of it looks and feels like it was conceived and approved by one man with a set of eyes and mind that have been occupied for decades with solving problems linked to watch design. 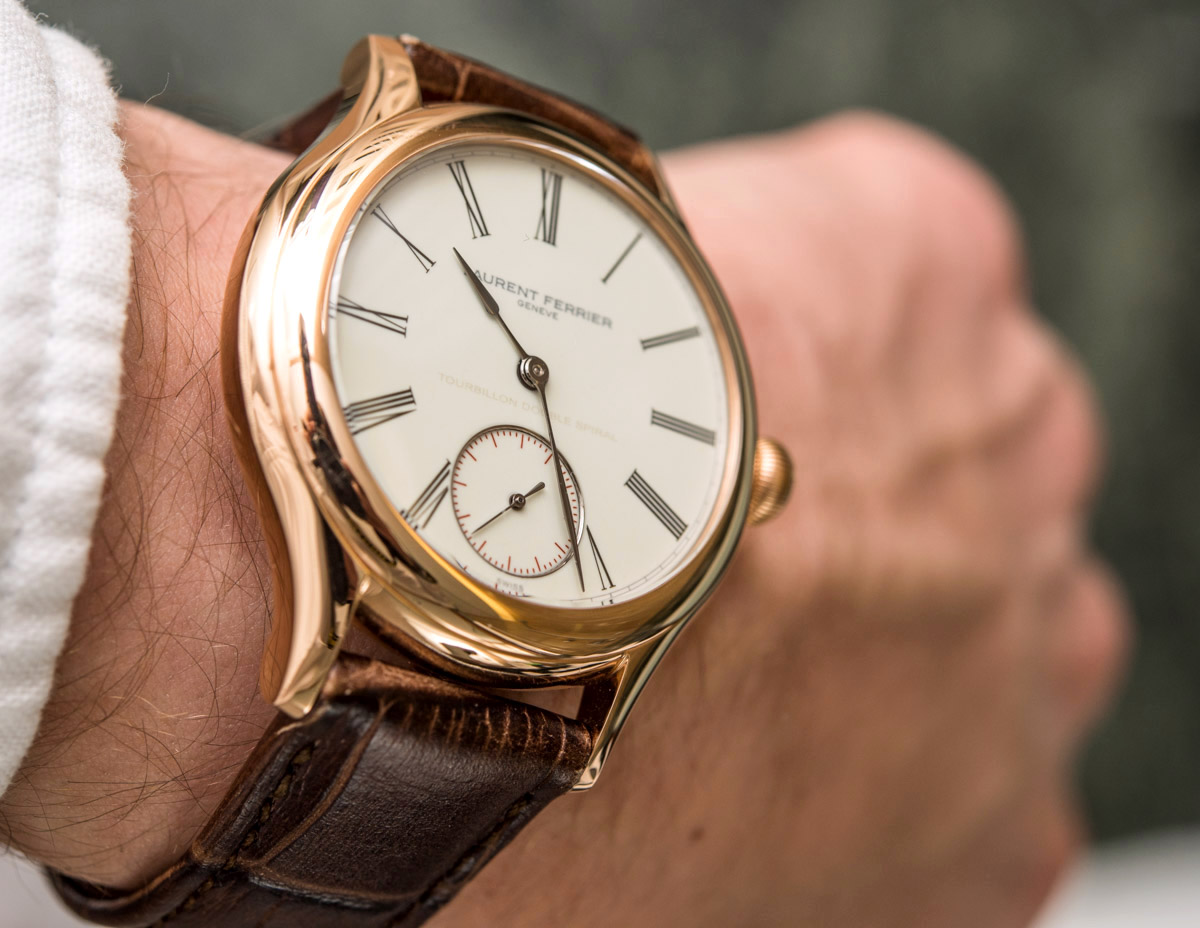 At 41mm wide and with its long, gracefully curved lugs, the Laurent Ferrier Galet Classic Tourbillon Double Spiral has just the right wrist presence without looking outdated and small or unnecessarily large. The case is a notable 12.50mm thick, something I found difficult to believe given how slender the curvy profile and bezel make the case look. Because there are no strong edges – reminiscent of a pebble worn smooth by the current of a river – the Galet just loves to slide under shirt sleeves, leaving it ever more discreet and under-the-radar. 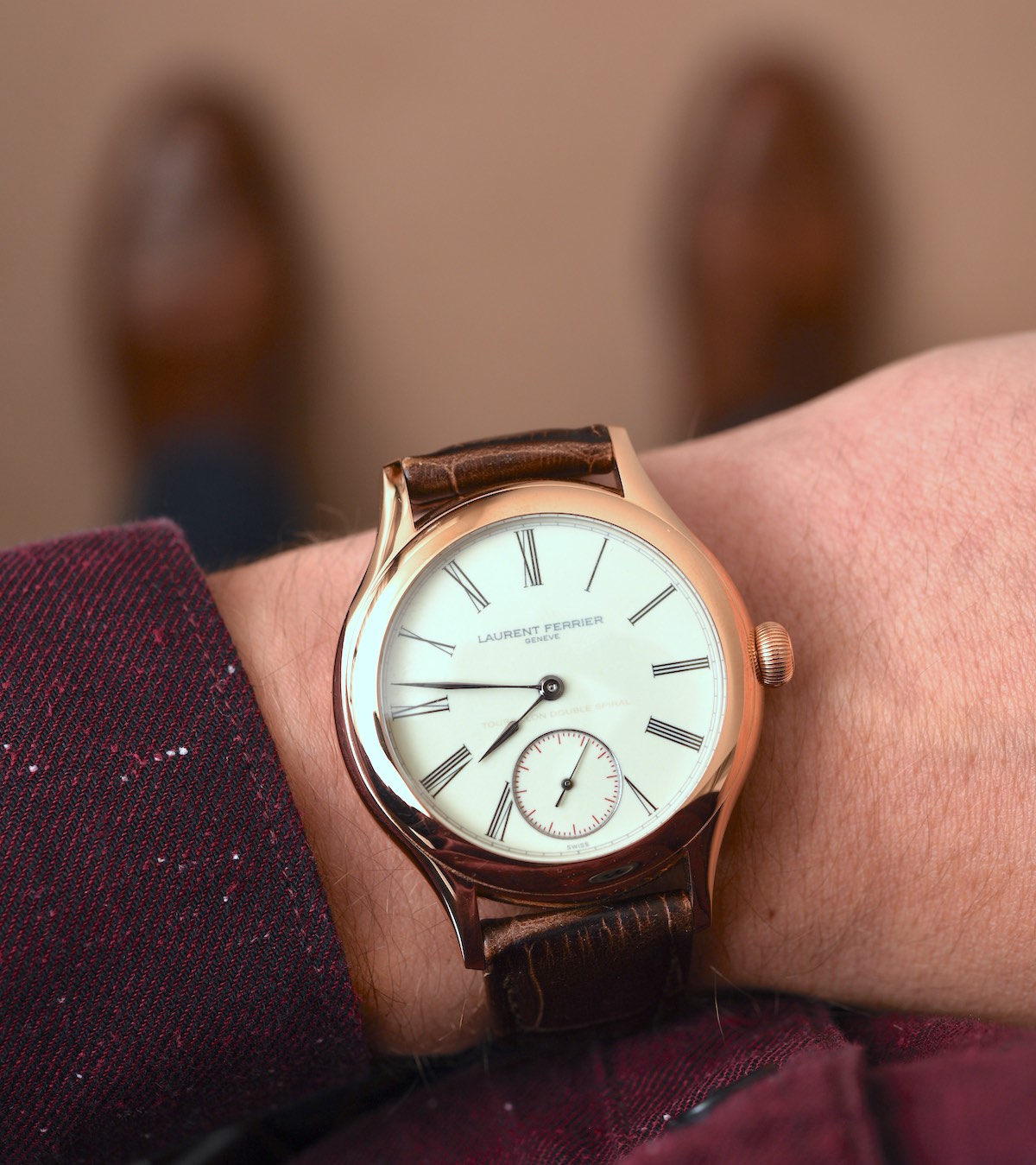 Speaking of discretion, this brings me to the “tour de force” of the Laurent Ferrier Galet Classic Tourbillon Double Spiral: its remarkably subtle appearance. In other words, it is “stealth wealth” at its very finest. At a fair bit over $200,000, this is a very expensive watch, even by Swiss luxury watch standards. I wore this very watch on every day of SIHH 2017 as we met with an impossible number of industry veterans, fellow journalists, retailers, and of course, the kind people representing exhibitors. Enter the adventures of a shy tourbillon at SIHH. 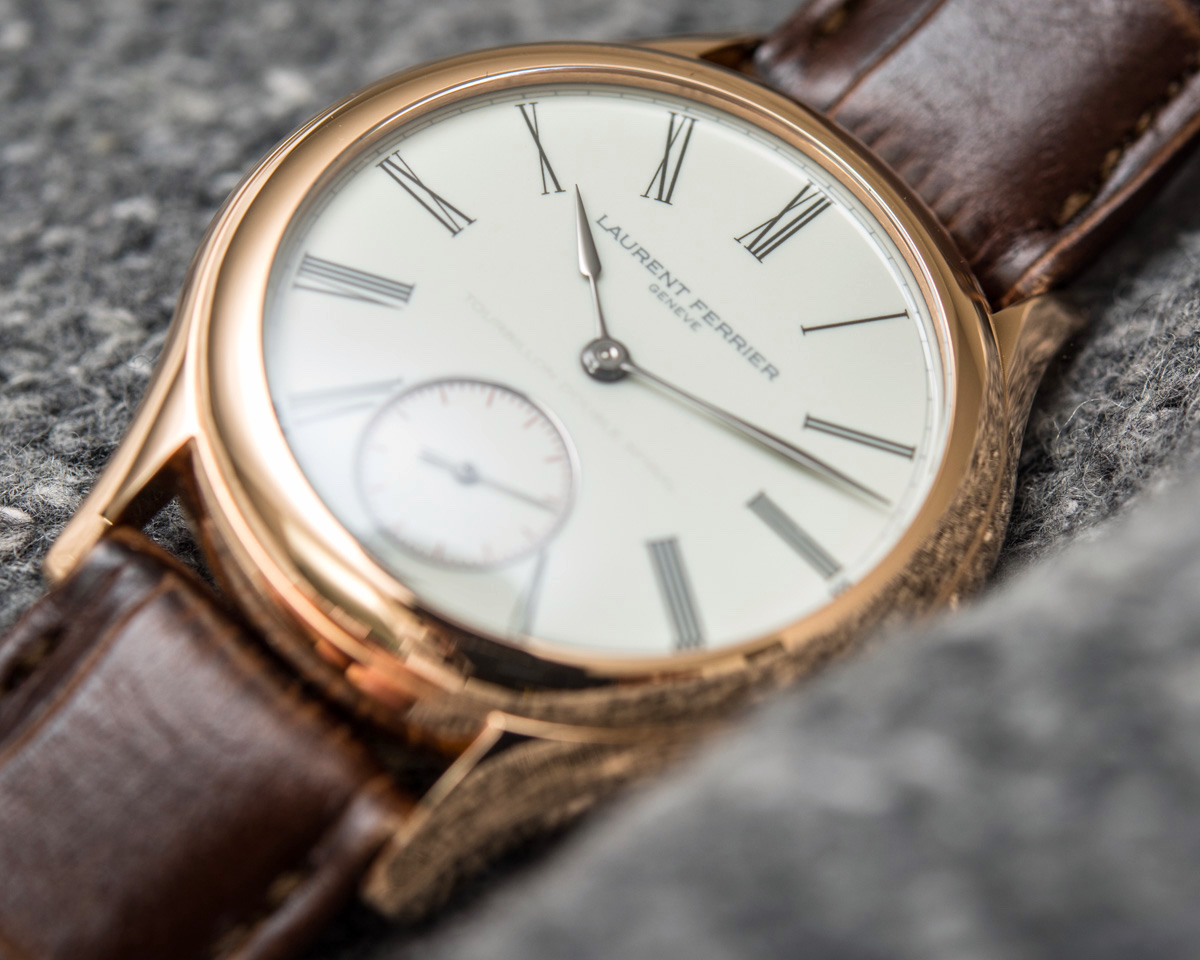 I was very curious to see how this watch would be recognized or ignored by people whose bread and butter is knowing watches inside and out, as well as by the non-watch-savvy people I’d meet outside of SIHH. Despite its solid gold case, the Laurent Ferrier Galet Classic Tourbillon – yes, a six-figure-priced tourbillon – almost exclusively attained as much attention as any other gold-cased, leather strap-equipped dress watch: not much. 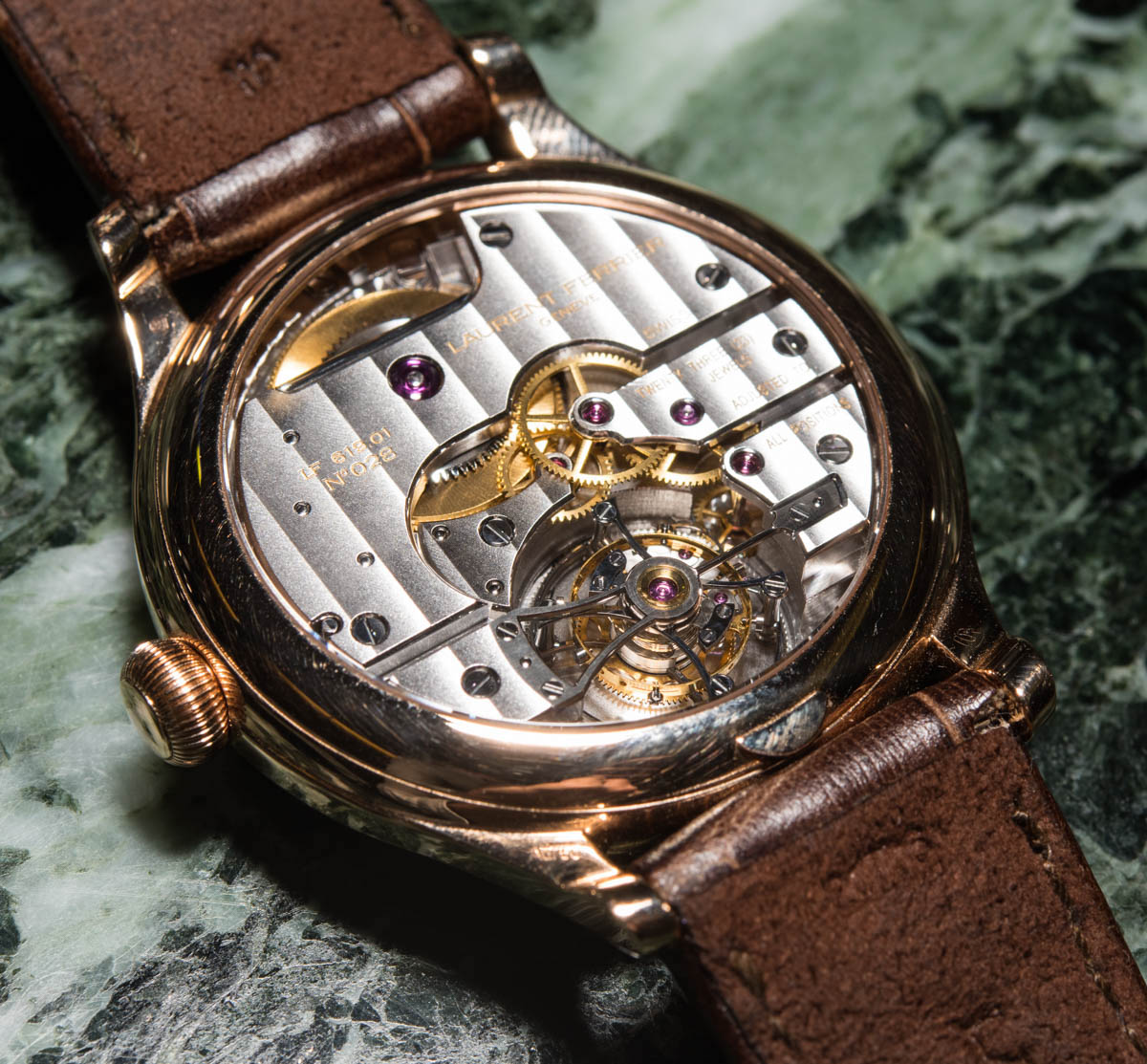 I didn’t stop there and instead of wearing it on my right wrist when reserving my left one for wrist shots of novelties, I started taking the watch off and placing it on the table around which we’d sit and where the novelties would be presented. You probably won’t be surprised to hear that the watches we wear are almost always part of the 30-to-60-minute-long meetings, and so when I answered the kind “and what are you wearing?” question, about 50 percent of the time I could see people have little to no idea what this watch is about. 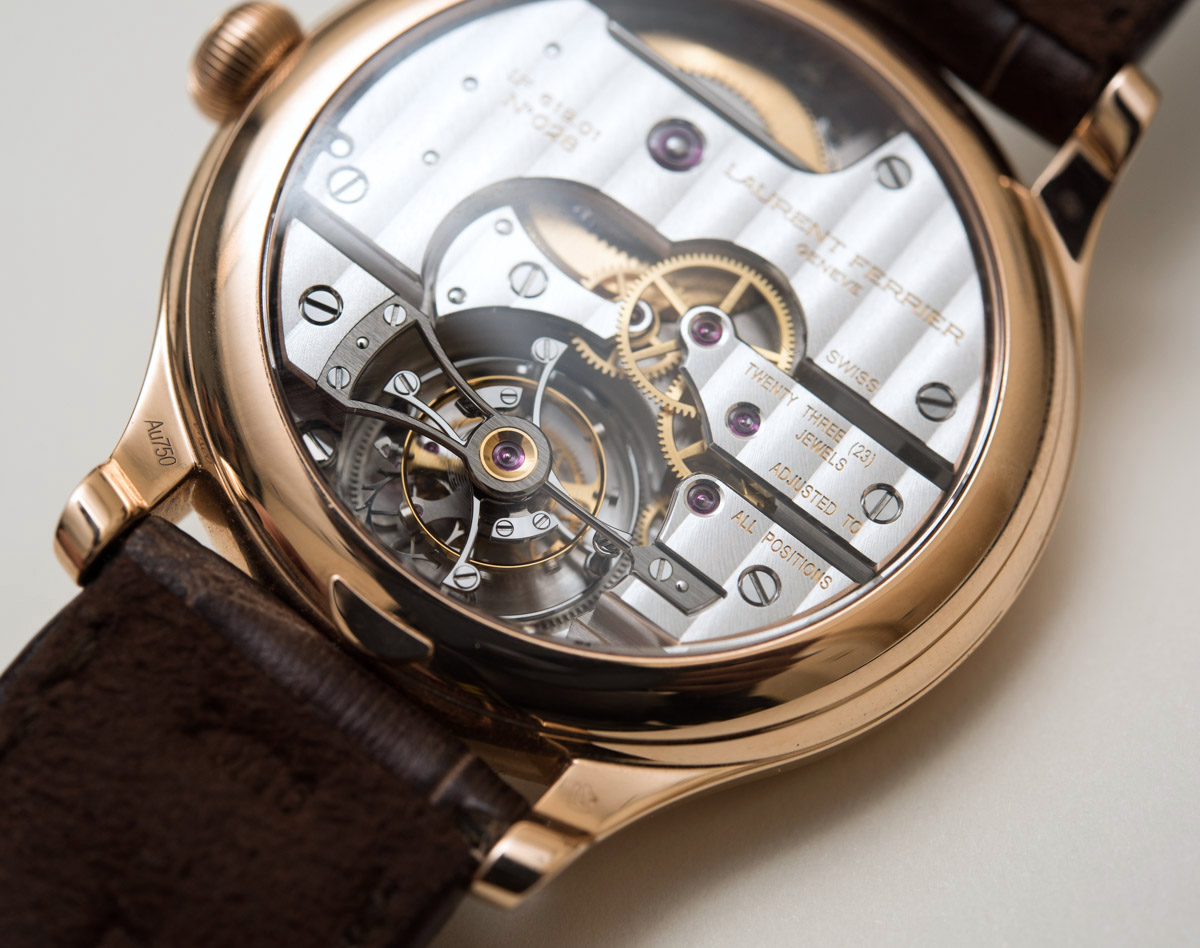 Funnily enough, it even happened at a few meetings that the watch was curiously picked up in a way that, well, didn’t apply the same sort of care the person would treat their own merchandise, only for them to turn it around and their faces to turn to a look of shock, quickly understanding the unexpected, and end up putting the watch – very gently this time – back on the table.

So, are the findings of this not at all scientific experiment a good or a bad thing with regards to the Laurent Ferrier Galet Classic Tourbillon Double Spiral? That really depends on what you want from your six-figure-priced tourbillon. But given the unquestionably discreet design of it, I will say that the watch performed extremely well at flying under the radar even of many (though certainly not all) industry people. It should go without saying that a much smaller percentage already knew the brand and maybe even the watch, and they were keen to ask for a hands-on look since this truly isn’t a watch you see every day – not even when its maker is now one of the exhibitors at SIHH. 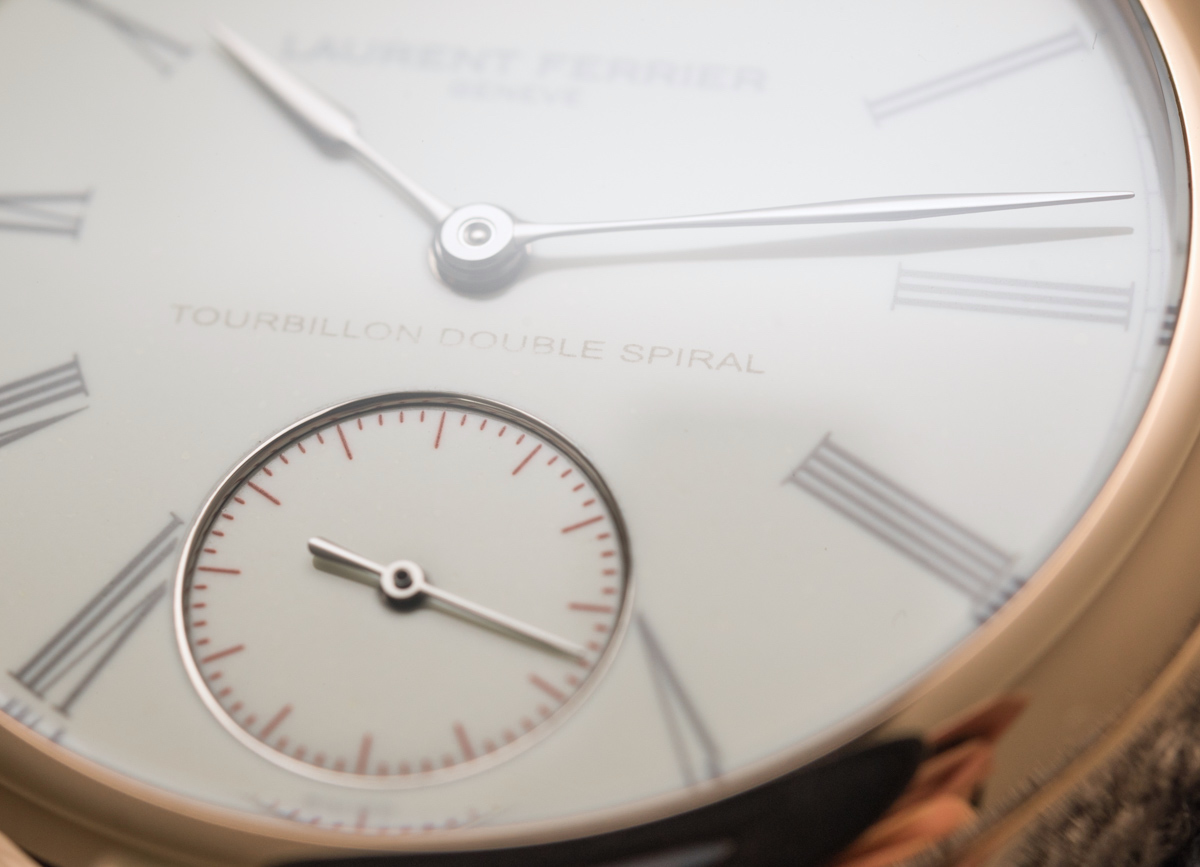 In essence, all this was to say that the Laurent Ferrier Galet Classic Tourbillon Double Spiral, despite its one-percenter price, very clearly solid gold case, and complex movement inside of it, remained totally or at least largely unrecognized. It is the sort of watch that gets a lot of attention from those who know, and little to nothing at all, from those who don’t – and the latter are exactly those you may not want knowing anyway. 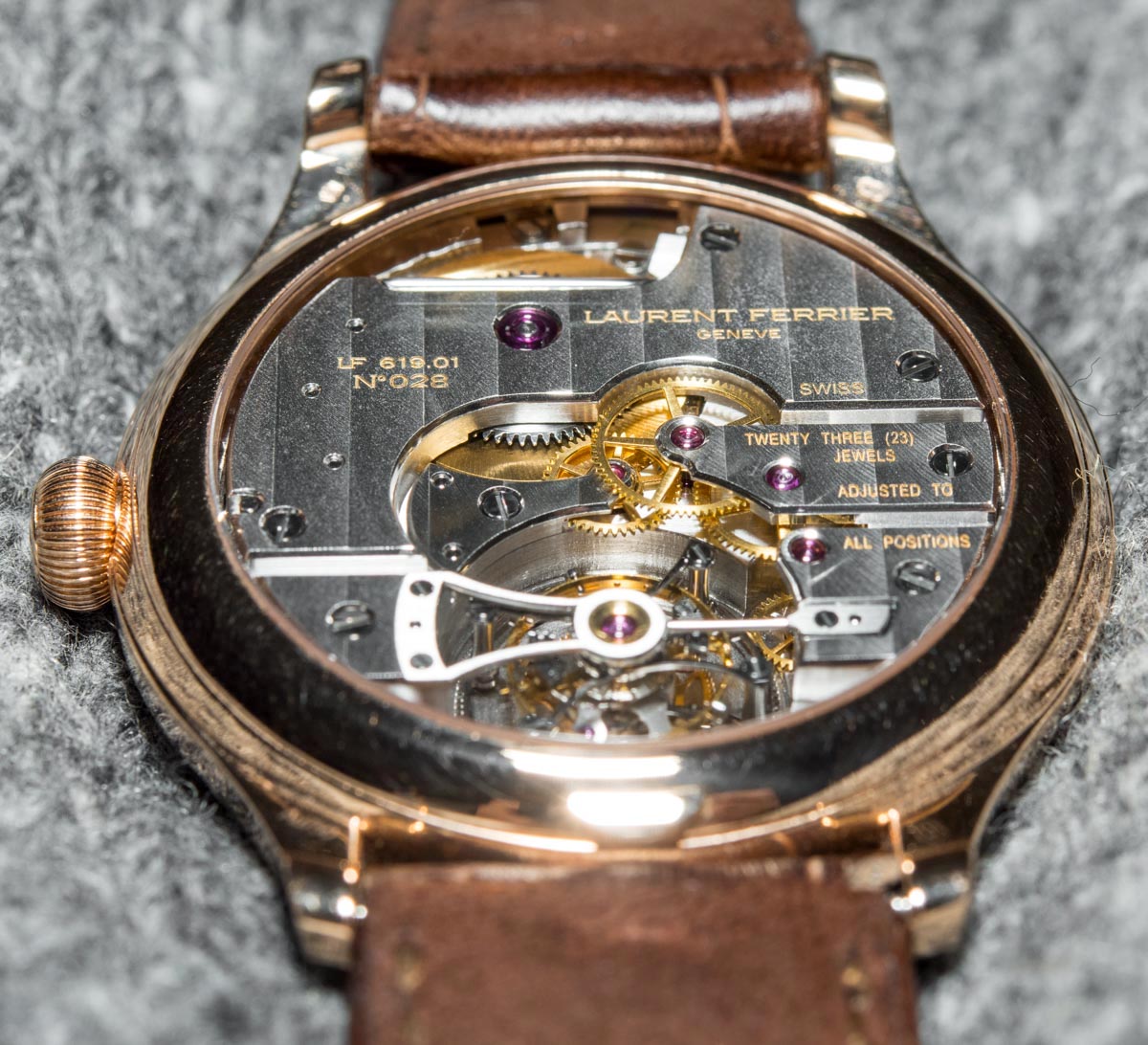 At a time when status symbols and instantly recognizable octagonal designs may seem to be the be-all and end-all of luxury, it is genuinely refreshing to see – and especially to wear – something that goes against all of that and it is also what explains the successful growth this young brand has experienced in such a short time. Last but not least, there is an amusing and fun element to discovering just how fine and expensive a timepiece one can wear with none but “those in the know” …knowing. 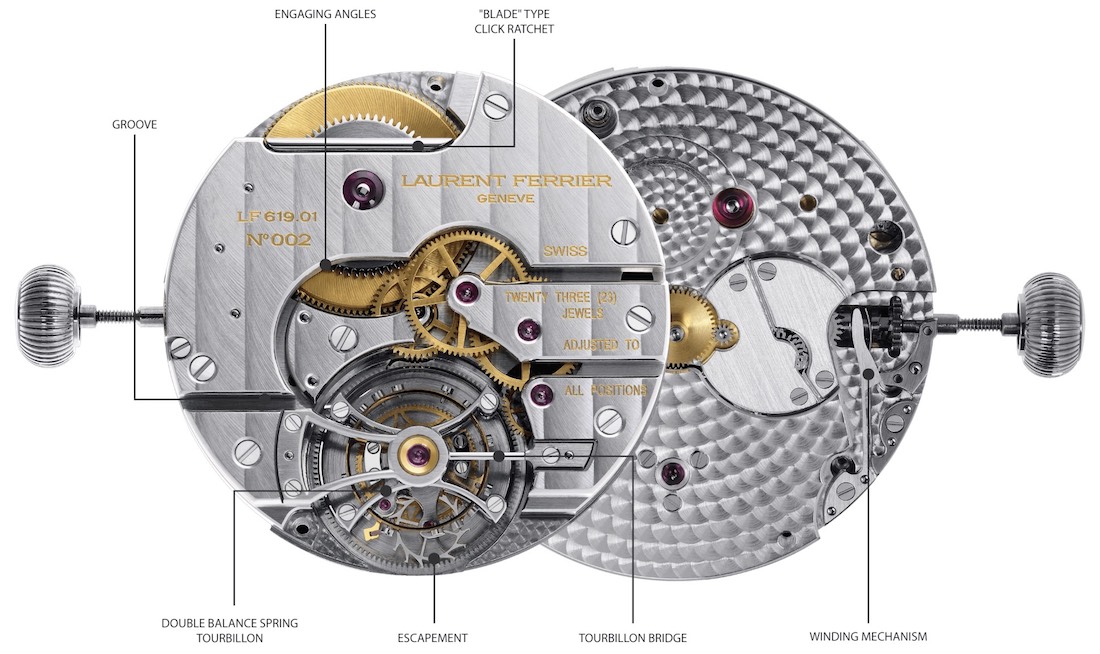 Enough with psychology already, let’s see what makes the Laurent Ferrier Galet Classic Tourbillon Double Spiral stand out for us true watch enthusiasts: its hand-wound tourbillon caliber. A little-known fact is that this movement was developed by La Fabrique du Temps (partly run by previous BNB Concept people) and Laurent Ferrier. The LF619.01 movement is 31.60mm wide and 5.57mm thick, runs at 3Hz for 80 hours, and is composed of 188 parts and 23 jewels. Features include hours, minutes, and seconds… 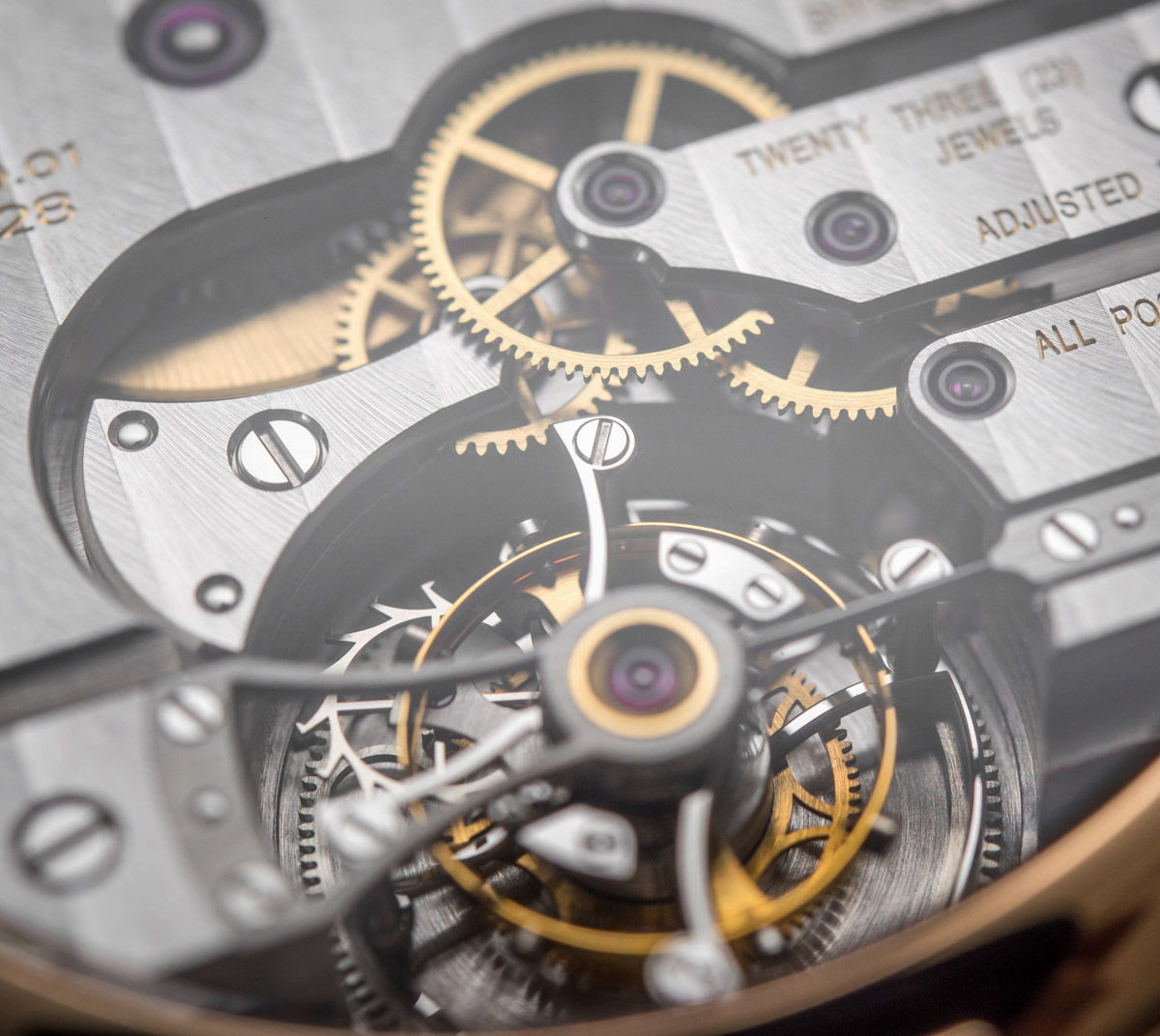 …Until you turn it around, as the main feature is arguably the beauty of the construction and execution of the caliber. It is difficult to tell what is more memorable: the quality of execution, the construction of the movement, or the novelty of the double spiral tourbillon. Here’s how things break down.

The most noticeable thing is the contrast between a perfectly round movement, that is as traditional a shape as it gets, and the very novel layout of the bridges and wheels. A play of circles in the golden ratio and well-defined, characterful straight lines disguise what actually is a very straightforward way of delivering drive from the mainspring on the top through a few stacked wheels to the tourbillon at the bottom. 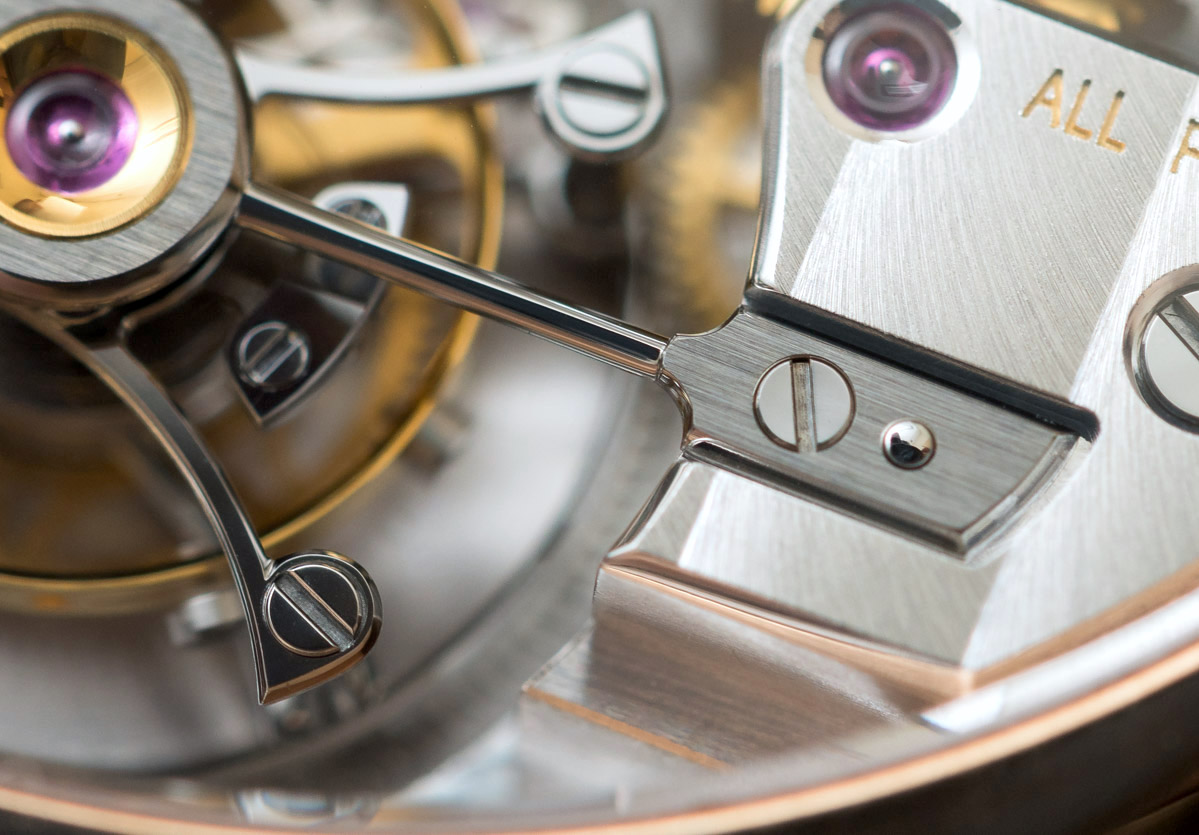 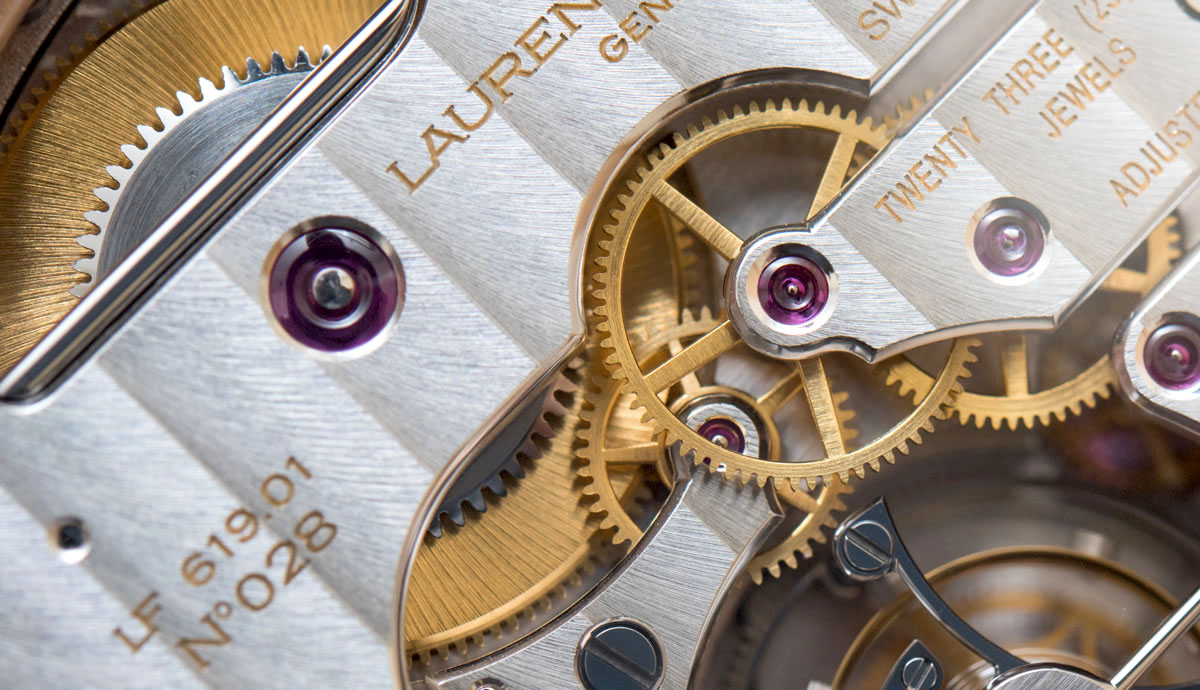 Angled and polished edges on bridges and countersinks are a given, and so are the black mirror-polished top surfaces of screws as well as the tourbillon cage and the bridge that holds it secure. The only element I was left wishing for was the beveled and polished edges on the spokes of the gear train wheels – as difficult to do as it may be, the absolute majority of “haute horlogerie” timepieces miss it, so this criticism applies to not just the LF619 but very nearly all watches in this price segment.