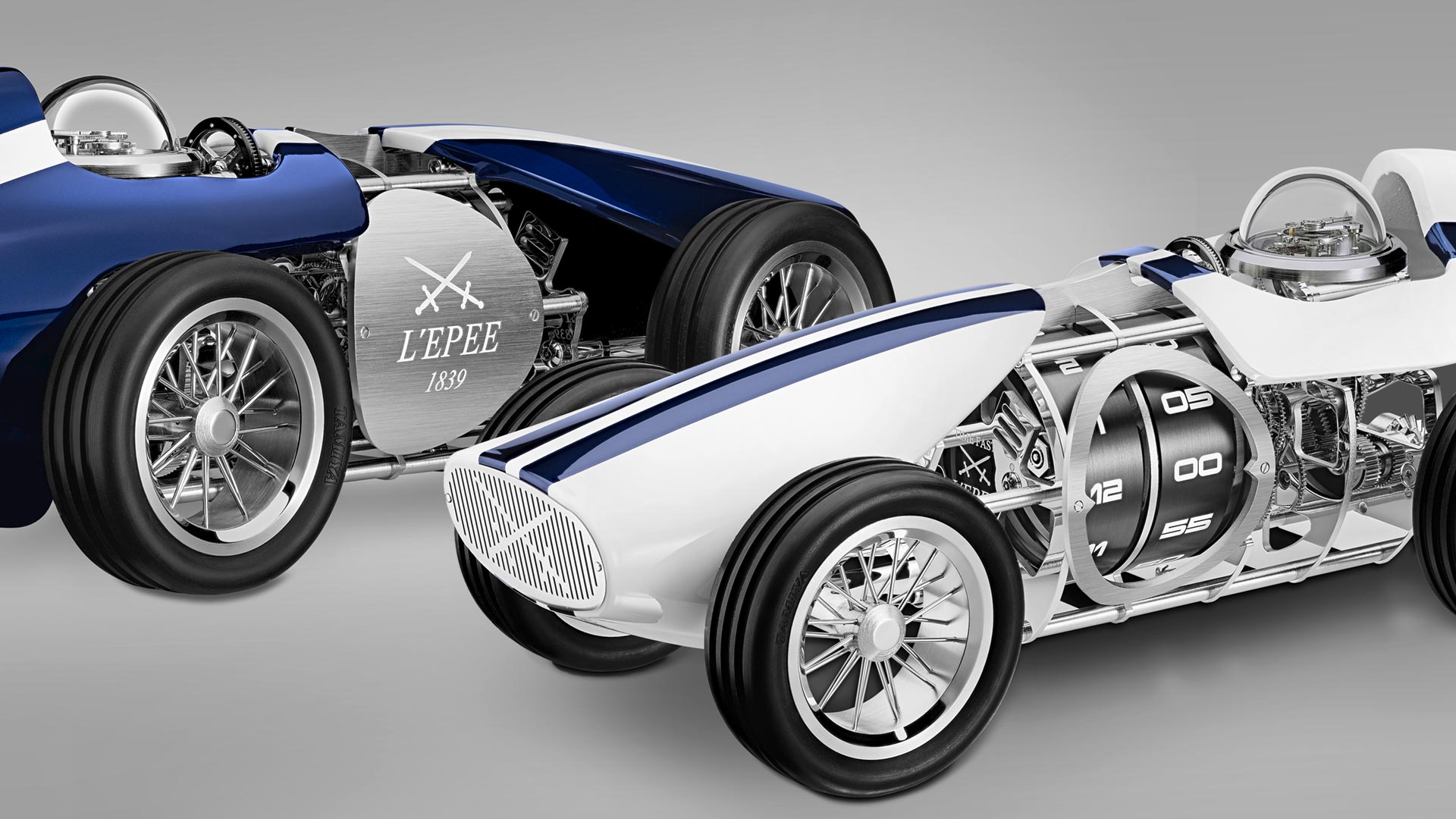 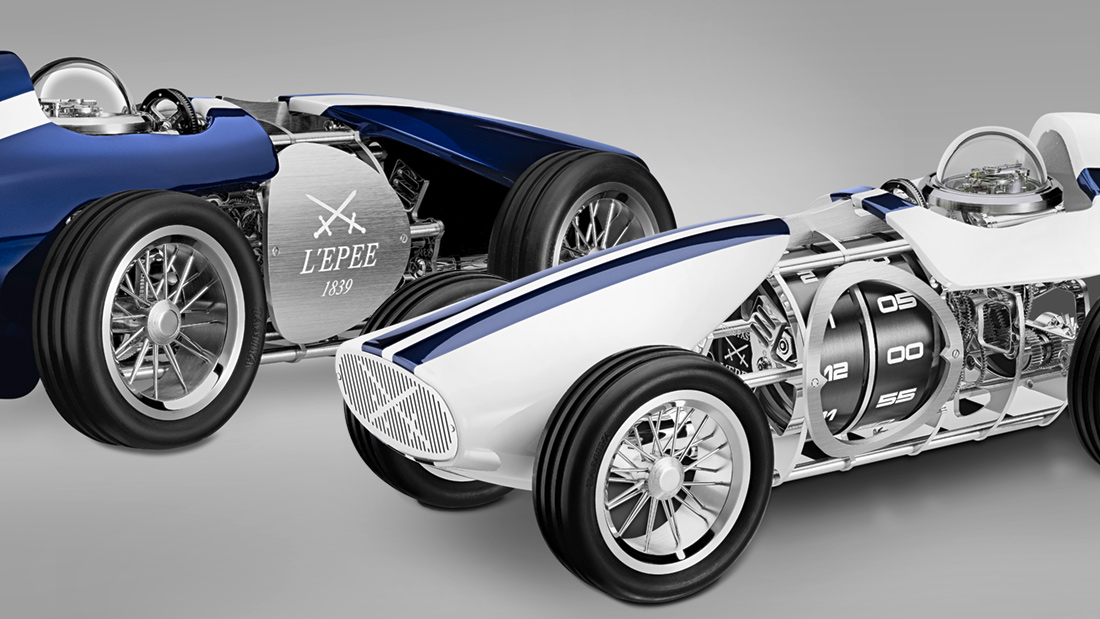 Swiss clockmaker L’Epée is probably best known among watch enthusiasts for its epic and often out-there haute horology collaborations with avant-garde watch brand MB&F. The new L’Epée Time Fast D8 clock is, in fact, the first creation from L’Epée we have discussed without MB&F attached to it. Once again it is a collaboration piece, but this time between L’Epée and the Swiss school Ecole cantonale d’art de Lausanne (ECAL) and designed by one of its students. The result is a horological interpretation of a 1950s race car, full of the clever integration of features L’Epée has always found a way to implement in its “kinetic sculptures.” 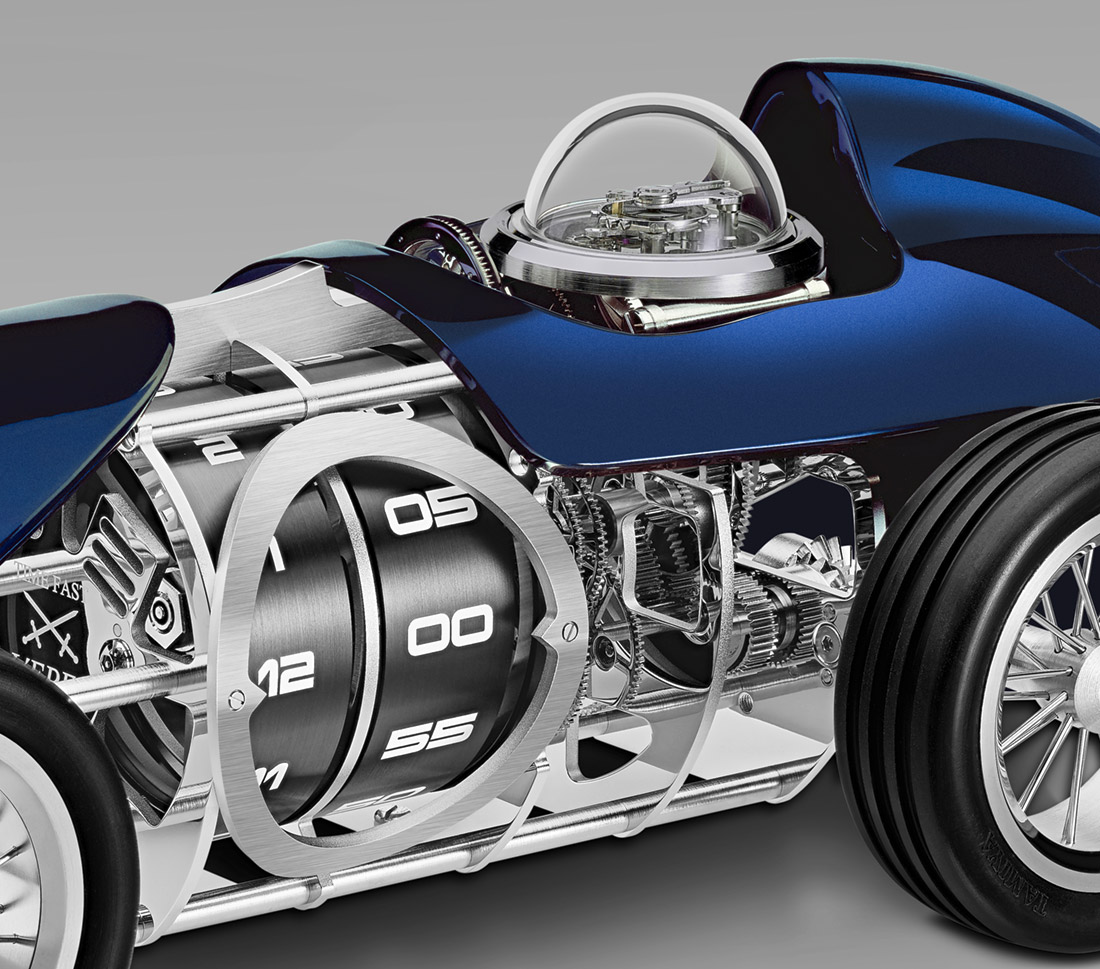 L’Epée was founded in 1839, as their branding prominently reminds you, and they claim to be the only remaining Swiss company specializing in high-end mechanical clocks. As something meant to sit on a desk instead of a wrist as well as being priced for the one percent, clocks such as this are automatically outside of mainstream appeal, but there is a lot for fans of mechanical watches to appreciate here. L’Epée regularly collaborates with watchmakers, including MB&F and Fiona Kruger, as well as producing more traditional and modern clocks – it is definitely worth checking out their website (linked to below) and their wide range of interesting projects. The L’Epée Time Fast D8’s designer is named as Georg Foster, a master’s student at ECAL, and the clock is entirely built by L’Epée. 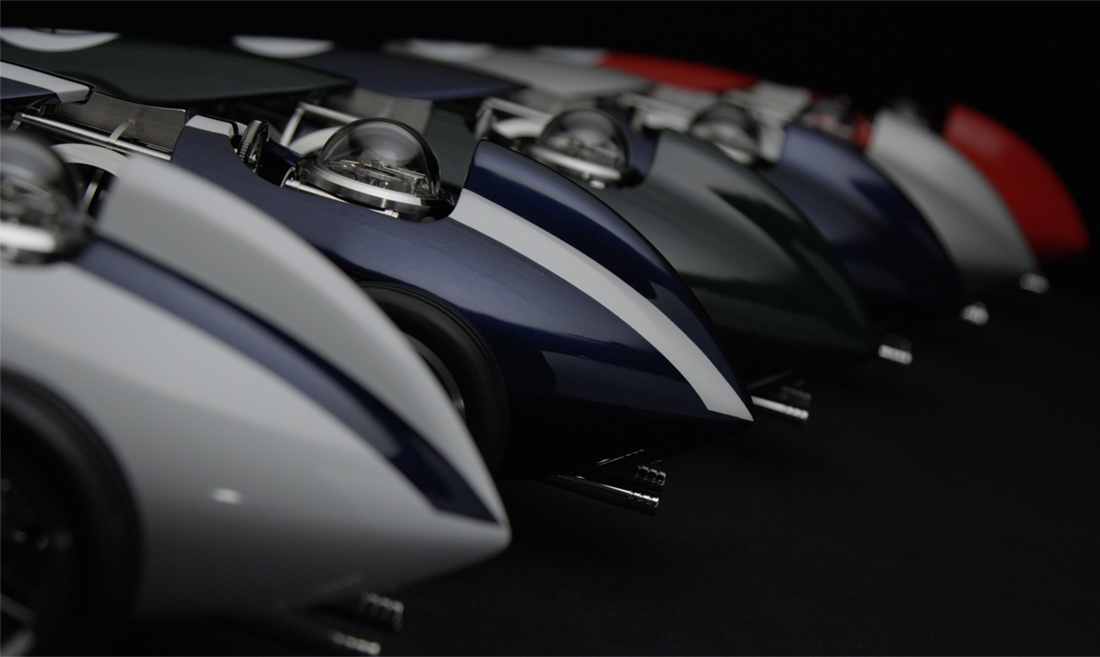 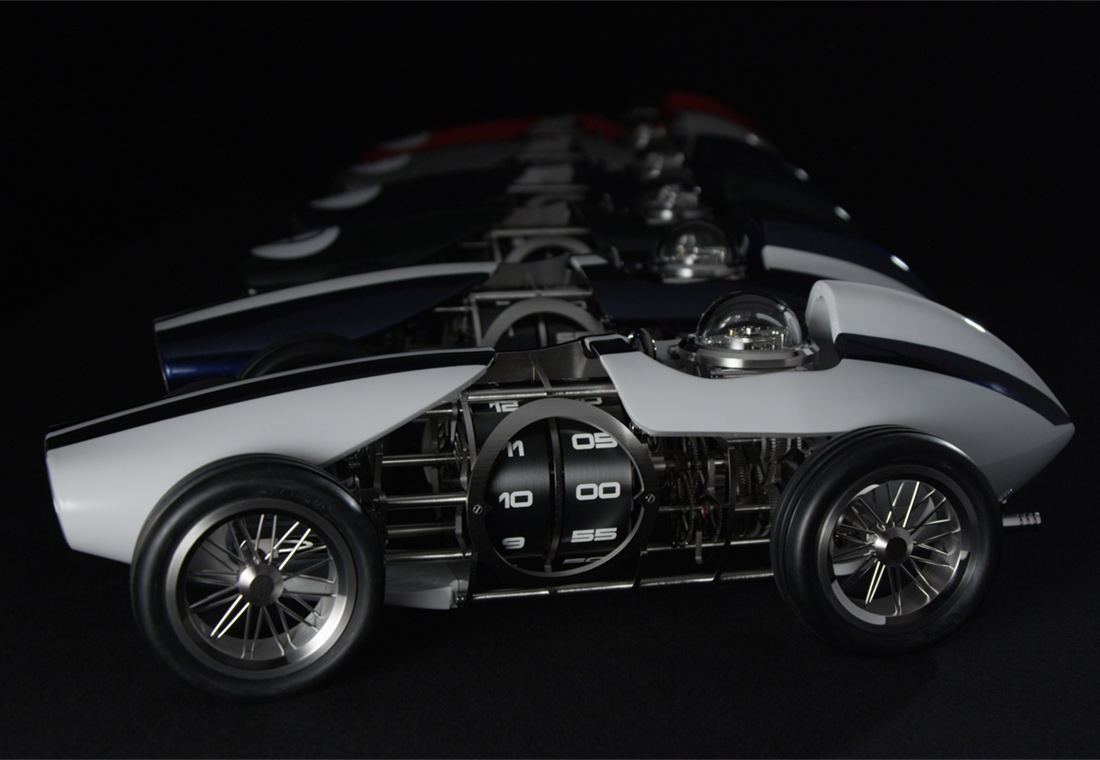 The L’Epée Time Fast D8, of course, takes the form of a vintage race car – the kind from the 1950s or so that look quite unlike most modern race cars (though it does remind me of Bell & Ross’ Bellytanker) and must have been incredibly dangerous. I do not believe it is based on a specific car, but rather features general traits of various race cars from that era, reinterpreted (by all means, correct me in the comments). I don’t know much about cars, but this evokes for me a vague memory of a similarly shaped toy car made of wood from my childhood. And a luxury toy this most certainly is meant to be, as much as it is a desk clock or mechanical art. In a reference to children’s toy windup cars, rolling the Time Fast backwards winds the clock’s mainspring via the rear wheels – and, thankfully, will not propel it forward. Fully wound, the L’Epée Time Fast D8 has a power reserve of 192 hours, or eight days. 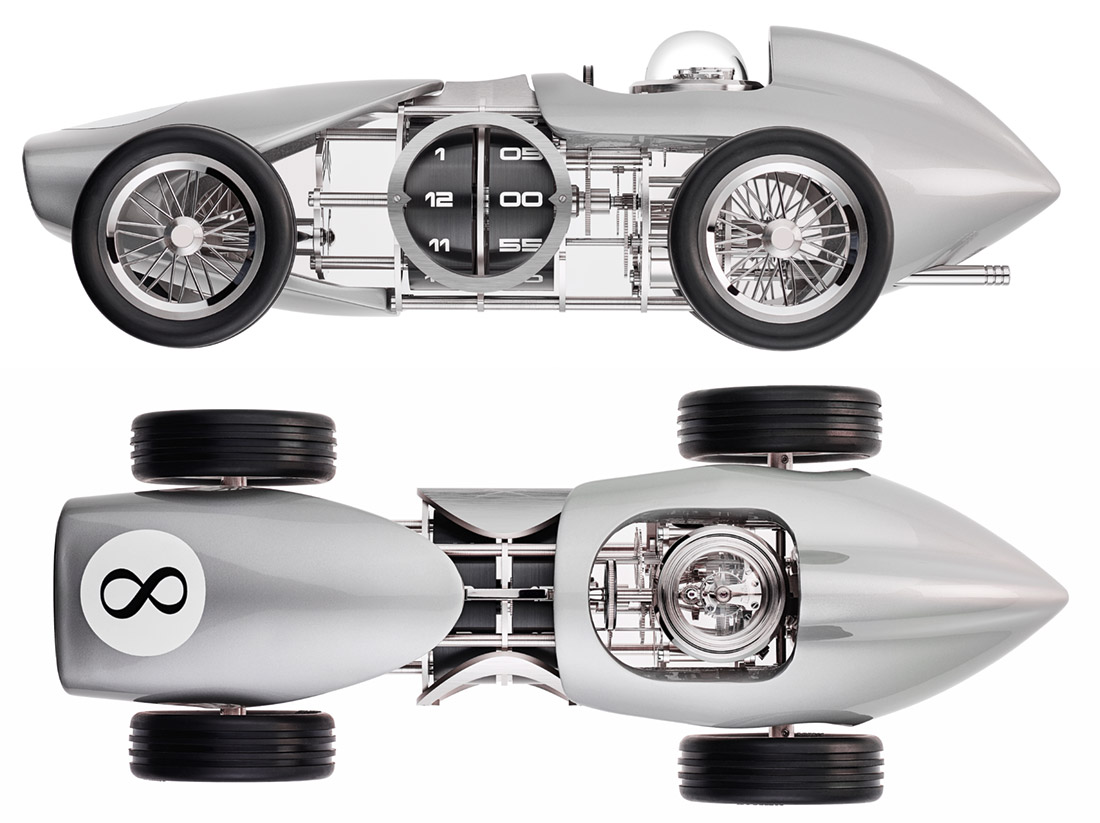 One can also freely roll the car forwards, presumably while making vroom-vroom noises, without the movement being engaged in any way. So rolling it back and forth is how it is charged, and this actually forces you to “play with” it. Just make sure the desk you keep it on is level – as a matter of fact, it seems that L’Epée could have incorporated some sort of “hand brake” or something, but there is no mention of anything to keep it from potentially moving around unwantedly. The method of winding is one cool way that L’Epée integrated the clock’s functional elements into the car motif. Similarly, turning the “steering wheel” counterclockwise sets the time, while clockwise does nothing and allows you to position it however you find attractive. 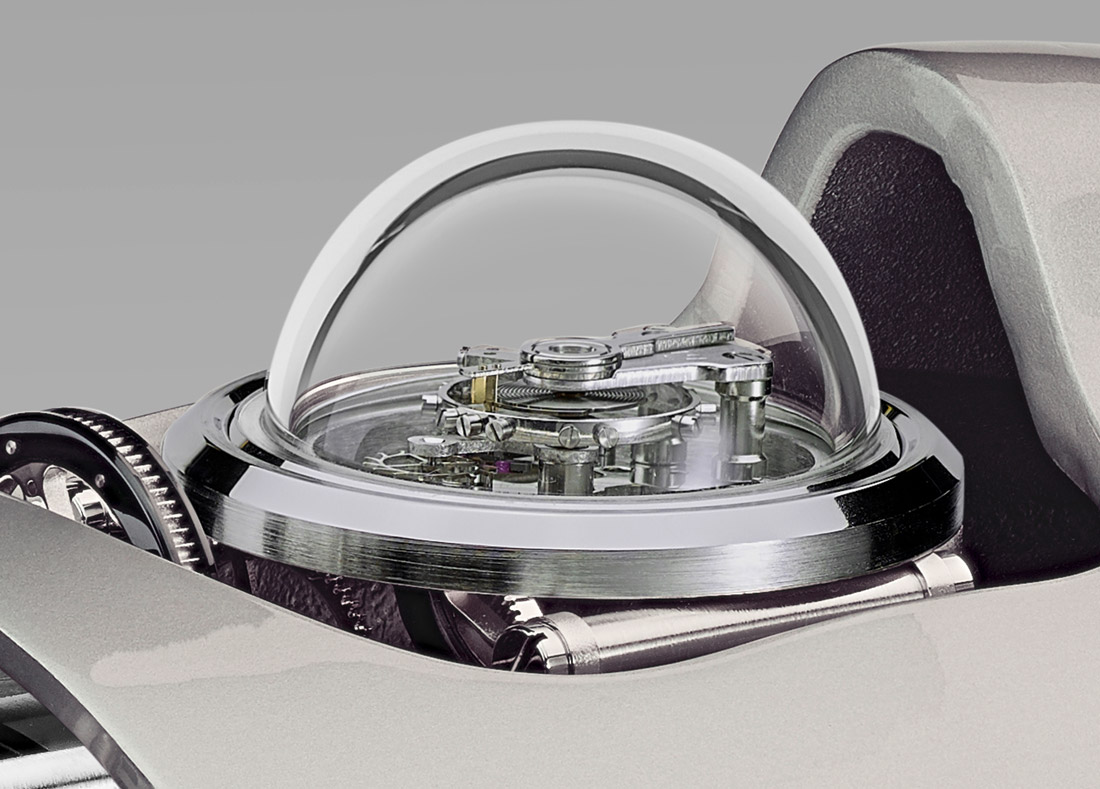 In the cockpit sits the escapement covered by a blown glass dome that can be seen as a reference to the driver’s helmet. The escapement under a similar glass dome features on many L’Epée creations (MB&F too) as a design focal point, being the most animated part of the movement. The L’Epée Time Fast D8 movement operates at a slow 2.5Hz, which is a speed that is better for visually appreciating its hypnotic motion and details than, say, the whirring 4Hz we are used to seeing in many modern wristwatches. 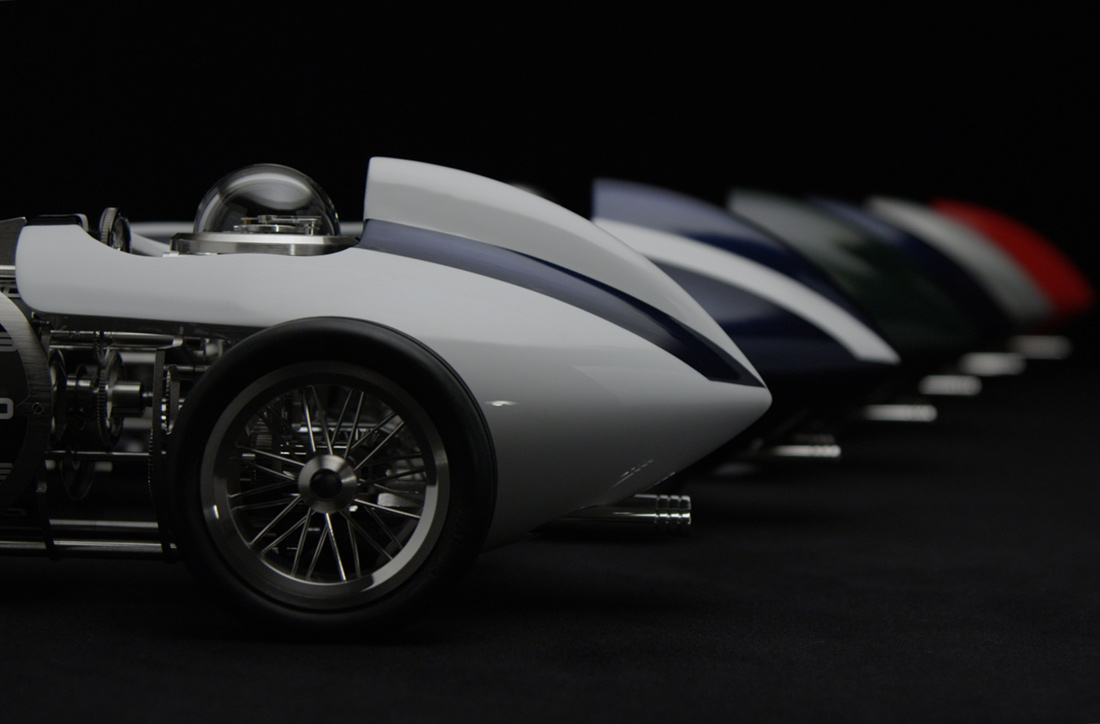 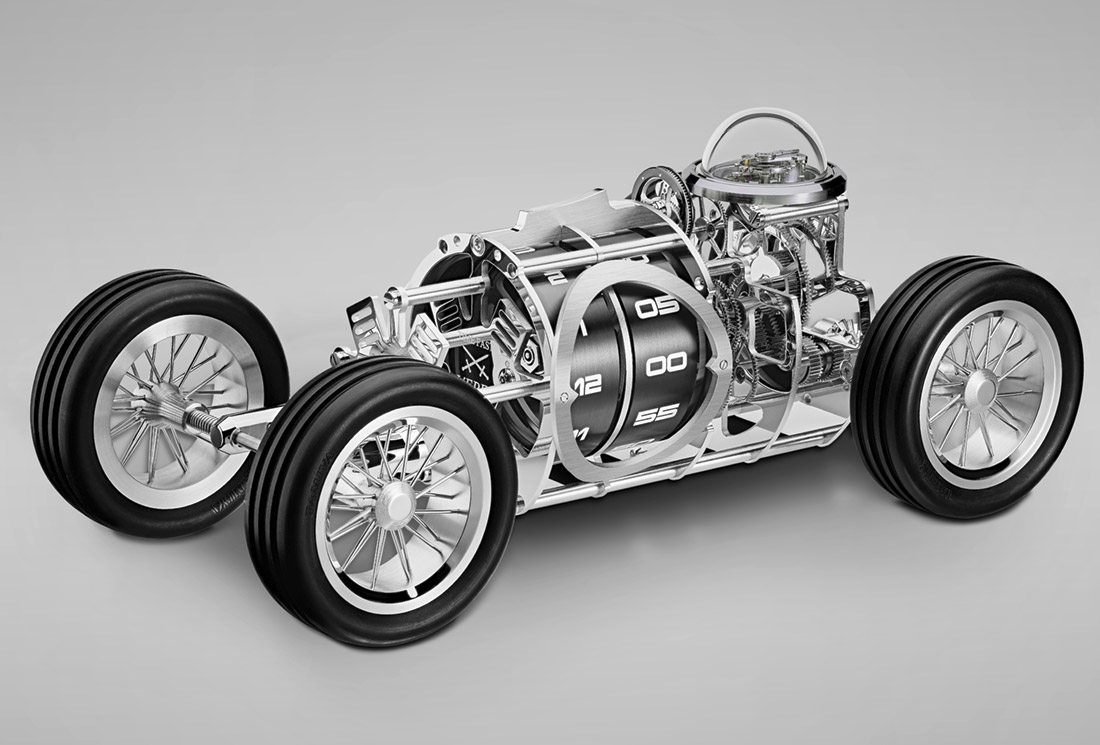 The in-house L’Epée movement is dubbed 1855 MHD and comprises 289 components, each of which the brand says is individually finished “with the greatest care.” Only the crystals, jewels, and raw aluminum casting are sourced, and every other piece of the L’Epée Time Fast D8 has “passed through the hands of the twenty or so experts within the L’Epée 1839 workshops.” Much of the movement is exposed not only to the eye, but to the air. As with other L’Epée clocks, this makes me wonder about how dust and moisture in the atmosphere will affect it over time – it seems like glass casing would have been appropriate for the portions of the movement meant to be displayed. Perhaps a glass cover for the whole thing will do the trick. 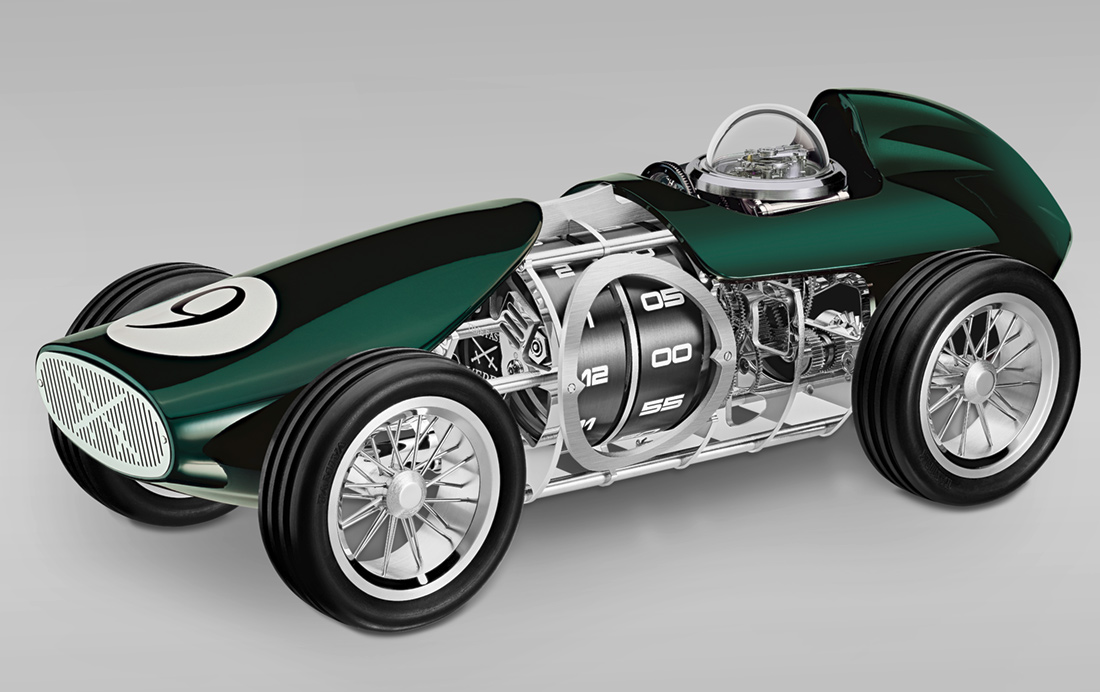 One will grasp the L’Epée Time Fast D8’s aluminum body with all fingers to roll it around the desk, as it measures a solid 38cm long, 16cm wide, and 12cm high, with a weight of 4.7kg. The five available color variations are achieved with automative paints and lacquers. Obviously, but almost easy to forget, time is displayed digitally on the side of the car on steel bands engraved with sporty Arabic numerals. The other side of the body features a plate that comes standard with the L’Epée logo but is also meant for customizing options. Only 100 examples of the L’Epée Time Fast D8 will be produced in each of the colorways with individual prices of 27,500 CHF for any version. Learn more at lepee1839.ch