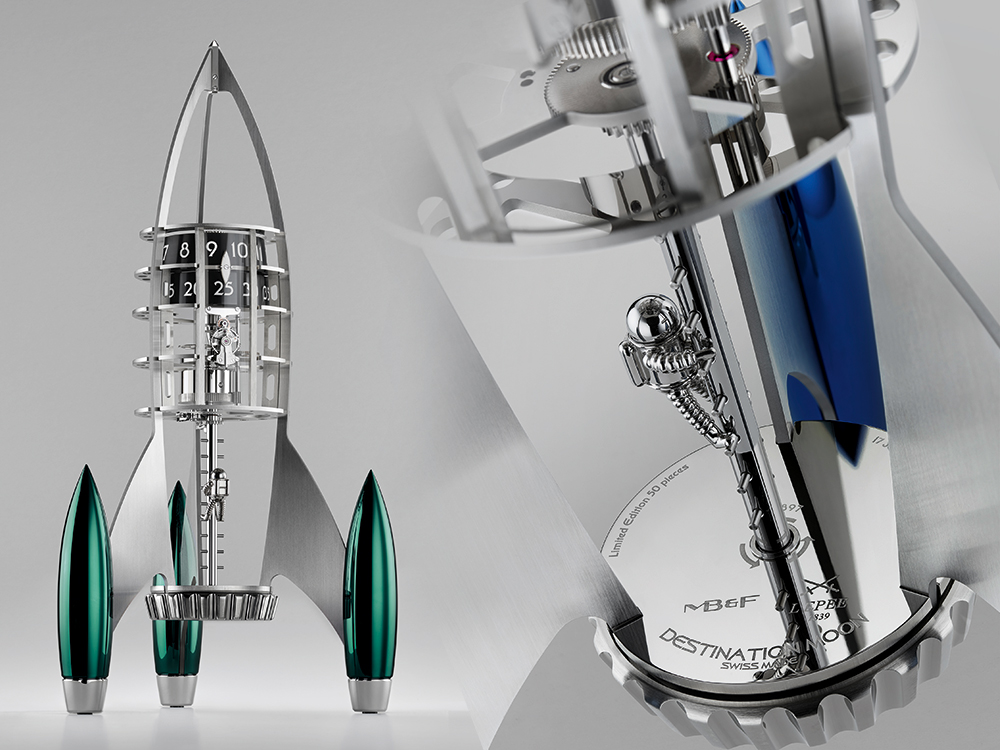 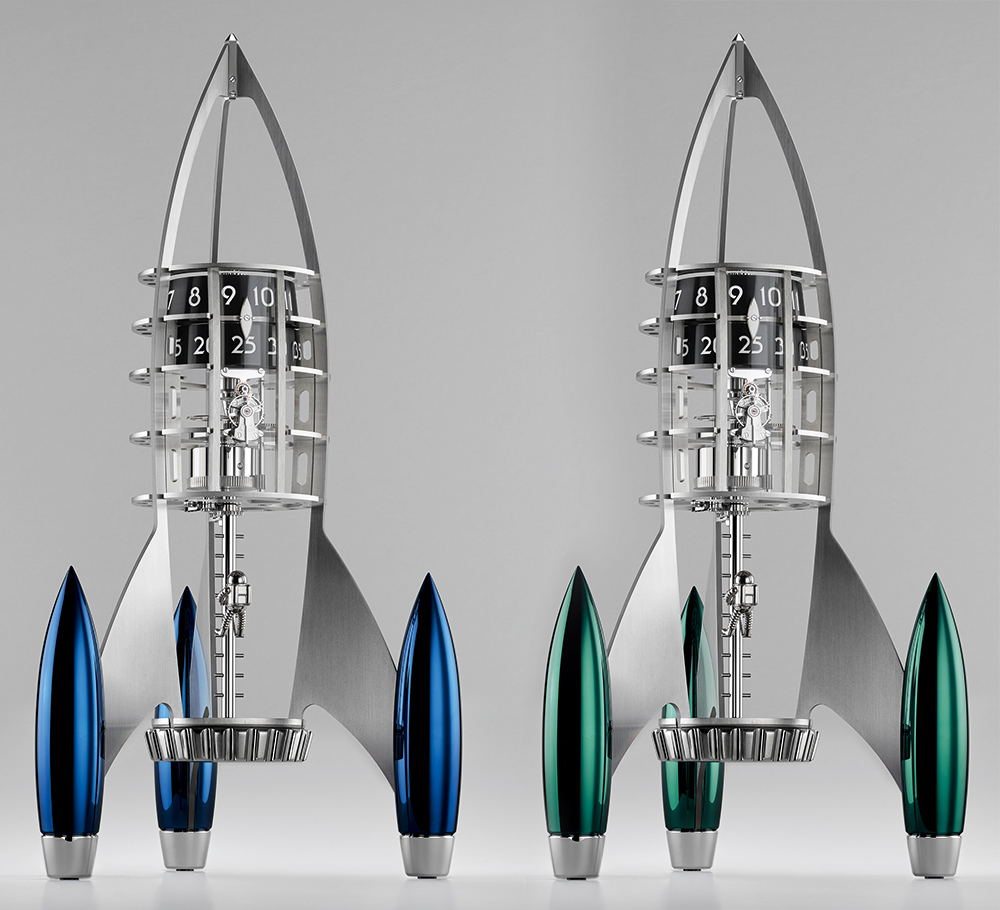 The quirky collaborations between Swiss watchmaker MB&F and Swiss clock-maker L’Epée have a unique identity that is equal parts outrageous, childlike awe-inducing, and sometimes head-scratchingly confusing. Whether it’s a nightmare-inducing mechanical arachnid or a whimsical yet seemingly war-ready robot buddy, these projects have explored some, let’s say, “creative” concepts in the way of tabletop clocks, and the MB&F Destination Moon Clock By L’Epée is no different. Inspired by the early, sci-fi rocket designs of the 1960s, the MB&F Destination Moon Clock (which would look right at home next to their Astrograph pen) conjures up childhood memories fueled by hopes of early space exploration and ultimately, cool toys that make you feel like a kid again – a very rich kid, as this clock costs around $20,000. 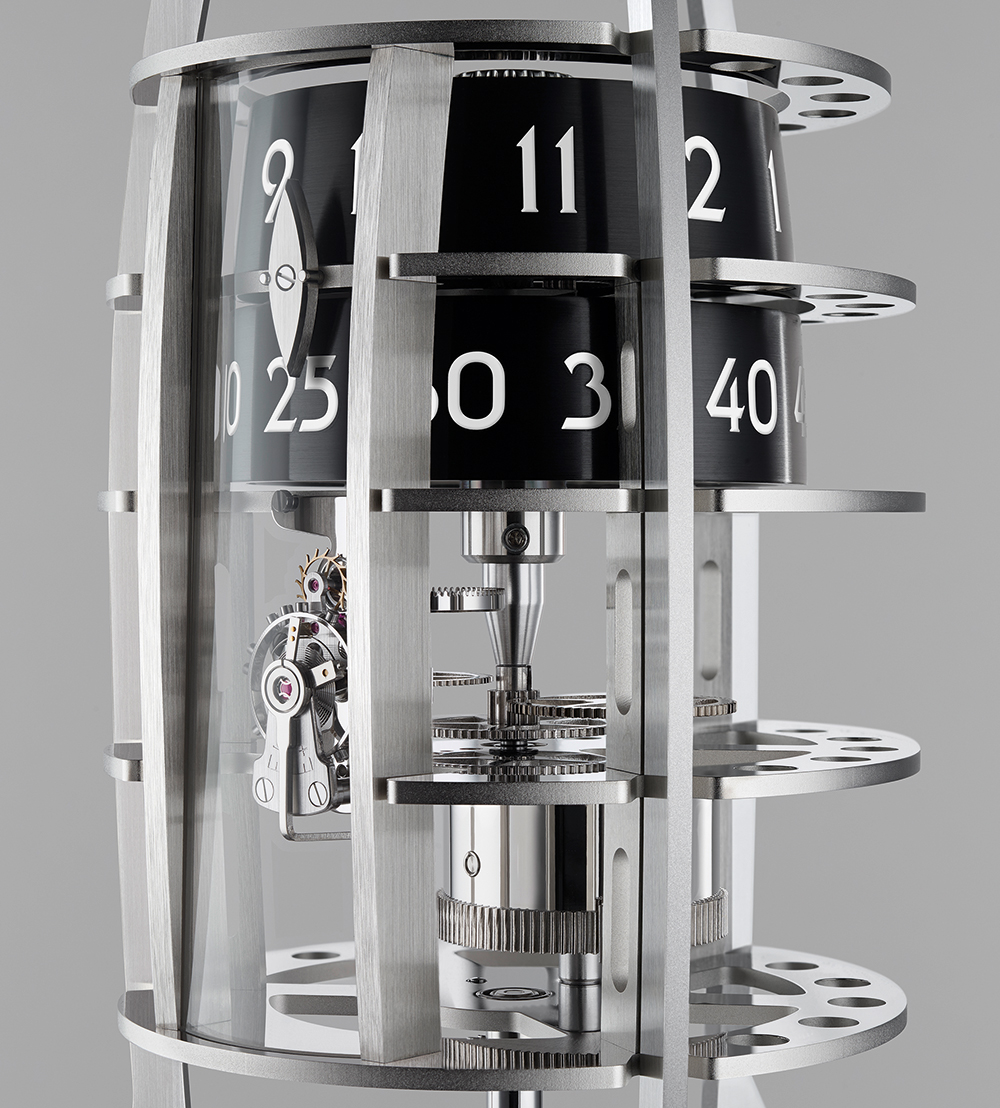 To give the MB&F Destination Moon its distinctive look, MB&F worked with sci-fi rocket fan Nicolas Bringuet and MB&F intern-designer Stefano Panterotto to create the basic concept. After removing the side panels or what can be considered the rocket’s “skin,” a look was achieved that gives a clear view of the movement’s vertical architecture. This isn’t the first time MB&F has utilized this approach and we saw a similar concentric, vertical design concept used in the MB&F HM7 Aquapod Tourbillon Diving-Style watch covered at SIHH earlier this year. 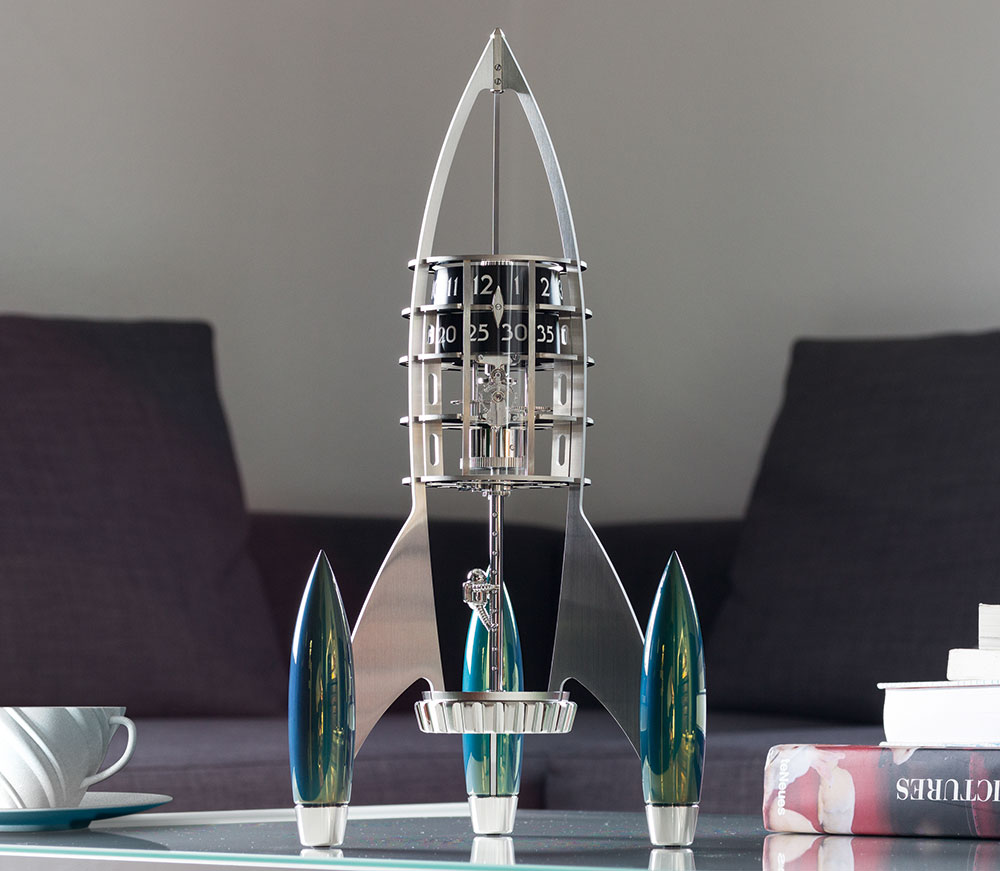 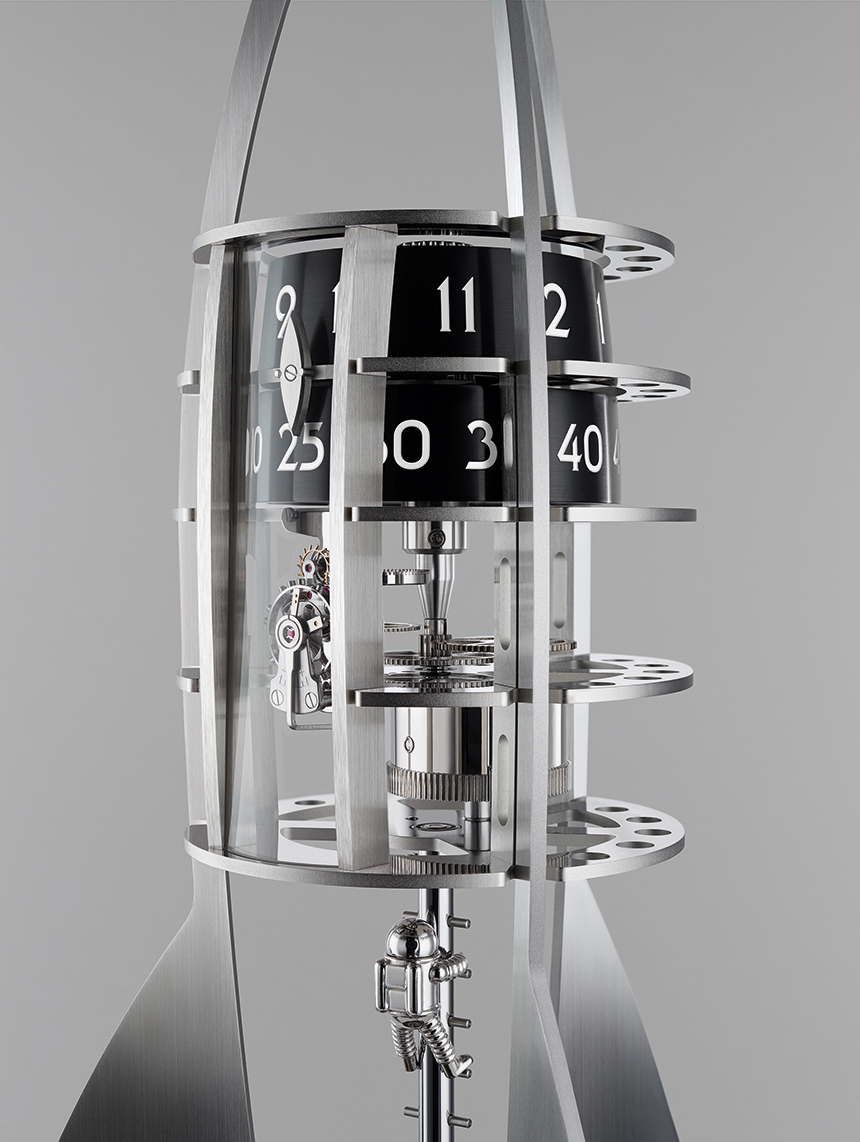 The movement itself was designed and manufactured in-house by L’Epée from a total of 164 components. It’s operated by winding the massive crown that serves as the rocket’s propulsion wheel which also turns the escape ladder to charge the mainspring. Additionally, MB&F proudly displays the regulator which is also housed in protective mineral glass. Moving from the base to its top, we find the two large stainless steel discs with stamped white numerals that indicate the time by aligning with a double-ended pointer above the regulator. 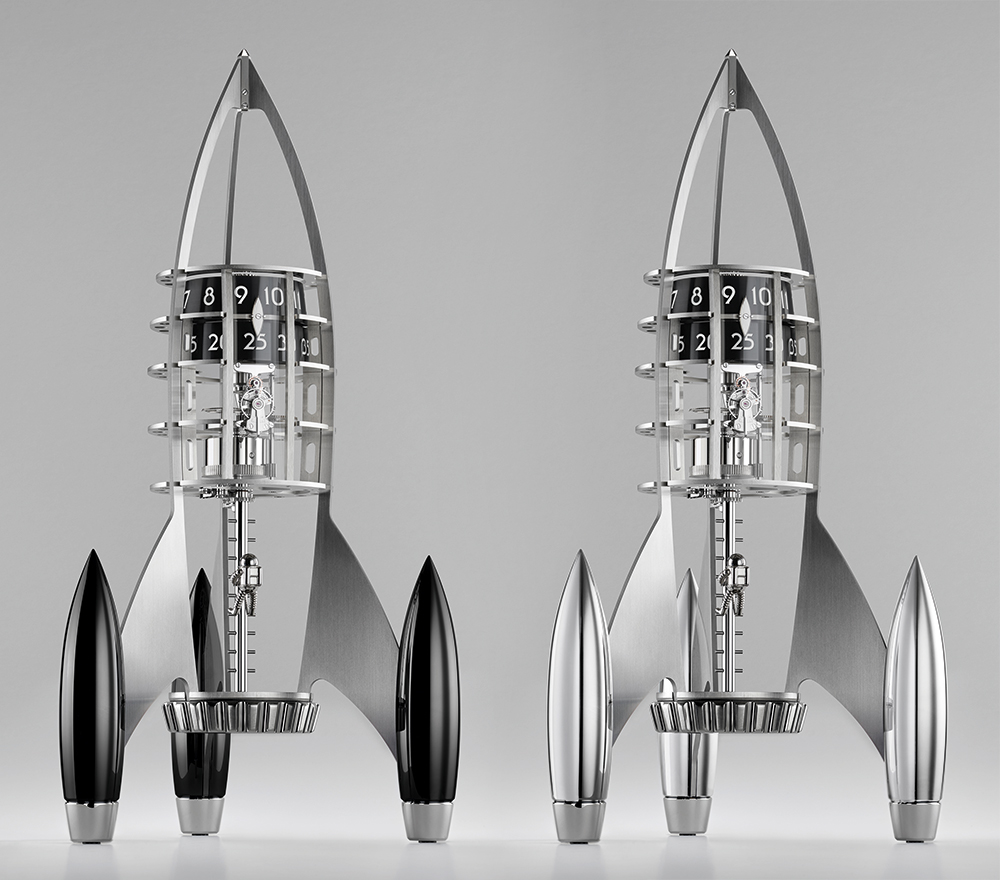 It’s also worth noting that the time itself is set by using a single knob that sits above the indication rings. Power reserve is eight days on a single barrel, and aside from its vertical architecture, the movement has been finished with a variety of polished, bead-blasted, and satin surfaces. All of this is housed in a hefty satin-finished stainless steel frame that stands 41.4cm tall and weighs in at around 4kg. Further support is provided by three palladium-plated brass landing pods that also feature PVD coating on the green, blue, or black editions. One wouldn’t want to see it topple over, after all, considering that this desk clock probably costs more than many watch collections. 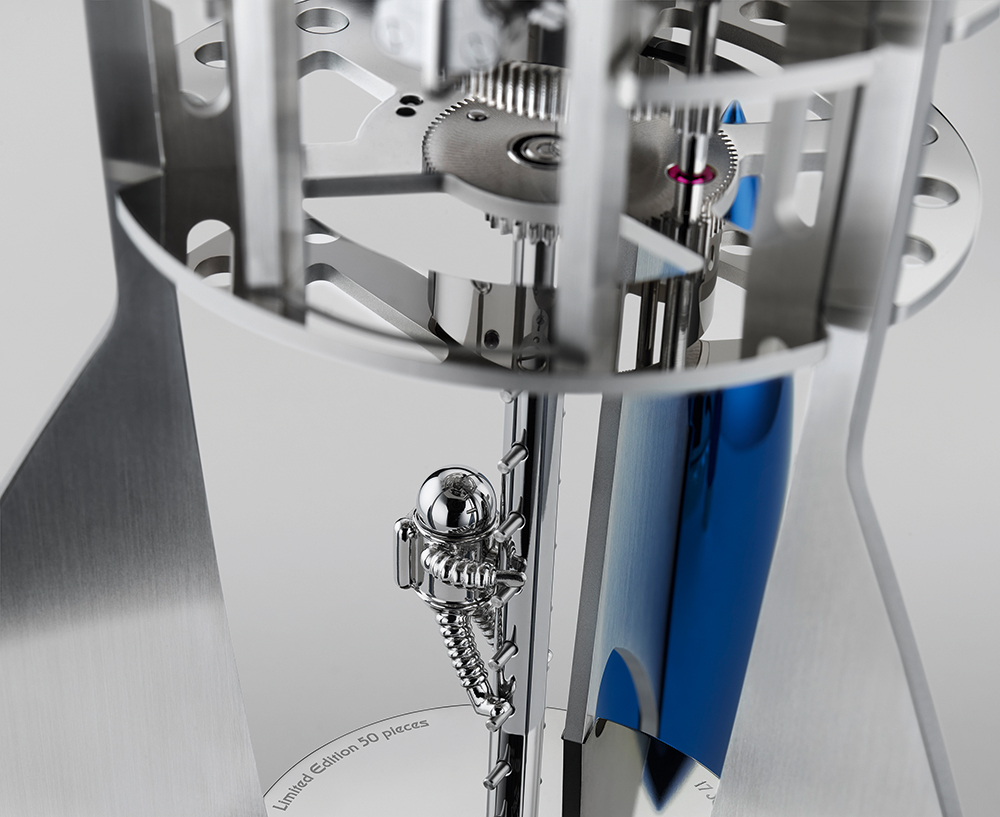 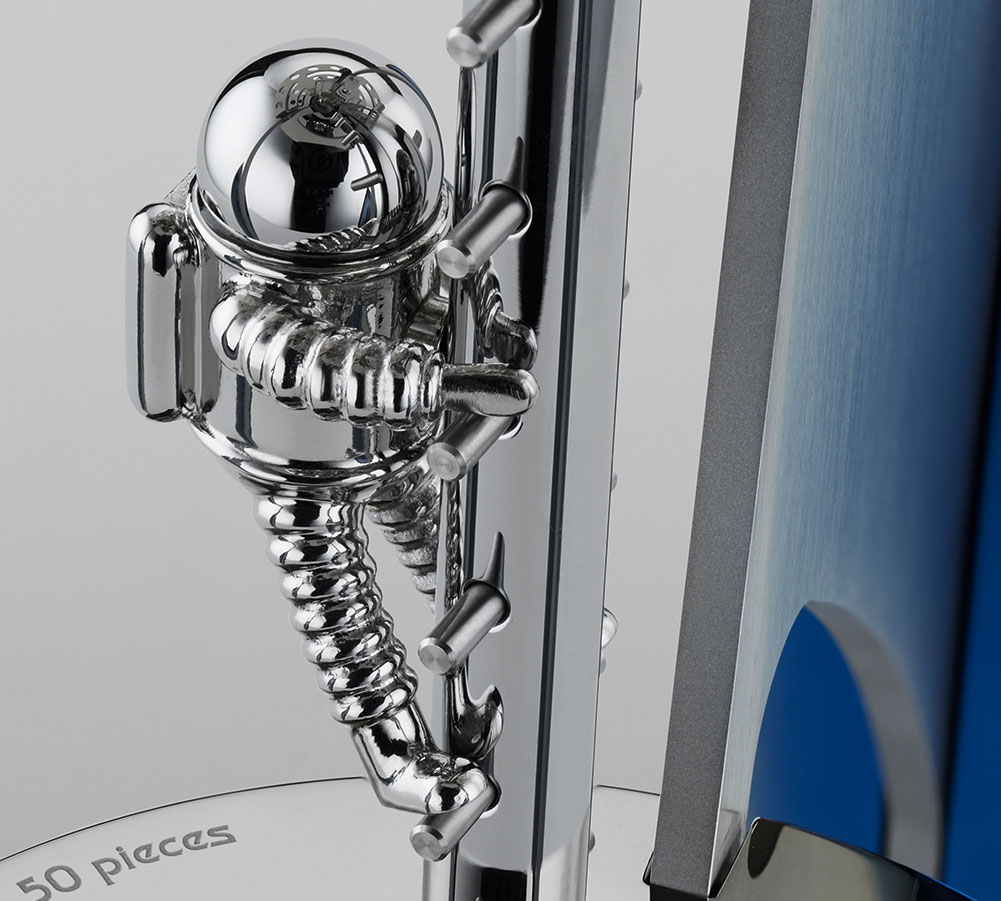 Even with all the effort that went into the MB&F Destination Moon’s technical design, I have to say that my favorite touch is the clock’s resident rocket man affectionately named “Neil.” He can be magnetically fixed to any point on the boarding ladder, and it’s up to you to decide if he’s disembarking or preparing to take flight into the unknown. One thing that is for sure is that his ’60s sci-fi-styled space suit ties perfectly into the MB&F Destination Moon’s overall design. It’s all part of the human element MB&F sought to incorporate here while stirring up your imagination.

This might be my favorite MB&F/L’Epée collaboration yet, and I can see it standing proudly on the desks and mantels of the lucky few. Like previous MB&F machines, it doesn’t come cheap and carries a price of 19,900 CHF + VAT. Additionally, there’s a choice between the four limited editions of 50 pieces available in black, green, blue, or palladium. mbandf.com