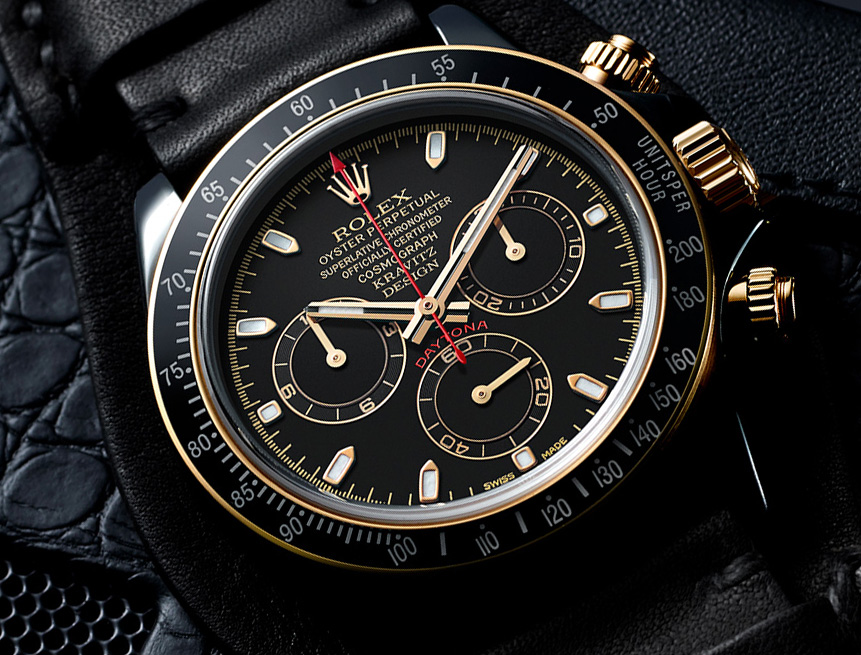 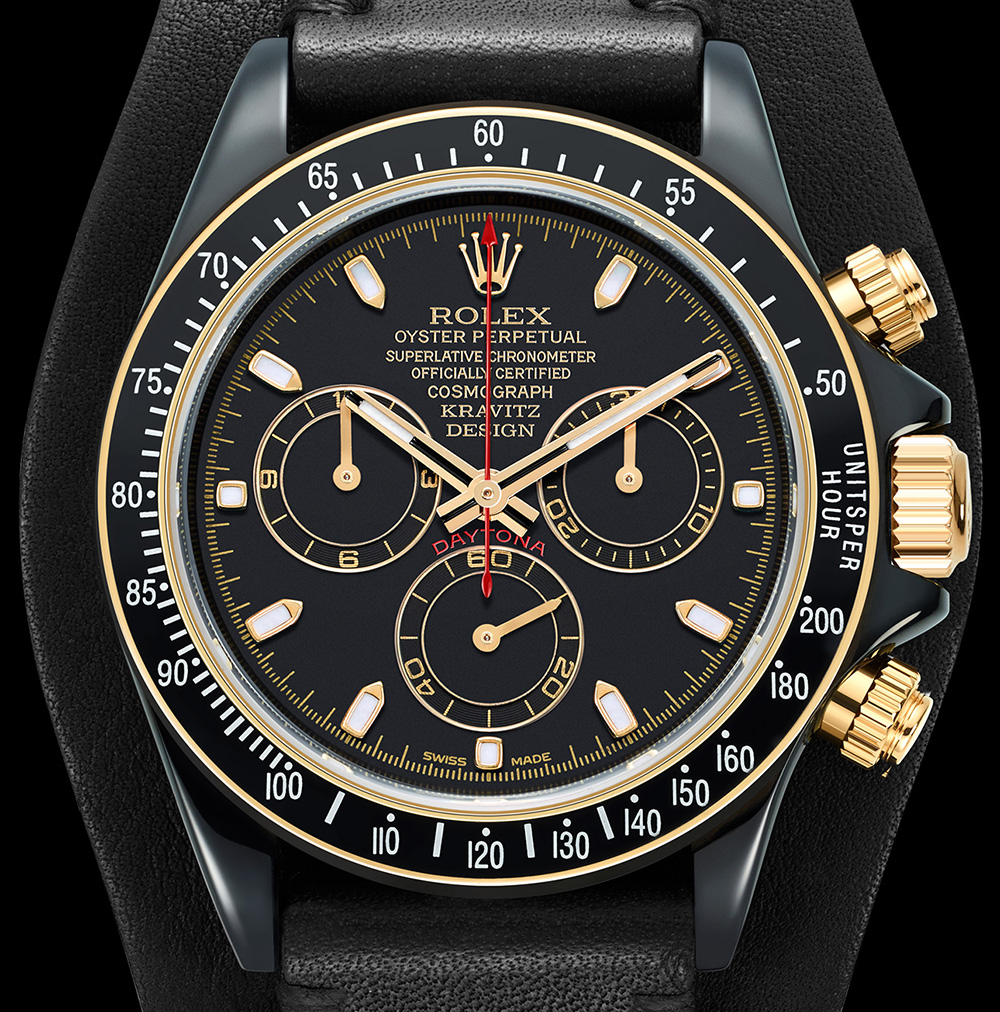 In an aBlogtoWatch exclusive, we present to you the new Kravitz Design X Les Artisans de Genève LK 01 watch, a reimagined and modified Rolex Daytona Ref. 116523, aka the two-tone gold and steel Daytona. As you can likely gather from the name, it’s designed by none other than musician and watch collector Lenny Kravitz. Yes, this is a modified Rolex with a celebrity association, and it is also one that looks very cool to me.

For those not yet familiar with what Les Artisans de Genève do, they typically take an older or vintage watch (typically Rolex, and you can see our coverage of their first release, a modern tribute to the Rolex Daytona 6263 here) and tinker around with materials, colors, movement, and other aspects of the piece with varying effect on the inherent identity of the original. Here is a DLC-coated reinterpretation of the Daytona  with a military cuff leather strap rather than the classic Rolex oyster bracelet that comes in a leather case designed to recall a roadie case. What did you expect from a watch designed by the music icon seen as the epitome of badass cool? 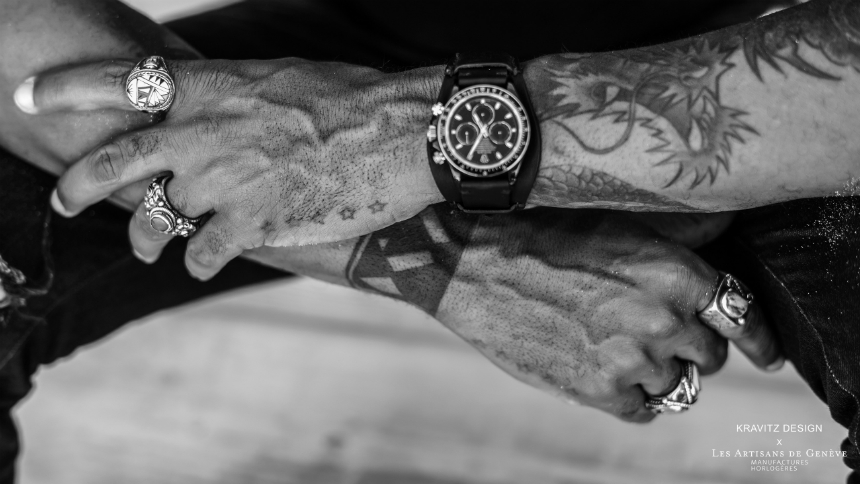 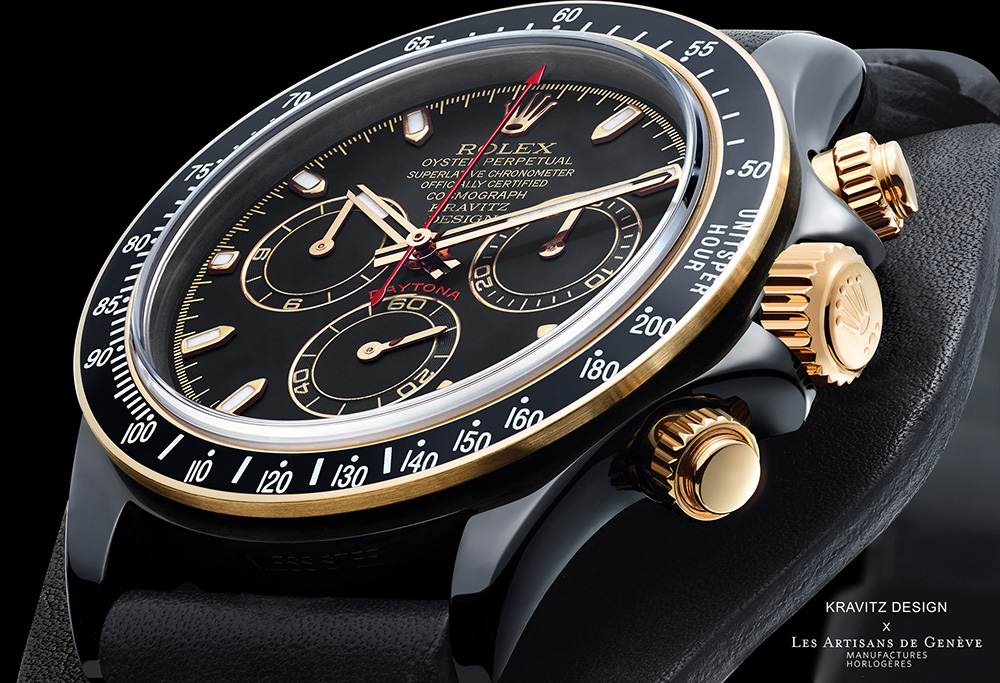 Lenny Kravitz has been a known watch collector for some time now, and though most of us know him from his music (and, more recently, acting career) he has operated his own design firm – Kravitz Design – for over 13 years now. Usually more focused on interior design, this is Kravitz’s first foray into watches and Les Artisans de Genève notes that this process was a true design collaboration with an active hand on every aspect of the process.

This reimagined Rolex Daytona reference 116523 is the previous generation Rolex Daytona that first came out in 2000. The 40mm-wide watch runs on the Rolex calibre 4130 movement that gets a 72-hour power reserve. This remains unchanged in the Les Artisans De Genève X Kravitz Design LK 01 Rolex Daytona watch, but now let’s get into exactly what is changed from the original model. 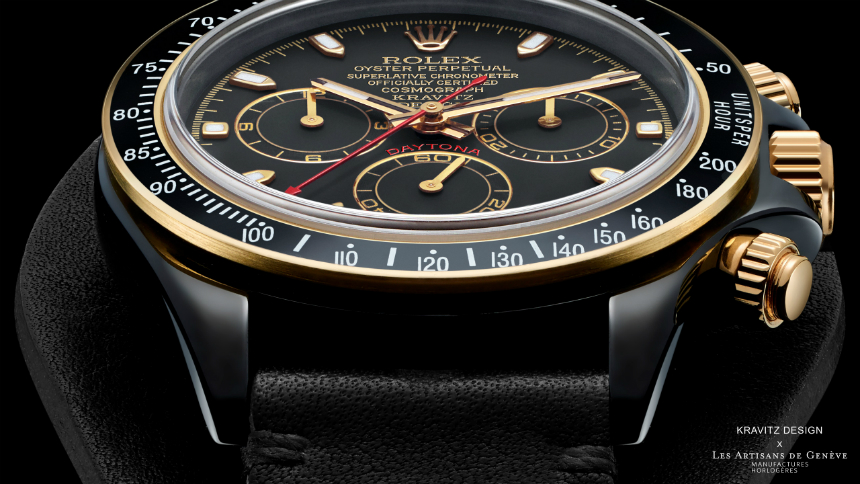 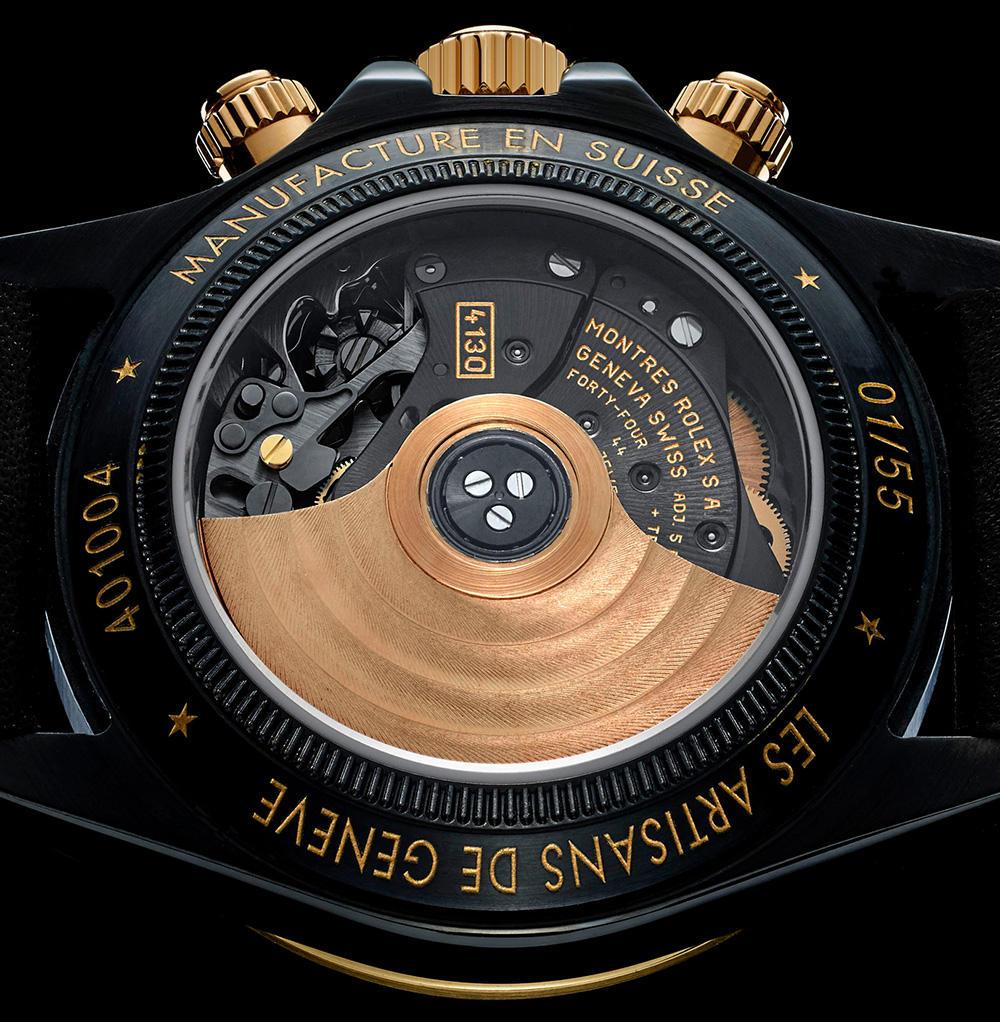 The modifications that Kravitz and  Les Artisans de Genève have made include a black DLC treatment on the case, as well as a new handmade bakelite golden bezel. On the black dial, you’ll notice the “KRAVITZ DESIGN,” adding to the already ample text as well as the red seconds hand matching the “DAYTONA” text color. Now, while the movement is still the Rolex Calibre 4130, it has been totally blacked out and made visible through an exhibition case back. To accent the black, you’ll see the 22-carat gold rotor and text on both the movement and case back. I think it just looks very, very cool, and I’m sure hands on images will reveal more about the execution. 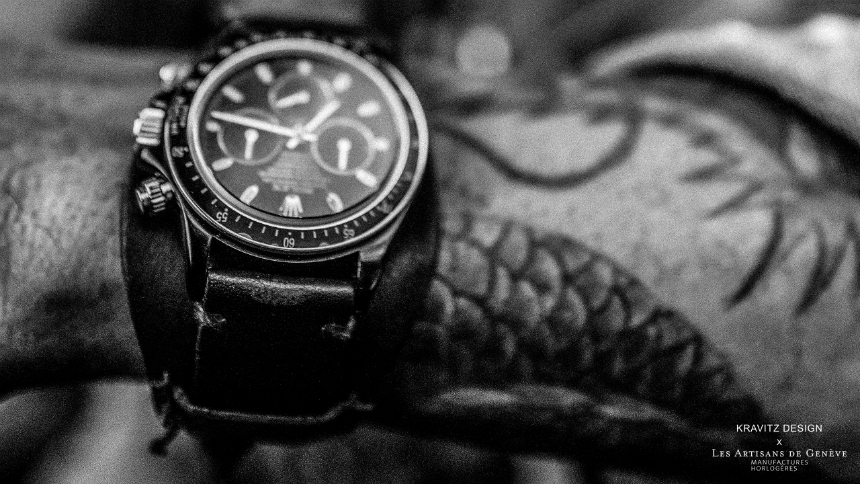 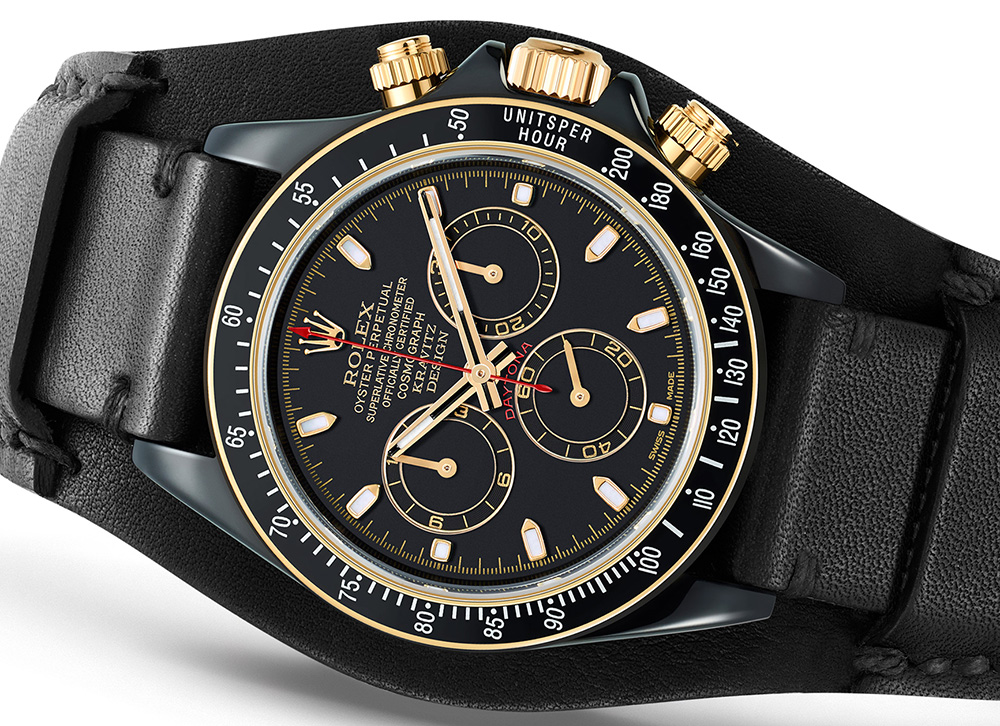 Something totally switched out from the original watch is the strap, which is a handmade Barenia calf leather done in a military cuff. It’s a smart choice since it adds more wrist presence, especially when you consider the 40mm case of the watch. A creative solution, and one that ends up being an aesthetically pleasing design. To top off the presentation, the watch comes in a Bluetooth JBL speaker case done in leather designed to resemble a roadie trunk and serve as a nod to Kravitz’s roots in music. They are calling this combination of speaker and watch case “Travel With Music” and it’ll be neat to check this out in person. 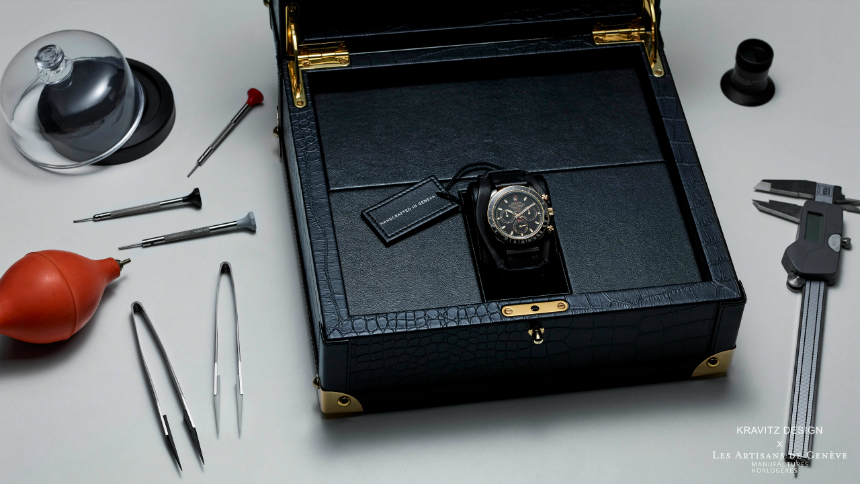 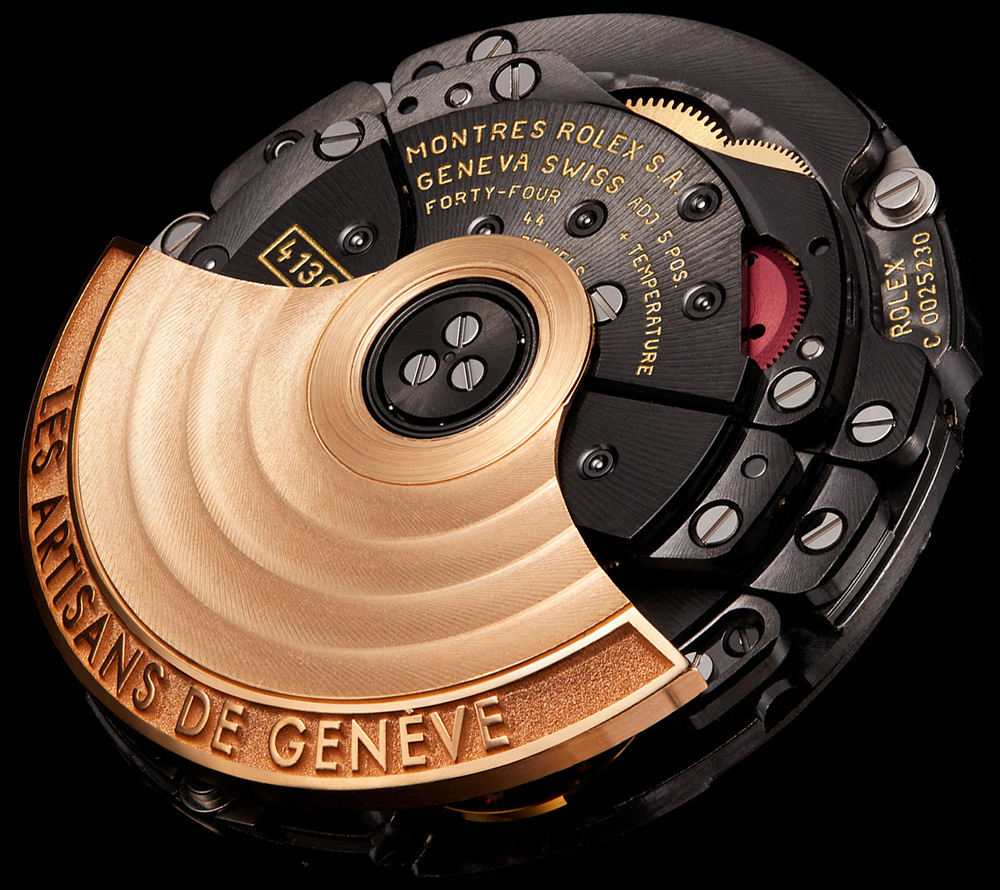 Yes, it’s a modified Rolex Daytona. Those words alone are enough to raise the blood pressure of some collectors, while it will cause other horological philosophers to attempt to resolve Theseus’ paradox. The additional fact that it is not only associated with, but at least partially designed by a mainstream celebrity will cause many of those critical of the watch to nearly short circuit in a commenting frenzy. Personally, I think it looks great, and even considering how many watches the aBlogtoWatch team sees every day, if I saw this piece on someone’s wrist I’d certainly be tempted to compliment it and ask them about it. I’m of the opinion that pieces like this should be a point of flattery for Rolex. Rolex stands uniquely in the world of luxury Swiss watches and is a globally ubiquitous luxury product in any category, and these “homage” pieces really do serve as tributes. And the point that one of these sold is a watch not sold by Rolex? 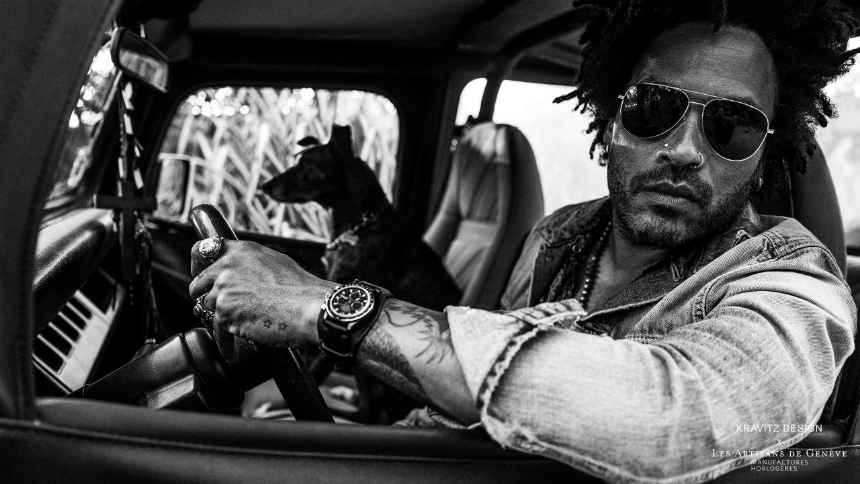 The figure 0.006875% represents this watch’s production of 55 as it would relate to Rolex’s annual watch production which stands at somewhere around 800,000. Yes, Les Artisans de Genève make other models in even more limited-production runs, but my point is to demonstrate that at the end of the day, these are products that will appeal to the buyer who just likes the concept, is attracted to the watch, and for whom the cost of this watch is as negligible as the percentage cited at the beginning of this paragraph. The  Les Artisans de Genève X Kravitz Design LK 01 Rolex Daytona watch will be limited to 55 pieces and have a price of €37,800. lesartisansdegeneve.com