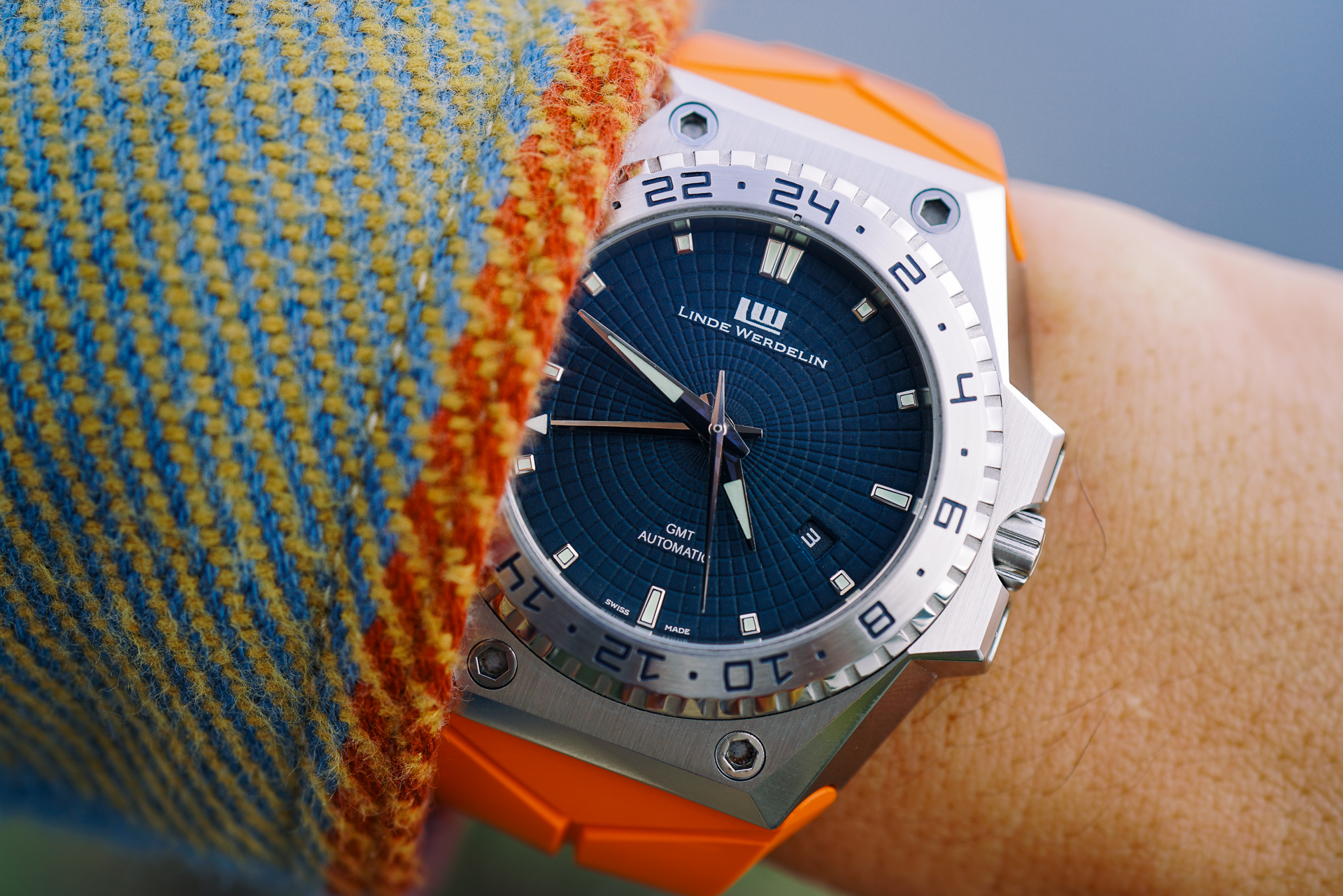 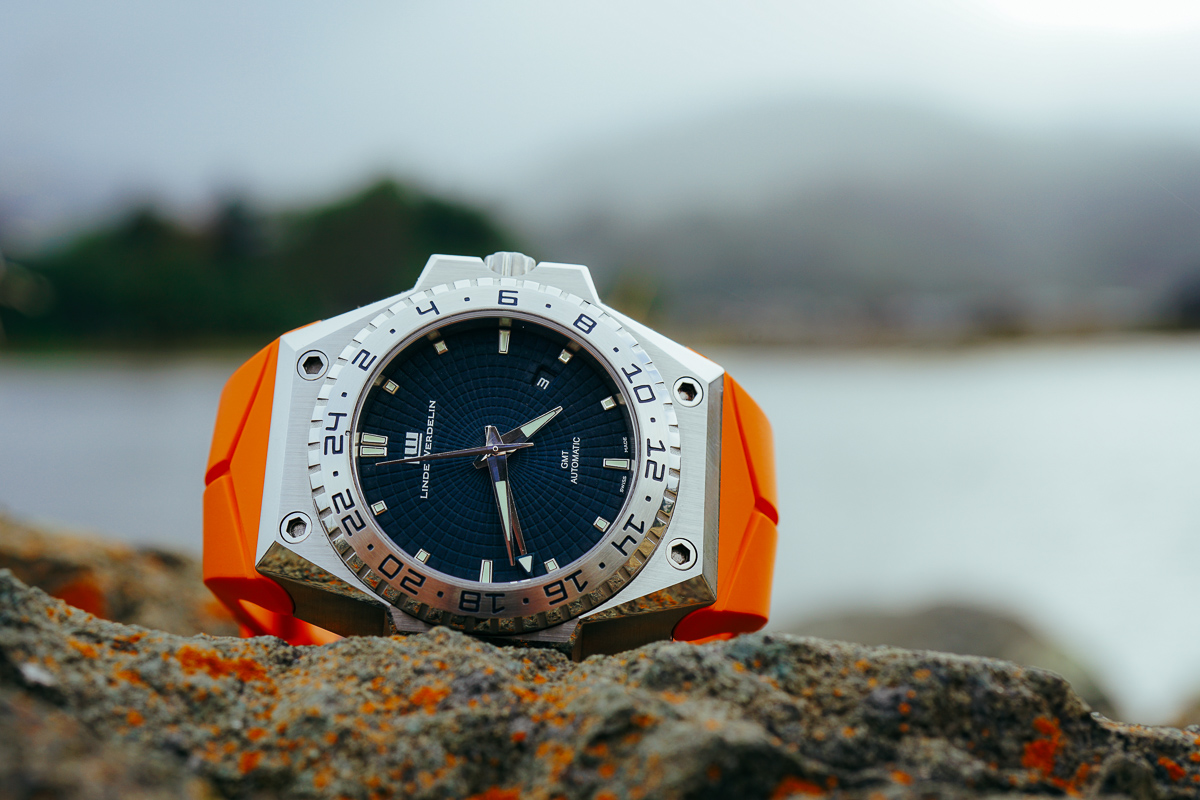 “Every time the experts told us what to do, it just never worked out. But every time we followed our instincts, even when it went against those industry traditions, it turned into a win for us.” Such has been the ethos of Jorn Werdelin, co-founder of his eponymous watch brand Linde Werdelin, who, for a little over a decade has made a name for itself by simply not doing things the old-fashioned way. And nowhere is this more evident than how the brand chooses to design and distribute its bold tool watches. 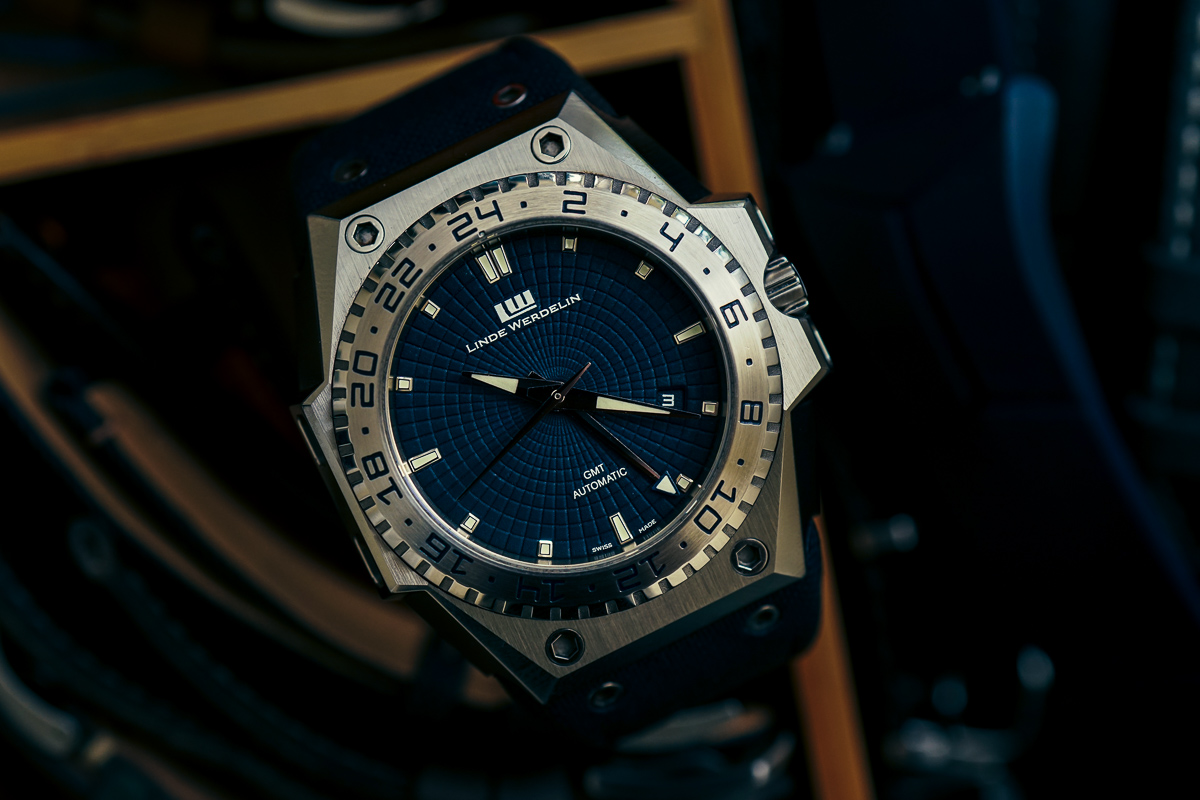 The Scandinavian brand’s latest release – the 3-Timer GMT ‘Midnight’ (named after its dark and moody matte blue dial) has recently been subtly refreshed with the addition of a trio of new dial colors, but otherwise remains largely unchanged since its inception in 2009. The uniquely shaped case is still milled from a single block of stainless steel, and still displays three time zones via a 24-hour GMT hand and a bidirectional rotating 24-hour bezel – all details that also persist from the brand’s source material: the ‘Biformeter.’ 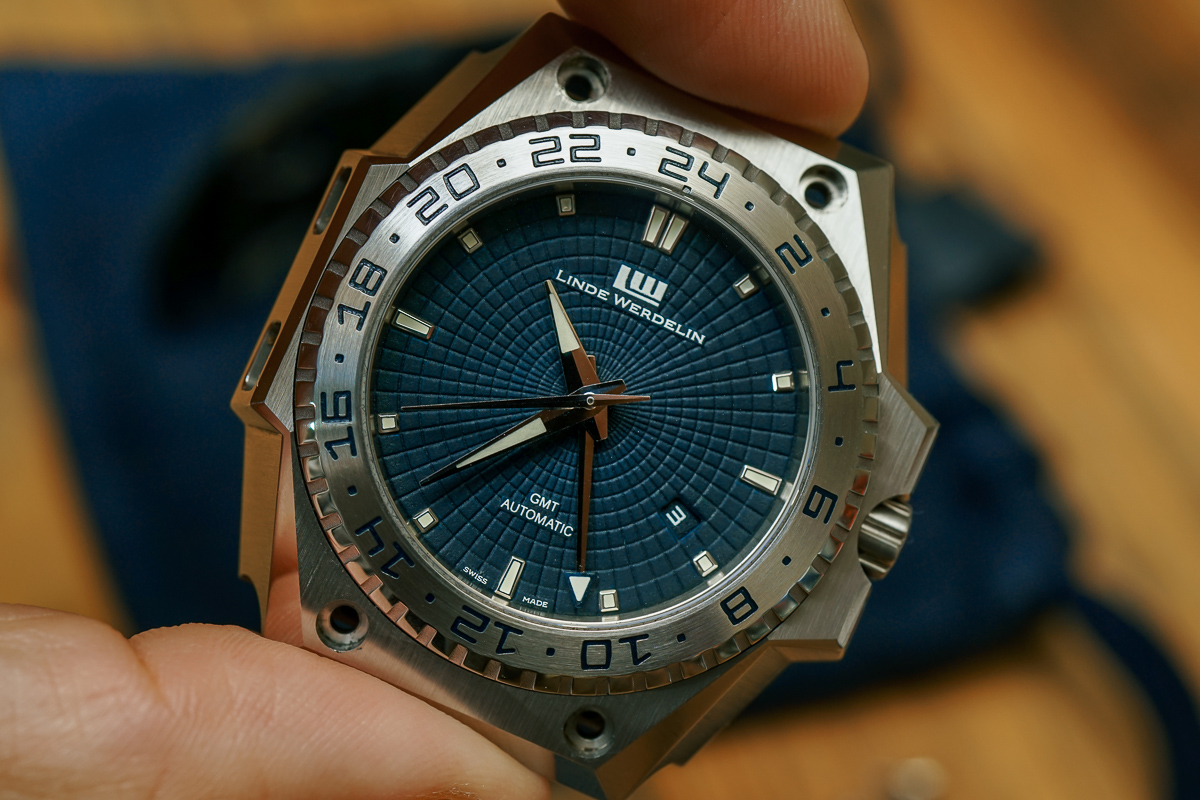 This ‘hands-off’ approach to design is pretty novel in an era of increasingly short product cycles where every brand wants a new icon, but its customers don’t want to wait for it. Thankfully, Linde Werdelin has bravely refrained from tampering with its core design language, enabling signature models like the 3-Timer ample breathing room to lay down roots and develop a unique path to icon status. Getting there usually requires patience and design consistency – both hallmarks of a savvy, modern independent such as this one. 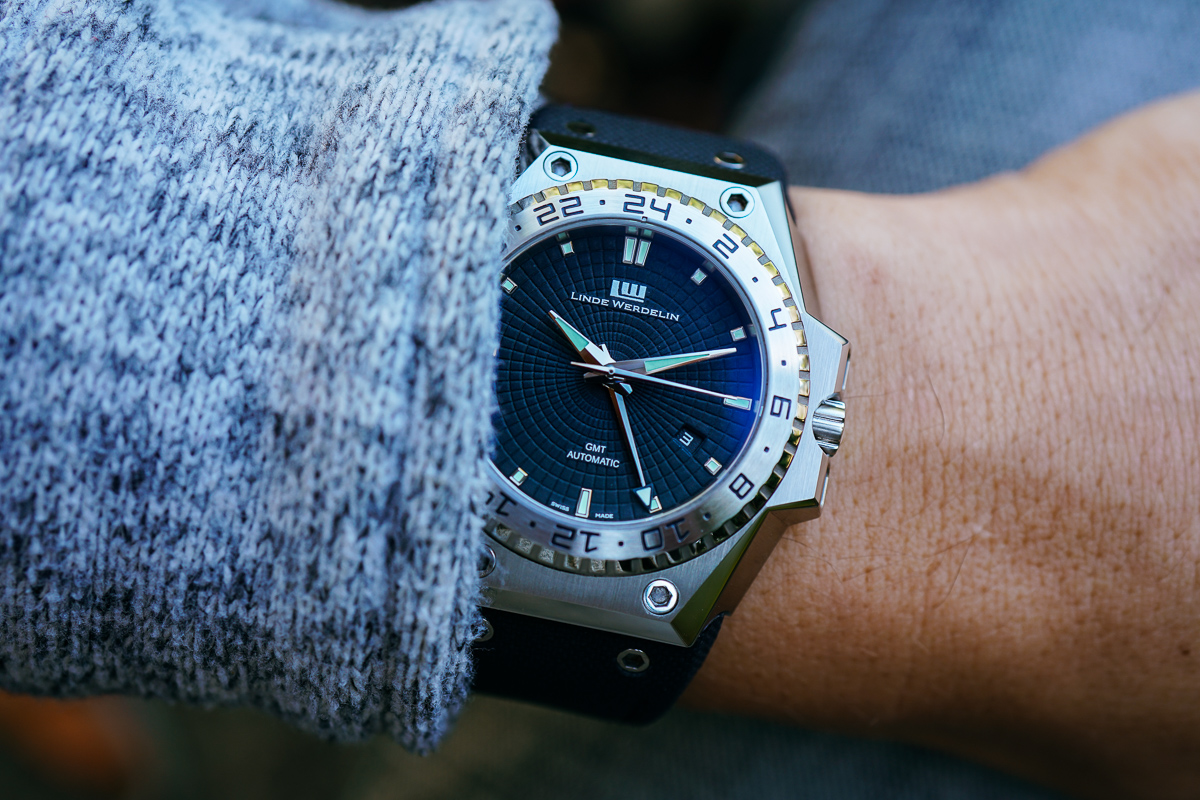 Now, if you’re new to this relatively young brand, think of the 3-Timer as the brand’s Explorer II – a capable (and comparably priced) adventure watch that expands on its three-hand base model with multiple timezone-tracking functionality. Of course, this is done through a 24-hour GMT movement and engraved bezel. But that’s about where the similarities end; as the 3-Timer exhibits more angles than a protractor. Hallmarks of its unique, vaguely steampunk-inspired case design include sharply contrasting facets, upward-facing hex screws, and distinctive ‘ears’ at both 3 and 9:00, all but guaranteeing it’s not mistaken for anything else in its segment. 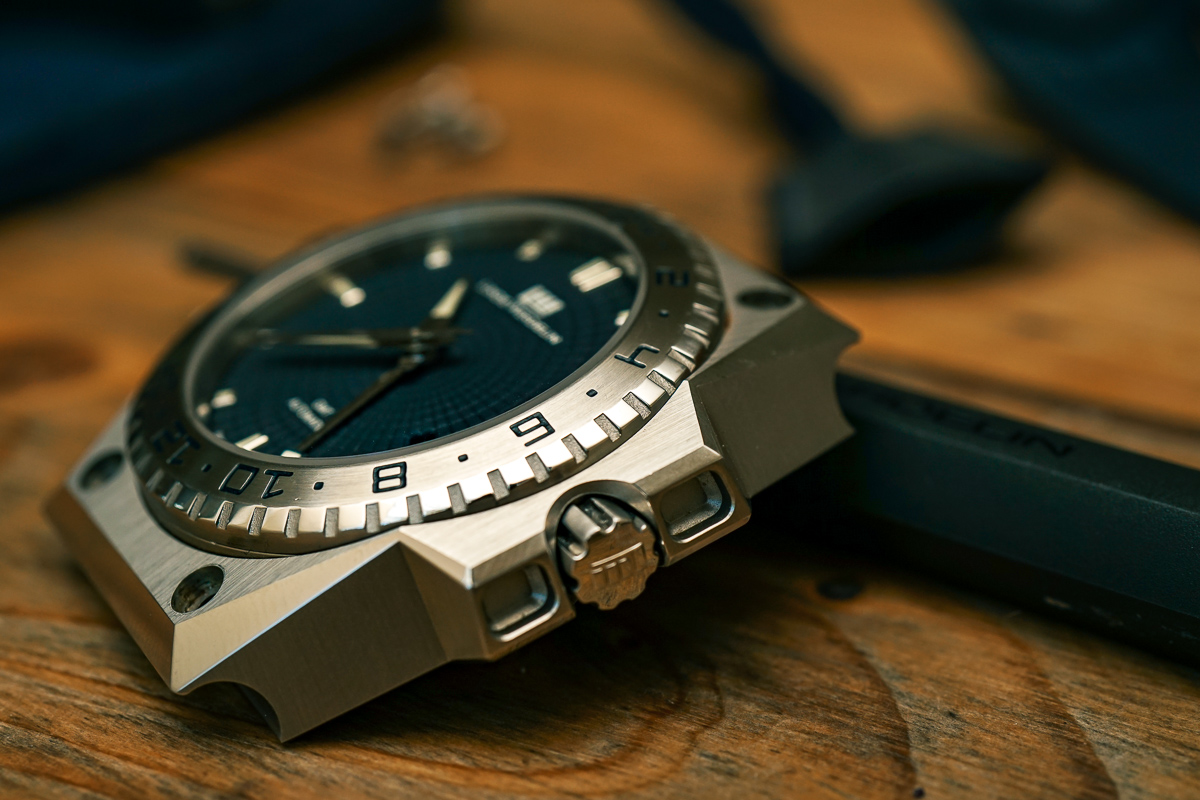 While most of the aforementioned design elements which are just that – elemental, those ears actually serve a specific purpose: as docking points for a pair of (now discontinued) digital computers for diving and skiing, called ‘Reef,’ and ‘Rock,’ respectively. But even if you have no plans of taking advantage of that hybrid functionality, the fundamental purpose of those ears are now as ingrained in the personality of the watch, and are just as crucial as the four hex screws at each corner of the case, used for swapping out the straps. The only real downside to those ears is that they tend to hide the small crown, making it difficult to grip and wind – which is sort of an oddity for what’s otherwise a markedly tactile 200m water-resistant sports watch. 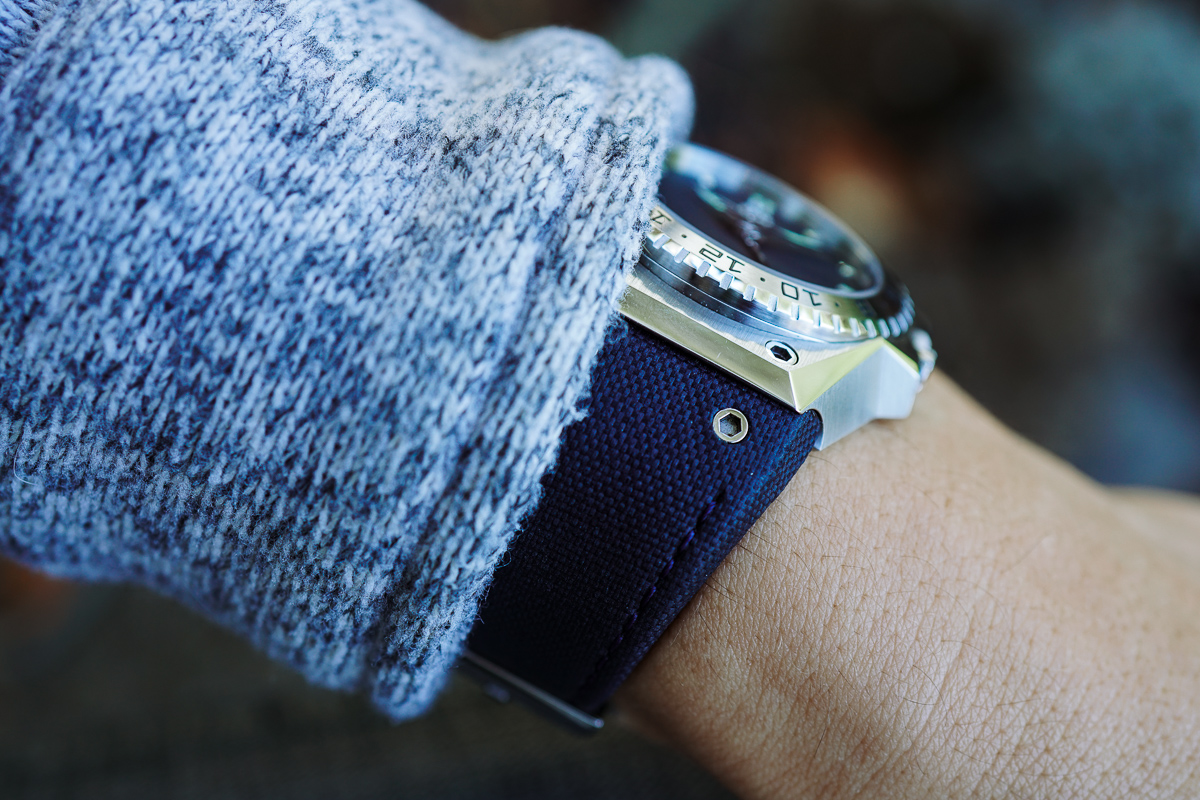 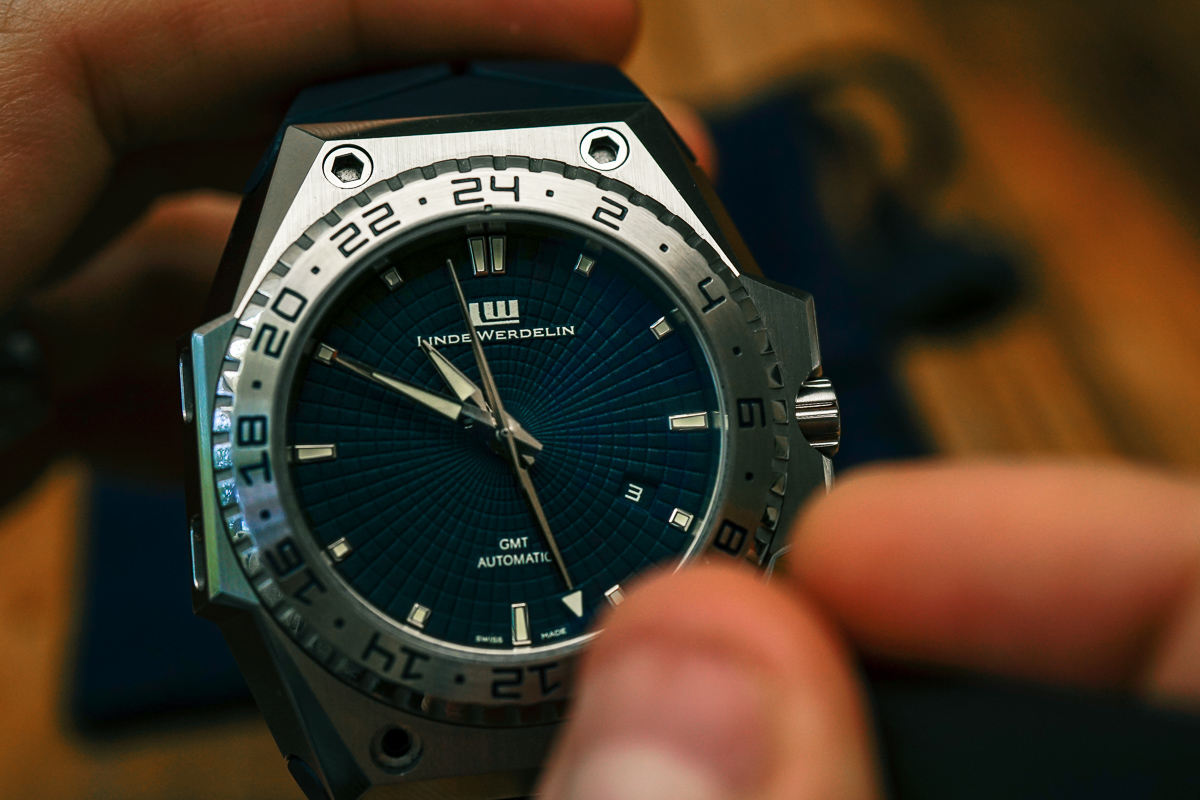 Official specs for the 3-Timer suggest a 44mm by 46mm stainless steel case. On-wrist, those proportions tend to change somewhat – the watch feels much longer than 46mm due to its broad shoulders, but much thinner than its 15mm thickness, likely due to the cuff-like combination of its subtly curved case and integrated strap. While the bold visual DNA of the 3-Timer might be more of an acquired taste for some, it is objectively one of the best-fitting, and most comfortable watches my 6.5” wrist has seen in recent memory and is an absolute treat to wear. It’s not a heavy or large watch by most traditional measurements, but it’s worth mentioning that it is visually large, and surprisingly assertive on the wrist despite its sleek profile. Even still, in titanium, and with an integrated bracelet, this thing would be an absolute indie monster, and a perfectly adventurous antidote to the legions of Royal Oak watches out there. 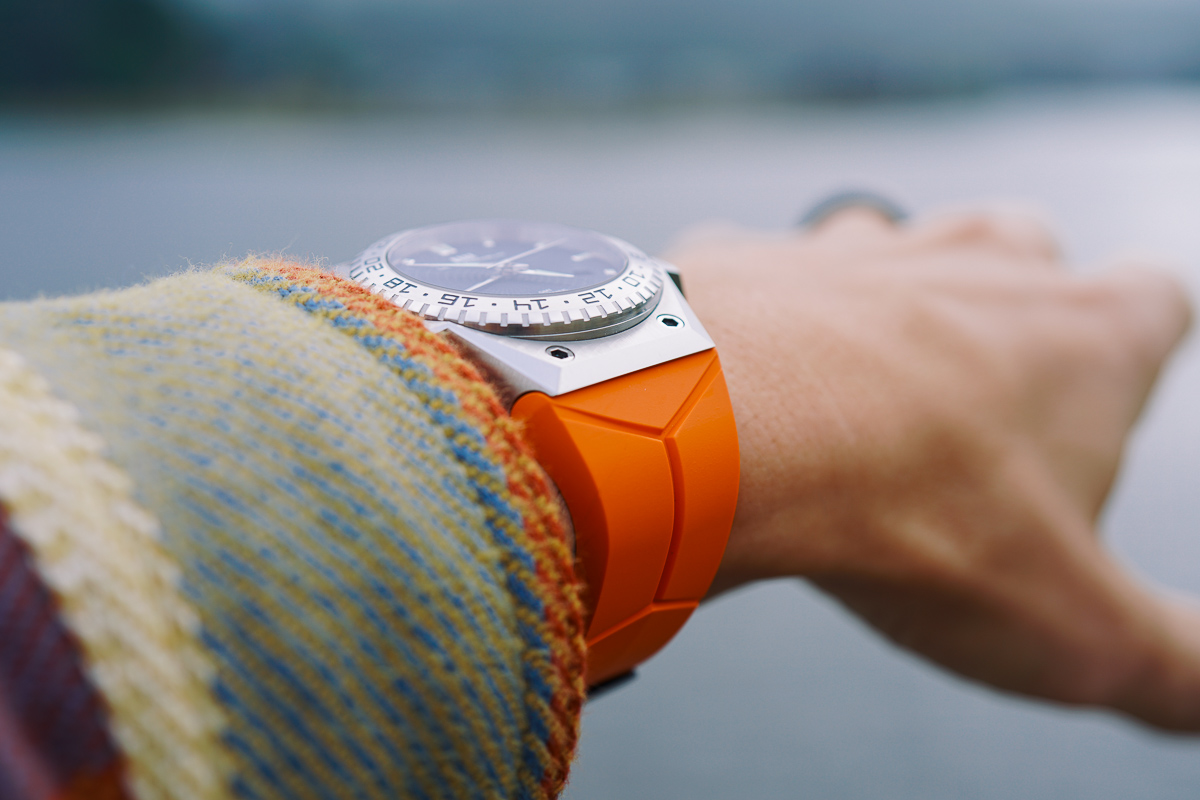 Convinced that the watch industry’s traditional brick-and-mortar formula was a zero-sum game, Linde Werdelin established itself as an outlier, and one of the early adopters of digital media and online retail as its primary means of communication and distribution for its product – no small measure of confidence for watches whose prices start at around $5,000. It all represented a conscious paradigm shift away from the traditional distribution model to focus on ultra-small, built-to-order production runs and direct sales to emerge as a truly non-traditional brand that operates more like a boutique industrial design firm than a watchmaker. 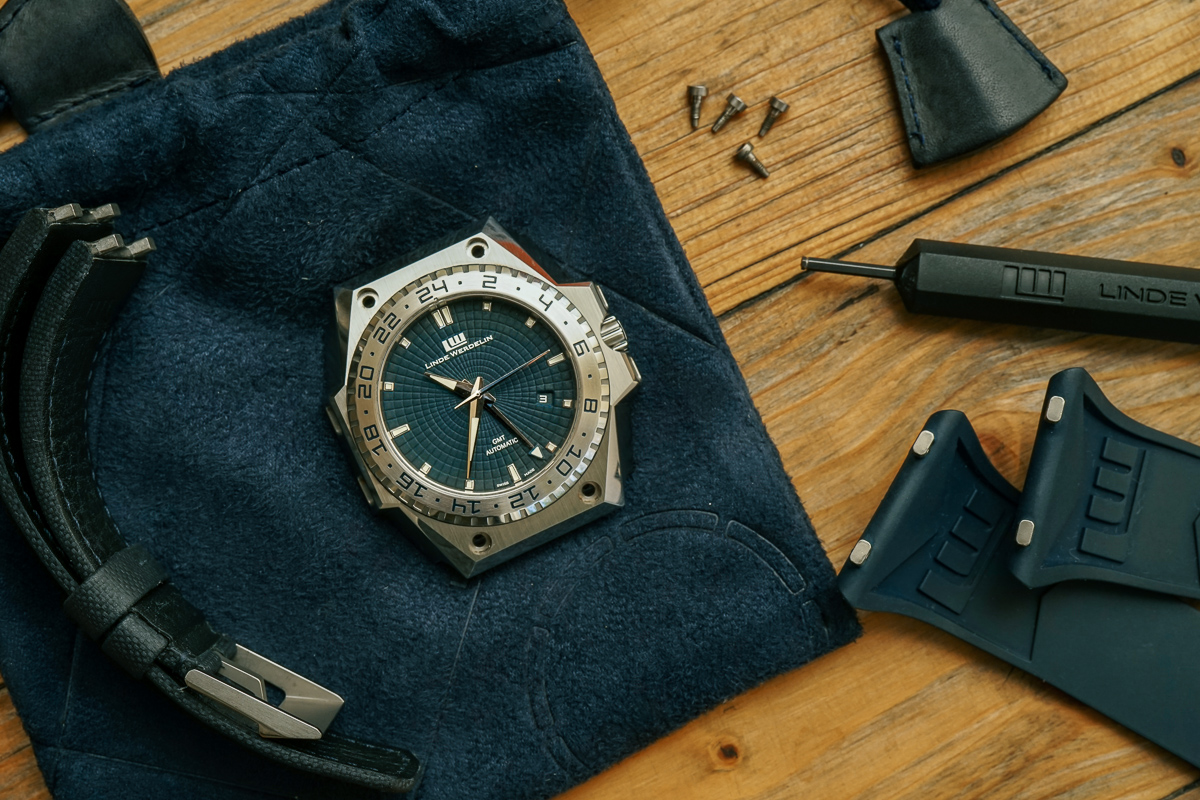 But just how small are the production runs? For context, Rolex is widely acknowledged to be making around a million watches a year, a figure which is split between multiple collections. By contrast, Linde Werdelin is committed to making 33 pieces total in each dial color of the 3-Timer. Thirty-three. Of course, when you’re producing as few watches as this, you can absolutely afford to get some of the little details right – like the custom date wheel to match both the typography and color of its surroundings or the cool matte graining found within the concentric waffle pattern on the dial. The AR coating is another notable standout as the only thing sharper than the case angles, delivering distortion-free clarity at nearly every viewing angle. But on a detail level, nothing is quite as cool as the case itself, which doesn’t just exhibit a very high level of finishing across its many surfaces, but a wildly unique and complex design that spans both bezel integration, and strap attachment points. Speaking of which, remove both straps with the included hex key, and you might notice the silhouette of what just might have been the watch’s original inspiration: a Jules Verne-era submarine. 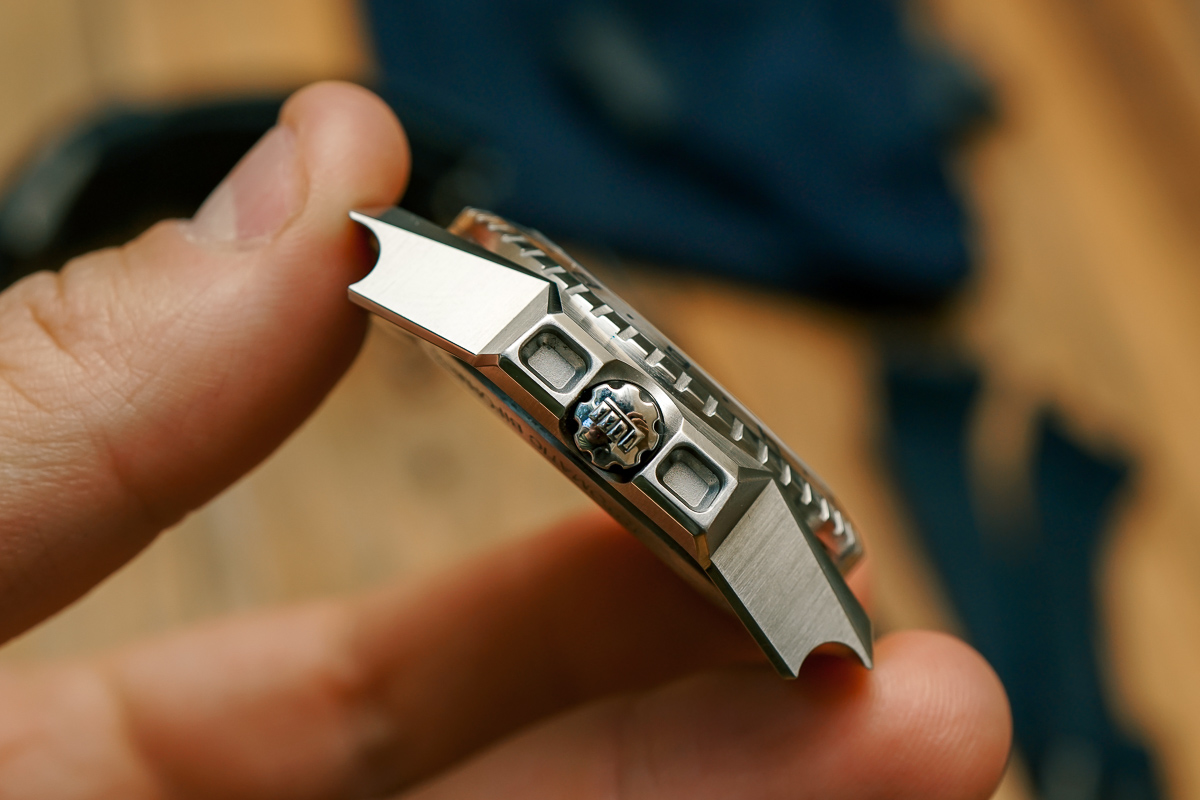 Sure, it’s not quite as elegant as a Royal Oak, nor as classically designed as an Explorer II, but it’s hard not to see the 3-Timer competing for the same customer. That said, it’s not priced to be unattainable, but it’s still well above what you’d expect from lasting designs on more established brands like Tudor, Omega, Panerai, or Grand Seiko. The real key differentiator here though, and what I’d suspect comprises a large chunk of the asking price, is the design and build – oft-overlooked details that spell big price increases when it comes to tooling and machining for small production runs. 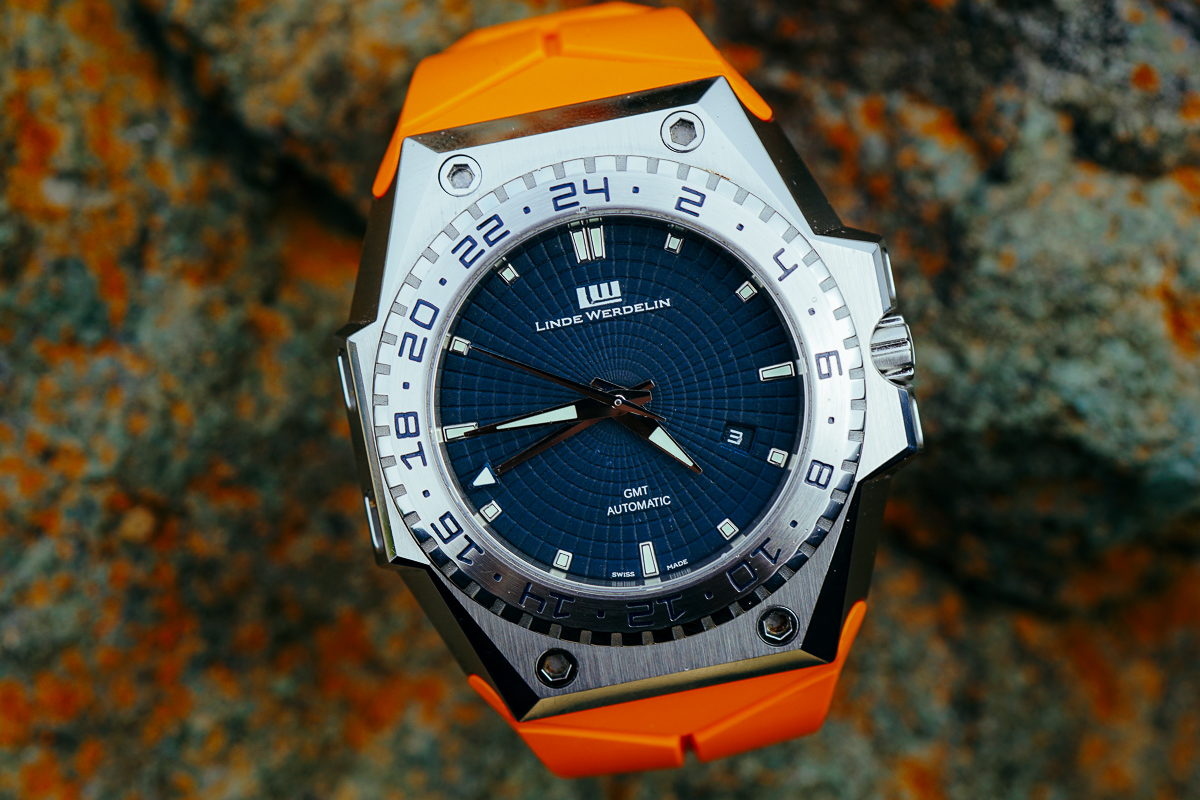 The GMT watch is enjoying something of a hot streak this year, thanks in part to arguably 2018’s most sought-after release: the Rolex GMT Master II ‘Pepsi’ – a watch that’s gotten so difficult to track down, we rounded up ten of its best alternatives (including this 3-Timer). Within that list, there are plenty of great options and no small amount of variety in price or design, but you might notice that the 3-Timer is by no means an inexpensive watch amongst even its comparably-specced peers. However, you don’t buy a Linde Werdelin instead of other alternatives like the Rolex Explorer II, the Omega Planet Ocean GMT, or even a Panerai Radiomir 1940 GMT out there – you buy it in spite of them because ubiquity quite simply isn’t for everyone. The price of the Linde Werdelin 3-Timer ‘Midnight’ is $6,338 USD – a slight premium over the standard 3-Timer editions, as it ships with two strap options. For more information, head over to lindewerdelin.com.

Necessary Data
>Brand: Linde Werdelin
>Model: 3-Timer ‘Midnight’
>Price: $6,338 USD
>Size: 44mm
>Would reviewer personally wear it: Yes.
>Friend we’d recommend it to first: Guy who wants a sporty GMT watch that comes with the assurance that no one else in his zip code will also have one.
>Best characteristic of watch: Beautiful case lines, truly unique construction, visually complex but easy to wear.
>Worst characteristic of watch: Quite expensive for what’s not a ‘true’ GMT, due to ETA movement capability.