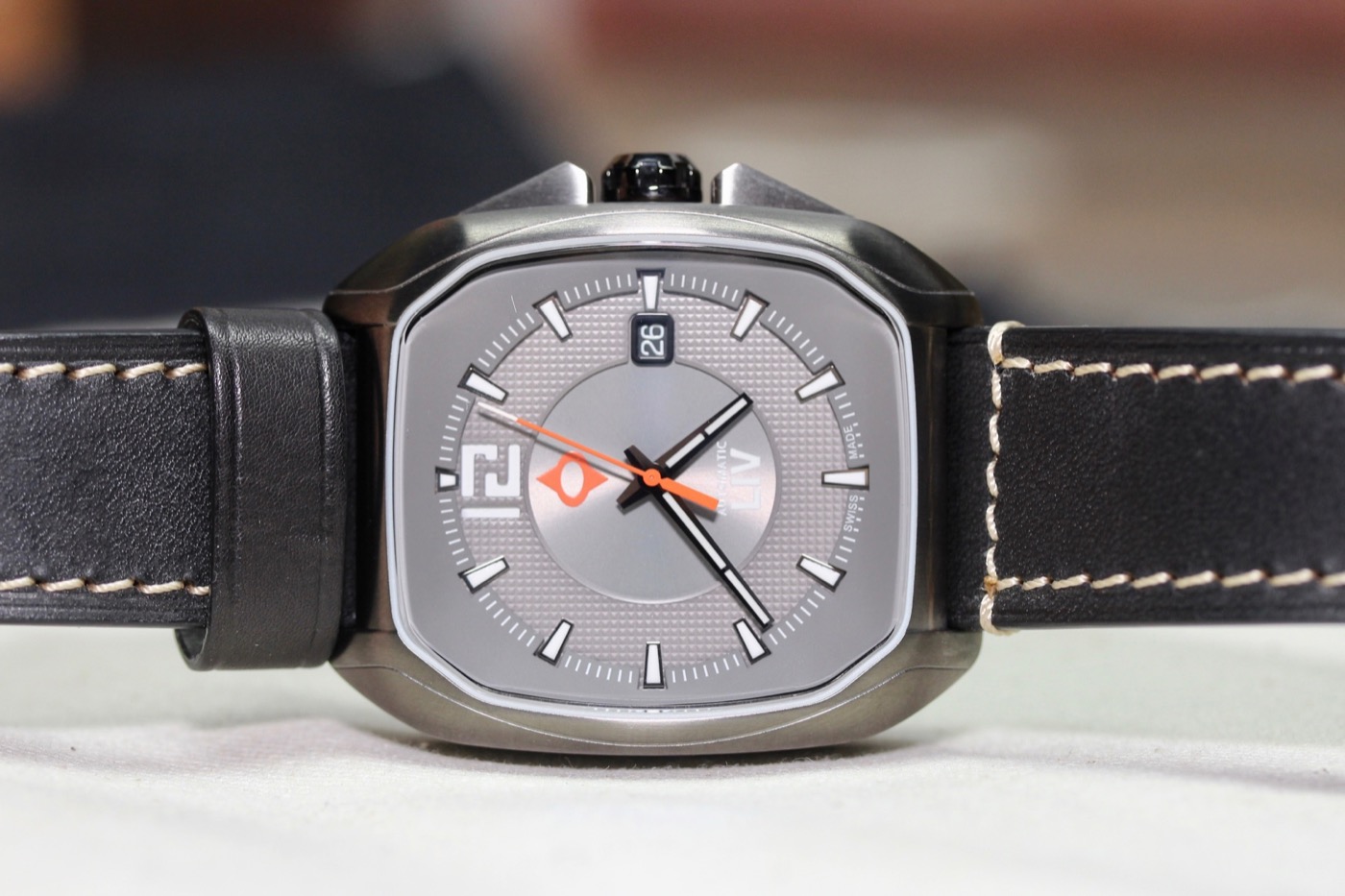 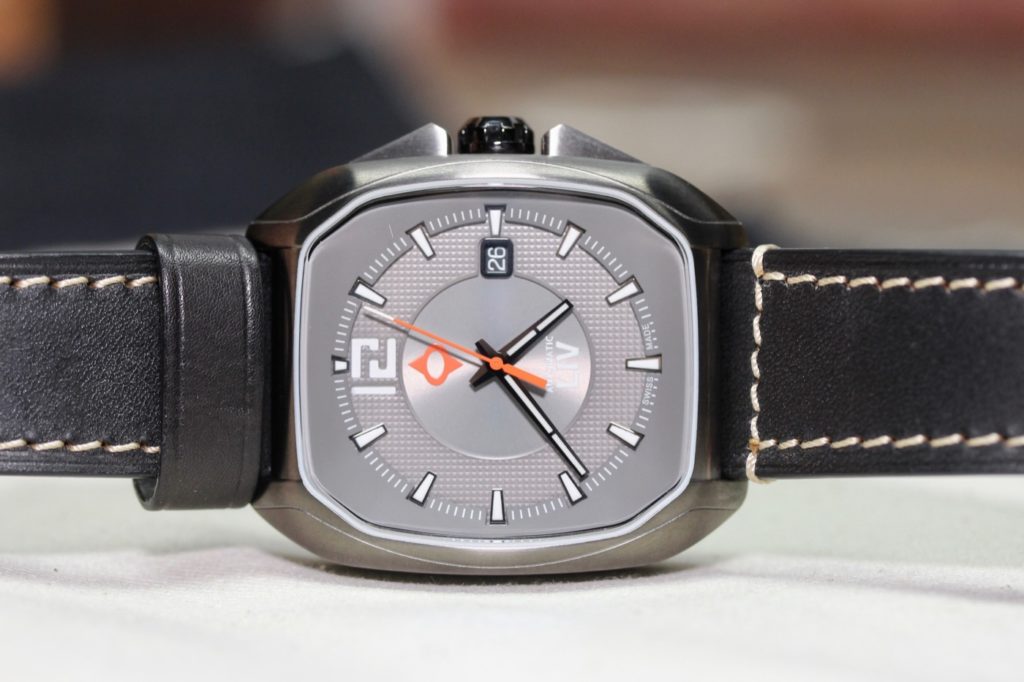 Stop me if you’ve heard this story before. A new watch brand starts up, promising to “cut out the middleman” and bring “big-name luxury and quality” to your wrist at affordable prices. Today, we almost expect that to be part of the default script for crowd-funding campaigns. LIV was on the leading edge of the wave that adopted these sorts of statements as the norm. Now, five years out, I think it’s safe to call the brand established. Today, we’re taking a look at the LIV Rebel watch.

LIV positions itself as doing things differently. You’re not a customer, you’re a fan. They also try to foster the sense that these are small-batch watches. That’s difficult to do effectively. Obviously, you can’t flood the market with too many timepieces or it’ll be clear that the watches aren’t limited at all, but similarly, you do need to sell your wares in order to stay in business. To that end, LIV, as a company, is hitting the mark. But what of the watches themselves — do they hit the mark? 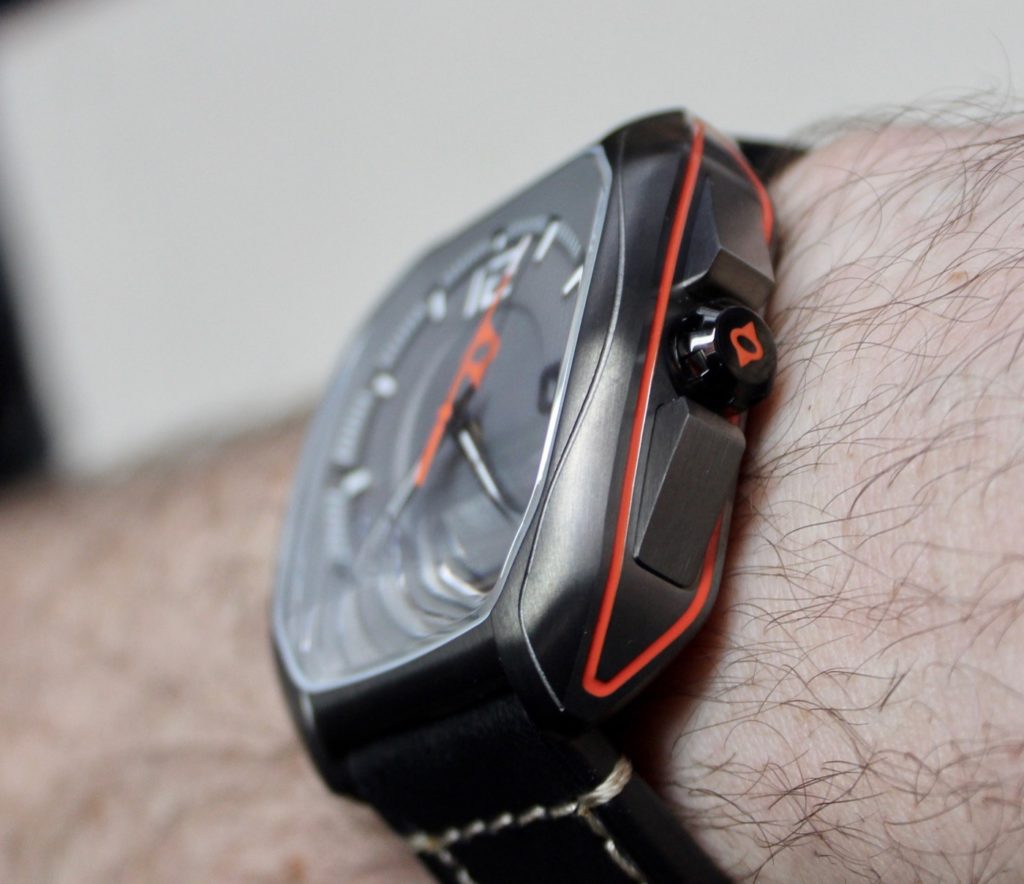 The Rebel line is pretty identifiable, with a bold case shape and aggressive styling. In fact, one of my friends, who isn’t much of a watch guy, immediately noticed the neon orange stripe on the side of the case and asked what the watch was. This led to a discussion of the watch and some of the thoughts I’d been forming as I’d been wearing it. There is no denying that the LIV Rebel is a large watch. The funny thing is, at 48.5mm lug-to-lug and 13.1mm-thick, it’s not all that much larger than the Christopher Ward I just reviewed. For all that, though, it wears much, much larger. 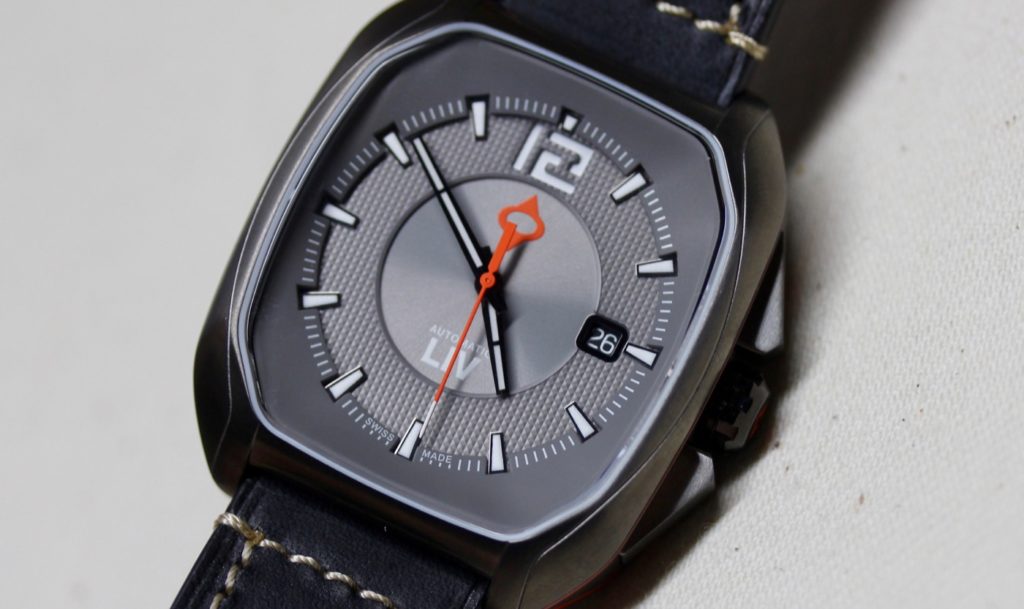 I think this is due to the visual tricks going on with the dial. There’s a central circle (which is intuitively read and easy on the eye), but then the dial slopes up to the rectangular shape of the case, dwarfing the circular portion. And when you view the case from the non-crown side (check the gallery below), it just looks like a big chunk of steel (which, in all honesty, it is). But that’s fair enough. A brand can decide to create a larger watch, as many have tastes that draw them to a bigger timepiece. If you’re going to do that, though, you need to make sure the rest of the design follows the “large and in charge” mandate. 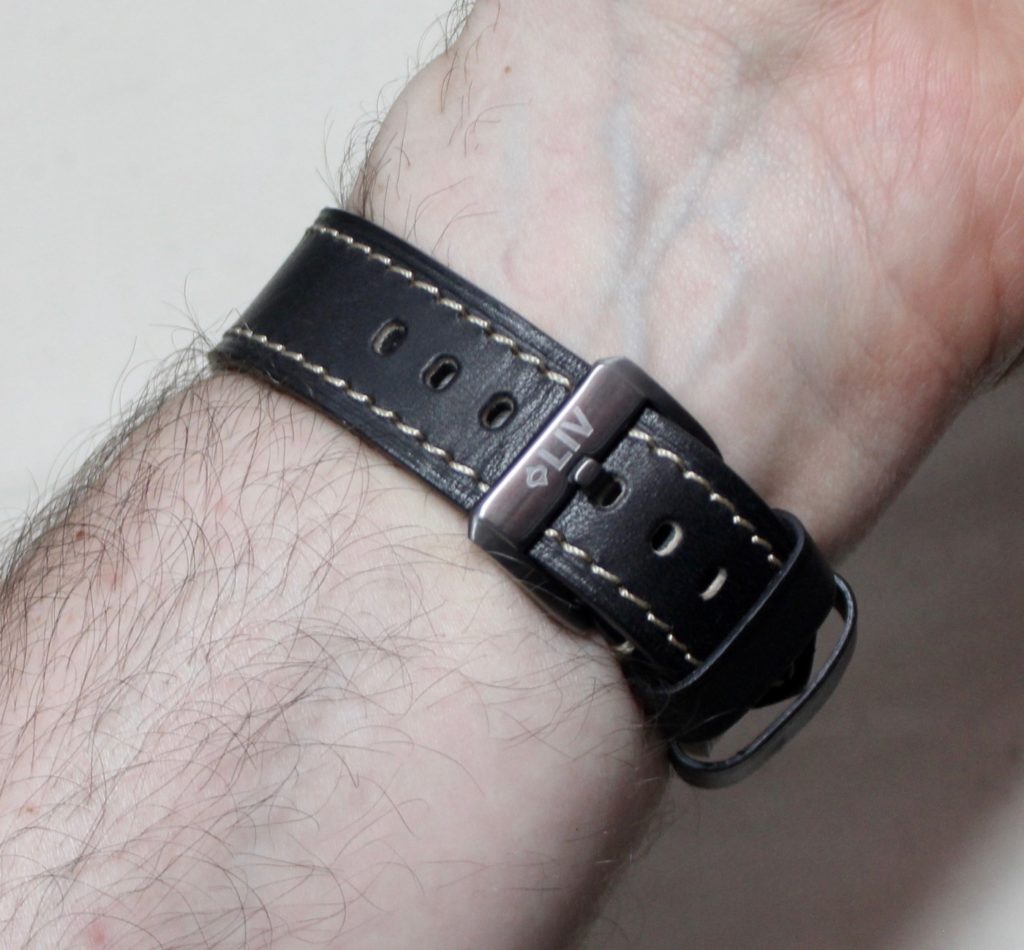 As you might guess from that last sentence, the LIV Rebel has some shortcomings in that regard. For starters, how about the strap? The specs list it as being able to fit up to a 9-inch wrist. However, on my 7.25-inch wrist, I was using the last or second-to-last hole on the strap (that photo up above at the third hole was way too tight), so I don’t know how a person with a 9-inch wrist would wear this. 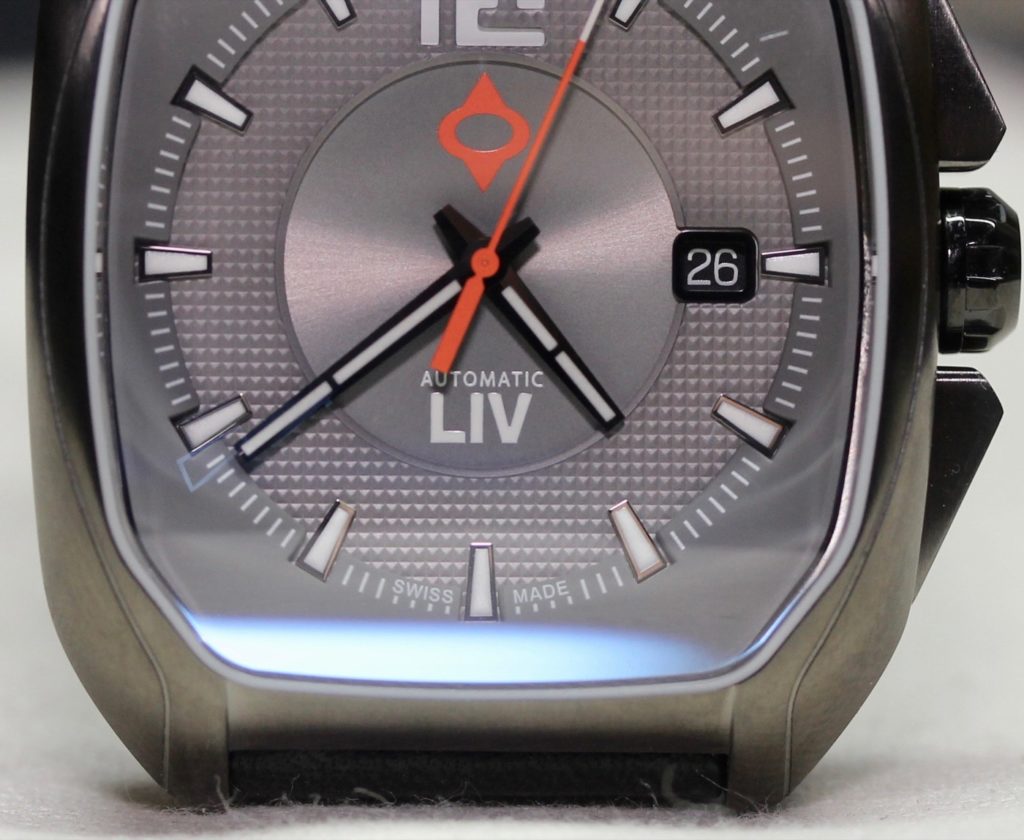 As for the dial side, there are a few proportional issues with the design. The circular insert is as big as it can be, given the geometry of the case. And while the hour markers and logo appear to fit the overall dimensions well, the hands are just way too skinny for a watch of such wrist presence. Their length is sufficient, but they are so slim they would look more at home on a dress watch, not a sportier, larger piece. 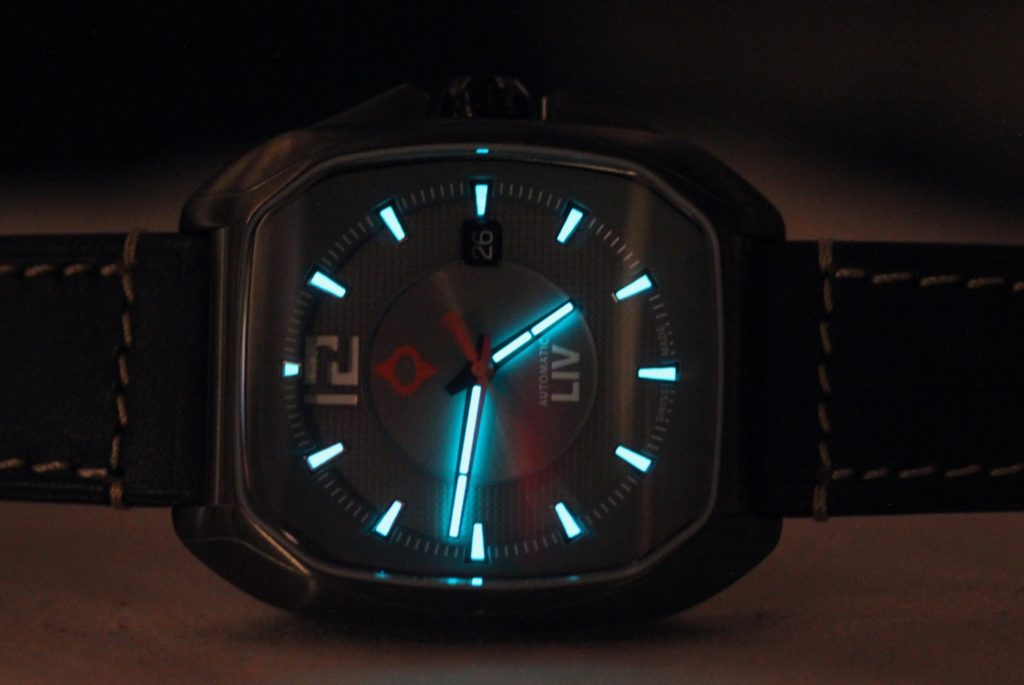 At night, they don’t look so slim, as the lumed inserts match up pretty well with the tips of the luminous indices, but in normal light, that thin strip of lume on the hands artificially narrows them at a glance. As for the indices, they really could stand to be a lot longer. I would have liked to see them extended down to the inner circle of the dial; that would be a bold look and in keeping with what the watch is (presumably) going for. Finally, you’ve got the date window. It’s great that it’s color-matched (or at least dark) but its position shows that it’s a smaller movement inside. And why is the cutout so small? Go for a custom disc with larger numerals, and hey, maybe even play around with a magnifier mounted in the window (a la Oris) to up the visual punch of the watch. 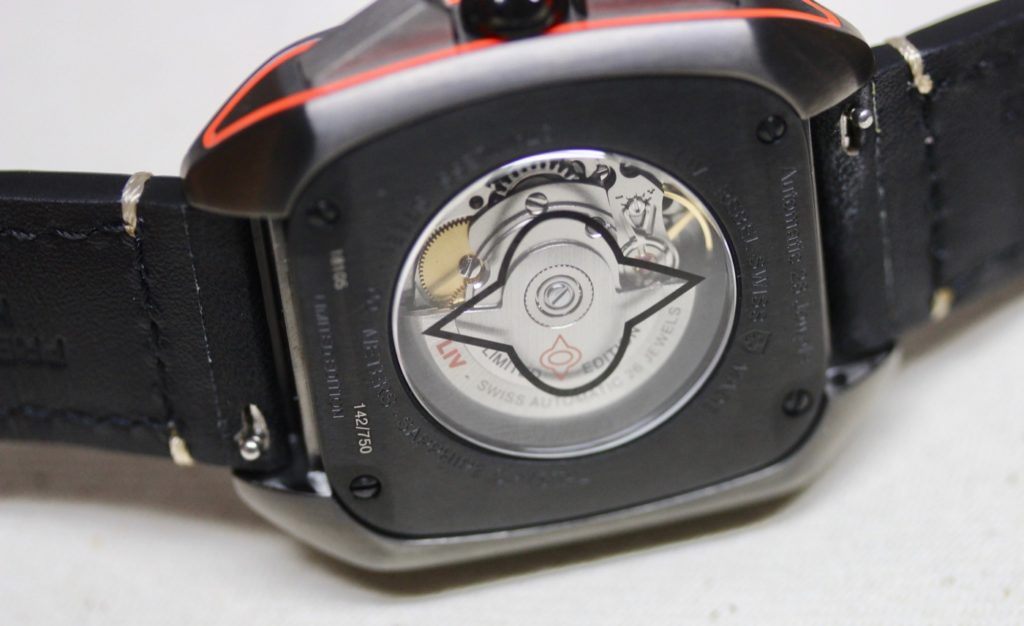 Speaking of the movement, this is one place that LIV has committed to quality, as the brand has done consistently. In this case, the LIV Rebel relies on the Sellita SW200, a Swiss automatic movement that we see popping up more and more, particularly as brands find it harder and harder to get regular, reliable supply from ETA. When you consider the movement choice, along with the stainless steel case and sapphire crystals (both front and back), it does make the price seem a pleasant surprise. The retail price of the LIV Rebel watch is just $590, which will no doubt go down well with the army of fans they’ve already won over, and it may well earn them a few more. 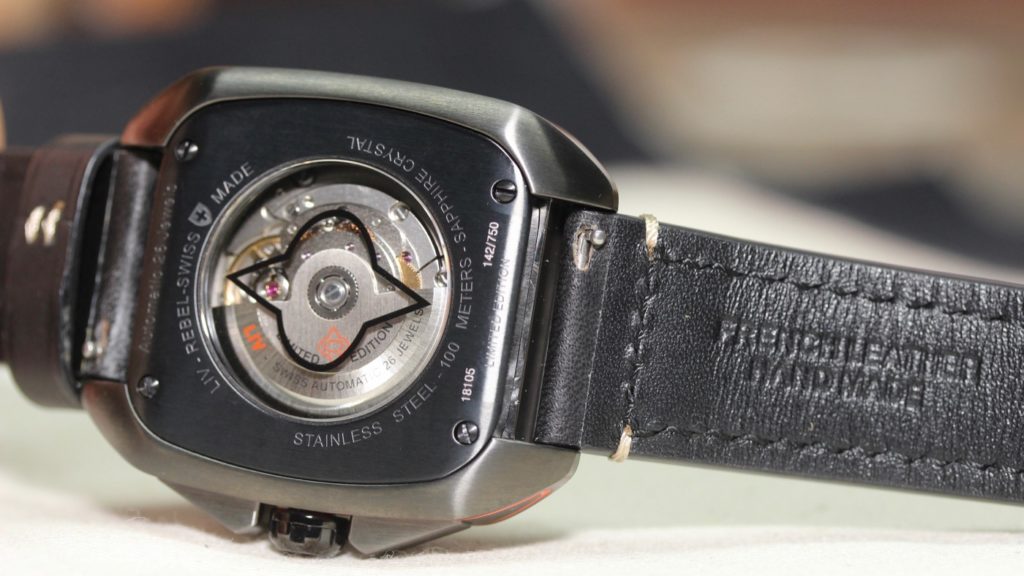 If you were judging the LIV Rebel solely on the merits of the spec sheet, that price tag makes the watch almost a no-brainer. Unfortunately, when you get into the execution of the design, the value proposition breaks down. At the end of the day, the watch feels like a disappointing mix of too-small design elements shoved into an overly large case. In other words, there’s an identity crisis here, and it’s not a new one in the making, as the Rebel aesthetic shows up in several of their models. I really wanted to like the watch, given the brand mission, but I just couldn’t get there. It’s not that the watch is a bad one — it’s just not a very good one. Learn more at livwatches.com. 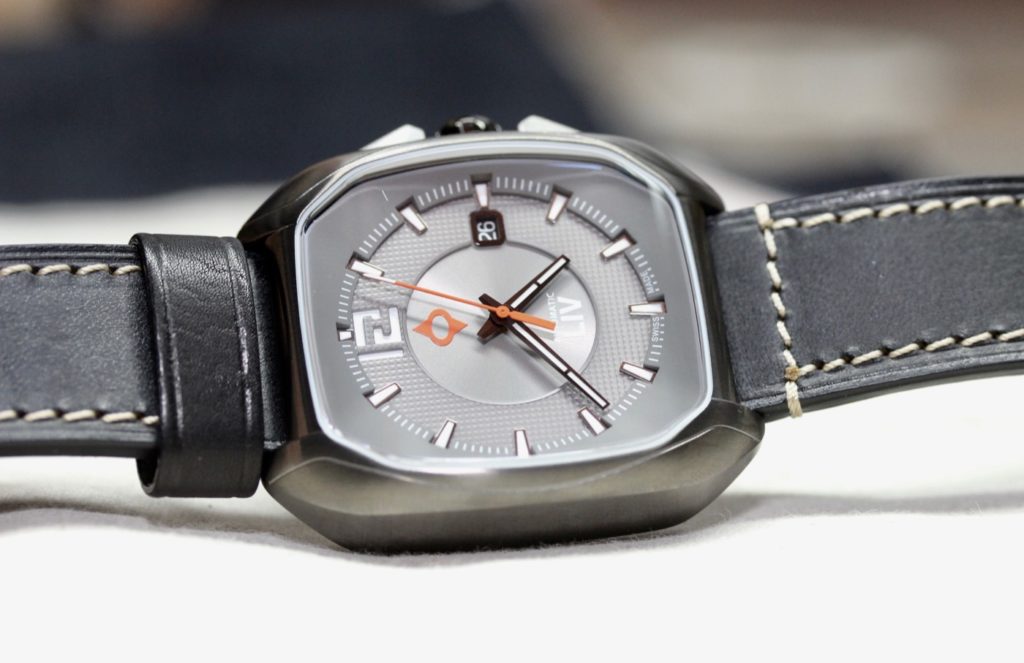 Necessary Data
>Brand: Liv Watches
>Model: Ref. 2540.48.35 Rebel-A
>Price: $590
>Size: 41mm / 13.1mm thick; 48.5mm lug-to-lug
>When reviewer would personally wear it: That’s going to be a negative, Ghost Rider.
>Friend we’d recommend it to first: No one, to be brutally honest.
>Best characteristic of watch: I did rather like the inset stripe around the edge of the case on the crown side.
>Worst characteristic of watch: It’s a small watch trying to be big, and it forgot to supersize some key elements.