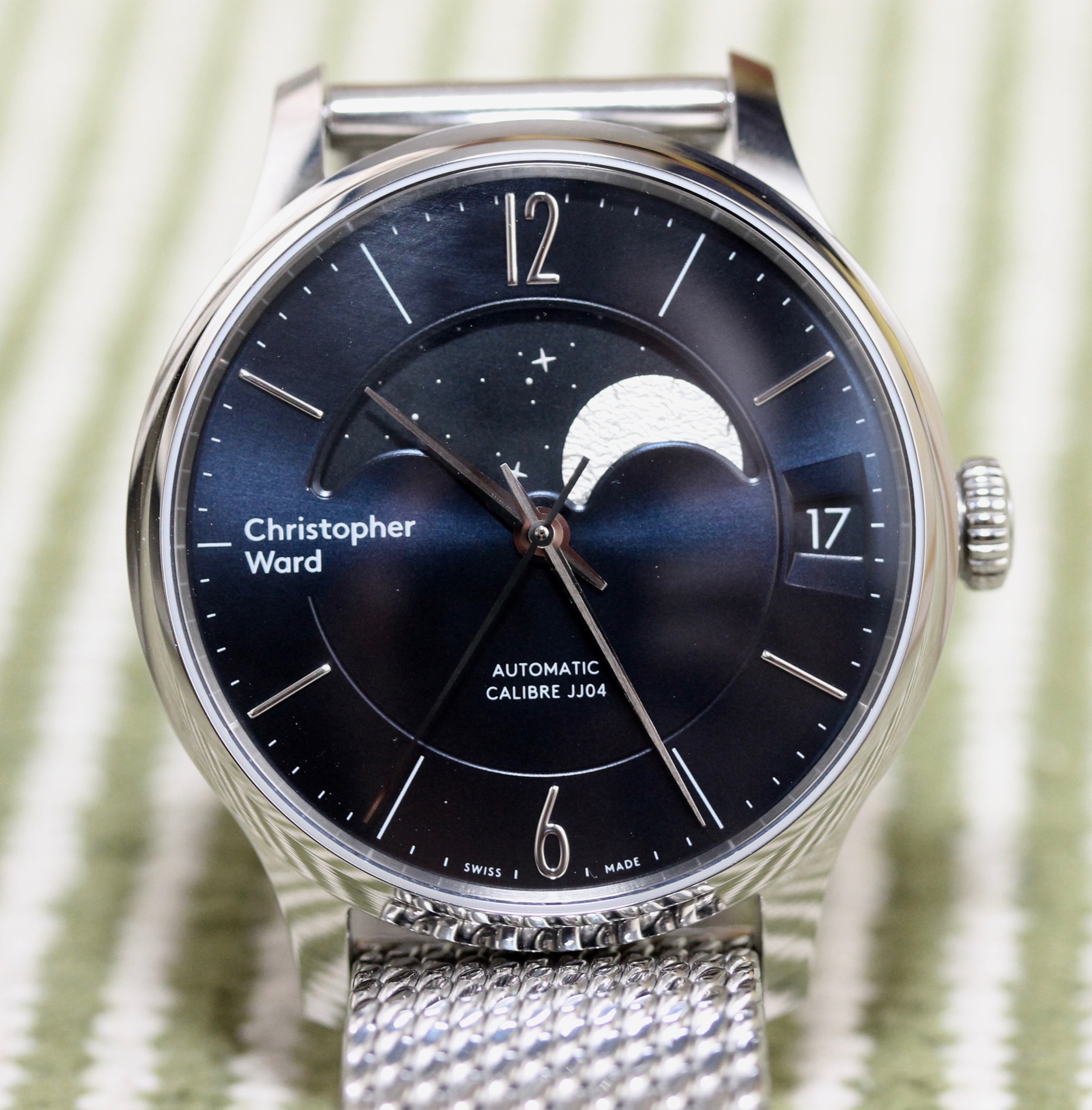 I’ve been a fan of Christopher Ward watches since I first went hands-on with a C65 Trident. The brand has been providing a solid mix of interesting and classic designs, along with some rather affordable price-points, and it’s been going a bit more upmarket over the past few years, both with designs and movement modifications. Today, we’ll have a look at one of its dressier pieces, the Christopher Ward C1 Grand Malvern Moonphase. 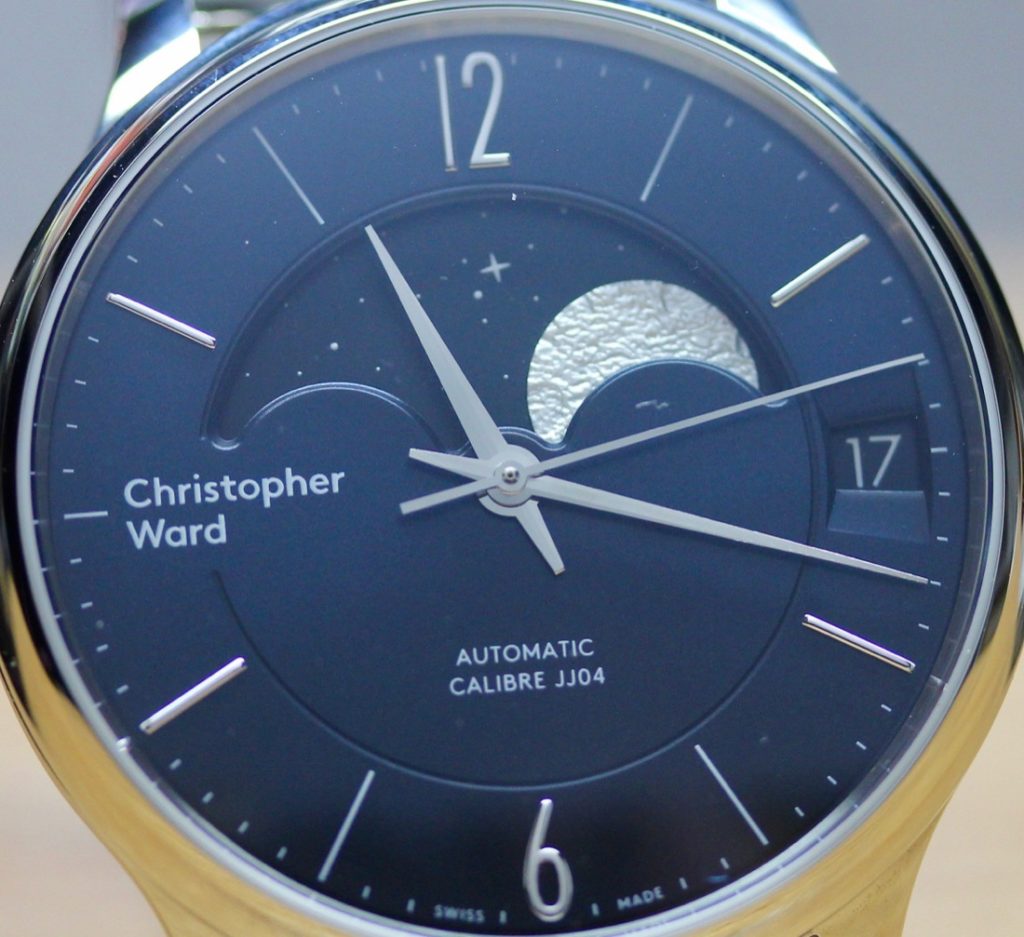 Christopher Ward is no stranger to the world of moon phase watches. The brnad first introduced one in 2015, with the C9 Malvern Moonphase. Now, four years down the road, the idea of that watch has been tweaked and upgraded to fit in more with the aesthetics that the brand is going for with its higher-end dress watches. And yes, when it comes to a dress watch, I think a moon phase is definitely a preeminent complication to have in play. 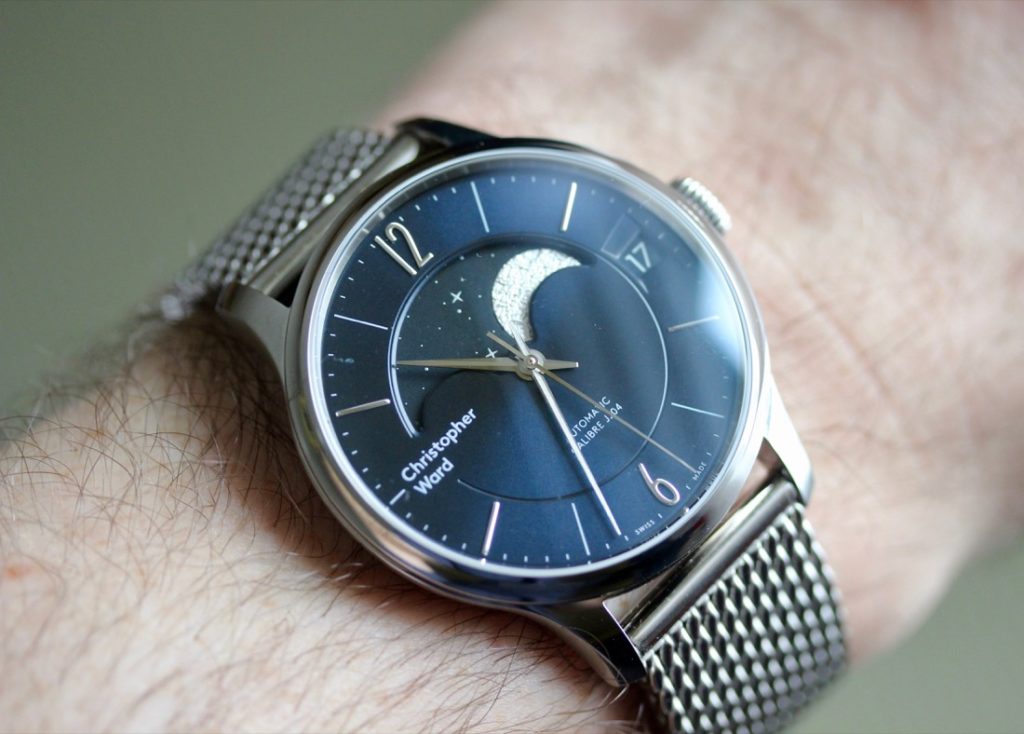 On the technical side of things, the Christopher Ward C1 Grand Malvern Moonphase is leveraging an ETA 2836 movement with its JJ04 module to enable the moon phase movement (and setting). In practical terms, this means the stock date disc (and its springs) are pulled out and replaced with four more wheels to get the smooth movement of the moon, along with another two for setting things (and, presumably, for the attendant date display). It’s worth noting two things about the moon in this watch. First, it has quite a bit of detail, stamped out in nickel with all manner of craters. Second, we need to talk about how the moon moves. 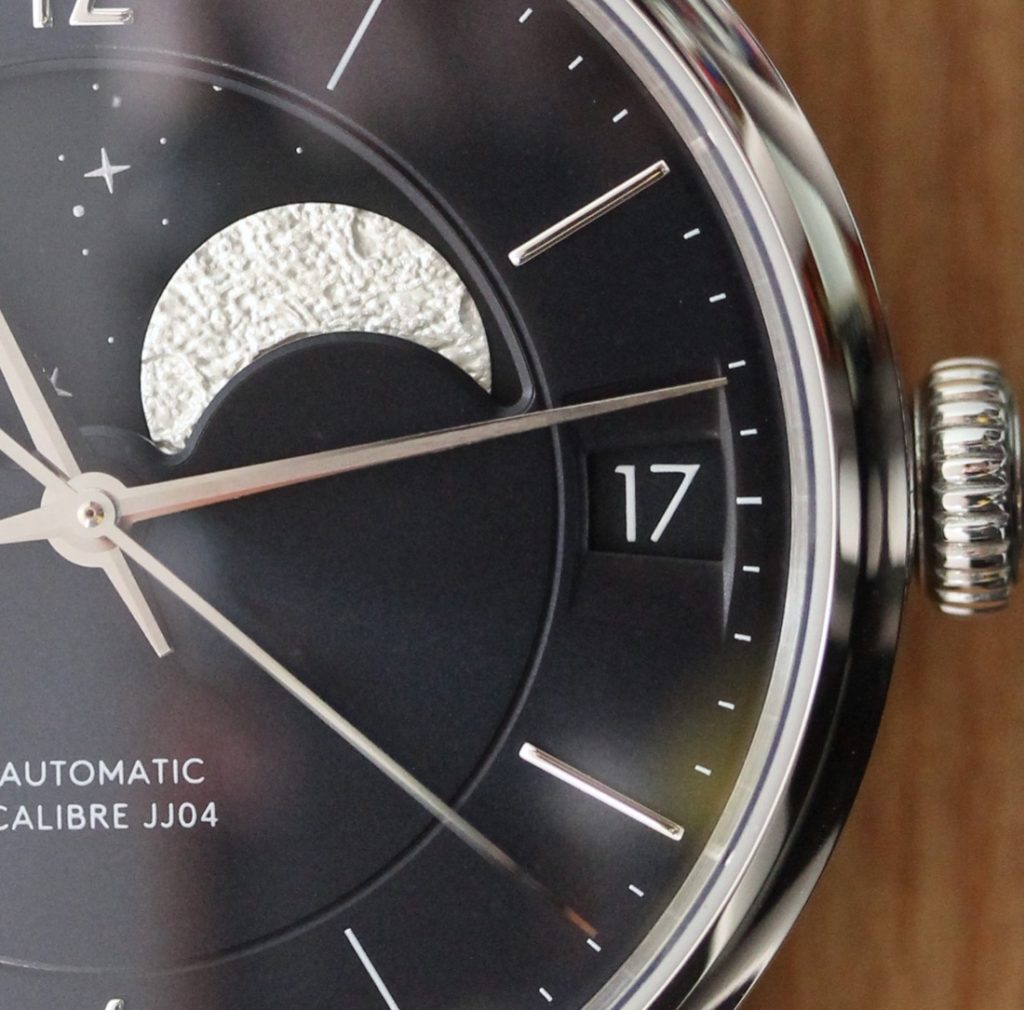 In many moon phase watches, the moon will move one “click” per day, just advancing much as the date disc would. The Christopher Ward C1 Grand Malvern Moonphase has a slow and steady progression over the course of 24 hours, waxing (or waning) to match the phase of the real celestial body. What this means is that, once set properly, the moon (on the watch) should stay in sync with the actual moon — without requiring adjustment — for 128 years. Of course, this is really just a marketing point — depressingly, you’re unlikely to live for 128 years and probably even less likely to keep the watch running that long without interruption. Still, it’s cool to know and is particularly useful if you happen to hang around with a bunch of braggadocio moon-phase fanatics. 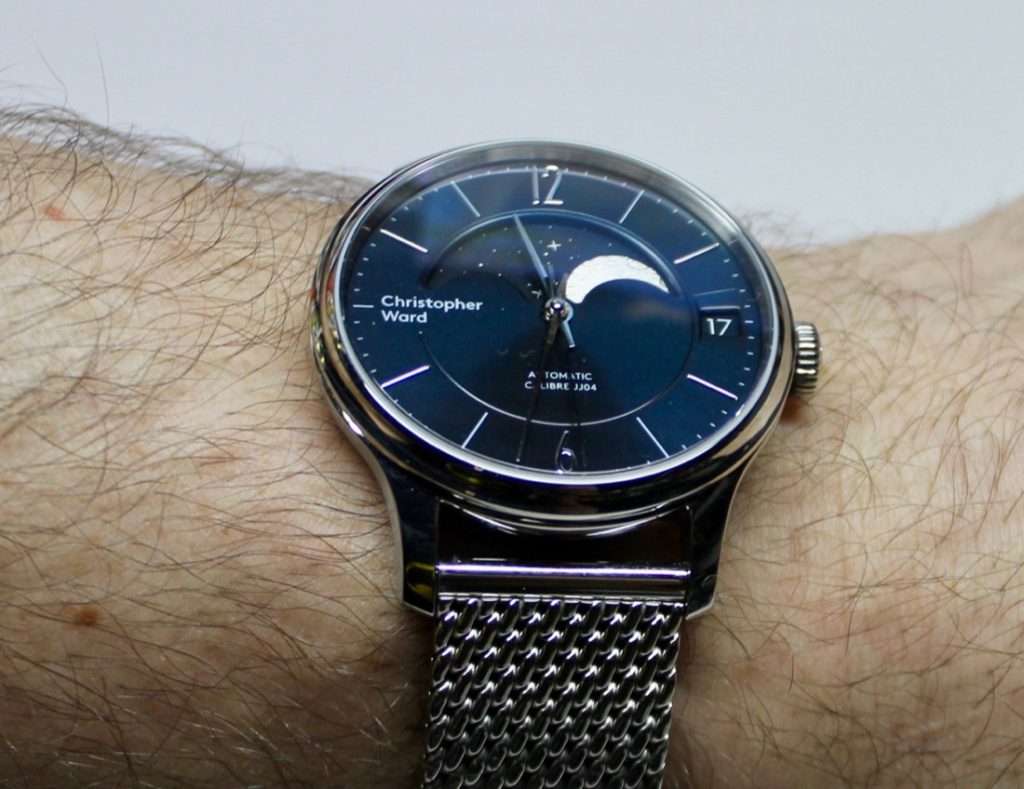 Obviously, the upper half of the dial of the Christopher Ward C1 Grand Malvern Moonphase is the star of the show, but the rest of the dial is no slouch. Our review sample was in a lovely deep blue (complete with matching date disc), offset by brightly polished indices and hands that pick up the gleam of the moon set in its star field. In the right lighting, it’s a cinch to pick out the narrow handset, as it will reflect the ambient light. If the light isn’t that great, it can be a little tricky, particularly as all three hands have similar shapes with varying lengths. Then again, that could just be my eyes. 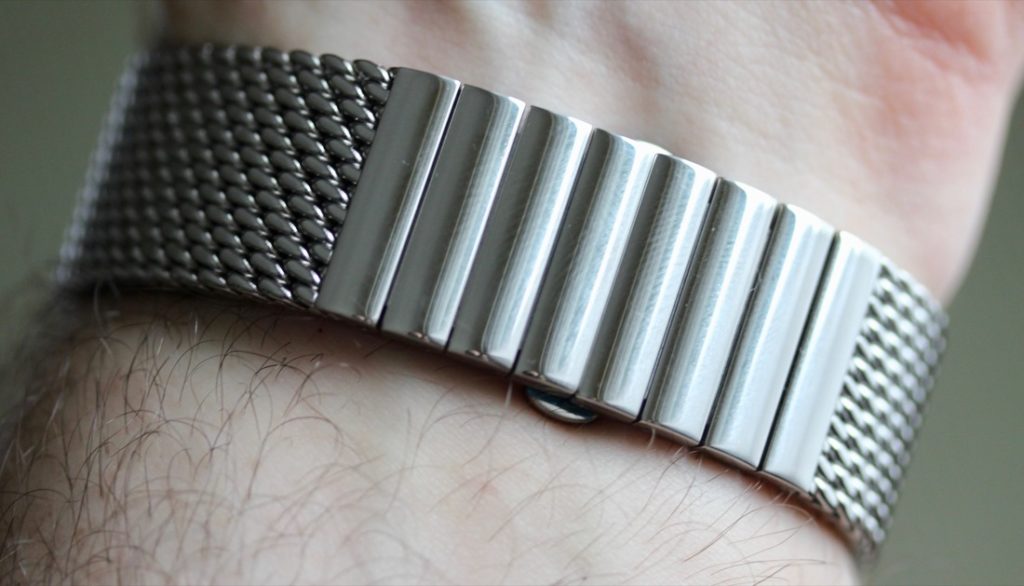 That’s just a detail — on the whole, the Christopher Ward C1 Grand Malvern Moonphase is rather easy on the eyes, particularly once strapped onto your wrist. I had been expecting the blue leather strap for our loaner and was pleasantly surprised to see the mesh bracelet come in. Not only that, it was unlike any other mesh I had ever seen. Normally, you’d have a sliding sort of a clasp that you can move along the mech to get things adjusted to your fit. Here, there are eight solid links (four on each side of the clasp) you can remove to adjust. This is an unusual, but appreciated, look. It certainly smooths things down under the wrist. It is also much easier to close than the standard mesh clasp arrangement. Additionally, it allows for a much thicker mesh to be used, giving things a reassuringly robust feel. 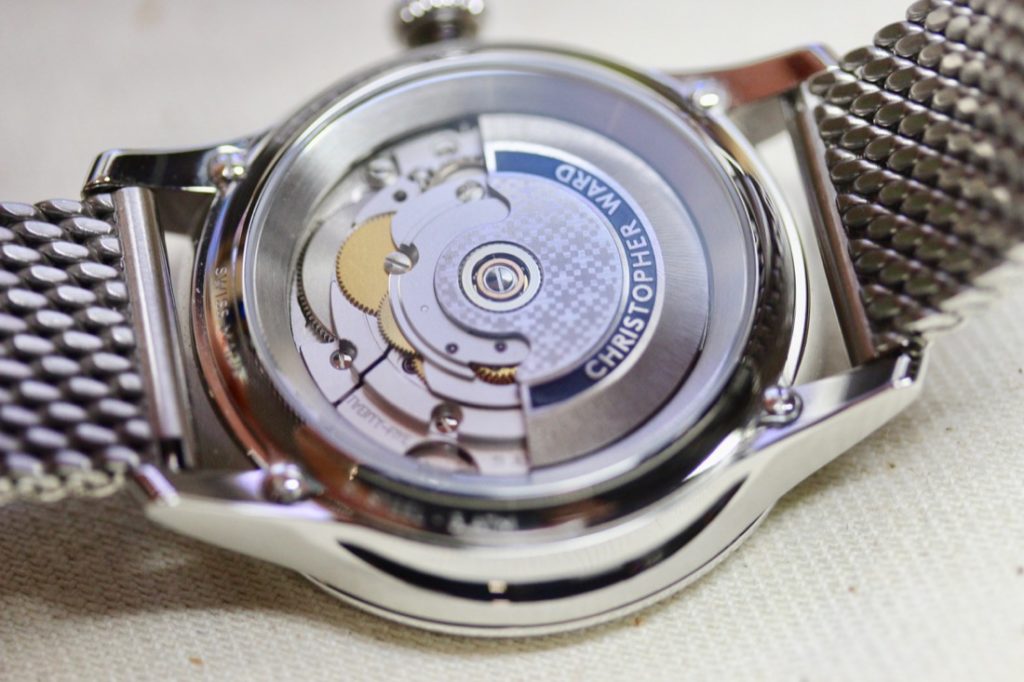 Around the back of the Christopher Ward C1 Grand Malvern Moonphase, you’ve got the expected exhibition caseback, albeit one of the nicer examples I’ve experienced. Normally, the look is simply that of a caseback that has been cut out to accommodate a window. Here, you’ve got a rather interesting chamfer going down from the edge of the caseback to where the movement is (probably also acting as a spacer ring) allowing the eye to travel naturally in to the movement. There, you can see some of the work that CW has done on the movement, along with the signed rotor. Oh, and if you want to be a CW “insider,” take note of that blue enamel stripe on the rotor. That signifies the watch is one of their JJ caliber models. The more you know! 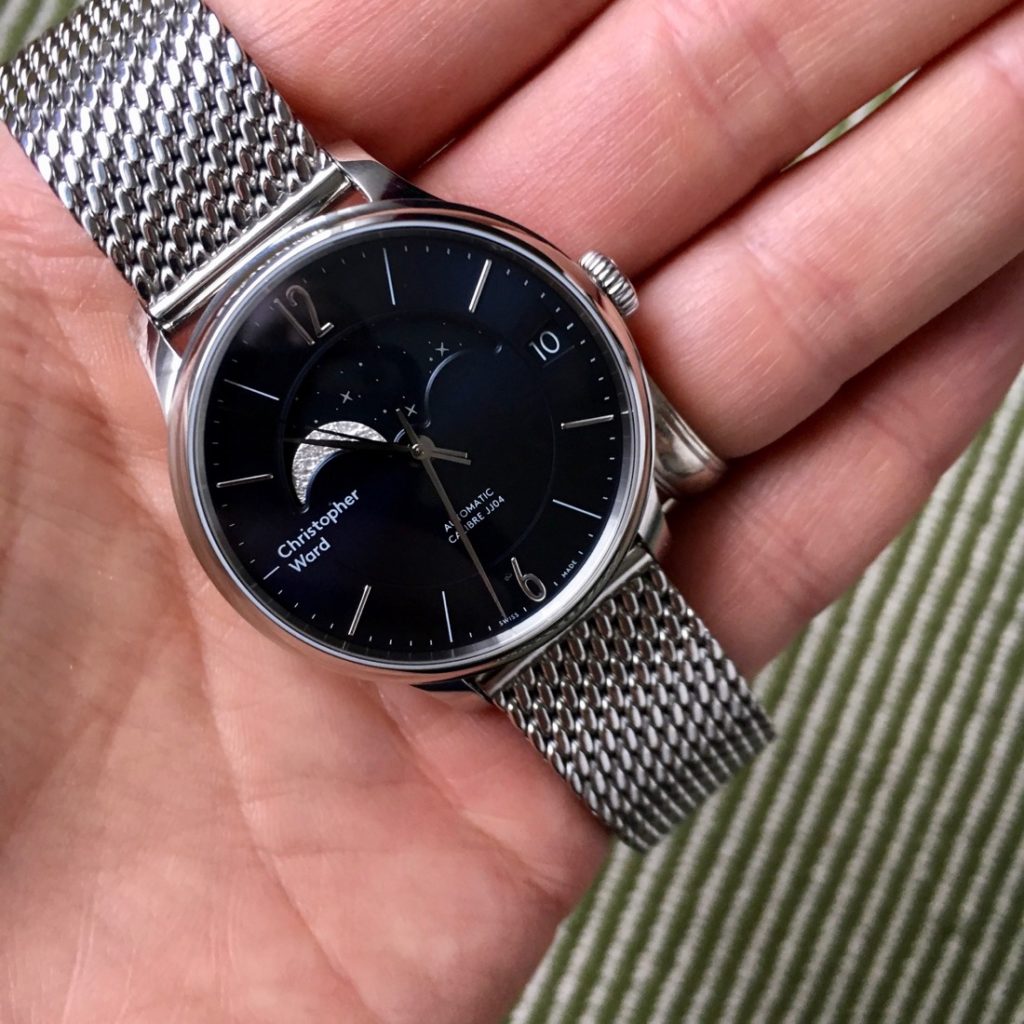 Overall, I did enjoy my time with the Christopher Ward C1 Grand Malvern Moonphase. It’s a larger dress watch, but it works as such, and it’s an everyday sort of watch to wear to the office, as well.  The moon phase complication is as stunning as it is technical, and the realistic (if a tad stylized) representation does catch the eye. If you want to check this one out yourself, you can pick one up for £1,395 direct from the brand. Learn more at christopherward.co.uk. 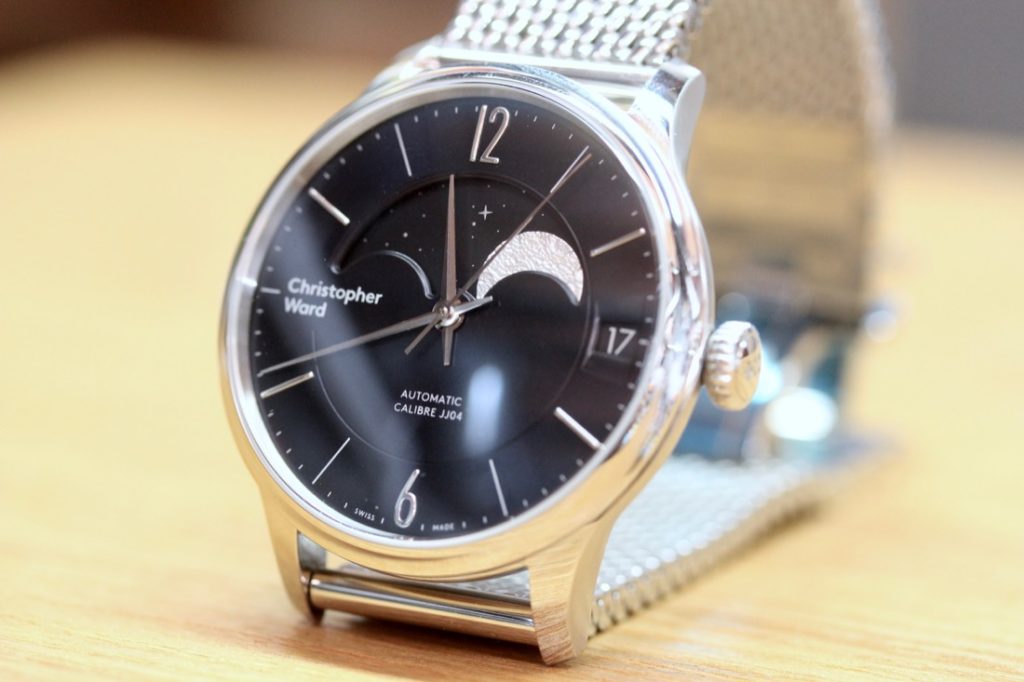 Necessary Data
>Brand: Christopher Ward
>Model: Ref. C01-40AMP1-S00B0-CB C1 Grand Malvern Moonphase
>Price:  £1,395 (~$1,834)
>Size:  40.5mm / 12.35mm thick; 48.5mm lug-to-lug
>When reviewer would personally wear it:  This is a good watch for when I’m getting (literally) suited up
>Friend we’d recommend it to first:  I have a friend who has been looking for a moon phase for a while now. This one would scratch that itch, as well as give him a stylish and low-key dress watch that’s big enough to wear casually, too.
>Best characteristic of watch: Here, it’s two things that go hand-in-hand.  First, it’s that moon. I really dig it. Second, it’s how the deep blue and shiny silver tones work so well together.
>Worst characteristic of watch: The handset. While uniformity in shape keeps the design cohesive, they are so thin — and relatively close in length — that it can be an exercise to tell them apart in poor lighting conditions.
Tech Specs from Christopher Ward
Advertising Message