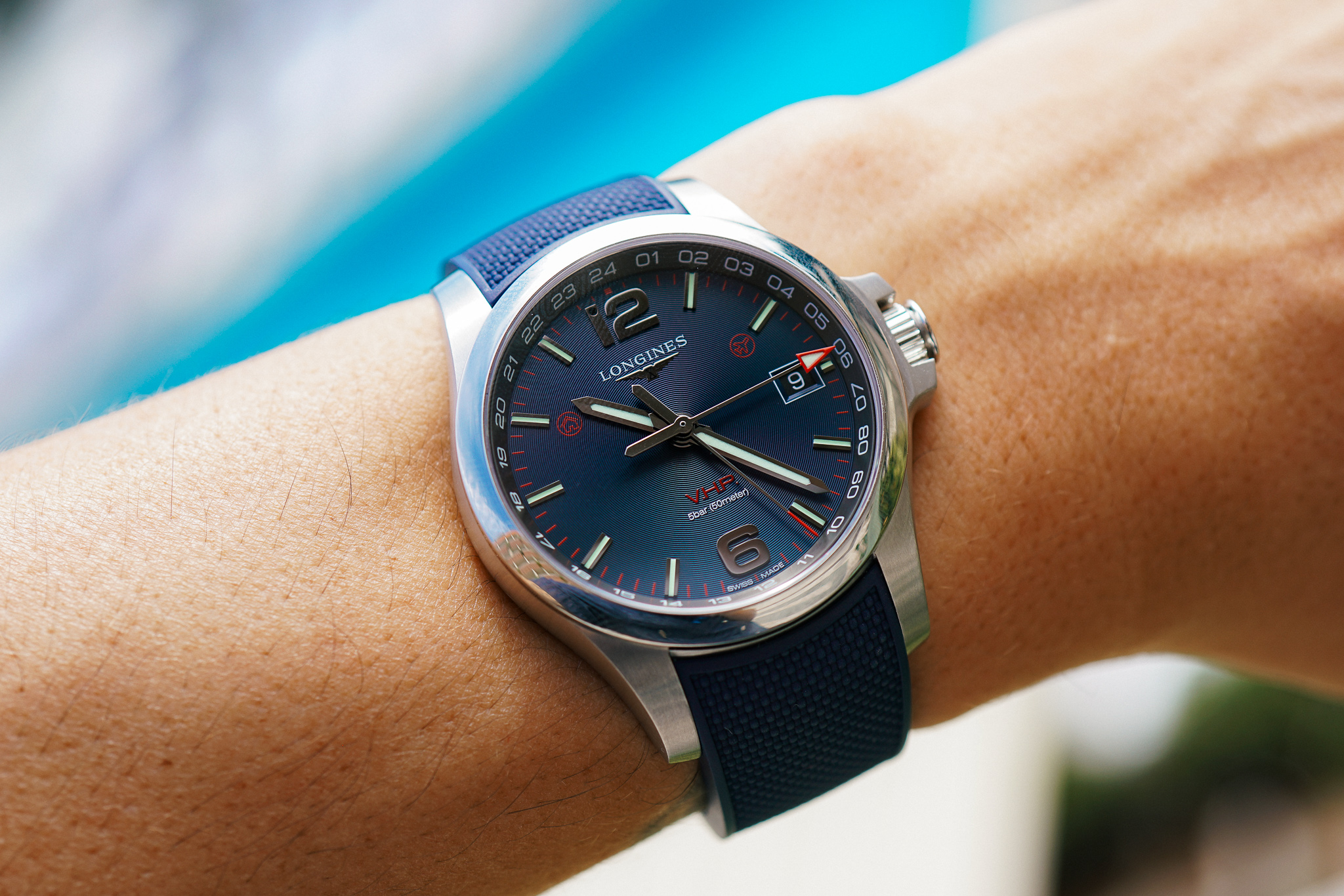 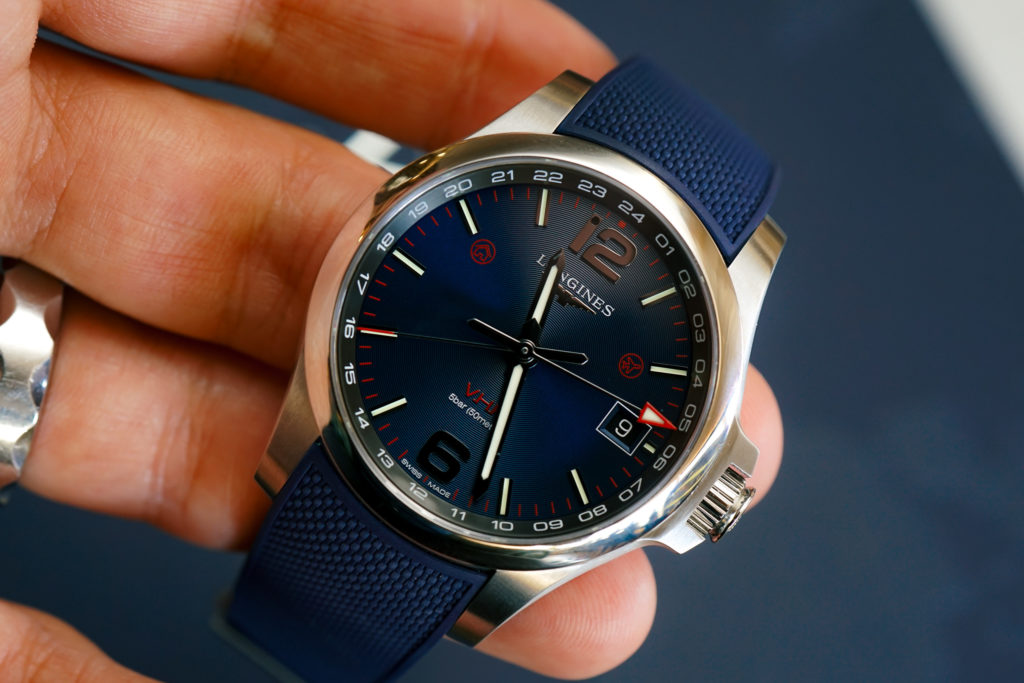 What’s the first thing you do when you step off a plane? Check your phone. Fire off a few text messages. Maybe check your Instagram feed. And with the new Longines Conquest V.H.P. GMT Flash Setting, you’ll quickly set your watch to the new time zone – a step that takes two quick clicks of the crown somewhere between the aforementioned, resulting in the hands zipping around the dial to the correct hour in admittedly satisfying fashion. But the real party trick here, and what makes this new V.H.P. truly groundbreaking stuff beyond its impressive accuracy, is how the watch records and saves ‘home’ and ’travel’ time zones. And the hint is right there in the name of the watch itself, “Flash Setting.” Spoiler alert: while clever, the V.H.P. GMT is not a smart watch by traditional definition – it’s 100% analog, with no Bluetooth connectivity at all. The secret sauce lies in a centuries-old communications medium that should make your inner scout leader proud: Morse Code. 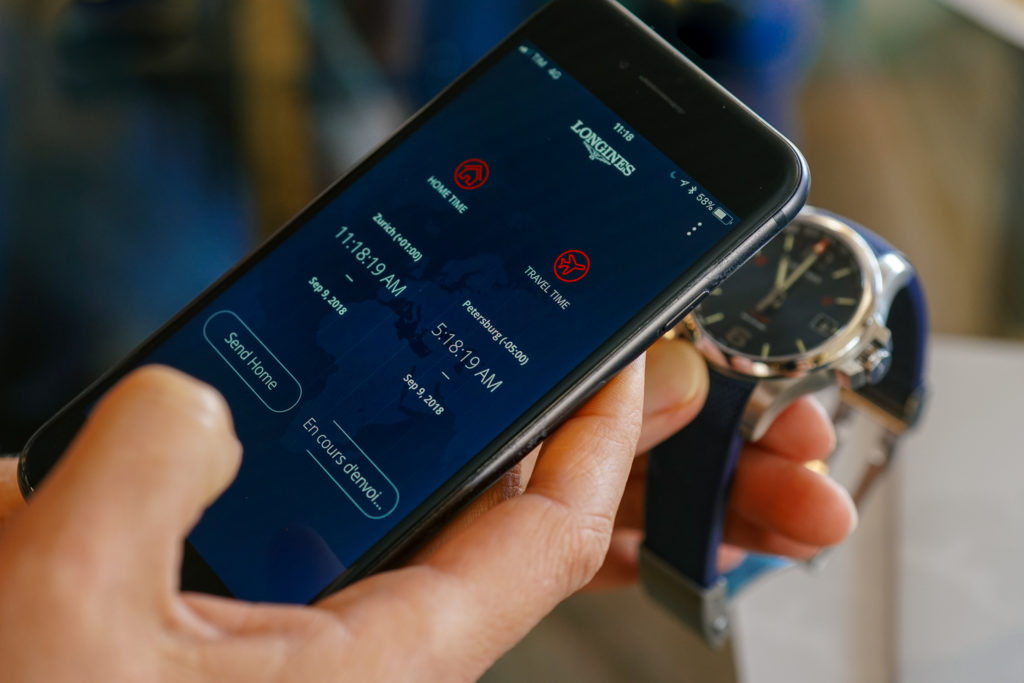 So when I heard that Longines was preparing a sequel to 2017’s impressive V.H.P. high-accuracy quartz (a subset of quartz watches collectively referred to by the community as “HAQ”) designed specifically for travelers, I had to know more. Convenience and ease of use when on the move is, after all, king, right? However, I couldn’t help feeling a little like Longines buried the lede on an innovative new proprietary movement. Yes, the watch’s most unique feature – the “flash setting,” is right there in the title. But the speed and ease of setting is only half the story, because the literal interpretation is the actual punchline: the V.H.P. GMT Flash Setting lets you synchronize multiple time zones via a smartphone camera flash, which communicates the time to the watch’s dial using bursts of light in the form of old-school dots and dashes. Seriously. 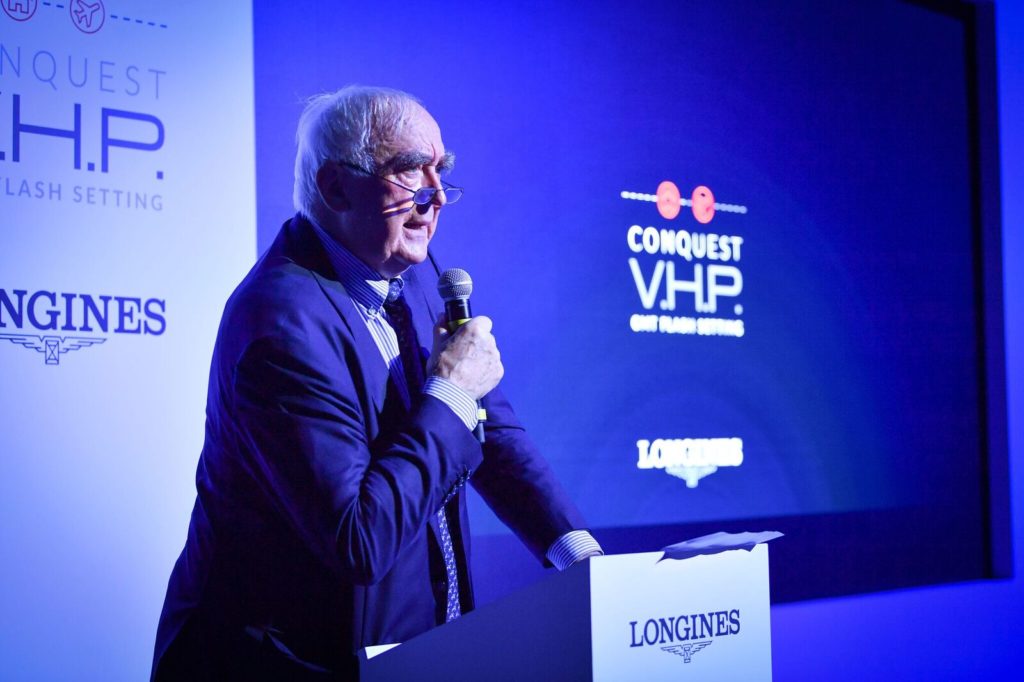 At the launch of the new Conquest V.H.P. GMT, Longines CEO Walter Von Känel restated his position of having no interest in creating a fully-fledged smartwatch. But the brand needed a movement that could expand upon the legacy of technical innovations within the V.H.P. line, without directly competing with purebred technology brands – a move that could ultimately compromise Longines’ commitment to the slower-paced traditions of classic Swiss watchmaking. They found their answer in the V.H.P. Flash Setting, a quartz movement that took ETA four years to develop, which adds a high degree of globetrotting utility to the original V.H.P. (Very High Precision) caliber released in 2017. It’s important to note that this new ETA calibre is exclusive to Longines, and while Von Känel played coy about allowing a growing number of interested brands access to the movement, it did seem that he’s keen to keep it in the family. For now, at least. 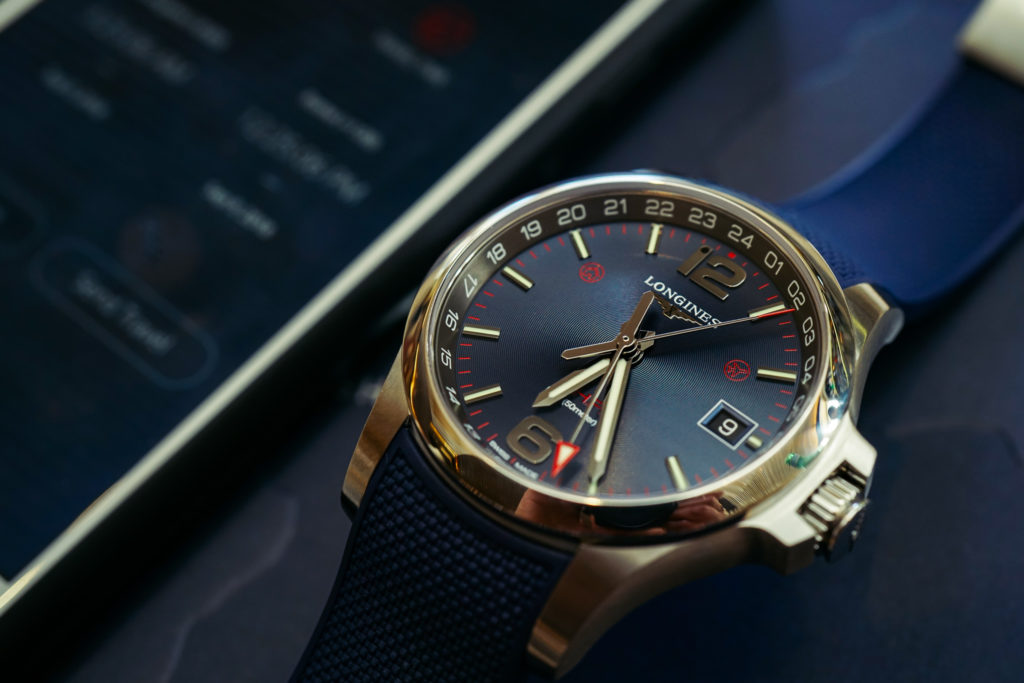 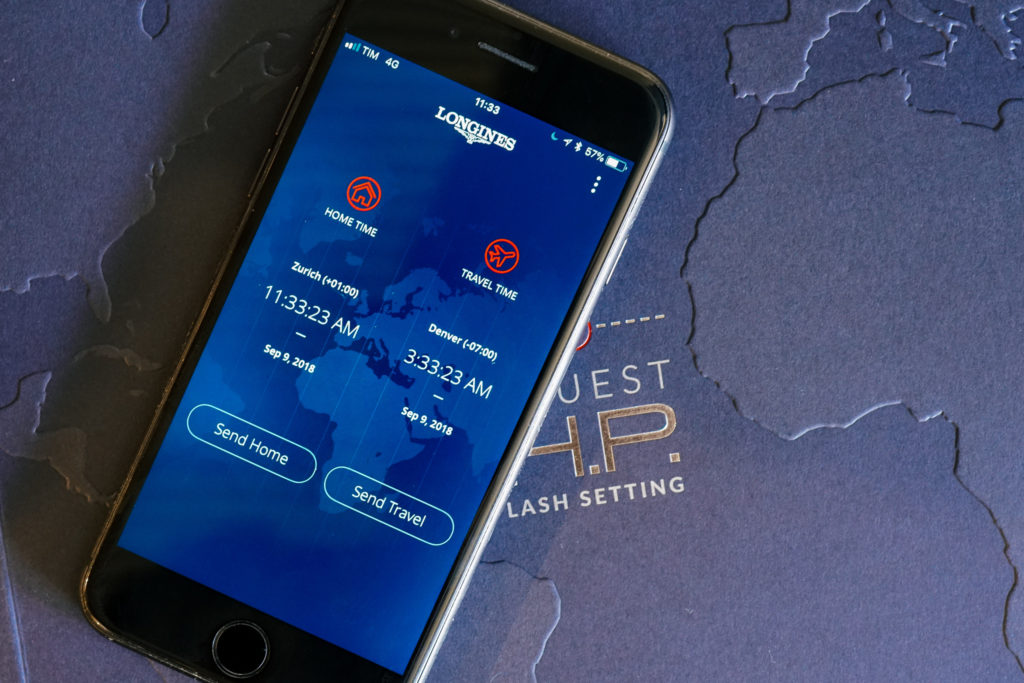 Despite the core functionality being reliant upon the new Longines smartphone app, the operation of the V.H.P. GMT is still pretty simple. First, you select two city references via the app from the column for ‘home’ and the column for ‘travel’ (your destination, essentially). And the app does have all 40 of the world’s time zones – including a few unique zones adjusted for 15 and 30-minute offsets. But rather than pairing the watch directly with the phone like most connected devices, the interaction is only top-down. To save your chosen zones to the watch, simply point your camera at the dial and press ’Start’ on the app, which quickly translates both times to Morse code, then rapidly fires the camera flash in a sequence of dots and dashes. Those signals are then read by a light sensor hidden inside the tiny aperture in the ‘1’ at 12:00 on the dial. Once fully transcribed (it only takes a few seconds), the seconds hand flicks to the “home” indicator at 11:00 to acknowledge the new time received, before the hands automatically whiz around the dial to the correct position. Two clicks of the crown cycles the entire time display between home and travel times, and a single click briefly jumps the seconds hand to either the ‘home’ or the ‘travel’ marker (at 2:00) on the dial, letting the wearer know which time is currently being displayed. 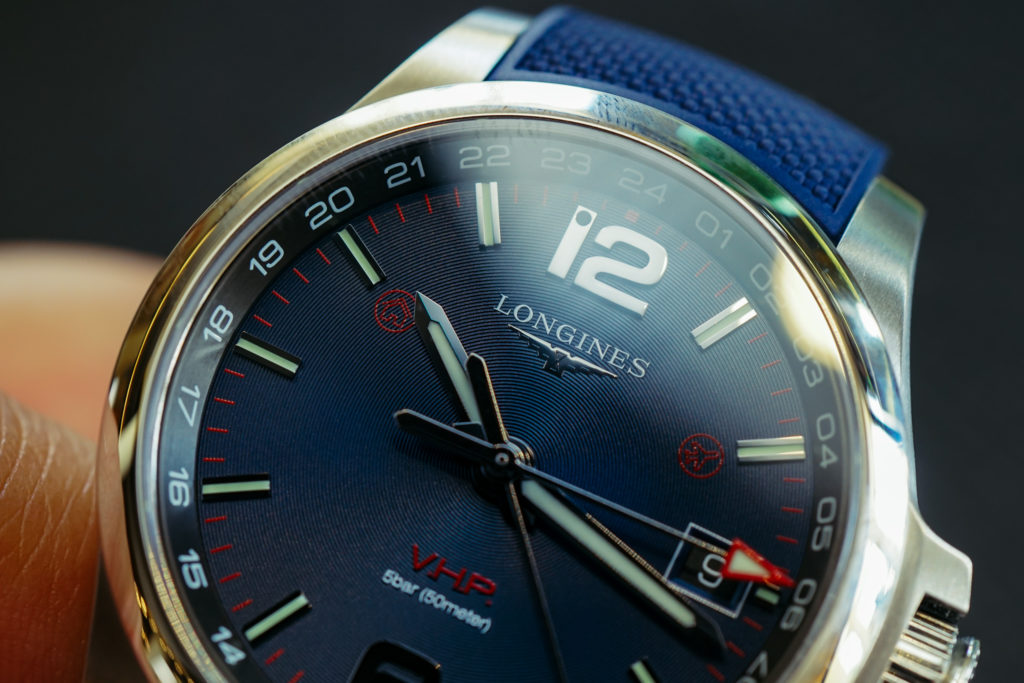 What’s particularly cool, is that since the watch saves both times indefinitely, if you’re regularly traveling between specific time zones (ie: New York and London), there’s no need to perform the flash setting every time you travel – just two quick clicks of the crown when you land, and the watch does the rest. Of course, with multiple connections, or a multi-city travel itinerary, you would need to perform the setting of two new times at some point during your trip, but the whole process takes all of just a few seconds, and is far from an inconvenience no matter how short your connection might be. As noted in the name, the new V.H.P. is also a proper GMT watch, so you have two persistent time displays – one in 12-hour, and one in 24-hour formats, always at a glance. 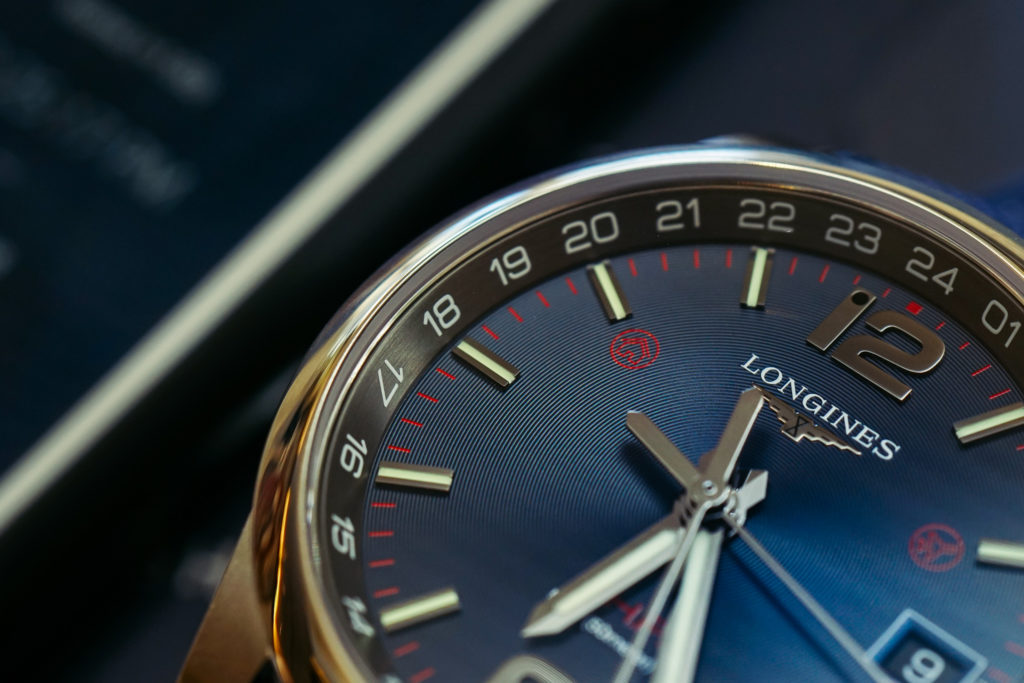 The real beauty of the GMT Flash Setting is that it’s a fully modern, digital device that borrows the same language used by turn-of-the-century maritime navigators sending ship-to-shore signals with sound, lamplight, or electric torch, yielding a highly practical, innovative solution, but one that’s still deceptively simple and oh-so-very-Swiss in this application. I particularly appreciate how despite the technical nature of the app integration itself, there remains a genuine analog charm and lo-fi novelty that’s notably absent from many connected, or Bluetooth-enabled watches. Of course, a traditional time-setting option exists for the purist – the watch can still be set and operated sans-phone via the crown, essentially future-proofing it for operation for as long as the watch is running. 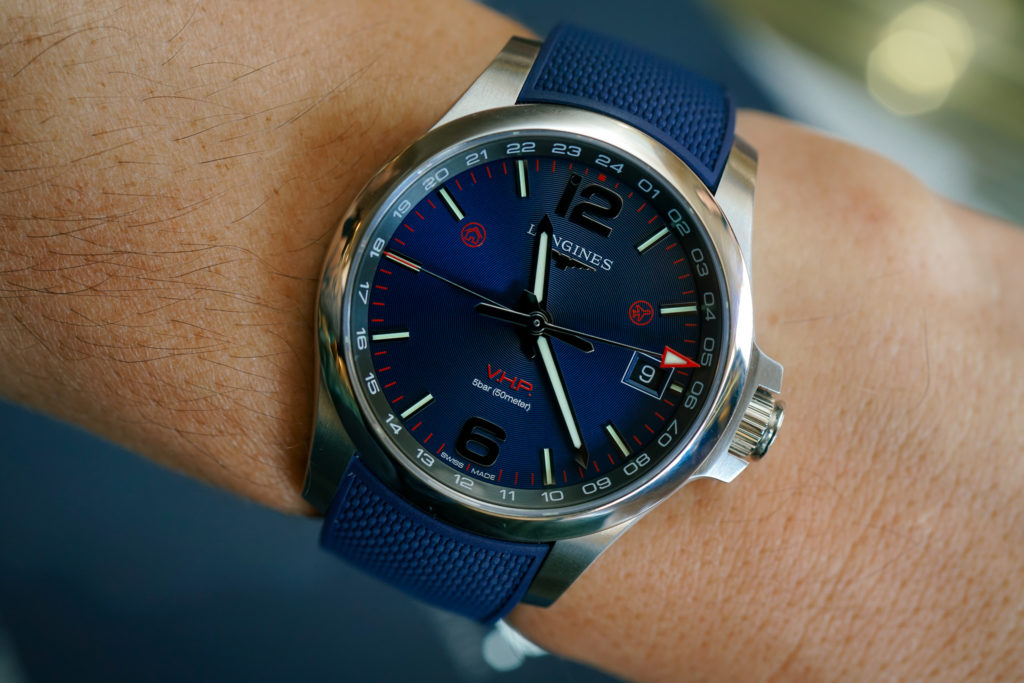 The new Longines Conquest V.H.P. GMT Flash Setting isn’t just a groundbreaking release from its novel setting features, it’s also an extremely precise watch, maintaining the impressive +/- 5 seconds per year accuracy of the standard thermocompensated V.H.P. released in 2017. It also adds in an anti-shock countermeasure that automatically repositions the hands after an impact (Casio has similar technology in its Master of G collection G-Shock watches), is unaffected by external magnetic forces, and maintains a perpetual calendar through 2399. It’s worth noting that ultra-accurate thermocompensated quartz movements, like Longines’ ETA-developed V.H.P. caliber, are a bit of an enthusiast’s niche, but they’re not exclusive to the brand. Other notable competitors would be Grand Seiko’s 9F quartz, Breitling’s Superquartz movements, or Citizen’s Chronomaster collection. Fellow Swatch Group member Certina also remains committed to affordable high-accuracy quartz watches with the Precidrive. However, the dual-timezone feature that’s now exclusive to Longines puts this watch in a HAQ league all its own, and adds in a genuinely useful wear experience that should be appreciated by more than those who obsess over accuracy. 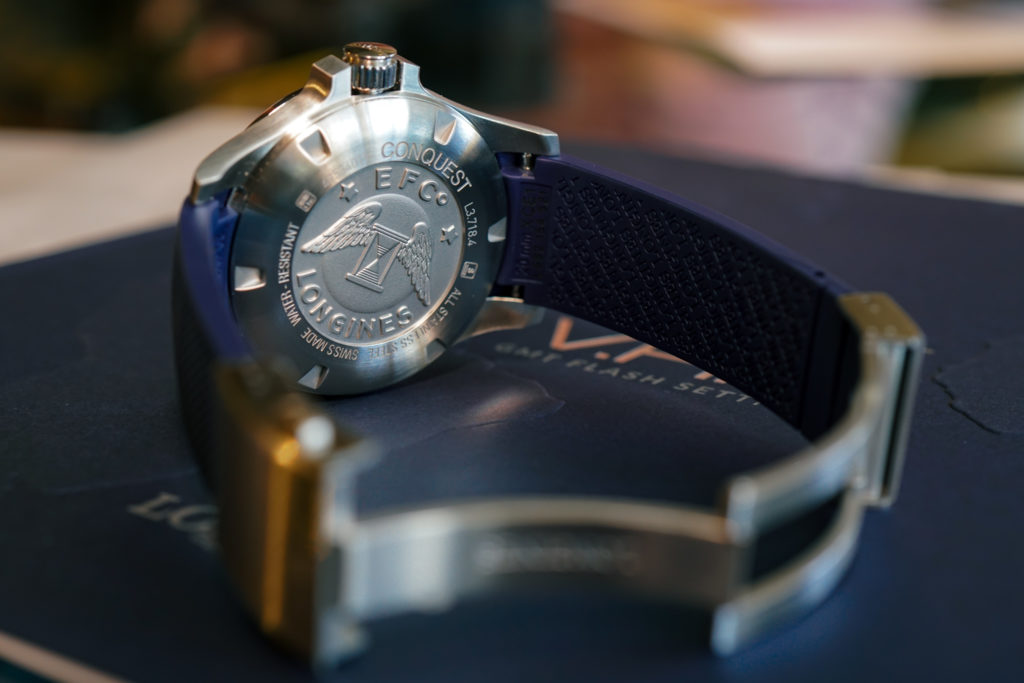 Suffice to say, I’ve been waiting a long time for a watch that delivered an elevated level of convenience and capability that only the digital realm could provide, but still one that wasn’t fully divorced from the everyday charm of a classic analog watch, and wouldn’t be fully obsolete after two years. I wouldn’t consider it an accident that one of my most-worn watches in the last 18 months has been an ani-digital quartz watch, whose only crime has been one of remarkable consistency; always at the ready, and near-perfect timekeeping (it is thermocompensated, after all). Convenience might be king, but so is utility and real-world practicality – and when watch brands pursue innovation in these areas, everyone wins. 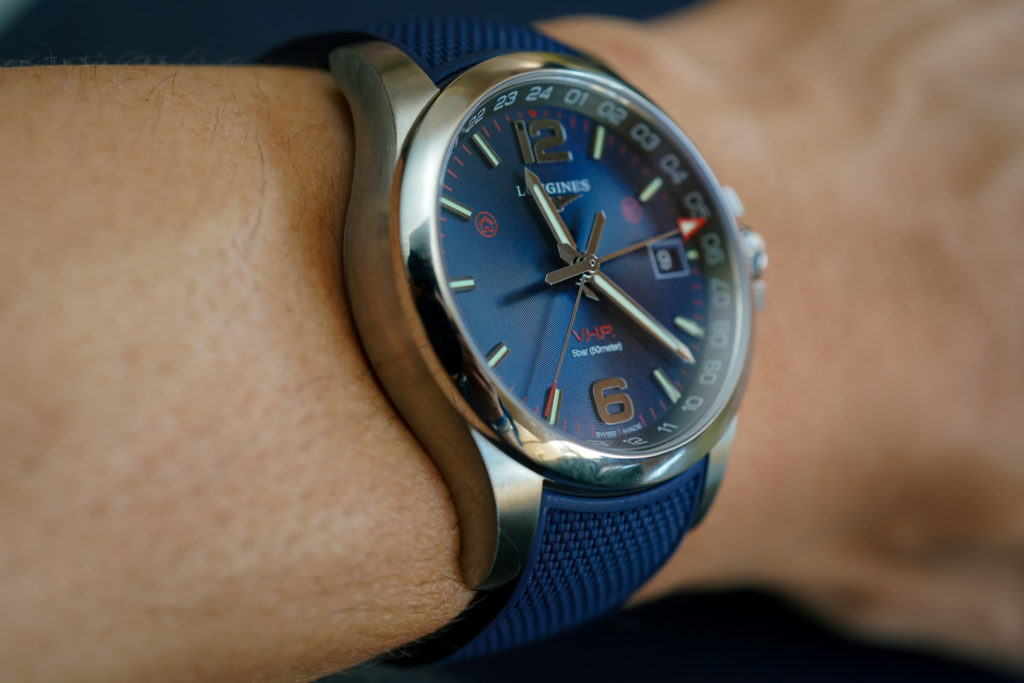 Perhaps best of all, is how despite the new movement, the Longines V.H.P. GMT remains eminently wearable, maintaining the 50m water resistance and modest case proportions of its standard 3-hand variant: in both 41mm, and 43mm case sizes. Also like the 2017 edition, are the four nicely finished dial options: silver, blue, black with radial guilloche, or carbon fiber, and on either a rubber strap or stainless steel bracelet. The price for the Conquest V.H.P GMT starts at $1,350 on the rubber strap (a $350 premium over the standard 3-hand VHP variant), and jumps to $1,750 on bracelet. longines.com