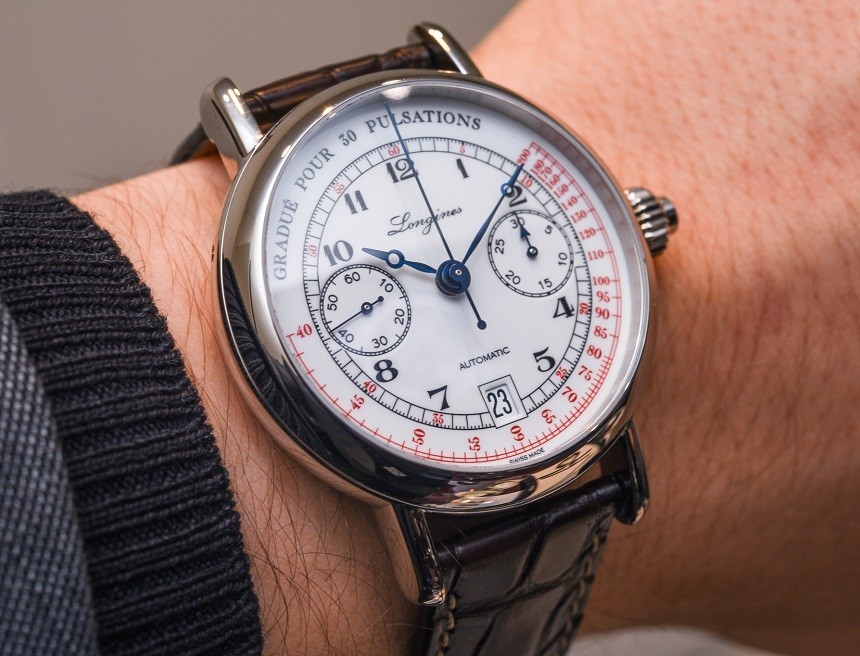 Longines is treating us to the modern interpretation of a classic by reissuing the Longines Pulsometer Chronograph for 2015. This watch stands out immediately for its retro-styling and eye-catching dial that features an unusual chronograph scale. A tachymeter, used for measuring speed over a known distance, is a common chronograph scale seen on sports watches. There are, however, other types of scales that look more at home on the face of a dress watch. For a beautiful example, we need look no further than the Longines Pulsometer Chronograph, a reissue of a watch once used by medical professionals to test a patient’s heart rate. 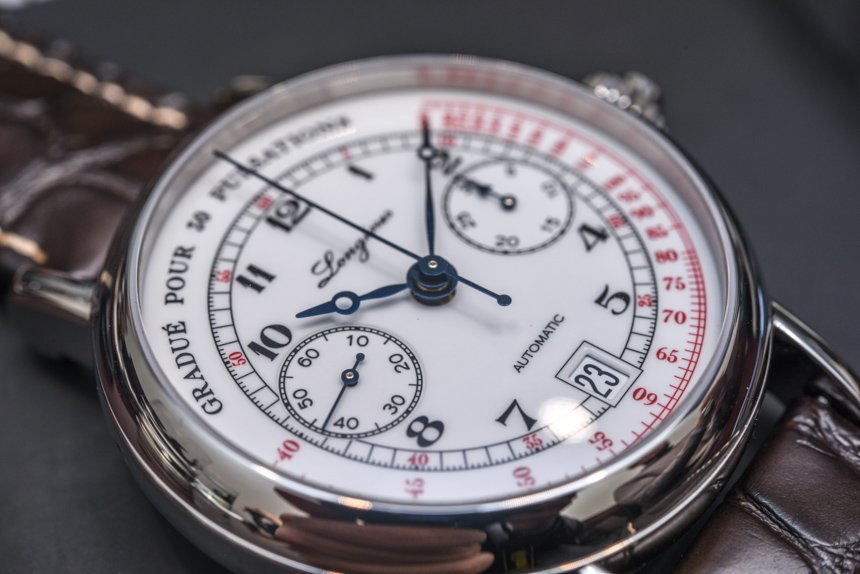 The design of the Longines Pulsometer Chronograph is based on a watch from the 1920s. It is an incredibly handsome piece, putting its faith in bold, contrasting colours used sparingly on a crisp, white, lacquered dial. The Breguet-style blued steel hands look really bright against the clean background, and the quality of the dial printing in black and red means this watch remains legible and seemingly uncluttered despite having an awful lot of information displayed in a small space. 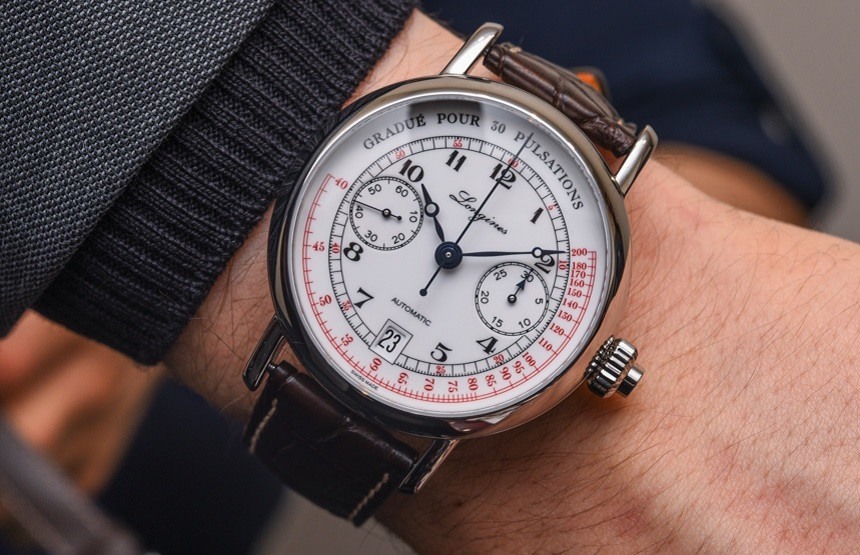 What makes this watch so elegant is the scaled-back design. Wherever possible, the designers have removed extraneous components (like the pushers) and left clear space clear, resisting the temptation to fill every bit of this well-weighted dial – no redundant lines of text or other nonsense. This is a functional tool watch designed for those in the medical trade. There is no need for luminous hands or dial markers, so they have been removed. The chronograph counter must be eminently legible so the 3 and 9 hour markers have been removed entirely to give the sub-dials appropriate space, and the 6 o’clock marker gives way to a useful date window. 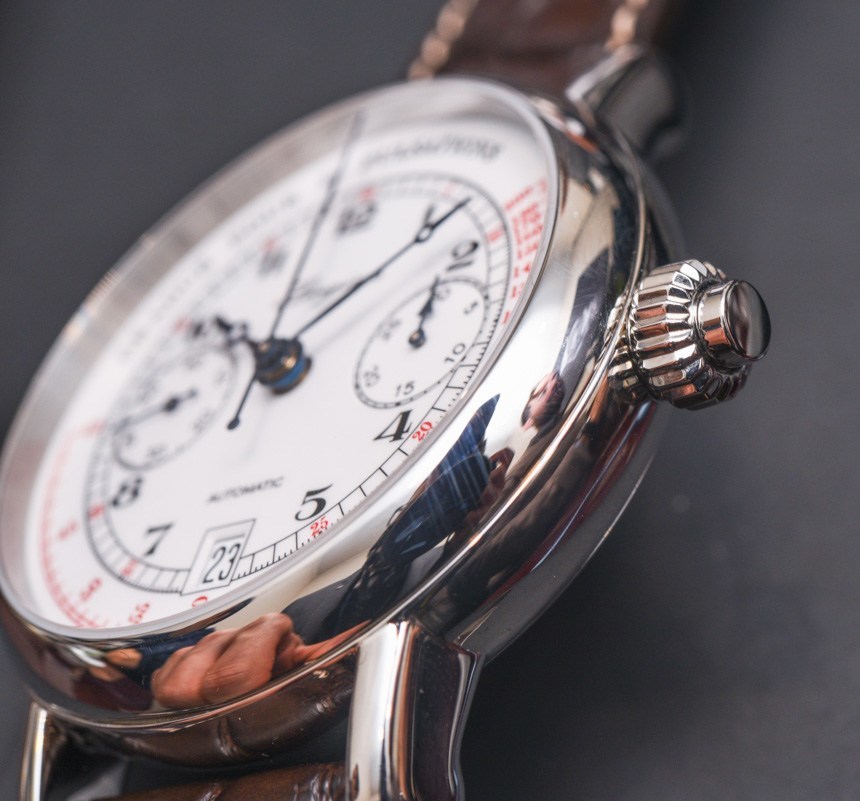 From a physical perspective, the Longines Pulsometer Chronograph is tailored for its target audience. It is smart and simple, made of stainless steel, is water resistant to 30 meters (which is enough for a medical professional, who is unlikely to be going any deeper than the sink), and is on the svelte side for a chronograph with this movement. Measuring 40mm across, not including the larger crown/pusher at 3 o’clock, this watch is designed to fit under a shirt sleeve and not to grab your attention. Its beauty comes from its quiet confidence in a brilliant marriage of form and function.

From a classical perspective, it would have been nice to see the dial enamelled, but it is true that would have imposed a higher price tag. Apart from that, I find it hard to fault this impressive vintage revival. The colour palette of the Longines Pulsometer Chronograph is excellent and goes well with the brown leather alligator strap, which features a stainless steel buckle bearing the Longines name and logo. The legibility of the precisely printed dial is further improved by the anti-reflective coating on the sapphire crystal. 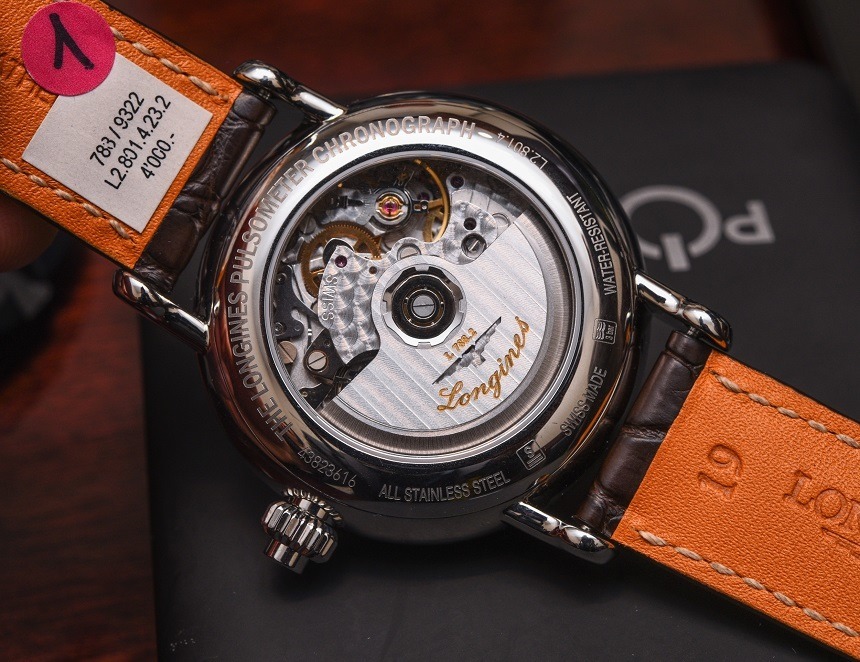 The watch is easy to use too. The time is told by central hour and minute hands, along with the running seconds hand mounted on the sub-dial at 9 o’clock. The hand-set mechanism is controlled by the crown/pusher at 3 o’clock. The chronograph function can be used as a stopwatch, with a 30-minute indicator at 3 o’clock, or as a pulsometer, by using the red scale around the outside of the dial.

To use the pulsometer function, all you have to do is start the chronograph running and count 30 heart beats. Then, you stop the chronograph, using the same pusher you started it with (which is really useful as you’ll need to keep one of your hands free to take the pulse of yourself or your patient), and the blue chronograph-seconds hand will be pointing at the correct heart rate. This is a quick, easy, and accurate way to take bpm reading, and a nice little conversation piece too. 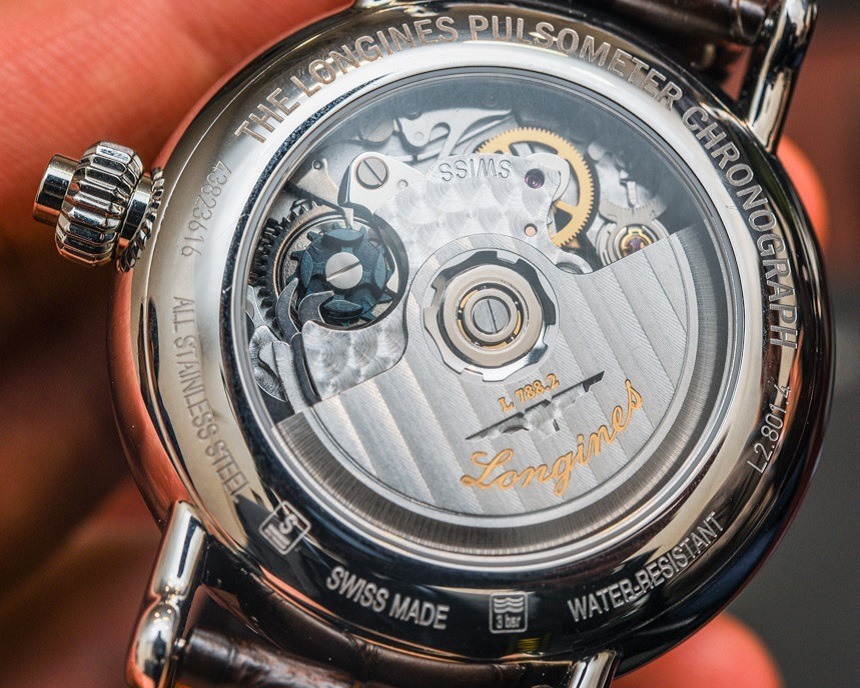 The Longines Pulsometer Chronograph features the L788.2 movement, which is a self-winding column-wheel chronograph with a 54 hour power reserve. The movement layout is that of an ETA 7750, but Longines have made a couple of major alterations to the well-known tractor movement. They have retro-fitted a blue steel column-wheel and a monopusher modification. This is a huge aesthetic improvement, but one that might raise the hackles of purists. The 7750 was never designed to take a column wheel – in fact, it was the first watch in the world to feature the cam system. Because the 7750 relies on stamped out, easy to assemble parts that were designed on a computer, it often fails to get the respect it deserves. The addition of a column wheel improves the look of the thing but, in my mind at least, is almost insulting to the merits of the movement that lies behind the L788.32. That said, Longines have done more than stick a nice component on an industry stalwart – the parts of the L788.2 are finished to a higher standard than we might expect to see on a 7750. The auto-weight has the Longines logo silhouette cut-out and the brand name in gilded letters.

If you like the look  and feel of the column wheel (the pushers feel much smoother and refined when using a column wheel in comparison to the rather impact-heavy cam system), then this is a watch you should sample. It’s a very functional watch and retails at 4,000 Swiss Francs or around $4,300. Not bad for an established brand, offering something that is likely to age well thanks to its throwback style. longines.com