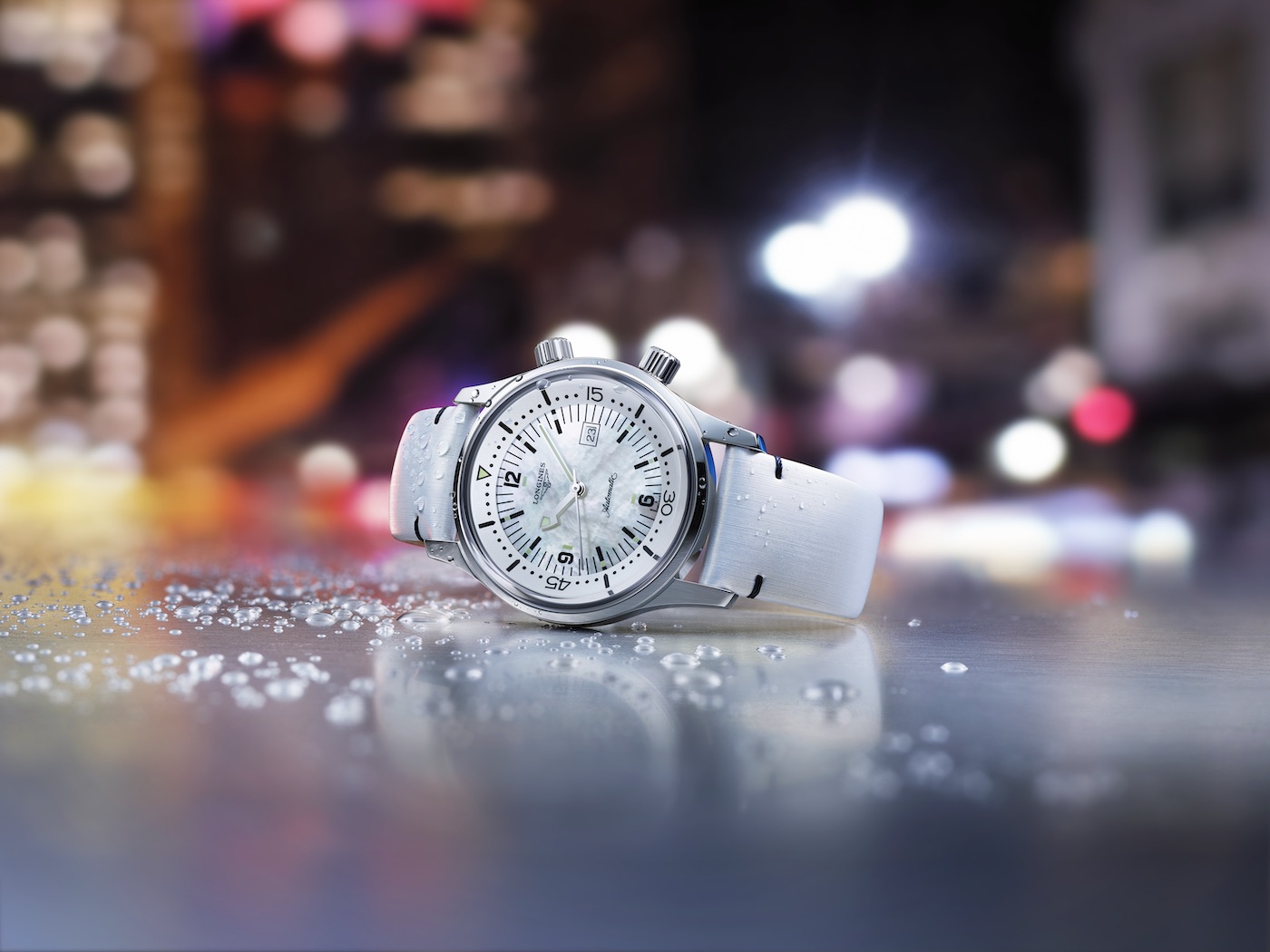 I’ve always had a soft spot for the Longines Legend Diver series. I’m a big fan of “super compressor” style cases, and the complementary, bichromatic printing appeals to my fastidious tastes. The Legend Diver collection has its roots in reference 7042, released in 1960. The first re-edition came in 2007 and was followed by an updated date version in 2009, and a PVD-coated version last year. All four releases were 42mm-wide. The Longines Legend Diver 36mm is much more conservatively proportioned and really opens up this model up to a wider audience. 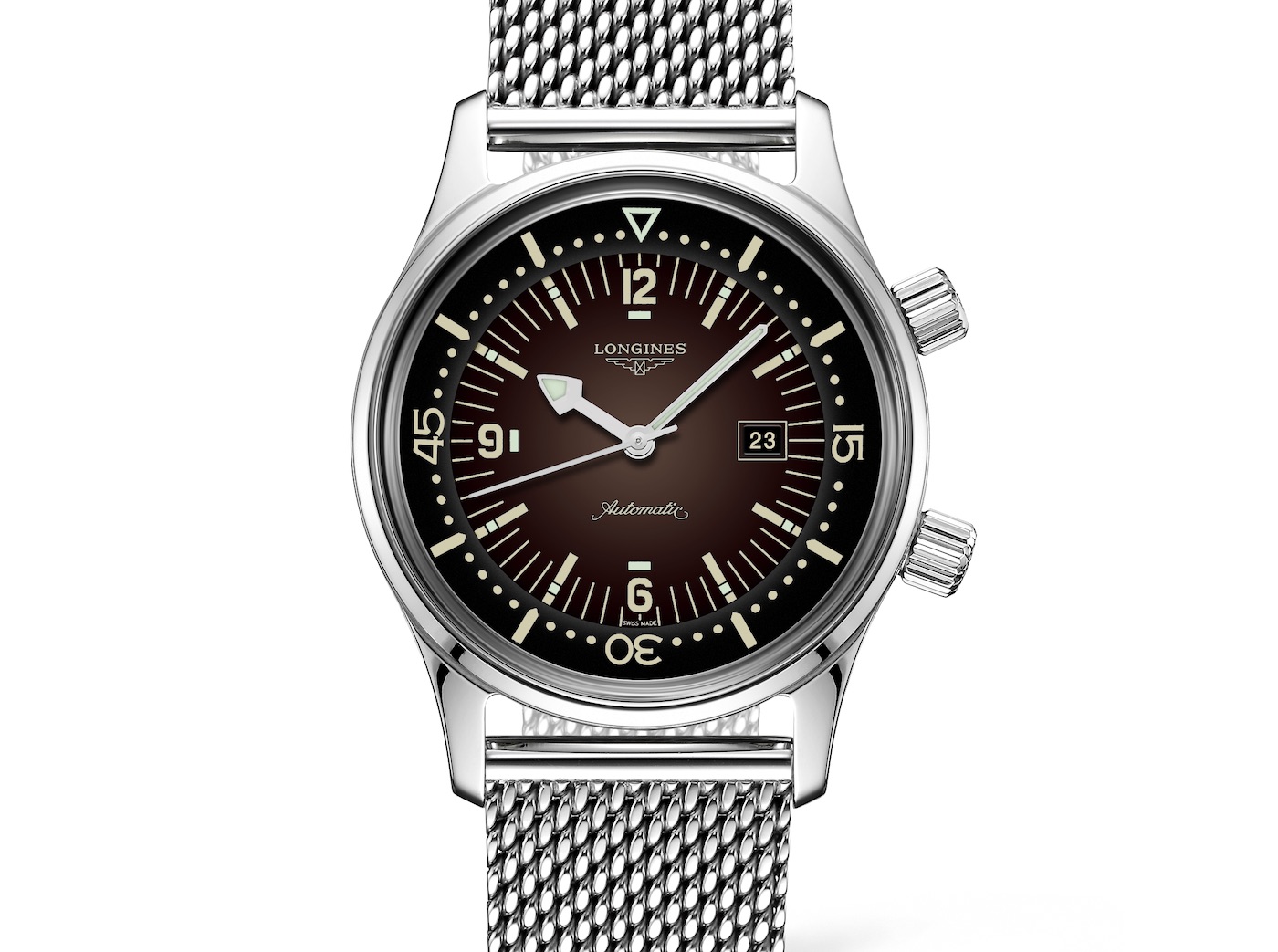 I think Longines is going to find that, despite pitching this watch as a woman-first alternative to the 42mm version, there will be an awful lot of vintage-vaunting gents in the hunt for this new model.

There is an argument for staying true to the original 7042 and retaining the 42mm case diameter, but the editions from 2007 onward sneakily bulked up the crowns, which, in my opinion, grew the watch significantly on the wrist and made it far less comfortable to wear. As someone who enjoys wearing super compressor or compressor style cases because they move the crowns into a more ergonomic position for flexing the wrist, this annoyed me. It seems likely that the smaller sized 36mm version will circumnavigate this problem with its revised dimensions. 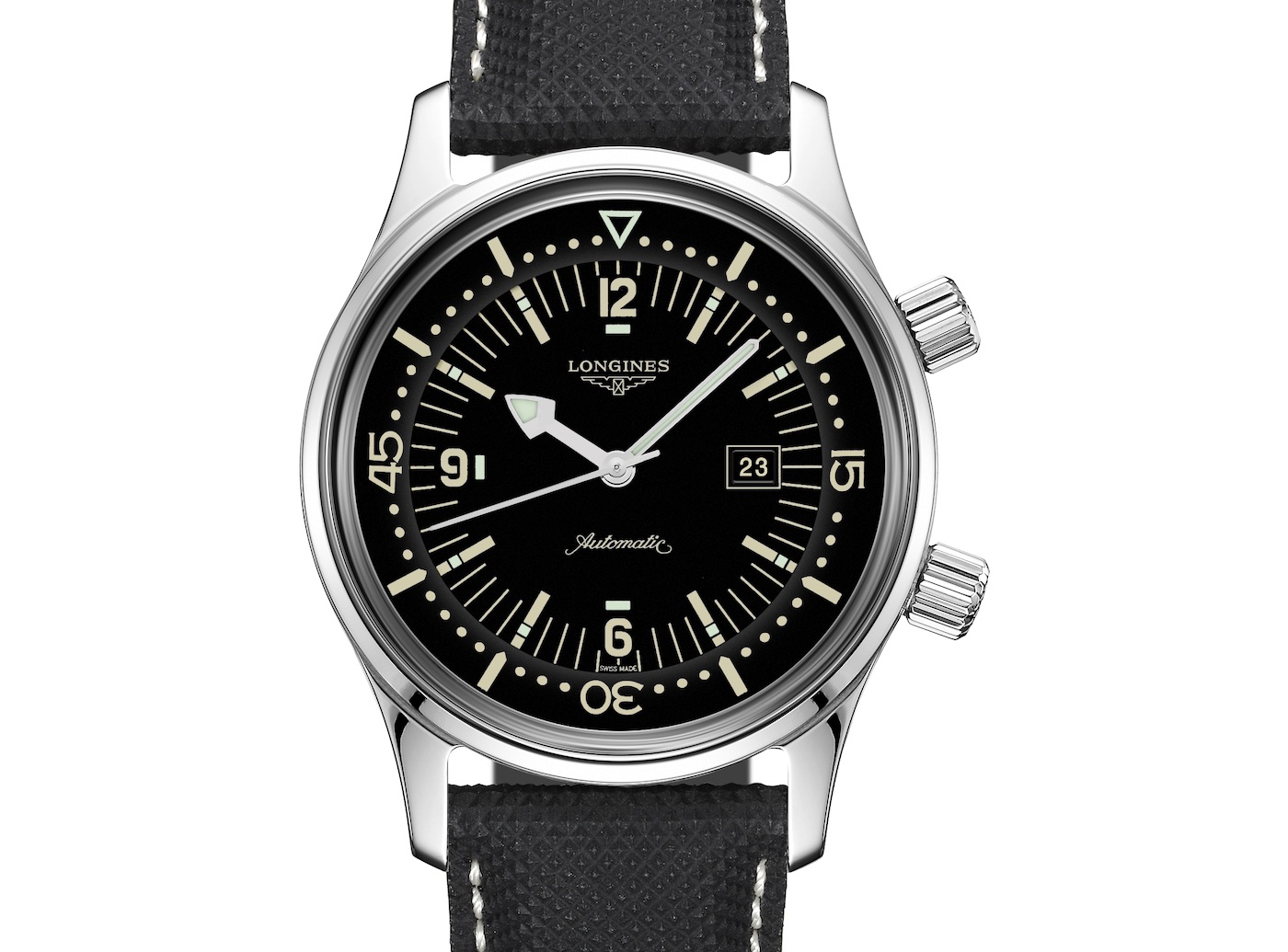 What is a Super Compressor?

The term “super compressor” is often used (erroneously) to describe any watch with twin crowns. The first watches to feature this design were fitted with special technology that meant the watches got more water resistant as the external pressure on them increased (hence the term “compressor”). The technology was a hit, but largely unnecessary for all the desk divers who just liked the look (and comfort) of crowns at 2 and 4 o’clock. That said, Longines elected to remain faithful to the original by using super compressors in their modern iterations of the 7042. 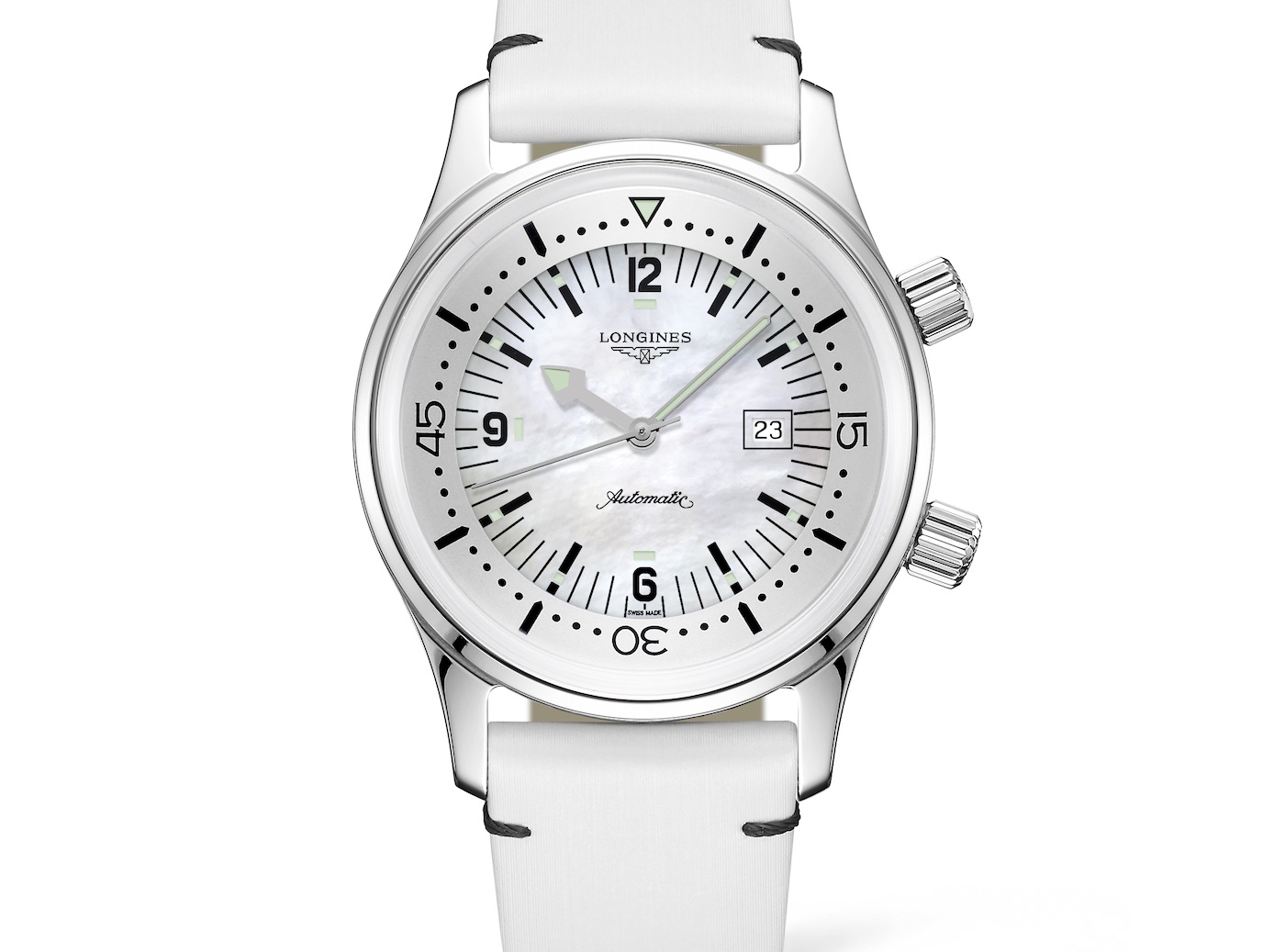 Super compressor technology was the brainchild of Ervin Piquerez SA (EPSA). It emerged in the 1950s and was popular until the quartz crisis really hit in the ’70s. A super compressor differs from a compressor by having a threaded or bayonet case back as opposed to a snap-on. When the case back is “screwed” down, it stops before it travels as far as it possibly could, due to a spring pushing back against the case middle.

At the correct tension, the caseback is depressing the o-ring gasket but not at its maximum capacity. As the external pressure builds following submersion, the caseback spring will succumb and allow the case to further depress the o-ring, theoretically increasing water resistance. One secondary, oft-ignored benefit of a super compressor case is the reduced pressure (and thus, wear and tear) on a gasket above sea level. 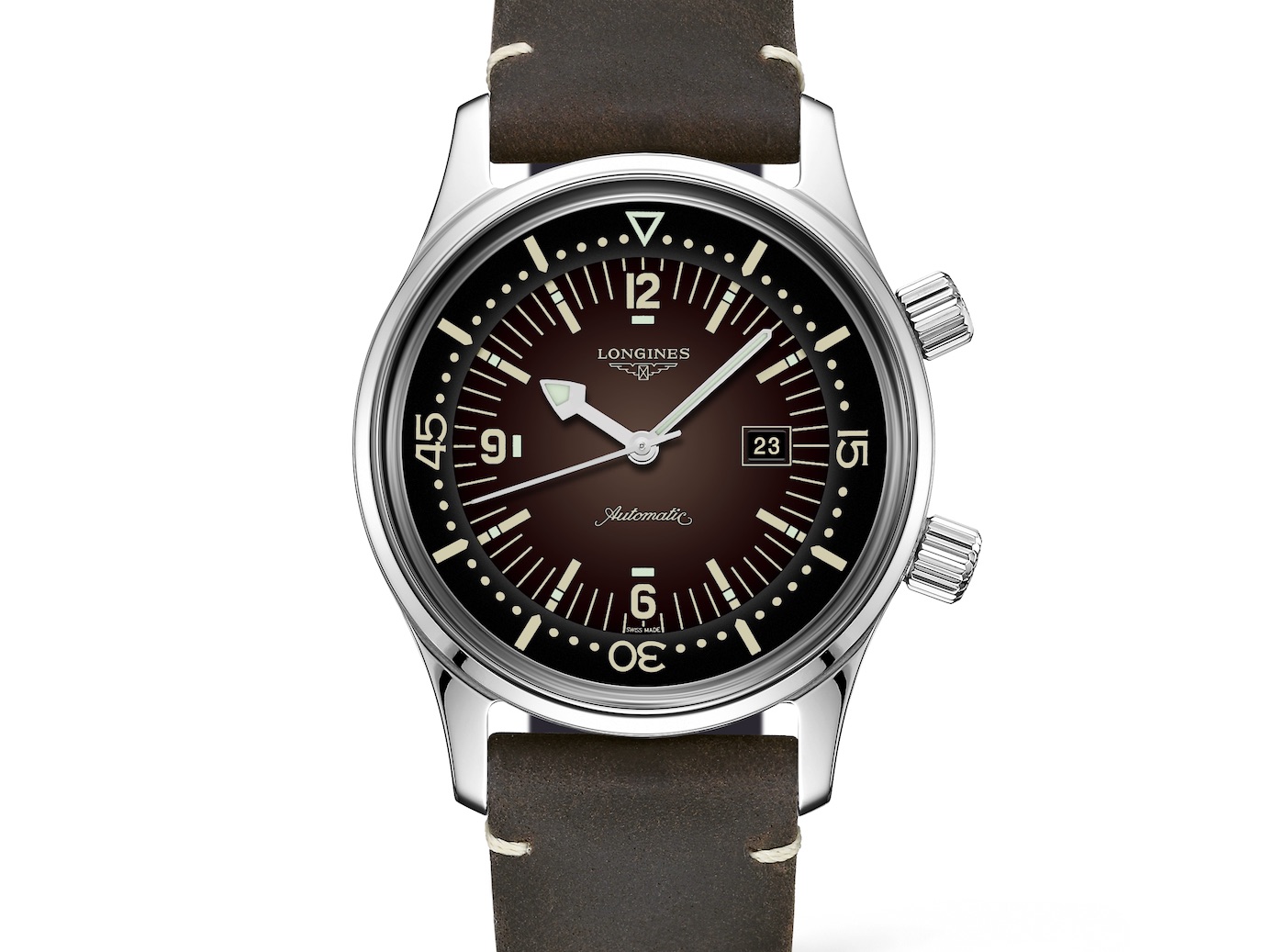 This release sees not only a reduced size but also an increased color palette for the Longines Legend Diver watches. This model is available with black, purple fumé, burgundy fumé, tropical (brown fumé), and mother of pearl dials, and a selection of coordinating straps and bracelets.

Remarkably, despite shrinking by 6mm, the Longines Legend Diver 36mm retains the 3 o’clock date function added with the release of its 2009 forerunner. In spite of this, the dial does not appear cluttered in any way and remains one of the most legible and attractive displays on the market today. The price for these new releases starts at $2,150 and runs all the way up to $2,400. To learn more about the Legend Diver collection and Longines’ other offerings, head over to longines.com.