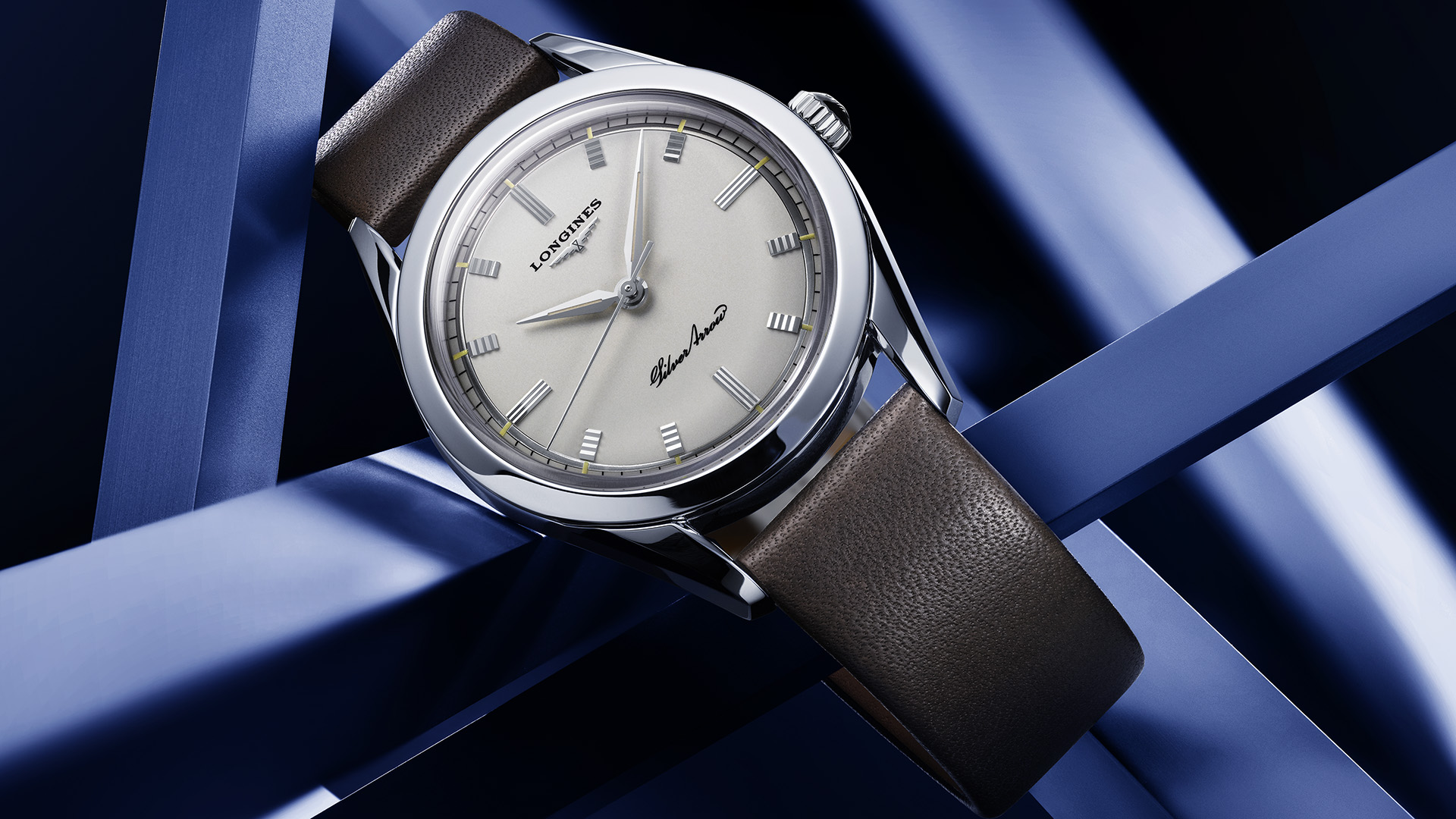 Designing a dressy timepiece is an exercise in nuance. Within the compact and usually minimalist confines afforded by these watches, the smallest adjustments – be they changes in proportion, visual balance, or small decorative touches – can have a massive impact on the character of the overall design. Over its nearly 190 year history, Longines has proven this concept time and again, and affords enthusiasts a window into the evolving language of these designs through the brand’s broad and eclectic Heritage collection. For its latest addition to this series, Longines returns to 1955, reviving one of its most charismatic midcentury designs. The new Longines Silver Arrow handsomely captures the optimism and understated charm of the mid-‘50s with a handful of modern refinements. 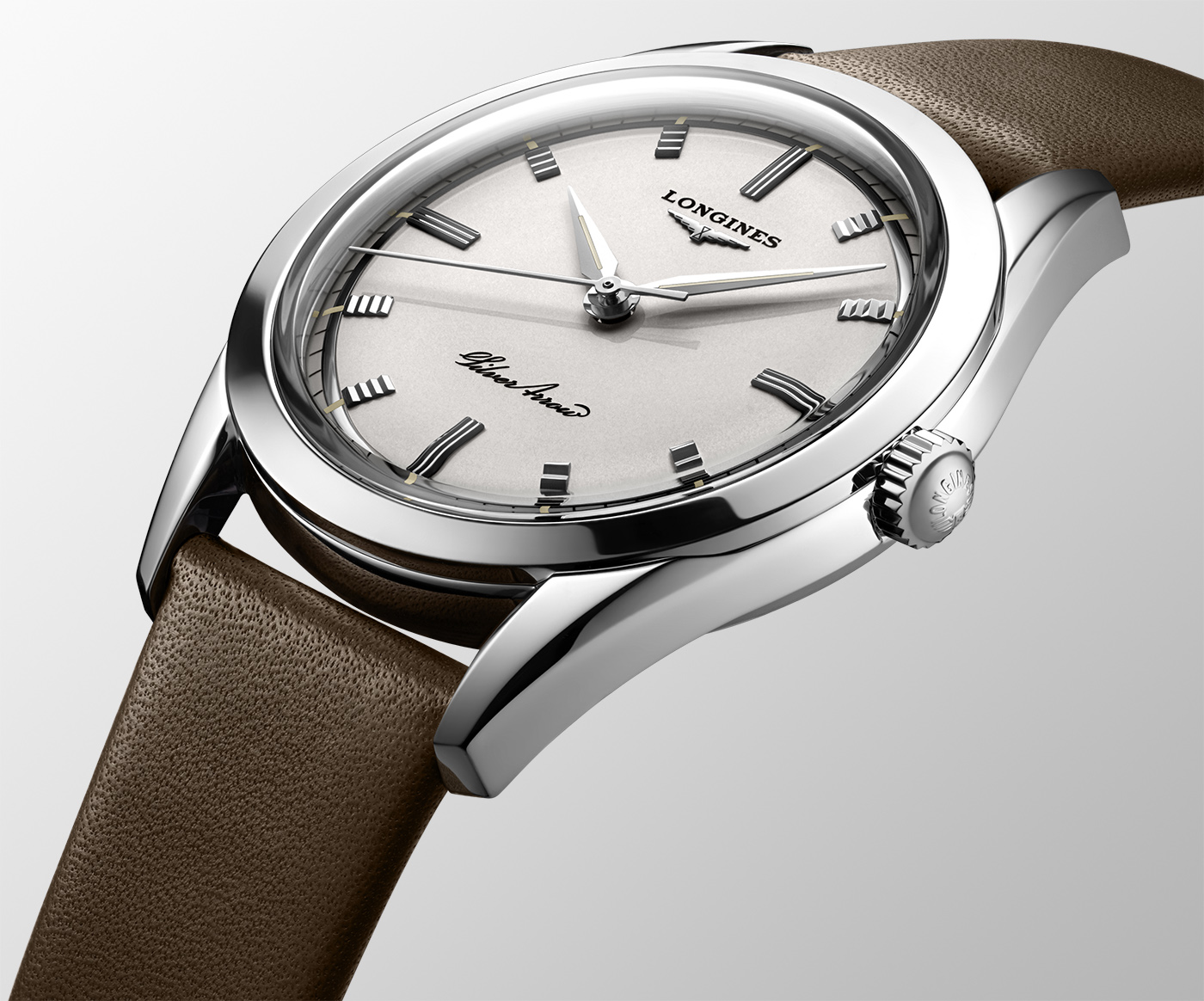 The stainless steel case of the Longines Silver Arrow is clean and classical in form, with enough unique flair to set itself apart. The mirror polished smooth bezel is wide enough to have its own presence in initial images, avoiding the airy and delicate feel sometimes associated with designs of this era. By slightly recessing this bezel into the lugs and case sides, Longines gives the case a strong core segment, while the long tapering lugs appear to flow around this central point. This effect is further accentuated by both the domed sapphire crystal and the continuous sweeping polished chamfer running along the edges of the lugs and atop the sporting flat case sides. Like many models in the Heritage collection, the case of the Silver Arrow is less about exact historical reproduction than it is about maintaining the impression the original watch gave in its original time. The original 1955 model was a diminutive 35mm in diameter, while this new version ups the size slightly to 38.5mm. This should still give a compact, dressy profile on the wrist for modern sensibilities, where a true 35mm reissue might feel almost dainty by today’s tastes. The caseback of the new Silver Arrow also maintains the impression of the original, with clean and simple etched line art of a high-speed jet flying towards the stars. Water resistance is a bit of a weak point for this case, however, offering a depth rating of only 30 meters. 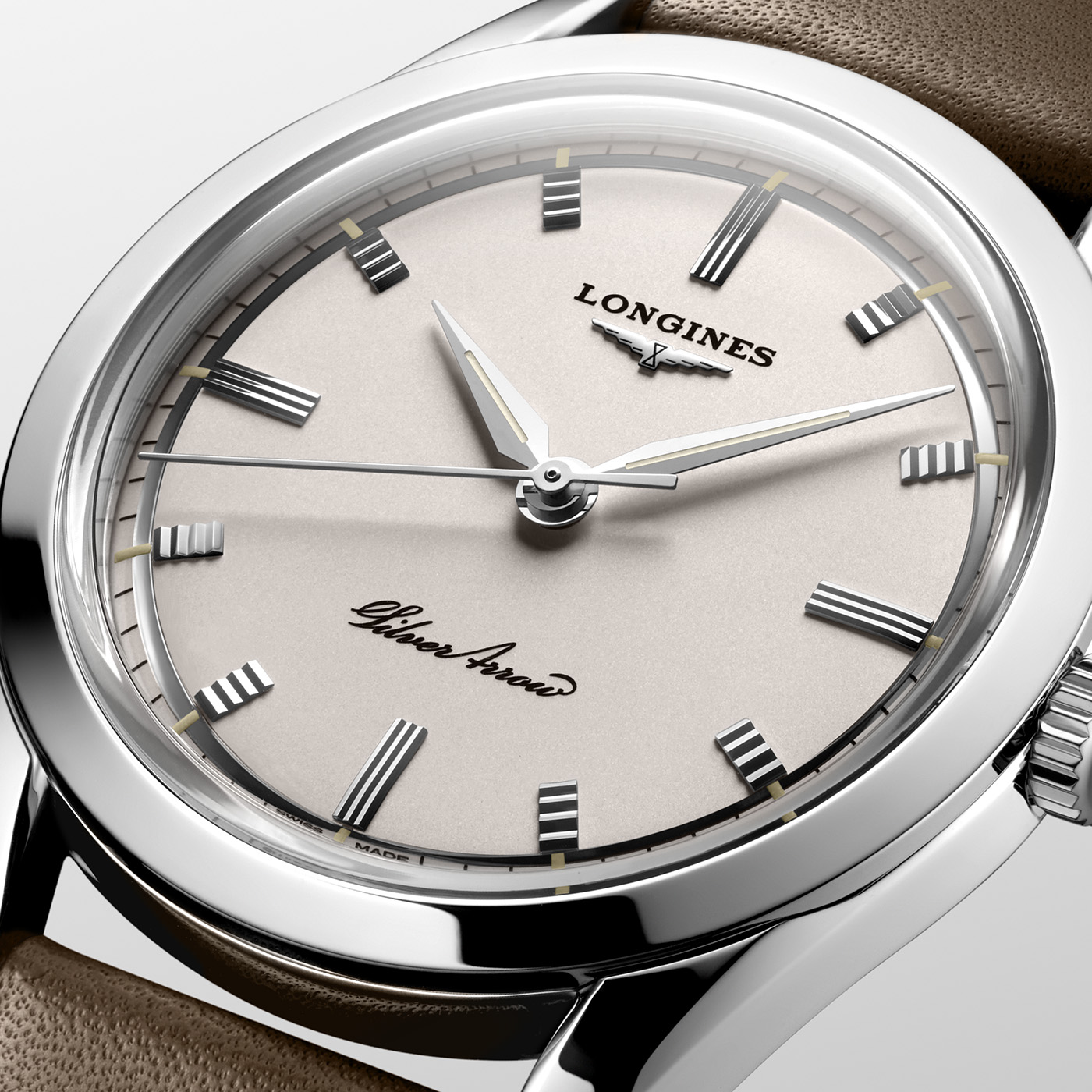 Like the 1955 original, the dial of the new Longines Silver Arrow lets its personality shine through in the little touches. The main surface of the dial is a powdery silver opaline, accented by a sloping pie pan outer segment with a brightly polished silver ring and a clean white minutes scale. The alpha handset is pure midcentury elegance, given just a narrow line of khaki lume for utility. Where the jazzy, charismatic character of this design shows through most brightly, however, is with the unique look of the applied indices. Alternating between longer vertically ridged examples at 12, 3, 6, and 9 o’clock and horizontally ridged versions for the other hours, these offer a splash of playful ‘50s midcentury modernism while creating a kaleidoscope of light play in initial images. Longines wisely opts to forego a date window here, maintaining the dial’s visual balance and preserving those unique indices. 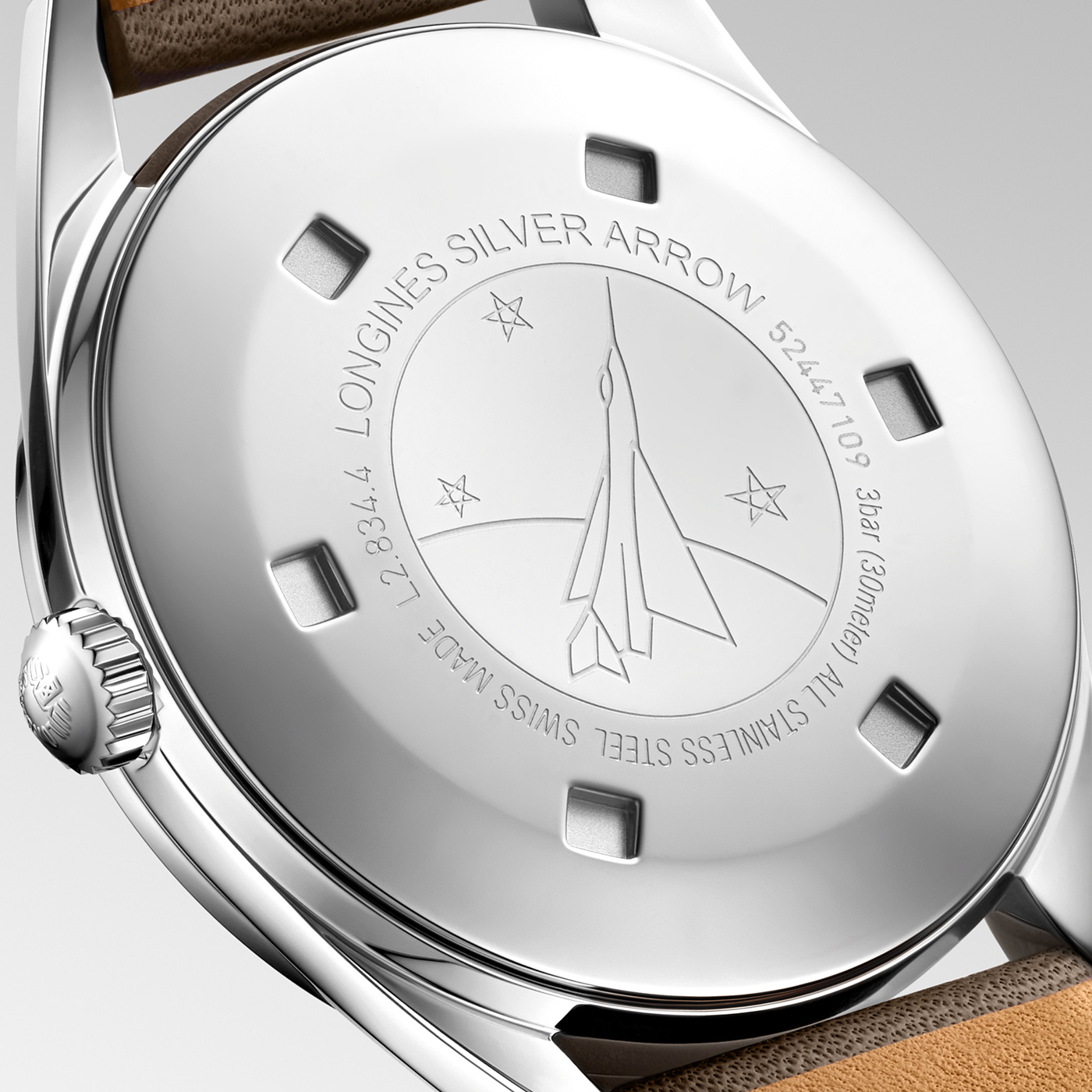 Longines powers the Silver Arrow with the ETA based Caliber L888.5 automatic movement. The Caliber L888.5 has become the brand’s go-to powerplant for three hand automatic models in recent years, offering modern innovations like a silicon balance spring and robust magnetic resistance. The Caliber L888.5’s power reserve is similarly robust, offering 72 hours at a 25,200 bph beat rate. To keep the clean and dressy look of the overall design, Longines pairs the watch with a stitchless minimalist leather strap in neutral brown. 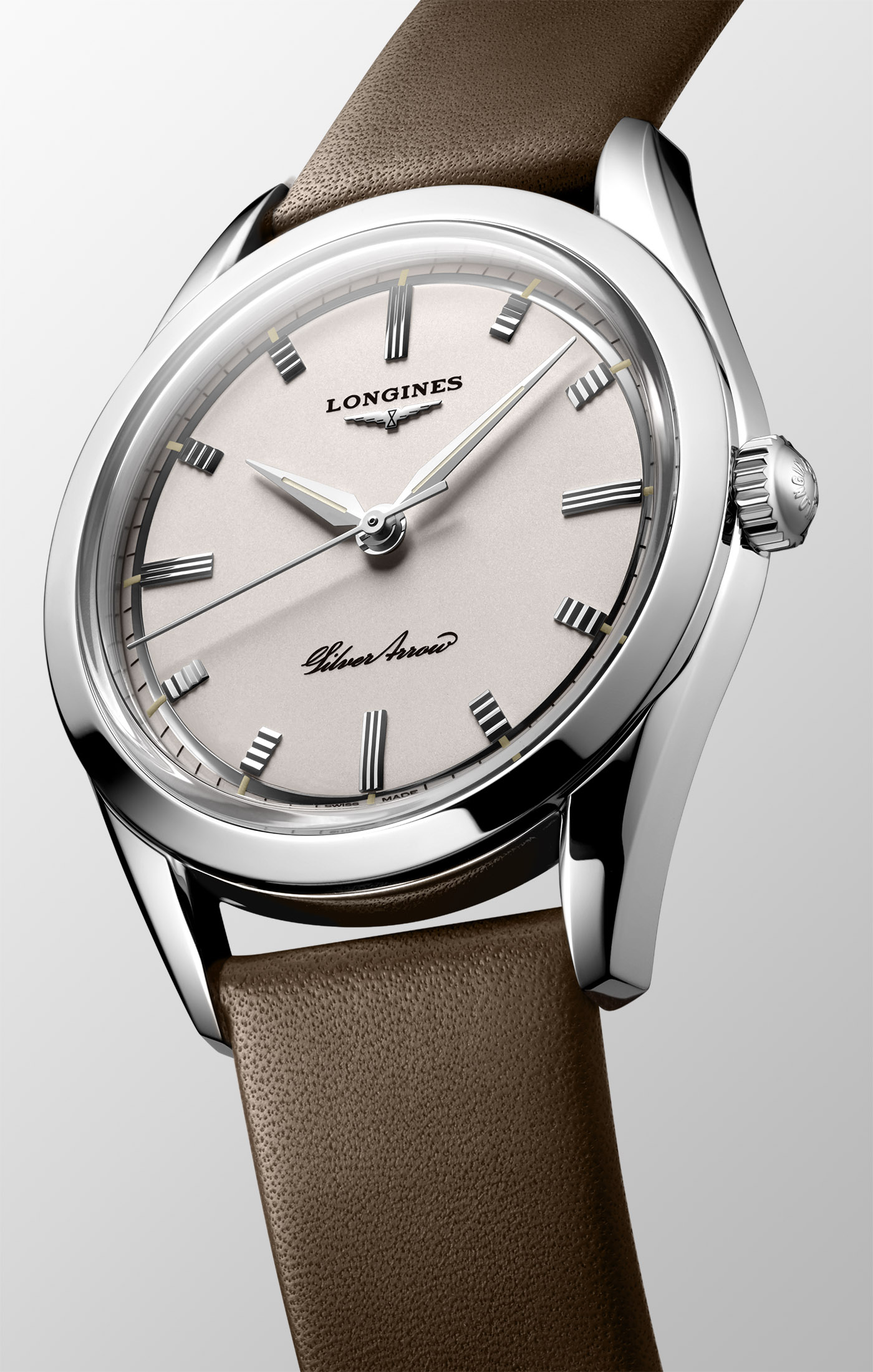 Longines’ use of the Silver Arrow moniker on the dial of the 1955 original may have been a case of historically poor timing. The Silver Arrow nameplate itself was chosen to evoke the Mercedes-Benz Silberpfeil, or Silver Arrows, race cars that were at that point dominating both the Formula 1 and sports car circuits with legendary drivers such as Juan Manuel Fangio and Sir Stirling Moss. On June 11, 1955 however, during that year’s 24 Hours of Le Mans, Mercedes-Benz driver Pierre Levegh collided with a swerving Austin Healey. The impact launched Levegh and his car into the grandstands, killing between 80 and 84 spectators and injuring well over 100 others. Mercedes-Benz immediately withdrew from the race out of respect for those lost, and completely halted factory racing efforts until 1989. Almost immediately after its introduction, then, the inspiration behind Longines’ Silver Arrow name had disappeared. Decades later and with the return of Mercedes-Benz to the forefront of racing, the onerous overtones the name may have carried in 1955 are all but gone, leaving behind an elegant and evocative resonance. 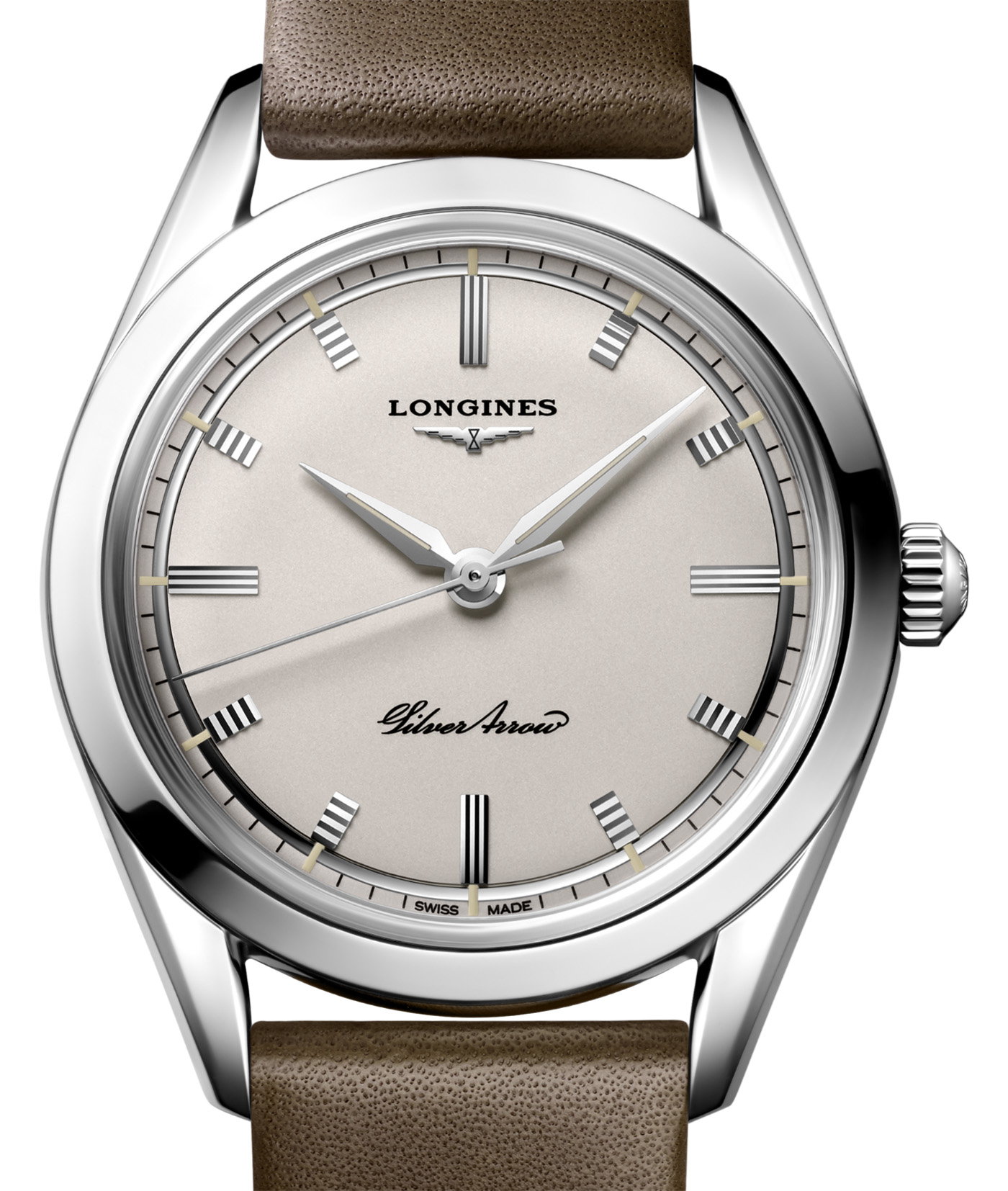 Deftly combining nuanced and charismatic ‘50s character with modern sensibilities, the Longines Silver Arrow stands as one of the Heritage collection’s most cohesive and handsome designs. The Longines Silver Arrow is available now through authorized dealers at an MSRP of $2,100. For more details, please visit the brand’s website.