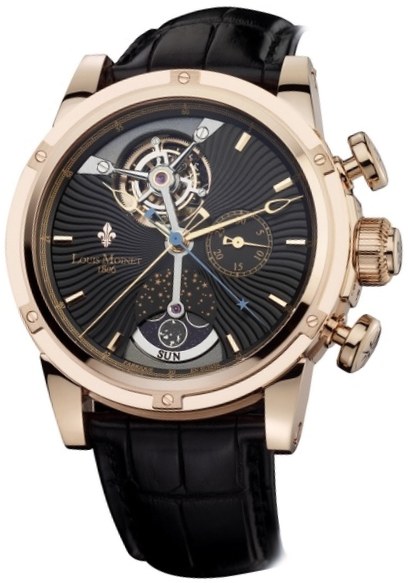 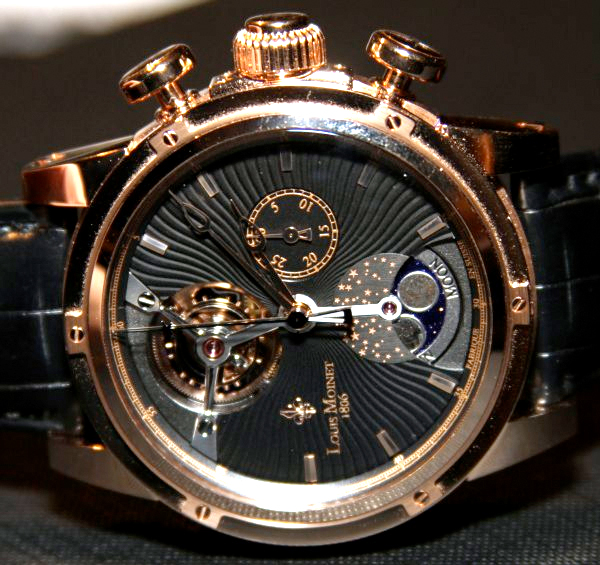 New from Louis Moinet is the Astralis – a nice tourbillon-based watch that is a bitch to photograph. I swear, it is as though the watch keeps saying to me “I am for private eyes only.” There are going to be only 12 of these in the limited edition so that sort of makes sense? The watch isn’t really that dark, but the dial color and cured sapphire crystal say “no no” to the camera lens. You’ll just have to see one for yourself to get the real-deal view. What is the watch all about? Well it is Louis Moinet’s newest astrological-themed high-end watch with a fun variation on a 24-hours dial. 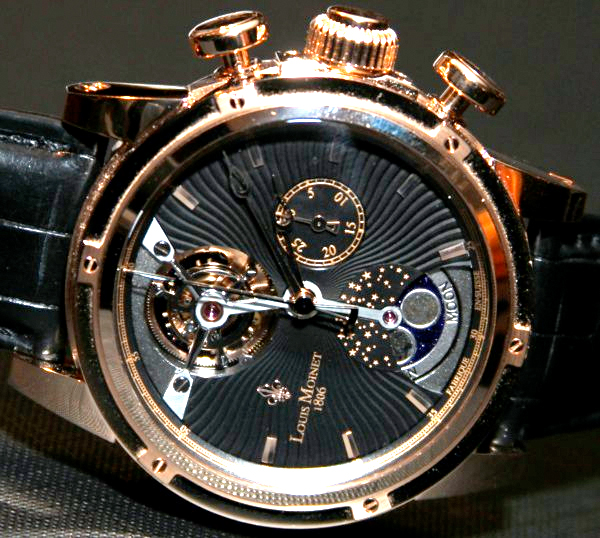 See that disc at 6 o’clock that sort of looks like a moon phase disc? It revolves around completely once a day (each 24 hours) and has four stones on it. Each is supposed to be from one of four different planets (sort of), all there for you to view each day. This is cool, and I like the “rare material” component of the watch. On the disc are slices of various meteorites found here on earth that came from space. These are really rare, so this isn’t common rock on the watch. The stones are labeled “Sun, Moon, Mars, and Mercury.” The sun one is a bit misleading. There isn’t really rock or a surface like that on the sun. And pieces of the sun don’t exactly break off and fly away. This stone is actually part of an asteroid that is said to have formed near the sun called an Itqiy asteroid. The Mercury stone is believed to have come from Mercury, but we aren’t sure since we’ve never actually been there to collect samples. The Moon stone is rare and was found on Earth as well. The rarest of stones might be the piece of Martian rock. Apparently less than 75 Martian meteorites have been collected. It is neat to see all the stones next to each other, and they are on a sparkly aventurine plate. Of course, because each of the slices are unique, no two of them will look the same. 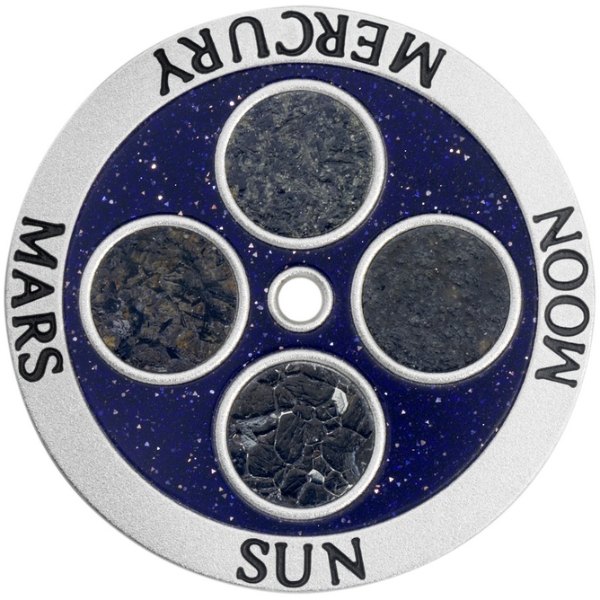 The watch case is large being 46.5mm wide in 18k rose gold. It has that signature steampunkish Louis Moinet style to it and is made up of 50 pieces according to Louis Moinet. The sapphire crystal is rather domed while another is on the back to view the movement. Louis Moinet says that the Calibre LM27 is based on a vintage manually wound Venus movement. That looks about right. There is a cosmetic plate on the side of the movement that looks like the moon surface – or something like that. That is pretty cool I guess. 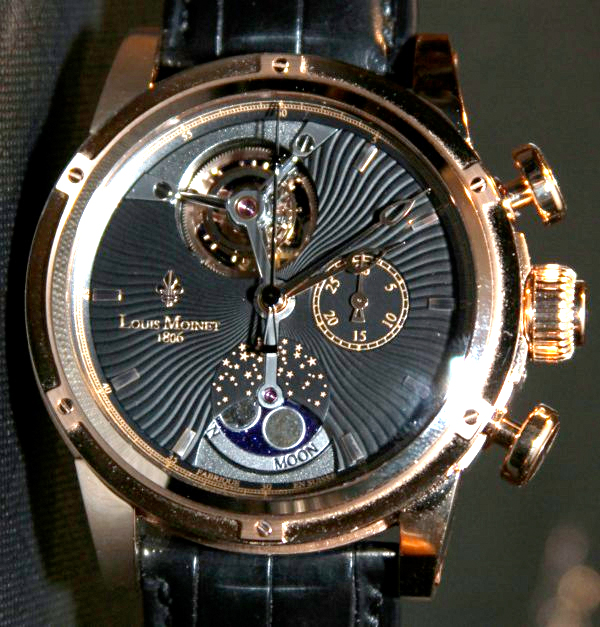 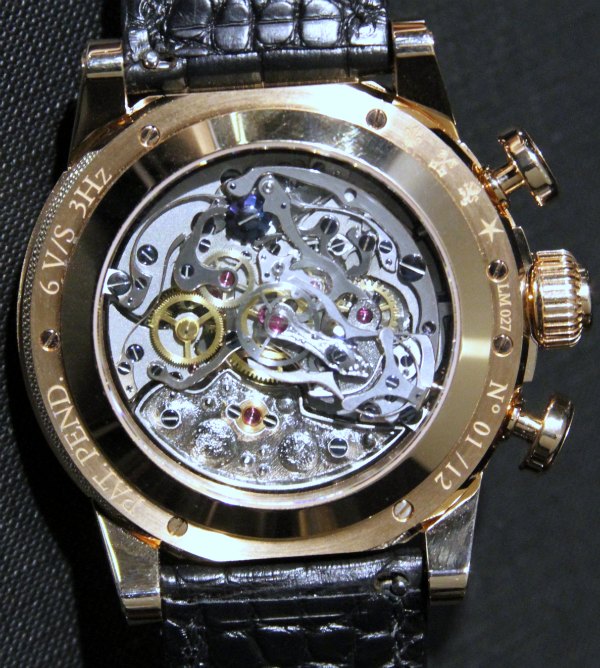 The Calibre LM27 has a series of functions including the time and tourbillon. They call it an “Astral Tourbillon,” and from what I can tell that doesn’t actually mean anything technical. Like the aventurine plate used for the 24 hour planet disc, there is said to be aventurine under the tourbillon as well to replicate the look of the night sky. The movement also has a 30 minute split seconds column wheel-based chronograph – you know, so they could have those cool plunger-style chronograph pushers. The pusher for the rattrapante hand is in the crown. 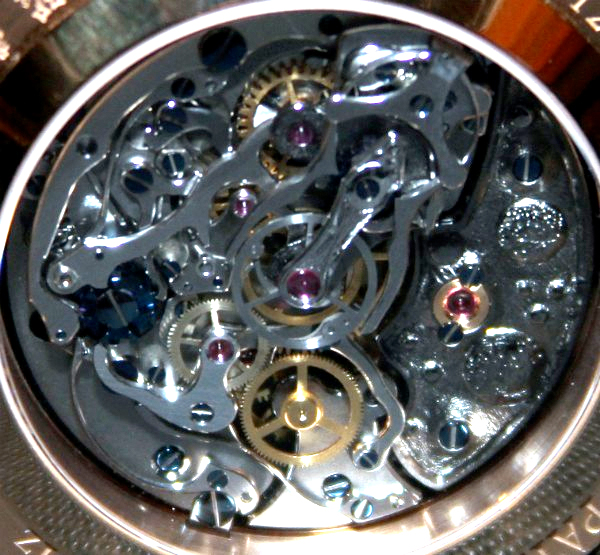 The “Jura Stripes” decor on the dial is always nice looking, and for 2011 Louis Moinet seems to prefer these “dewdrop” tipped hands. They look cool, but as is the case with other Louis Moinet watches, there can contrast issues where the hands are tough to see. I do like the applied gold hour markers. Attached to the watch is a alligator with crocodile leather lining strap. Wow, both in the same strap! The Louis Moinet Astralis watch will be limited to just 12 pieces.