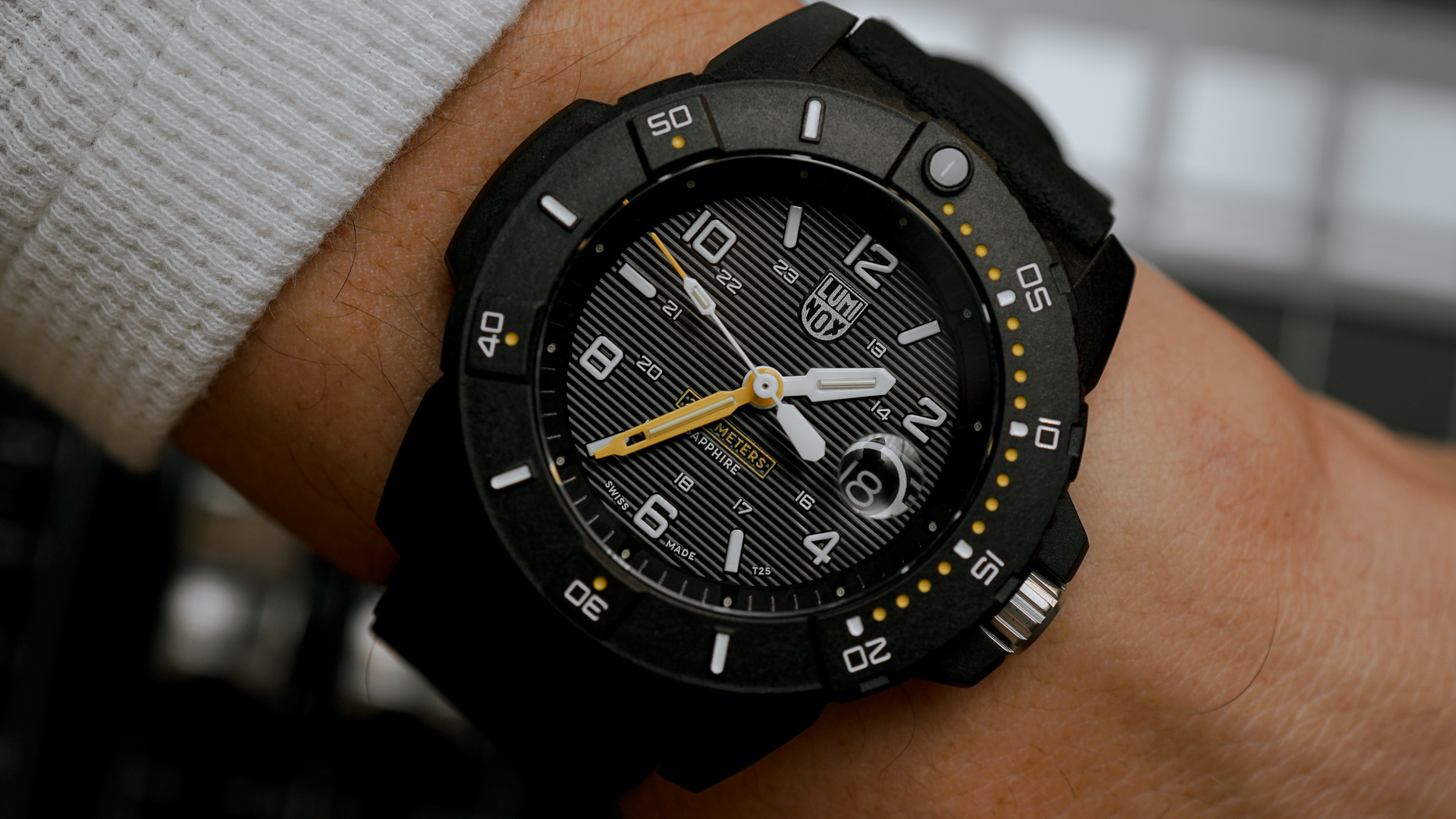 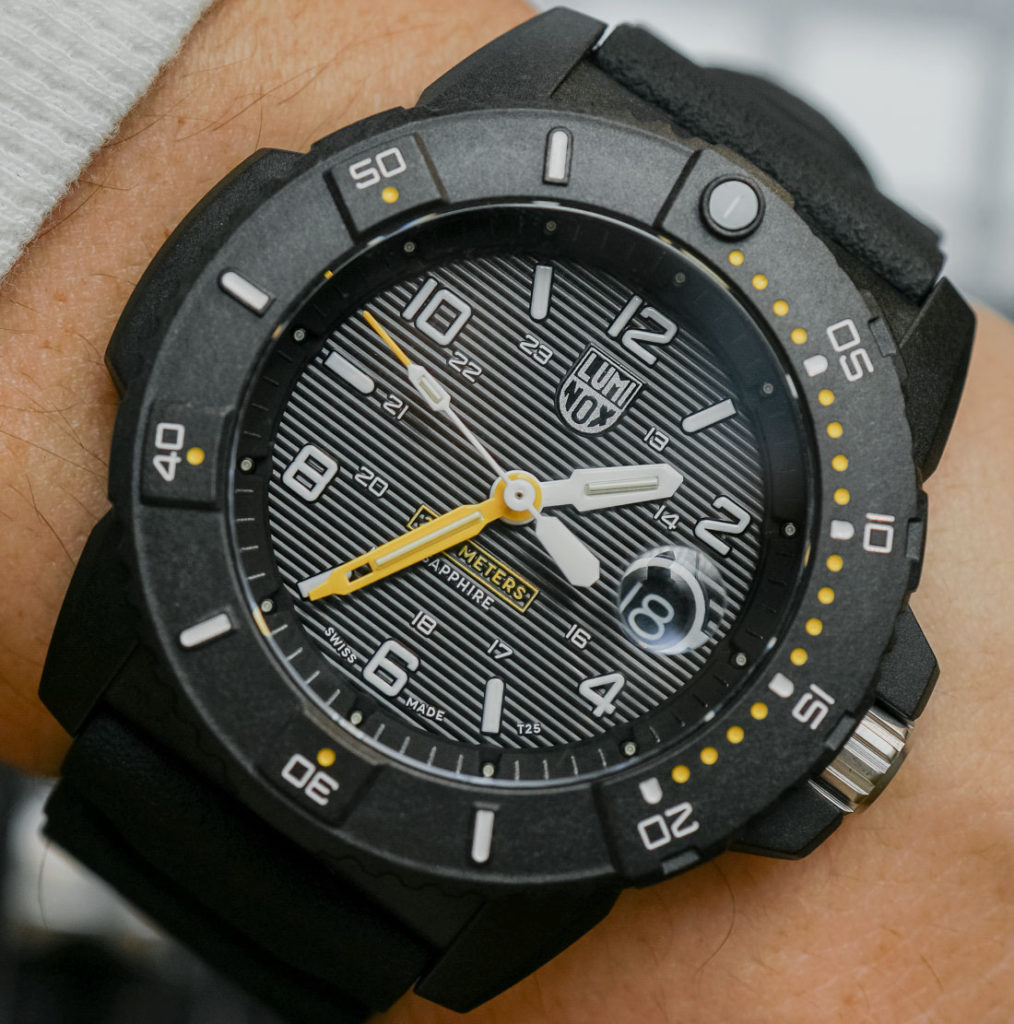 If you were ever tasked with sketching a Luminox watch from memory, you’d most likely start with the brand’s bold two-tone chevron wordmark, around which you’d probably draw a black, oversized case, that sharply textured polymer bezel, adding in some syringe-shaped hands before finishing the dial with a ring of luminous tritium tubes — all hallmarks of the brand’s original Navy SEALs watch. Some 25 years later, it’s the same silhouette that persists on the brand’s latest evolution of the SEALs watch — a third-generation tool watch that shares much of the core DNA of the first Luminox watch that was called into service by the Navy SEALs back in ‘92, thanks to a fortuitous meeting with a U.S. Navy SEAL officer at an outdoor gear show. 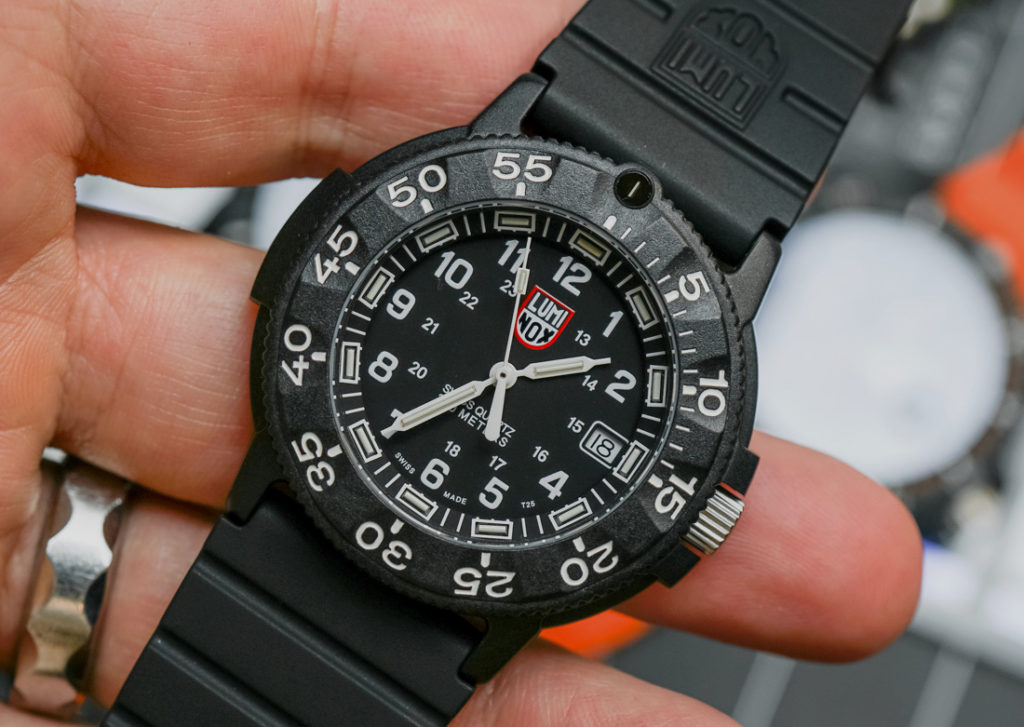 Within the labyrinthine world of military-issued products commissioned by various government contracts, Special Forces like the Navy SEALs operate on a different level. These units are generally allowed to choose their own weapons and gear, which enables their RDT&E Officers (or Research, Development, Testing, & Evaluation, for those keeping score at home) to seek out the products best suited for mission use. Naturally, an endorsement by the Navy SEALs might be amongst the most coveted in watchmaking — after all, who is better-suited to illustrate a watch’s durability or capability than a crack military unit whose grueling selection process is dubbed “hell week?” That endorsement, and subsequent deployment on the wrists of the world’s most elite fighting force, has long remained the holy grail for tool watch manufacturers and even a few high-end luxury watchmakers like Graham and (perhaps more famously) Jaeger LeCoultre. 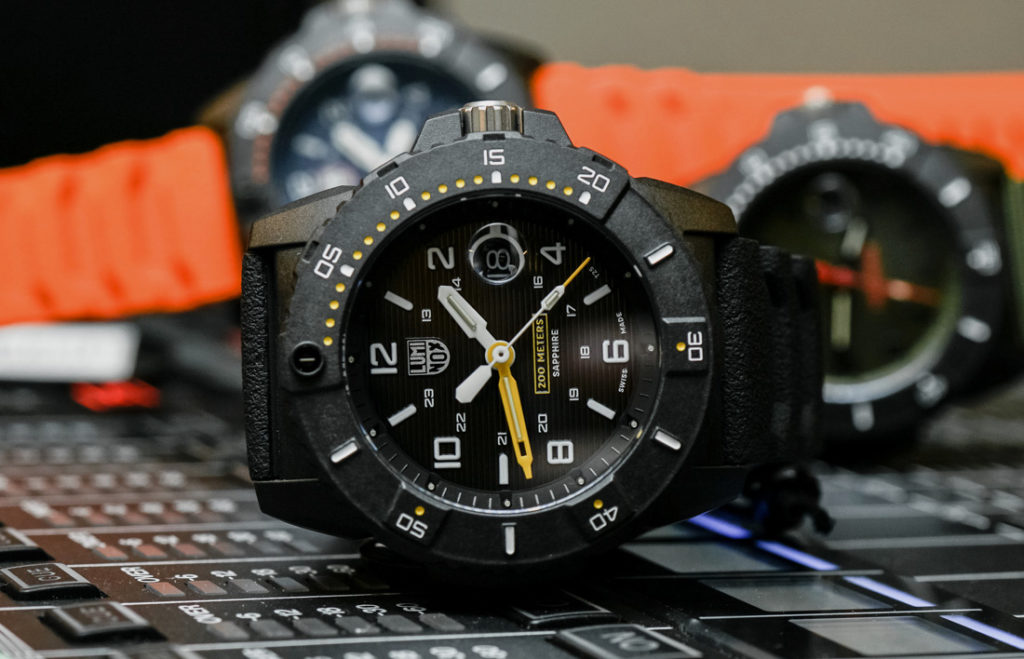 But what the SEALs actually choose to wear on missions vs. what luxury watchmakers would want us to believe they wear are two entirely different things. What makes the Luminox story unique, though, is that a Navy SEAL RDT&E officer actually worked directly with the brand to design an analog watch that met the unit’s specific needs. Many of the above hallmarks — the rugged, non-reflective black case, the deeply scalloped bezel, and the luminous tritium elements (fun fact: those same tubes are used on various weapon sights for better target acquisition and legibility in low light) made their way on to what would eventually be the 3000-Series, and the final watches purchased and used by the SEALs. 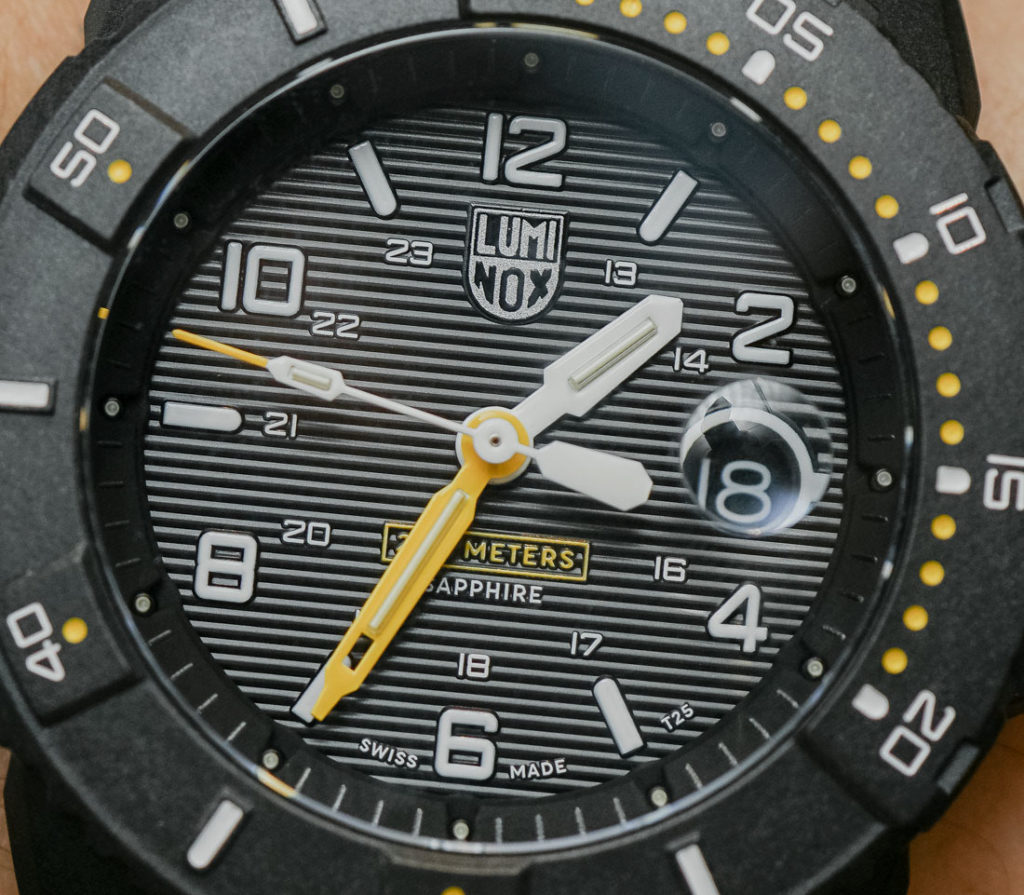 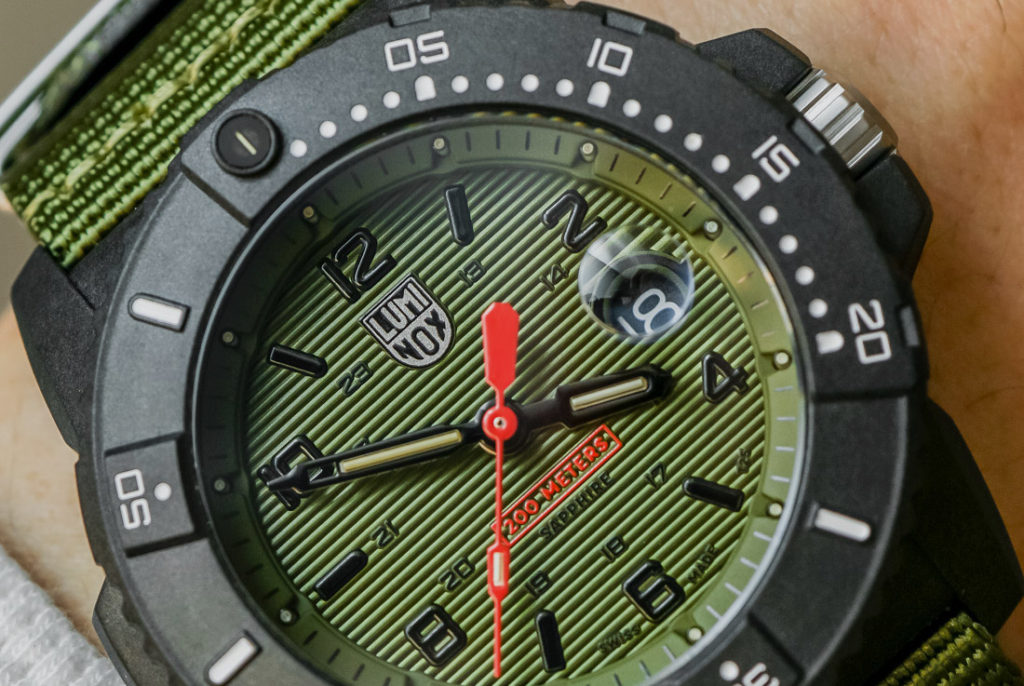 That early endorsement by the SEALs would pave the way to other Luminox contracts with various military, law enforcement and first response units around the world. Now in its third iteration, the new 3600 Series SEALs watch has been subtly updated, presenting itself with a sleeker, more stripped-down visual style that preserves the core functionality of the original SEALs watch, while ratcheting back the overt tactical style in favor of what’s arguably a more modern aesthetic. Like the outgoing 3500 Series, the new watches are still built with the Ronda 515 Swiss quartz movement inside a lightweight black carbon fiber-reinforced composite case (called Carbonox) that’s water-resistant to 200 meters, thanks to its steel screwdown crown and caseback, but it’s now fitted with a new stamped dial that’s a little more fun to look at under various lighting angles. You’ll note that only the even-numbered hours remain, reducing much of the visual clutter that characterized previous generations of the SEALs watches. 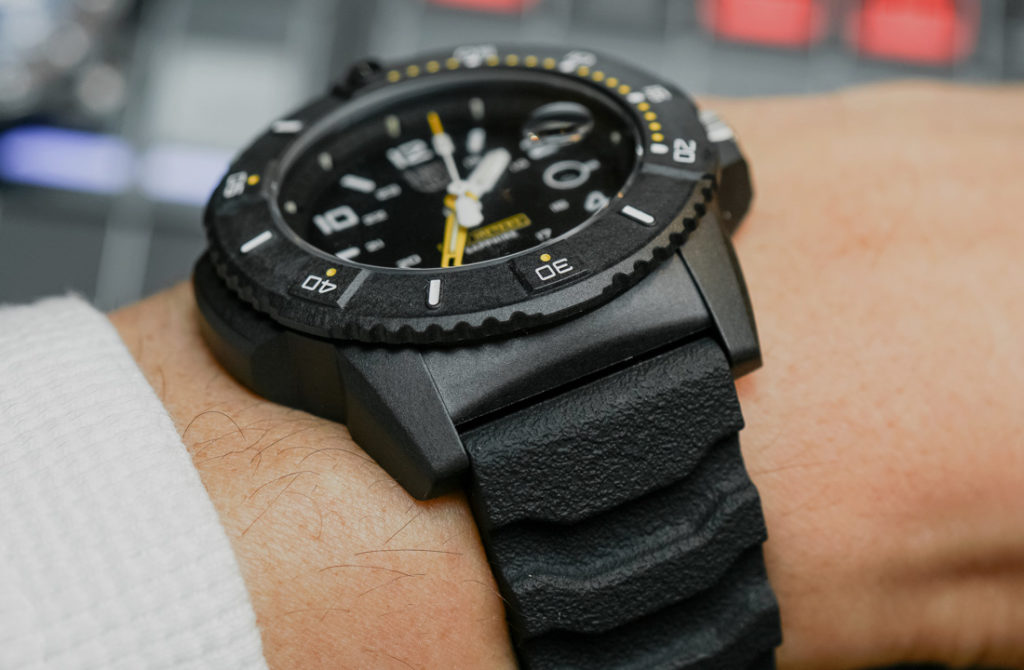 Speaking of visual clutter, the scalloped ratcheting dive bezel is back (note it is textured both top and sides, enabling easy rotation from either a gloved palm or fingertip), but only the 10-minute graduations persist, which, again, cleans things up considerably from a visual standpoint. The end result feels a little more dynamic (particularly in the drab olive green), and perhaps a little more high-end, due also in part to the new AR-coated sapphire crystal protecting the dial. Particularly when compared to earlier generations of the SEALs watches, which felt almost too tactical — like the timekeeping equivalent of an aftermarket AR-15 stock. 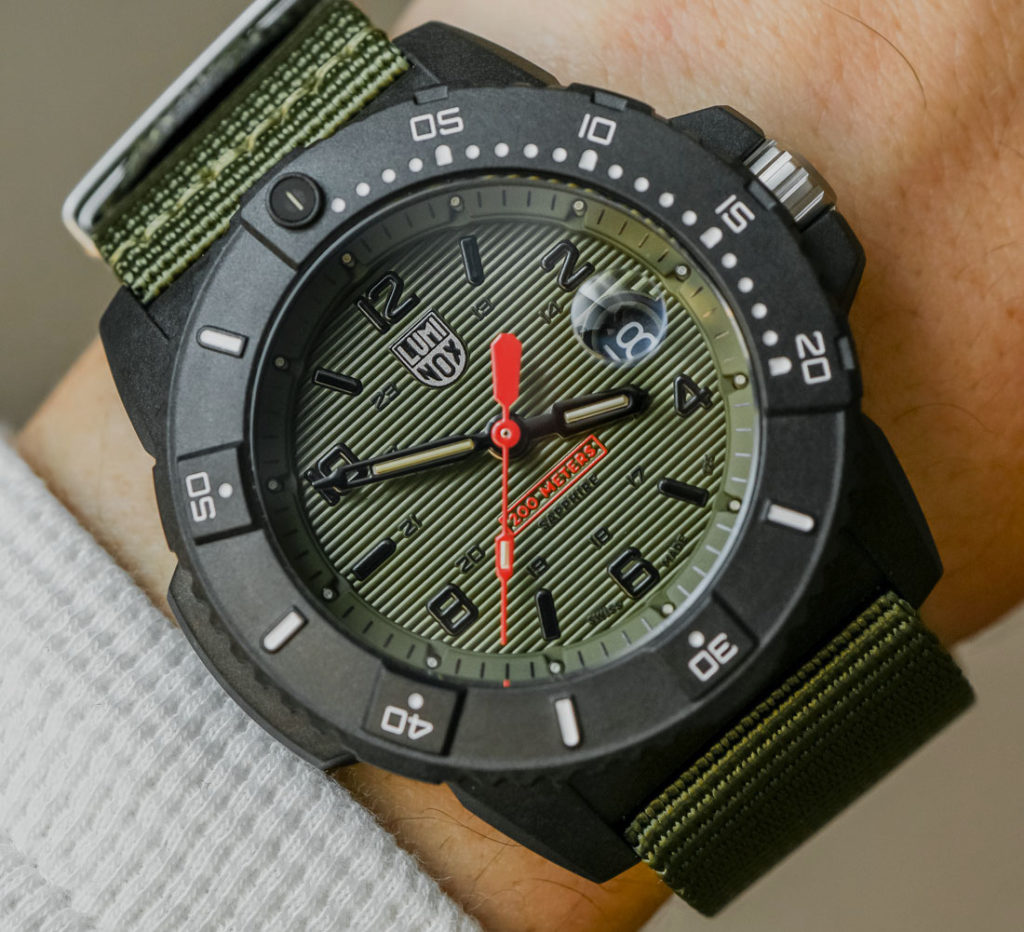 Of course, it wouldn’t be a Luminox without the GTLS (gaseous tritium light source) or tritium tubes that ring the dial, glowing without any external charging or light source for up to 25 years. Those tubes are now vertically oriented, though, which creates a series of 12 “dots” around the dial, rather than the luminous “dashes” that characterized earlier SEAL watches. It’s a cool visual effect, for sure, though the tradeoff is likely less visible luminescent material at a glance, since the surface area of the largest tubes are, more or less, relegated to the sword-style hour and minute hands. Also new is a cyclops that magnifies the date aperture at 3 o’clock. Between all the fresh design updates, this is perhaps the most incongruous element, arguably adding a bit of visual clutter, whereas all the other changes make the watch more spartan in its approach. 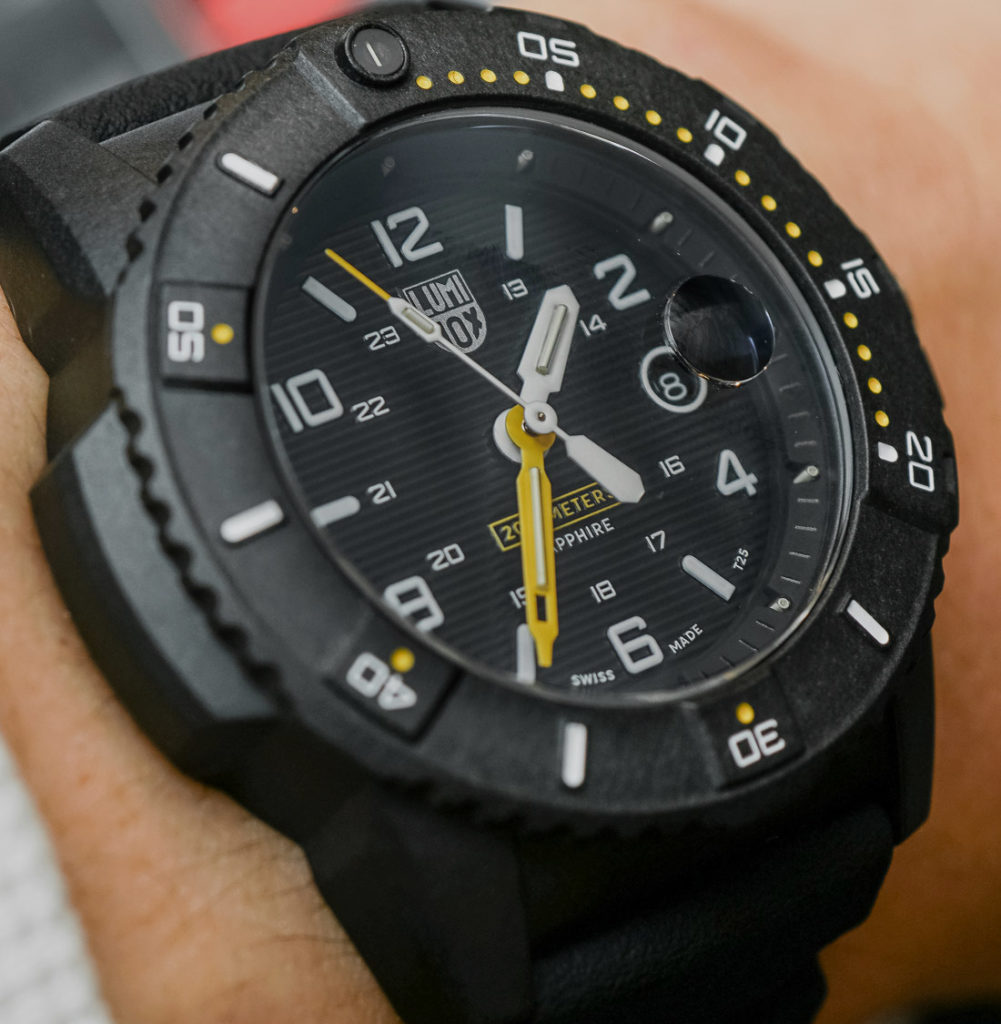 On the wrist, the 45mm Carbonox case wears as expected: it’s certainly large, but not overly so, thanks to its extremely light weight. Generally speaking, I’d argue a best-case wear scenario for a Luminox isn’t everyday wear, but as the ultimate weekend or adventure watch – both contexts where a slightly larger watch (particularly one powered by a quartz movement) can be forgiven in the name of better legibility or durability. The Luminox 3600 Series Navy SEALs watches have a suggested retail price of $495. Those looking to add one to their gear locker can learn more about the new collection at luminox-usa.com.