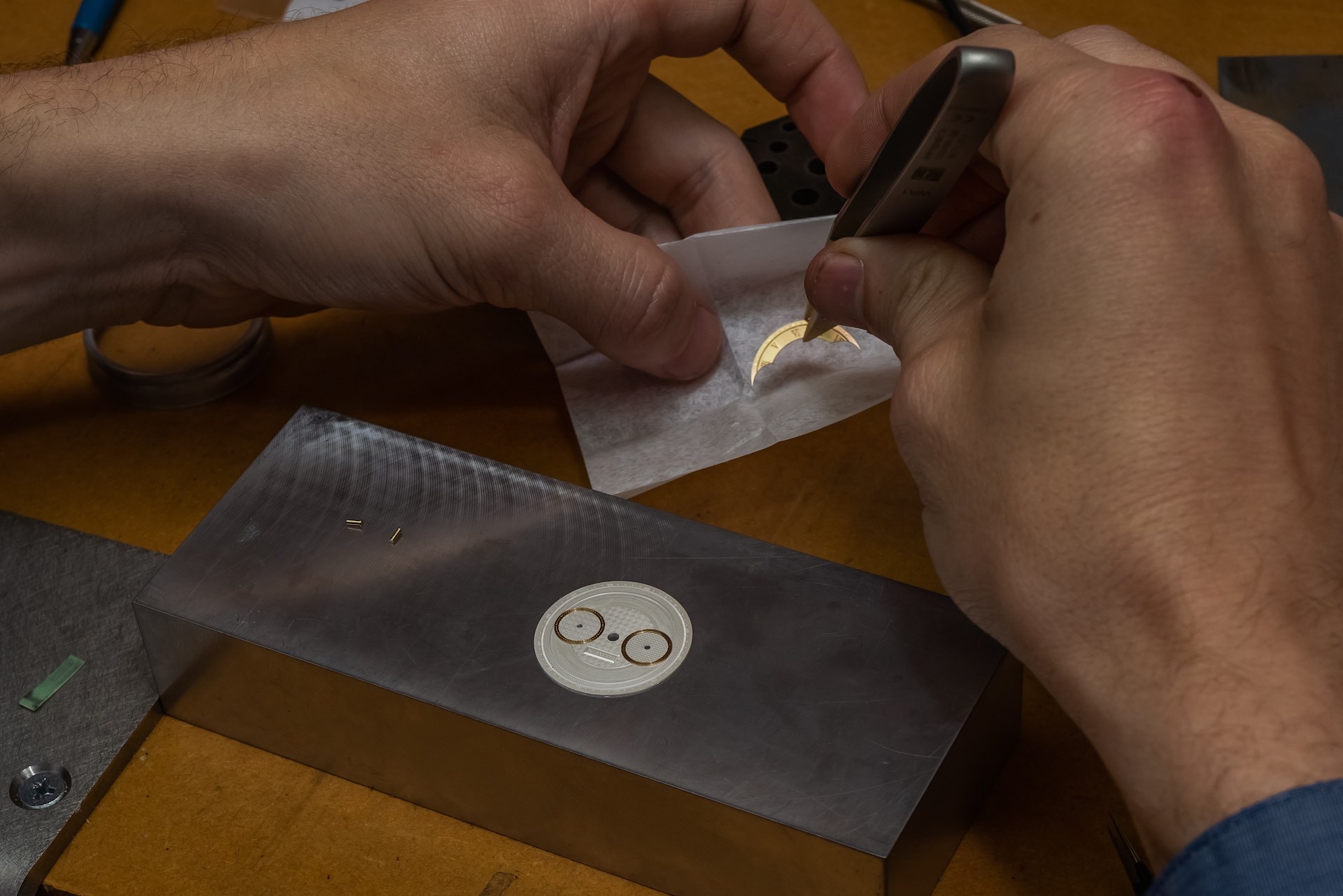 Made In Los Angeles: Inside The J.N. Shapiro Watches Workshop

I first met Josh Shapiro about three years ago here in Los Angeles where we both live, and just recently I visited him again to see how his brand and workshop have grown.

Last year, we covered the J.N Shapiro Infinity, a watch that was the tangible manifestation of Shapiro’s seven-year journey that began when he first picked up Watchmaking, by George Daniels. Within the 465-page tome, it was the sections on engine-turning (AKA guilloché) that led him to where he is today. Ironically, Shapiro initially enjoyed skeletonizing movements before focusing his attention and talent away from the heart of the watch and more toward the face. 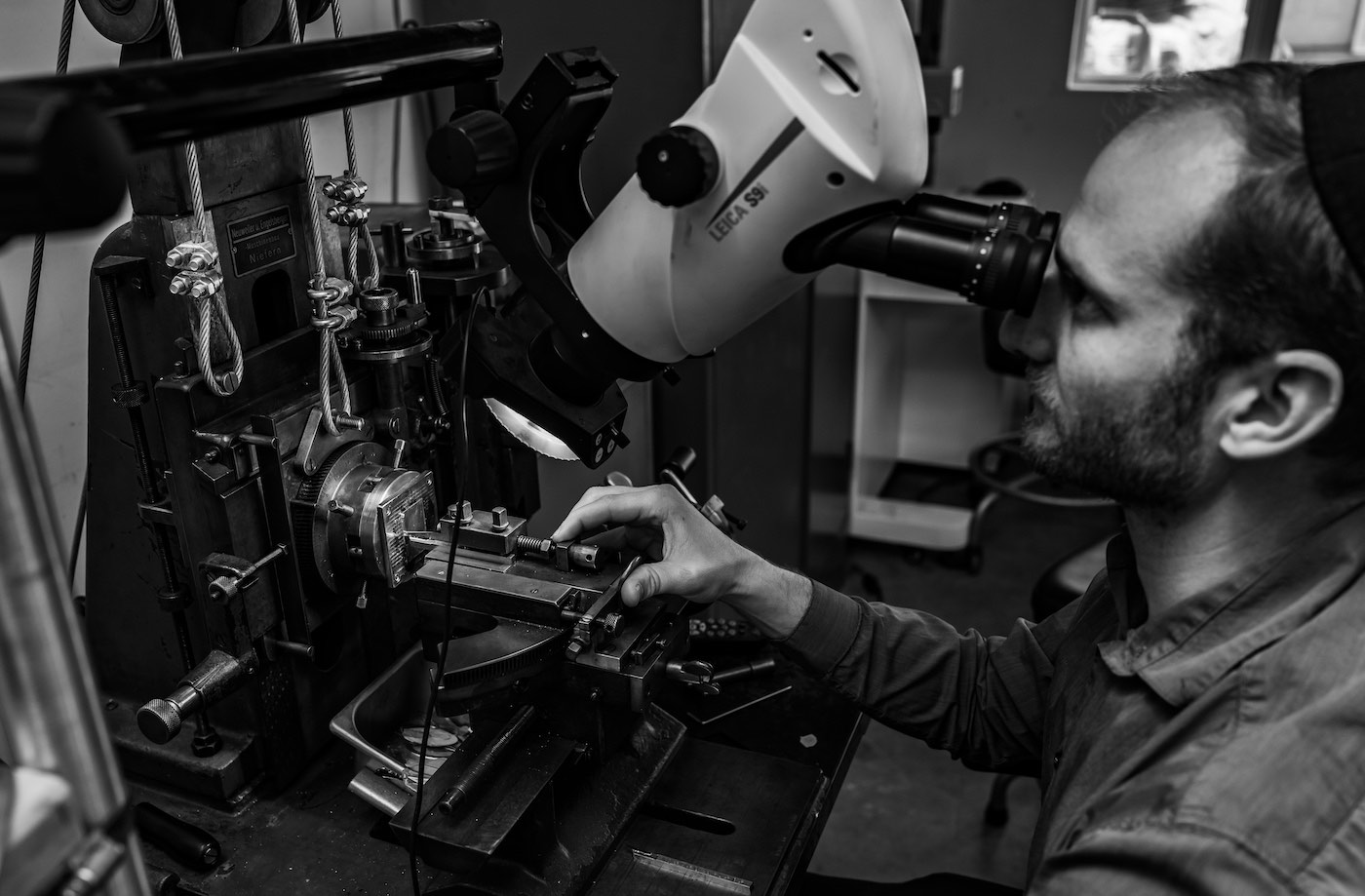 There are two big pieces of machinery at the heart of the J.N. Shapiro workshop. The first is a Neuweiler Engelsberger Straight line machine that was made in West Germany right after the end of World War II. This is the machine that Shapiro uses to create his basketweave and his signature Infinity weave. (Shapiro is also currently restoring another line machine that dates back to the 1890’s.) 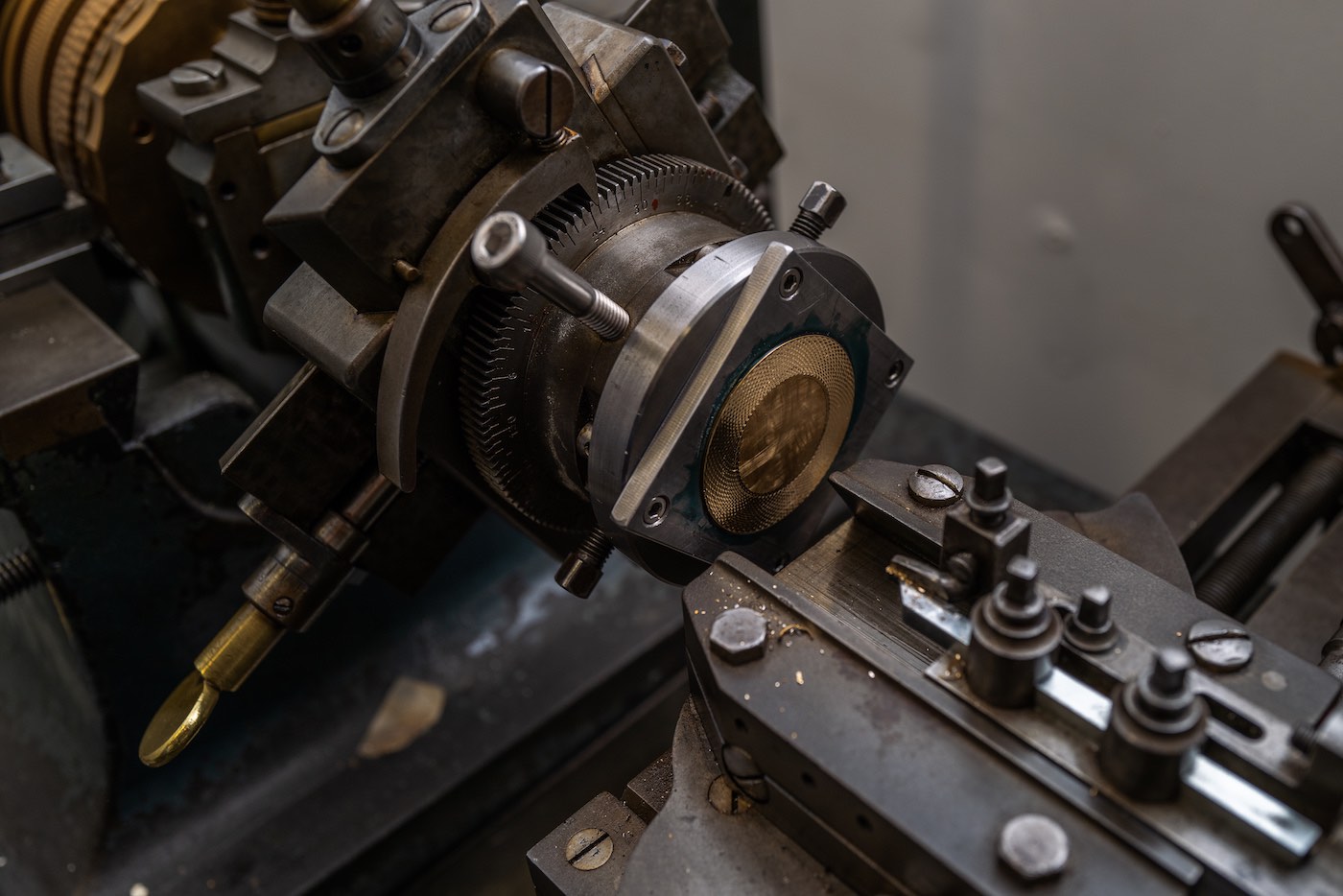 Second is the Rose engine machine that was made by G. Plant & Sons and dates back to about 1930. This machine utilizes large rosettes made of Bell-grade bronze to create dial patterns. I gave this machine a go on my own brass dial-plate, and the Zen-like patience and attention to detail required to produce even a so-so “practice” piece was substantial. I can only imagine the hours of practice it takes to be able to create the immaculate and ultimately beautiful results that Shapiro is capable of. 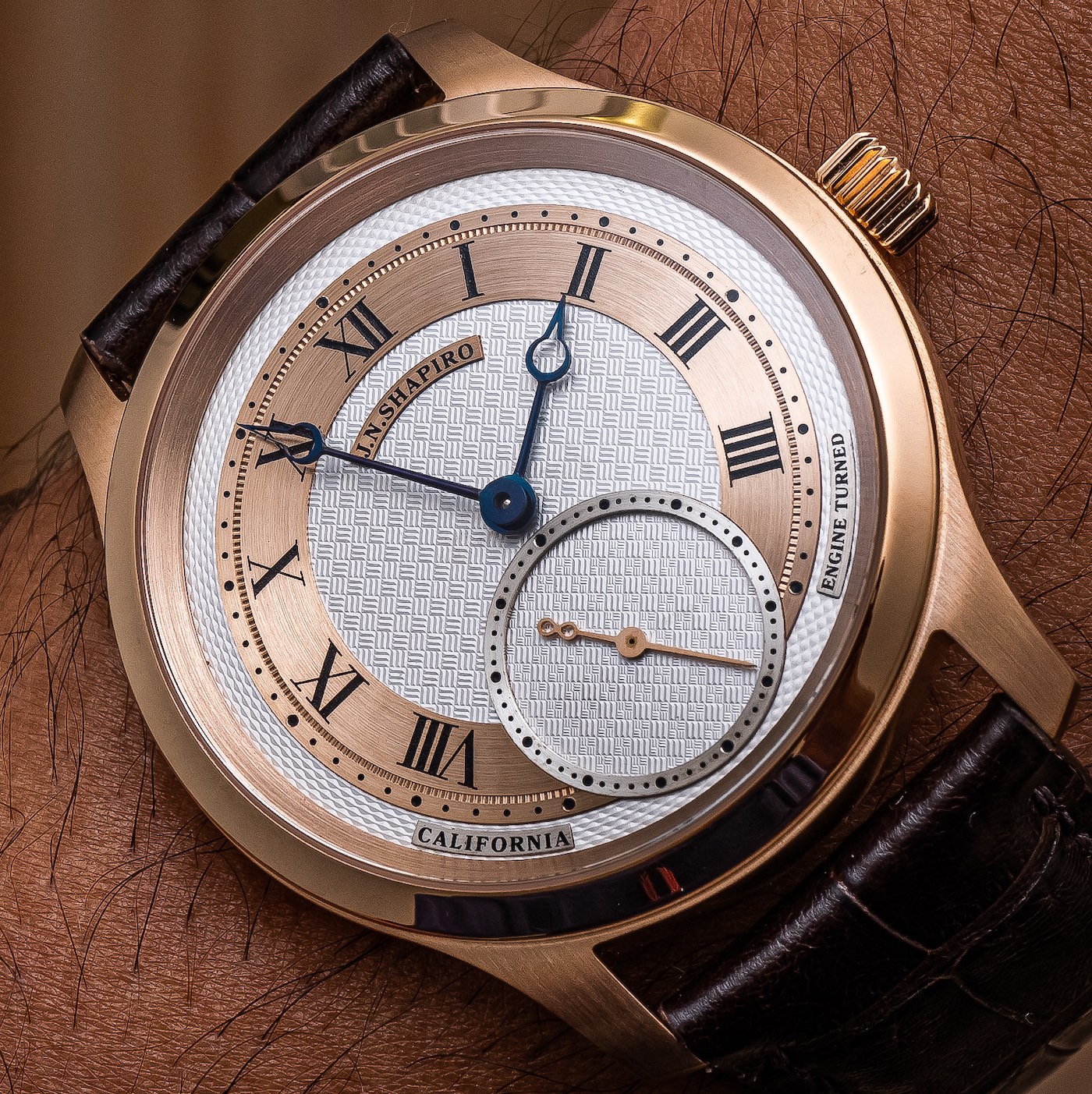 Recently, Shapiro has been producing more Infinity watches for his clients, both local and international. Shapiro was also sought out by Oster Jewelers, who requested a special Infinity watch model done in a 42mm rose gold case with a matching rose gold chapter ring. Shapiro traditionally made his watch in rose gold but with a silver chapter ring, though his body of work is constantly evolving.

Of note, Shapiro decided to downsize the cases for his Infinity watch and it’s now in a 40mm-wide case. He now also produces the Infinity in steel, white gold, and platinum. 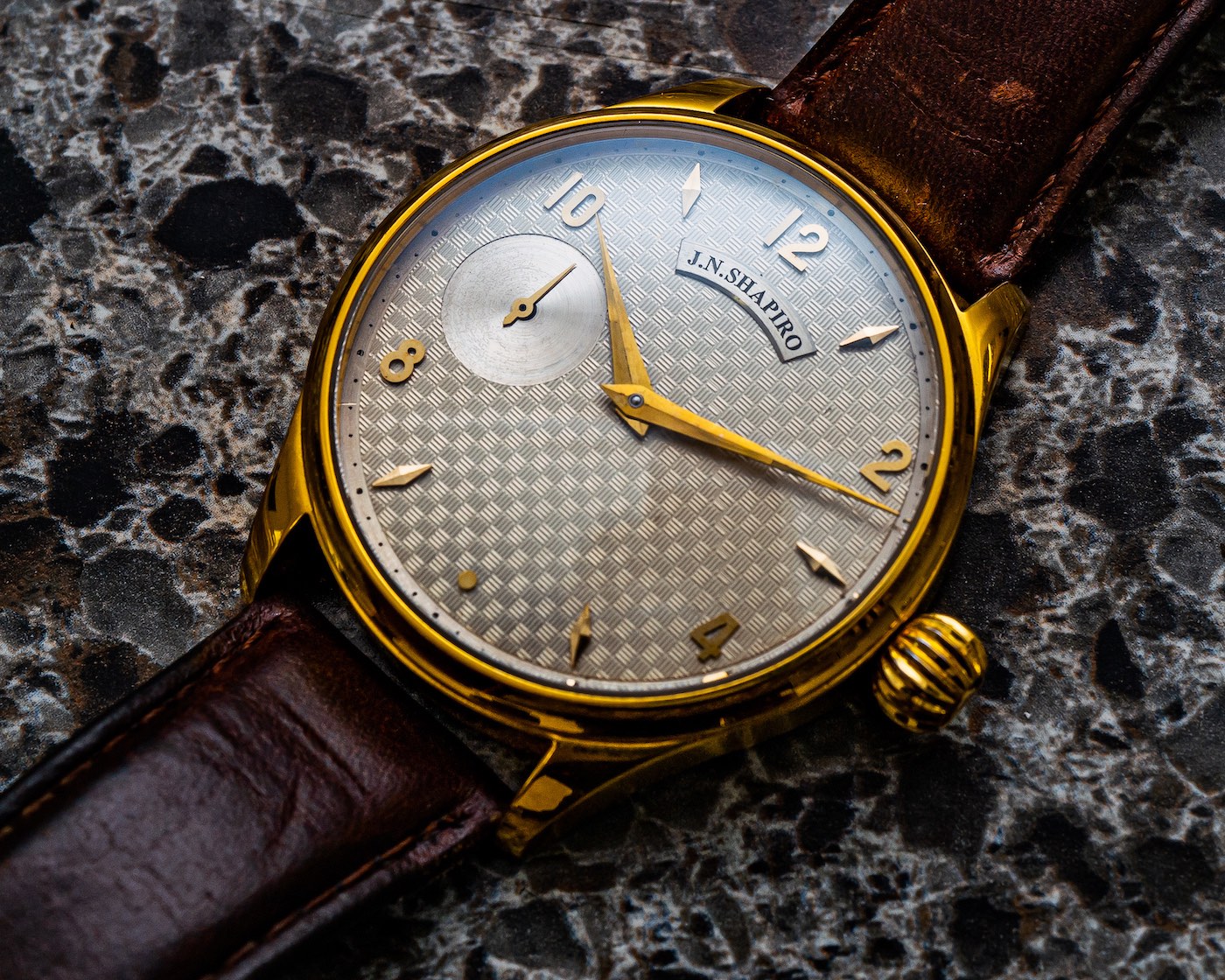 The J.N. Shapiro Infinity watch has made the rounds of watch enthusiast media in the past year or so, but I was quite curious about the steps that came before and led up to his first “commercial” piece. Shapiro was happy to show me his first professional level watch, which was a conversion of a Hamilton 921 Pocketwatch. The “Infinity pattern DNA” on the dial is clear, but I’m also quite a fan of the 18k gold applied numerals and indices on this first watch. 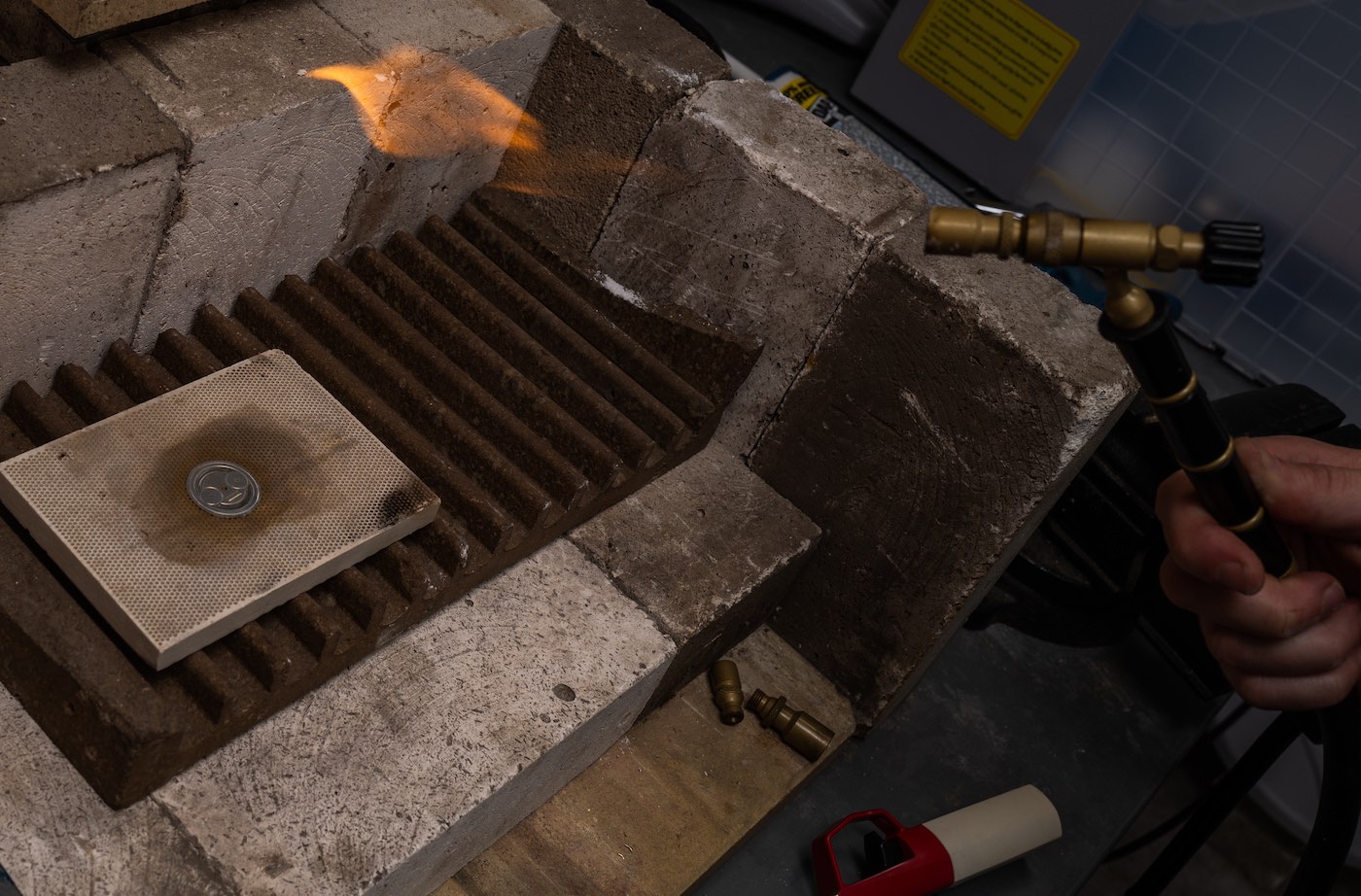 Above, you can see the process of Shapiro whitening and applying gold chapter and 18k sub-dial rings on a dial he was commissioned to do for a client. (Part of the dial is blurred for the client’s privacy.) Watching the process is a coming-together of both chemistry and watchmaking skill. What’s funny is that the above dial ultimately didn’t meet Shapiro’s standards, and everything but the 18k chapter rings was scrapped. 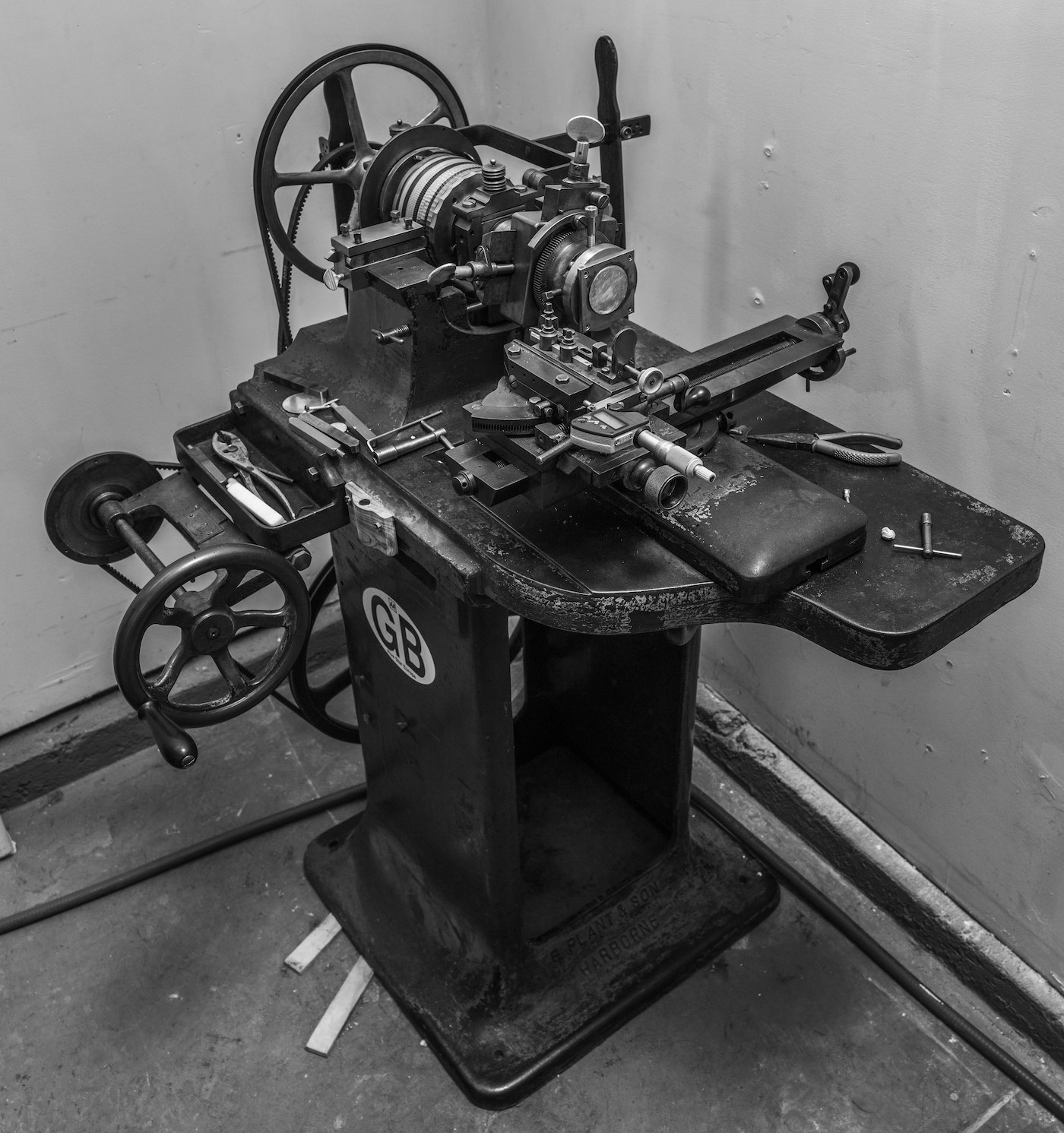 All of this happens in a workshop behind Shapiro’s LA home. The workshop has progressed and evolved much like Shapiro’s skills or one of his dials at a pace that is solely determined by the deliberate intention of making his vision a reality. It’s a distinctly American vision that hinges on the belief that the combination of passion and grit is far more potent than over-relying on provincialism and over-emphasizing provenance. 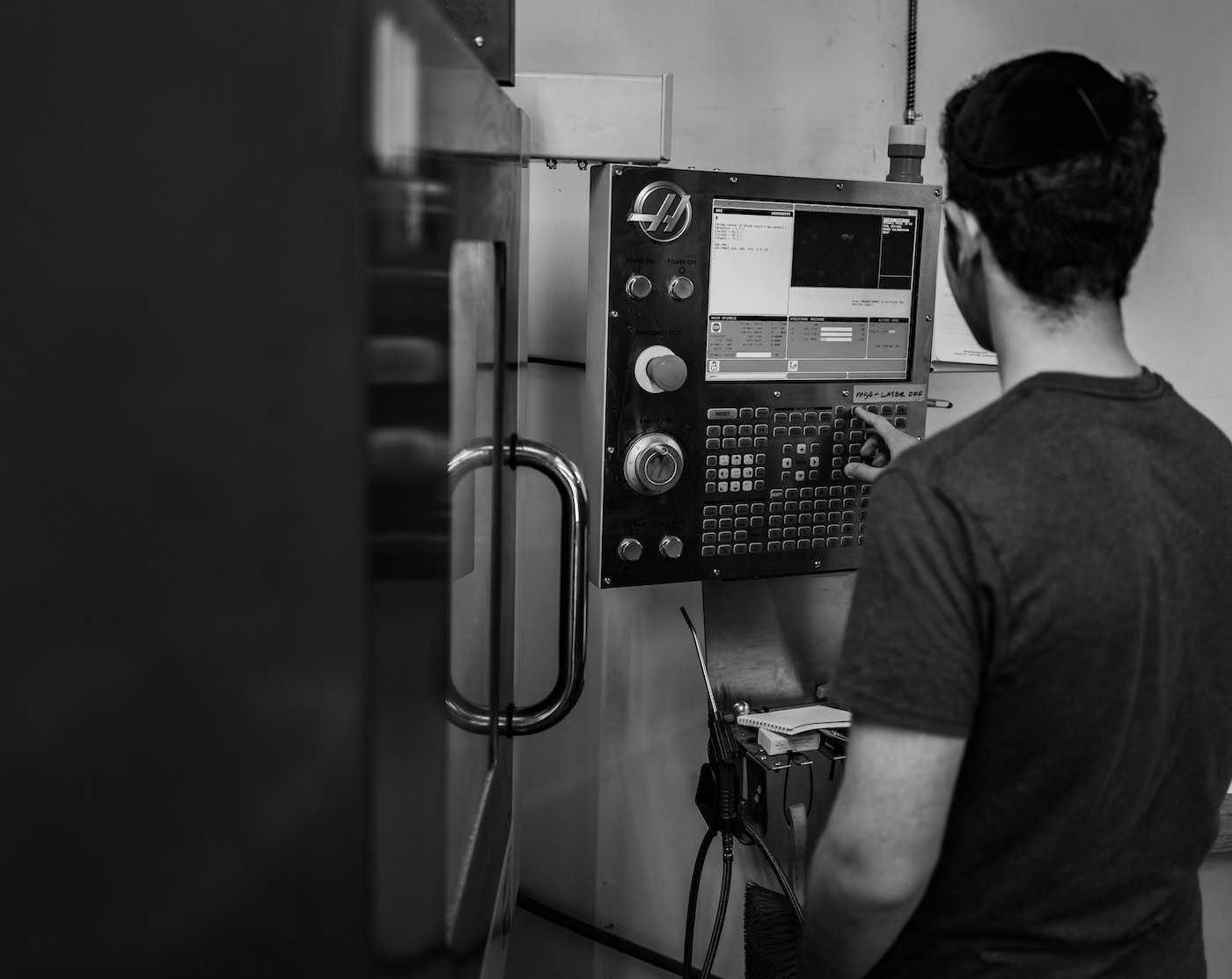 One of these additions to the workshop is a Haas CNC Machine that Shapiro uses for very specific purposes like prototyping movements, creating support fixtures for other machines used in the workshop, and creating some very small parts that also require a high tolerance. Obviously, Shapiro makes a point to emphasize how tight the parameters are when he decides to use the CNC machine since the manual hand-crafting he does with dials is the cornerstone of the J.N. Shapiro identity. 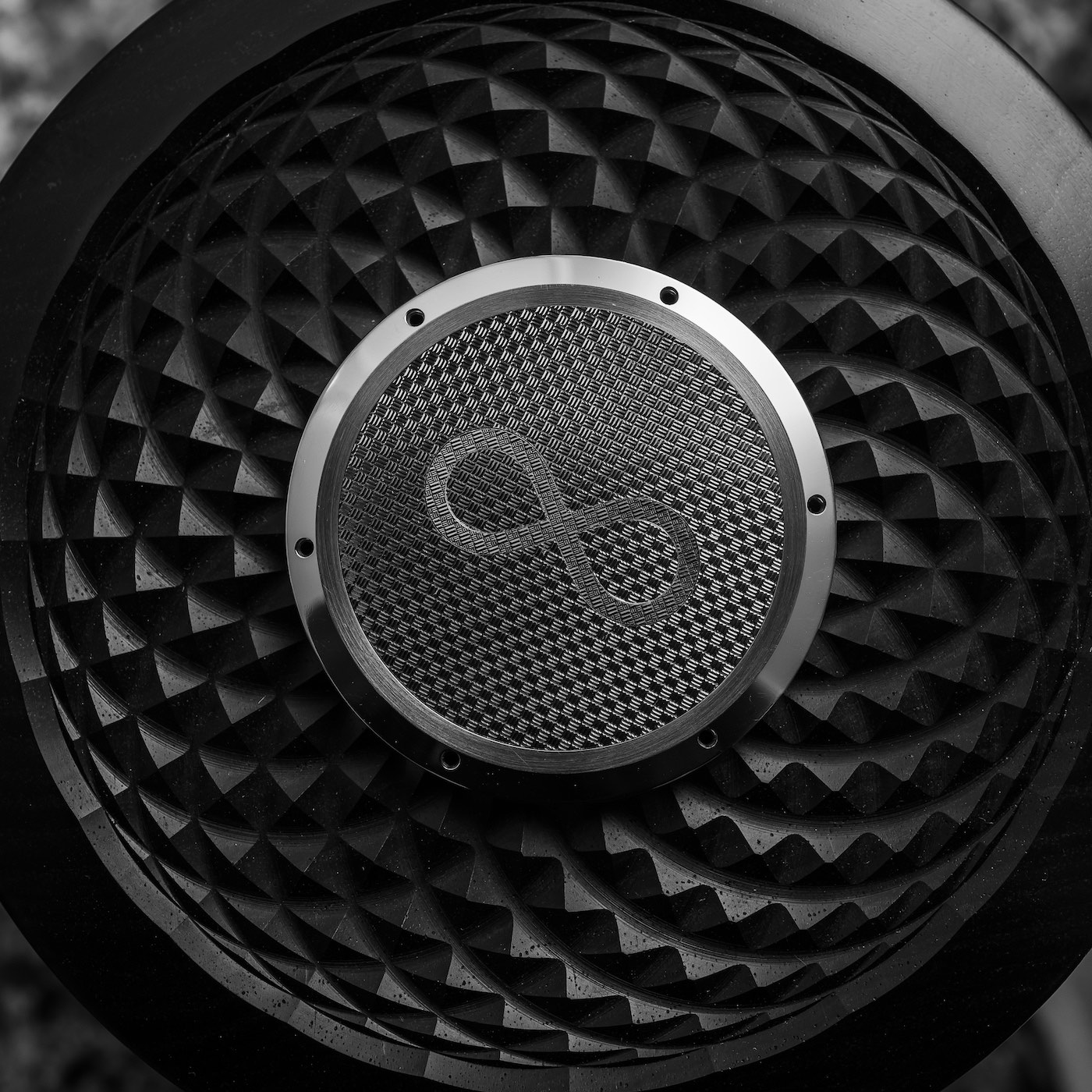 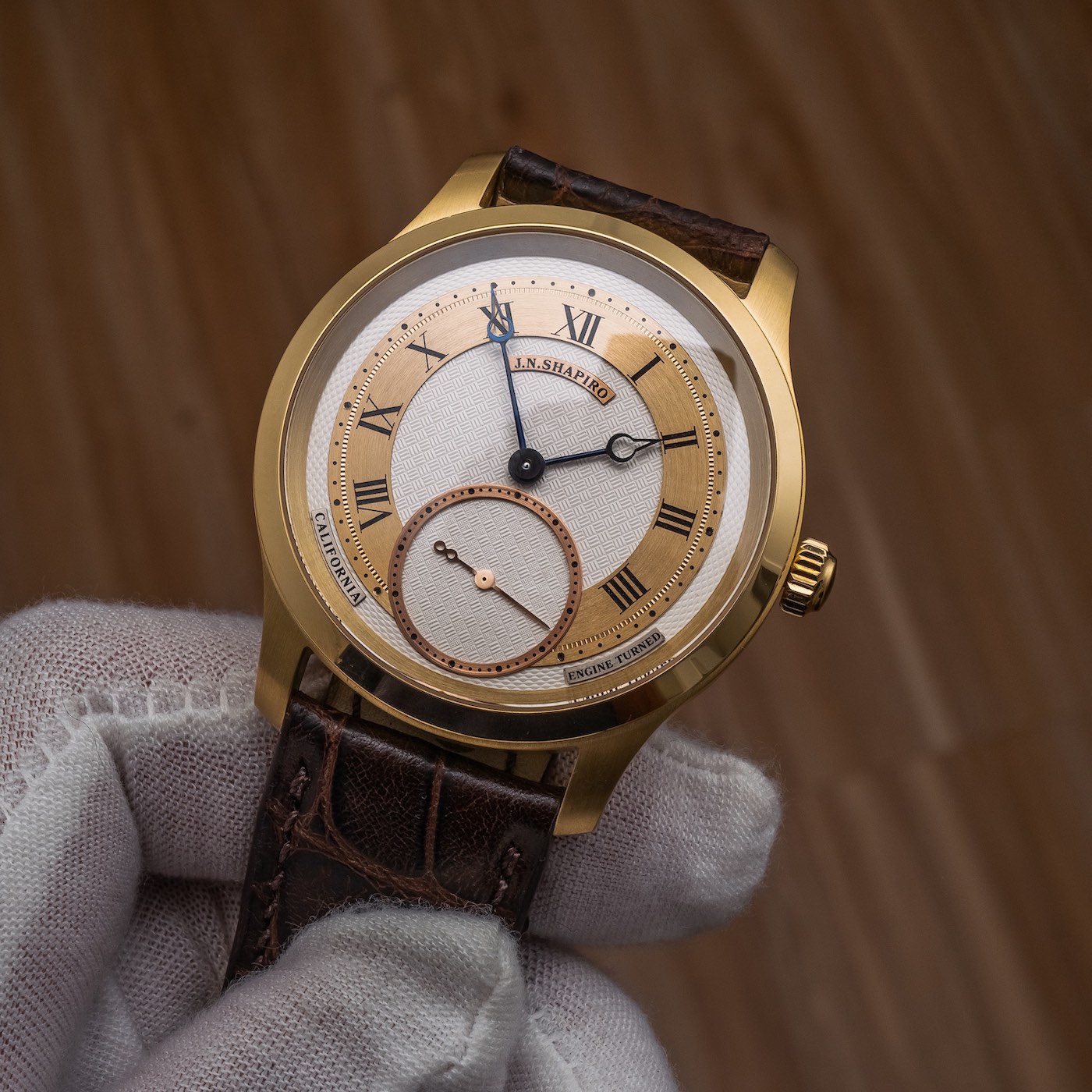 Still, it’s a big financial investment and a clear sign of the commitment to the long-term vision Shapiro has when it comes to the growth of his brand. Of course, “growth” is relative, and J.N. Shapiro is very much going to be an artisanal, small-batch production brand. Last year, Shapiro sold about a dozen watches and that number is set to more than double this year. 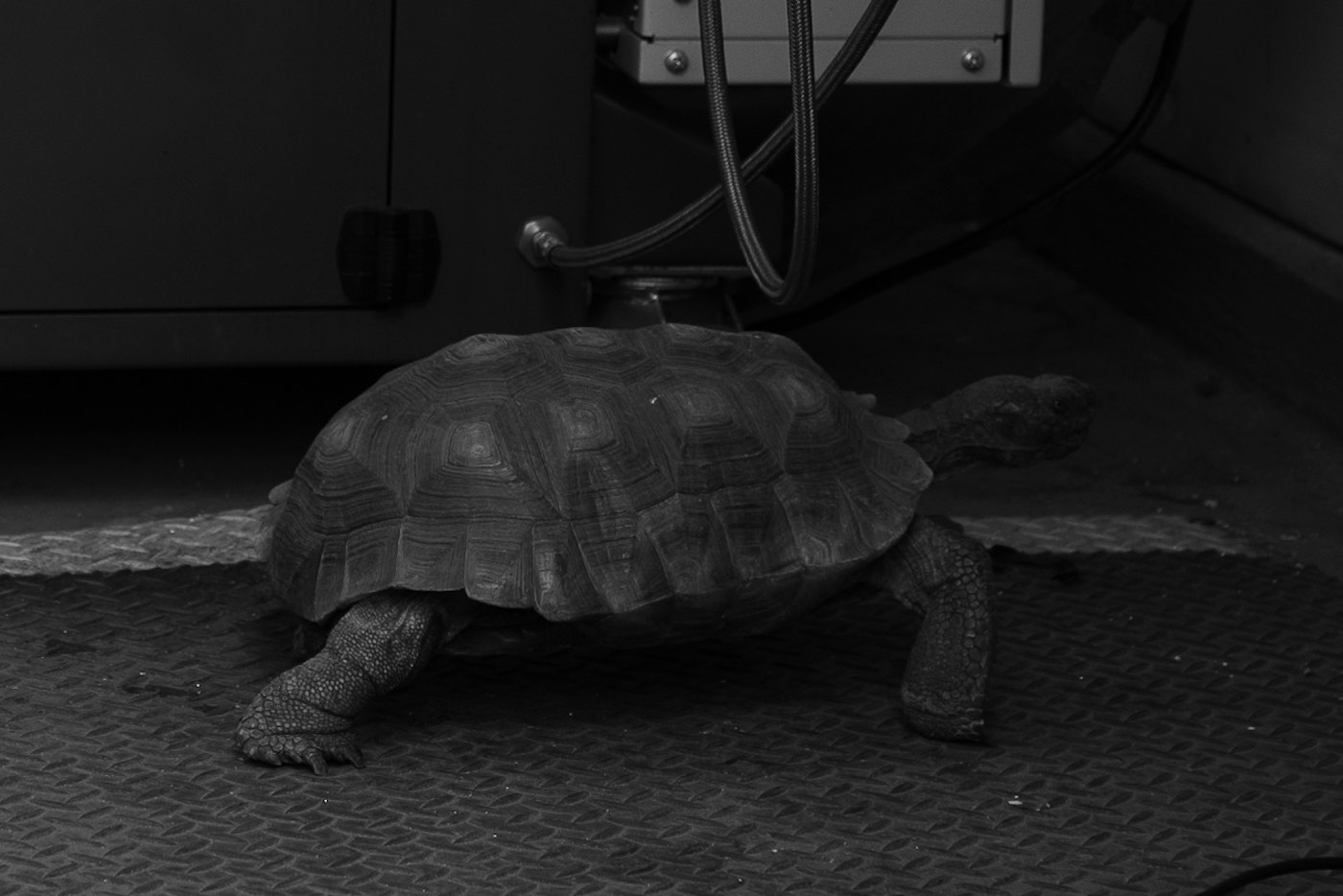 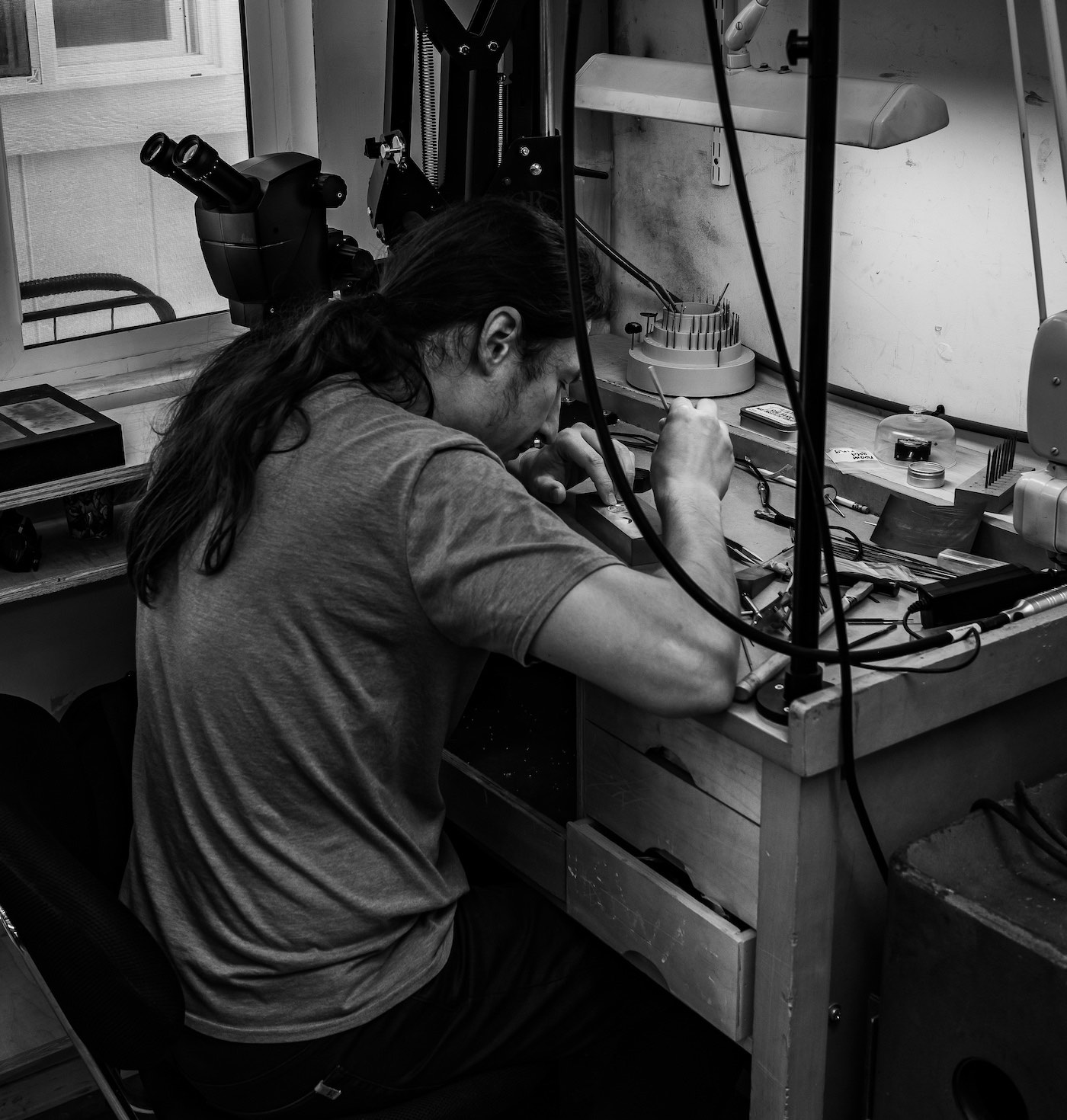 While that may not seem like a lot, you have to keep in mind that this is a small operation. Shapiro has done well enough to hire Artur Akmaev (found on Instagram here), who is himself a prodigious talent in engraving and enameling. Helping these two out are a couple of apprentices, young students with a passion for learning watchmaking who hail from the school in Los Angeles where Shapiro is Vice-Principal. (Yes, he has a full-time job on top of this.) Oh, there’s also a tortoise named Tank who patrols the workshop. 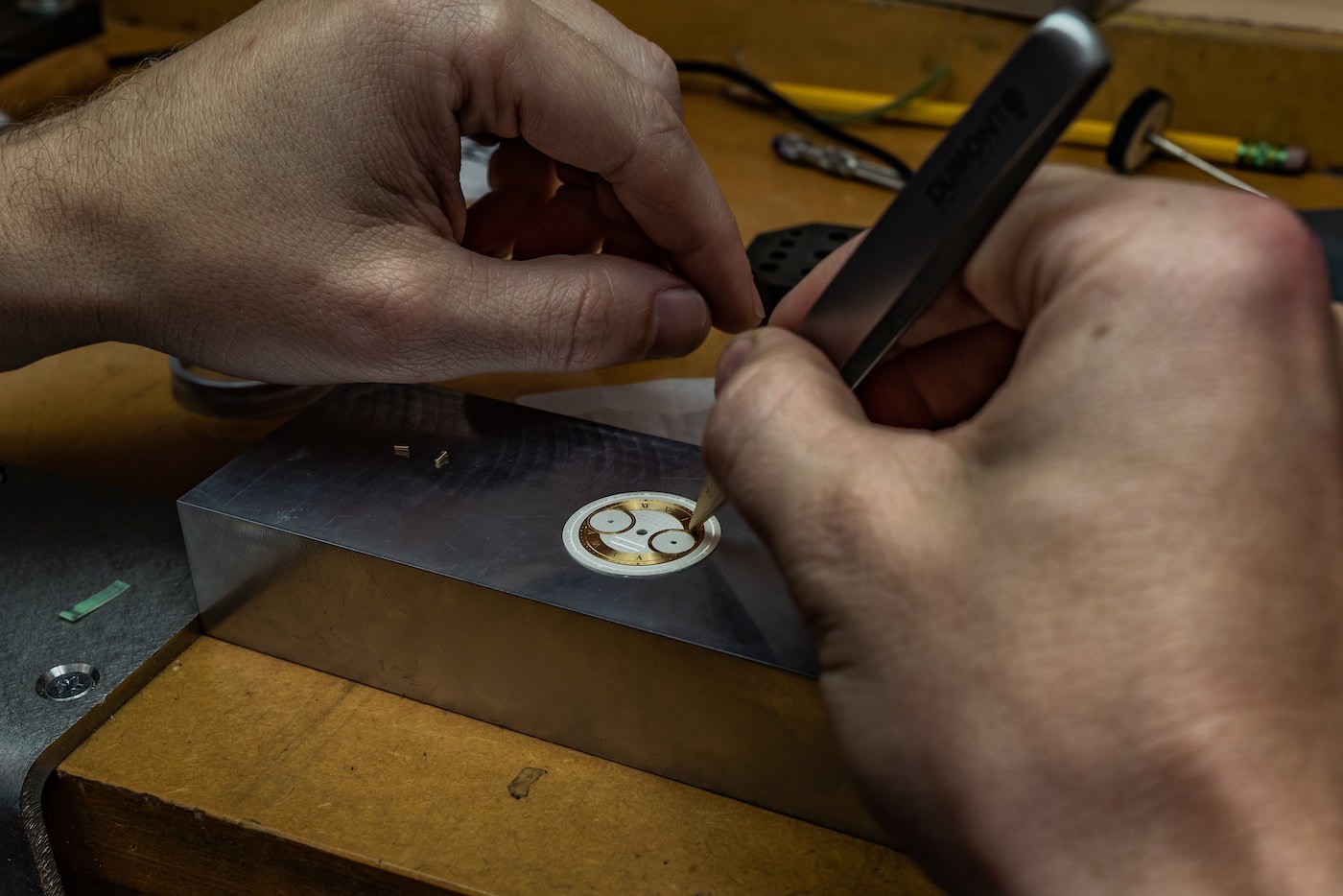 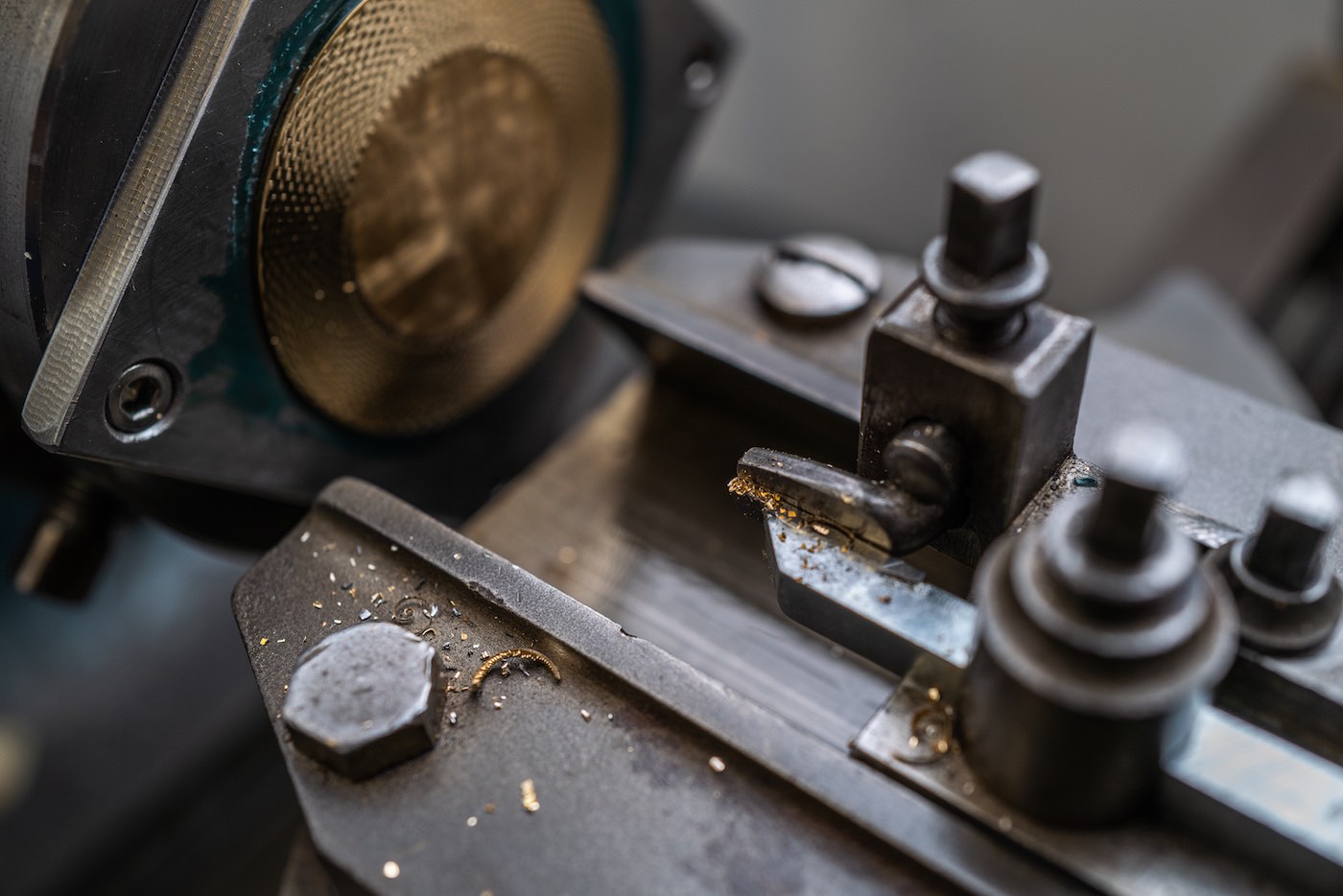 What’s the plan for the future beyond ramping up production? Well, Shapiro hopes to bring the movements and cases totally in-house, steps I know he is already in the process of prototyping. This goes back to the addition of sophisticated machinery like the Haas CNC machine, as well as the proficiency in using them. Again, this small group of individuals is doing all of this on their own in a small Los Angeles workshop thousands of miles away from Switzerland.

It’s no surprise that I’m an admirer of Shapiro’s work, and I was honored to spend a day in his workshop observing (and participating in) his process. I’m excited for the future of J.N. Shapiro and hope to share the brand’s development as time goes on. You can find J.N Shapiro on Instagram here and can learn more at jnshapirowatches.com.