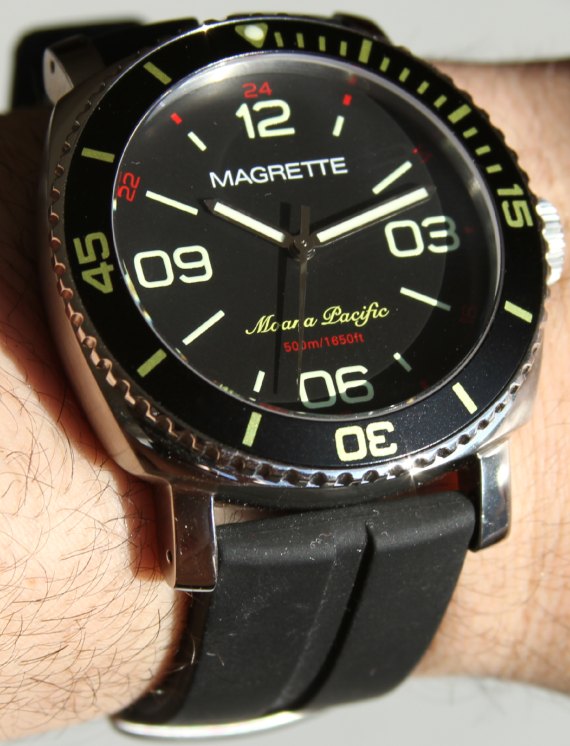 The dimensions of the two watches are quite similar each being 44 wide in steel cases, but you can see that differences abound aside from the polish styles. Still, they both hold their own visually, being different types of models for different occasions. Magrette chose to replace its screw bars to hold the straps in place with a pin. Actually I am very happy about this as pins make it much easier to switch out straps. The lugs themselves are also different. The Moana Pacific Diver comes with two straps. A nice black rubber diving strap and a textured black leather strap with red stitching. Having the pin in the lugs made it really easy to switch out the two. I have been wearing it on the rubber strap to match the sporty nature of the piece – plus it is very comfy with the rubber strap. The leather strap is nice as well and the red looks quite good in combo with the dial colors – not much else out there quite like it. You really rarely see a combo of black, yellow, and red on a watch dial. I like that Magrette did that. I should also note that the straps get new a style of buckles. Instead of the sometimes amusingly large Panerai style buckles, the Moana Pacific Diver has a more trim steel buckle that is more utilitarian and has a nicely engraved Magrette logo on it. 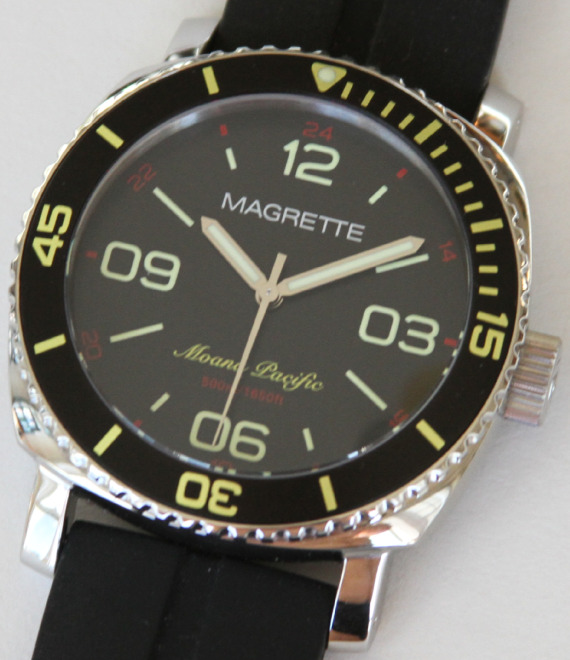 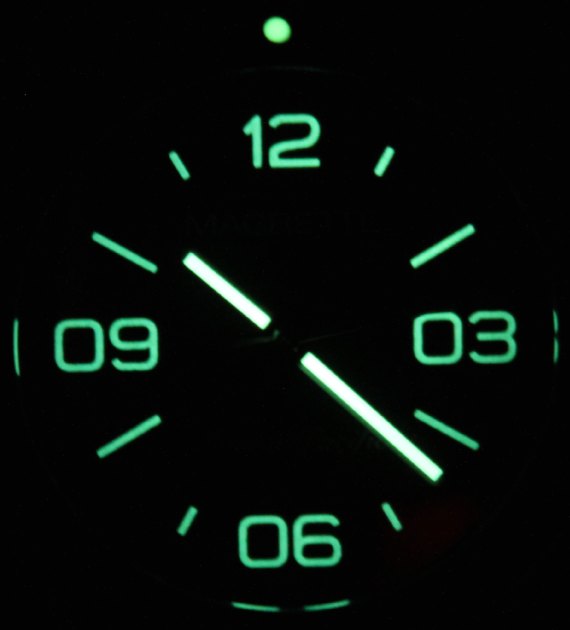 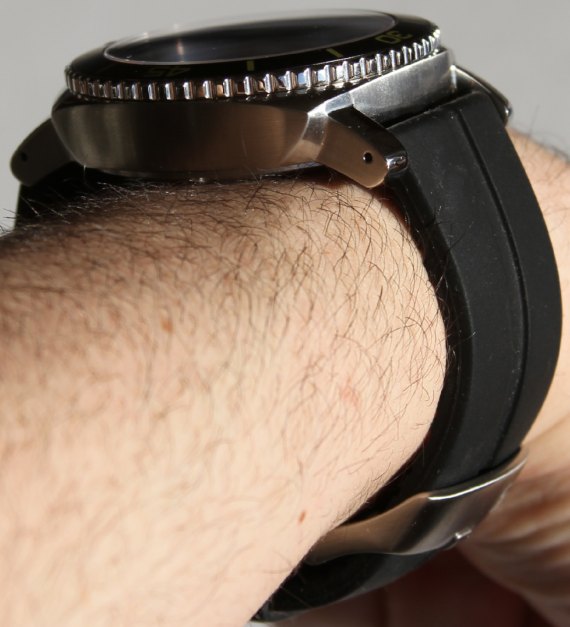 The watch case is a bit beefier as well and it has a solid looking rotating diver’s bezel. One issue with the bezel is that it is on the harder side to turn (though it wears in a bit with usage), but at least is isn’t loose and does not wiggle at all. The watch also has an upgraded crown that is larger, more precision cut, and has the Magrette logo in relief (as opposed to a simple laser cut). It looks better all around and again is a screw-in crown. There is also a new caseback cover that has a good quality look to its engraving and fits nicely. Overall I can say that the improvements here are all in the right direction. Plus, it all works together to give the Moana Pacific Diver a water resistance of 500 meters.

Let’s go to the dial. Comparing the shots of the classic Moana Pacific and the Diver you see that there is a lot of similarity. Though the indicators are thicker because they are applied with luminant, and that lume is high quality SuperLumiNova. Now the entire dial and the hands glow after being charged in some light. The yellow tones stand out and give the watch part of its retro sporty theme. I took a look at some older dive watches when thinking about that – and I get the whole “retro” style of it all. It is true that most older dive watches look still pretty modern, but it is also true that some modern dive watches have gone nuts with styling. So basically, conservative sporty looks are now mostly considered “retro.” The dial is in typical Magrette style with is Anonimo themed look, taken in a polished, designer direction. 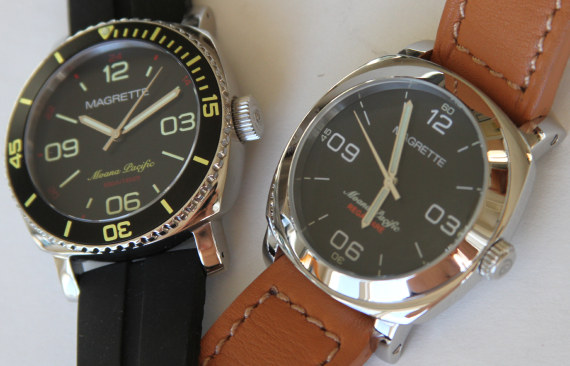 It looks like Magrette used a slightly flatter sapphire crystal, also with AR coating on the inside. Perhaps the crystal isn’t any flatter (hard to tell), it still has a slight dome to it. Regardless, it feels as though it reflects less light than before making the dial easier to read. This is another of the many incremental refinement and overall “polishing” treatment the watch line is getting.

The watch contains a Japanese Miyota 8125 automatic mechanical movement that offers hand-winding. I feel it is always necessary to indicate that with Japanese automatics. I recall the first Japanese automatic watch I got years ago. I though it was broken because it would not hand wind. Then I realized that it just wasn’t designed to hand-wind like every automatic Swiss movement. Thus, when I see movements such as the Miyota 8125 used, I want to point out that this is one of the nicer Japanese automatics out there. Magrette could have used a Swiss movement, but that just would have made the price appreciably jump. This way the watch, even with all its upgrades and nice features, the watch stays affordable. Like all Magrette watches, the Moana Pacific Diver is part of a limited edition – here of just 500 pieces. The brand from New Zealand continues to impress me as they move forward with quality and design, and staying true to the personality and laid-back spirit that makes their watches so easy to own. I do highly recommend the Moana Pacific Diver if you are looking for a capable sport watch that has an attractive style and good story. I mean just saying the watch is from a New Zealand company is often enough to get people interested I am finding. Keep it up Magrette! Price for the Magrette Moana Pacific Diver is $485 plus shipping.

Learn more about the Moana Pacific Diver or get one here from Magrette.