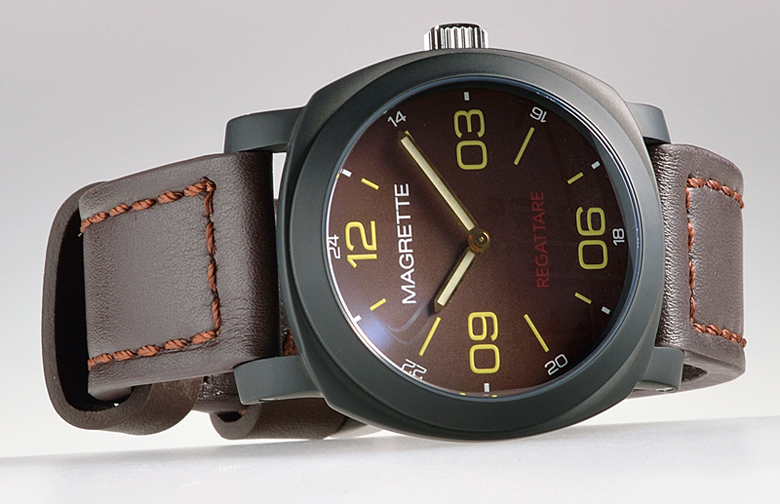 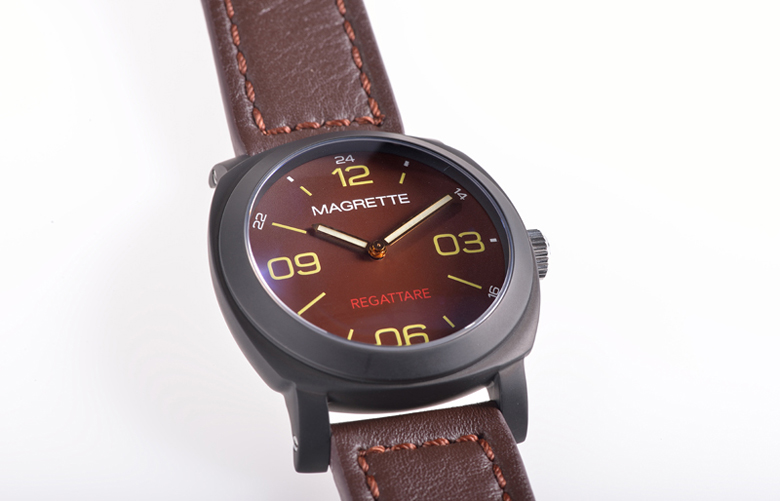 New Zealand is probably one of the last places in the world that comes to mind when you think of watches. However, this small country, tucked far away in the corner of the world, is home to Magrette Watches. Having reviewed a few of their watches in the past, we are no strangers to Magrette and we especially like their take on affordable and unique watches as well as some of their higher-end offerings sporting quirky-cool Maori art engravings. We now look at their most basic model to-date, an attractive mechanical watch with a price point under $400.

Their latest watch is called the Regattare Vintage, a watch which is based on the original Regattare but incorporates vintage-style design elements. The Regattare Vintage has a 44mm cushion-shaped case done in a style which reminds me of Panerai’s new Radiomir 1940 watches, but with much more sharply curved lugs. The case is made out of bead-blasted stainless steel and then given a PVD coating. One thing I noticed was that the screw down crown is not PVD treated and hence looks a tad out of place compared with the rest of the watch. Despite the stainless screw down crown, it must be noted that the watch is water resistant to just 30m (the standard Regattare is water resistant to 500m), so it’s probably best to be careful when around water.

Vintage design elements include what Magrette calls a “brown vintage style dial” that is decorated with large faded yellow hour numerals and indices, as well as the words “Magrette” just under 12 o’clock and “Regattare” above 6 o’clock. The position of the words give the dial a nicely balanced look. To complete the vintage look, the Regattare Vintage has gold hands with ecru lume and a slightly domed sapphire crystal. Although sapphire is highly scratch resistant and thus more practical, I believe an acrylic crystal would enhance the vintage credentials and qualities of the watch.

Powering the watch is a Miyota 8215, a non-hacking 21-jewel movement that beats at 21,600 bph. It’s nothing to shout about, but it is widely used and it is known to be a reliable and affordable movement. Miyota’s more accomplished 9015 movement would have been preferred, but that would probably drive costs up, so it’s a fair compromise. Having said that, Magrette does use the 9015 movement in some of their watches.

Speaking of which, the Magrette Regattare Vintage is the brand’s most affordable watch yet, carrying a $385 price tag (will be a bit more than $400 after shipping). If you are interested, you ought to act quick because the Regattare Vintage is limited to just one hundred pieces. The watch will come in a pinewood box, with a black canvas roll case and two additional straps. All in all, we think it’s pretty good value for money. magrette.com.