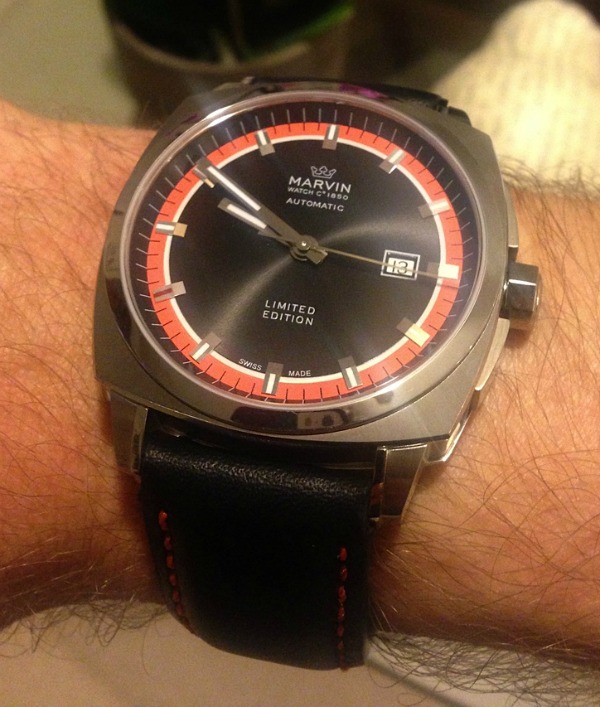 Thanks to Victor M. of Raleigh, North Carolina for this thorough follow-up review of a Marvin Malton Cushion watch he was the lucky winner of during the September 2012 aBlogtoRead.com monthly watch giveaway. The giveaway specified an M119 watch, but it looks like he was able to get an M120 Limited Edition model instead (similar but with different dial). Check out his details reviews below:

I recently received the Marvin M120 Limited Edition watch, having won the contest held by our host here at aBlogtoRead.com, Mr. Ariel Adams.

A BRIEF OVERVIEW OF THE MARVIN MALTON CUSHION COLLECTION

As Mr. Adams mentioned back when he first covered the M119 introduction, The M118, 119 and 120 series are the first in Marvin’s Malton Cushion cases. The largest difference between the models is that the M118 is a chronograph movement, M119 is the automatic 3-hand with Arabic numerals on the face in wide availability, and M120 has stick (baton) markers in limited editions.

Marvin seems to favor leather bands, both stitched with an accent color (M120) and inner padding with a perforated cover (M119). Two of the M119 models are available with a brushed and polished steel bracelet.

This brushed and polished combination stems from the case and bezel of all of the collection, excepting the PVD coated cases. The bezel is polished on all non-PVD steel cushion case watches, and the rest of the case is brushed in rays extending from the center to edge of the case. The lugs have a raised step that is polished. This is an unusual brushing pattern compared to the patterns on other watches, which usually brush the lugs in a path that follows the bezel.

The case back is a display back showing off the 26 jewel Swiss Sellita SW200 movement. The rotor is brushed in a ray pattern, and has the Marvin crown emblem in red, and is marked with two arrows showing rotation direction and the words “THE SWING”. The back is held on with four screws at the corners of the back.

I’ve never had a Sellita-equipped watch before, so I don’t know how to compare, but the movement from the rotor seems very loud. It’s very easy to hear the rotor moving around and if it were not brand new from the manufacture, I’d be concerned. [Ed. Note – this is not uncommon and has to do with things like case thickness and the bearings used. It does not present a problem aside from the sound.] 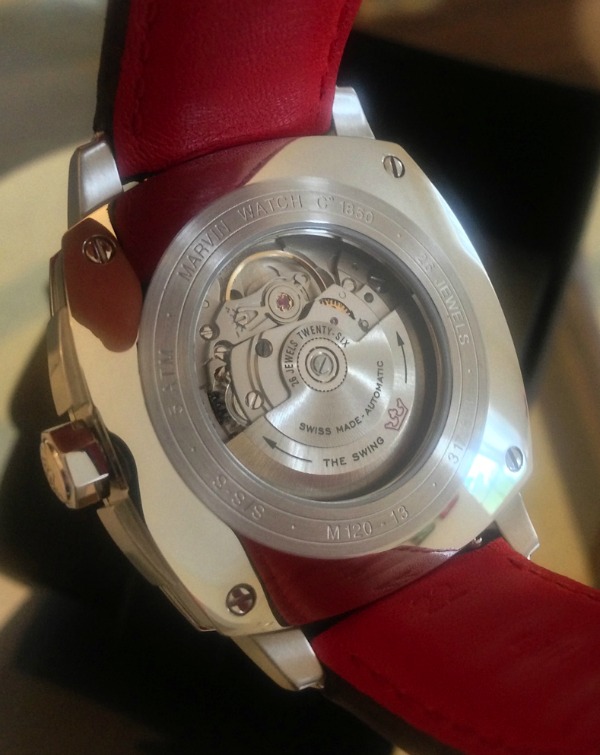 A BRIEF BACKGROUND ON MY WATCH HISTORY

I’ve never worn a cushion watch for any length of time. I’ve never really seen the cushion case as that popular; I’ve known people who wear Panerai, the quintessential cushion case watch, and I’ve known a man who wears a Wenger because he can’t afford a Panerai, but outside of that the people I’m surrounded by wear a mix of Rolex, Casio, DKNY, and other fashion watches. My daily go-to is a Seiko SKX-007 on steel bracelet modified with MKII dial and plo-prof hands and a 24h bezel that I use as a GMT time zone (adjust hours to second time zone, divide the 24 marker by 2 to get the hour in the second time zone.) I travel frequently and never dive. The diver’s bezel will never save my life.

Other watches I wear are a titanium Jünkers GMT (quartz) and a MKII LRRP GMT that looks like a Rolex 1655 with the big orange hand, but with a GMT bezel instead of the Explorer II capstone. The short version is that I favor somewhat classy retro tool watches with an emphasis on complications that I actually use. I’m not wedded to features I need exclusively – one of my favorites is the original Milgauss 6541 second hand.

I received the M120.13.49.64 which Marvin describes as being inspired by a 1950s vintage model with modern Marvin Cushion DNA. This explains why it is so appealing to me. It’s very tasteful, with black dial, stick markers and a white and orange ring at the edge containing the black minute marks. The minute marks continue in white onto the black chapter ring/rehaut.

Besides being beautifully uncluttered, it’s very readable. The hands extend long enough, with the minute hand stopping at the edge of the dial. The hour hand stops about 2mm short of the hour marker. The
markers and hands are all lumed, excepting the 8 o’clock marker which has red in place of lume. This is a Marvin brand hallmark. I know that it’s not a dress watch, but it’s as close as I’ve come so far, and it will fit nicely with my business meetings, although it’s definitely not a slim watch for hiding under the sleeve cuff.

One thing I noticed immediately about wearing the Marvin is that the crown does not screw down. It’s been years since I’ve had an automatic watch where the crown winds the watch when it is pushed in. I had to discover this. The watch arrived with no literature at all other than a small card inviting me to go to the Marvin Watches website. Registering the watch with them causes them to give 8 Swiss francs support to non-governmental charitable organizations.

The watch case is 42mm. It feels very comfortable, and I’m used to wearing a steel bracelet and, excepting the Seiko, a smaller 39mm size case. On the whole, it feels –right–. It isn’t too heavy, and it’s not too large.

The leather band is very well made. It has orange stitching that matches the dial, and is lined with red leather on the inside. These hidden details that are shared secrets between designer and wearer really resonate with me. Details matter. They show the manufacturer respects the product and respects the end user. The buckle has the Marvin crown emblem, which looks like an ‘M’ when inverted. The buckle is also a combination of brushed and polished surfaces. I’m not sure why, but the band has two metal studs sticking out of the band at the spring bar. What are these for? Why are they present? It seems like they could mark up the case. [Ed. Note – these are quick change levers for removing the straps easily when you want to change the strap without using a tool.]

Other details worth noting are the M Crown on the end of the octagonal crown, and the initials of the founders of the manufacture on the side of the case opposite the crown. 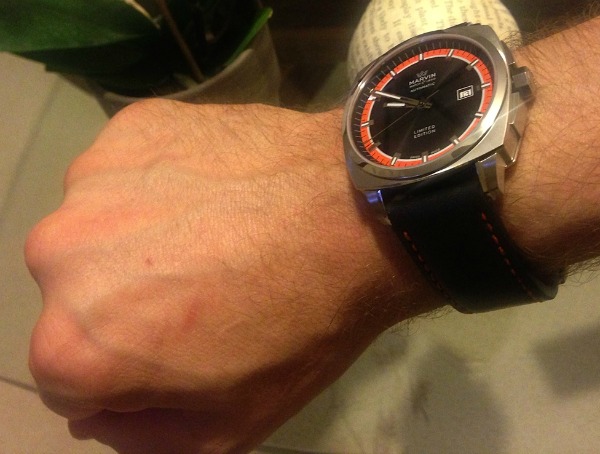 A WORD ON PACKAGING

Packaging is one of the things manufacturers in any product space look to as a cost savings first. Some manufacturers will work backwards from their MSRP goal and use cheap packaging in an effort to put all available money into the product and still make a profit. Other manufacturers will adjust the MSRP up so that they can offer the product they really want to make and a package that does it justice.

Marvin made the right choice. It’s a pleasant surprise opening a package and seeing that it honors the product it contains. Marvin sent the watch in a brown cardboard box that had the curious closure of plastic strapping like you’d use on a much heavier box or a lot of lumber. Overkill is a good thing. Inside, the display box was wrapped in white tissue.

The top of the box slides off like a sleeve. The inner box has a side that folds down revealing a drawer that could contain documentation, warranty cards – none of which were included.

The watch itself is held in a leather covered oval with a magnetic closure. Magnets and leather are a sign of the money spent on the packaging. Opening the box, I knew I was opening something special. Inside, the watch rests gently strapped to a small pillow. This is a sign of designers who honor their work and honor their customers.

Thank you, Mr. Adams and Marvin for the watch and the opportunity to write about it. I’ll enjoy it for a long time to come.