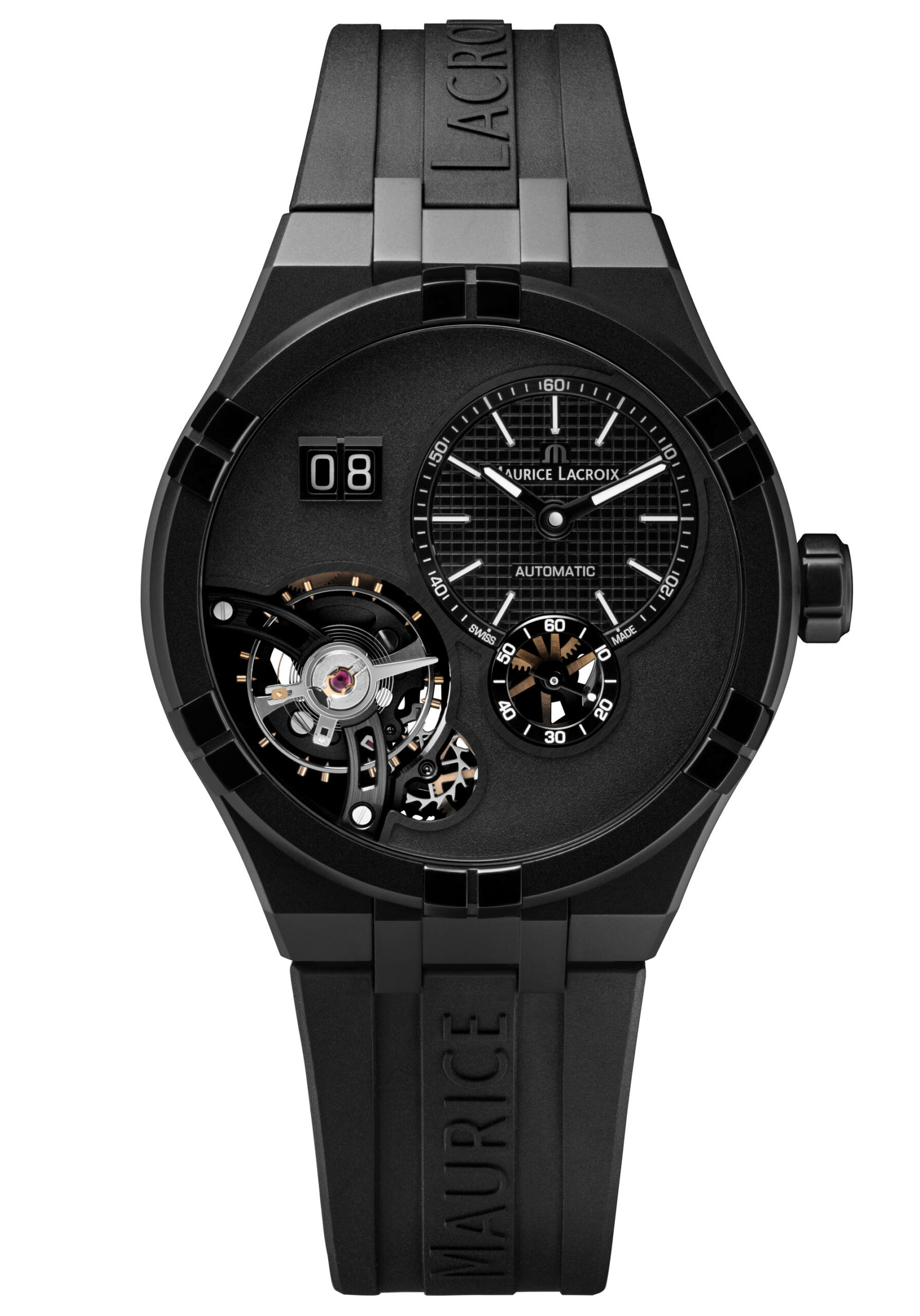 In 2021, Maurice Lacroix debuted the Aikon Master Grand Date, which combined the signature sporty design language of the brand’s popular Aikon collection with an in-house movement and the mechanical design emphasis that is typically characteristic of its Masterpiece lineup of watches. While that original model featured a stainless steel case with a blue dial and the option of either a stainless steel bracelet or matching blue strap, the latest new release from Maurice Lacroix is the Aikon Master Grand Date Black, which offers a fresh take on the flagship model from last year, and it features a largely jet black color profile with small contrasting elements in bright white and polished metal. 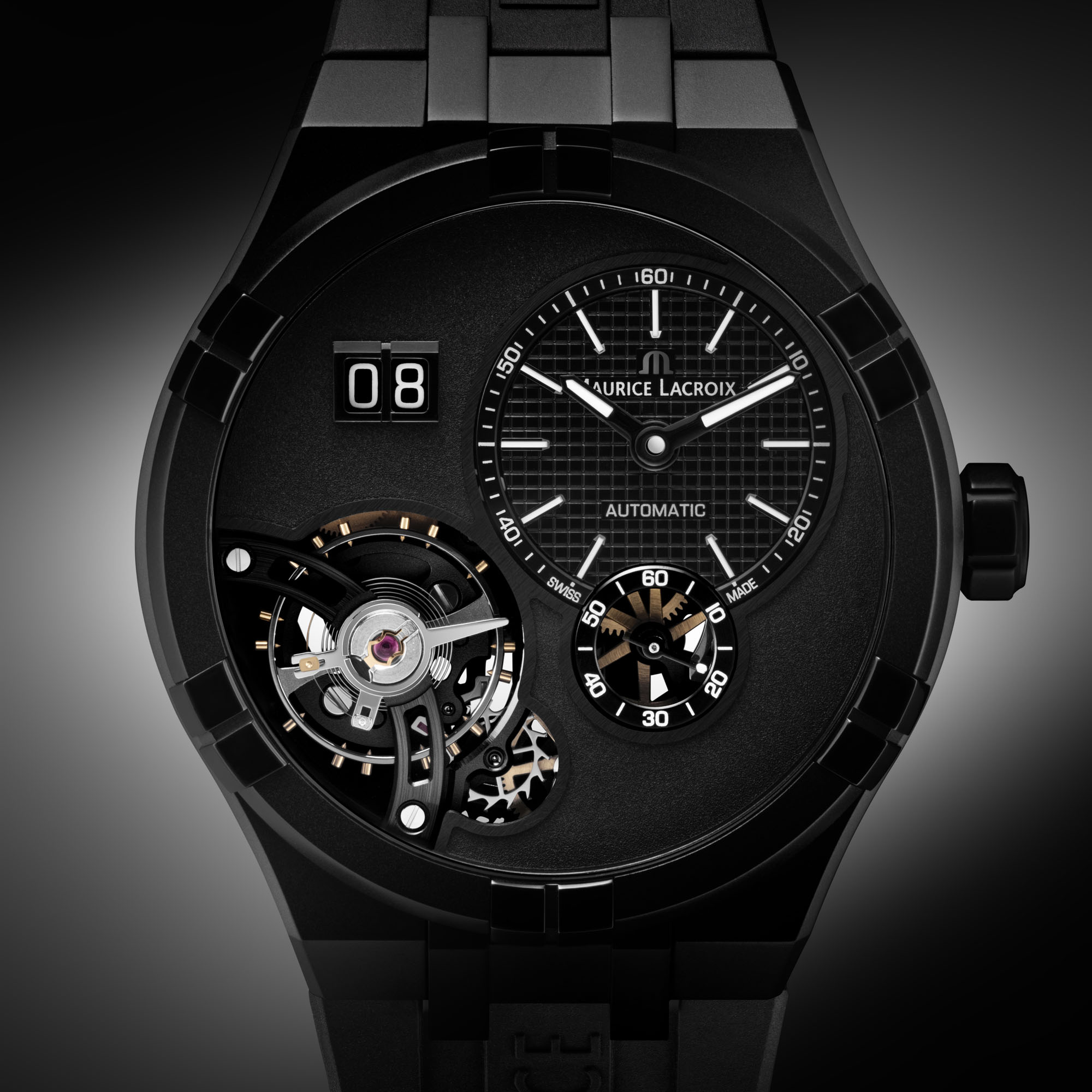 Just like the watch that was unveiled last year, the new Maurice Lacroix Aikon Master Grand Date Black features a 45mm stainless steel case, which makes it the largest Aikon model currently available. The case itself offers the Aikon collection’s signature design with a rounded angular shape, integrated lugs, and the same bezel that can be found across the series, which features six “claws” along its perimeter for a distinct overall appearance. However, rather than appearing in a mix of brushed and polished steel surfaces, the case of the new Aikon Master Grand Date Black features a black DLC finish. With that in mind, just like the previous edition, a sapphire crystal protects the dial side of the watch, while a signed crown at 3 o’clock works in conjunction with a screw-on display style caseback to help provide users with 100 meters of water resistance. 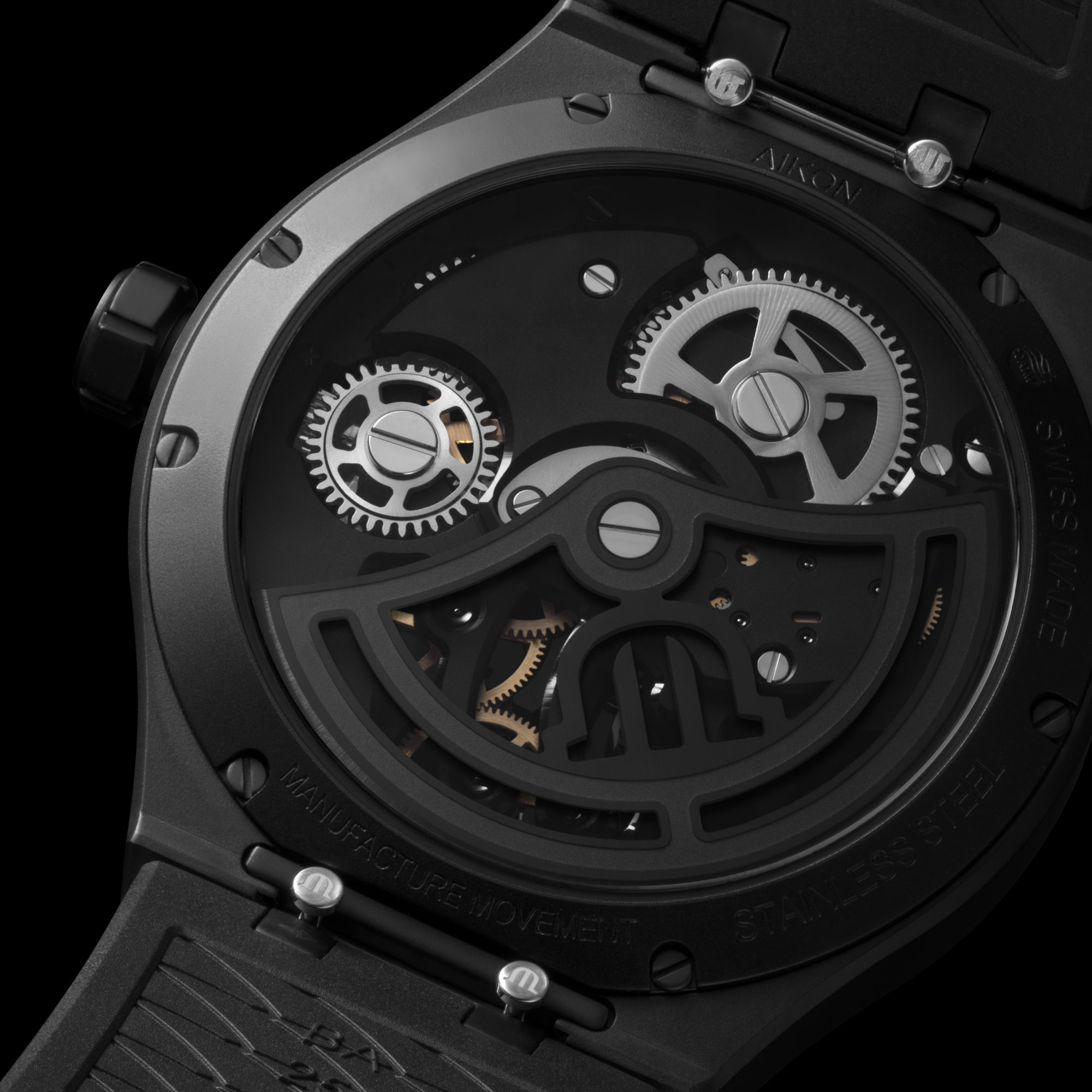 Although the overall dial layout of the new Maurice Lacroix Aikon Master Grand Date Black is identical to the stainless steel edition from last year, the fact that it appears in the same color as its case ultimately results in a significantly different overall aesthetic. Set against a vertically brushed black DLC surface is a small offset dial in the upper right-hand corner that is decorated with a Clous de Paris pattern and displays the hours and minutes, while a smaller circular register dedicated to the running seconds overlaps with the bottom edge. In the upper right-hand corner is a large double-digit date display, and sitting directly below it is an asymmetric aperture that reveals the sizable balance wheel and the skeletonized bridge that holds it in place. To offer added contrast against the monochromatic black display, the pointed baton-shaped hands and hour markers are finished with white luminous material, and this also has the added benefit of increasing legibility when viewing the watch in low-light conditions. 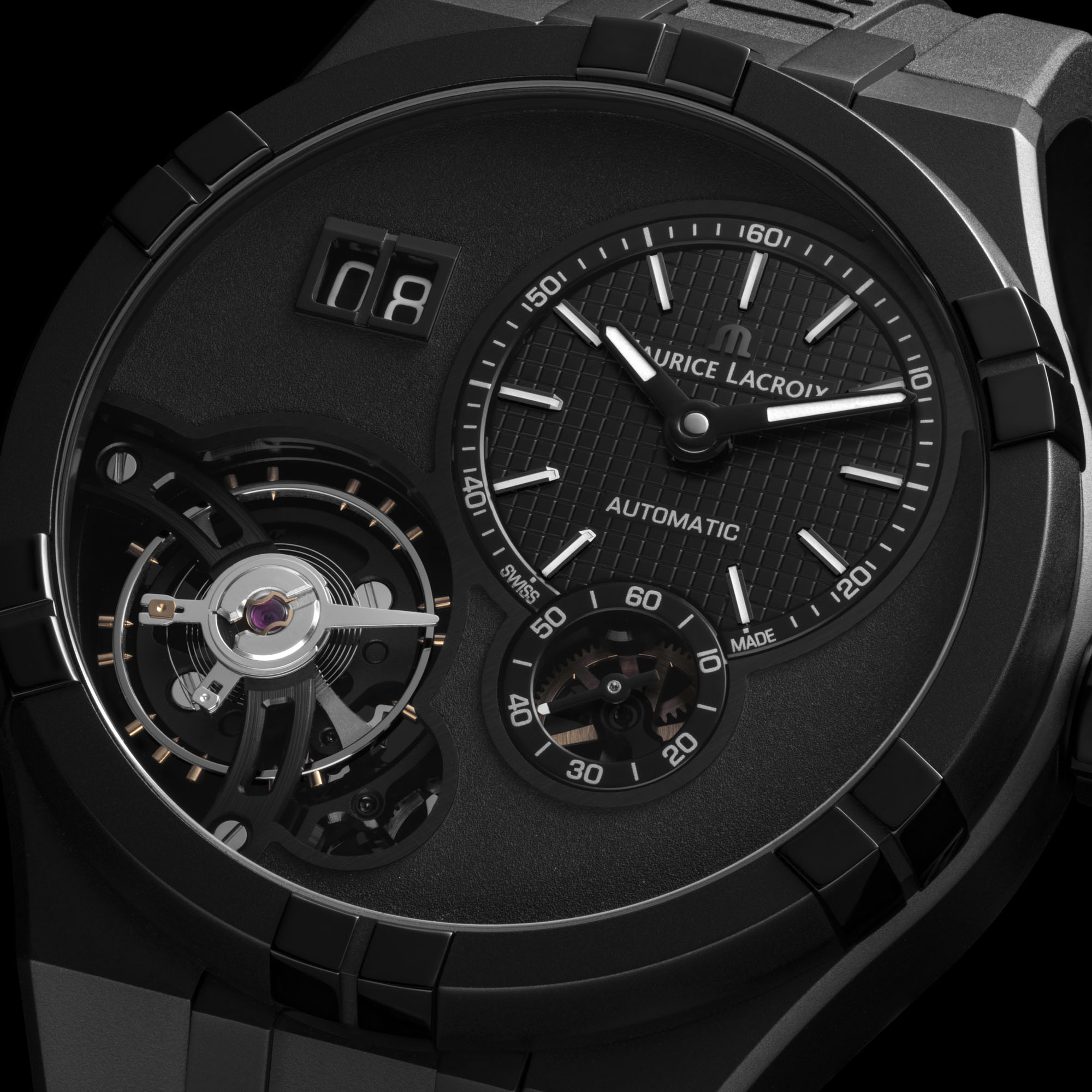 Powering the Maurice Lacroix Aikon Master Grand Date Black is the brand’s in-house Caliber ML331 automatic movement, which is the same movement featured in the stainless steel model from last year, although the version fitted to the new watch features different finishing to match is all-black color profile. Both versions of the movement feature bridges with sandblasted surfaces, but while they were left in their natural color on the previous version, they have been given a black DLC finish on this version for a cohesive overall appearance. That said, the design of the movement itself is identical, and it runs at a frequency of 18,000vph (2.5 Hz) while offering users a power reserve of approximately 50 hours. Additionally, the Maurice Lacroix Cal. ML331 utilizes a traditional style of balance and regulator, which features a large balance wheel with individual screw weights placed along the perimeter that can be adjusted by a watchmaker in order to achieve optimal performance. Due to the fact that this style of balance wheel does not lend itself well to mass production, seldom do you see them featured on modern watches, and the Maurice Lacroix Aikon Master Grand Date Black makes this feature visible on both sides of the watch. 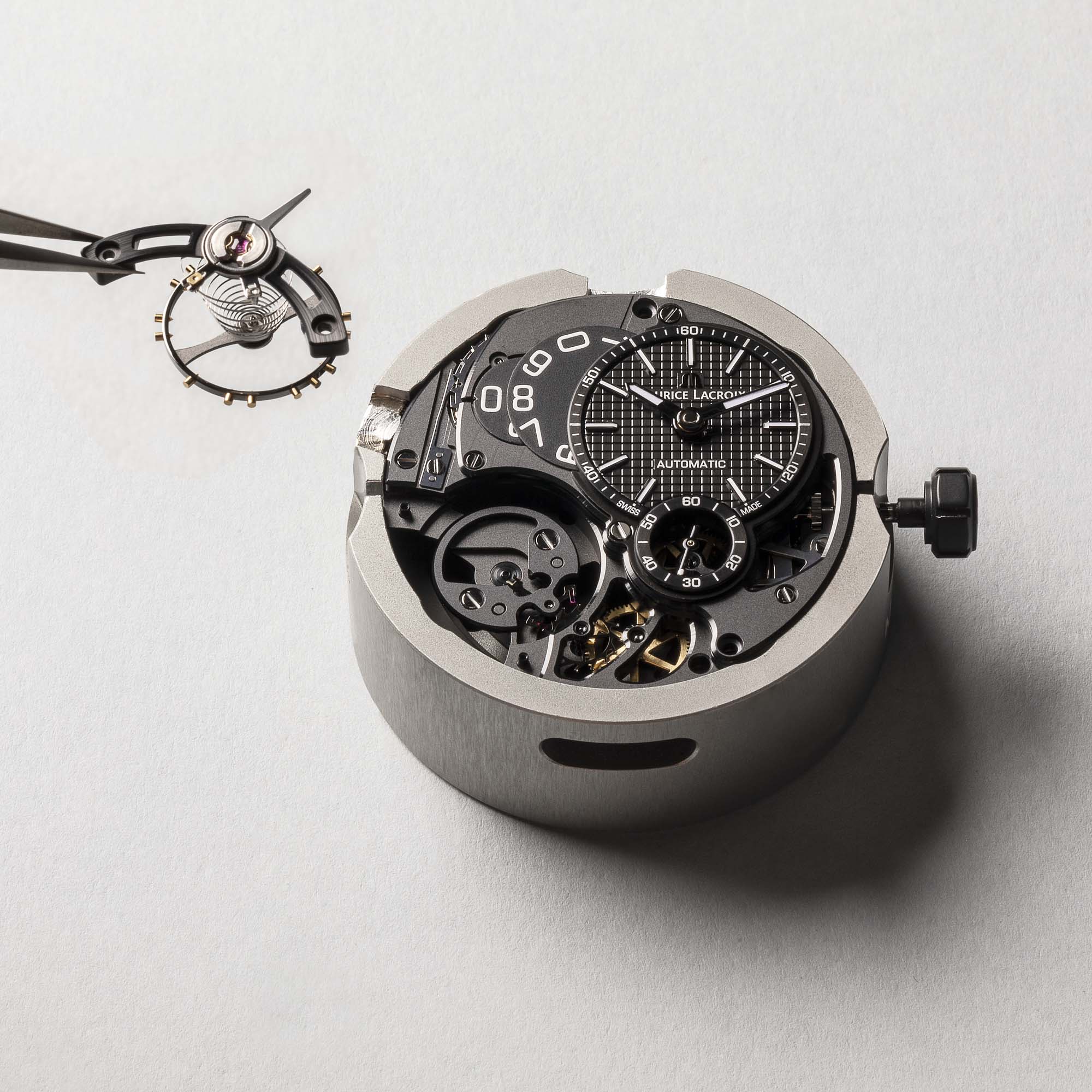 Unlike the stainless steel model that debuted last year, the new black DLC version of the Maurice Lacroix Aikon Master Grand Date isn’t available with a matching metal bracelet. Instead, the new model is exclusively fitted with a rubber strap that features the Maurice Lacroix name in relief, and it also includes an optional secondary strap that is made from black synthetic leather with a unique textile effect on its outer surface that incorporates the brand’s signature ‘M’ logo. Additionally, both of the included straps attach to the case of the Maurice Lacroix Aikon Master Grand Date Black with the brand’s Easy Strap Exchange system, which enables instantaneous strap changes that permit you to quickly switch up the look and feel of your watch, completely on the fly and without the use of any tools. That being said, both versions of the step are completed by stainless steel push-button deployant clasp that feature a black PVD finish to match the case of the watch. 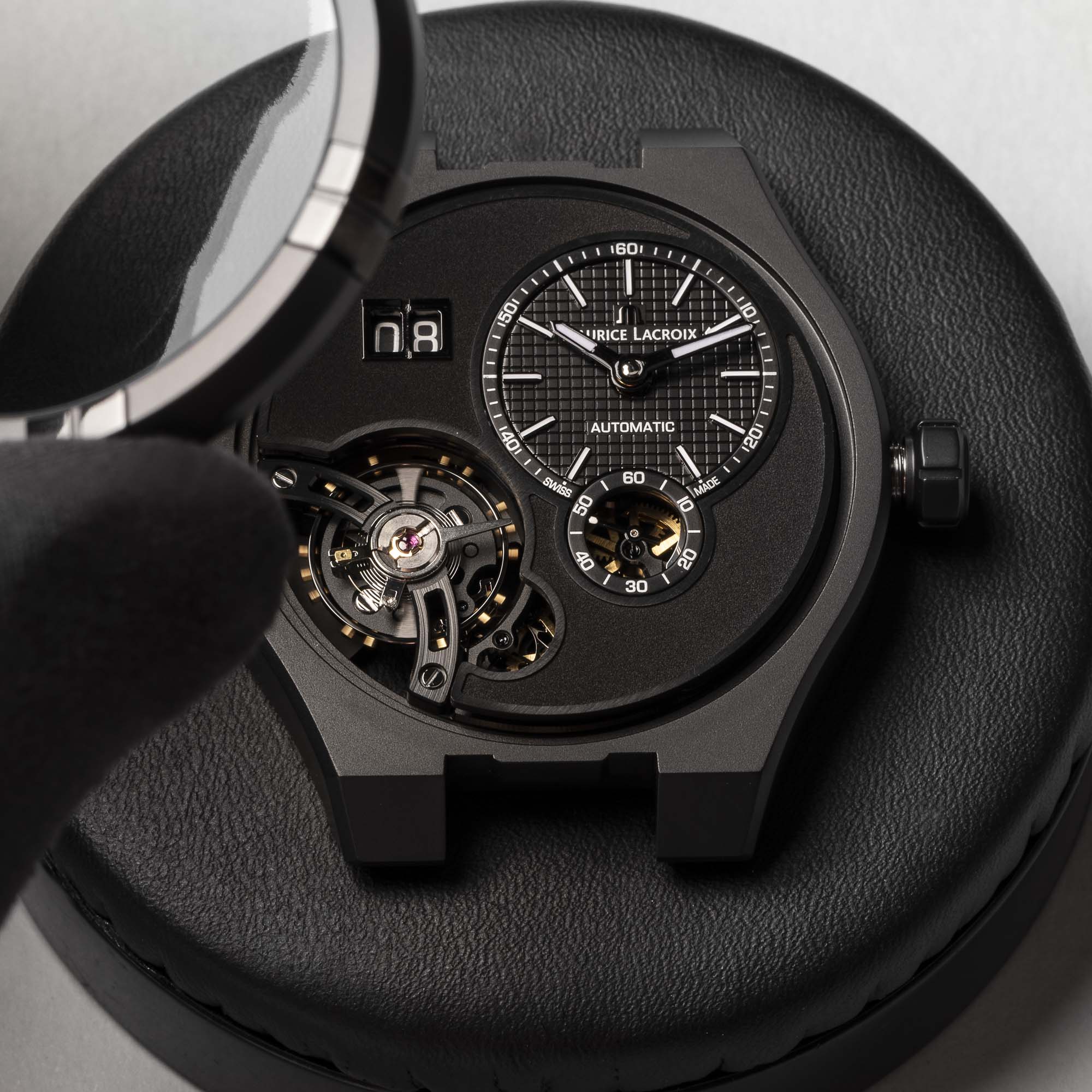 When it first debuted last year, the Maurice Lacroix Aikon Master Grand Date was the largest and most expensive model from the Aikon collection, with most options coming in closer to the 39mm to 42mm range and priced at less than half its cost. That said, the new Maurice Lacroix Aikon Master Grand Date Black now claims this title with the same 45mm case as its predecessor, but with an official retail price of $8,500 USD. Admittedly, this does seem quite expensive when you consider that the standard 42mm Aikon model retails for just north of $2k and even the chronograph versions can be purchased for less than $4k. However, it’s important to remember that the Aikon Master Grand Date Black is powered by one of Maurice Lacroix’s in-house movements, and everything from its layout to the way that it chooses to present its information is entirely unlike anything else that exists within the Aikon lineup. Despite offering the Aikon collection’s signature aesthetic, the new model is really more in-line with the brand’s Masterpiece series, which consists of more elevated options that are frequently priced anywhere between $5k and $10k, and which represent the very best that Maurice Lacroix has to offer. For more information, please visit the brand’s website.