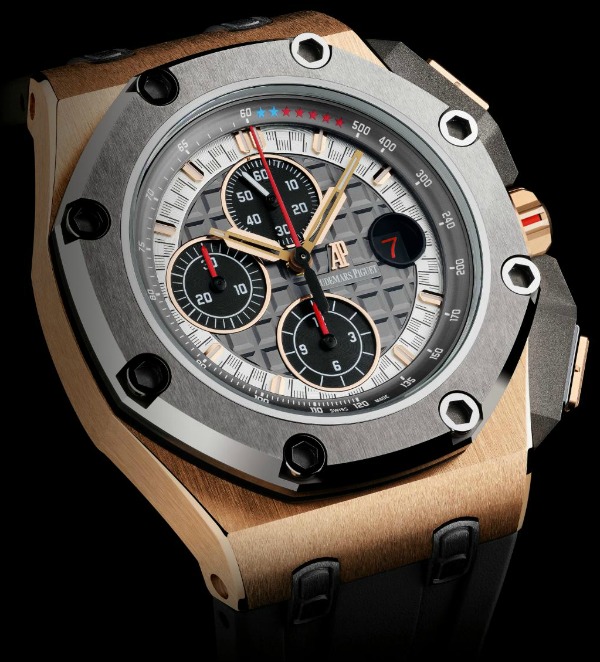 As famed Formula 1 race car driver Michael Schumacher announced his retirement, Audemars Piguet also announced his new limited edition watch. A few days ago I debuted the Royal Oak Offshore Michael Schumacher Limited Edition watch here via Forbes. You can visit that post for details on the watch as well as more images. Here I’d like to offer some thoughts, humor, and more views of the watch itself.

It was about two years ago that Audemars Piguet announced their relationship with Schumacher – and they were damn proud. Schumacher is an excellent addition to their roster of sport champions, with Schumacher himself likely looking for a new watch brand partner at the time. While I don’t know for sure, it is possible that Audemars Piguet and Hublot rivaled over the championship driver – as they have with some other people or events in the past. While not the first racer with an AP watch to their name, Michael Schumacher is likely one of the most well-known. It took two years to finally get his first limited edition watch. Perhaps AP was waiting for Mike to announce his retirement from racing, but that is hard to say. What everyone did expect was for the eventual watch to be based on the Royal Oak Offshore, and for it to extend the modern design of the collection. It most certainly does that. At 44mm wide it is not huge by today’s standards, but sits large on the wrist because of the wide lugs and chronograph pushers that make the case almost square-shaped. You can get a good idea of the size by seeing it on Schumacher’s frame in the pictures.

Audemars Piguet did a nice little photo shoot with him for the watch debut campaign. I loved the almost creepy picture of him holding his jacket collar all 80’s style. That pose along with Schumacher’s appearance make him a dead ringer for Blade Runner’s Roy (played by Rutger Hauer). Though I don’t think that Schumacher is an android. We’ll have to check on that. The limited edition Royal Oak Offshore watches have a mere taste of Schumacher as opposed to his personality all over it. Sure you have his signature on the black-colored gold rotor of the automatic movement and the seven stars on the dial to represent his championships – but this is really just another flavor of ROO. Don’t get me wrong, that is a good thing. Audemars Piguet’s Octavio Garcia uses opportunities like this to play around with design ideas that would never be possible in unlimited pieces. You see a new style of hands which are sure to delight or annoy hardcore Royal Oak Offshore fans. Little touches of red mark the piece such as for the date font color and red on the crown.

As I mentioned in the Forbes article I think it is interesting that the minute scale is done in that “racing flag” style which is the same style used in limited edition Michael Schumacher Omega Speedmaster watches of the past. I tend to think this was Michael’s input as it doesn’t seem likely Audemars Piguet wanted to mimic the Omega pieces. But that is just a guess. Fans of the brands seemed mixed on the design of the watch. No one seemed to dislike it, but after all the waiting I think a few people wanted to see something a bit more unique and special given Schumacher’s status. Aside from the design there is nothing unique in terms of the movement or the materials. Audemars Piguet collectors and race fans of an elite status will find enough to enjoy. With the limited edition status and its cool sport watch look, this Royal Oak Offshore is a conservative but satisfying homage to Schumacher’s career. We will be seeing more of this guy in the Audemars Piguet context in the years to come. The case has a cermet (ceramic metallic hybrid) bezel and will come in either titanium, 18k rose gold, or platinum with a caliber 3126/3840 automatic chronograph movement. Price for the pieces will be (titanium ref. 26568IM) $42,500, (rose gold ref. 26568OM) $75,000, and (platinum ref. 26568PM) $110,000. Or in other words around the price of a speeding ticket in Switzerland for those with the necessary income to afford them.