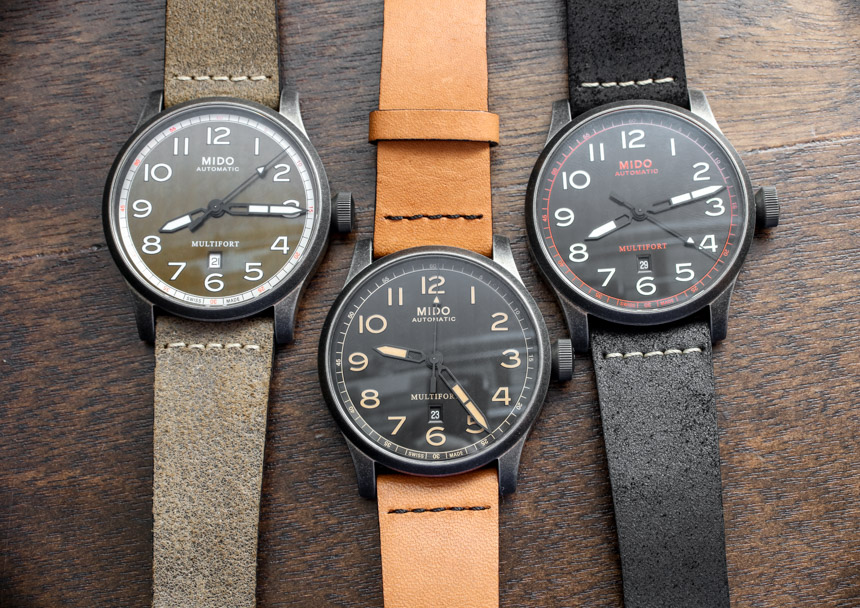 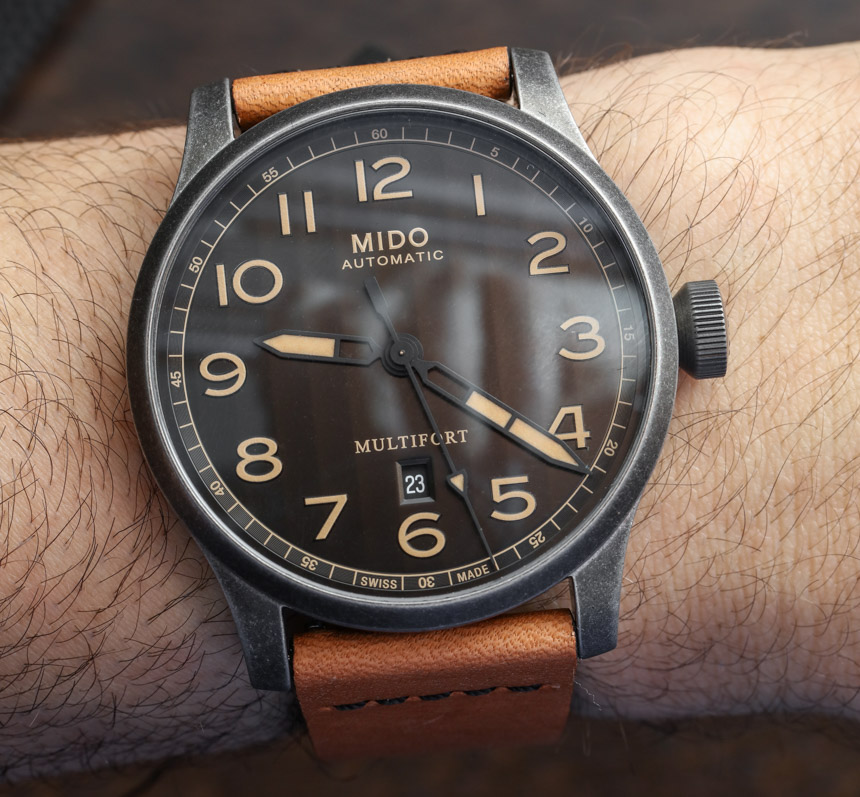 Mido calls this newer entrant into their Multifort watch collection the Mido Multifort Escape. Escape from what? I’m not sure. Perhaps Mido is trying to use this “artistically pre-aged” collection to suggest that its theme is an escape from the norm, or this is meant to be some manner of adventure or vacation watch… or better yet, we can simply ignore the name and focus on what is an increasingly positive trend for watches like this coming from the Swatch Group. 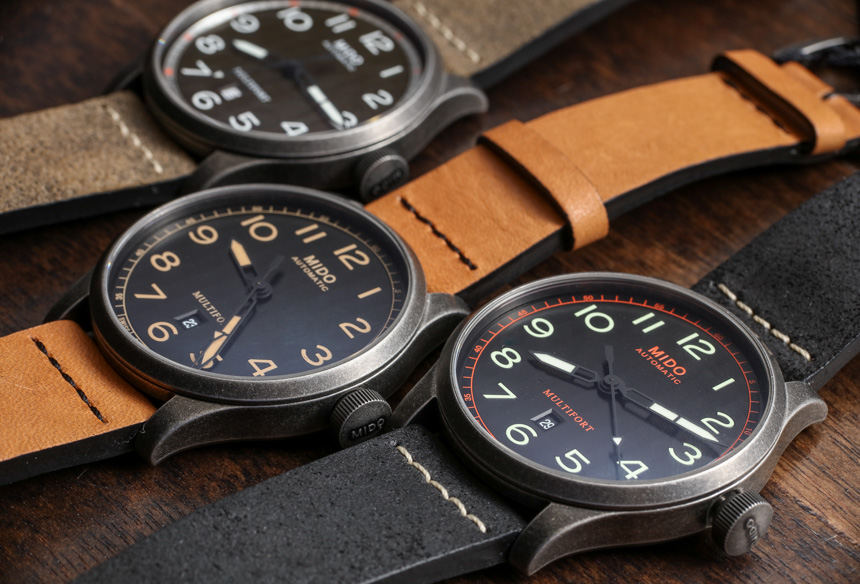 Perhaps no company is better suited to reeling in watch retail prices than the Swatch Group. With so much vertical integration at their disposal, and given the fact that they make their own movements (ETA), Swatch Group brands like Mido are doing the right thing when it comes to both pricing and design. Between brands like Mido, Hamilton, Certina, Rado, Tissot, and Longines, the Swatch Group has been able to make relatively exciting mechanical men’s watches for under $1,000. It once used to be that the sub $1,000 price was the “street price” (a discount from retail), but as brands work to narrow retail and street price discrepancies, we are seeing a lot more realistic (for our market) retail pricing. 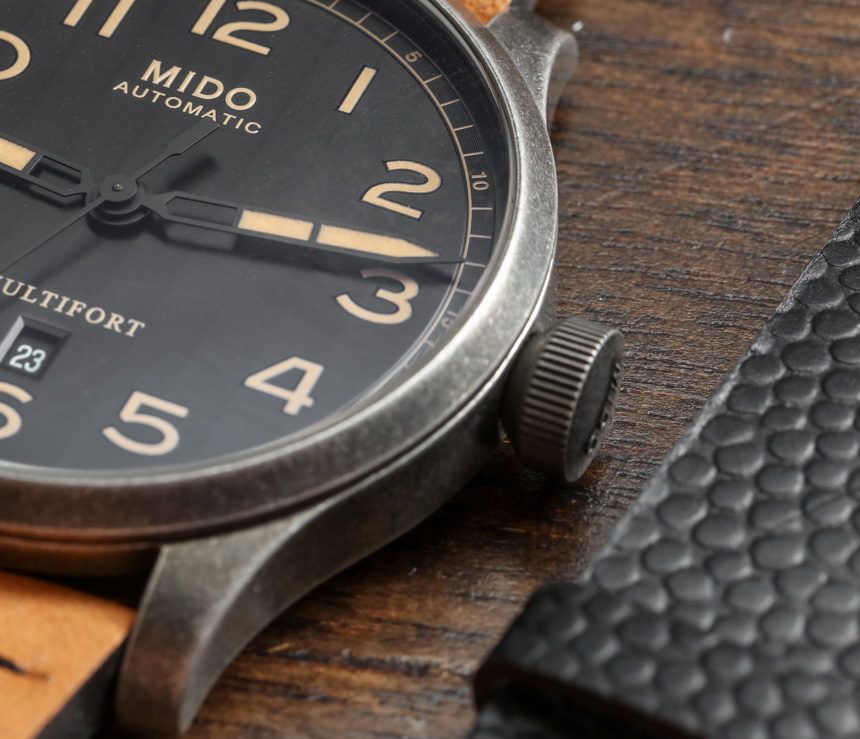 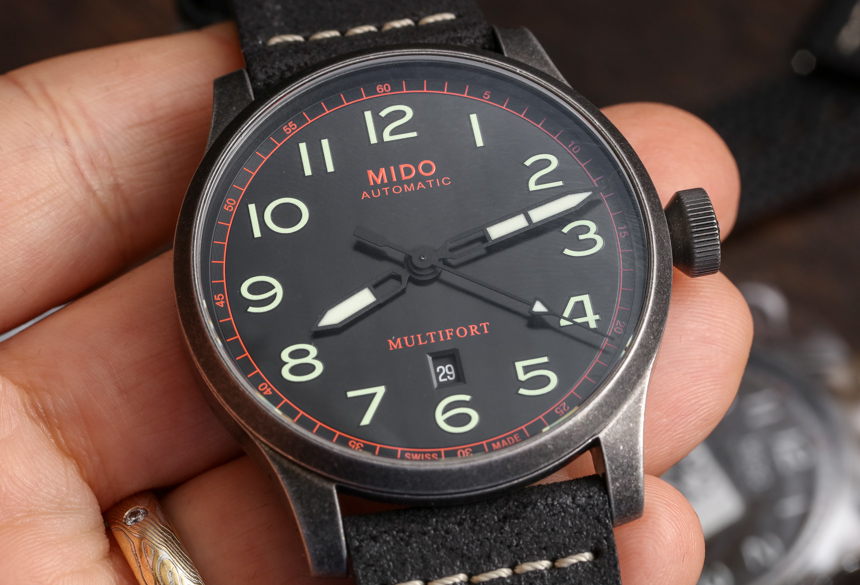 With an automatic Swiss movement, competent dial design and detailing, and a PVD-coated steel case meant to look a bit “nostalgic” and weather-beaten, the Mido Multifort Escape isn’t just priced decently, but it is also properly targeted toward a younger audience. I’m not ready to say that the brand as a whole has turned itself around, but there are an increasing number of promising things coming from Mido. 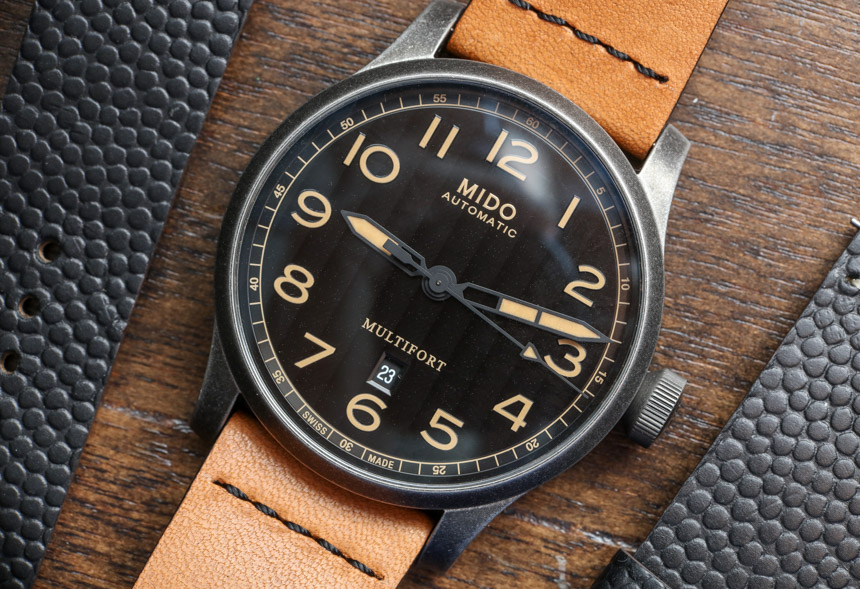 We see a lot of this from Swatch Group brands, where individual products here and there start to make a lot of sense in both design, technicality, and pricing. It is as though the right product team got their hands on it, and the brand uses something like the Multifort Escape as an experiment. What is still missing however, is any real attempt at creating a storytelling narrative around the watch. Mido (like many of its colleague brands), still banks on watch retail staff to tell these stories, which simply doesn’t happen very often these days. So, for now, you and I can guess together what sentiments and themes Mido is ultimately trying to suggest with the four current versions of the Multifort Escape watch. 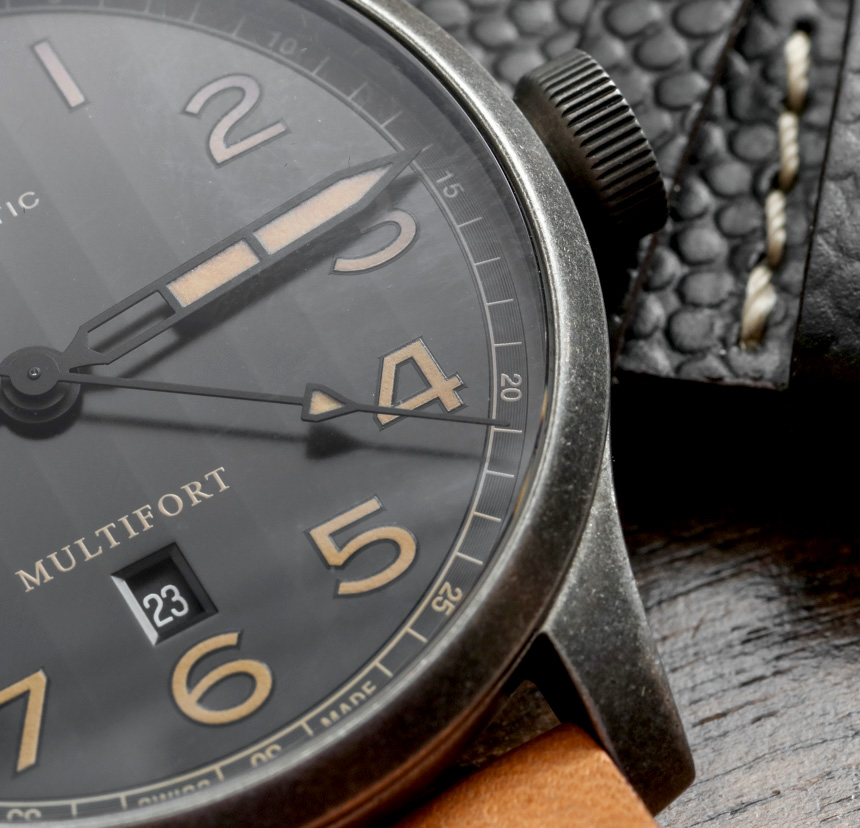 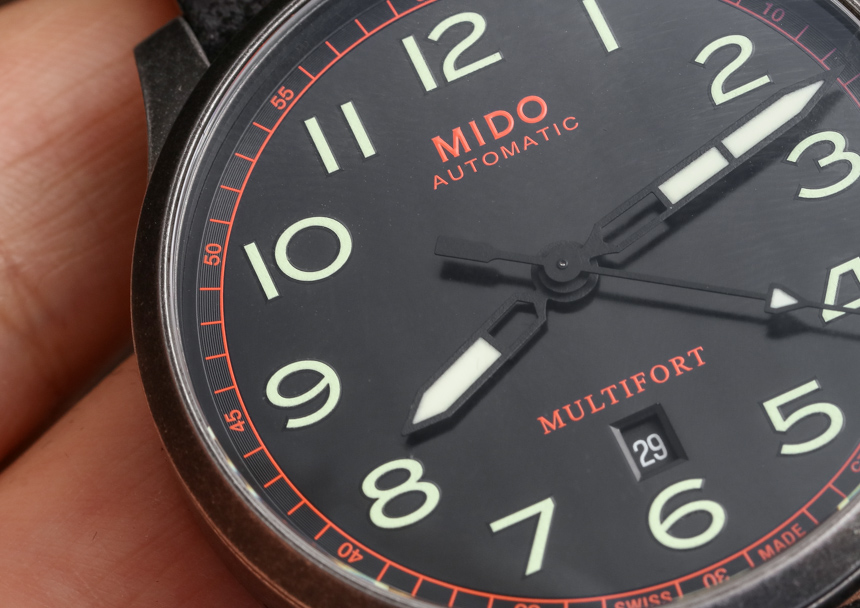 At 44mm wide, this is among the larger Multifort three-hand watches out there, but with its mostly vintage looks, the large case size is more fun and stylish than it is “too large.” The case finishing is similar to gun-metal, but a bit different. Mido was clearly going for an aged look, trying to play on the notion that certain classic watch designs also look cool when they’re presented in an “aged style.” Yes, this is pure fashion, but the watches do offer the appeal of a classic watch, with a very real emphasis on modern fashion considerations. 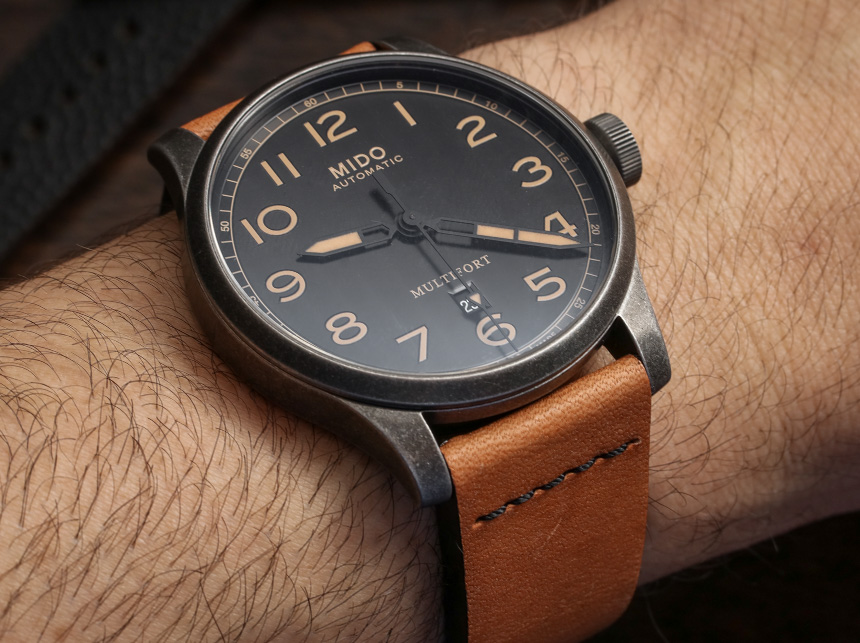 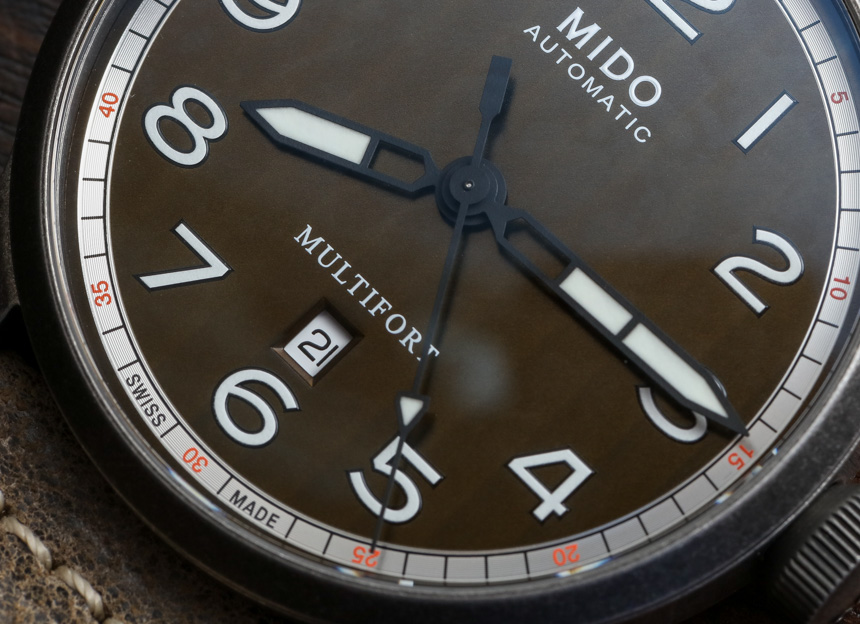 The 44mm wide case is 11.88mm thick and the lugs are 23mm wide. That means the straps are 23mm wide, which makes them a bit of an odd size as most strap widths are 22mm or 24mm wide. I am just saying this for the people who like swapping out straps on their watches regularly. The case is water resistant to 100m and is fitted with a domed sapphire crystal that has AR-coating on both sides. Yes, there is still some glare due to the dome of the crystal. 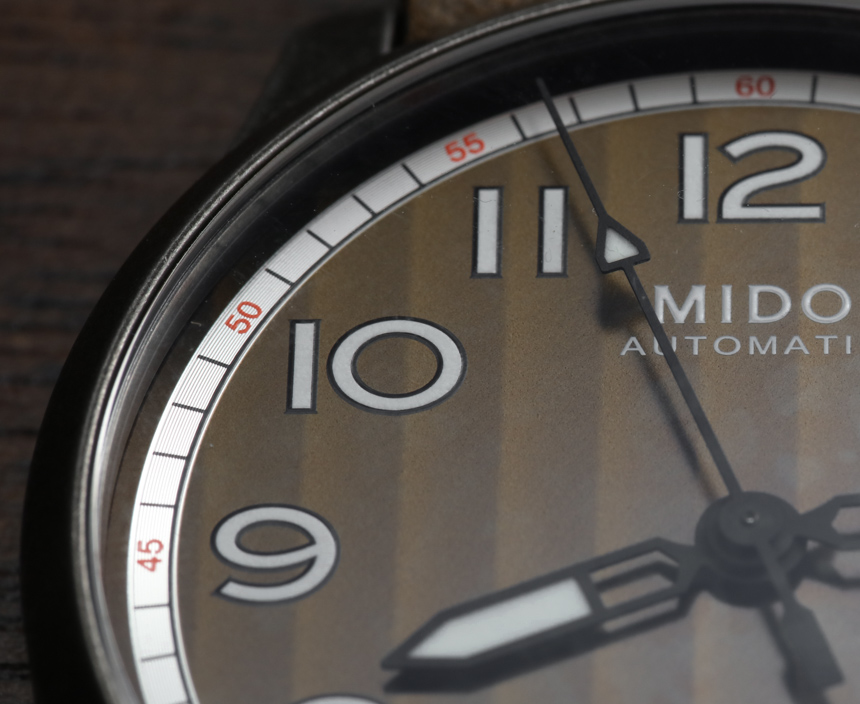 One of the appealing design elements shared in many of the Multifort watches is the Côtes de Genève-style (polished stripes) decoration on the dial in the form of the vertical stripes. Geneva stripes are a common form of decoration on mechanical movement surfaces. It is much less common to see this on watch dials. Mido decided a while back to use vertical Geneva-style stripes on the dial of Multifort watches, and I think it continues to work well. That mixed with the very easy to see lume-painted Arabic hour numerals and hands make the dial attractive and very legible. I also like how the hour hand is slightly different from the minute hand, so that legibility is further emphasized. 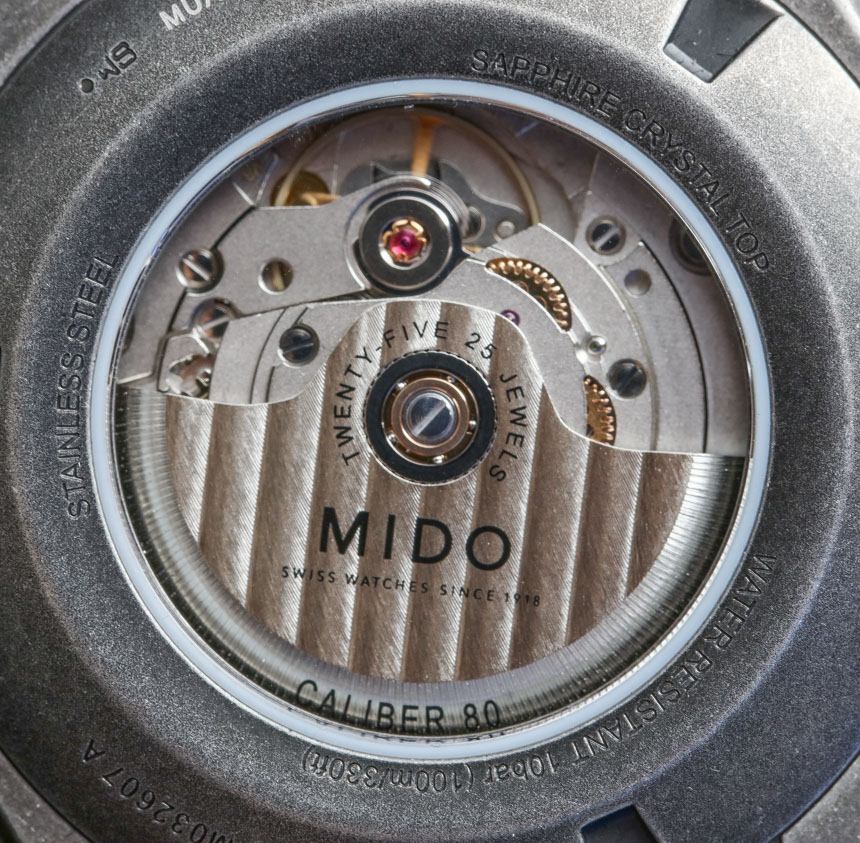 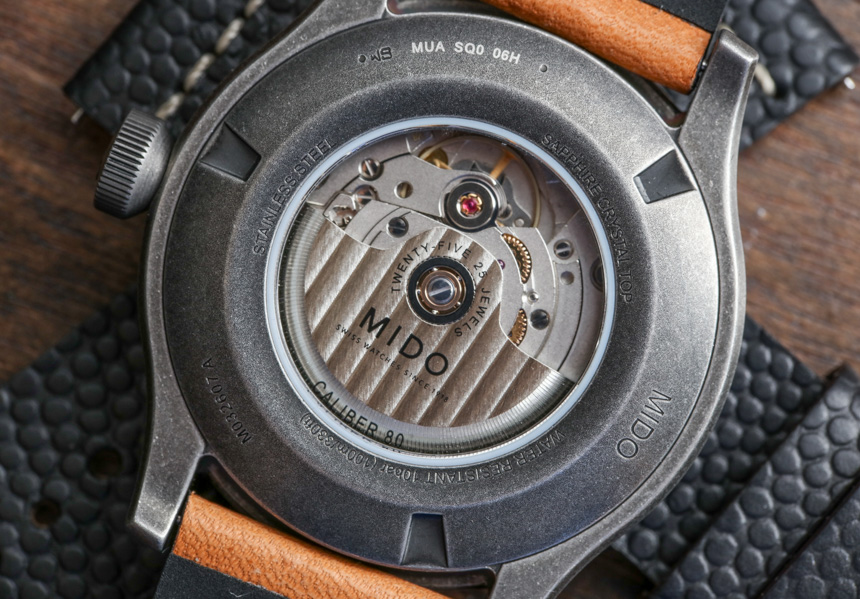 Inside the watch is the Swiss ETA caliber C07.611 4Hz automatic with about two days of power reserve. Many people still think of the 28XX series of movements, but the C series of ETA movements came out a few years ago despite limited use in watches. These newer era movements are larger, and thus intended to go in watches for today’s size tastes. One good thing about using the C07.611 movement is that when you see it through the sapphire crystal caseback window, it doesn’t look as much like a petite movement in an oversized case. 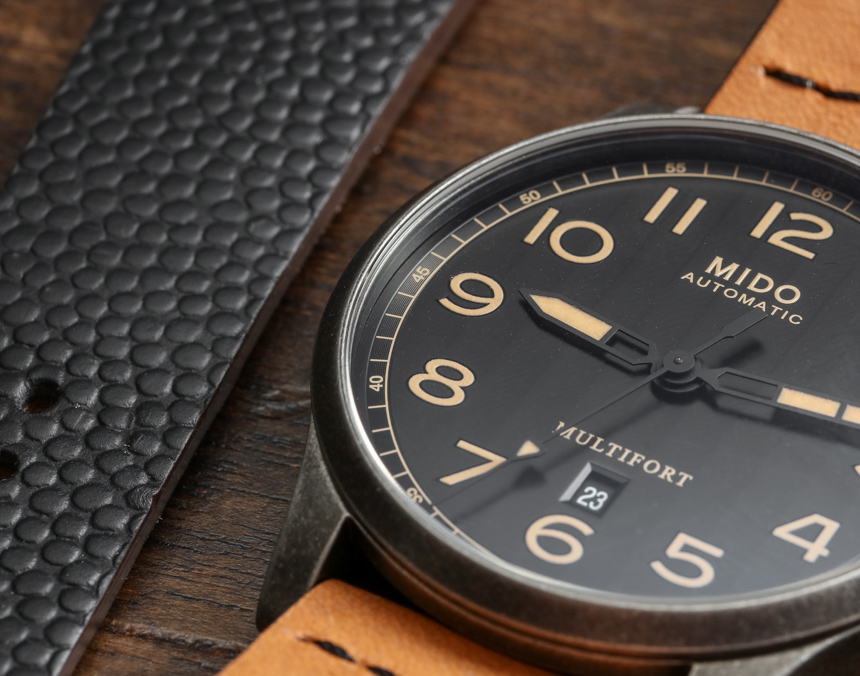 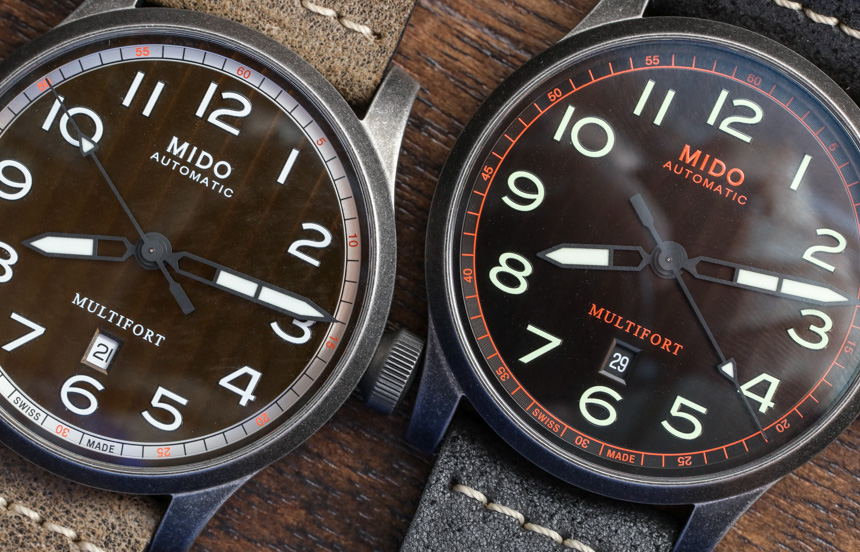