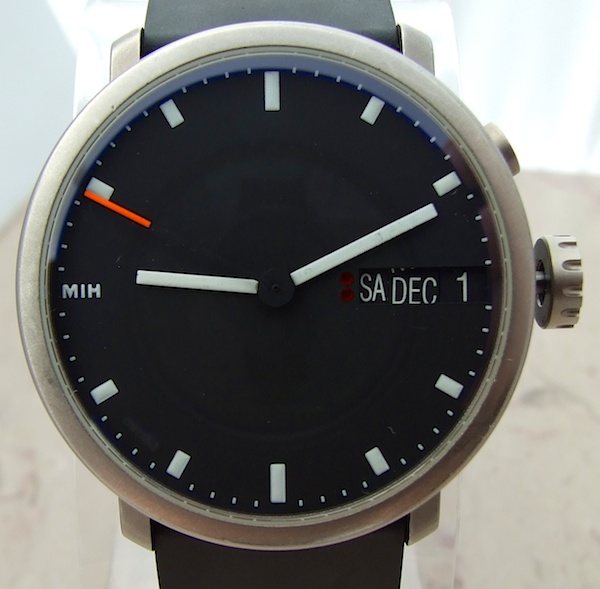 Welcome to another installment of “Stealth High Horology” [Ed. Note: Does such a show exist Paul? I want to be on it.]. In today’s episode, a high-end watch that’s so sparse in appearance that even watch thieves don’t recognize it! This is the MIH watch, and it’s got a great story to tell. Despite being introduced seven years ago, it’s unlikely you’ve heard of them, which we hope to remedy.

I’ve written before about ochs und junior, so if you recall those it’ll help to explain that the MIH watch came before ochs und junior. The MIH watch is actually a fundraising project for the Musée International d‘Horlogerie (MIH). To quote their site,

The MIH Watch personifies the mission of the museum, which is to convey to a broader public, the importance of horology, and of mechanical watchmaking in particular. The MIH watch is not being produced by a watch brand on behalf of the museum, nor does it already exist under some other name. It has been designed from the ground up and incorporates a mechanism that you will not find in any other watch.

The backstory here is that Ludwig Oechslin, of Ulysse Nardin repute, was appointed curator of the museum and worked with Beat Weinmann and Christian Gafner. A high-end watch was the logical way to raise funds, and thus the MIH timepiece seen here was introduced in September of 2005. Having said that, it was the unique desire of Mr. Oechslin to not produce a timepiece that was more expensive that it needed to be. So even though they could have charged much more, they decided to keep the price (relatively speaking) low.

So what is it? It’s an annual calendar with a 30-minute chronograph and AM/PM indication, automatic, based on an exclusive nine-piece design by Ludwig. An annual calendar complication requires correction only one day per year, that being March 1st. Unlike most every other annual calendar that exists, this one has three concentric disks so that the date reads out in single unobtrusive line. Annual calendars are usually complicated beasts with multiple subdials and hands (for example, the RGM 160 I reviewed) so the MIH is almost shockingly minimalistic and easy to read.

Where, you ask, is the 30-minute chronograph? Well, the second hand is the second register, and flip the watch over to see… 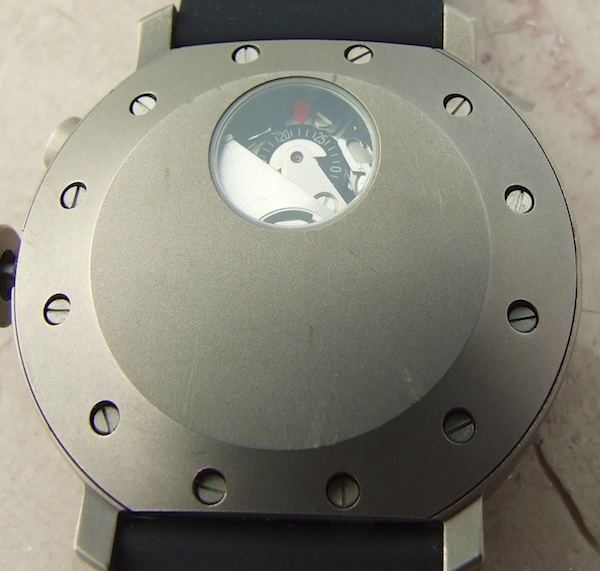 That’s a small, 8mm, sapphire window over a 30-minute (jumping) register. So it’s a secret chronograph, in that you have to take the watch off to measure longer than a minute. Zoom in a bit: 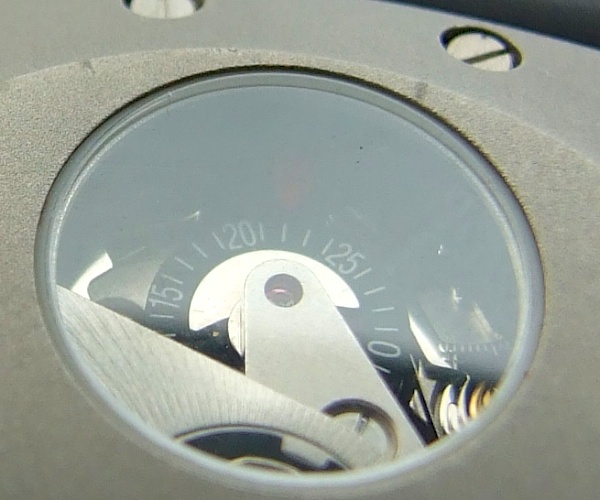 Sorry, it’s quite difficult to photograph. Needless to say, this is a unique way to implement a chronograph! All part of the creativity character you’ll find in most all of Ludwig’s creations.

The movement is made by Paul Gerber in his atelier, where they are assembled and activated. The Swiss ETA 7750 automatic base movement is a good choice, as it is incredibly durable, chronometer-accurate, easily serviced, and provides enough torque for an annual calendars’ wheels. The mechanism is delightfully quirky to wear, in several ways. Like all 7750s, the unidirectional winding rotor means that it’ll vibrate on your wrist just a bit when freewheeling in the off direction, which you can also just hear. Secondly, the use of this gear: 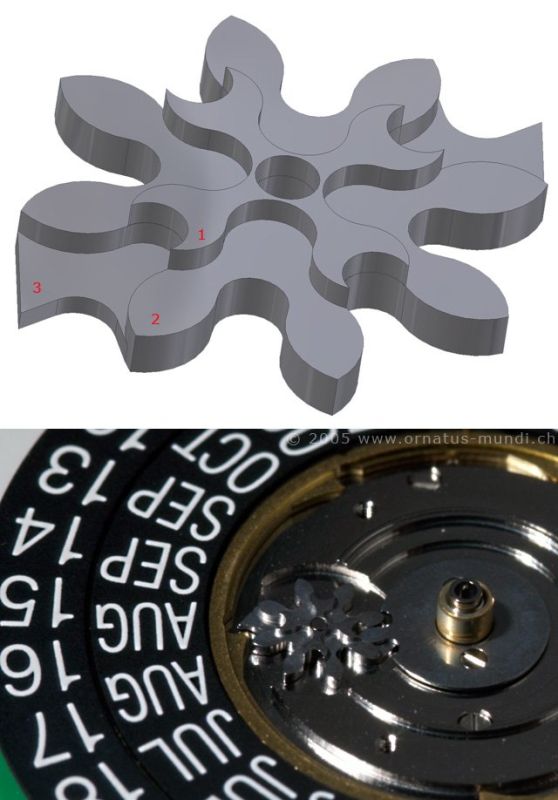 which is the heart of the annual calendar, has the uncommon benefit of allowing the weekday to be set backwards, but means that the month/day/date wheels are not always in perfect linear alignment in the window. I find it to be endearingly imperfect, but that’s just me and I’m demonstrably enamored of the watch. Thirdly, the two red dots in center of the dial are an interesting consequence of the gearing – the day wheel is driven by the hour wheel, which goes round twice per day, so each day has to be printed twice. This means that the day changes at both midnight and noon, which takes you by surprise sometimes, but Ludwig made it a feature by marking the second instance with two red dots, and the first with one. Voila, an AM/PM indicator.

The last quirk is the most versatile: since the second hand is part of the chronograph, you can synchronize seconds effortlessly in less than a second, and I’ve also found that sometimes I leave the second hand stopped and enjoy the relative stillness of the dial without it in motion. The chronograph has a monpusher for all the functions, further adding to its minimalism. What you have is a concept found no where else, a 30 minute chronograph when you want it, and a seemingly normal seconds hand when you don’t.

As with the ochs und junior watches, Ludwig has a particular gift for minimal design. Just nine parts to add the calendar complication was a record at the time, and partially to commemorate that the MIH logo on the dial is set at nine o’clock. Speaking of that, let’s look at the rest of the watch. It’s a titanium case with a domed sapphire crystal, screw-down crown and non-screwed monopusher for the chronograph. It weighs 90g with the included rubber strap and titanium buckle, and measures 42.2mm by 14.7mm (top of the crystal, 11.7mm at the edge of the case). The strap is inset just a bit into the case, yielding a compact 44.5mm lug to lug. Despite the chronograph button, it’s water resistant to 100m. 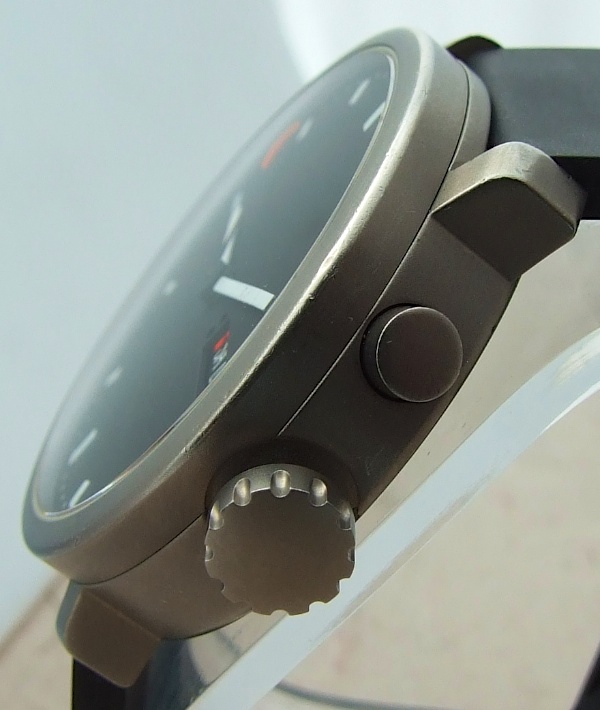 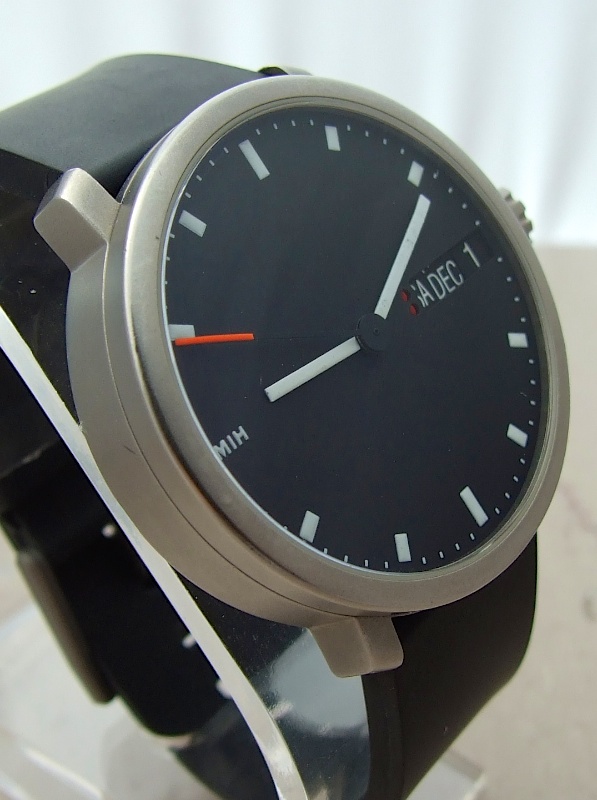 Other than the MIH at nine, the dial is devoid of any branding or maker’s mark. The only clue is a really, really obscure etching on the inside of the buckle: 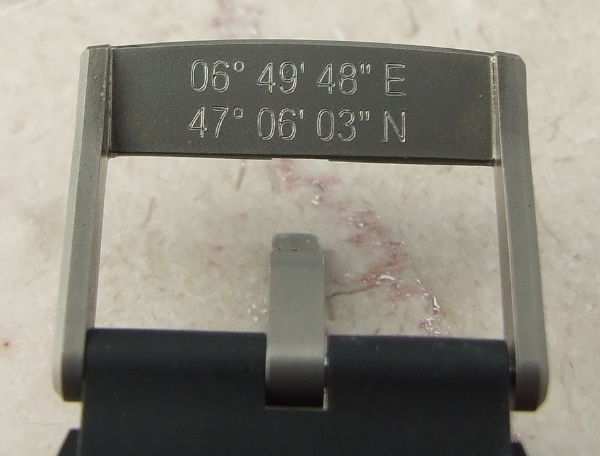 Talk about stealth… those are the latitude and longitude coordinates of the museum. It is effective as well:

I remember a client from Holland who collects tourbillons. One night burglars entered his house and stole everything, jewelry, wallet and the mobile phone. But they left the MIH watch on the table!

That quote really captures the low-key “stealth wealth” essence of this design. Especially with its plain rubber strap, there is just zero hint that this is an expensive Swiss watch. On the minus side, if you want to impress people, this is the wrong choice unless they’re already deep into watches and timekeeping.

According to Beat, the watch sells well to non-traditional buyers –

Art collectors, designers, architects, medical doctors, IT – developers – people they like functional minimalism. Surprisingly like at ochs und junior there are a lot of people they buy the MIH watch without being watch freaks. They find something different than the watch industry in general offers and love as well the fact that there is no marketing around and that there is just a little bit of a logo…

On the wrist, it is a delight. Light as a feather, and 37 of the 42mm diameter is dial. You can read this sucker from across the room. 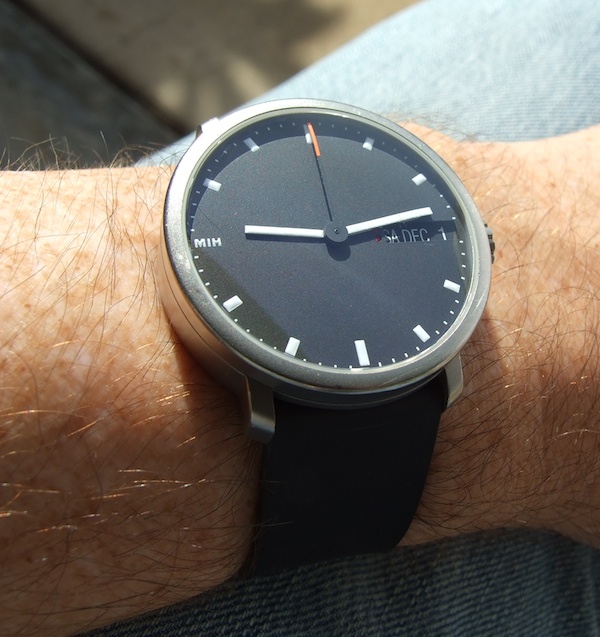 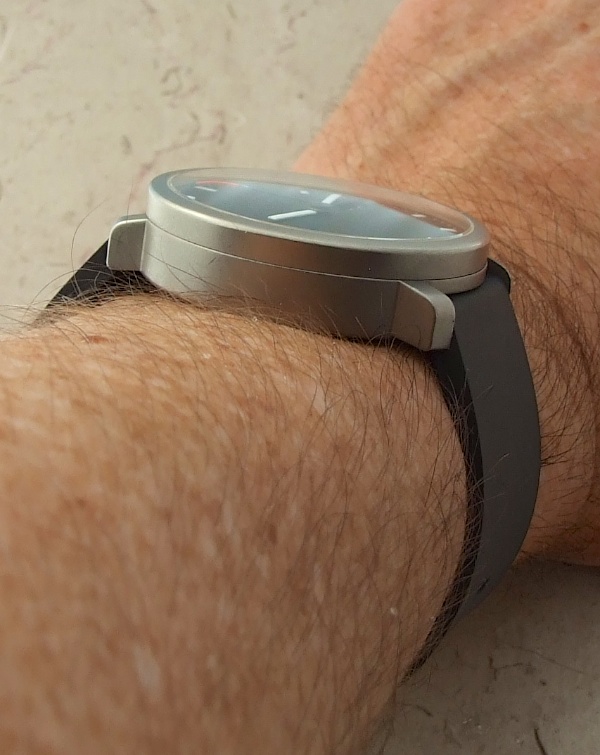 My one complaint would the case thickness – a bit more than I’d prefer, unavoidable due to the 6.8mm height of the base movement. There’s no such thing as a thin 775x movement watch. Notice, however, the lug design: the strap is tucked in a notch that connects around the midline. This keeps the lug-to-lug length down to 44.5, and the watch snugged into your wrist. Bravo. 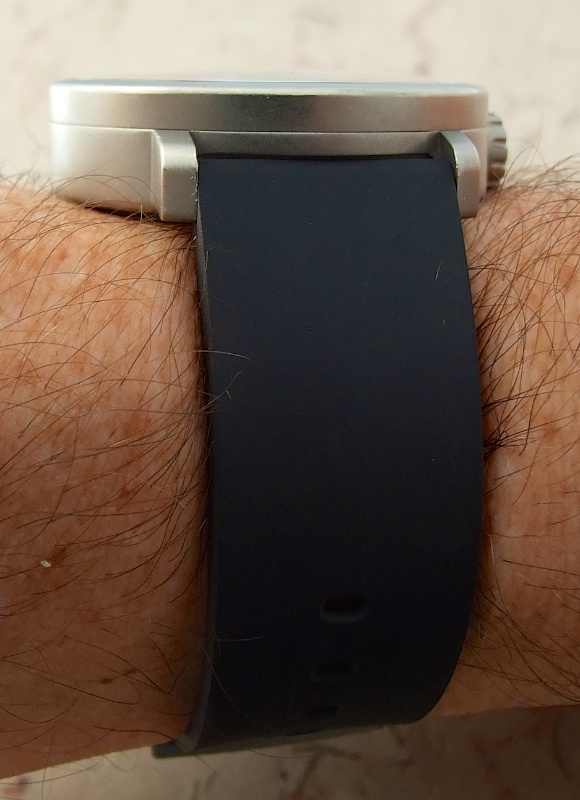 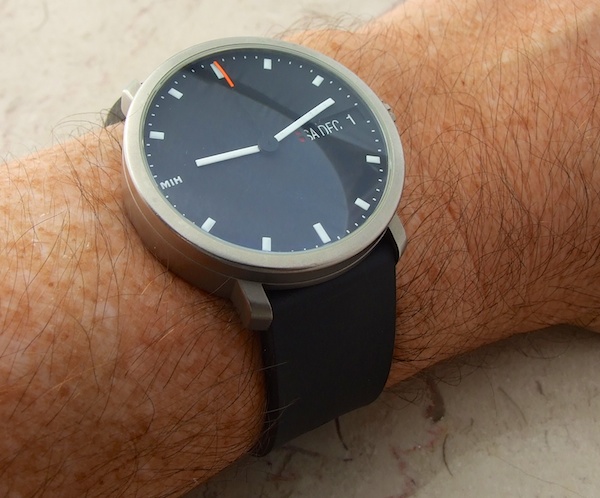 Lume is a single-coat Superluminova, which I’d rate as good: 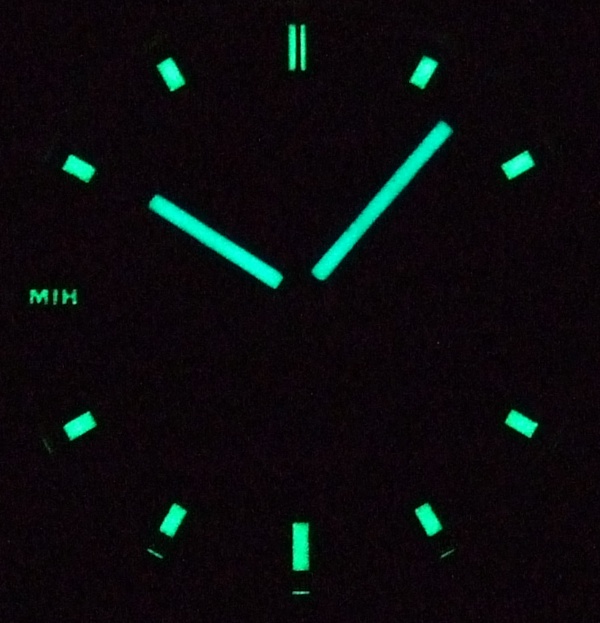 So now that I’ve tantalized you, let’s talk price and value: the MIH watch is a flat 6,000 CHF, which is about the same in dollars. That’s comparable to the RGM 160, for example, and quite a bit less than some of its competition, but it’s certainly not inexpensive. After a month of wearing it and pondering the question, I’ve decided that the price is reasonable, given the up-front nature of the fundraising (see the results here, or visit yourself in person) and the unique nature of the watch and mechanism. I like the Bauhaus minimalism of the dial and case, the versatility of the watch design, and I enjoy knowing that my plain-looking timepiece is actually 300-odd machined parts working in harmony. I also like the extreme durability – the 7750 is every bit as tough as Rolex or ETA, so you can even wear your MIH for sports or swimming. Most annual calendars are dress watches, not everyday wear watches, making this watch once again a unique exception to the rule. Want one? You can find them onsite at the MIH horology museum in La Chaux-de-Fonds Switzerland. [Ed. Note: An excellent place I may add. Well worth the visit for the entire family. You can also pick up a chocolate watch in addition to an MIH one.] You can also get one from retail partner Embassy which has locations in Lucerne (just down the street from ochs and junior) and St Moritz, and also ships worldwide.

Necessary Data:
Brand: MIH
Model: MIH
Price: 6,000 CHF
Would reviewer personally wear it: Yes indeed. I consider this a grail watch and will wear the heck out of it.
Friend we’d recommend it to first: If I knew him, Jony Ive of Apple. A perfect watch for a designer who appreciates fine machines.
Best characteristic of watch: That linear day / month / date readout.
Worst characteristic of watch: Thickness.

Thanks to MIH for the review item. Opinions are 100% Independent.
Advertising Message