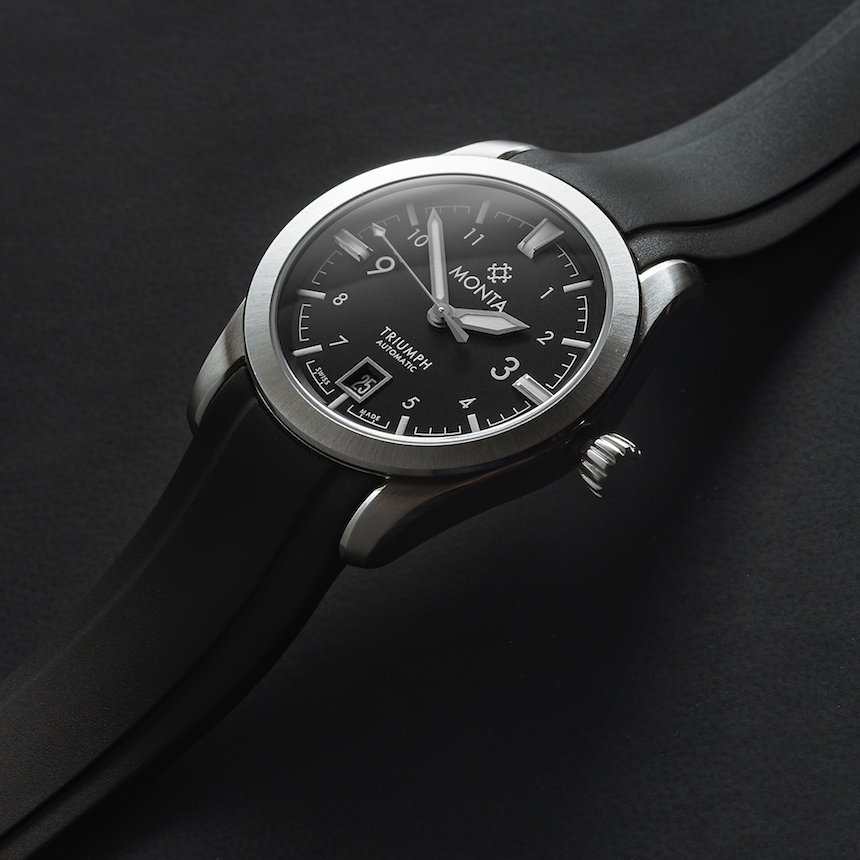 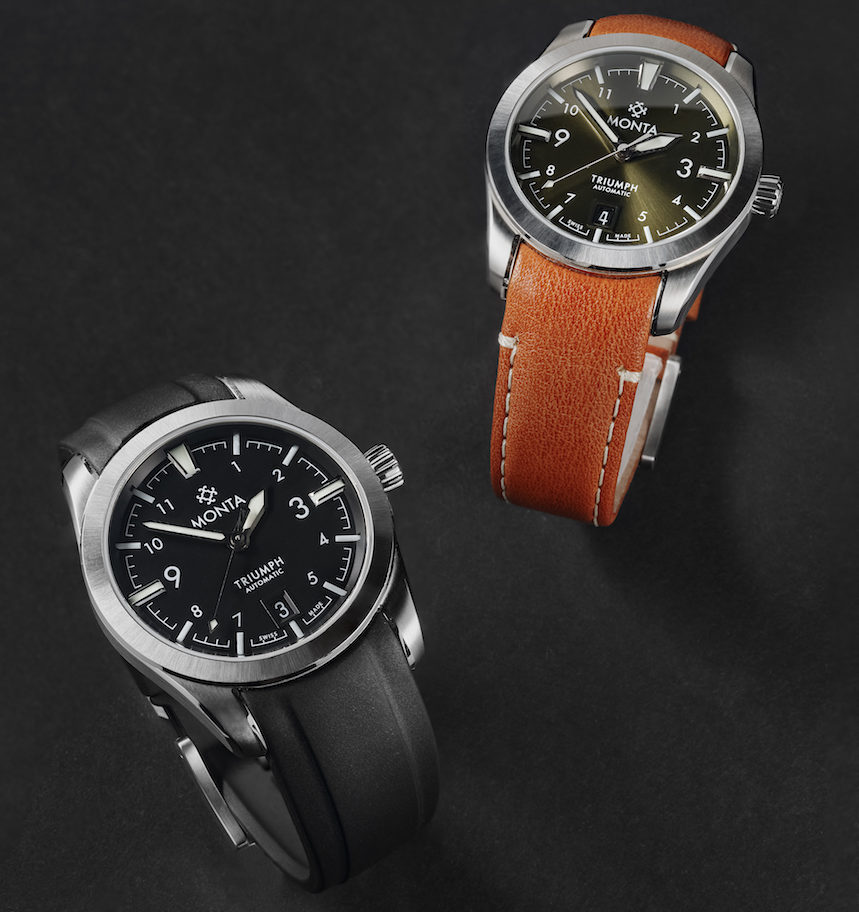 Monta, is the horological venture from the folks behind Everest Bands, the well-known producer of rubber and leather straps for Rolex watches. The brand debuted with the Monta Oceanking diver in late 2016 and followed that up with a preview of their next two watches, the Triumph Field and Skyquest GMT during Baselworld 2017. Of course, we all know that you get (or hope to at least) what you pay for, and the looming question among the watch crowd about Monta was whether their watches offered the value they were priced for. James’ review of the Oceanking talked about the diver and launch model, which was initially offered at $3,500. Now, the brand has lowered prices across the board for what was planned as well as the Oceanking, which is now priced at $2,350. I will go into a conversation with Monta about the cost and challenges of being a micro-brand which led to some big changes and I’ll also talk about the Monta Triumph Field watch and my experience over a week of wearing the prototype. 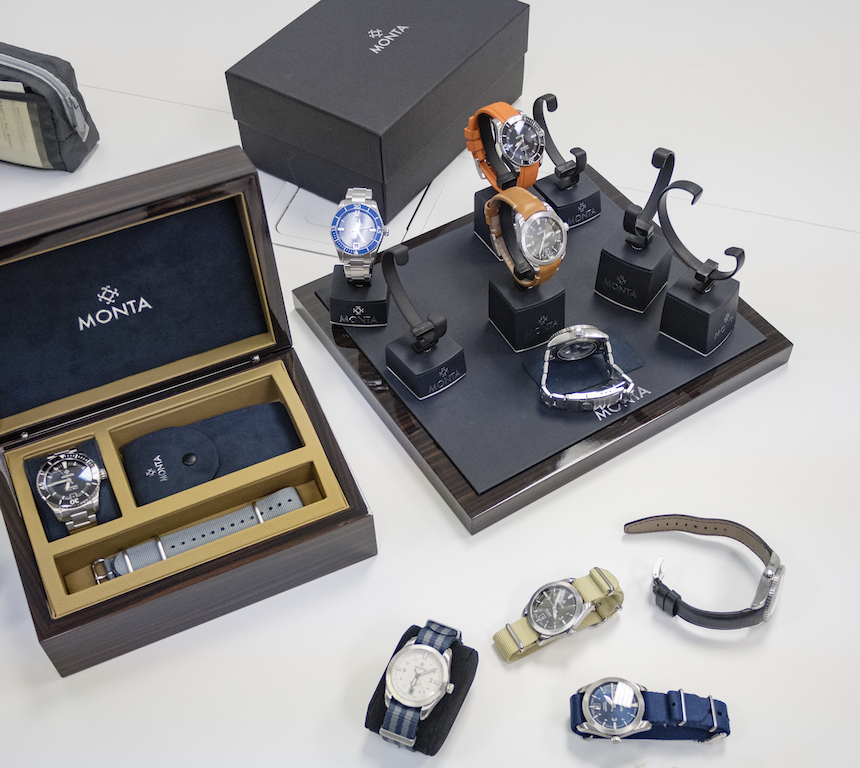 Monta’s production activities take place in Switzerland, but their headquarters is a small office tucked away in St. Louis, which is where I met Michael DiMartini, the founder and Justin Kraudel, a business partner. A fun point of interest in the office for me was this desk dedicated to ‘quality control and testing’ as Michael calls it, where he’s got just enough watch tools to be dangerous and he has been, if the multitude of broken components and disassembled watches were any sign. 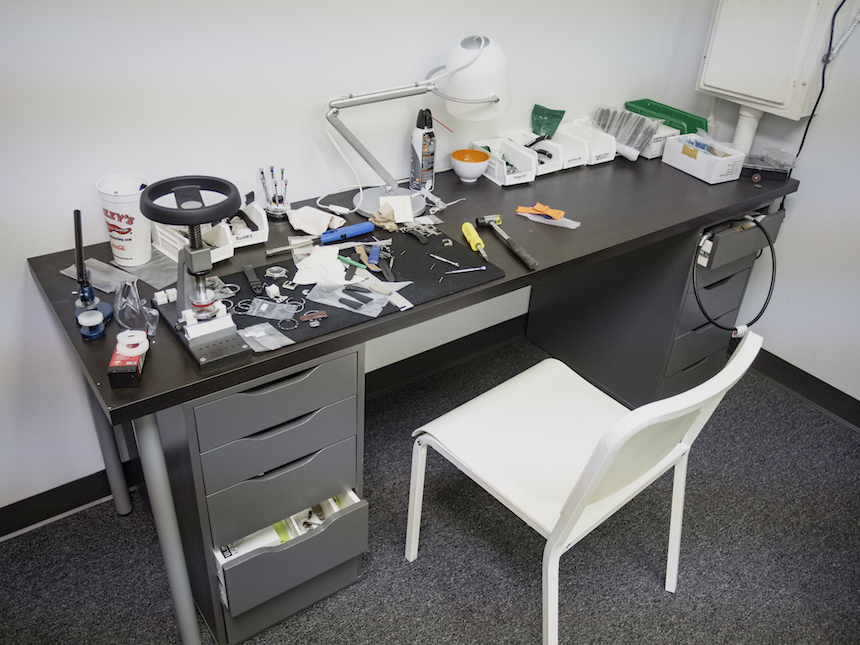 Before we jump into talking about design, production, and marketing, it might be useful to know that since Baselworld 2017, Monta has made some very significant changes in pricing. The Oceanking now retails for $2,350 on bracelet and $1,995 on rubber strap. This change has been in effect for a while, but the one that I find more significant and noteworthy is the new price of the Triumph Field watch, which like the Oceanking, has been reduced from what was stated at Baselworld. Read on to find out what motivated these changes and why the Triumph is now an interesting value proposition. 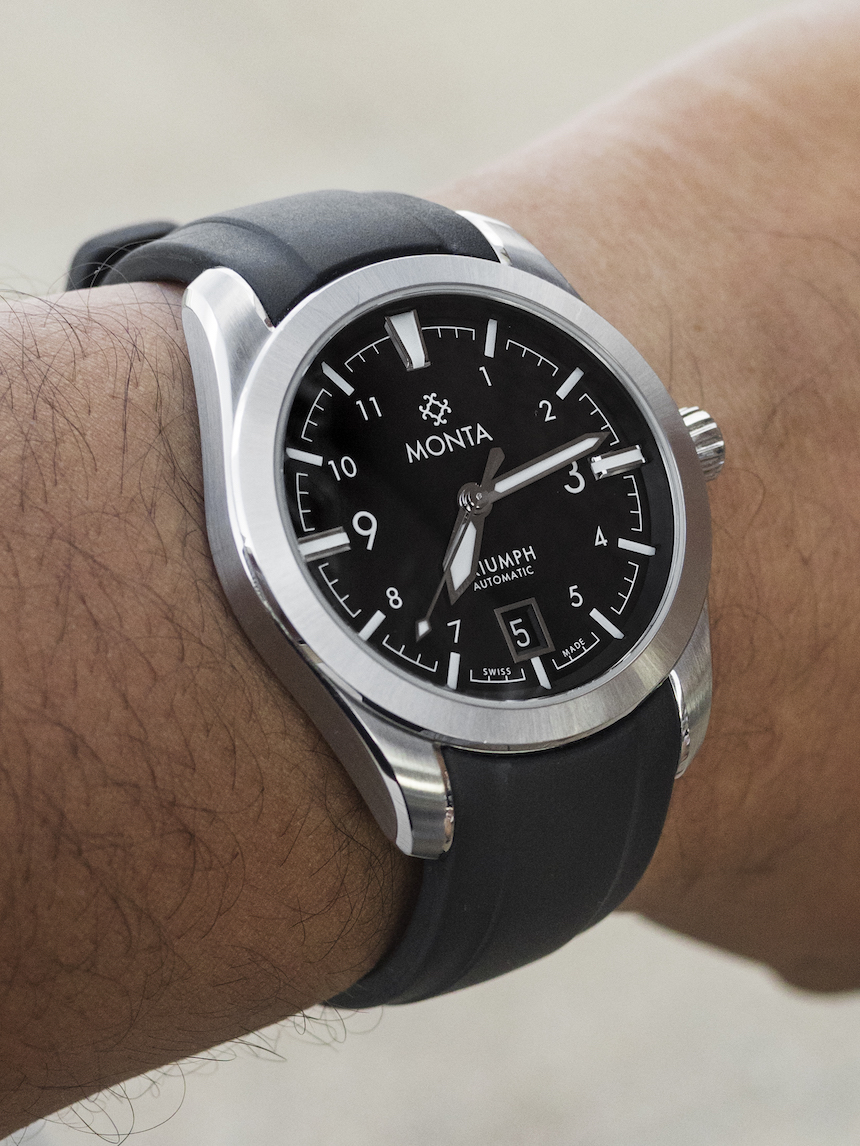 As a photographer, I like to think I have a more than average fascination with watch design. In an industry as old as this, truly unique design is extremely hard, and just because something is unique, doesn’t make it functional or pleasing to look at. Monta recognized this challenge early on and accepted that their design would be inspired by other pieces that have been around for a while. The Oceanking for example draws from the Rolex Sea-Dweller (not the Submariner as some might imagine) and Omega Planet Ocean and several other sources of inspiration, like the almost onion-shaped crown which to my knowledge has never been seen on a diver but is very ergonomic. In my opinion, the design influences for the Triumph Field are much harder to place. It is easy to place as a field watch, but unlike traditional field watches that tend to be sparsely finished and a tad unrefined, the Triumph has plenty of small details and touches that allow it to blend into urban and corporate settings much better. 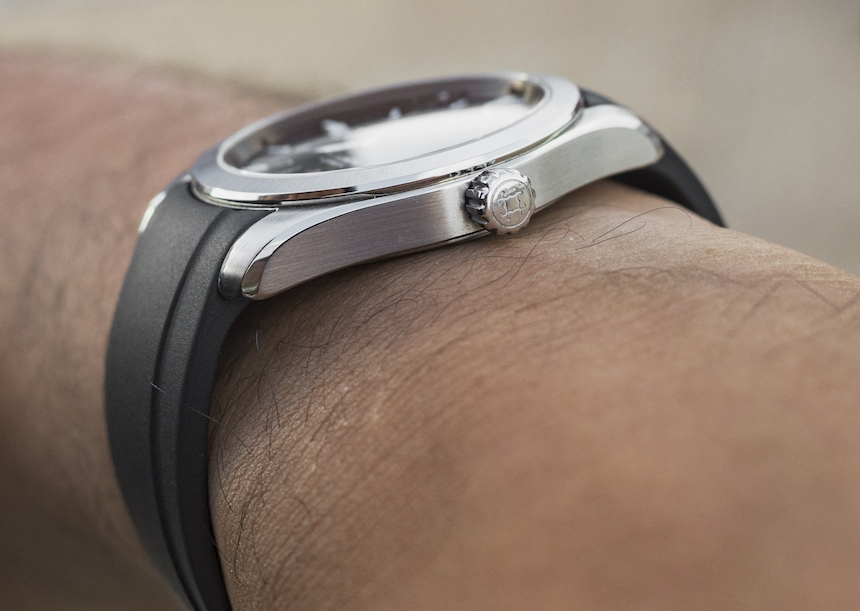 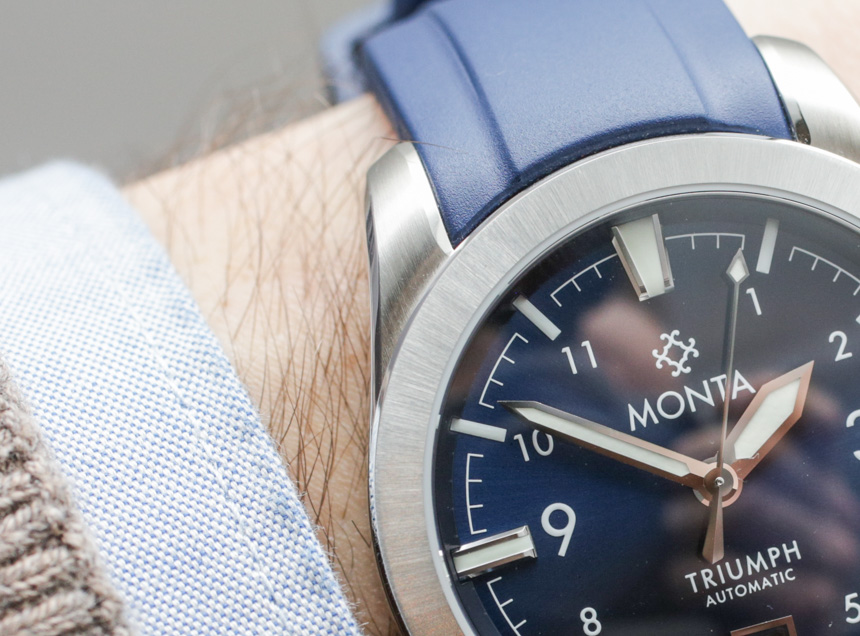 I mentioned earlier that the Triumph has various small details that make it stand apart and the case is a good example of this – the lugs are brushed straight, while the top of the bezel is brushed in a different inward facing pattern, the edges of the lugs are chamfered on the inside and outside and polished to a brilliant shine. On one hand, this decision for chamfered edges is smart as it is very hard to reproduce crisp, clean edges at this price point but on the other hand, polishing requires finesse and care as it is easy to take away too much metal while polishing, giving the chamfered edge a sloppy look. 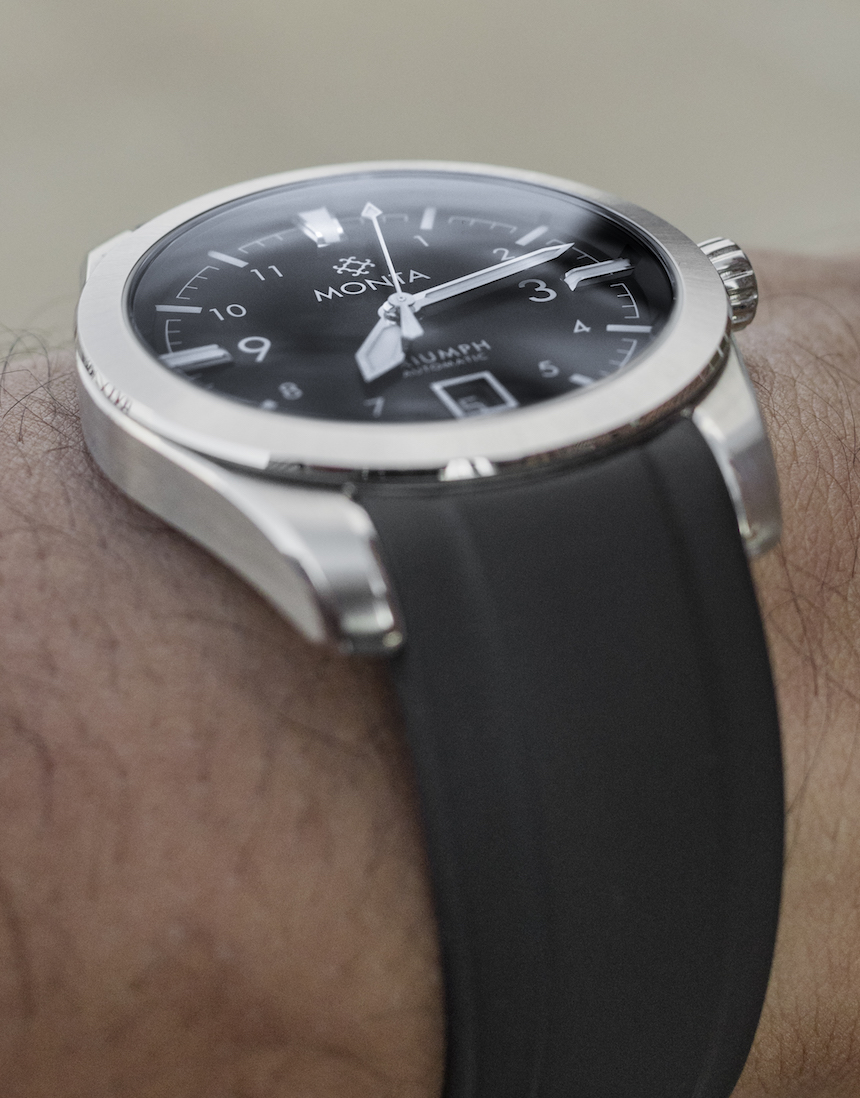 Another design feature I appreciated is the edge of the bezel. Generally, the bezel for a watch like this has a simple flat or sloping edge that flows into the top of the caseband, or in the case of double stepped cases, into the second step. The Triumph has a bezel edge that is polished into a ‘peak.’ The picture above does a better job at illustrating this but to achieve this look requires polishing and chamfering in two opposing directions to help achieve the ‘peak.’ While small details like this may not matter to everyone, I find it enjoyable as it makes a watch more interactive for me and encourages me to photograph it. More germane to this article however, is that this is a tangible sign of what Monta has decided to focus on – high quality of production materials and techniques. 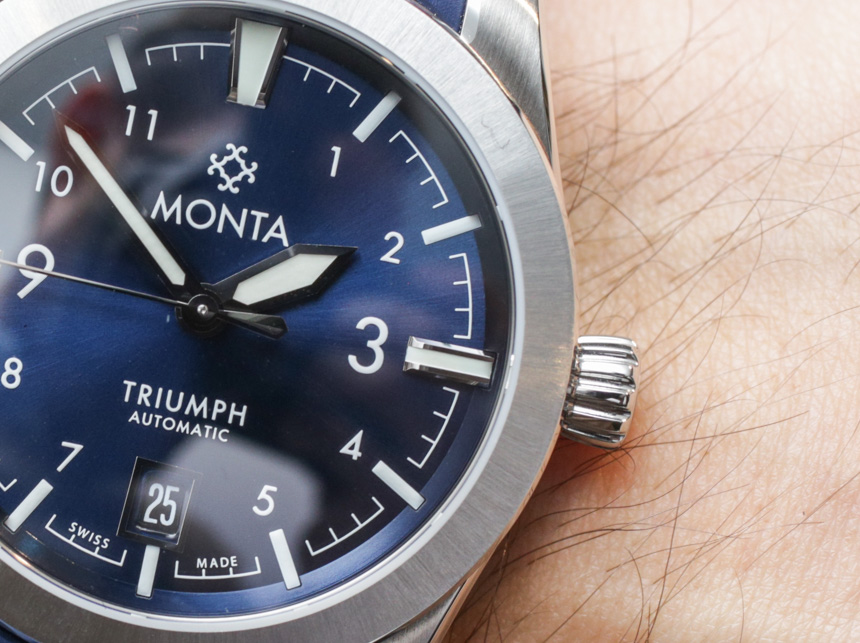 Naturally, this comes at a price. Michael tells me, and I’m not surprised to hear, that they initially had significant pushback from their manufacturing partners who felt that this was asking too much of them, especially at micro-brand volumes. After some time and effort, they’ve been able to find a case manufacturer who is willing to work with their demands for an appropriate premium in manufacturing costs of course. I think as consumers and collectors, we are usually not aware of how quickly costs can ramp up for seemingly small things. Another example that Mike brought up was with the watch hands, applied markers, and date window – all of which are polished rhodium. While steel would’ve been a cheaper option, Mike and his team decided that rhodium provided the right look for the watch and complemented the polished edges of the case quite well. I suspect I may be in the minority with this, but I am a fan of the “onion” crown, which I’m told will be a signature Monta design feature present on all watches down the road. Not only do I find the shape of the crown appealing, but it is also extremely ergonomic and makes unscrewing the crown and winding the movement easy and pleasurable. 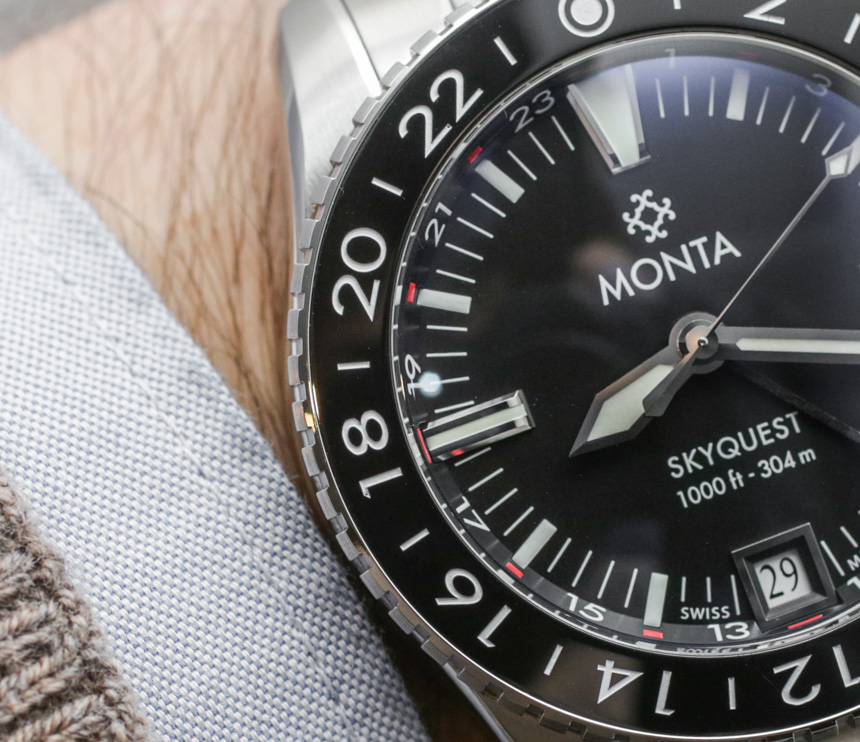 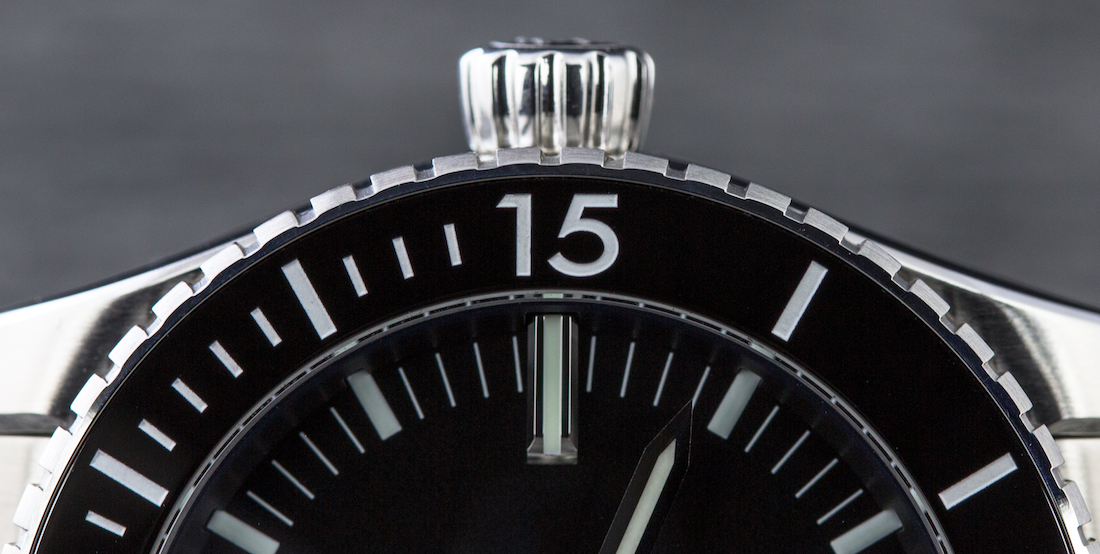 Speaking of design and production, Monta already has patents in place for their bezel rotating system (used in the Oceanking and the future Skyquest GMT, not the Triumph) and currently has a buckle design in R&D. To say that it is unusual for such a young brand to invest in research & development and patents is a bit of an understatement as it requires the brand to undertake substantial investment. As far as the bezel rotating system goes, I’d say it is an investment that has paid off. Comparing it to the bezel on my personal Seiko SRPB09 Samurai and a Tudor Black Bay, I must admit that the bezel on the Monta had less play and was more precise. It’s hard to believe and had I not used the watch myself, I would be skeptical too. 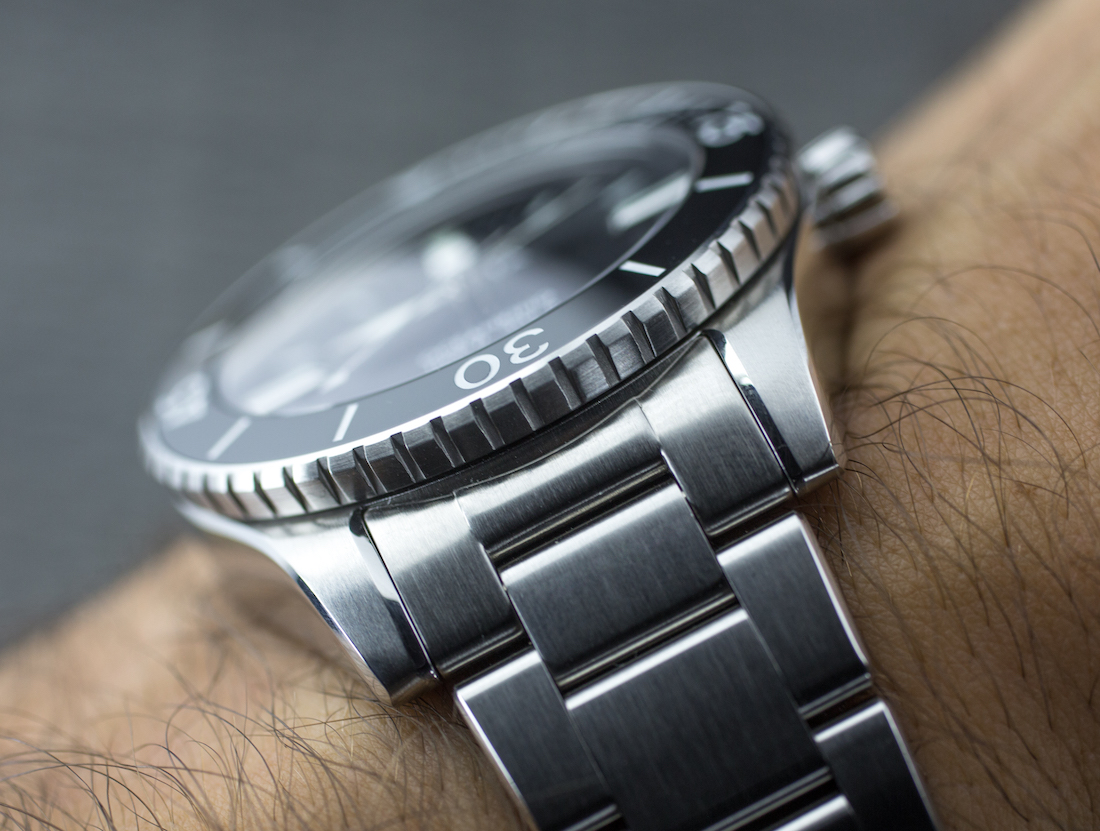 The ceramic bezel on the Oceanking sits on four proprietary pins that help it rotate smoothly while ensuring the pip lines up perfectly with minute markers, but has sufficient friction to prevent accidentally moving the bezel. However, this design only allows for a 60 or 72 click bezel and not the 120 click that a lot of divers are equipped with. The 72 click variant sounds odd, but is useful for their third watch, the Skyquest GMT as 72 is divisible by 24 and this makes the bezel more accurate than a 60-click for reading a third time zone. Also worth noting is that Monta designs with future-proofing in mind. For example, the Triumph case is designed with the ability to have a rotating bezel with their proprietary system even though it was not necessary right now. While this decision may have marginally increased production and tooling costs now, it can potentially save Monta much more in tooling on future watches.