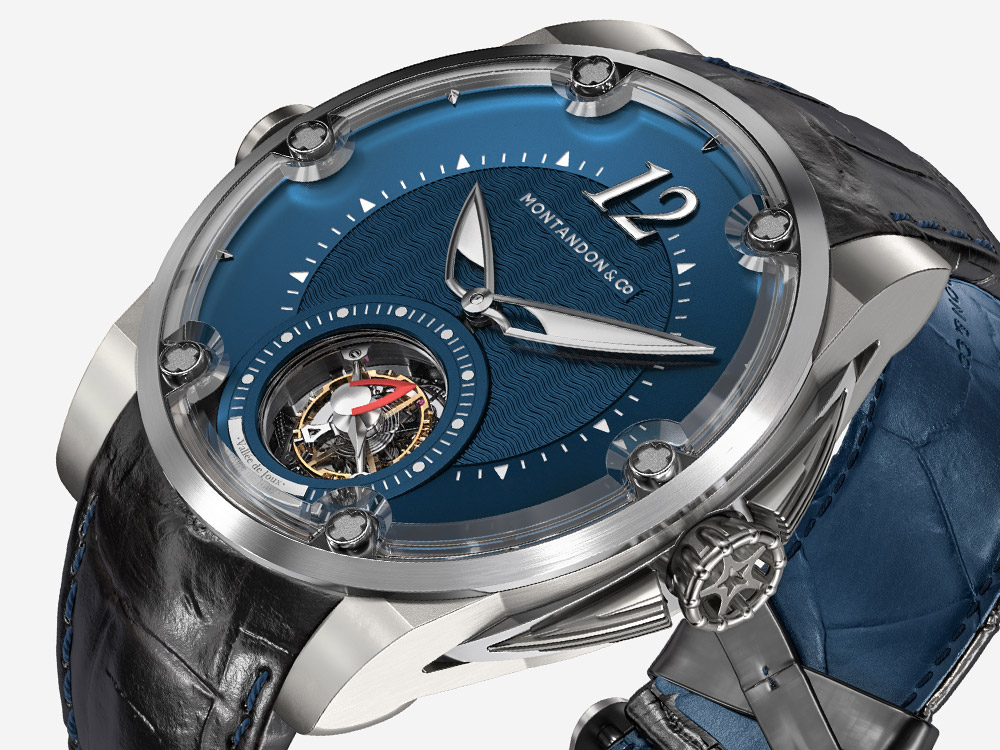 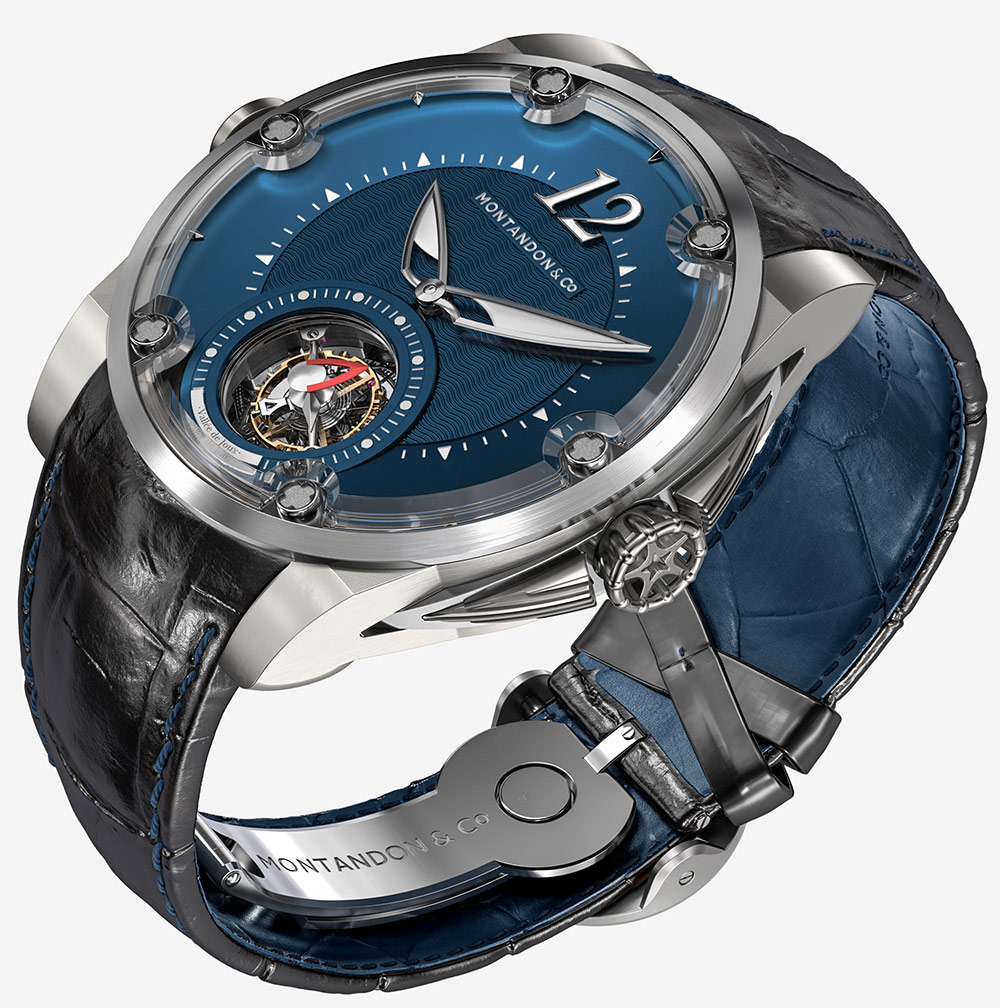 Debuted in 2017, Montandon is a new Swiss watch brand “inspired by super yachts.” That should at least tell you something about its target clientele and hints a little at what to expect from its watches. The Montandon Windward TMA01 V1 is the brand’s first model, and well into six digits in price with an appropriately bold design and an in-house tourbillon movement, it exists firmly in the world of niche, high-end independent watchmaking. 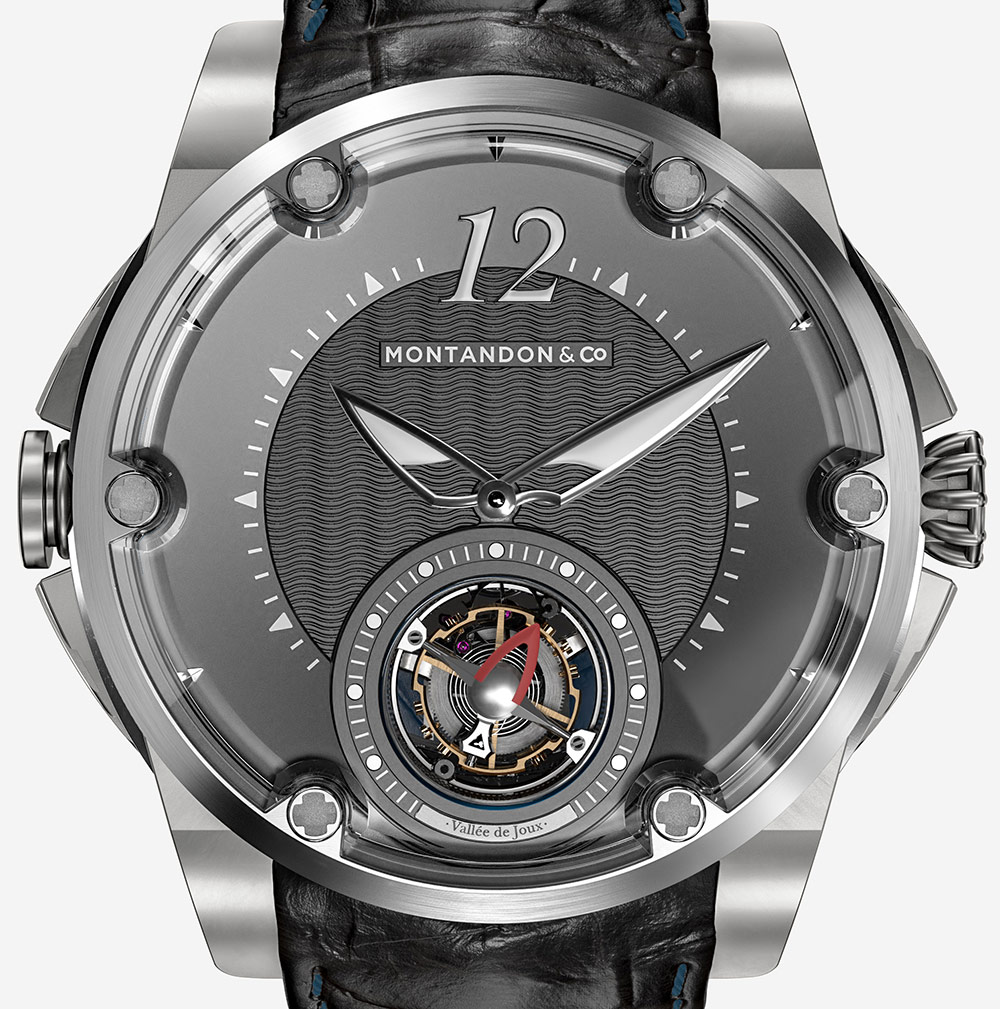 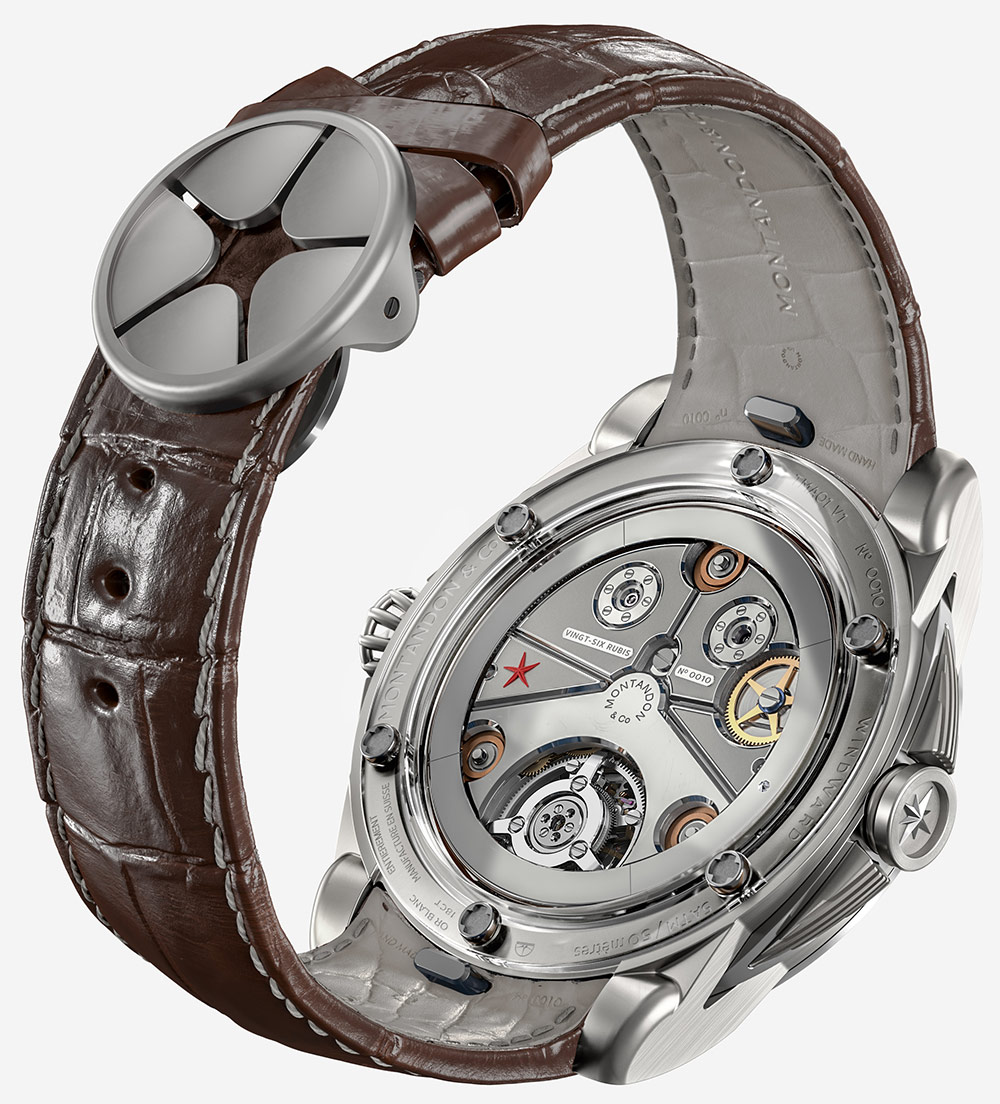 First, a little background. The brand’s founder, Daniel M. Montandon, spent 25 years on the distribution side of the Swiss watch industry, but he began his career in naval engineering, hence the boat theme. As with many independent brands founded by industry veterans, often combining a love of watches with some ostensibly complementary interest, Montandon seems like its founder’s passion project. To me, that is a good reason to make a watch. In this case, it is all about sailing, and that finds expression in branding and design cues, which we’ll come back to shortly. 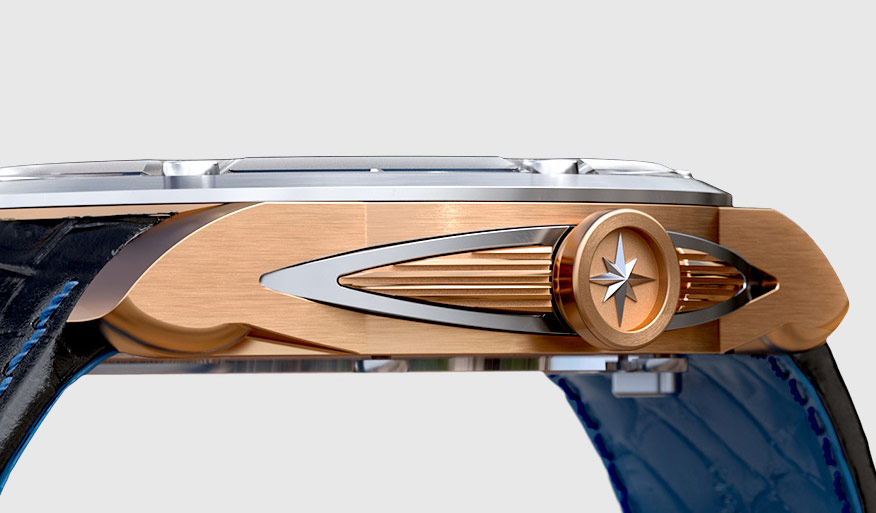 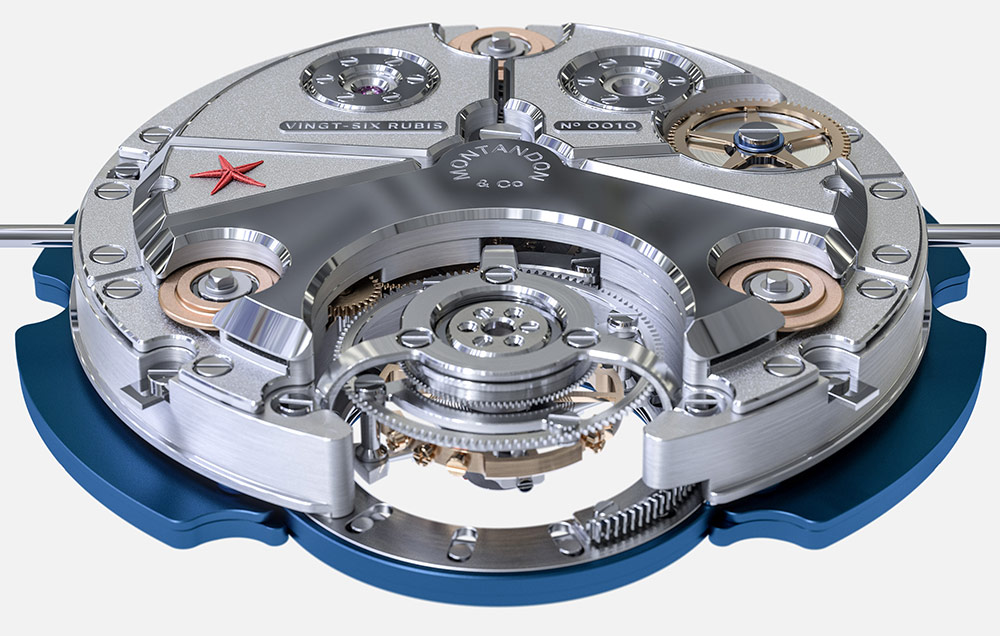 The other name to note at Montandon is that of designer David Candaux. Mr. Candaux is a fourth-generation watchmaker whose career includes complicated projects such as the MB&F HM6 Space Pirate (hands-on here) and the Fonderie 47 Inversion Principle Tourbillon, and he currently runs his own workshop and eponymous brand. Headquartered in Geneva, Montandon watch cases and movements are “entirely designed, developed, and made in-house.” Rather than “Swiss Made” or the like, Montandon dials display “Vallée de Joux” – where Candaux’s Ferme Horlogère Contemporaine studio is. 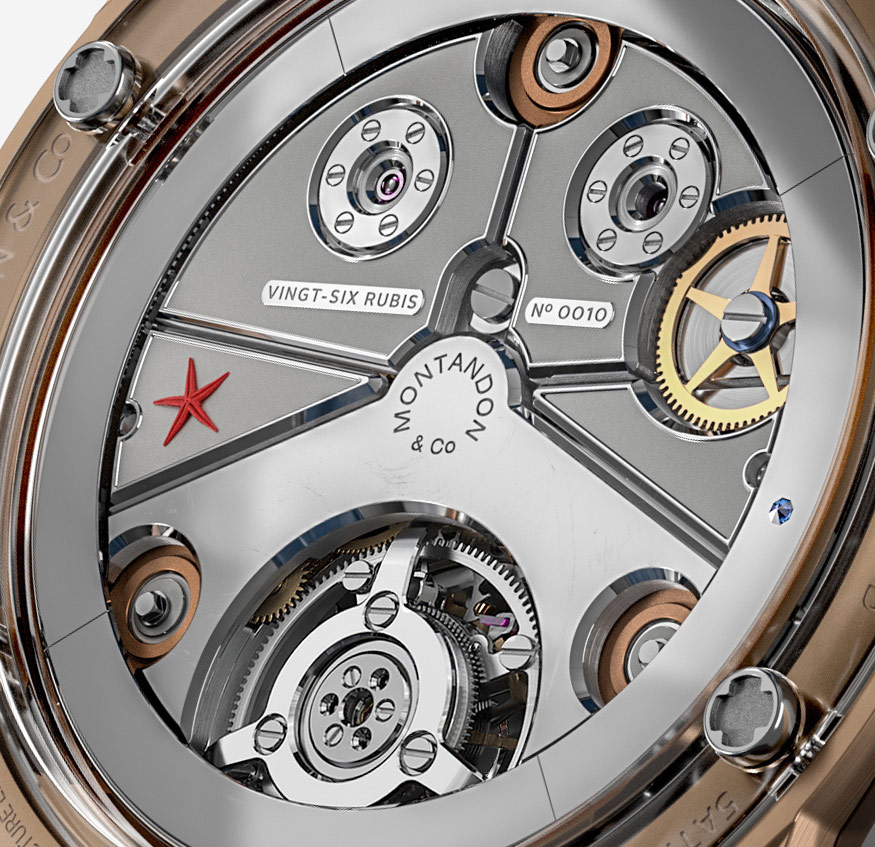 Mr. Montandon says that, when conceiving the Montandon Windward TMA01 V1 watch, “I began by imagining the day-to-day lives of our clients.” I’ll trust that he understands the lives and needs of the super yacht-riding super-rich better than I do, and how a tourbillon watch is a “worthy tool” for them. A “worthy toy,” I can better wrap my head around, and that, it surely is. 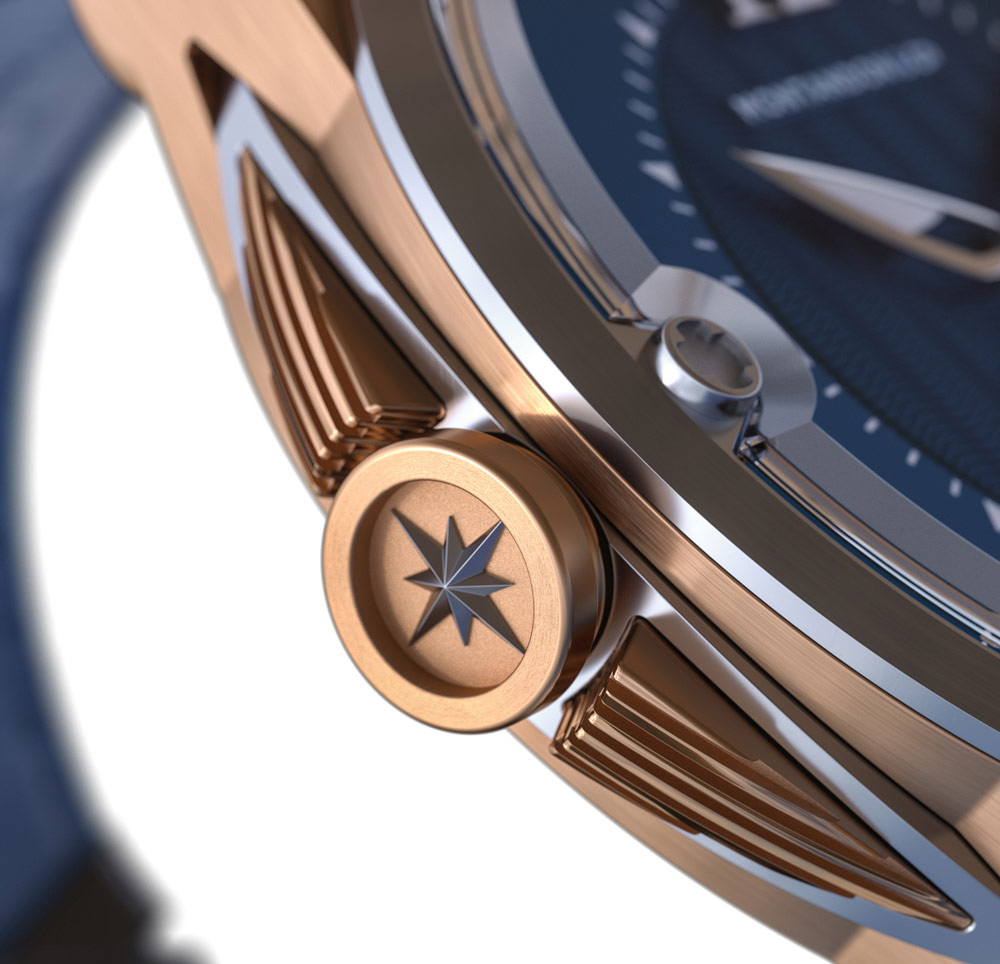 The bronze or 18k white gold case (titanium bezel for both) is 44mm wide, 11mm thick, and consists of about (there’s some slight inconsistency in the brand’s materials) 36 components – so it’s a complicated and architected-looking case that should wear pretty boldly. The bronze alloy that Montandon uses promises “total electrochemical stability” – so, hopefully, that means no corrosion or patina, as the Montandon just doesn’t seem like the kind of bronze watch you want patinated. One might be skeptical of nautical pretenses and the Montandon Windward TMA01 V1’s water-resistance of only 50m, but that’s better than a lot of delicate tourbillon watches manage – and we can presume that it is not destined for a life that will extensively test its durability. A total of six versions are available between the two case materials and three dial color options of blue, white (“snow”), or gray (“slate”). 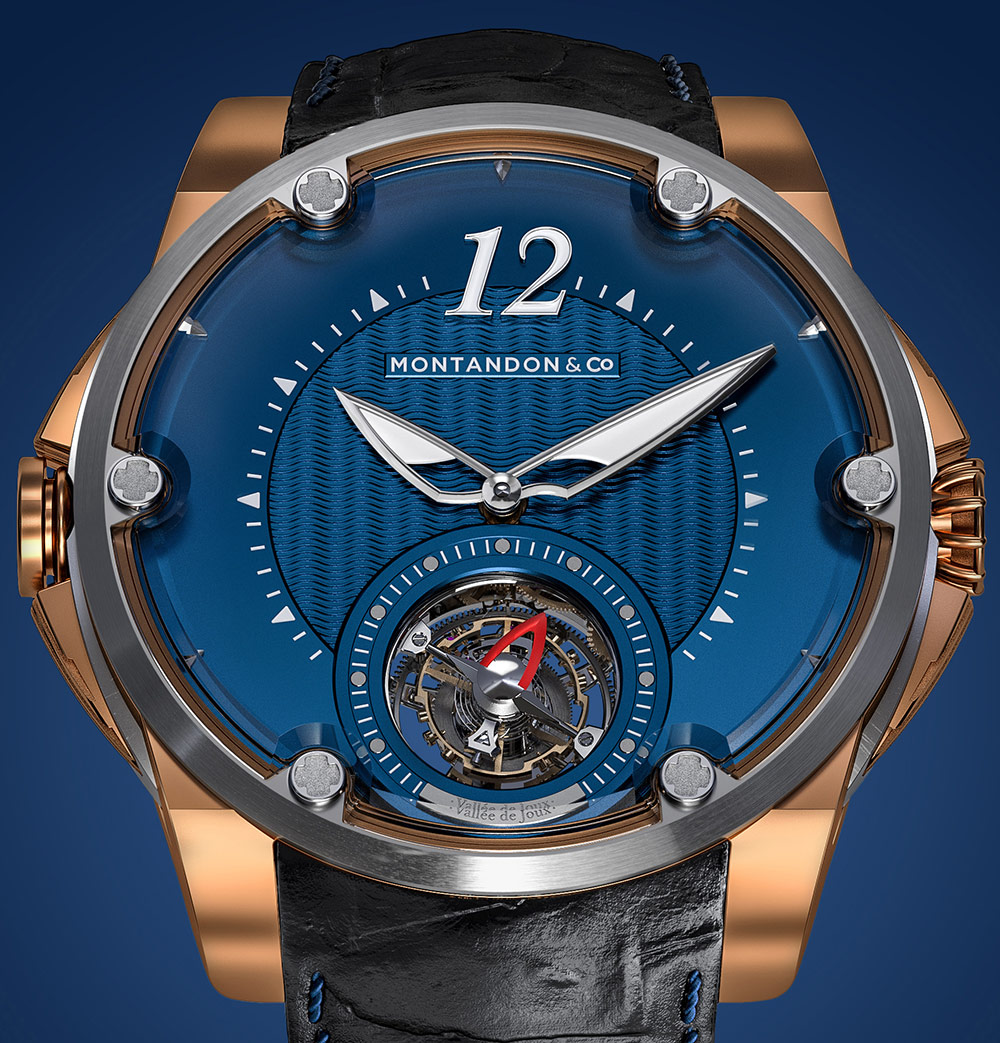 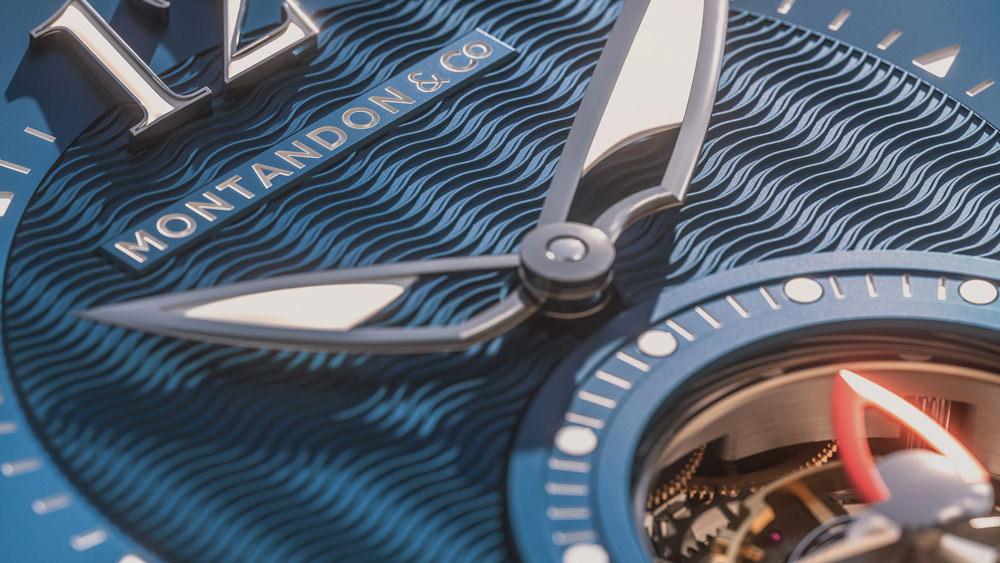 Those are some basic specs, but there are more details and nautical-themed design treats to discover. Overall legibility appears pretty good with hands (lume-filled white gold) that contrast nicely against their background. The sail-shaped hands against the wavy guilloche dial, to me, is a nice way to suggest a sailboat on the ocean, particularly for the blue dial version. It seems almost all aspects of the watch are referencing boats in some way – surely, with some I don’t recognize but that yachting enthusiasts will. Note also the complex shape of the raised sapphire crystal that incorporates cutouts for the bezel’s six screws. The 60-second tourbillon at 6 o’clock doubles as a seconds indicator with a red wedge for a seconds hand. 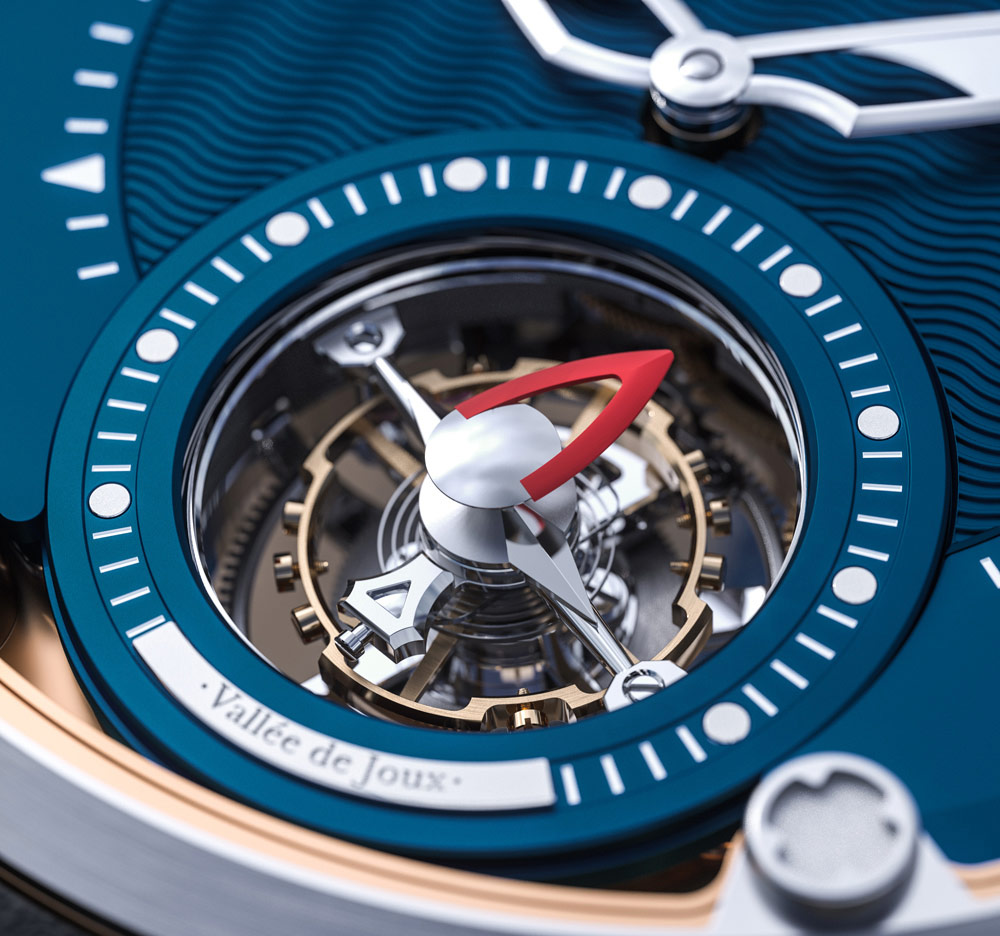 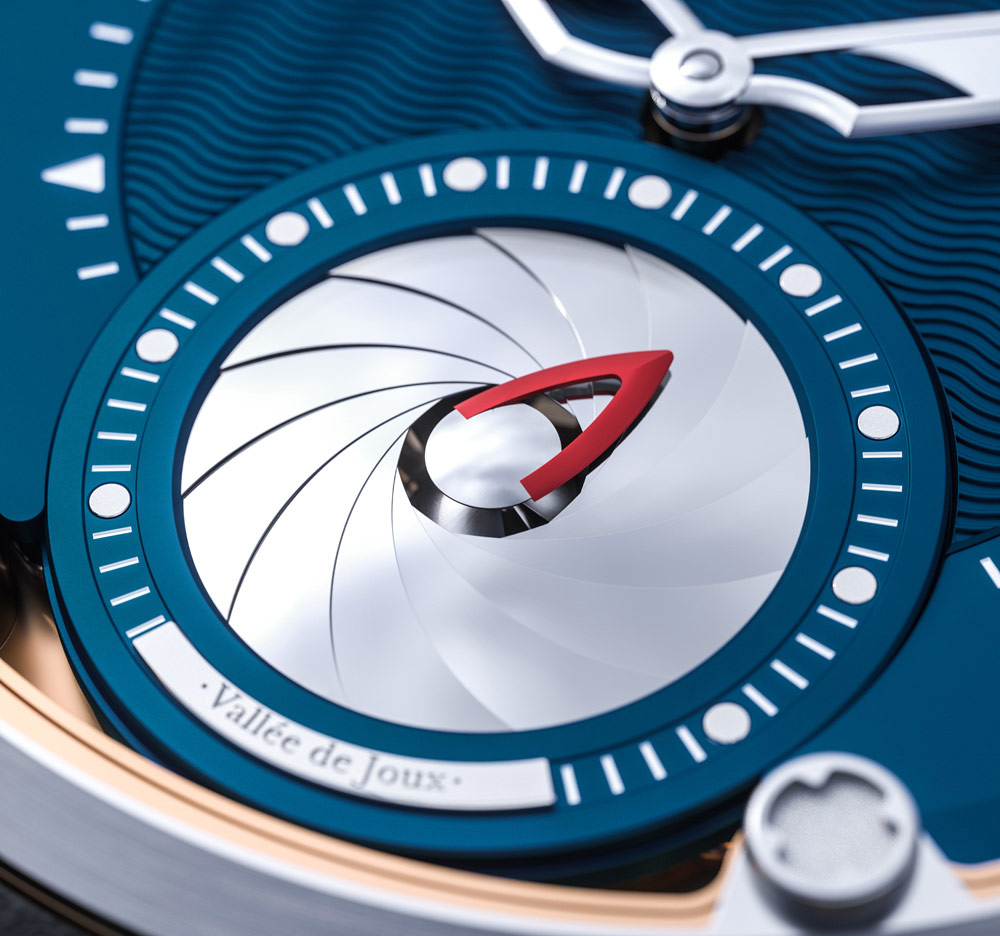 And here’s where the Montandon Windward TMA01 V1 does something a little different from other tourbillon watches. Using the left-hand crown, one can open and close an iris to reveal and conceal the tourbillon. The seconds hand sits above the iris to continue being useful when it is closed. Montandon says that this shutter-like iris protects the tourbillon from magnetic fields, as we have seen from other mechanisms, for example, in the MB&F HM6 Space Pirate watch mentioned previously or even the Ball Engineer II Magneto S watch (hands-on) where a similar iris closes over the case back view of the entire movement. 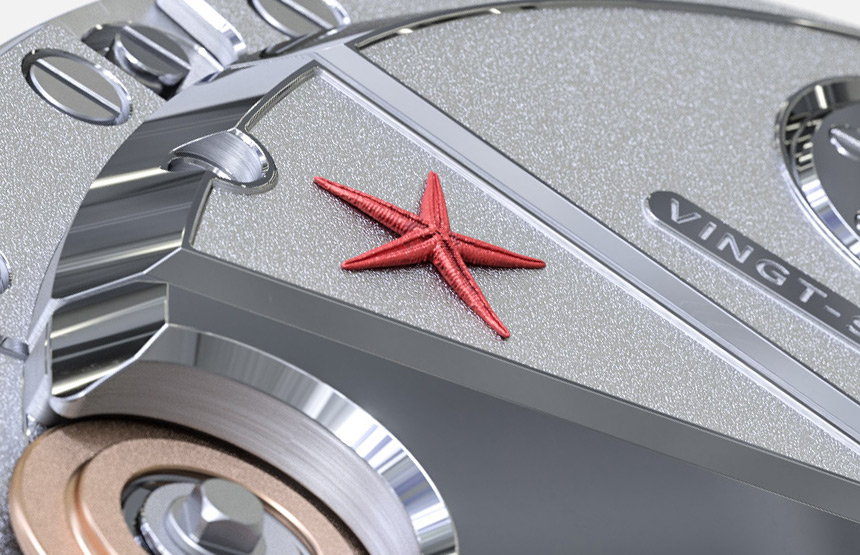 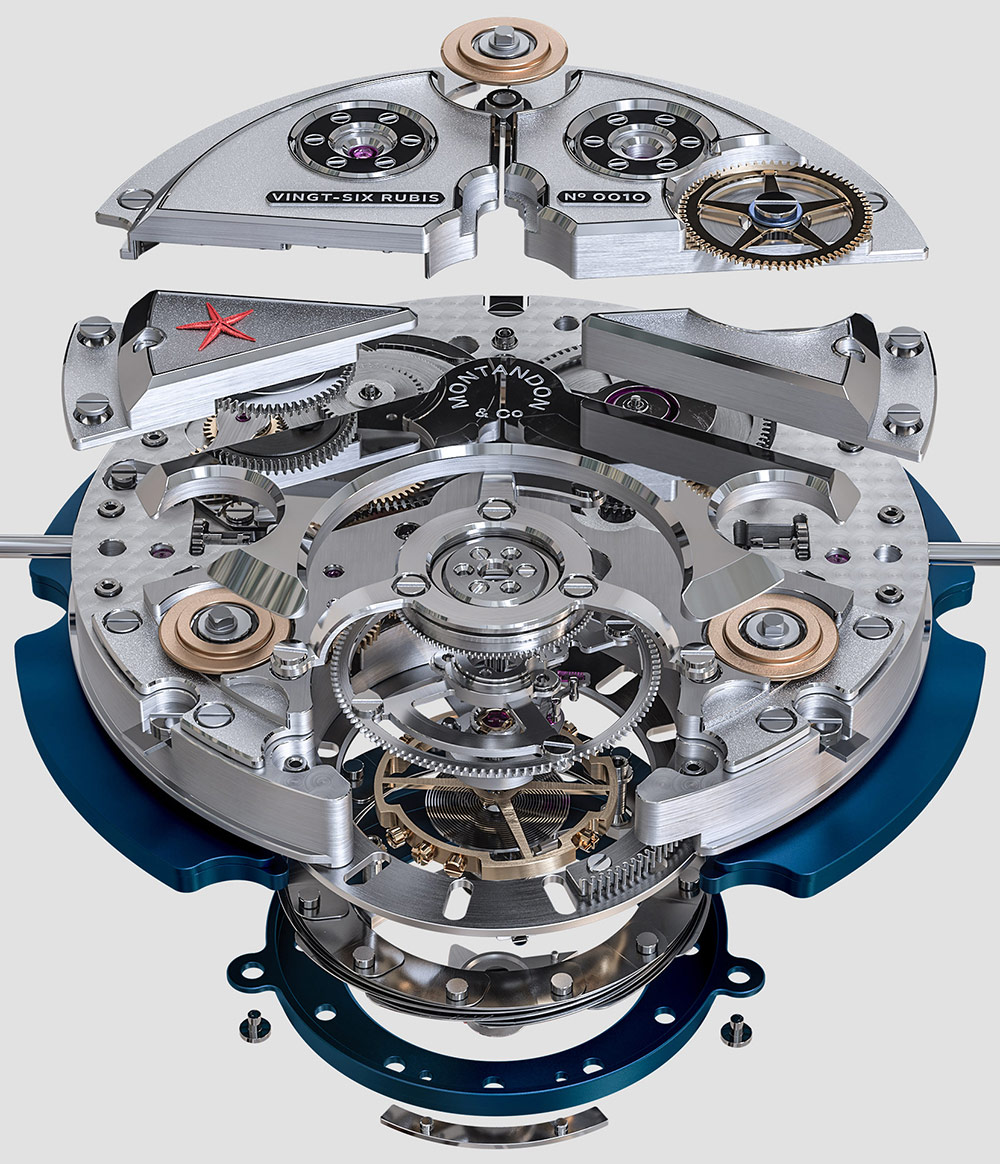 From the case back side of the Montandon Windward TMA01 V1, a peripheral rotor leaves the view open to the cleanly finished automatic movement. The deep bevels found throughout the movement are particularly cool-looking but we can’t comment on the final finishing since we still only have renders to look at. The architecture of the movement, we are told, is based on a compass rose (the movements in David Candaux’s own watches also claim the same inspiration) – but I find that hard to see. I do see the little, red, lifelike starfish clinging in relief to the bridge, though. Consisting of “more than 250” components, including 26 jewels, the TMA01 V1 movement operates at 3Hz with a respectable power reserve of 72 hours. The compass rose shape can be seen again on the left-hand crown, and the star shape is echoed on right-hand crown as well as the alligator strap’s deployant buckle. The straps come with an internal pin pusher for quick changing. 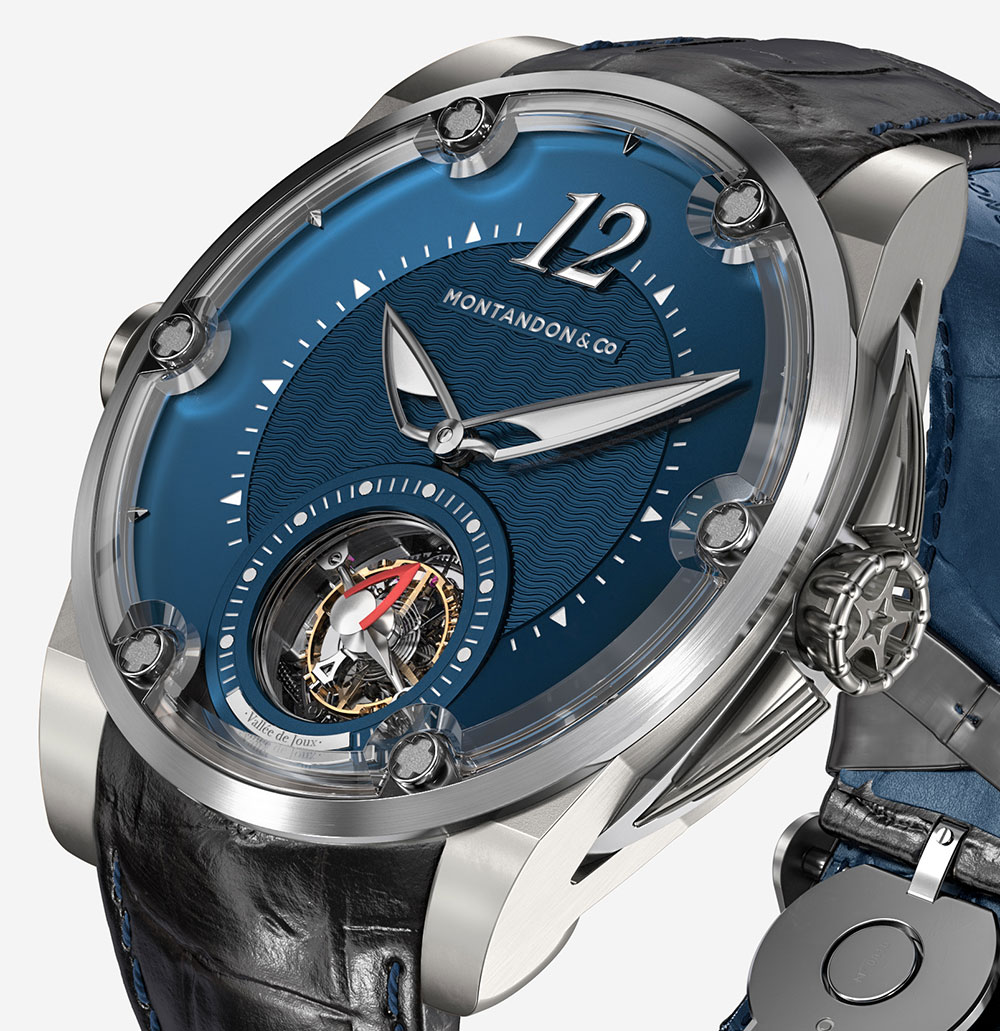