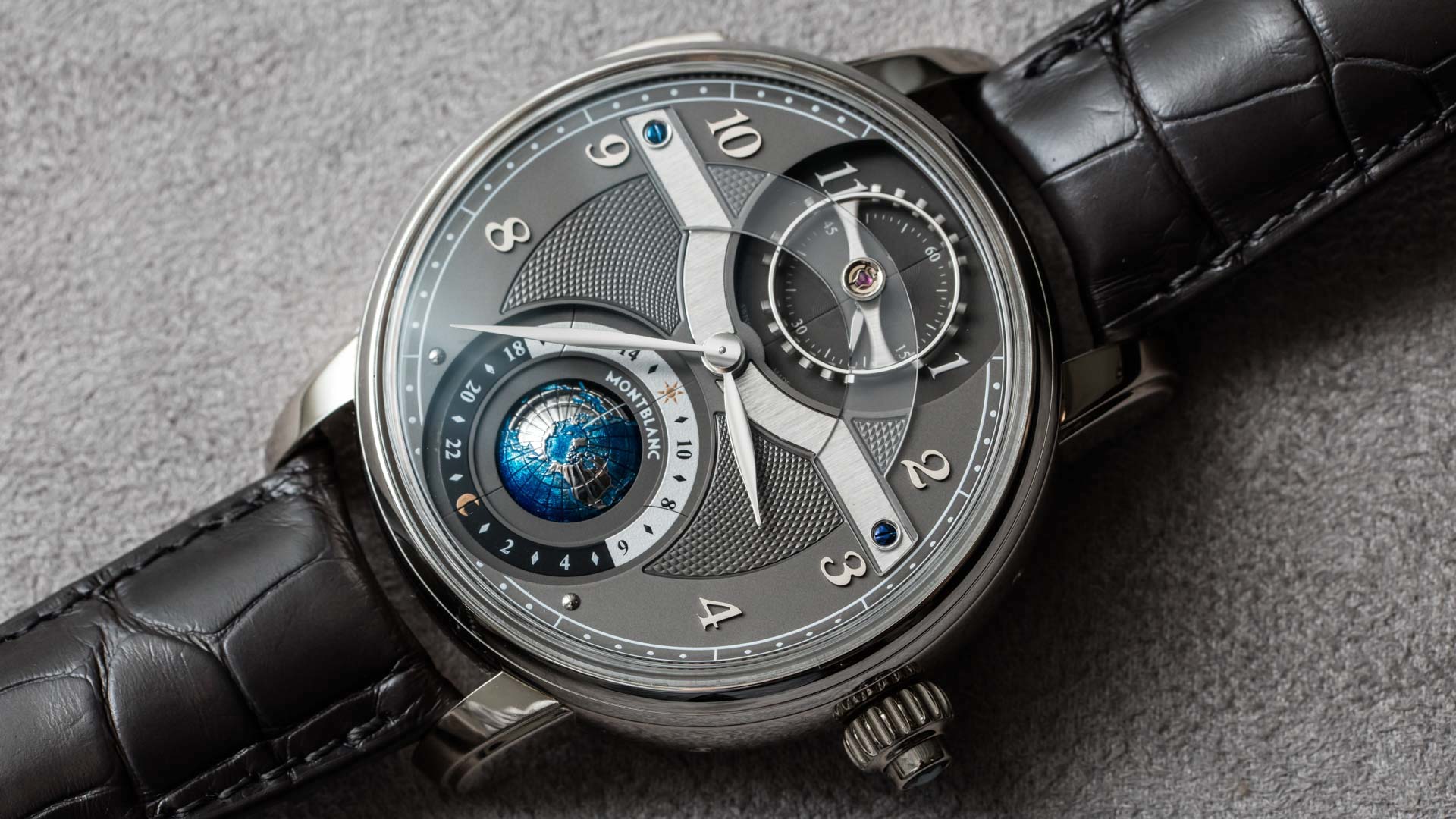 At SIHH 2019, Montblanc quietly introduced the third iteration of the complicated and extremely exclusive Metamorphosis collection. Produced in-house at the Montblanc Minerva facility in Switzerland, the Metamorphosis watches are known as such because of an opening and closing shutter system on the dial that transforms the face into something else — often revealing (or hiding) additional complications. The official name of this 2019 watch is the ref. 118832 Montblanc Star Legacy Metamorphosis Limited Edition 8, but for short, I might just call it the “Metamorphosis 3” or “Star Legacy Metamorphosis” watch.

A more or less unanswered question about the Star Legacy Metamorphosis timepiece is exactly how many pieces Montblanc will produce. The addition of the number “8” at the end of the name of the watch might be a hint, but watch brands have often included the number eight in the name or descriptions of watches as a means of appealing to some Asian customers who are said to consider the number a sign of good fortune. The figure eight design is also inherent in the visual aesthetic of the Metamorphosis dial, whose two opening and closing dial segments form a figure eight design. It is unclear if the Metamorphosis 3 is a limited edition of eight pieces or if there will be more, or fewer, of them.

Despite the technical wizardly incumbent in watches such as the Metamorphosis 3 (the movement, alone, contains 718 parts), watch collectors often have difficulty wrapping their minds around brands such as Montblanc that produce watches ranging from about $1,000 to hundreds of thousands. I call it the “Seiko syndrome” when a lot of watch buyers found it difficult to grasp the luxuriousness of Grand Seiko with a universe of (comparatively speaking) more meager Seiko timepieces running around. Why exactly can’t a brand produce a range of products, and why do even educated consumers, such as those who collect timepieces, feel uncomfortable buying something exclusive and special from a brand that also produces rather non-exclusive items? In fact, some of these high-end, complicated marvels from larger-volume brands like Montblanc are among the most interesting and best-designed ultra-luxury timepieces out there. Blame overly conservative collectors for ignoring them. Their loss can be your gain. 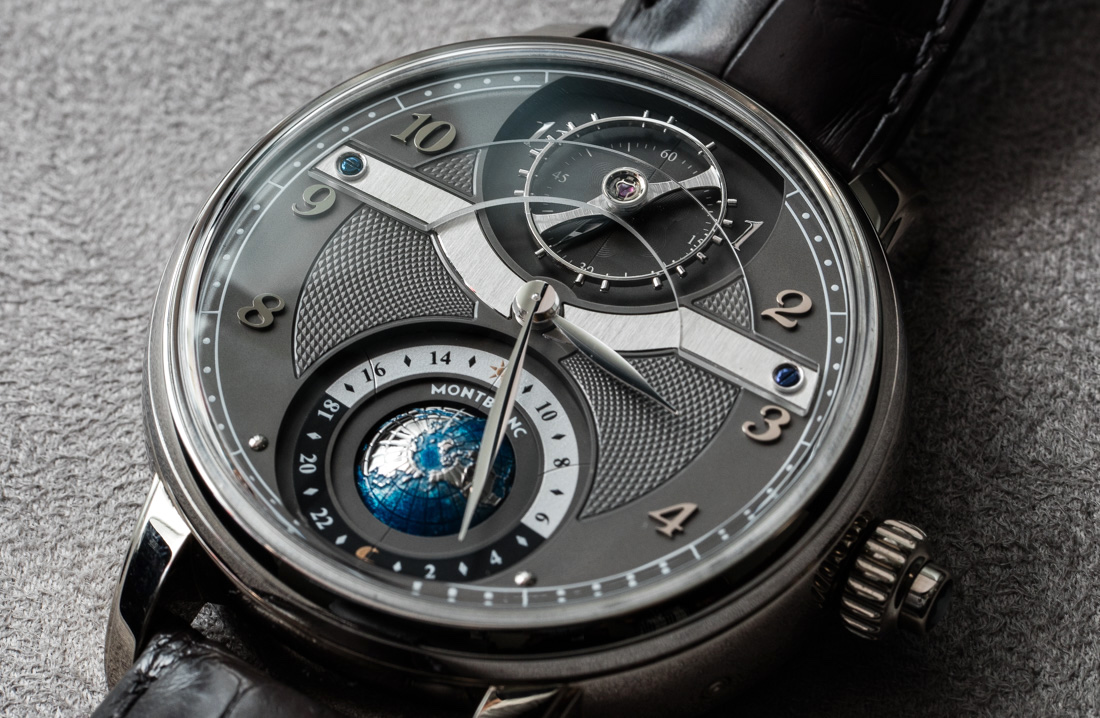 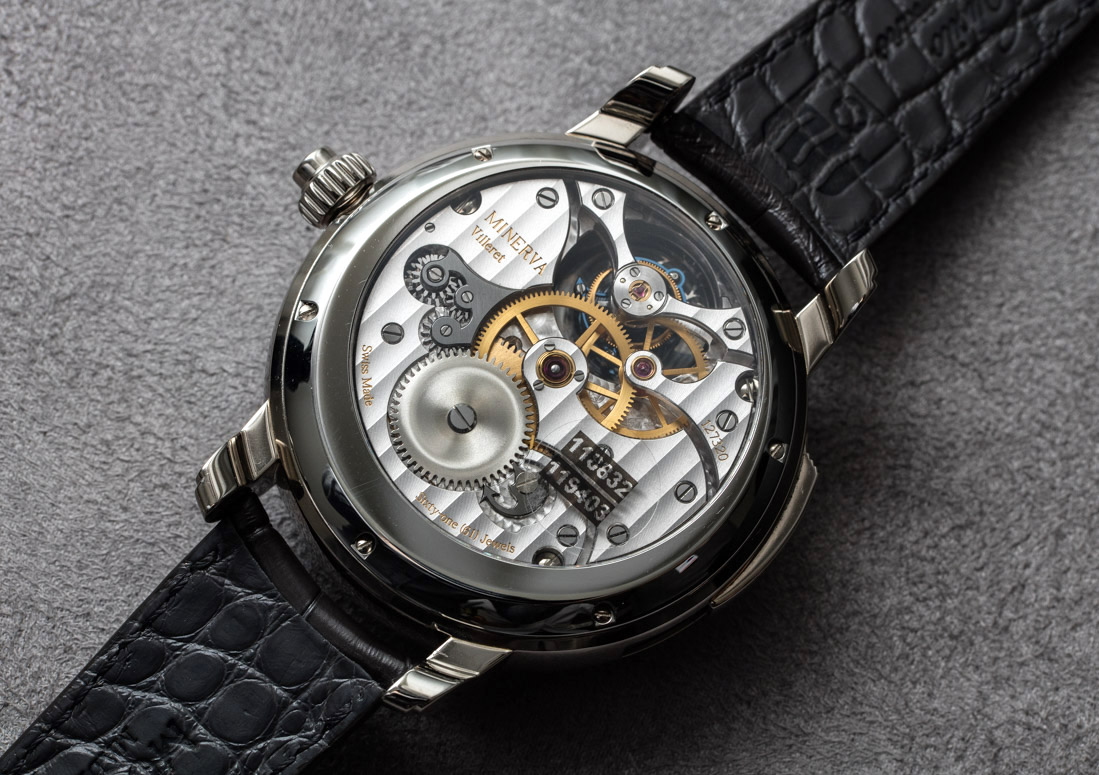 The original Montblanc Timewriter 1 Metamorphosis from 2010 (on aBlogtoWatch here) was a sportier watch with a chronograph complication. Four years later, the Montblanc Metamorphosis II (on aBlogtoWatch here) was redone with the same movement and a more classic-style design. For 2019, with the Metamorphosis 3, Montblanc has fundamentally changed the underlying movement, designed the product within the Legacy Star collection and, more or less, only maintained the metamorphosis shutter system for the dial. That makes this watch the first truly new Metamorphosis product in about a decade, though the case retains its wearable, but almost larger than life, 50mm-wide diameter. 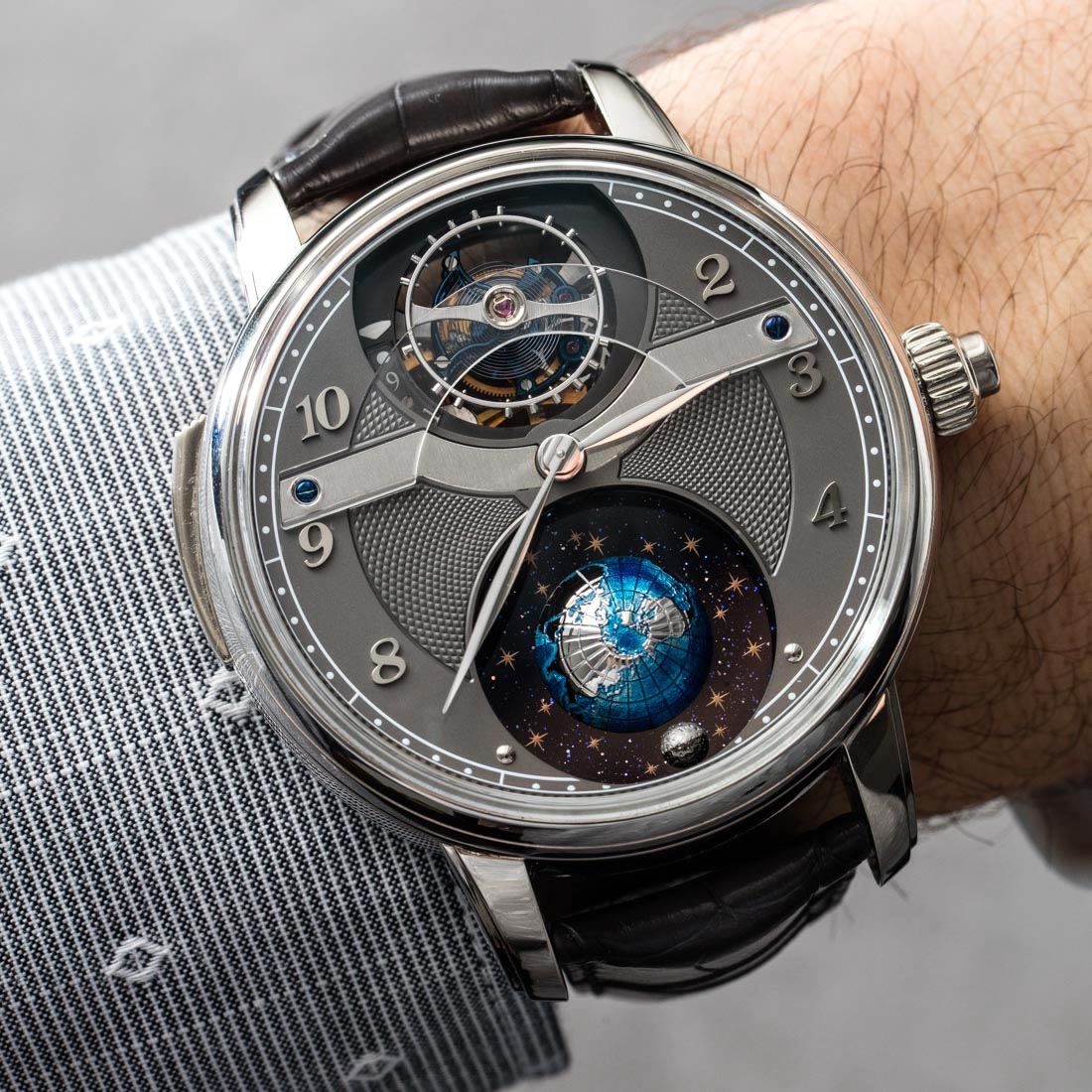 You can see how the 50mm-wide and 18.9mm-thick 18k white-gold case (water resistant to 30 meters) sits on my wrist. The Star Legacy Metamorphosis is one hefty watch, but it looks appropriate and doesn’t feel like a monster on your arm. Note how, in the Star Legacy Metamorphosis, as well as other higher-end Montblanc watches, the Montblanc star logo in the crown is done in mother-of-pearl. Also on the case is a minute repeater-style sliding lever on the left side; the lever is not for a minute repeater, but rather the tool used to activate the dial metamorphosis system. 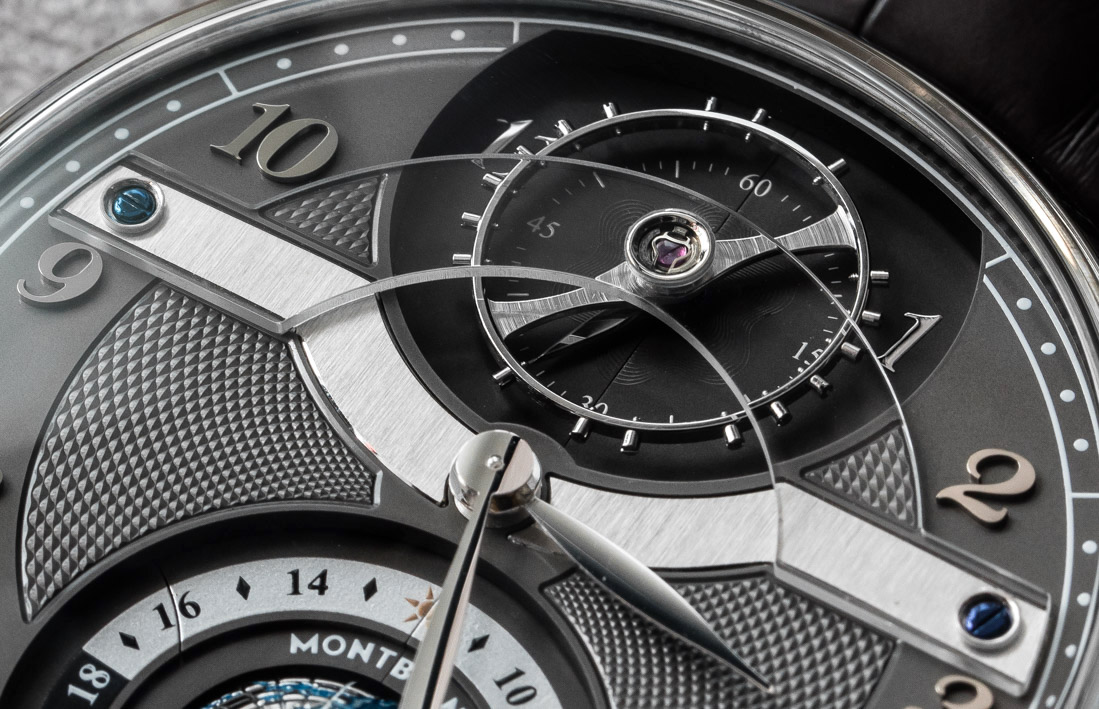 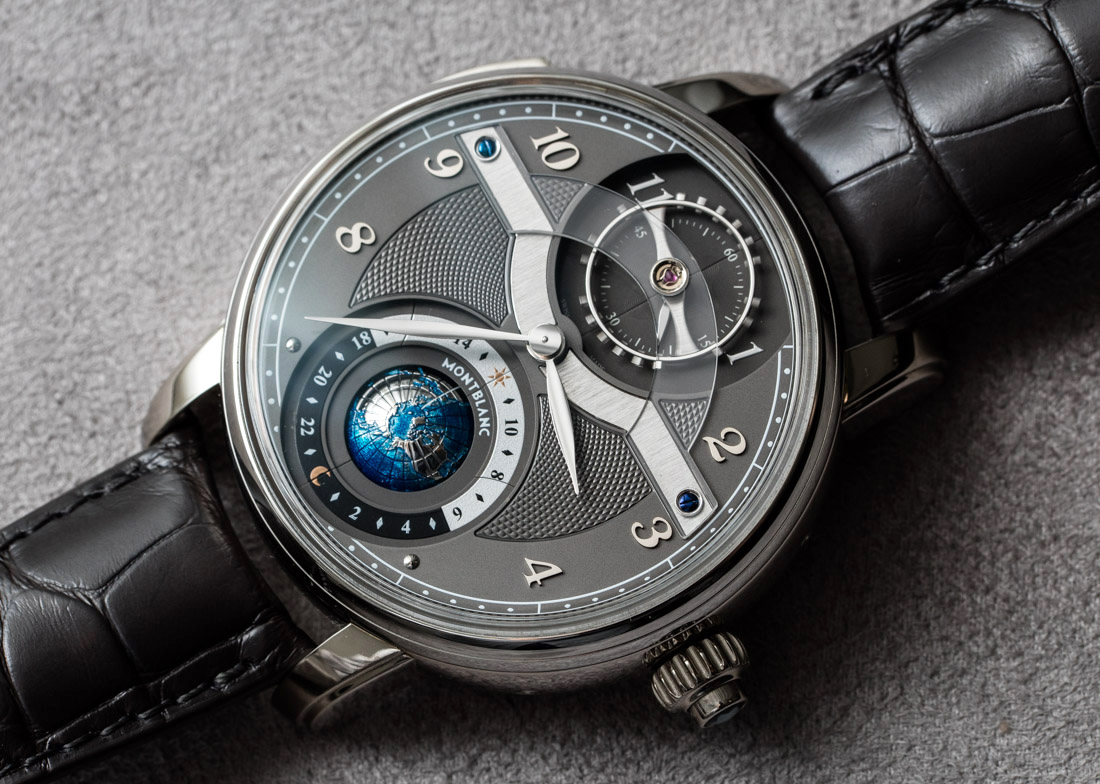 In the pictures I’ve taken, you can see the watch dial in both “closed” and “open” form. Montblanc did an admirable job designing this concept within the Star Legacy collection — which mostly involves the hands and hour markers (that I’ve always liked as put together). The anthracite-colored dial has some guilloché engraving on it, as well as the applied hour markers and bridge-style structure that give it a classy look. With the dial “closed,” you have an open view of the balance wheel at the top of the dial, an off-centered display for the hours and minutes, and a small hand-painted globe that rotates once each 24 hours. You can also roughly see the time in other time zones when viewing the hour marker scale around the globe. 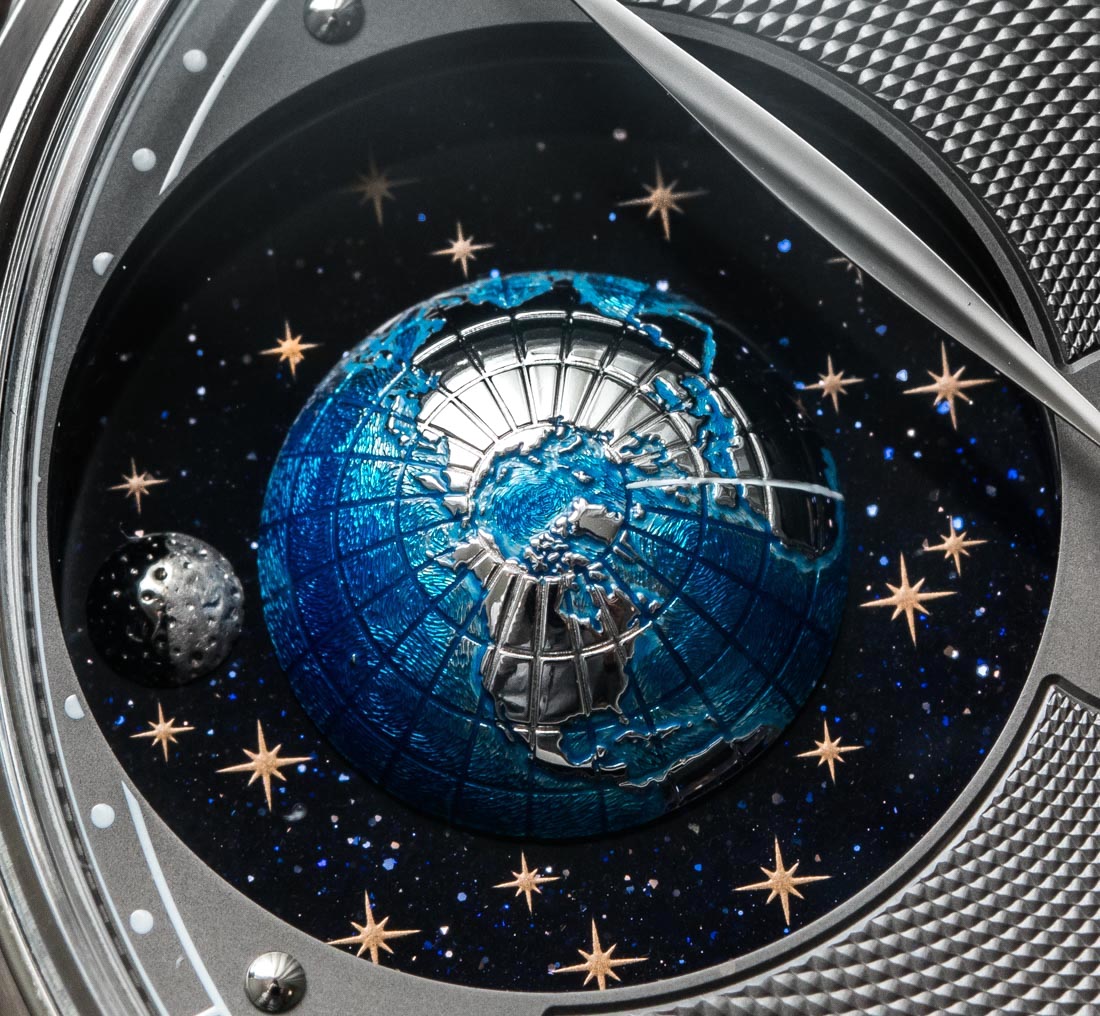 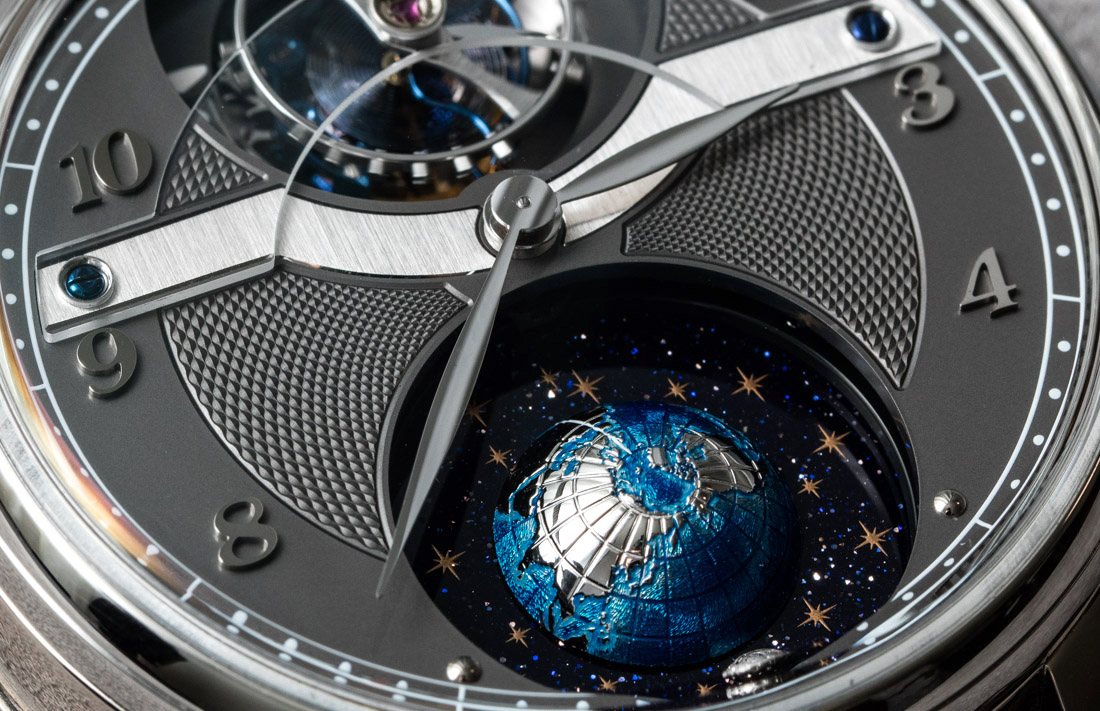 Opt to open the dial, and you get an even better view, in my opinion. Montblanc now incorporates their “exo tourbillon” system into a Metamorphosis product for the first time. This exotic tourbillon is one in which the balance wheel sits on top of the tourbillon cage (as opposed to within it). In fact, the balance wheel even sits on top of the seconds hand, which exists as part of the 6o-second tourbillon assembly. A final detail I find impressive is the use of a sapphire crystal segment to complete the bridge over the tourbillon. 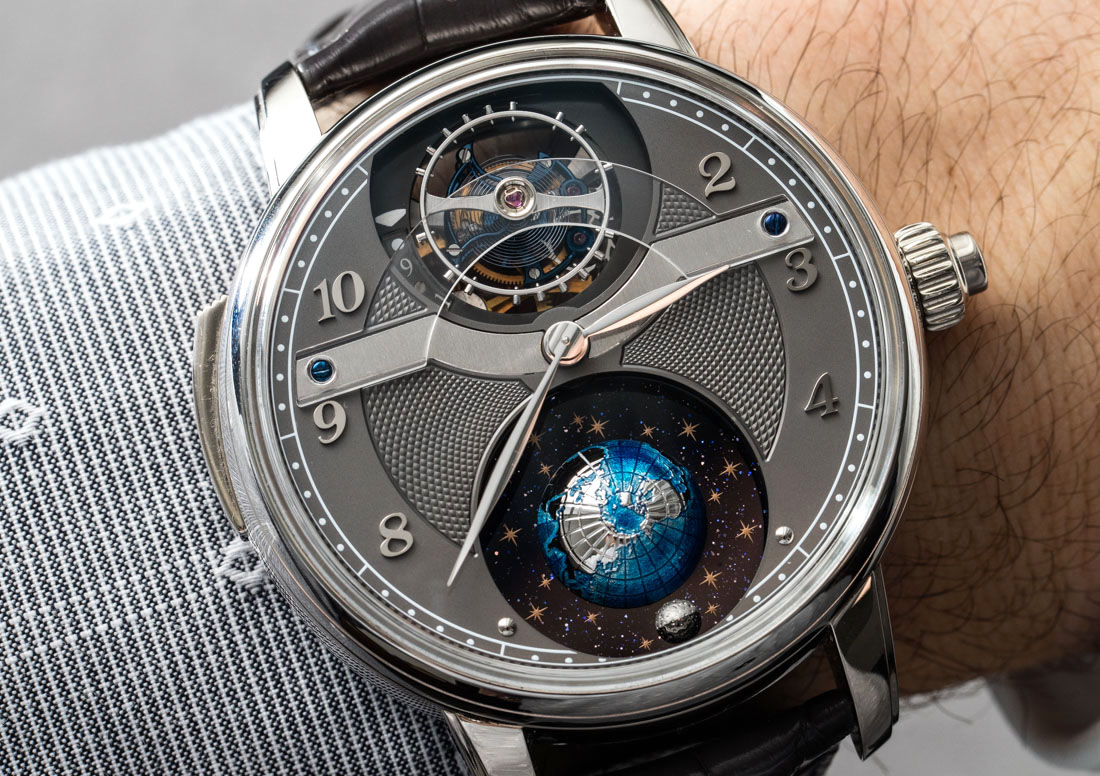 If you look to the left of exo tourbillon, you’ll see a small opening, which is actually an indicator for the date. I love how they find ways of adding new complications in there, just because. Just as impressive is the opening on the bottom of the dial that offers a space-like view around the painted half-globe. Here you will also find an additional complication in the form of a moon phase indicator. This uses a small sphere that not only shows the phase of the moon (as observed from earth), but also the relative position of the moon around the earth. The small orrery display is beautiful to look at, with painted starts on an aventurine disc. I’m a sucker for these spacey displays, and it looks incredible as rendered. 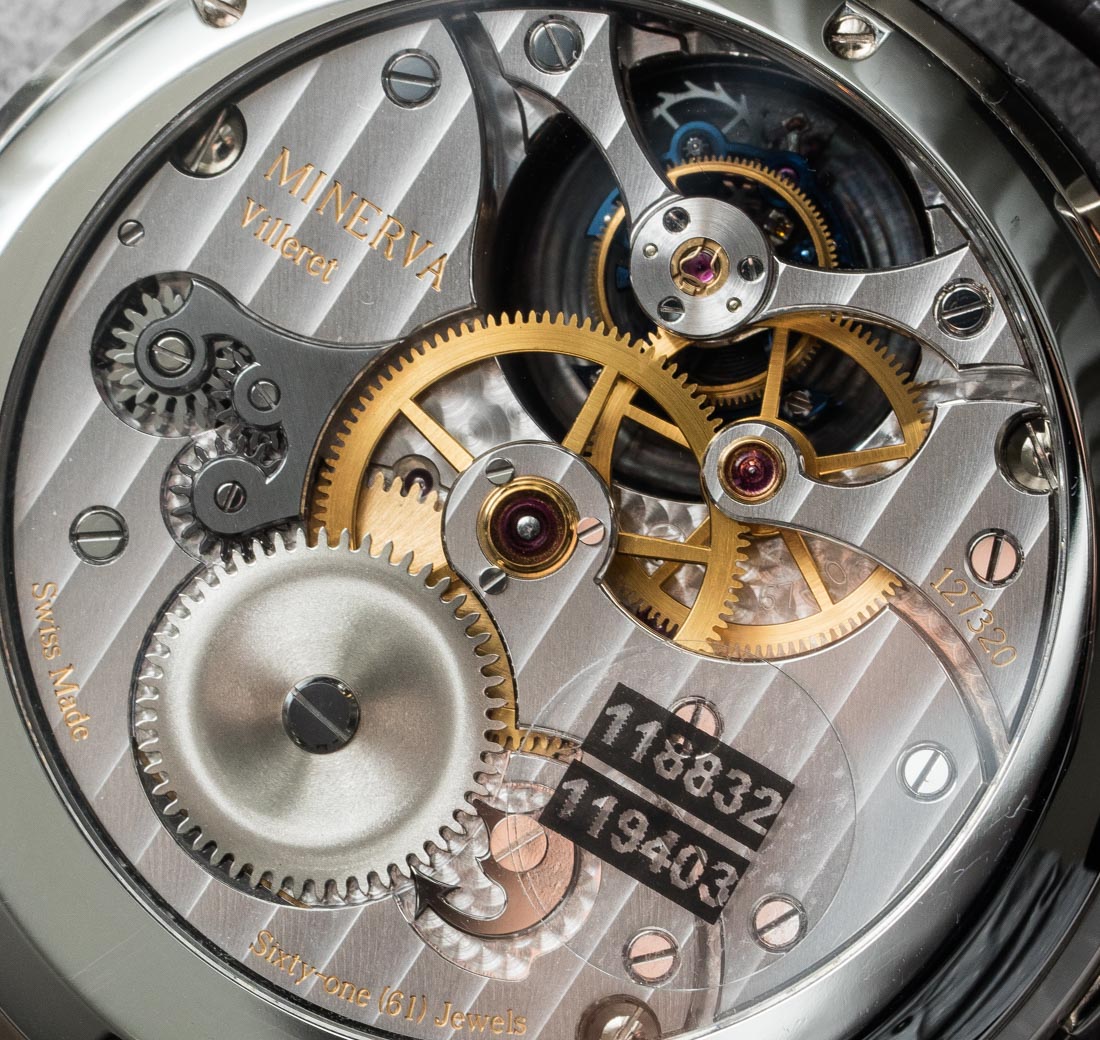 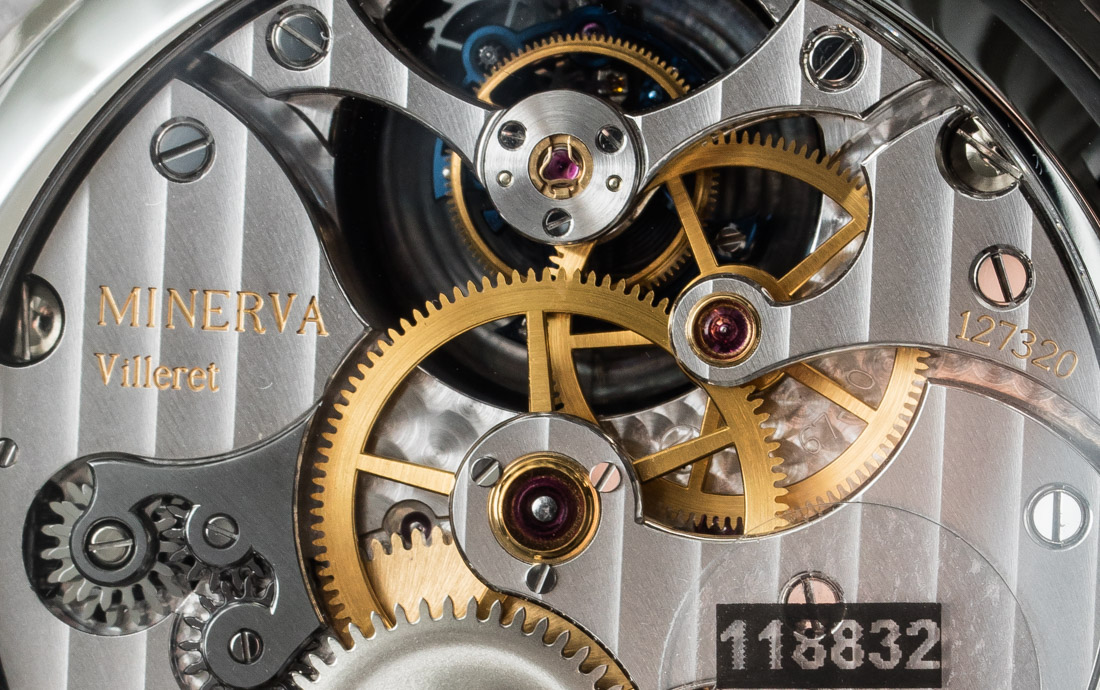 The movement inside the Star Legacy Metamorphosis Limited Edition 8 is the Montblanc-manufactured caliber MB M67.60. Produced at Montblanc Minvera in Villeret, the manually wound movement operates at 2.5Hz (18,800 bph) with a power reserve of about 50 hours. The metamorphosis system is powered by the action of sliding the case’s side level and thus doesn’t impact the mainspring’s power at all. As I said above, the movement is comprised of 718 hand-finished parts, with an additional view of the movement through the rear of the case. 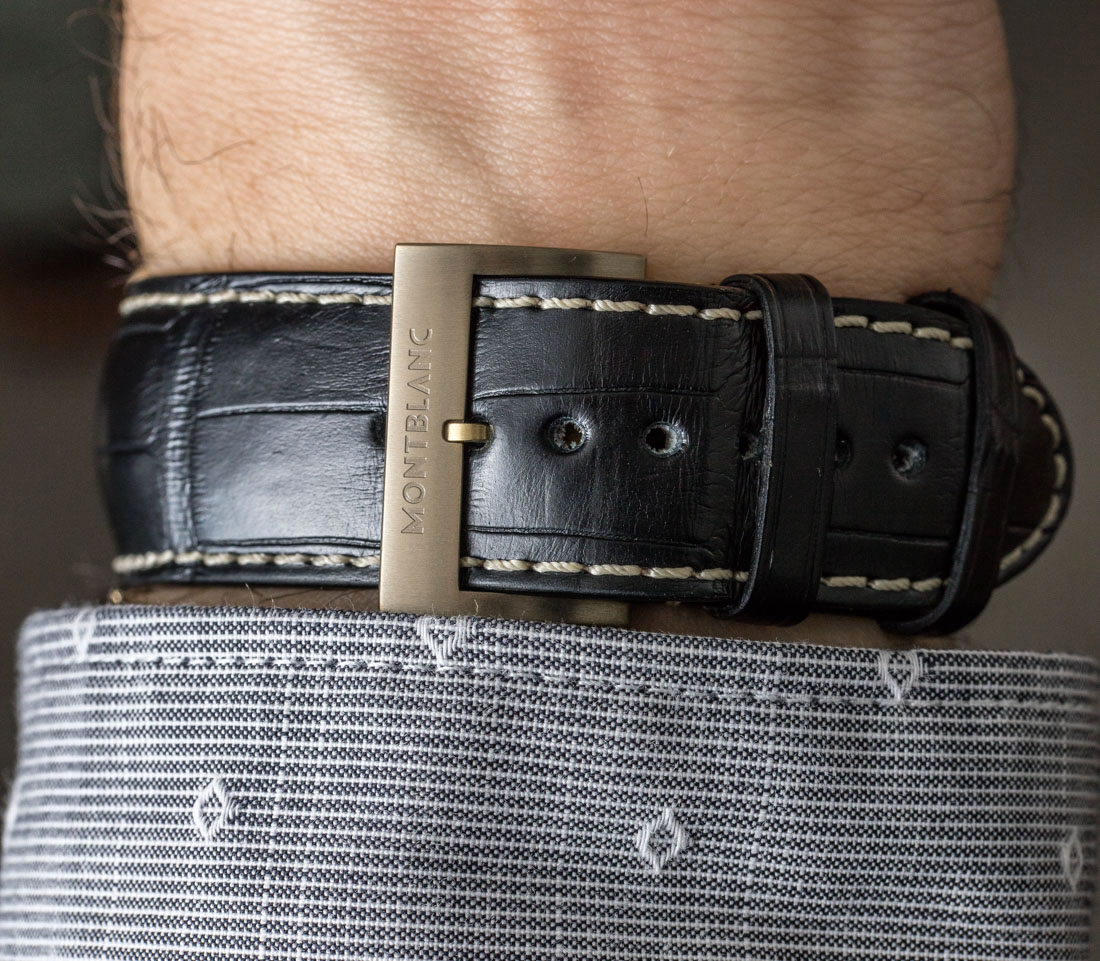 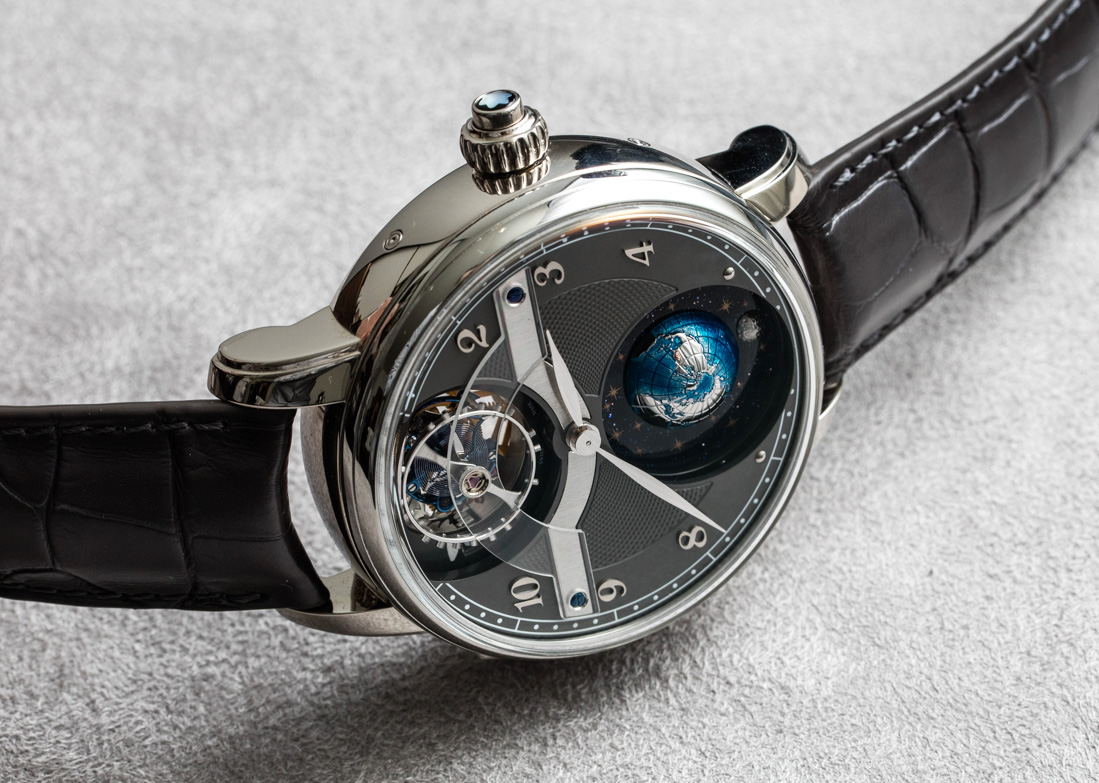 Exotic and exo tourbillon-equipped, Montblanc’s latest mega-timepiece does not fail to impress in technicality or aesthetics. Collectors in the know will agree that no other company produces anything like this, allowing Montblanc to earn its share of accolades for this watch — that is, if enough of the more conservative collectors open up their minds a bit and realize that a brand selling items in mainstream department stores can also produce incredible rarities such as the ref. 118832 Montblanc Star Legacy Metamorphosis Limited Edition 8 watch. Price is $223,500 USD. Learn more at Montblanc’s website here.