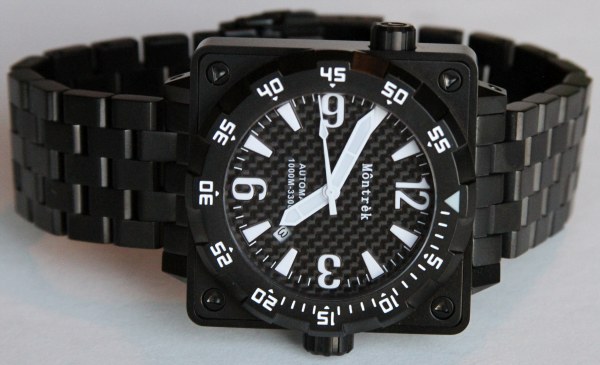 Man meet man watch. This isn’t a piece your girlfriend or wife can snatch from you and strap on themselves. No sir. This watch is about as masculine as it gets – and whether or not you like how it looks it will be hard to disagree with that conclusion. From Montrek this is the Square Diver PVD watch. Which also implies there is a non PVD black version. Sort of like a Bell & Ross BR01 meets actual warriors as opposed to weekend ones.

The Square Diver case is in steel and a 44mm wide square. That is a bit smaller than the 46mm wide BR01. As a diver the case is water resistant to 1000 meters and has a rotating diver’s bezel. On the left side of the case is a helium escape valve which quirkily juts out. Simple at first, the case and design are quite charming in a sort of macho manner. The simple two-tone black and white case and dial is very military looking, and the dial contrast is good. Applied to the dial are the hour markers that are lume filled. I don’t believe Montrek uses SuperLumiNova, but the lumed areas are large. The dial is carbon fiber which in this instance is a nice sporty touch. I think a matte dial would have made the face look a bit boring. I am also happy that the hands aren’t really too short – as this is often an issue I worry about.

Overall the case size is good for most wrists – large but not overpowering. If the steel bracelet intimidates you there is a rubber strap as well. Though I personally feel that it looks pretty swanky on the multi-link PVD black steel bracelet. The detailing on the watch is overall good, and the features come across as useful rather than just for show. I always worry about pieces like this being more sport-esque than sporty. Inside the watch is a Japanese Miyota caliber 8215 automatic with hand-winding movement. A simple automatic, it has the time and date. Many will want a Swiss movement, but this Miyota is a decent workhorse. I am left with feeling that the watch is very straight forward. Montrek offers a pleasant watch with enough quirks to give it personality. The strong masculine design of the watch might not make it ideal for daily wear at work, but it is a fun piece that will hit the stop on many occasions. The guys will love it. This ref. M22.1222.M220 Montrek watch retails for $1,100 and is available online via Montrek’s website.

Thanks to Montrek for the review unit, opinions are 100% independent.