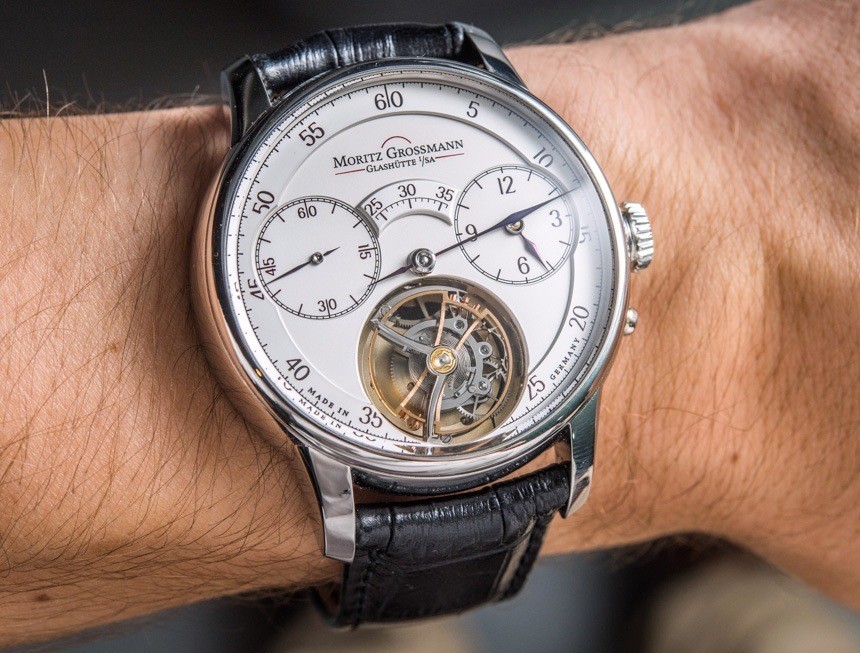 With that said, let me go over the basics of this very handsome 103.0 movement which is produced from 245 parts – mostly in German Silver. The tourbillon itself is actually not a standard one-minute tourbillon that revolves each 60 seconds, but rather, a three-minute tourbillon that makes a full revolution each 180 seconds. The large 14.2mm-diameter balance wheel operates at a steady 18,000bph frequency and the watch has a power reserve of 72 hours. The only feature missing in the movement that I would have preferred is a power reserve indicator. I don’t even mind if it is placed on the rear of the case on the movement, but more and more, I am seeing a power reserve indicator as being a necessary component of any finely made and manually wound watch movement whose aim appears to be accuracy and precision. If you promote a movement as being something which is all about performance and accurate setting, than you should probably have a visual reminder of when it needs wining, right? Luxury is about not having to remember exactly when you wound it last – at least, I think so. An appreciated design detail which marks the functional spirit of the brand is the “continued” minute scale that sits between the two subdials. When the minute hand crosses the lower part of the dial, the minute scale is interrupted by the open view of the tourbillon. In order to retain pure legibility, Moritz Grossmann designed the counterweight end of the minute hand to be read along the small supplemental minute track so as not to interfere with you being able to precisely read the time. Typically, I am not a huge fan of regulator-style dials, but I make happy exceptions for interesting models such as this which take the traditional concept and make it fresh, while adding their own twist to it. The super legibility of the Moritz Grossmann BENU Tourbillon dial along with the perfect proportions of the hands is the type of thing you pay for when getting a traditionally conceived yet very high-end modern German mechanical watch such as this. I have a feeling additional versions of the Moritz Grossmann BENU Tourbillon will be released in the future, but for now, the only model available comes in an 18k white gold case that is 44.5mm wide and 13.8mm thick. I’d love to see a rose gold model with a black dial that has just as much legibility. The dial is in solid silver, and the flame-colored hands are more violet than the traditional blue. I believe Moritz Grossmann chose this violet tone (among the few you can get from flame-coloring) as opposed to blue just to be a bit more distinctive. Overall, the Moritz Grossmann BENU Tourbillon is a fine top to their current product catalog and sure to cause loads of desire for those who love timepieces of this ilk. Limited to just 50 pieces, the price is 168,000 Euros. grossmann-uhren.com