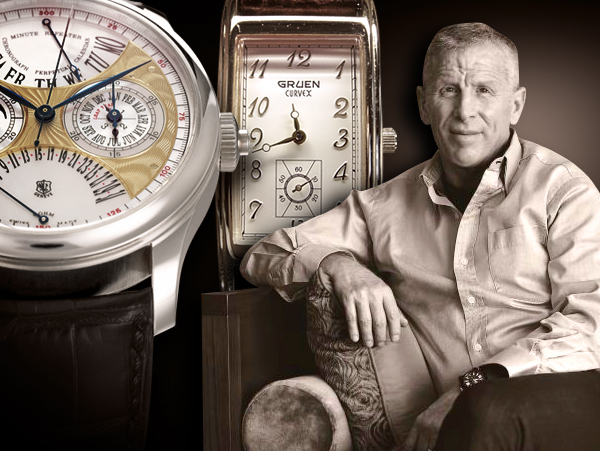 Advertising Message
Steven Holtzman (SH): I am the founder of Maîtres du Temps and a watch enthusiast from early childhood.

SH: Actually, my grail watches have changed over the years based on my perception. As a child I had a great appreciation for old American timepieces. My first was the Gruen Curvex. The company dates back to 1894 and the current Rolex building you see from the train in the mountains of Bienne; was originally the Gruen factory.

I was amazed by the curved mechanism and so enthralled by how someone could make a watch movement that was curved to fit the wrist. The word Curvex was a trademark that was owned by Gruen and I would say was one of the most interesting ideas of that era.

As I matured in the industry from the early 80s until now, my perception has changed quite a bit. In my early 20s I was a fan of the pilot watch. I loved that it was so easy to read and it became clear to me it made a strong statement of time. But once I moved into the high-end Swiss watch category I was moved by the sexiness of the dials created at Roger Dubuis and Frank Muller.

I remember owning the Million Dollar Roger Dubuis watch for a period of time. The moment I saw it in Carouge I decided I must have it! What a thrill to wear something of such value, where the value was based on the mechanism and not the jewels. The feeling of strapping something like that on my wrist was reminiscent of getting my first crew cut as a boy and riding home on my bicycle. I felt six inches taller and certainly more handsome. It allowed me to realize that a timepiece was not about time but about the feeling it creates when you interact with it. I guess that was my big “AH HA” moment in the industry. The watch was a Hommage and was one of a kind, created by the man himself Mr. Dubuis.

ABTW: What did you like so much about the watches?

SH: With the Curvex I was amazed by the curve. It is something I was able to accomplish with the curved movement in our rollers on Chapter One and Chapter Two. In the case of the Million Dollar Hommage, I was fascinated with the concept of over 500 moving components, all working with such accuracy to create something that has never been done. And on top of the fact, that only one was made and it was valued at one million dollars!

ABTW: Was there ever a time in your life when you could afford either of them?

SH: I would say that I could never afford the grail watch of my day. My watch was always just ahead of me and I was never quite able to catch up to it. It was something I aimed for but it was always out of reach. As I often say, I am just a waiter in super fine restaurant. Sometimes, as in my case; I get to serve some of the best food to the world’s most exclusive patrons.

ABTW: You said you never could afford the grail of your day. Did you ever get a grail from an earlier time?

SH: In both cases I started out as the guardian of the timepieces. As I still have many Curvex timepieces from my younger days and when Gruen was a family owned business, I have been able to collect many over the years.

With the Roger Dubuis Million Dollar watch, yes it technically was mine for a while, until I was able to pass it on to a client who I hope has been able to enjoy it and care for it.