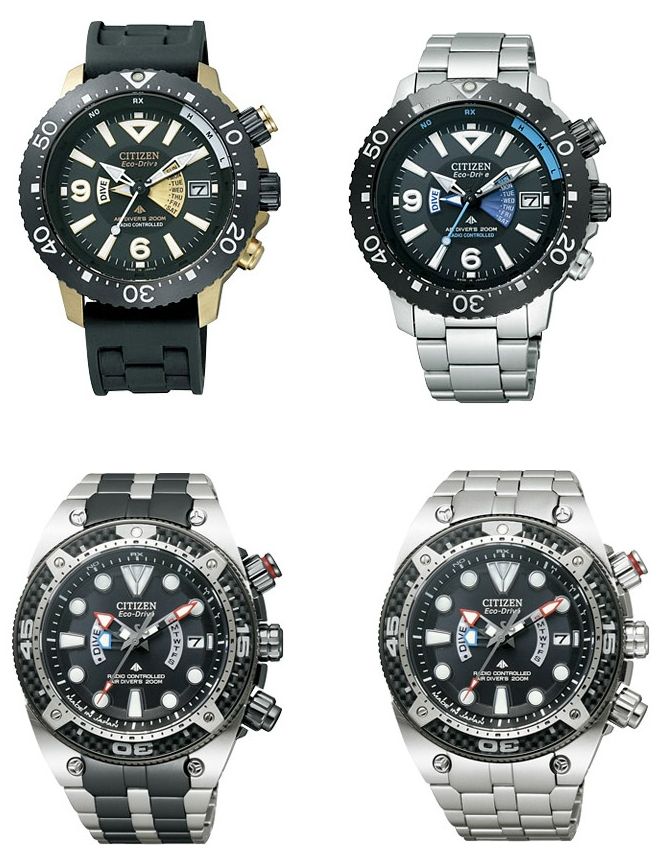 There seems to be a constant feature ballet involving Citizen, Seiko, and Casio. The dance involves elegantly weaving in an increasing amount of technology into watches while making them look appealing at the same time. For a while Casio was prevailing in the feature category, but most of the watches succeed in looking “cool and techy” at best. No self-respecting watch lover would display their plastic endowed Casio G-Shock or Pathfinder in a meeting, or on a date. Over time Citizen and Seiko began to incorporate some technologies that made Casio watches so desirable, and likewise, Casio began to take styling cues advice from their Japanese brethren.

For 2008, the Citizen Promaster line has some new looks, and incorporates and Eco-Drive and radio controlled movement. This means that they are powered by light, and accuracy is dictated by the radio signals sent from an atomic clock (if you are in Western Europe, Japan, or the US). The Eco-Drive movement has been around for a while, and works wonderfully as long as the watch is worn a few times a week, or is stored in a location with amble lighting. These models have no energy reserve indicator, but can hold a charge for months on end.

In terms of the radio controlled feature, it used to be that this was reserved only for the Japanese atomic clock. New models however are “multi-band” and can receive signals from any place that has an atomic clock. If you are out of range, you can still manually set the time. While in radio control mode “RX,” the watch receives periodic updates from the atomic clock to keep itself accurate. You can measure the strength of the signals by switching the watch to another mode as seeing where the hand falls on the “H, M, or L” indicators which mean high, medium, and low (for the signal strength). The idea is that you don’t want to be under any false positives concerning whether the watch is receiving signals or not.

The watch also has a calendar with the day of the week and the date. It is unclear whether this is a perpetual calendar or not, but you need to manually press one of the pushers to determine the day of the week. Interesting layout, but it does make the watches look attractive. From a style standpoint, there are the more classic models with the sharp rotating bezels (my favorite), and there are the more trendy carbon fiber inset models. The latter two may look a bit more rugged, but I like the classic look of the former, and the bezels that look taken from the Sinn parts bin. Legibility has always been of paramount importance in and Citizen Promaster or Diving watch. These perform decently well, though there are a number of lines that might allow for some confusion. Night legibility should be great given the large amount of luminant. With a 200 meter depth rating, these watches should perform well in most diving conditions. Pricing should be $350-$600. Watch for them soon.