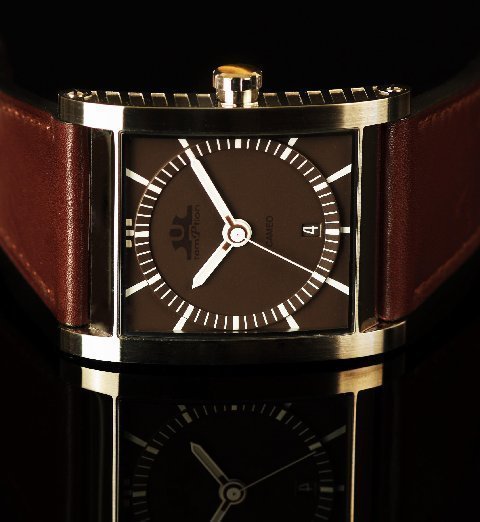 Last summer I told you about the new watch from Temption called the Cameo. It is their first square cased watch, and certainly unique. As is the case with most new watch announcements, the Cameo was announced long before actual release. Well, Temption has just announced that the Cameo is finally available. Actually, the watches are being shipped, but many are sold out until the beginning of 2009. For a company that makes fewer than 1000 watches a year, the demand for the Cameo watches must be overwhelming. Still, I don’t doubt that Mr. Ulbrich, President of Temption is ensuring that each watch comes out perfectly.

Temption is very proud of the process involved in attaching the sapphire crystal to the dial of the Cameo. As you can probably imagine, sapphire crystals are usually glued into place. This gives it a nice sealed look, but how strong is the bond? The Cameo uses a unique curved rectangular sapphire crystal (which I can imagine is expensive). Instead of gluing it to the dial and bezel, the sapphire crystal on the Cameo is chemically bonded (which sounds a lot like gluing) to the watch itself, which is apparently a more secure form of bonding that glue. Why is this? Well if you think about it, most sapphire crystals have all curved edges (most are simply round).  However, looking at the Cameo, the crystal has square edges, which are notoriously difficult to seal. Thus, if Temption used the ol’ gluing method, it could not ensure a good watertight seal. Never wanting to let anyone down, Temption decided to involve a more complex process in attaching the sapphire crystal so that it would be as watertight as possible. There is a special mirrored coating on the sides of the crystal to hide the bonding, making the effect completely transparent.

The image above is the first actual photo of a Cameo that I have seen. My earlier post has a computer generated image of the watch. As you can tell, they came out really nicely, and I like the shades of brown used on the watch. The design is so wonderfully simplistic it tricks you into thinking that not as much design effort went into the watch. It is just that type of detail that I appreciate and come to expect from Temption. I will certainly be wanting one of these watches when I get a chance.