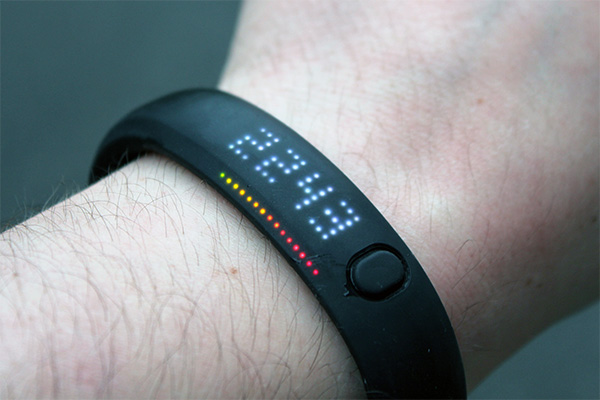 The Nike+FuelBand is device that you wear on your wrist which tells the time but I certainly wouldn’t call it a watch. The time telling aspect is really just an added bonus since you can’t simply glance at your wrist to take note of the time. It’s more of a lifestyle item with the primary function of keeping you active. Its goal is to track that activity over a 24-hour cycle and motivate you to keep going. For that use alone, the Nike+FuelBand meets and exceeds expectations. However from a watch-lover’s perspective there may be a few quirks preventing it from being the ultimate fitness accessory.

The design is unassuming and appears much like a generational leap forward from the Livestrong-style rubber wristband. Fitting, since Nike actually co-developed the now ubiquitous wristband with the Lance Armstrong Foundation. With rubber wristbands getting so popular over the years not a single person commented on it or asked what it was. This is a definite positive mark for the FuelBand designers as it is intended to be worn all day, every day, and as such looks equally at home in the boardroom as it does in the local bar. This variant is bigger and tougher-looking but has a lot more going on inside than a typical rubber wristband. Should you light the FuelBand up, it will definitely attract your inner geek as well as those around you.

Hidden under the black rubber skin is 120 LEDs. The primary array of 100 white LEDs displays alphanumeric information while an offset strip of 20 colored LEDs track your activity progress along a beveled edge. A single oval button flanks the display and is the only means to access different features of the FuelBand without plugging it into a computer or syncing it with a smartphone. This button is the sole blemish on the otherwise beautifully minimalistic facade. It is slightly raised and further accentuated by its cutout surround. I would much rather Nike had either blended it into the design more or made it stand out in an aesthetically pleasing manner. As it sits now, the button would look closer to a manufacturing defect than a design choice if it were not so symmetrical.  A spring-loaded stainless steel clasp holds the FuelBand securely closed while also sheathing the built-in USB plug. Nike claims the FuelBand is water resistant and is “safe to wear in the shower or when dancing in the rain”.  I’ll admit to testing the first claim but a situation to test the latter has yet to present itself. 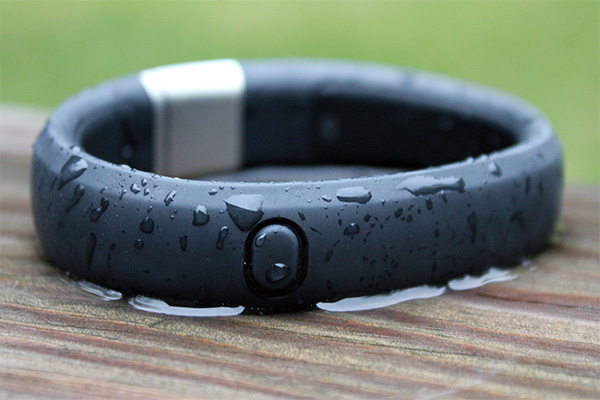 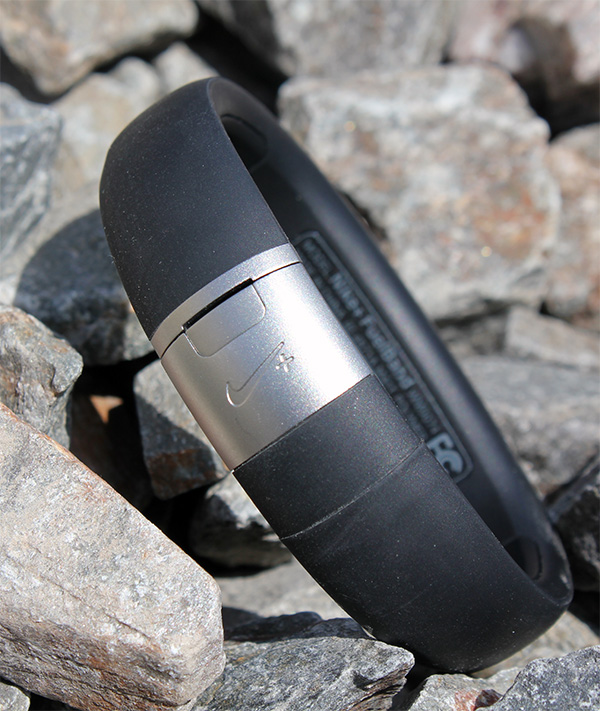 The band initially feels heavier than you might expect from its look and definitely far more rigid. Nike makes three sizes and which to order is easy to determine with the aid of their printable sizing guide. Each size includes an 8mm and 16mm link along with a simple changing tool to cover a wide range of wrist sizes. Setting it up consists of downloading a small program from Nike’s website and plugging in the FuelBand to one of your computer’s USB ports. It fits easily into a side port on most laptops but also includes an extension cord and stand for desktop use. The program will ask you to enter some simple information such as height, weight, age, NikeFuel goal (more on that in a moment), and which wrist you want to wear it on. Although the differences are slight, the FuelBand is definitely shaped to fit your wrist a particular way. Selecting which wrist you want flips the main display to read towards you. Since I wear a watch on my left wrist I set the FuelBand for my right wrist. Unfortunately the FuelBand was obviously designed with a left wrist bias so changing this puts the colored LED meter on the beveled edge facing away from you. It’s an annoyance but not necessarily a deal-breaker.

All of this exists for one main reason: NikeFuel. NikeFuel is Nike’s own metric of activity as measured by arm movement. A three axis accelerometer in the FuelBand is used to determine your arm movement as well as to approximate your calories burned and steps taken. Pressing the Fuelband’s single button cycles through the running total of each category as well as the current time. Nike claims that NikeFuel is “The ultimate measure of your athletic life” and since it is calculated the same for everyone, it can be better used for peer motivation and competition. You set what your Fuel goal is for the following day which can be changed at any time except for the current day you are in. While this can help give you a goal to push for on a day you plan on being particularly active it also means that you can’t cheat and lower your goal for the current day. I found the pedometer to be impressively accurate, testing it both walking and running over a few hundred steps only to differ by a step or two from my own count. It did log an average of 10 steps per minute while driving my 6-speed manual over a mix of city and highway driving but I didn’t take into account the use of my feet for clutch, brake, and gas so that might have ended up being a wash anyway. Wearing the FuelBand is extremely comfortable. I would take it off only to sleep though there is no reason why you couldn’t keep it on then. I just prefer not to. It never got in the way of any physical activity nor did I fear breaking it. If nothing else, the FuelBand is definitely tough enough to stand up to its intended use. 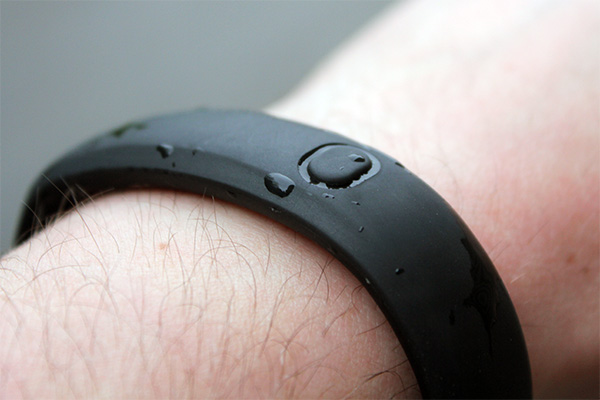 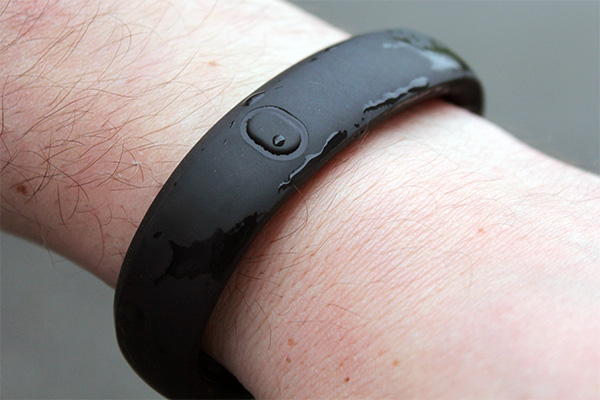 The Nike+FuelBand itself is only half of the equation. The other half is the NikePlus website and app. Plugging the FuelBand into your computer uploads the data it collects to Nike’s server and reports your results. The other option is to sync the FuelBand to your smartphone via Bluetooth. The app is currently only available for iOS but Nike assured me that an Android version will be out this summer. There is an airplane mode accessible by pressing and holding the button down. Nike’s tech specs claim that you should be able to get four days of use before having to recharge the lithium polymer batteries but I’ve used it for eight days between charges. Since I have an Android phone my not using Bluetooth might account for some of the difference in expected battery life. Most gadgets seldom live up to their advertised battery life so this is a welcome inaccuracy in favor of the end user. Unfortunately there is no way to check the battery status of the FuelBand on the device itself. You are only alerted if it is about to die.  Once your data has been uploaded to NikePlus your daily life is plotted out in terms of activity. In addition to your Fuel, Calories, and Steps for that day, your estimated distance traveled is calculated as well. The activity over 24-hours is graphed out and far more information is plotted per hour and highlights such as when you (hopefully) hit your goal are marked. You can also view your general success or failure over the current or previous weeks, months, and years. Additionally, your Fuel score is compared to your own average, those in your age group, and everyone in the NikePlus community… for better or worse.

While using the Nike+FuelBand might not go so far as creating a Tamagochi Effect, I have spent a lazy morning on the couch only to be prompted to get up and do something more physical after seeing that the NikeFuel meter had not moved towards my daily goal. The FuelBand can’t track your heart rate or running route through GPS like some other fitness devives but the way it works without bothering you is a definite plus. It’s just always there and always recording. This is geared more towards those who are currently active and want to track their activity as well as those looking to become more active and could use an additional nudge. While you might not necessarily feel like you let your Nike+FuelBand down by not reaching your goal it just might have you doing some last minute jumping jacks before bed to cross into Goal territory. Should you reach your predetermined Fuel goal, you are rewarded with an animated “goal” message. There are a few that it cycles through to keep things interesting day by day. 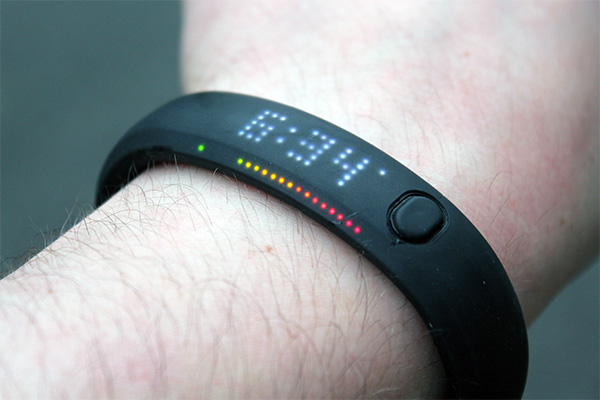 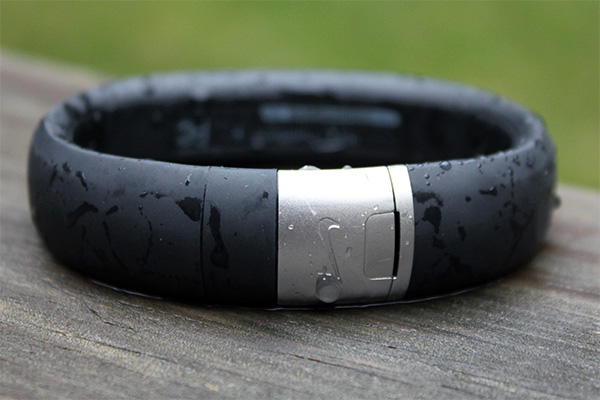 Although the FuelBand is designed to work on a 24-hour cycle, it would still be nice to have some sort of a lap timer. I occasionally find myself wanting to track a particular run or game I was playing without attempting to remember my starting point in the day. Hopefully something like this could be added by a firmware update or potential future versions could be equipped as such. As a watch lover I almost always have a watch on my left wrist. Because of this I set the FuelBand to be orientated for right wrist use. The exception is if I intend or expect to be out for a particular activity. If I’m going to go for a run, play some basketball, or even play the drums I’d likely forgo my usual “beater watches” in favor of this alone if it were easier to switch orientations. You can probably do this via the app but since I can’t use that on my phone, the only way to change the display is by plugging it into my computer. I typically leave it as is and change wrists despite the general annoyance of an inverted display. An easier way to switch the orientation would be a welcome addition, though probably not one that would benefit most users.

The core of the Nike+FuelBand is the simplified gamification of living an active life. Think of the colored LEDs as if they were a status meter to your next level. That’s where the FuelBand succeeds. It doesn’t beg for your attention in any way but allows you to access and track your stats when and how you want,  even unlocking achievements over time for reaching certain goals. Since it does blend into your daily life, the FuelBand might just keep you using it and help in getting you moving. Those unsure if it’s a good fit for them might find the $150 USD price point a bit steep. I would imagine that the price will drop in the future as Nike sells more and potentially comes out with new versions but that probably won’t happen too soon given the current hype and limited availability. If you are looking for device which tracks your daily activity without the need to input information as you go along this might be for you. Watch-lovers will also appreciate that it isn’t as much of a watch replacement as many competing products are and can be worn at the same time. Nike didn’t reach too far with the FuelBand but did manage to put together a solid addition to their Nike+ line of products. It does exactly what you expect of it and should find its way onto many wrists.

The Nike+FuelBand is currently only available online and in its Niketown New York store.