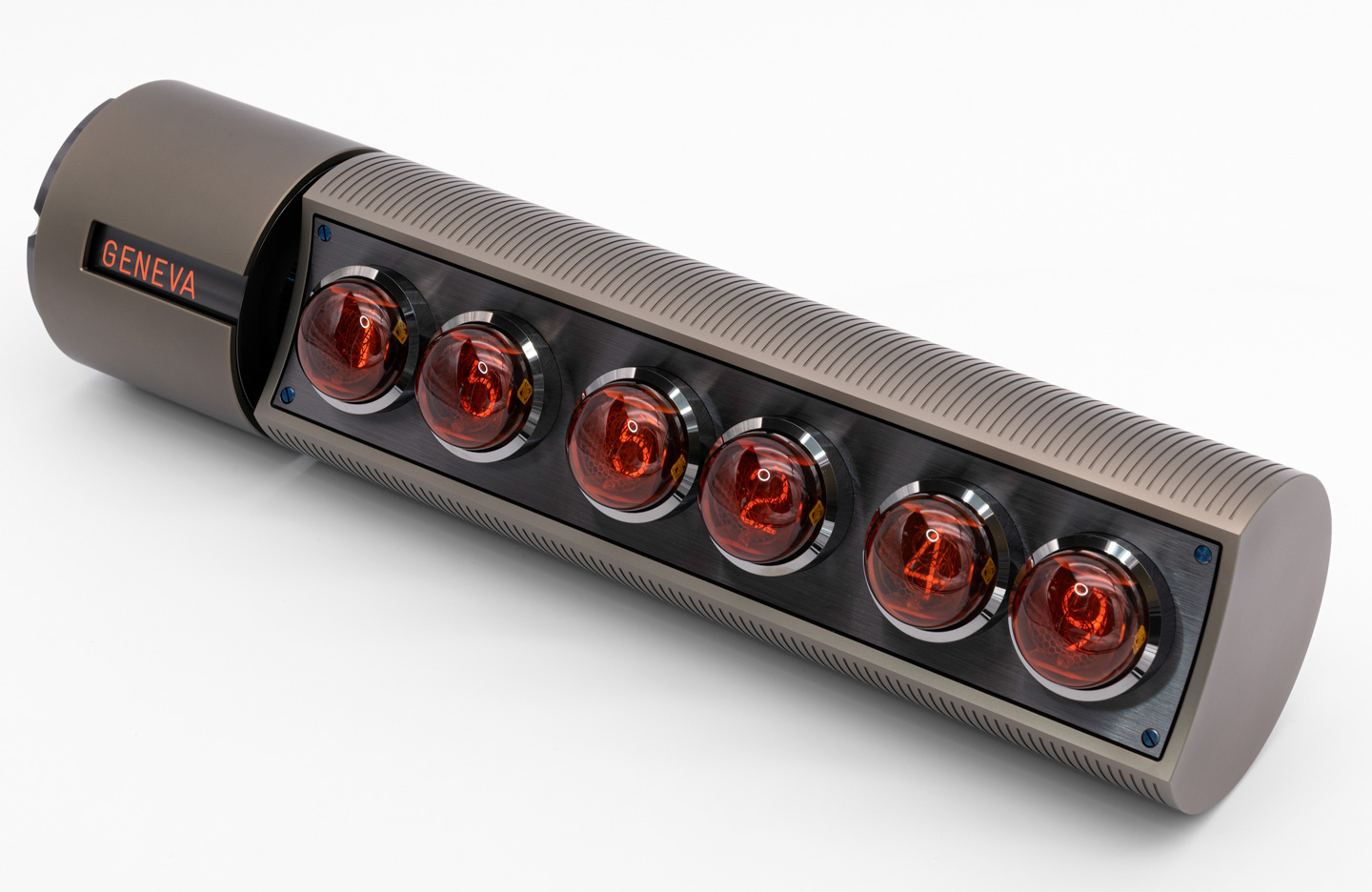 Veteran creative and production firm Adatte Design in Lausanne, Switzerland is no stranger to timekeeping, or good taste. Responsible for important elements of the wristwatch consumer purchase experience, including luxury watch brand packaging and retail store display sculptures — Adatte Design is slowly moving into the consumer space. One of the most elaborate consumer-focused projects completed by the firm is the Nixie Time Zone Clock Series, now available as the Nixie Time Zone Clock V2 (version 2). The Clock is more than an instrument to tell the time; it is decidedly artistic in form and presentation, being best described as a carefully conceived mechanical sculpture. After an introduction about the Clock itself, below you’ll find an interview with Adatte Design principal, Mr. Jeremia Adatte.

Functionally speaking, the Nixie Time Zone Clock is a machine that uses vintage (but new-old-stock) glowing in-line numerical indicator tubes — mostly known as “Nixie tubes” —  to indicate the current time (and date) in five of the world’s time zones (Dubai, Taipei, New York, London, and Geneva). A high level of potenital customization means that buyers of the Nixie Time Zone Clock can opt to replace the default city names with the cities or time zones of their choosing. Even names of people or places can replace the city names themselves, and languages other than English can be requested. 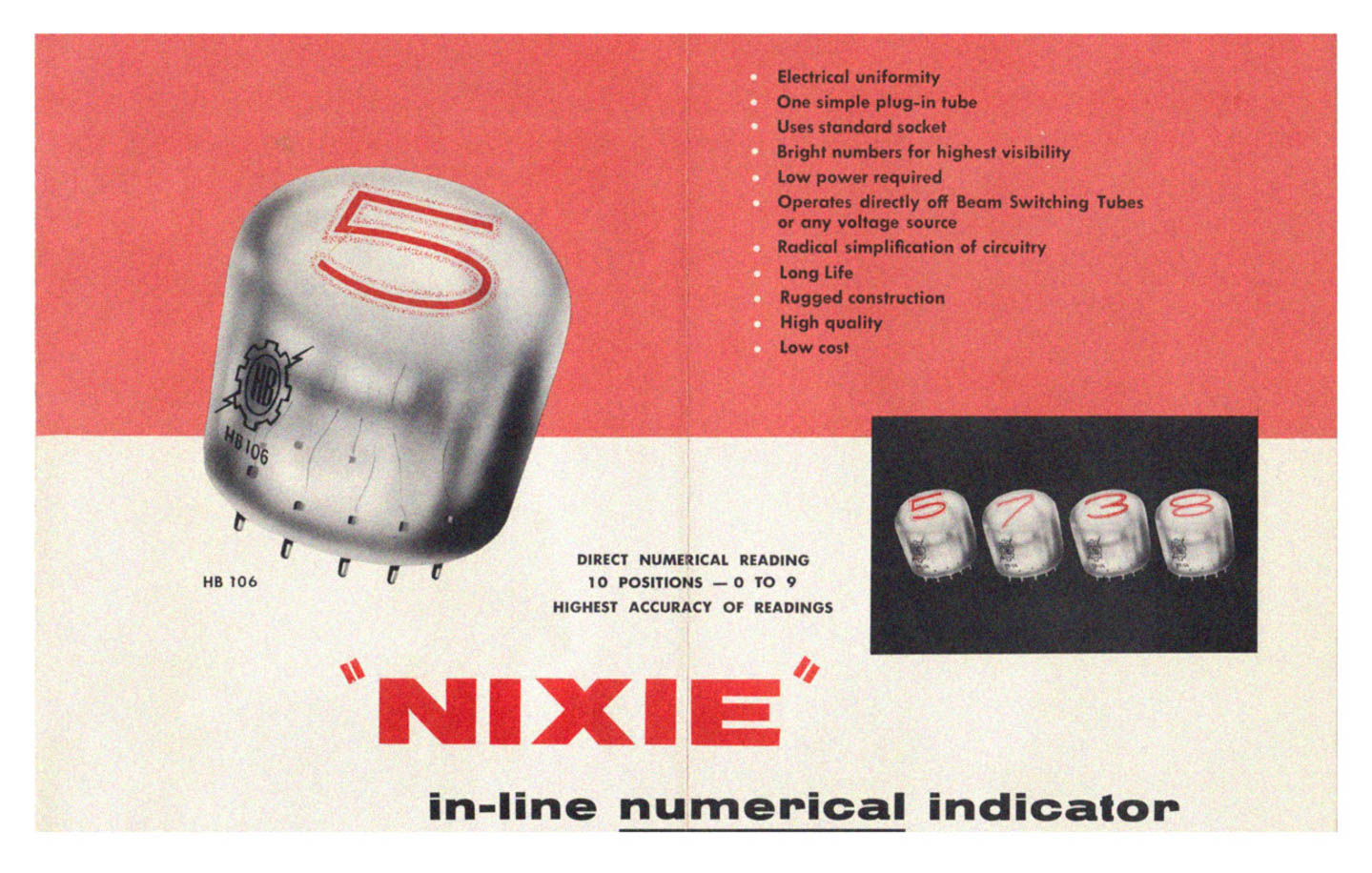 One can set the clock to display just a single time zone, statically, but it can also be set to use an internal motor system to turn a tube-style assembly on the side of the piece, which automatically rotates every 10 seconds, and the time display accordingly adjusts itself to match the city name. With an emphasis on legibility (even in total darkness), the Nixie Time Zone Clock is a useful mechanism for telling the time in a variety of rooms or settings. 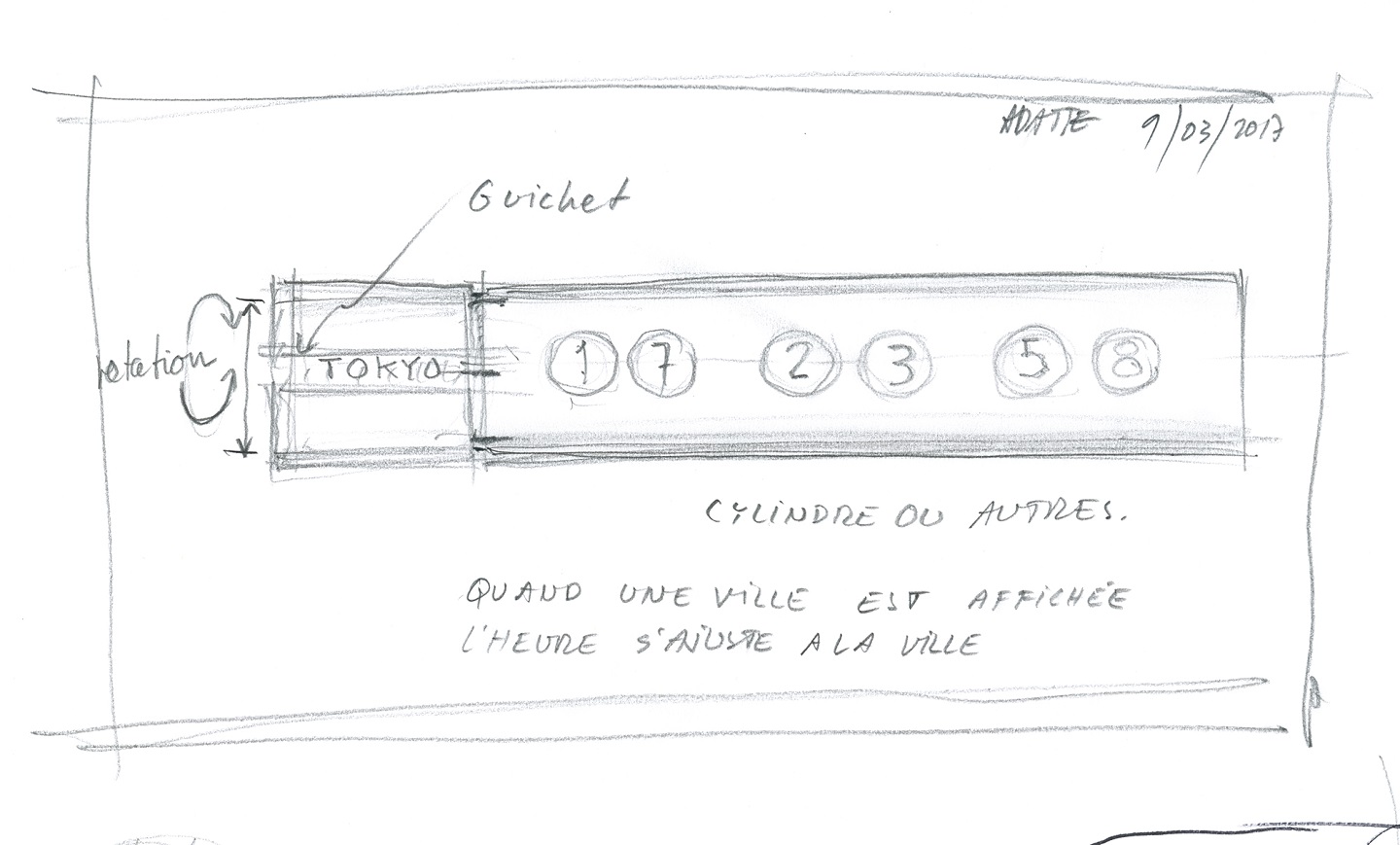 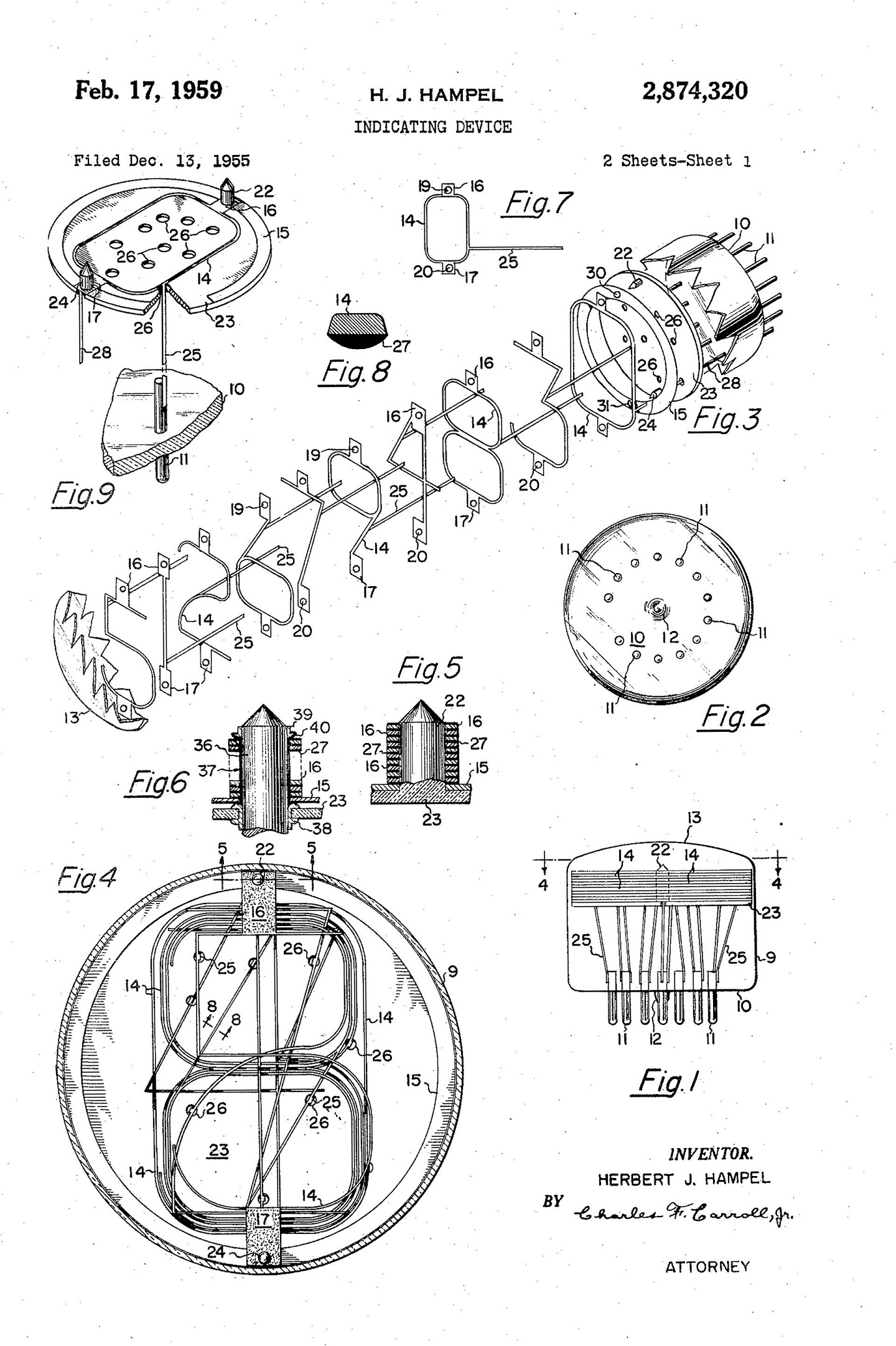 Conceptually, the Nixie Time Zone Clock is a merger of mechanical art, modern design, retro-revivalism, and luxury execution. Adatte Design has spent a number of years first conceiving the Nixie Time Zone Clock, but also perfecting its design and form for enthusiasts and design aficionados. None of this could have been done without the core component of the machine being available. That being the precious Nixie tubes themselves. Adatte Design was fortunate enough to acquire a cache of new-old-stock East Germany-era Nixie tubes. Produced by hand, a large number of Nixie tubes were produced in the Soviet Union as a digital information indicator. In essence, Nixie tubes are early digital display technology – a relative of the LED (light emitting diode). Nixie tubes were replaced by technology such as cathode ray tubes (CRT) monitors. Such displays had programmable areas whereas Nixie tubes used static elements to display a range of numbers (such as between 0 and 9) or symbols inside of a small tube. In some ways, these were fancy bulbs.

Nixie tubes were so heavily used for industrial and military purposes that they were produced all over the Soviet Union in large supply because they believed such tubes would be needed for decades to come. After the fall of the Soviet Union, and the decommissioning of last-generation factories, industrial buildings, and things like submarines — Nixie tubes became obsolete technology. The precious nature of their hand-made construction, and the beautiful result of their glowing displays, prompted people in the post-Soviet world to hold on to the unused Nixie tubes for some unknown future purpose. Perhaps the very people who protected unused Nixie tubes in the first place from being destroyed imagined that someday that would be used in high-design luxury items given their bright appeal. 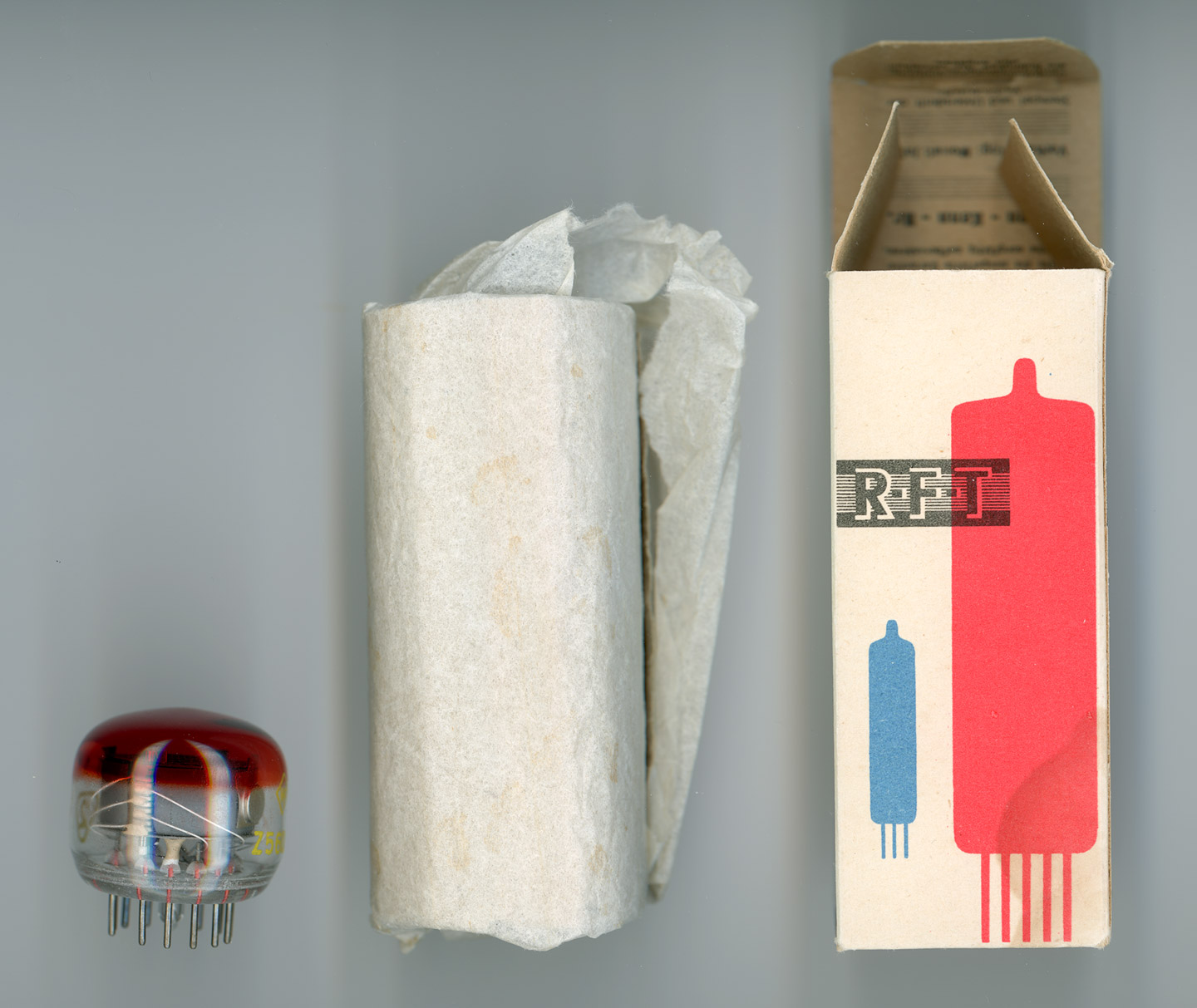 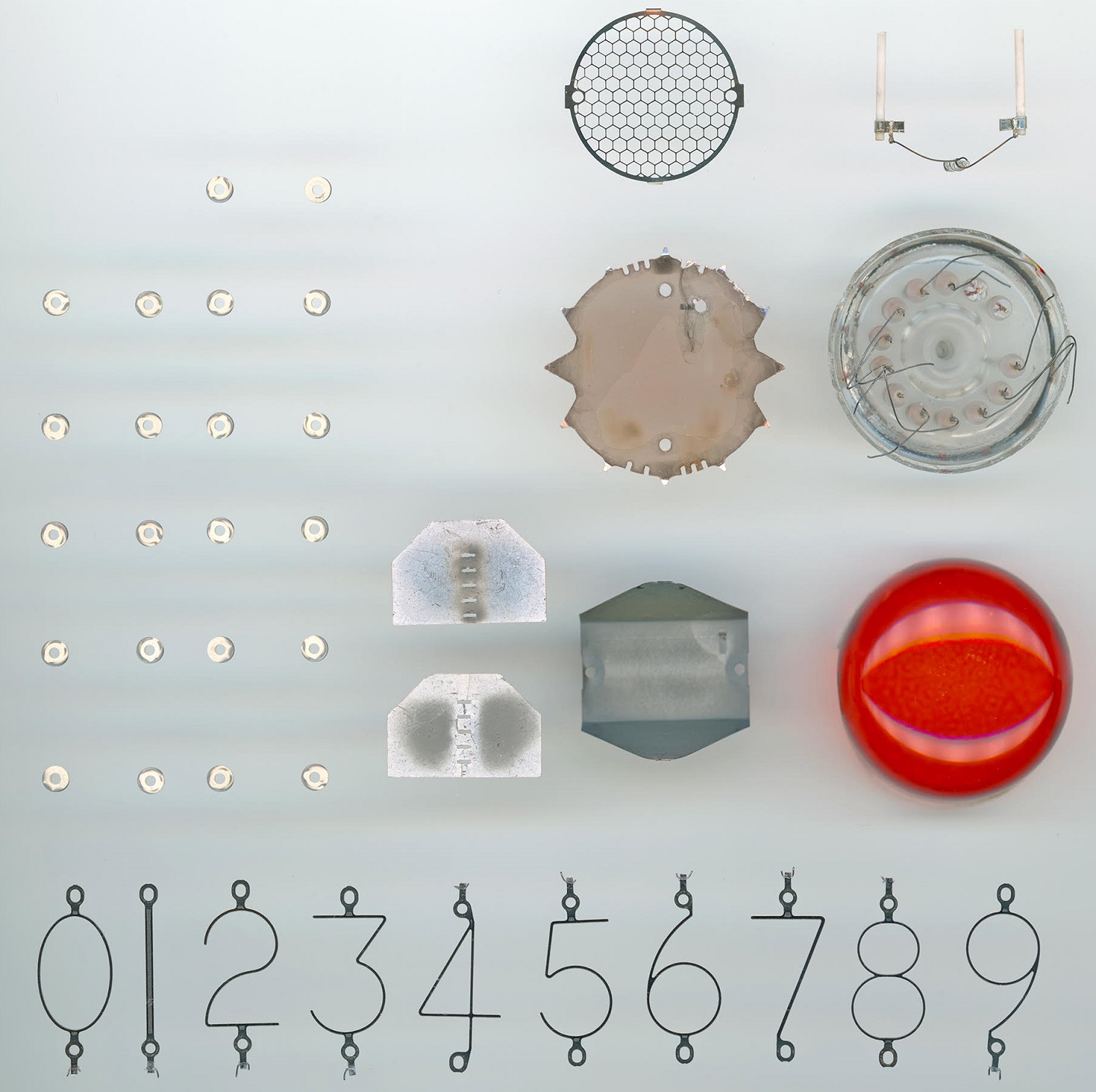 Nixie tubes have a burn life of nearly 20 years. which means that, unlike traditional incandescent bulbs, they last for a very long time. The Nixie Time Zone Clock is produced from precision-machined aluminum and brass, then finished by hand from different ateliers across Cantons of Jura and Vaud in Switzerland. These are many of the very same artisans who manufacture components for mostly highly-regarded watch brands. The metal is PVD-coated for the coloring treatments. Each of the screws is steel. The tube-shaped clock is 330mm-wide and 80mm-thick. The entire assembly weighs four and a half kilograms. The Nixie Time Zone Clocks are further produced as a limited edition of 100 pieces total and exist at a contemporary interaction of art, instrumentation, and mechanical sculpture. The units are hand-assembled and produced in Switzerland. Price is 9,500 Swiss Francs ($10,320 USD). They can be purchased online from the MB&F MAD or here directly from Adatte Design.

To learn more about the design and the backstory of the Nixie Time Zone Clock, aBlogtoWatch presents an interview with Mr. Jeremia Adatte from Adatte Design:

aBlogtoWatch: Nixie tubes are a now exotic early form of digital numeric display. Used mainly for industrial purposes in parts of Eastern Europe and the Soviet Union. Tell us a little bit more about these interesting pieces of now-vintage technology, how you fell in love with them, and where you managed to acquire some for a very special product you’ve now spent years working on.

Jeremia Adatte: You are correct for Eastern Europe and the Soviet Union, but it was first widely used in the USA, thanks to Burroughs Corporation who is known to be the first manufacturer of the Nixie Indicator tube. In 1955, the US patent N° 2,874,320 was filled by inventor Herbert J. Hampel and used by Burroughs.

As a collector, I eventually stumbled upon old Philips ZM1040 Nixie tubes in Switzerland, and from there, my interest began in this incredible product. One day, it was by pure luck that I found so many pieces in one shot, a huge stock of only new-old-stock pieces from which a small percentage is used to ensure the after-sales service for our customers for many years to come. According to the original manufacturer information, the tubes can last for more than 20 years in constant operation and even more on our clock, as we designed a program that extends their lifespan. In 2008, we designed and produced a simple clock using 6 Nixie tubes. It has been running 24/7 since 2008 and, after 13 years, the tubes are still glowing as brightly as on the very first day. 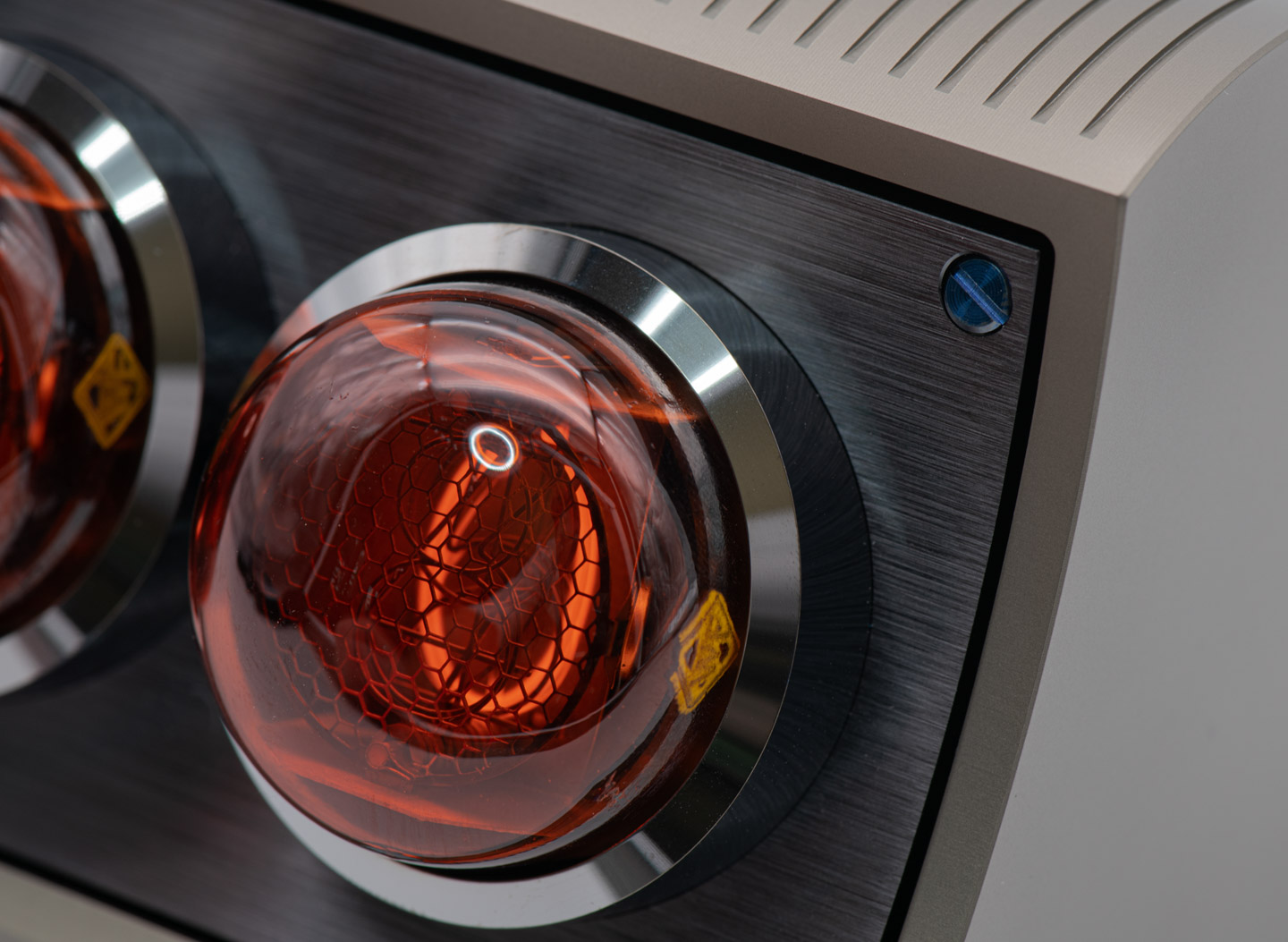 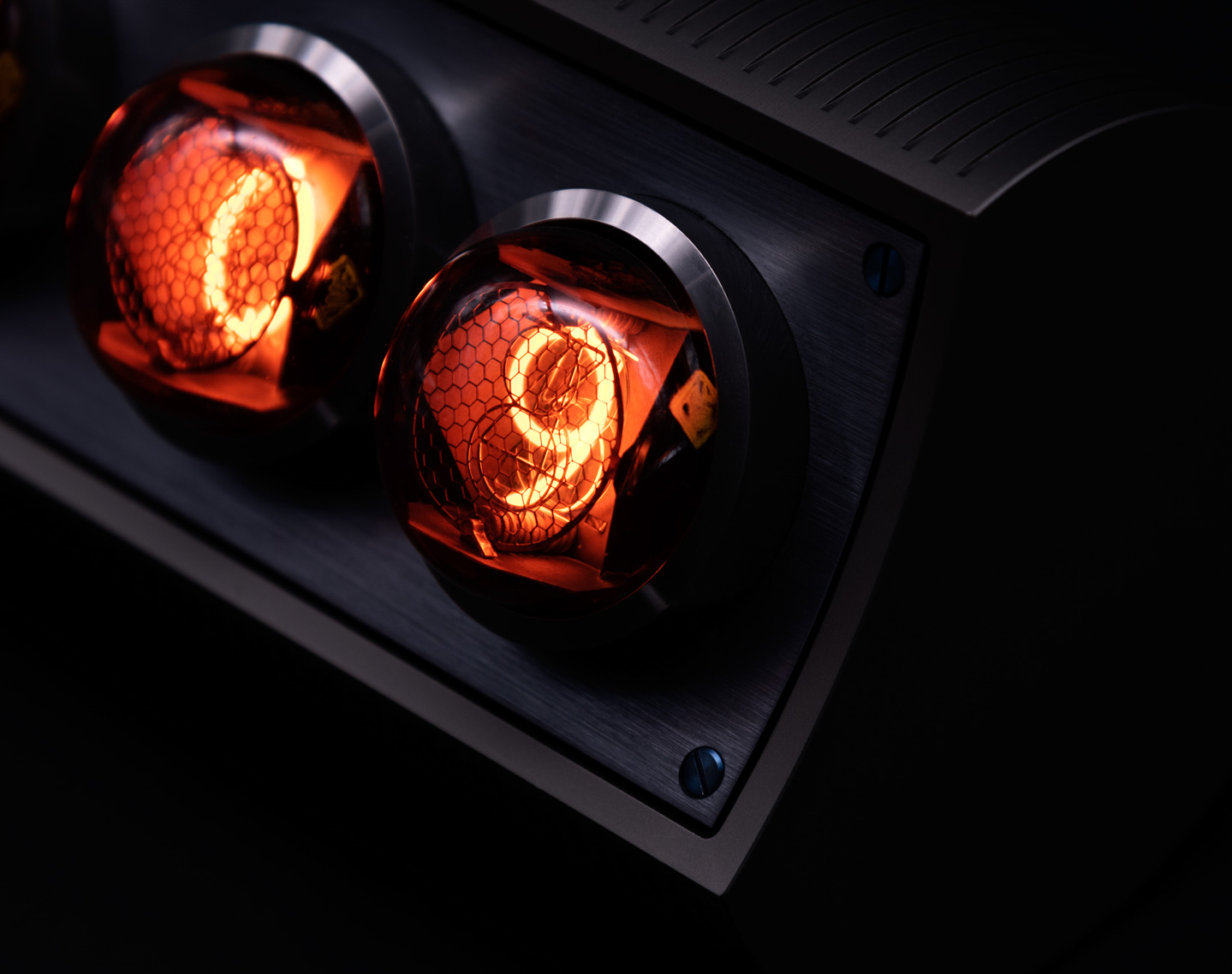 aBlogtoWatch: The Nixie Time Zone Clock is a device you’ve spent more than a decade working on. What is the origin story of this clock and how did you come up with this design?

Jeremia Adatte: That started with this large stock we found. In the first place, we didn’t really know what we wanted to do with it. But after weeks of many studies, brainstorming, and sketches, we selected an idea that evolved to the Nixie Time Zone Clock as you see it here today. We gave our design team the goal to make a kinetic art sculpture that tells the time around the world.

Our friend, the most prolific watch designer Eric Giroud, told me I needed to widely present this clock. So, Eric introduced me to MB&F / M.A.D.Gallery. It was an immediate wow effect for the whole team there in Geneva. The entire first 100 units from our different retailers and our personal stock sold out in well under a year. 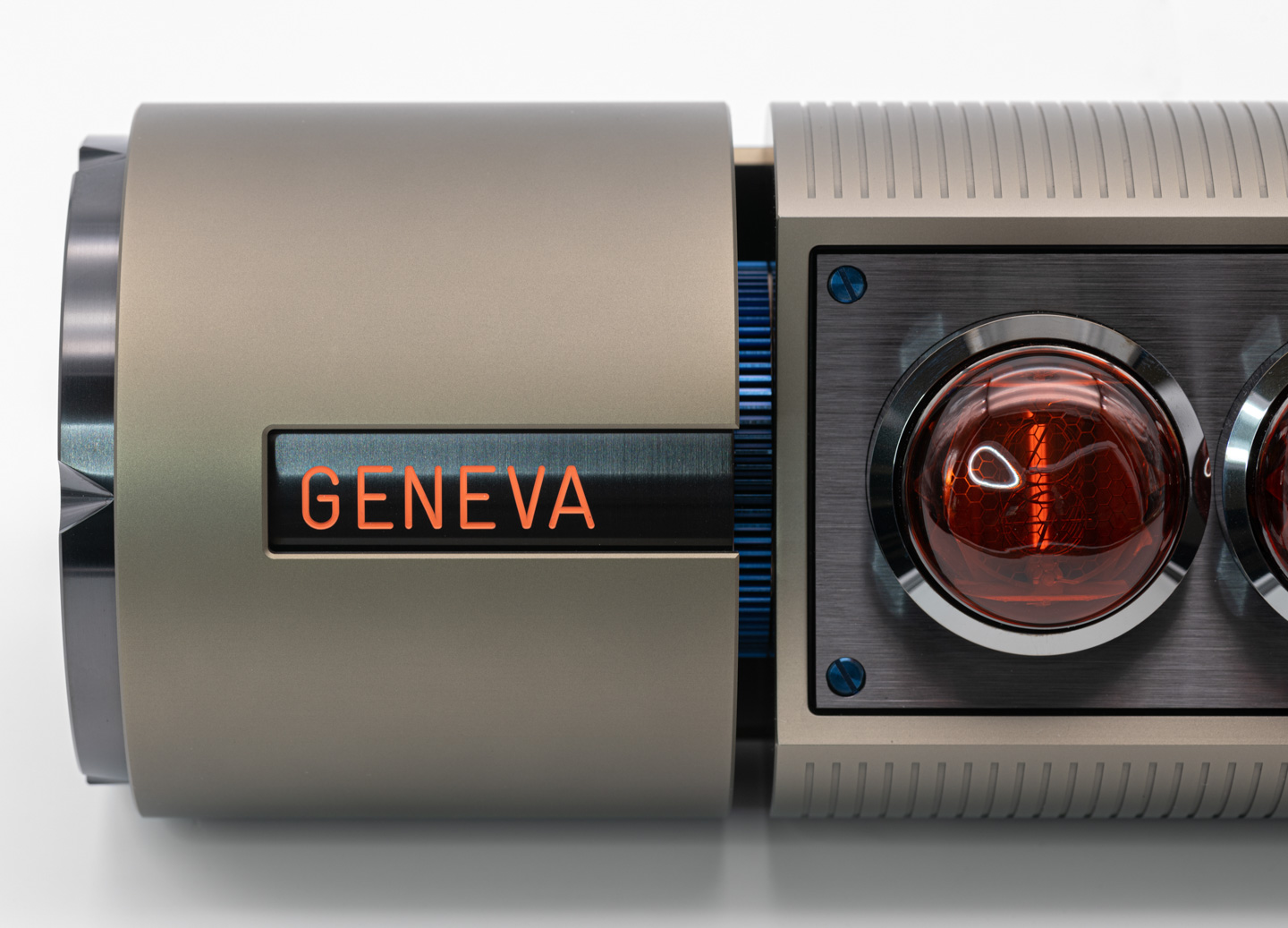 aBlogtoWatch: What does the 55 Nixie Time Zone Clock do, and what kind of manufacturing process is required to create it?

Jeremia Adatte: A rotating mechanism shows time though an aperture for five different countries successively, displayed on six new-old-stock Nixie tubes, reveals the date at the push of a button, and has three different animation modes (in constant rotation, or still). This clock also offers the unique  possibility for the customer to choose different cities (or names) other than the ones engraved (which are Geneva, Dubai, Taipei, New York, London) and create a personal link with the object for even stronger ownership.

We have chosen the best artisans from the watchmaking world to manufacture our components. A lot of steps are required, and all the components are finished by hand, including the rotating cylinder on the left, which has all the engravings filled with orange enamel paint that is applied by hand, letter by letter. Most of the components are treated in PVD (Physical Vapor Deposition) in three colors: light grey, dark gray, and deep blue. PVD is a high-end coating used for luxury watch components, medical tools, and aerospace technology. The body milled from solid aluminum, is anodized in a unique bronze grey color we specially formulated just for the clock. 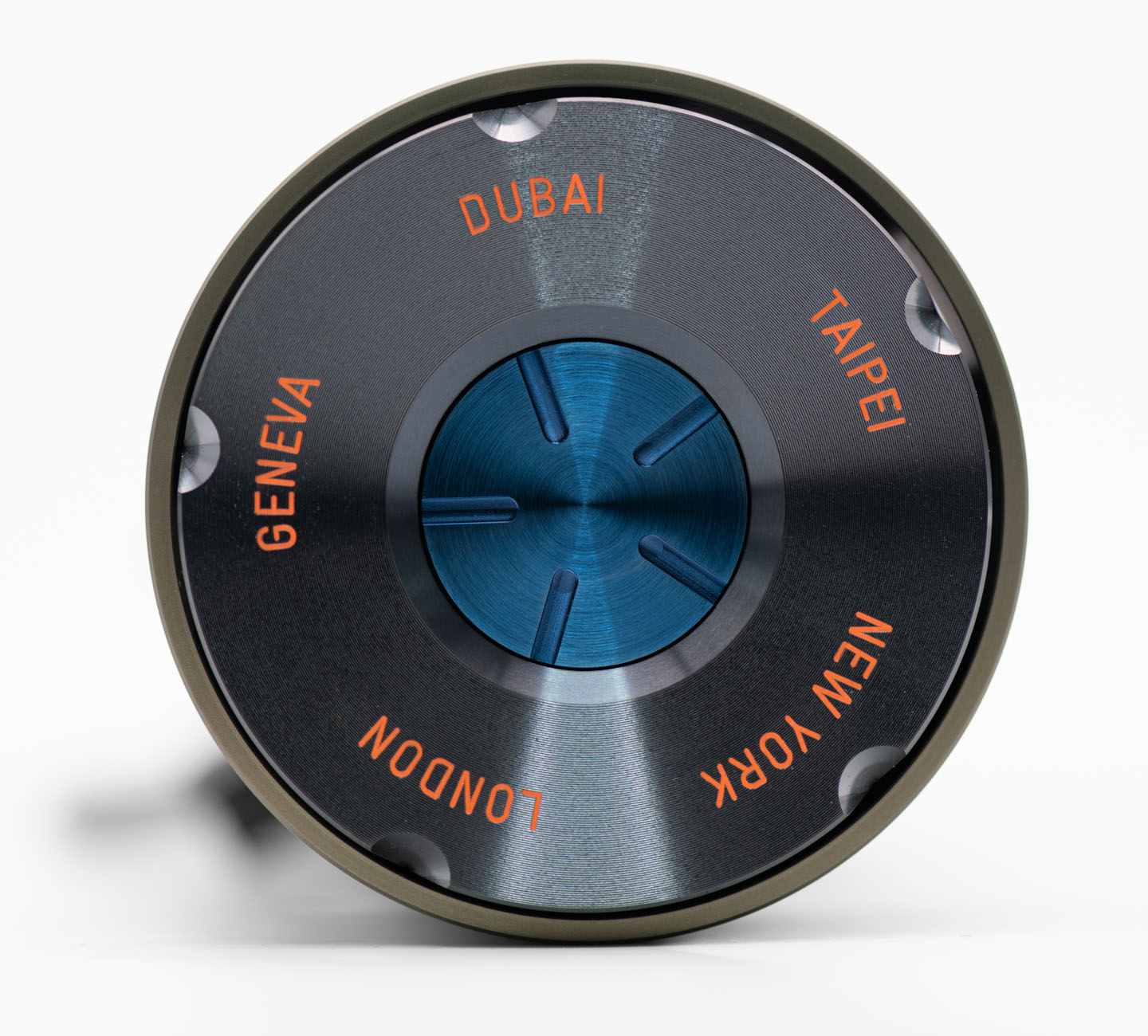 aBlogtoWatch: How much longer do you think people will be able to find Nixie tubes for industrial art projects such as the 55 Nixie Time Zone Clock. Since no more tubes are being produced today, is someone out there trying to relaunch manufacturing for the tubes?

Jeremia Adatte: I think in less than five years, or so, it won’t be possible to find these kinds of products anymore, especially in NOS (new-old-stock) condition. We probably found the last dead stocks on the market still available at that moment.

aBlogtoWatch: What types of skills and lessons did you gain during the development of the Nixie Time Zone Clock?

Jeremia Adatte: Every project enriches our knowledge more across a wide variety of fields — that’a why this job is so interesting. There are always challenges for us at Adatte Design. What guides us for every single project is the 3-C rule : Commander – Contrôler – Corriger (in English : manage – check – correct) in order to maintain the highest quality-level for all of our products. 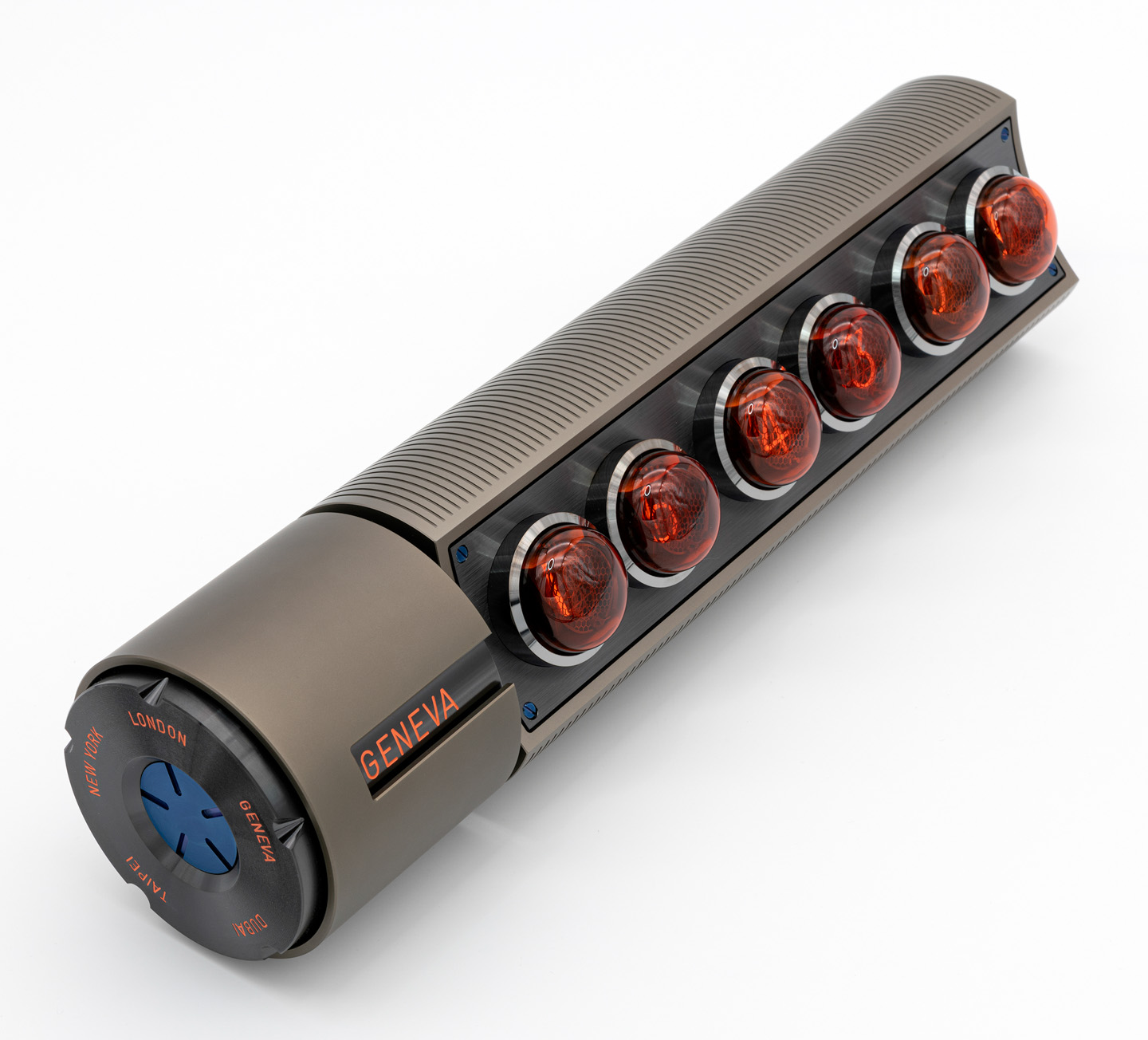 aBlogtoWatch: How many products like this, are there on the market? You clearly designed something original, but is the Nixie Tube Clock unique?

There is simply no other product like our Nixie Time Zone Clock.