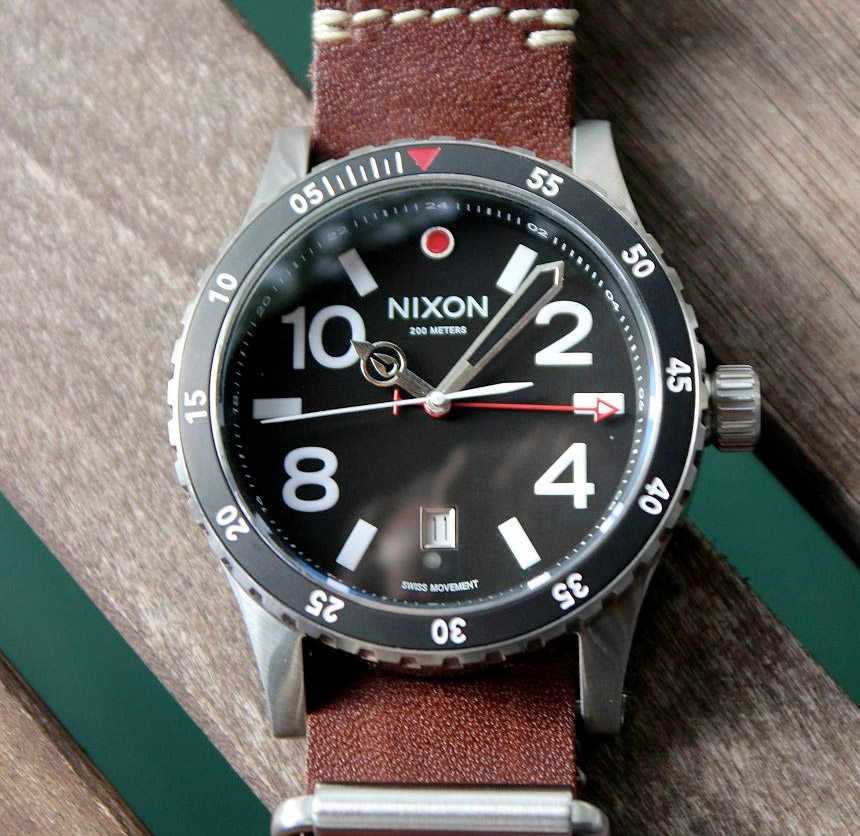 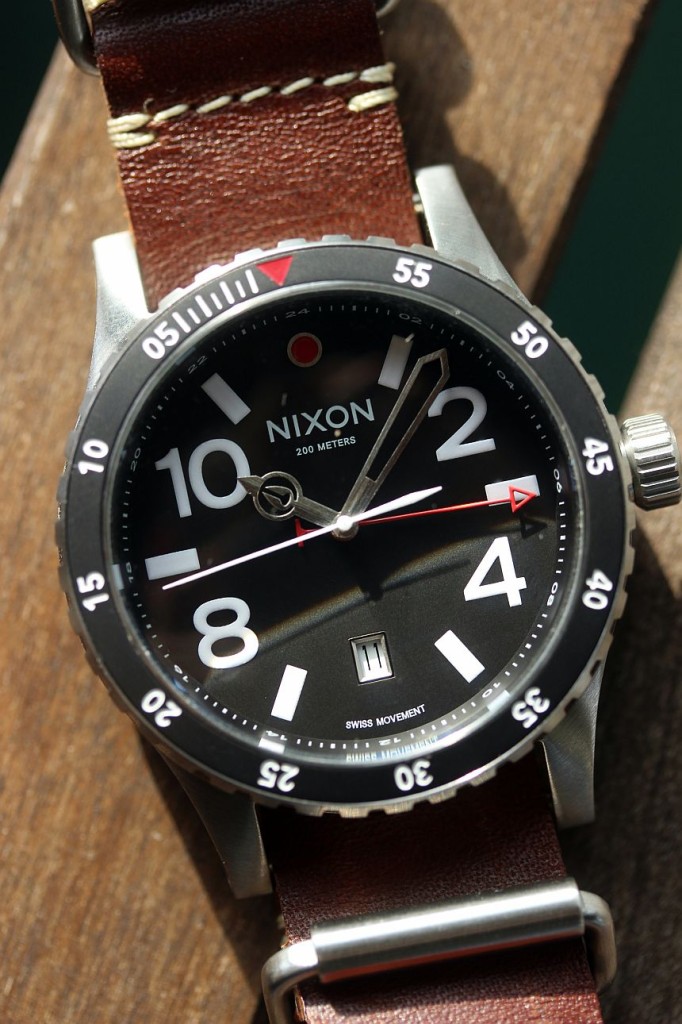 Nixon isn’t a brand that I’ve had too much exposure to in the past. However, once I saw that they had a model featuring a Horween leather strap, I knew this was definitely a model that I needed to check out. Of course it didn’t hurt that the piece also featured a GMT function, which is one of my favorite complications. I have to say though that the first thing that grabbed me about this watch wasn’t so much the specs, or the strap material – it was the name.

At least here in the states, the Nixon name (when it comes to politics, not watches) is about as opposite from a diplomat as you could think (if you’re not sure what I’m talking about, check out this article). Here, I think Nixon (the brand) may be playing on that tension somewhat to make the piece interesting. And I guess it worked, because here we are reviewing the watch. 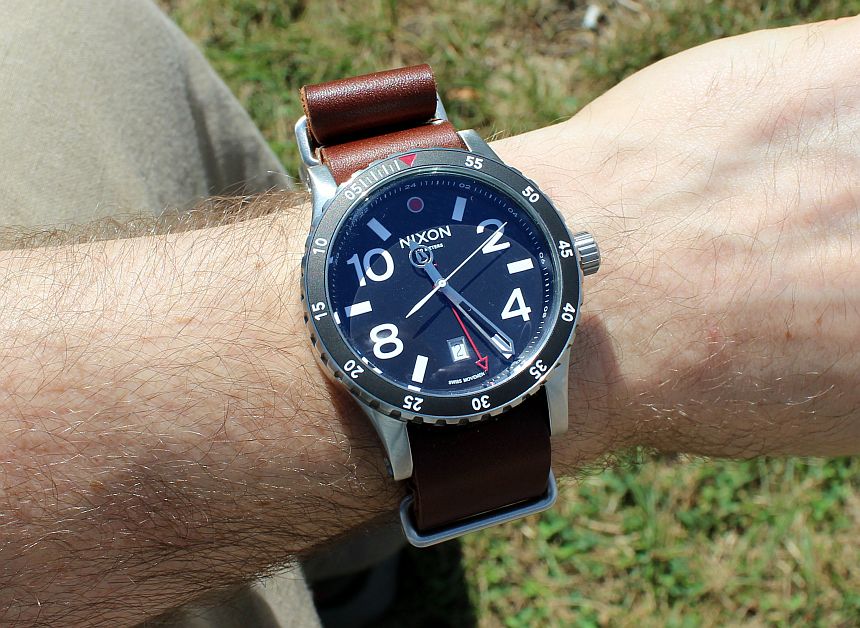 On to the watch! This is, by modern sensibilities, a larger watch, just on the cusp of what I consider to be comfortably wearable. The stainless steel case comes in at 45mm in diameter. While it’s not as thick as some divers I’ve recently reviewed, it’s not the thinnest of watches either. The domed mineral crystal (AR coated on the underside) also contributes to this height as well. It wasn’t a problem slipping it under a cuff, but it can be a snugger fit. The watch comes in at a weight of only 126g, so this isn’t one that you’ll feel weighed down with.

Inside that case, you’ve got a quartz Ronda movement driving the four hands (hours, minutes, seconds, and GMT) as well as the date display. This is all read out on a cleanly laid out dial. While the use of numerals is sparing, where they do appear, they are nice and large (indices are just slightly smaller). This keeps a clean appearance, while allowing for easy readability. 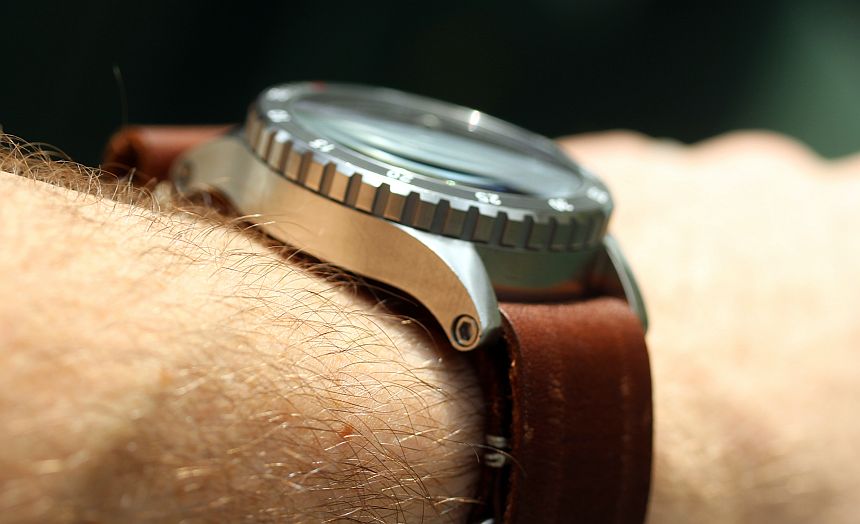 Unfortunately, the handset is not as easy to pick up as the dial. If you’re in a relatively bright environment, the polished (and partially skeletonized hands) are easy to see, as they reflect light nicely. If you’re in a darker room however, it can be a bit tricky to angle your wrist just right. And in complete dark? Just you never mind – though the dial has lume on it, the main hands have none. Which to me seems an odd oversight. I’m OK with non-lumed hands on dressier pieces, but the Diplomat definitely presents as a more casual or sporty piece. Of course, we don’t live in utter darkness (well, unless you’re in the land of the midnight sun), so it’s not like the hands are a deal-breaker for most. In Nixon’s defense we see this partial-lume abnormality from other major brands. We don’t like it, but it isn’t totally unheard of.

In contrast to the main handset, I do really like the seconds and red GMT hands. I really like slender seconds hands that reach out to the outer edge of the dial, and this one has a slight flair on the balance end, making for a sharp design. In some ways, it’s almost a hand destined for a dressier piece – which makes me wonder if the main handset was different in the initial designs for this watch. Confusingly, it’s also the only hand that has any lume – which makes the lack of lume on the main handset that much more of a surprise. As to the GMT hand, it’s also slender and unobtrusive, meaning you really only pick up on it when you’re wanting to read the second time zone. This is done by a quick tilt of the wrist so you can see the 24-hour scale printed on the rehaut – small, but legible. 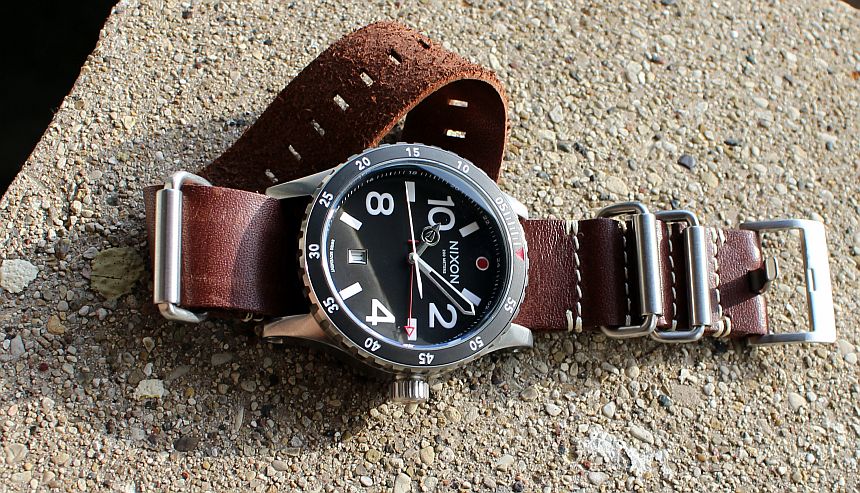