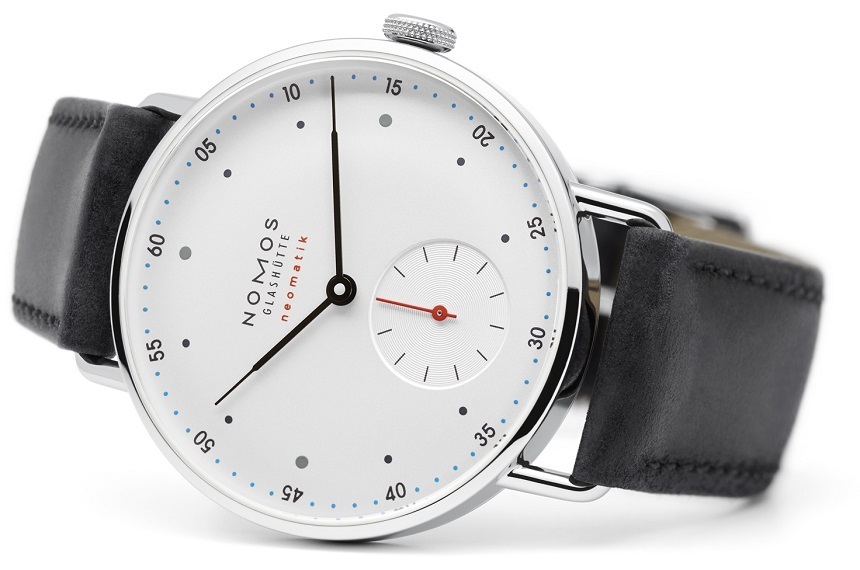 The Nomos Metro Neomatik watch – my favourite model from the newly launched Nomos Neomatik collection – is a timepiece that stands a chance of weathering the cyclical shifts in fashion well. Enduring style has always been hard to find. When we look to the past for inspiration, it seems as if the early part of the 20th century was awash with exclusively stylish men, women, and artefacts. But that’s us viewing history through rose-tinted glasses. We see only what endured, and it’s nice to see that modern designers are embracing classic shapes and styles rather than eschewing them in favour of rampant radicalism. 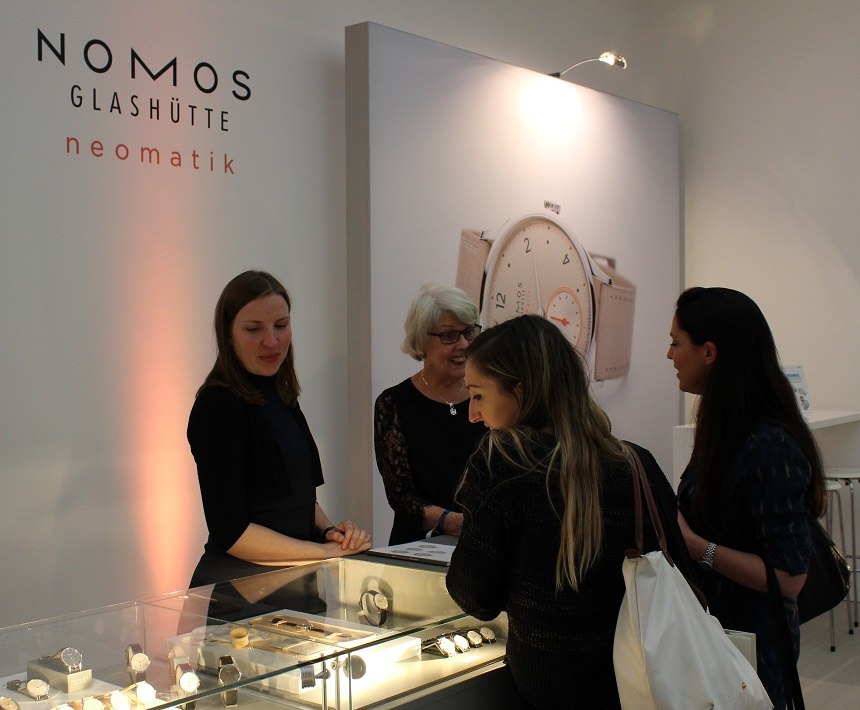 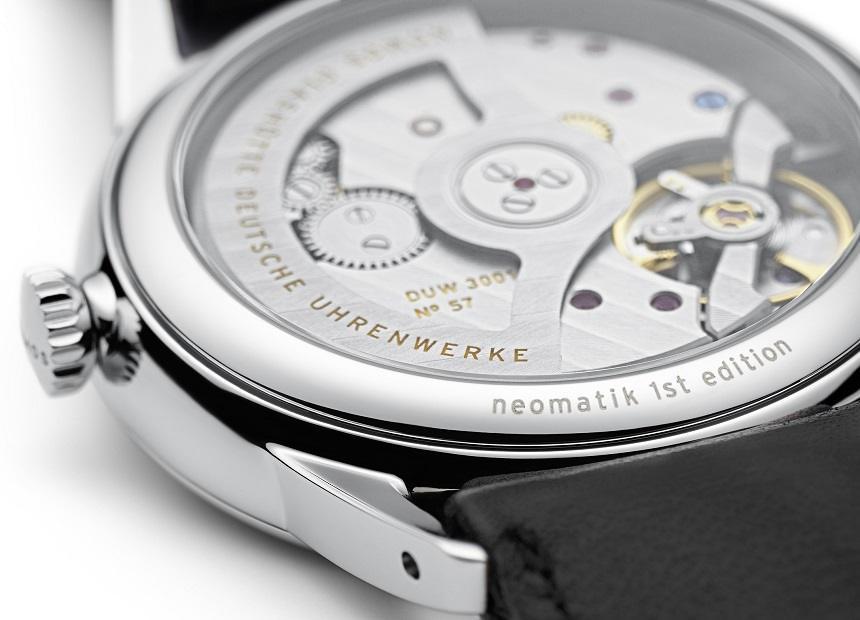 Case back shot of Neomatik Orion used to illustrate the movement from this angle.

This watch is so German, I’m kind of surprised it doesn’t come with a complimentary bratwurst (a pity). The cleanness of the dial is exquisite. Nomos is a member of the Deutscher Werkbund, which is a precursor to Bauhaus. Although the two are often confused internationally, their similarities make such an error forgivable. This kind of style never went out of fashion, but it did exist in the shadows for quite some time. Nomos has always been a minimalistic brand, but this new wave of watches draws heavily and honestly on quintessentially Germanic design principles – and is all the better for it. 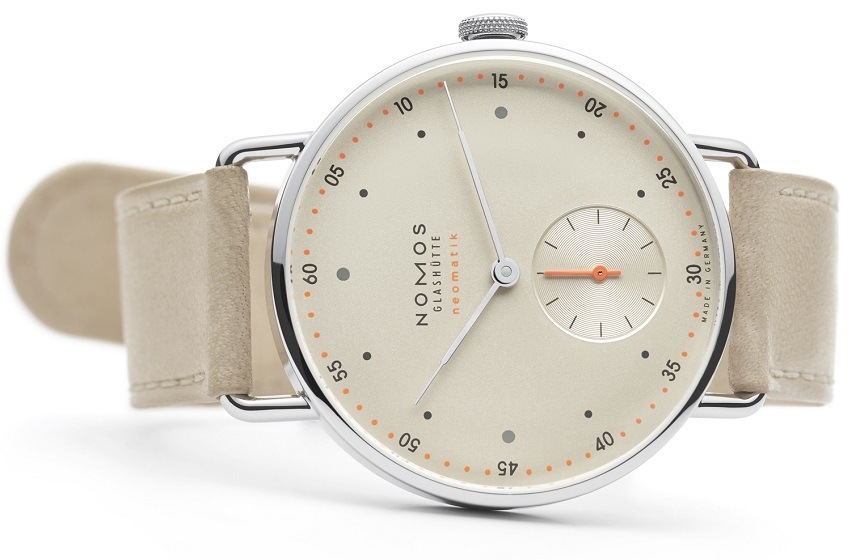 The Nomos Metro Neomatik features the new Nomos in-house automatic calibre. Impressively, the automatic movement is only marginally thicker than its hand-wound predecessor. At 3.2mm thick, the in-house Nomos DUW 3001 is a real boon for this small independent brand. The calibre is not going to blow anyone away with its technical specifications, but it can carry a variety of dial-side complications and is excellently made. 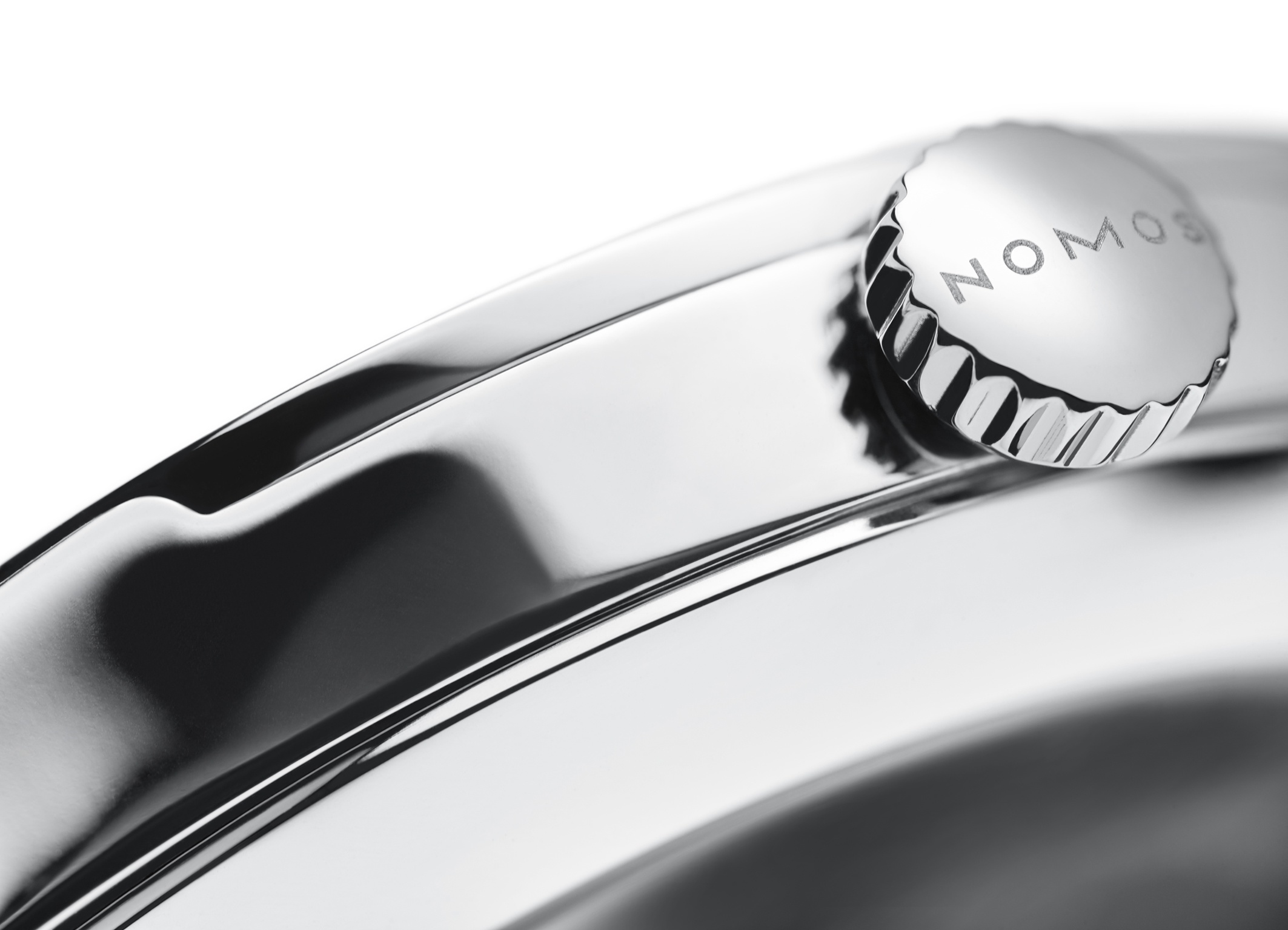 It took Nomos three years to develop the DUW 3001. Although a small movement, the DUW 3001 required broad shoulders to carry the weight of expectation placed on it from the drawing board to realisation. Nomos needed their new calibre to function at a chronometer standard, retain their slim-line aesthetic, and be cost-effective enough to keep their retail prices from sky-rocketing. That’s a lot to ask of one little movement. But the DUW 3001 answers the call on all three fronts with aplomb.

Despite its slenderness, the Nomos DUW 3001 used in the Nomos Metro Neomatik has a look of quality about it. This is the tenth in-house movement produced by Nomos, and their growing experience shows. It looks tougher than its slimness suggests, but that probably has something to do with the solidity of construction and the way in which space has been used efficiently. The entire gear train sits between the mainplate and the three-quarter bridge – that’s just 1mm of clearance. Slimming down the parts, leaning on new materials, and cramming as much “know-how” into the DUW 3001 has resulted in one of the thinnest production chronometer calibres in the world. 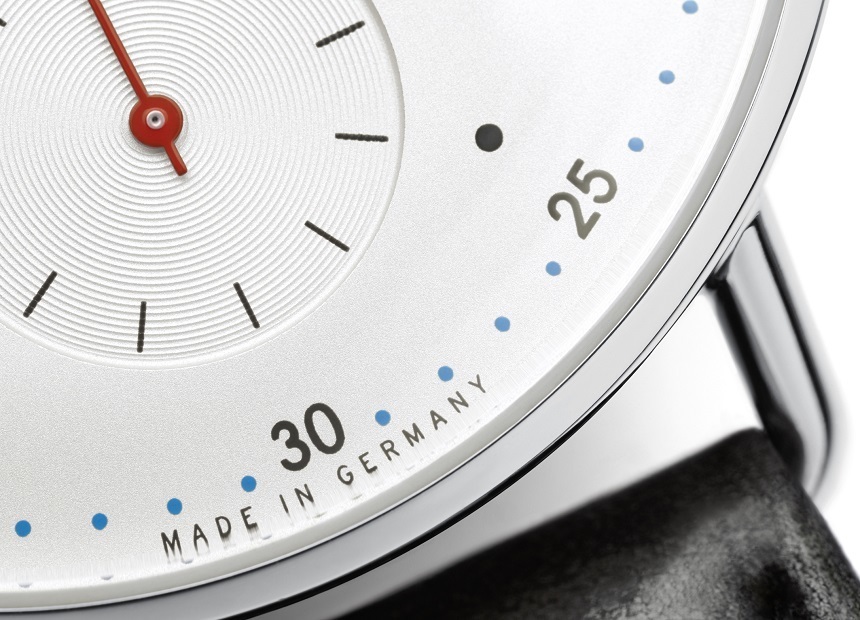 And this is more than just an upgrade from their previous in-house automatic movement, the Eplison. Nomos decided to turn their considerable experience in the design and manufacture of slim watches towards the creation of a self-winding calibre that adds just 0.3mm to the thickness of the Tangente (hands-on Tangente review and more on the DUW 3001 movement here) case when compared to the old model that featured the hand-wound Alpha calibre. By using that particular model as an example, we can clearly see the success of Nomos’s endeavour – just 0.3mm to step up from a manual to an automatic. 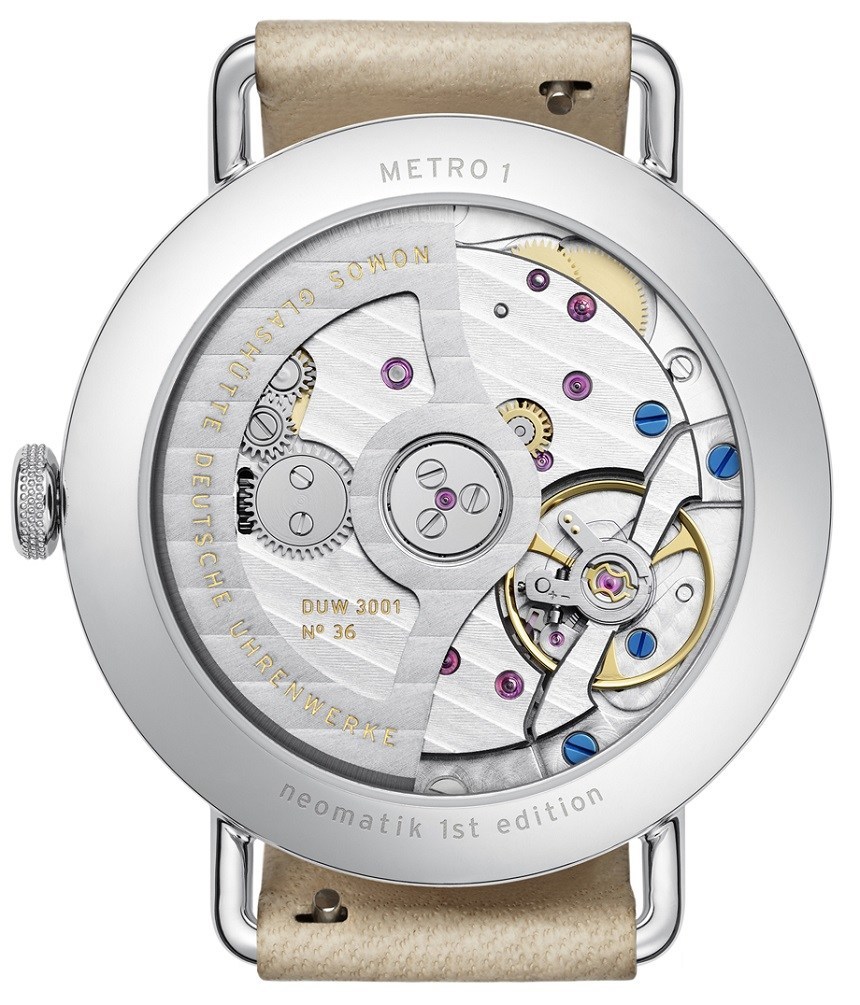 But how did they do it? Well, the simple answer is they made everything flatter, but what that means in practical terms is they had to slash their manufacturing tolerances in half. Every component of the movement had to be evaluated for thickness and integrity. Profiles and angles were altered to reduce the stress on the ever-thinner components. As nightmarishly finicky as this whole process was, the result is not only slimmer than its predecessor, but significantly more efficient (in some areas of analysis, as much as 94% more efficient). 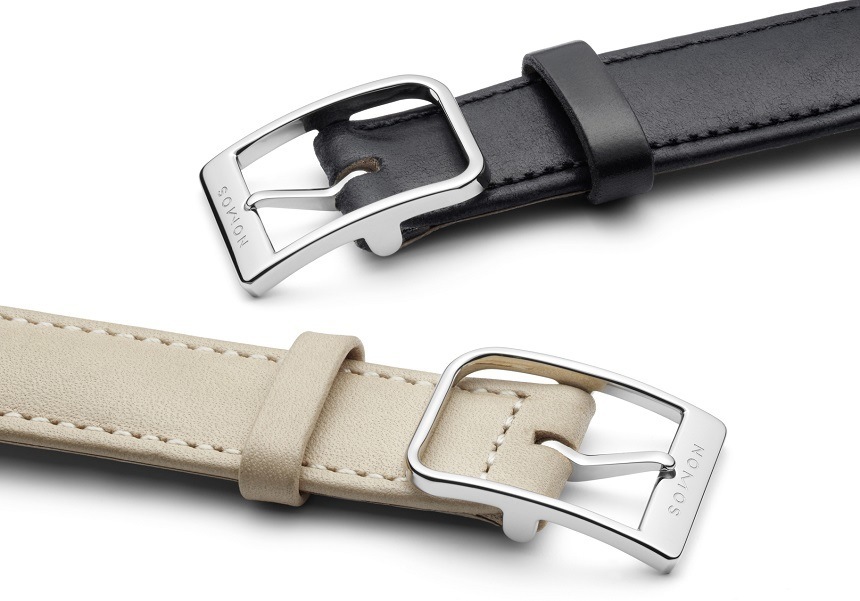 The size of the 35mm case is suitable for both men and women, and fits neatly under the cuff of a shirt. On the other hand, I can think of more than just a couple of men who would refuse to wear a 36mm watch, let alone 35mm. Those among us aside, this is a super-smart watch; its laid-back confidence makes it suitable for casual outfits too. It’s cool, it’s fresh, and it comes in two colour schemes – either classic black, with red and blue colouring on the white, silver-plated dials, or a modern champagne/neon orange colourway. Now, those two colours may not immediately ring your bell, but they do provide an interesting contrast that definitely grew on me. The watch is water resistant to 30 metres and comes on a 17mm cordovan leather strap with steel pin buckle. 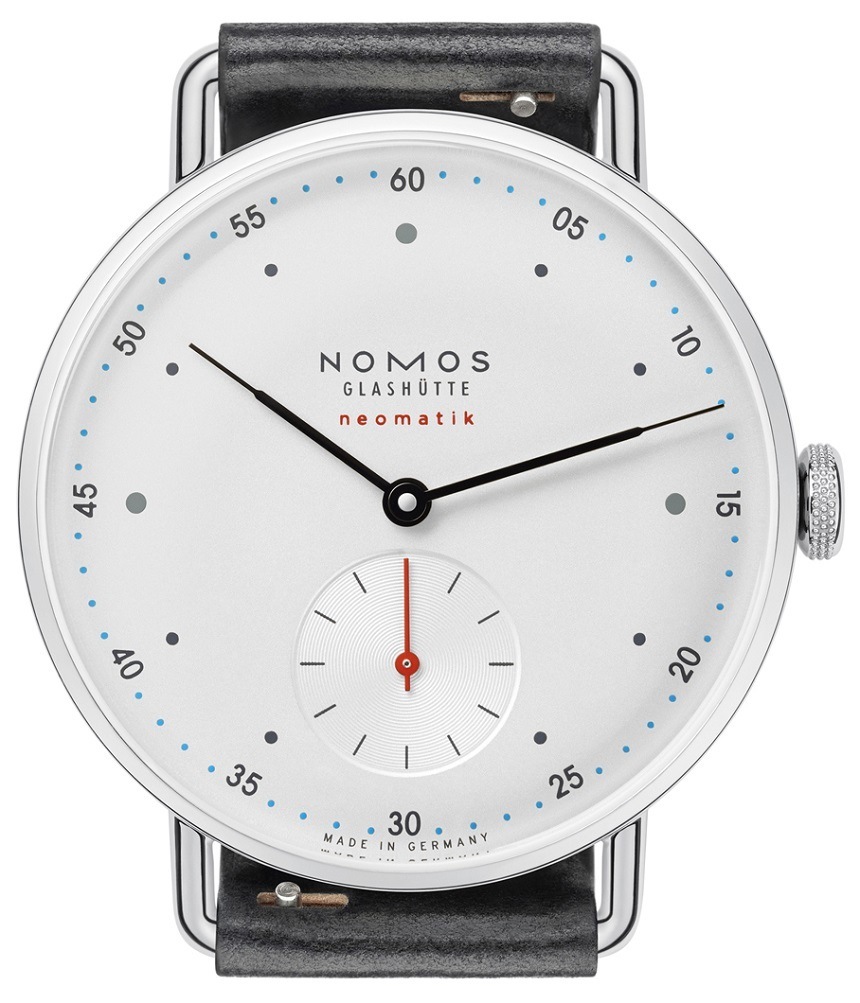 I was able to test drive the Nomos Metro Neomatik with the silver/blue/red dial at SalonQP 2015. I spend a lot of time talking to people in and around the watch industry, and I’ve been hard-pressed to find anyone who has a bad word to say about Nomos. This is particularly unusual for an industry that generates incredibly impassioned opinions in creators and consumers. What I get when I raise the Nomos name in conversation, is an almost universal nod of approval – they are cool, consistent, classy, credible, and cost a lot less than one might expect for a product that is so in-house it features its own escapement, known as the Nomos Swing System. The Nomos Metro Neomatik and the whole Neomatik collection (five models in two colours), is available worldwide. The price for the Nomos Metro Neomatik will be £2,420 for the black version, and £2,480 for the champagne. nomos-glashutte.com