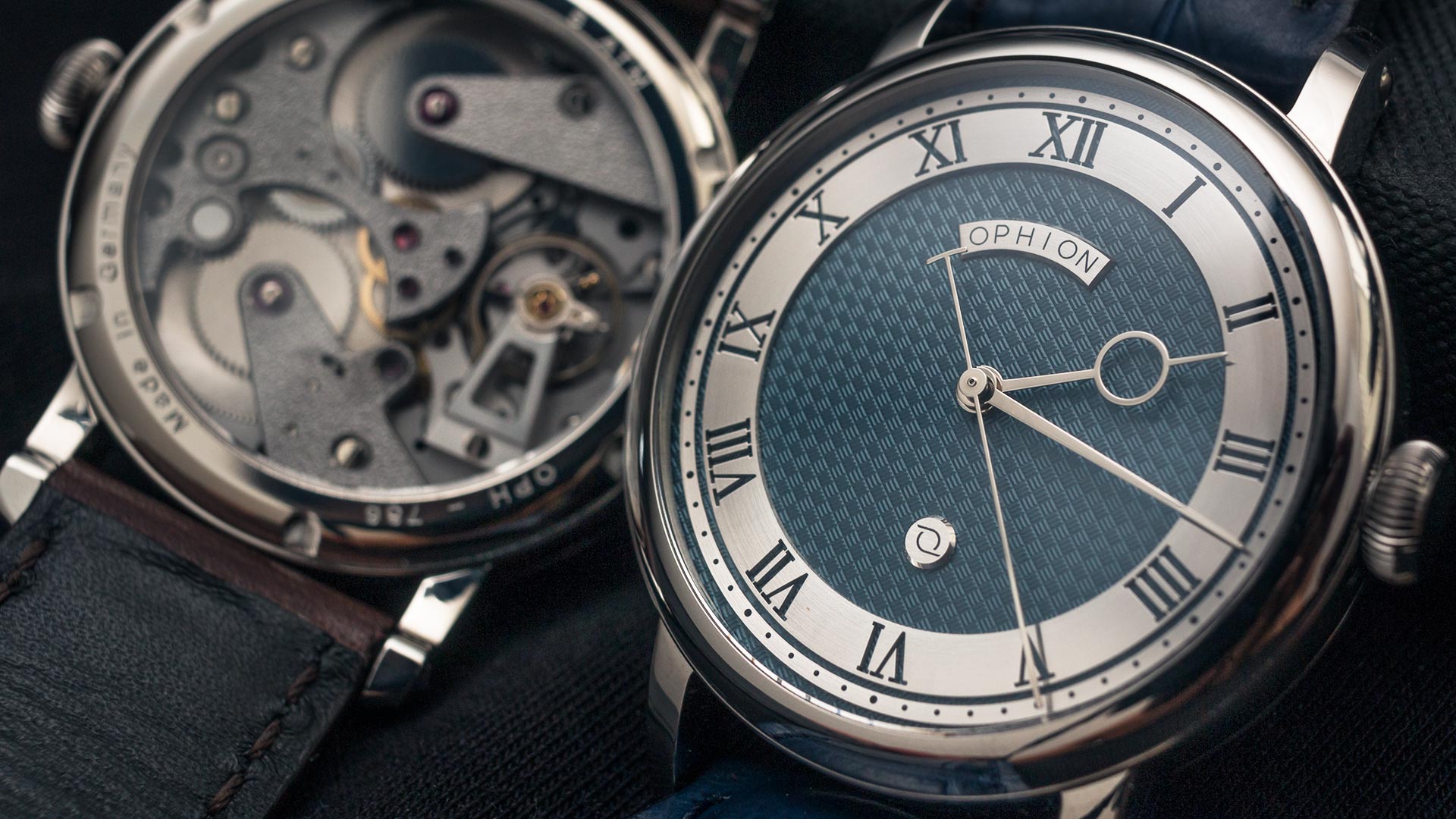 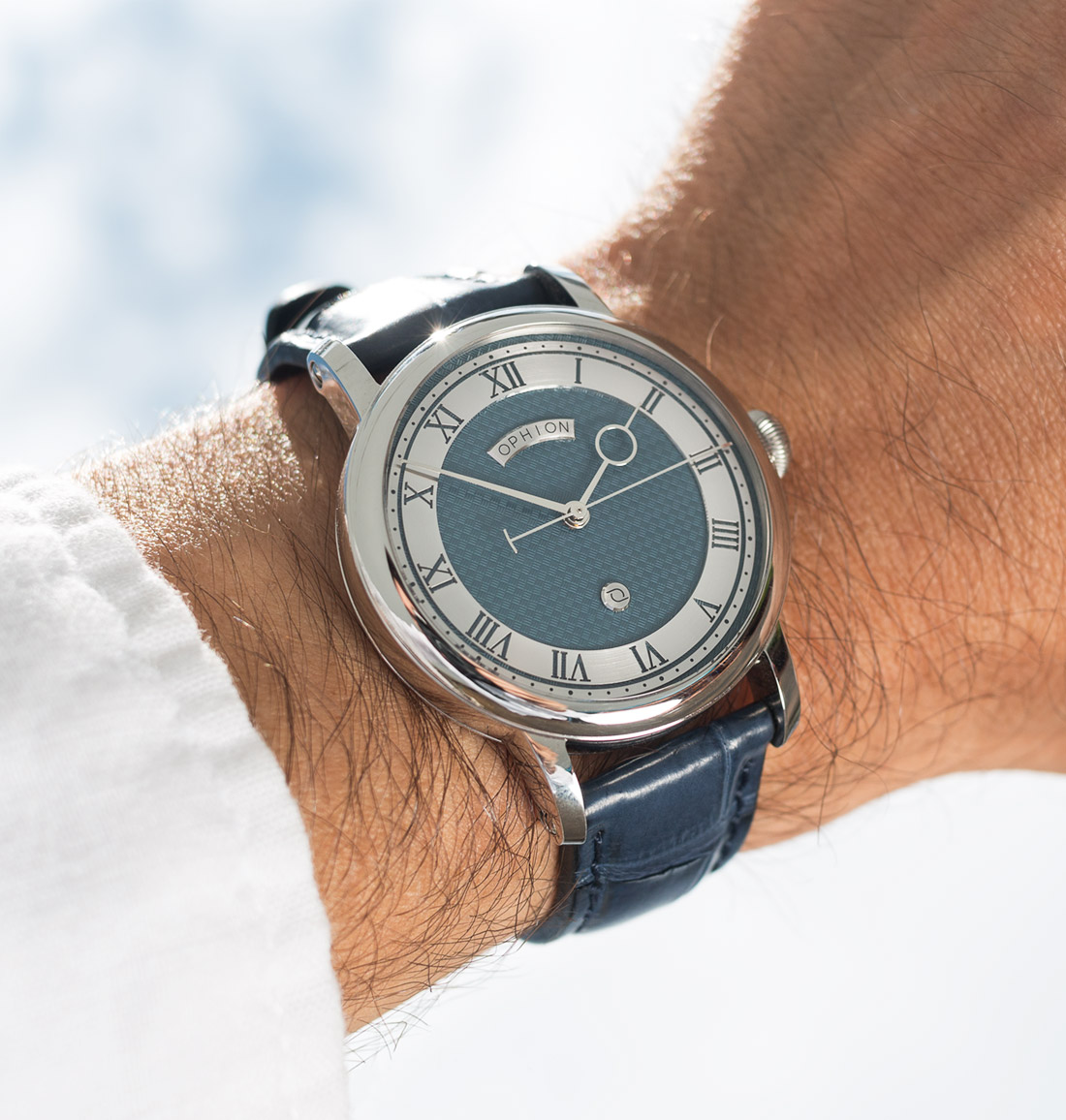 What should you expect from a watch for around $2,000? An increasing number of small, independent brands are demonstrating value propositions that established brands will have a hard time competing with, and Ophion is one of the best recent examples. The Ophion OPH 786 uses traditional watch design elements based on early pocket watches and applies this concept in a surprisingly well-rounded and integrated way from its guilloche dials to the movement design and finishing. The challenge in this review is cramming in all the superb little details that deserve to be pointed out without personal excitement leading to just a jumble of exclamation points. Don’t mind me and my unbridled enthusiasm—by all means, take a look at the Ophion OPH 786 and judge for yourself. 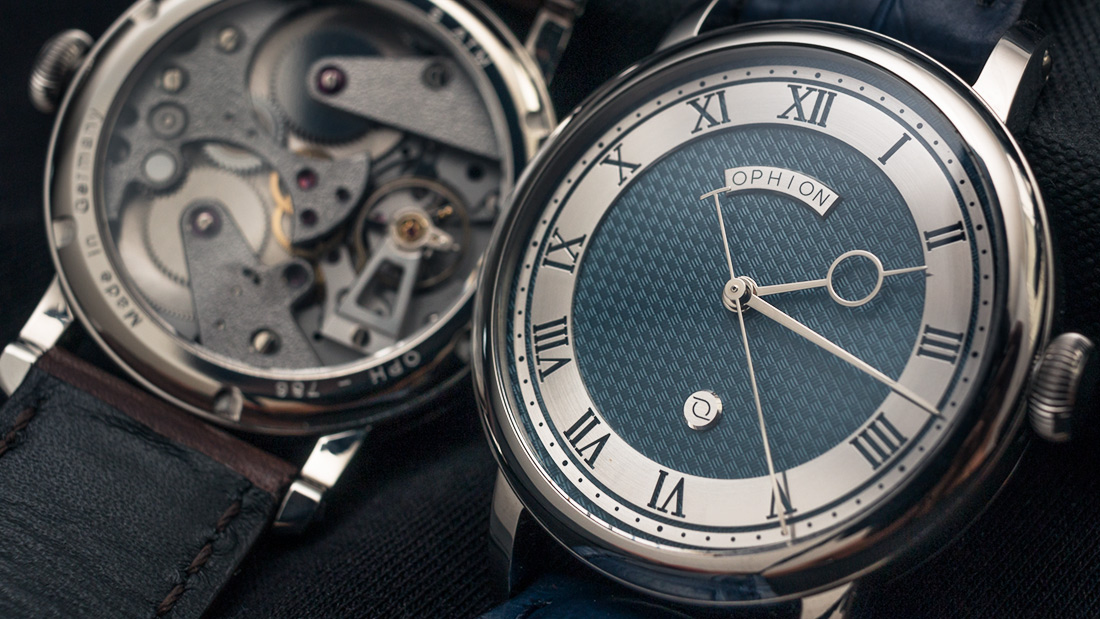 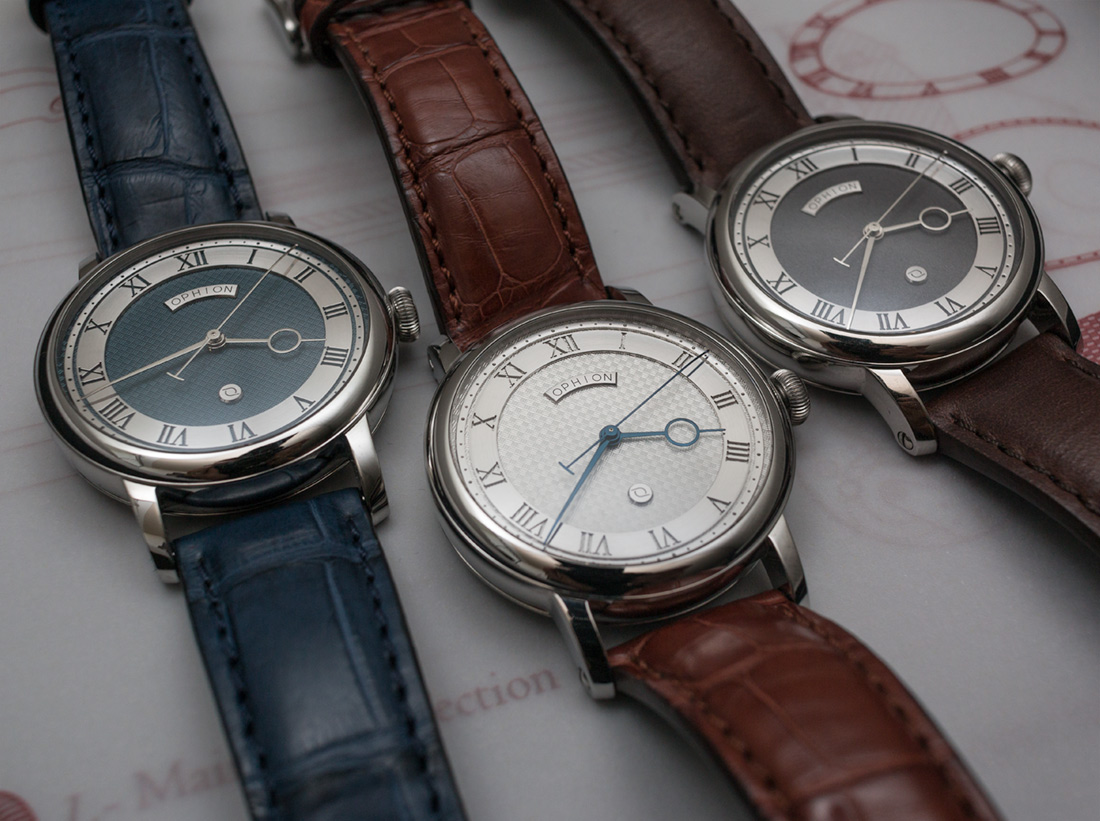 Ophion’s first watch was the OPH 960 that we reviewed here, and we announced the Ophion OPH 786 here in 2017. The brand’s stated mission is to pay homage to watchmaking trends of different eras, and although that sounds like a familiar approach, Ophion applies this idea in an impressively holistic and, in my opinion, pretty novel way. The OPH 960 specifically referenced watch characteristics from the 1960s, while the Ophion OPH 786 takes its name from Breguet watches that began using guilloche-decorated dials in 1786. These are not meant to be recreations of specific watches, but rather based on certain design features. Ophion has implemented that theme throughout the entire watch, including the movement design and decoration for the OPH 786, and we’re not merely talking about a custom rotor or the like—but more on the movement later. 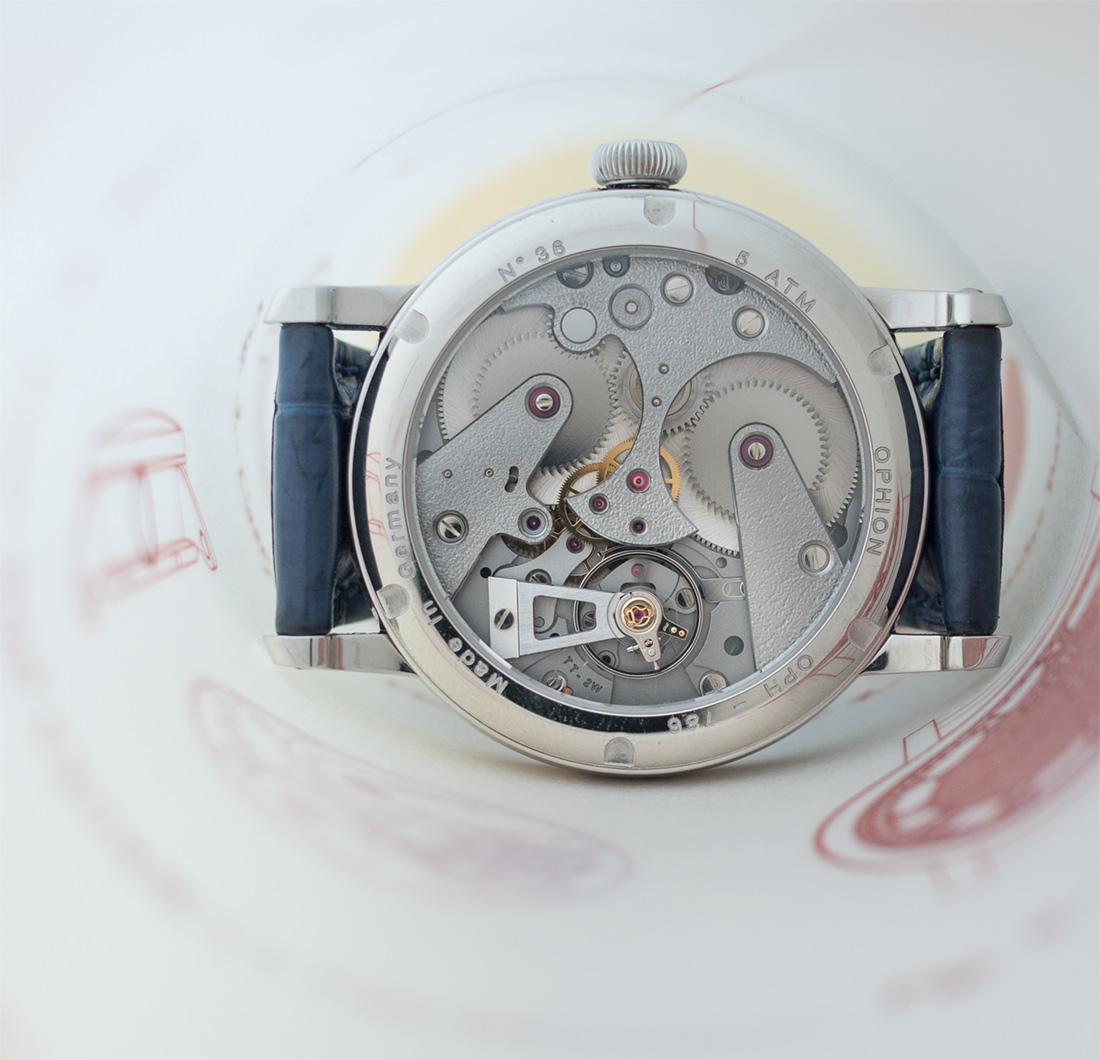 In some ways, it’s a familiar picture: a passionate watch lover founds a small brand, sources parts and labor from suppliers all over the world, and seems to offer far more value for the money than the big brands. “All over the world” might sound like a couched way of referring to inexpensive production based in China and/or mass-produced movements from Japan, and though that is indeed the case for many microbrands, not so for Ophion. I don’t want to get into an entire discussion here about watches’ origin countries, but by sticking only with European partners, Ophion has, at the very least, clearly not taken the cheapest route. 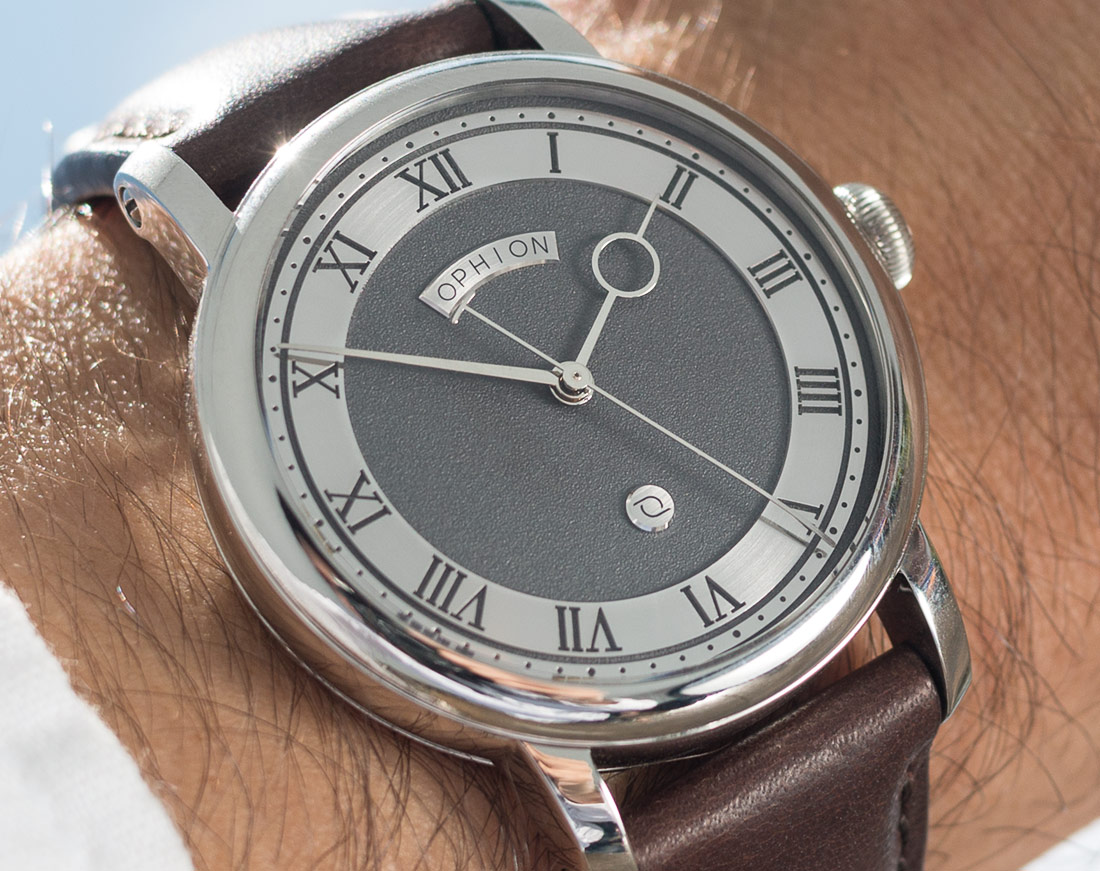 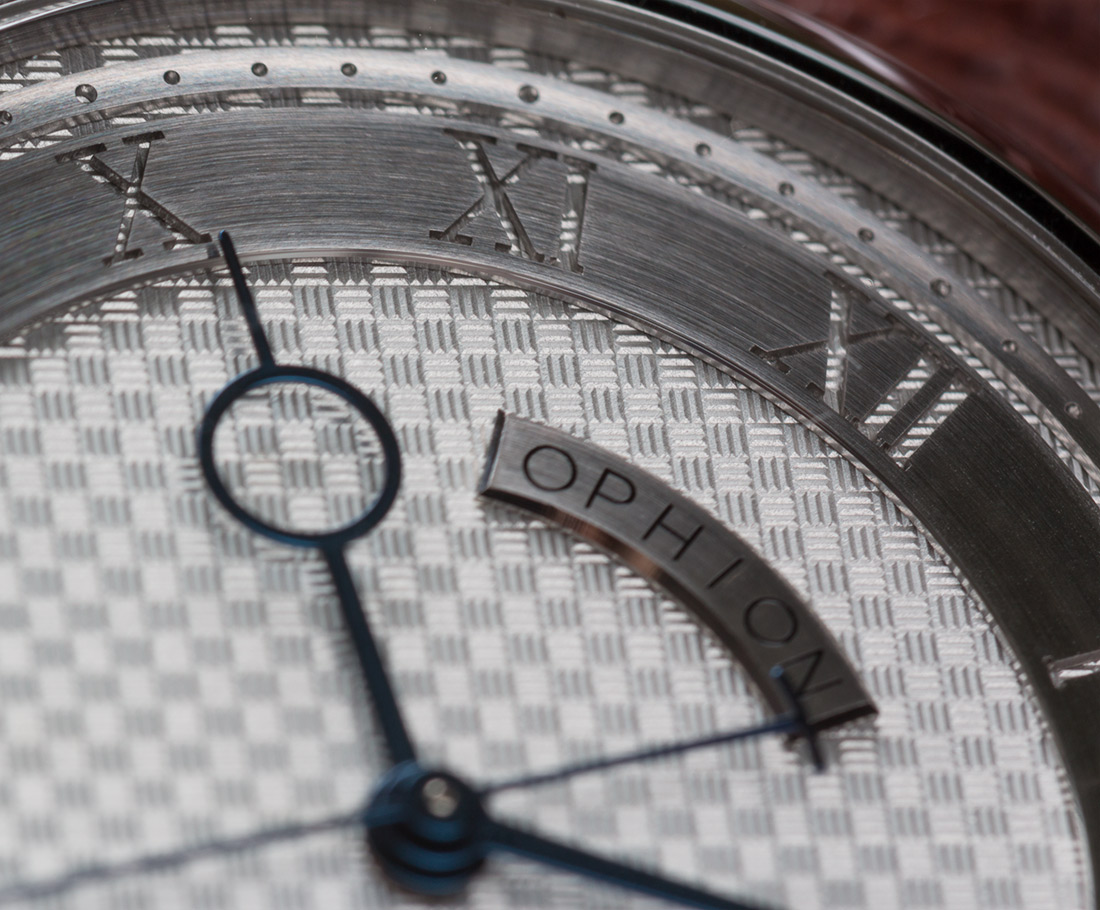 Ophion uses movements and hands from Switzerland, while cases, dials, and assembly are from Germany. Meanwhile, the founder is from Spain, as are the straps and packaging, and the headquarters is in Madrid. Miguel Morales Ribas is, first of all, one of the nicest guys you will meet, with an infectious enthusiasm and the the kind of personality that makes it easy to support his company. I love that Ophion’s branding and marketing (mostly limited to its website, which is still slightly rough around the edges) focus on the watches without some fluffy backstory or “heritage” nonsense, allowing the products to speak for themselves. Miguel doesn’t really offer his personal story unless you ask for it, but his background in architecture does help to explain his design ability. 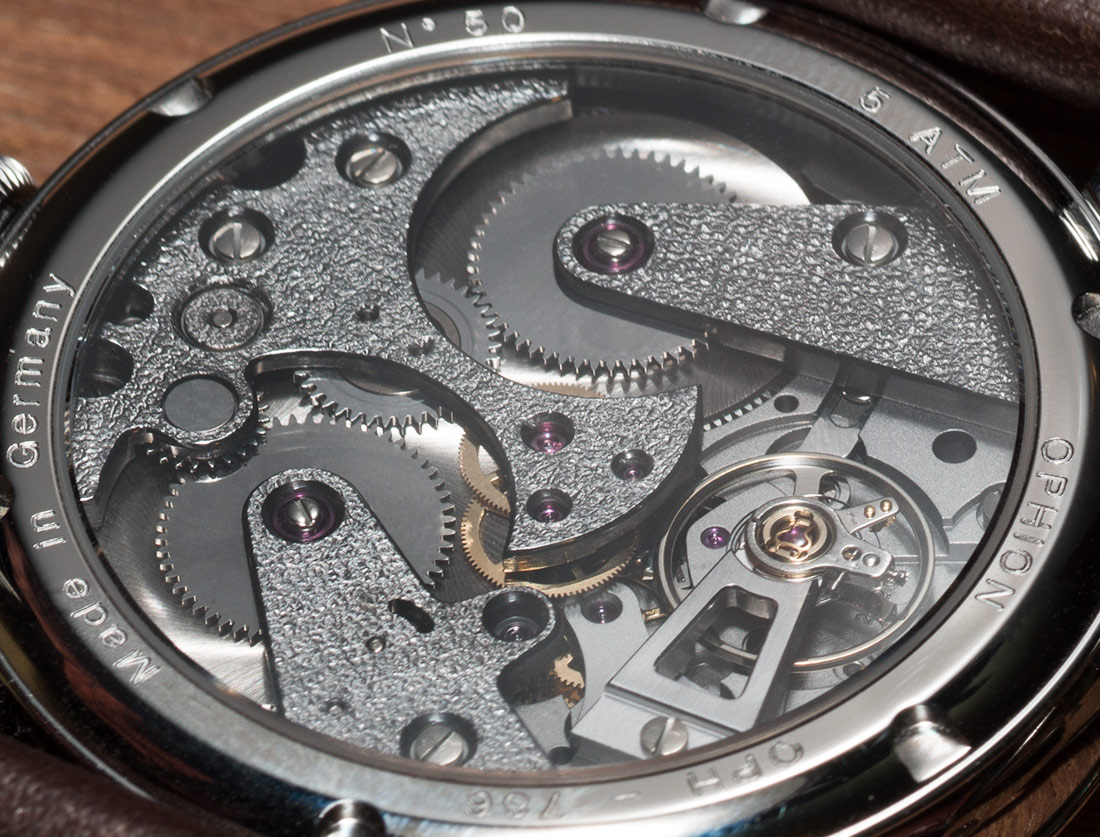 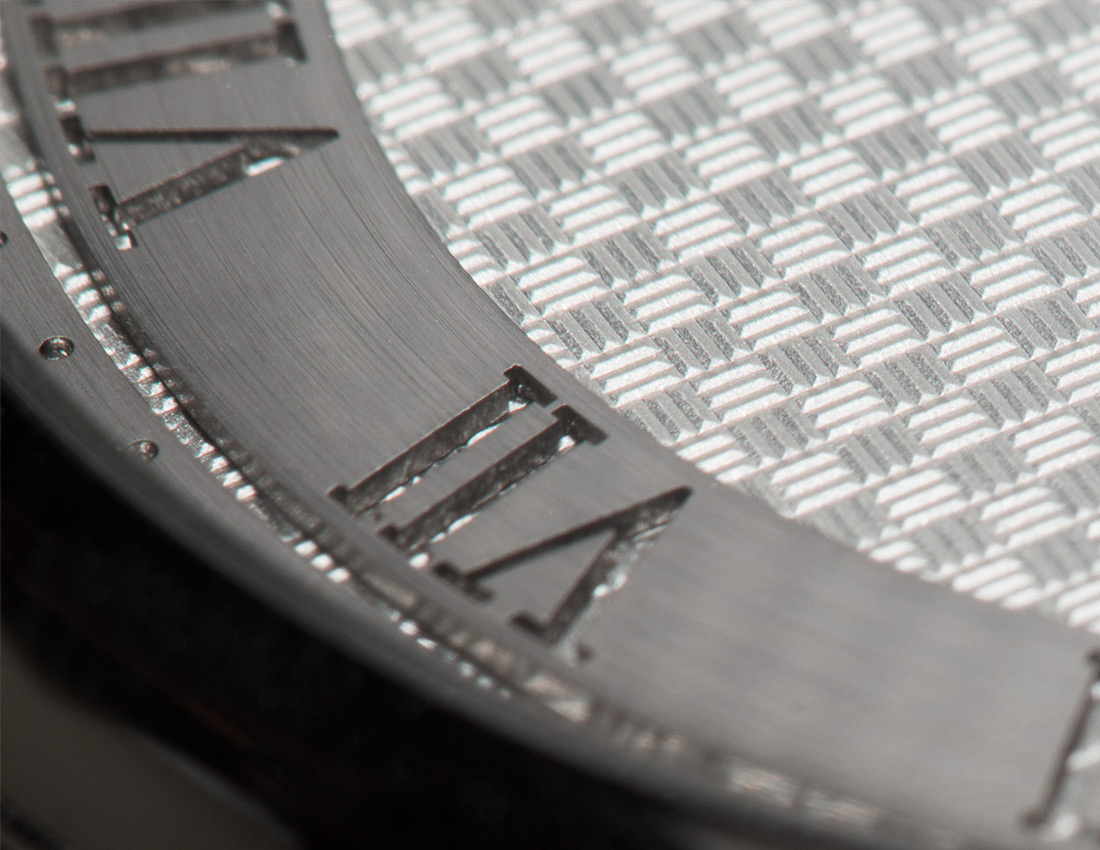 Essentially every piece of the Ophion OPH 786 is designed (or partly redesigned, in the case of the movement) by Ophion, with the straps’ buckle being the only part that’s completely off-the-shelf. The brand particularly emphasizes the guilloche dials of the OPH 786, so that’s a good place to begin. I believe that the original and strict meaning of guilloche refers specifically to patterns, often with an interwoven appearance, engraved using a rose engine lathe, as observed here at Breguet. Nowadays, the term has been broadened to similar textured patterns found on everything from architecture to paper currency (where it is meant to help prevent forgery). 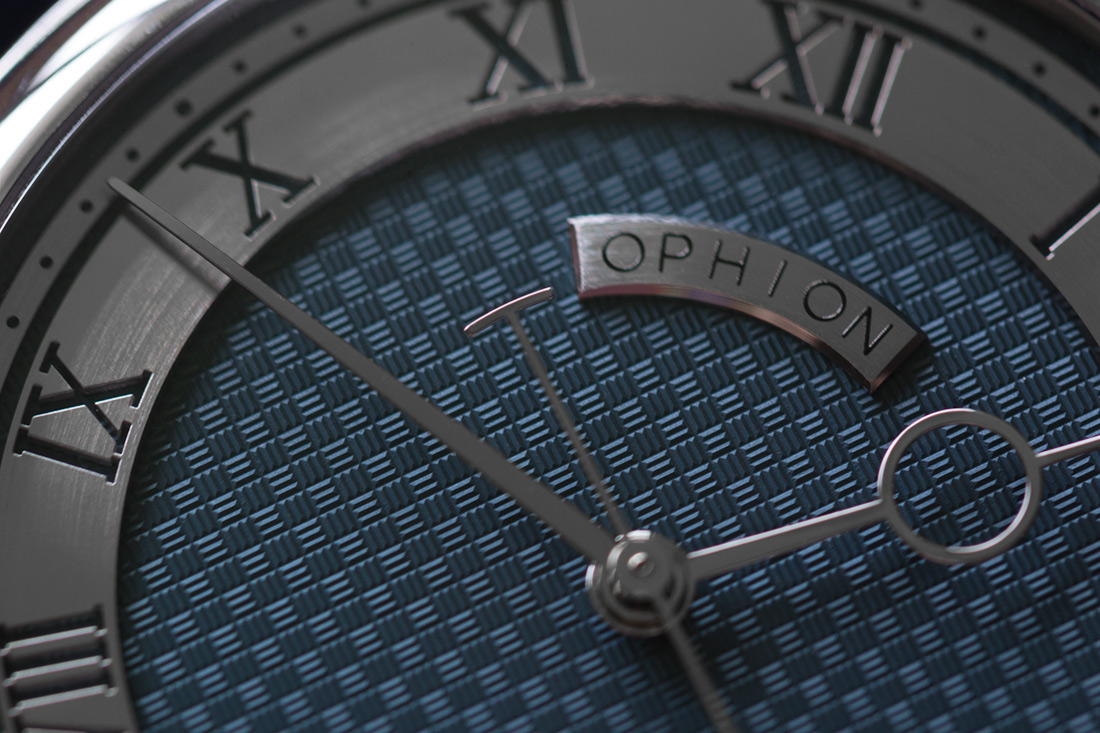 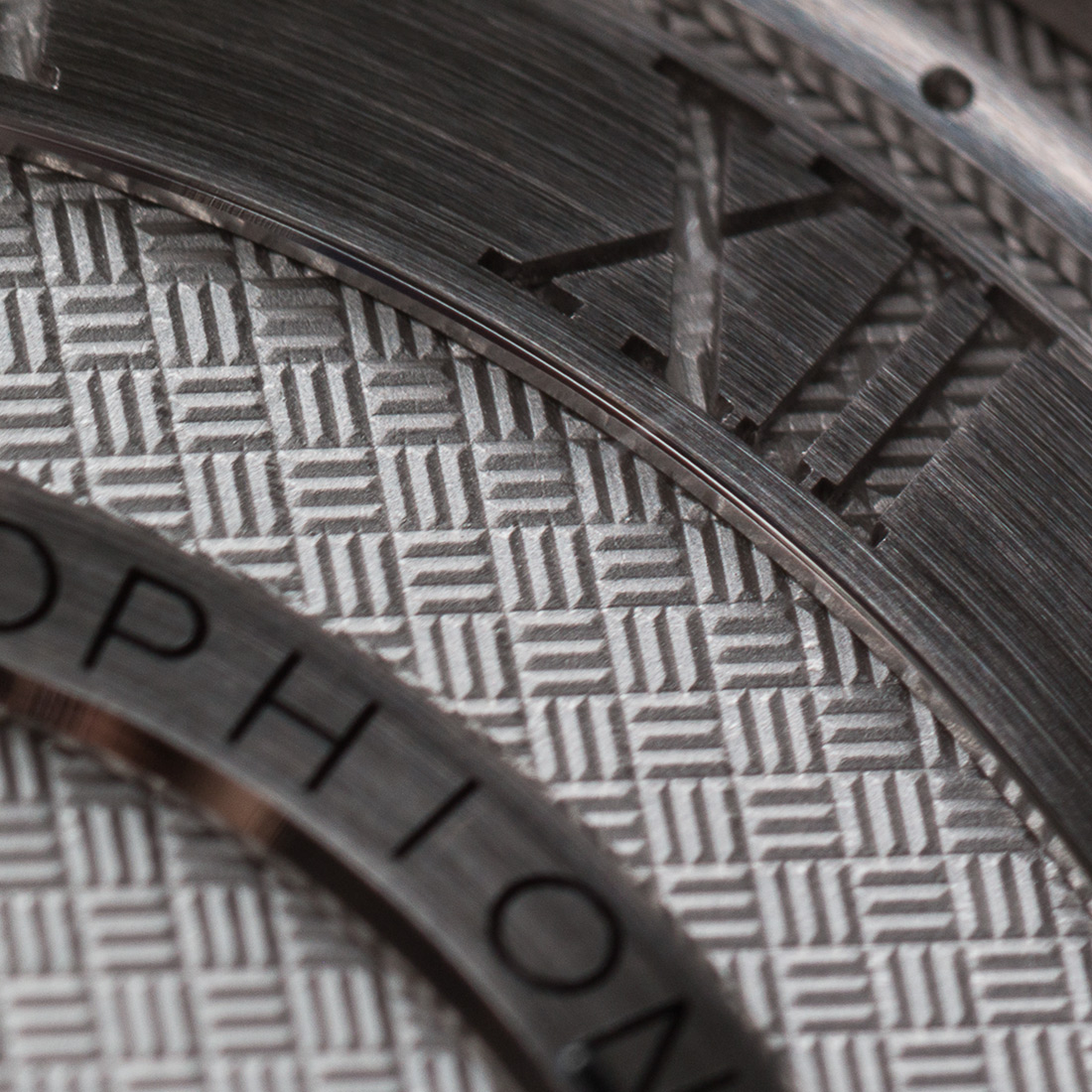 There are a number of ways to achieve the guilloche effect on watch dials, and one of the most common is stamping. The weave-like pattern of the Ophion OPH 786 dial is produced by CNC machine, however, which means the pattern is indeed cut into the dial—evidence of which can be seen under a loupe or macro lens. According to Ophion, this more expensive process achieves superior results when compared to stamping, as the former can create deeper lines. Miguel confessed to me that prices had to be raised slightly after the first batch when the dials turned out to be more costly than original estimates. 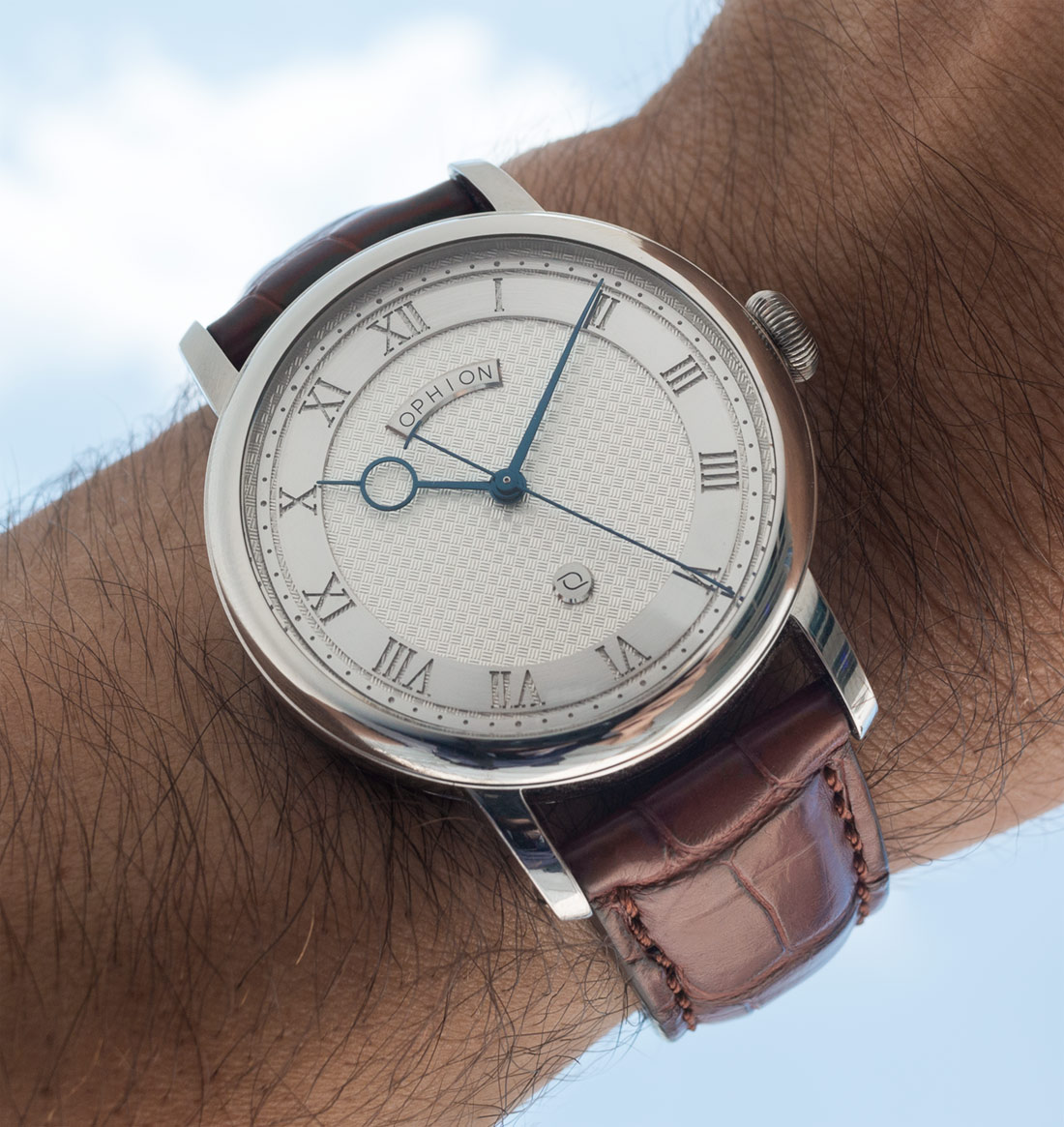 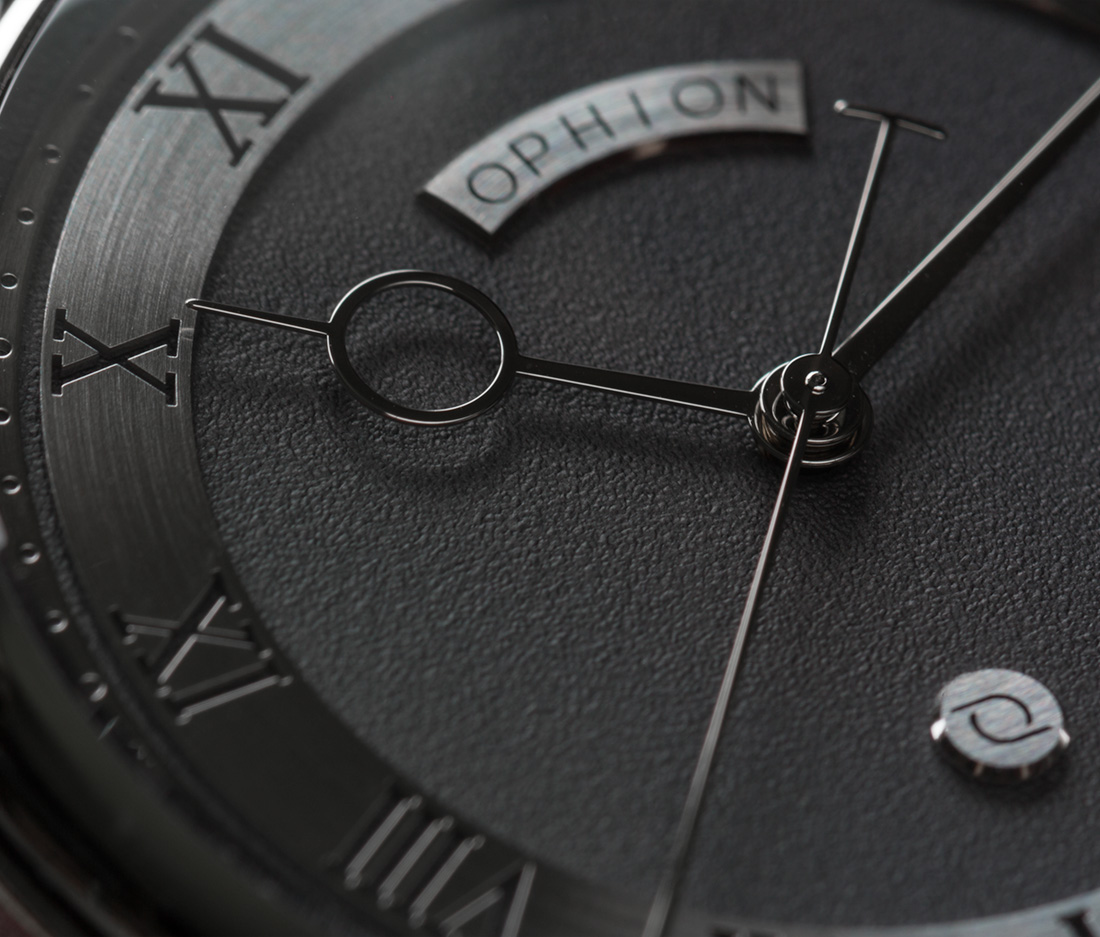 The Ophion OPH 786 has three different dial variations: guilloche silver, guilloche blue, and “granular gray.” Each of the three dials actually have quite different looks and achieve a lovely range of visual effects in different lights. While a more “familiar” look than the other two, I ended up preferring the silver because of its sheer contrast and legibility, even though I was initially most excited about the blue guilloche. In general, shiny hands against a dark dial can almost seem to disappear if they reflect something dark, especially in low light, and that phenomenon occurs regularly with the blue and gray dials. The importance of easy legibility to the longterm enjoyment of a watch cannot be overstated, in my opinion. 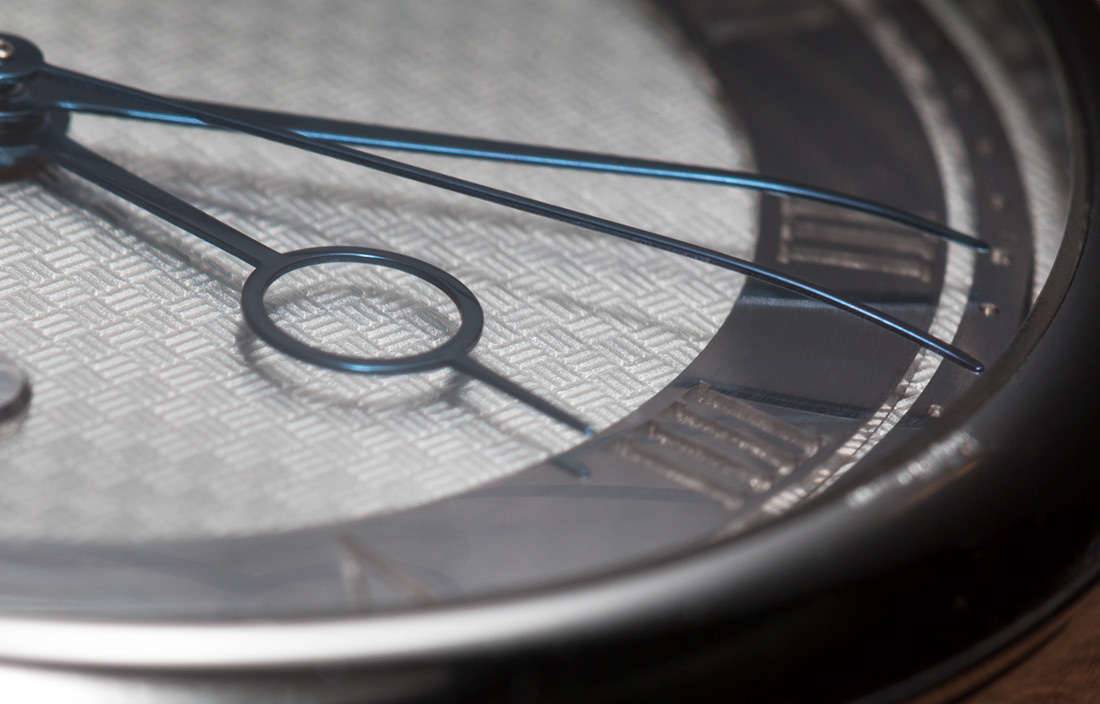 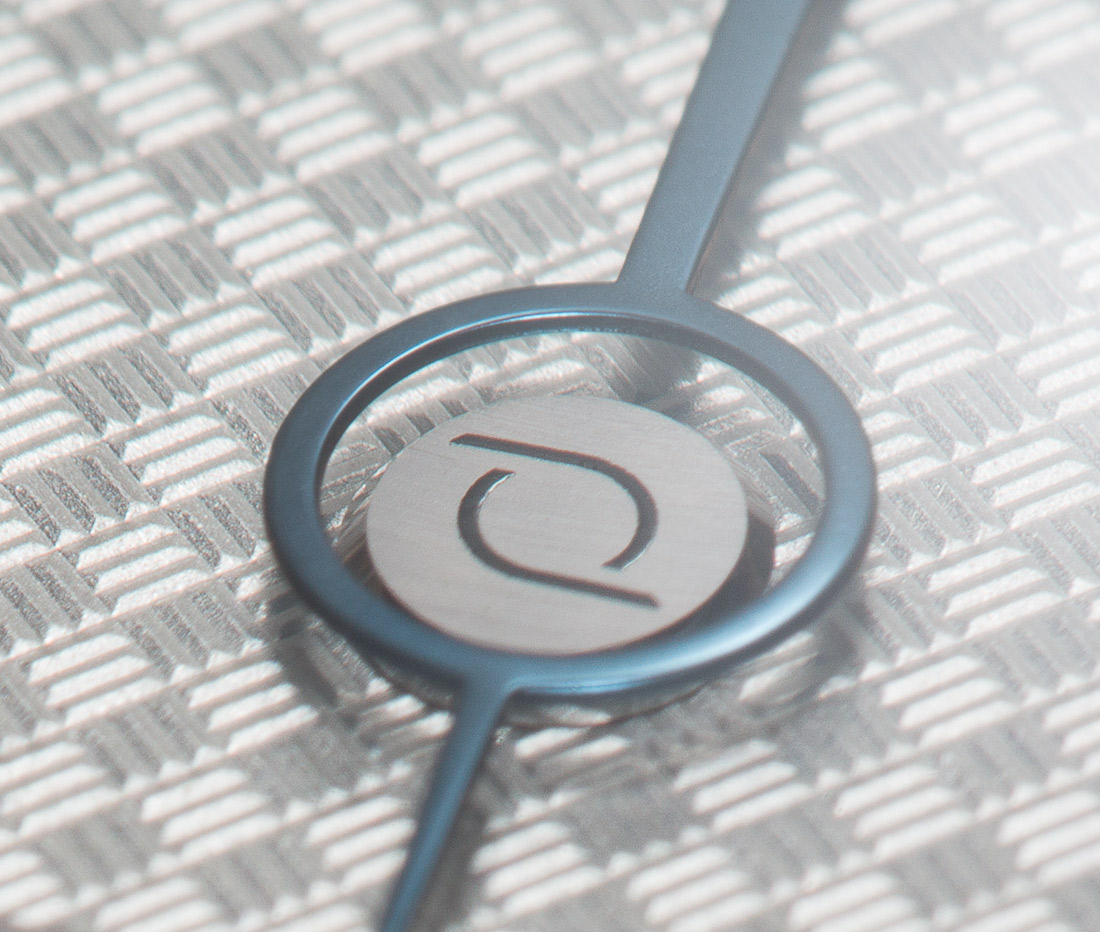 Produced in Switzerland, the hands of the silver dial version are thermal-blued, while the other two versions have nickel-plated hands. The hour hand has a large loop while the minute and seconds hands are needle-like, giving the dial a distinctive but traditional look. Note how the minute and seconds hands curve down subtly at their tips. Though this style of hands (“observatory hands?”) can be found on older watches as well as some recent ones, such as those from Urban Jürgensen, it remains relatively uncommon. The hour hand’s loop perfectly frames the applied Ophion logo when it passes over it at 6 o’clock, and the “T” of the seconds hand’s long counterweight seems to underline the applied “Ophion” wordmark at 12 o’clock. Each of the hands precisely reaches their respective markers or edges, and the seconds hand stretches confidently right to the edge of the dial, which I love. 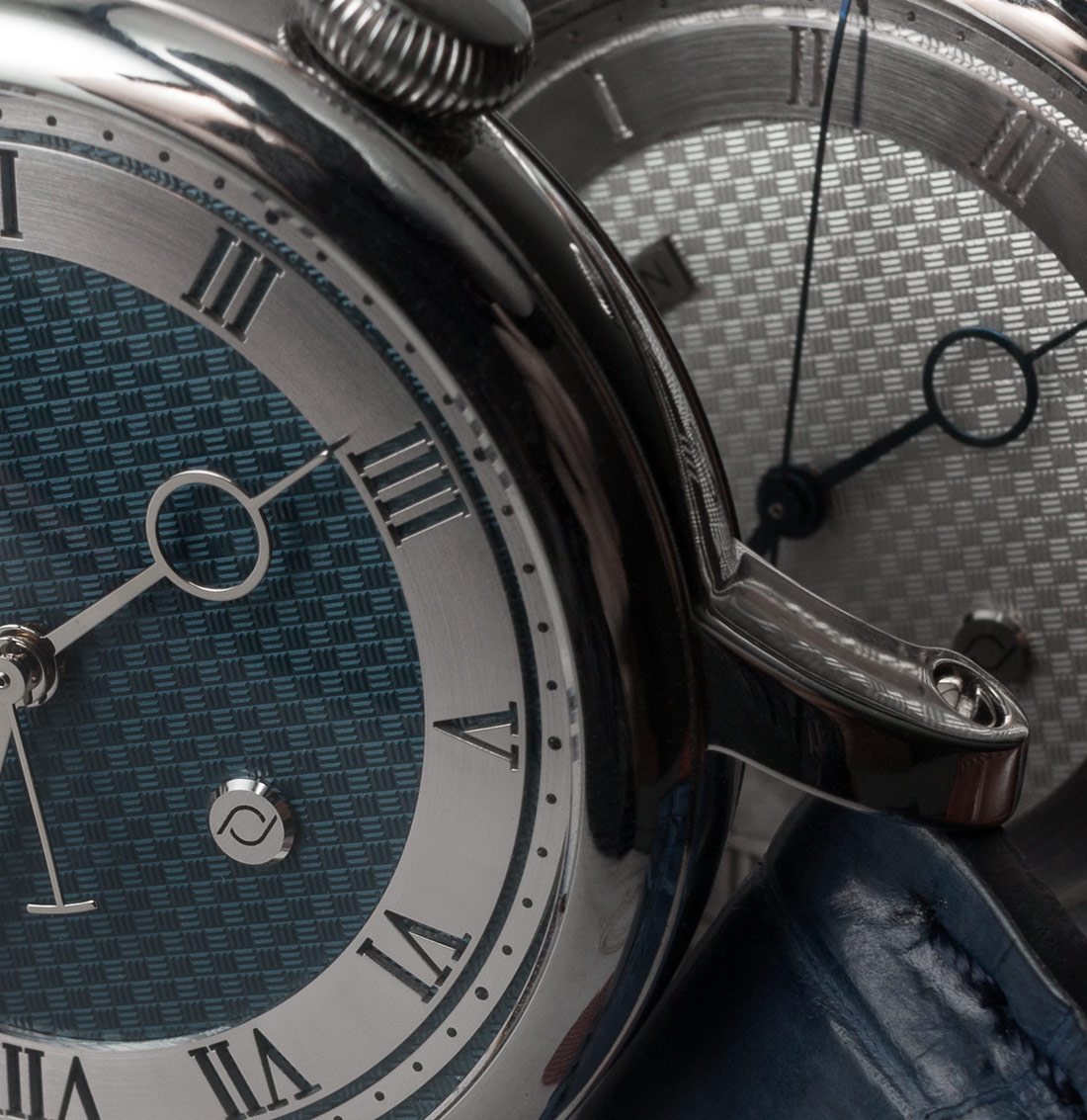 One of the first things I looked for when seeing the Ophion OPH 786 in person for the first time was the finish on the applied chapter ring’s edges. This was something I had wondered about since seeing the release renders, as it would be an indicator to me of the watch’s overall level of quality and attention to detail. It is indeed polished, as hoped for, and it’s easy to imagine a lesser brand overlooking this small but important part. The steel chapter ring is brushed on top with cutout Roman numeral hour markers around it, and it’s further surrounded by another very thin ring with 60 tiny holes for the minutes/seconds, with every fifth hole slightly larger. These rings are both applied on top of the textured part of the dial, so you can see the pattern continue through the cutout spaces and right to the edge of the dial. Needless to say, the dial finishing plus the multiple applied elements provide plenty of three-dimensional depth and visual interest for the wearer, but that’s only half the story.